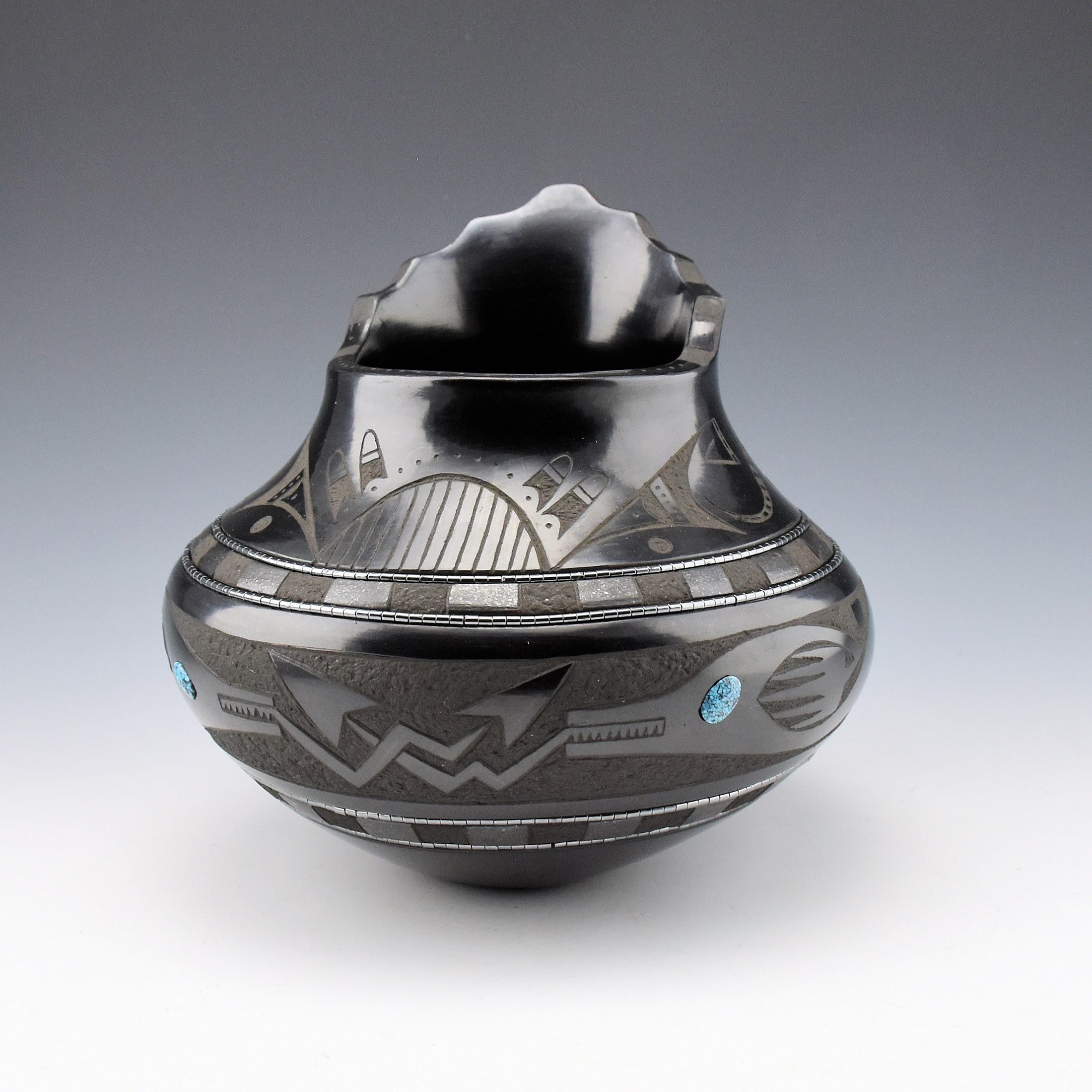 On August 11, 2019, the San Ildefonso Tewa Women’s Club will host the opening San Ildefonso Pottery, 1600—1930: Voices of the Clay at the Museum of Indian Arts and Culture (MIAC) from 12:00 p.m. to 4:00 p.m. Events include a Pueblo feast, celebration, and performances exemplifying the exhibition’s narrative, presented from the Pueblo’s perspective for the first time in San Ildefonso’s history. In illustrating portions of that narrative, co-curator Russell Sanchez (San Ildefonso) fired a pot on July 15, 2019, relaying histories behind his work. 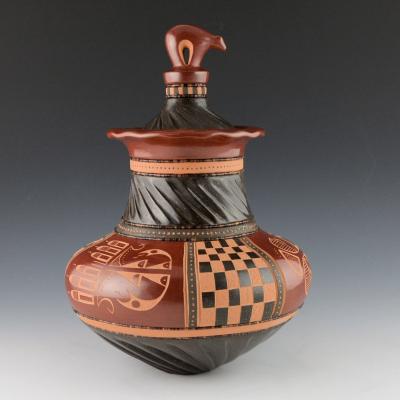 When Sanchez, an accomplished potter and avid art collector, won the Governor’s award for pottery in 2017, he described the work of San Ildefonso potters as an innovative source of creativity. Cultivating his practice since childhood, Sanchez has spent much of his career learning from community members and tracking the technical and stylistic changes used throughout the last few centuries. These processes are one of the many narratives explored in MIAC’s exhibition. Curators not only exhibit San Ildefonso’s creative history but also many works from the museum’s archives that have never been viewed by the public.

Before Sanchez’ demonstration, he described the early stages of his creative process which, broken down into the least nuanced description goes something like this: He gathers clay, breaks it down, cleans it, and prepares it into a workable consistency. Sanchez then makes a base upon which he hand-coils the clay, taking three days with pauses between each change in structure; if he works too quickly, the structure can shrug, compromising the integrity of the finished pot, or collapse completely. When finished, Sanchez lets a piece sit until he says it’s ready for design.

The particular piece Sanchez fired during the demonstration tops in spout shaped to represent mountains and will be inlayed with turquoise and hematite—an addition he says could be described as contemporary. However, the thin hematite beads he plans to use resemble those from attire worn during dances at San Ildefonso Pueblo. Everything leads back to itself, evoking a phrase he uses when discussing the philosophy behind centuries of San Ildefonso pottery: Take what came before and make it your own. 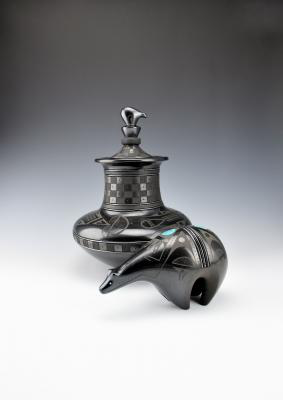 The firing process followed specific steps in the beginning stages. Sanchez and his assistant of three years, Derek Hunt, created a firing surface from a metal grate and tin before placing a metal cage around the piece. They layered dry cow patties over the cage, which tempers the flames and controls the heat required for the desired effect. Once the heat has reached its peak, the process deviates depending on which style Sanchez intends on creating. He and Hunt suffocated the flames, pouring a mix of dry manure over the pot and cage, surrounding the piece with smoke and turning it a dark, metallic black. Sanchez said depending on how he conducts the firing, he can create seven or eight different styles, based on techniques used throughout San Ildefonso’s history.

While waiting for the smoke to complete the firing process, Sanchez discussed other elements of San Ildefonso’s practices, including using specific materials. One such material looked to be a deep, almost wine-colored red that cannot be found without understanding Tewa. This exemplifies the many aspects of the Pueblo’s work that would disappear from institutional narratives if only evaluated by outside eyes.

“You can’t tell someone to drive down a state road or a take a certain turn off,” Sanchez said. “She [a woman from the Pueblo] told me about it in Tewa, and that’s how I figured out where it was.” 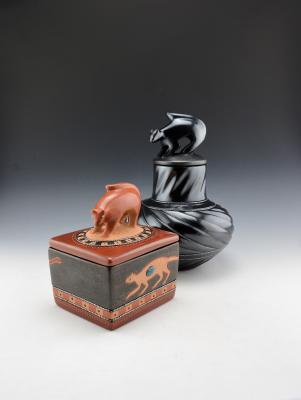 “The lesson from Russell’s recent works in clay is that Pueblo pottery from the last 100 years is not, as perceived, a limiting or restrictive factor for artistic creativity.”

As Sanchez considers the potters before him as well as his contemporaries, he views their work as part of a larger practice comprised of induvial artistries where “[b]rush strokes are like fingerprints.” In winning the Governor’s award in 2017, Sanchez identified his goal as “[g]iving recognition to the potters of the past and carrying on their work.” He accepted the award with a theme that speaks through the exhibition:

“We are part of a living tradition.”

San Ildefonso Pottery, 1600—1930: Voices of the Clay, will be on view until August 31, 2020. The exhibition is a joint project of the Coe Center for the Arts and is supported by Al Anthony and the Adobe Gallery.

Location: Milner Plaza and the Museum of Indian Arts and Culture

Tickets: This event is free with museum admission