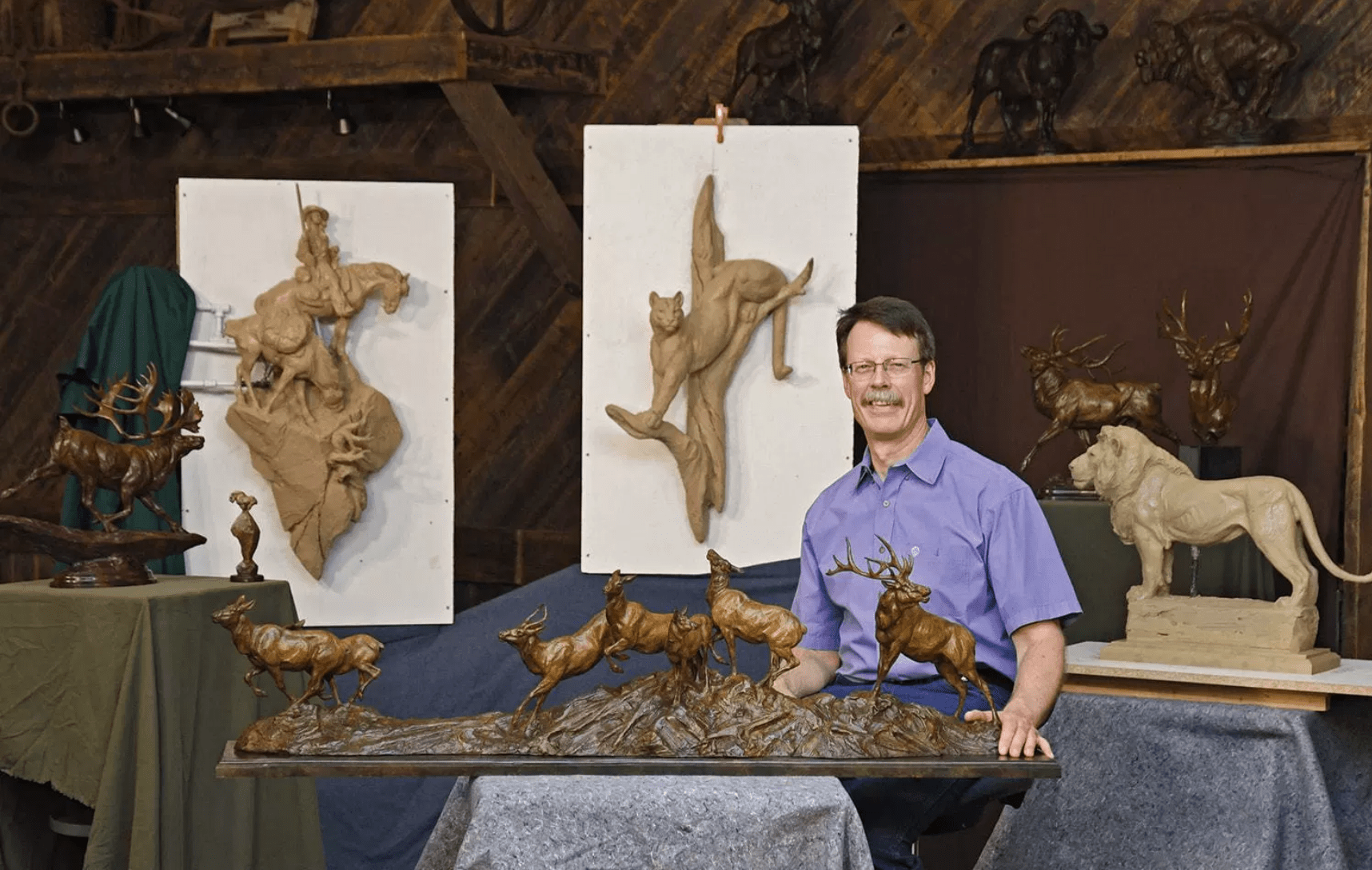 Unbounded in bronze, free within the sharp-angled landscape, deepened by a flight-or-fight instinct, Tim Shinabarger’s sculptures never slip the knot of biology or the loose netting of time. Each piece bespeaks a narrative of the wildness of things and of a grace in the forms of nature.

“I don’t want to lose the feeling that this is a sculpture made out of clay,” Shinabarger says, standing in the foundry where he spends one week a month working on his newest bronzes. “I want that hand-feel of clay in the finished piece.”

“ALONG THE HOBACK” BY TIM SHINABARGER

It’s this signature style, one that’s rooted in detail and a fine-tuned skill set, that Shinabarger approached his newest works for the upcoming one-man show Forever Wild at Legacy Galley in Jackson Hole, Wyoming, from September 14 to 23. Shinabarger worked

for 18 months to create the nine new works for this show.

In creating these new pieces, he worked on all of the sculptures simultaneously, creating a body of work that serves as a reflection of his even more honed-in style. “Working on them all at once, I was able to work on a piece and then come back to it weeks later with a fresh eye, which I find really helpful,” Shinabarger says. “This way, you tend to gestate the work and solve problems faster while they morph from the initial idea to what they end up being. Having a show like this lends itself to that, and I really like working this way.”

The pieces he created for the Forever Wildshow focuses mainly on his most-loved North American animals, with a couple exceptions. “I tried to make sure there is diversity, different subjects so it has a mixed feel from different experiences over my career,” he says. “I do a lot of wilderness travel, and that’s where a lot of my ideas come from. Otherwise the pieces are not so much related other than the fact that they were done at the same time.”

But they are different, he says, than those in his last one-man show at Legacy Gallery that was held five years ago, as his techniques have become more refined over the years. “I’m continually learning,” Shinabarger says. “The older I get, the more subtleties I notices, and I pay more attention to the subtleties. Compared to the last show, the work is more refined, I take on more complex composition, ideas that are harder to pull off. The bar is always being raised.”

Shinabarger’s sculptures are distinguished by his ability to bring out an authenticity that can only come from knowing how each animal inhabits its environment: how the moose reacts to startle, how a kudu moves in a herd. Shinabarger studies the bone structure, musculature, and native landscape of each animal he works on. “The first thing I do when I design a piece — and every detail is thought out beforehand — is think about the shapes,” he says. “When I was in Zambia looking at the kudu, I watched how they got up on a big anthill to look around. Then I used that information to create a sculpture. I figure out the big shapes then I discover where the little shapes fit in.”

Making his way through the foundry, he stops at a sculpture hanging on the wall. It’s a large crag with three bighorn sheep balanced on top. There is an echo of threes, both in the ratio and the triangular shape of the rock cliff. The patinas on the sheep are much lighter than the outcrop they stand on, something a little different from Shinabarger’s past iterations, something new that reflects his thoughts on painting — another passion he holds dear.

“THE APPARITION” BY TIM SHINABARGER

“For me, no matter what I’m doing, the central theme is always the wilderness,” he says. “That includes the people, the animals, and the land.”

The landscape shows up in all his work: the curve of hard earth supporting a warthog, the dancer-like hooves of an elk loping across an unforgiving ground, an abstract portrayal of wet woods supporting a rutting moose. Each notation is a study of place.

Shinabarger has been with The Legacy Gallery (with locations in Scottsdale, Arizona and Jackson Hole, Wyoming) for 25 years. Legacy Gallery owner Brad Richardson appreciates Shinabarger’s dedication to infuse life and quality in each piece. “Few artists can take a piece of metal and actually create life out of that,” he says. “Tim has that ability.”

When Shinabarger was in high school, he had his own taxidermy business, starting with small animals and moving on to larger ones. It is that kind of intimate knowledge of anatomy that is second nature to him.

Richardson explains that instead of honing in on the details, in some cases it’s the lack of detail,  knowing what to put in and what to leave out, that makes the difference. “He’s so familiar with the animals he sculpts that he’s able to capture their gestures and movement, or the illusion of movement,” Richardson says. “I think that as you walk around galleries in

Jackson Hole, you see a lot of wildlife sculpture, but when you see Tim’s at our gallery and at the National Wildlife Museum, you can tell it will stand the test of time. There’s a quality. We are proud to have had the opportunity to represent him for 25 years, and to watch his work grow.”

At his one-man show five years ago, Shinabarger premiered 10 new bronzes at The Legacy Gallery. The nine bronzes featured this year are unique in that he was able to spend enough time with each one to ensure his standards of quality. “Tim has learned that the way he produces the best art is to be able to spend a lot of time with each piece,” Richardson notes. “He started on the pieces for this show over two years ago, and he’s been able to live with them and make adjustments. So often artists are rushing things out of the studio to make a deadline. With the pattern we’ve created with Tim, he can bring out these large quantities and make each piece the best it can be.”

Shinabarger has won numerous prestigious awards including the Prix de West Invitational Wildlife Award in 2014, and the Prix de West Sculpture Award in 2010. A monumental version of “Black Timber Bugler” was installed at the C.M. Russell Museum in 2017. Shinabarger is excited about the museum’s acquisition. “I was born in Great Falls and my first exposure to any kind of art that I can remember was at the C.M. Russell Museum,” he says.

Walking through the foundry, Shinabarger first stops to visit Con Williams, an artist and sculptor in his own right. Williams is in charge of making the molds, which are stacked on shelves all around the room. The polyurethane molds are made from the initial clay (or wax) sculpture brought into the foundry by the artist. Williams is careful to notice where cuts need to be made on the bigger pieces in order to successfully cast a piece. He paints plastic around the original, then surrounds it with plaster until the polyurethane is set.

“That holds the shape,” Shinabarger says. “And the clay part is done. It can be reused. The polyurethane mold belongs to the artist.”

In the wax room, a model is made by applying four or five coats of heated wax onto the rubber mold, making a positive image of the sculpture. At that point it goes into the wax chasing room, where the wax model is examined for flaws and repaired. Then wax rods are attached to allow the bronze to flow in and the air to escape when the wax is melted out of the shell.

Stopping to talk with two women bent over their wax work, Shinabarger pulls a photo file out to examine the progress so far. A meticulous book is kept for each sculpture.

Next, a ceramic shell is made by dipping the wax model into a sandy slurry. After it hardens, the wax is then melted out, leaving a hollow negative of the sculpture. Molten bronze, heated in a furnace to about 2,100 degrees, is poured into heated ceramic shells. When the bronze cools, the ceramic shell is chipped away. All the pieces are then sent to artisans who chase the metal, using pneumatic tools and welders to make the sculpture whole again. At that point it goes into a sand blaster and finally to the patina room.

Patinas create the colors of the final piece. After the patina has been applied, a coat sealant keeps the color just right. On the wall behind Shinabarger there are dozens of tiles with colors from deep brown to coppery greens and burnt reds. A chemical palette.

“Every time I come here I go through the whole process, find any flaws, and help touch it up,” Shinabarger says, picking up a tabletop sized sculpture. The moose paws at the ground and his enormous antlers angle toward the light. “I also approve all the patinas and I ship from here as well. The rest of the time I’m in my studio and I’m checked out.”

At any one time, Shinabarger has between 20 and 25 pieces in active circulation. Collector Ed Wright first started following Shinabarger’s work more than 20 years ago, and he’s bought at least one piece every year since.

“I collect wildlife art and the owner of The Legacy Gallery introduced me to Tim’s bronze work decades ago,” Wright says. “I dearly loved one of his paintings, which I still love. Then I got interested in his bronze work. I became fascinated by the way he manipulates the clay; I found every animal to be anatomically correct. That appeals to me.”

Wright appreciates the fact that Shinabarger goes out in the field to study his subjects, which he says gives the artist the ability to capture, not just the animal, but the animal’s environment as well. “That’s what turned me on — good work and his being true to the animal,” Wright says. “A lot of artists are studio artists, but he really goes out there to understand the whole picture.”

At the end of the week, Shinabarger returns to his studio near Billings, the softened clay waiting for him. “I used to paint a lot and do field studies when I was thinking about a piece. Now I take a camera, a video cam, and my sketchbook,” Shinabarger says. “After I have an idea, I’ll do anything to get close enough to the animal to really study it. Once I traveled to Anchorage just to watch a polar bear.”

He reaches out, running his hand along one of his pieces with a fresh patina. His fingers follow the impressions he’d made earlier in the clay. Although he’s probably done dozens of figures, each one tells a new story.

“I look at the relationships between bone and muscles, where the animal lives, and what’s going on,” he says. “It’s important for me to get past the main things to see the subtleties. And then, how am I going to create the illusion of movement, and the light to hit in an energized way?”

Without losing the form, and careful not to let the mechanics of the animal overwhelm his work, Shinabarger always keeps the “why” of the piece in the forefront of his mind. Perhaps that’s the reason his sculptures speak to people — those familiar with the animals as well as those attracted by the honesty of the work.

Shinabarger’s one-man show, Forever Wild, is at Legacy Gallery in Jackson Hole, Wyoming, opening with an artist reception on September 14 and running through September 23. Along with the nine new pieces, there will be a select few sold-out editions available by draw, including the sought-after piece Switch Back.