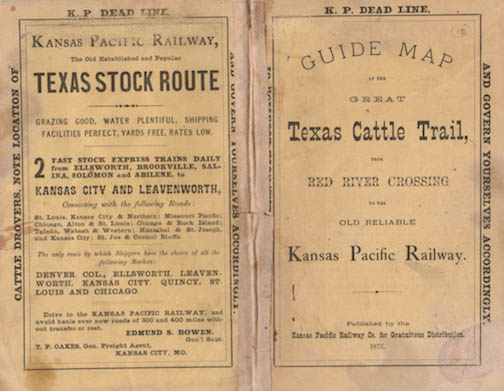 The Sid Richardson Museum will join the three-state (Texas, Oklahoma and Kansas) 2017 celebration of the 150th anniversary of the Chisholm Trail. “Hide & Horn on the Chisholm Trail” will run from Friday, January 6, 2017, through Sunday, May 28, 2017. Visitors will view rarely seen items from the cattle trail era in the Sid Richardson Museum’s permanent collection and “Guests of Honor” on loan from the Rees-Jones Collection in Dallas and from another private collection. This focus exhibition will be on display concurrently with the museum’s current exhibition, “Legacy,” which depicts the clash of cultures of the 19th century American West. Admission is free to the museum at 309 Main St. in Sundance Square in downtown Fort Worth.

According to the Texas State Historical Association, after the Civil War, the growing demand for beef was supplied by Texas Longhorn cattle. Sturdy and able to graze on whatever plant material was available, the breed was particularly suited to cattle drives. From the feeder trails in South Texas across Indian Territory (Oklahoma) to railheads in Kansas, the trail was the major route out of Texas for livestock. The market provided a steady source of income for Texas ranchers. In its brief existence, it had been followed by more than five million cattle and a million mustangs, the greatest migration of livestock in world history. The Trail was named after the Scot-Cherokee trader Jesse Chisholm.

“Predating the arrival of the train and discovery of oil, the Chisholm Trail era was an indispensable, early chapter in Fort Worth’s history,” said Mary Burke, director of the Sid Richardson Museum. “Being a waypoint along the trail spurred the city’s early growth and helped define its Western heritage, which even today differentiates Fort Worth from any other city.”

About the Rees-Jones Collection in Dallas

2) “The Best and Shortest Cattle Trail from Texas,” by Kansas Pacific Railway Company, St. Louis, Missouri: Levison & Blythe, 1873, Rees-Jones Collection. The railway used trail maps and guidebooks to lure cattle drovers from the shipping centers of rival railroads by highlighting its availability to routes of the cattle trails. This lithograph map on banknote paper, measuring 22 ¾” x 16 ¾”, recommends cattle routes to be followed by ranchers to market their beef, stretching from points in Texas (commencing at its southernmost points from “King’s,” and Corpus Christi at the Gulf of Mexico), north to Kansas railheads (terminating at Ellsworth, Russell, Fort Hays, and Ellis) with rail lines leading to western points such as Denver, Colorado. The map shows parts of the Indian Territory (now Oklahoma), Arkansas Territory, Kansas, Colorado, and New Mexico. The longhorn steer with the Kansas Pacific Railway’s name on a banner spanning its horns, and the title of the map on a Texas lone star badge hanging from a ring in the steer’s nose, underscores the map’s publicity function.

3) “Historical and Biographical Record of the Cattle Industry and the Cattlemen of Texas and Adjacent Territory,” by James Cox (1851‒1901), Saint Louis: Woodward & Tiernan Printing Co., 1895, Rees-Jones Collection. As one of the most important factors in the social and economic development of a large portion of the United States, the cattle industry generated a wide variety of printed material. One of the “big four” (the four most important books on the cattle industry), this book offers a comprehensive early range history and is a cornerstone of any range library.

4) “The Longhorns” by J. Frank Dobie (1888‒1964), Boston: Little, Brown & Co., 1941; inscription by Dobie to Sid Richardson, March 12, 1942, Sid Richardson Museum.  Considered to be one of the best accounts of the traditions of the Texas Longhorn cattle breed during the 19th century, this book illustrated by Tom Lea describesthe roots of the Texas Longhorn. Sid Richardson enjoyed a warm friendship with the American folklorist; Dobie, at Sid’s invitation, used Richardson’s island ranch as a writer’s haven in 1939 when he wrote the book. Each print edition opens with a dedication to Sid, and each of the twenty chapters is dedicated to a significant individual in Dobie’s life. Dobie wrote a personal inscription in Richardson’s copy of “The Longhorns” and “branded it” in the upper and lower left corners. Dobie aided Richardson in his mission to preserve the Texas Longhorn by selecting a herd to be purchased by Richardson and finding placement for the Longhorns in Texas state parks. The herds were later consolidated and moved in 1948 to Fort Griffin State Park. Today, Fort Griffin State Park maintains the Longhorn herd.

5) “The Texas Steer” by Charles M. Russell (1864‒1926), Roman Bronze Works, New York, private collection. In 1925, Russell created a reclining longhorn in plaster to give as Christmas gifts to friends; he gave each longhorn distinctive horn shapes and painted it in a variety of colors. After Russell’s death in 1926, several of the plaster versions were cast in bronze with permission from his widow. The casts continued to be fabricated into the mid-1970s.

“Hide & Horn on the Chisholm Trail” will be on display concurrently with the Sid Richardson Museum’s current exhibition, “Legacy,” which depicts the clash of cultures of the 19th century American West. The legacy of conflicts among cowboys, soldiers, explorers and Indigenous Americans during westward expansion continues to impact America today. The exhibition also celebrates Sid Richardson’s legacy of philanthropy and collecting art. The exhibition features 42 of the Museum’s dynamic paintings of the 19th century American West by Frederic Remington (1861-1909), Charles M. Russell (1864-1926) and their contemporaries, along with three bronze sculptures by Remington and Russell and one Russell painting on loan from a private collection, and Sid Richardson’s 1947 Edward H. Bohlin Company leather and sterling silver parade saddle.

Oil, cattle, and land formed the basis of Sid Richardson’s lifework, and the Sid Richardson Museum is part of his legacy. His love for Western art grew out of his ranching experiences, which provided him with vivid impressions of the American West. He acquired the majority of the paintings in the collection, numbering more than 100, between 1942 and 1950. He became an avid collector of the works of Remington and Russell because he thought they captured, better than any other artists, the vitality, color, and motion that he had always associated with the West.

About the Sid Richardson Museum

Established in 1982, the Sid Richardson Museum features paintings by Frederic Remington and Charles M.Russell of the 19th century American West during westward expansion. The legendary Texas oilman and philanthropist, Sid W. Richardson, amassed one of the most significant private collections of Remington’s and Russell’s in the United States. In addition to 23 paintings by Remington and 52 paintings by Russell, his collection includes works by other “old masters” of Western art: Oscar E. Berninghaus – a founding member of the Taos Society of Artists, Charles F. Browne, Edwin W. Deming, William Gilbert Gaul, Herbert M. Herget, Frank Tenney Johnson, William R. Leigh, Peter Moran and Charles Schreyvogel. These artists captured the romance and ruggedness of the western United States in the late 1800s, a time when most Americans had little firsthand knowledge of the frontier.

Admission is free to the museum, which is open daily except for major holidays. The museum offers free publiceducation programs for children/families, teens, and adults. Docents lead free public gallery tours each Tuesday and Saturday at 2 p.m. Group tours are by appointment only. On the Second Saturday of each month at 3 p.m., the gallery tour is followed by a live performance of a docent portrayed as Nancy Cooper Russell, wife of Charles M. Russell, telling stories about his career. Free valet parking is available in Sundance Square. The Museum Store has unique Western-themed items. For information, visit the website or call 817.332.6554.