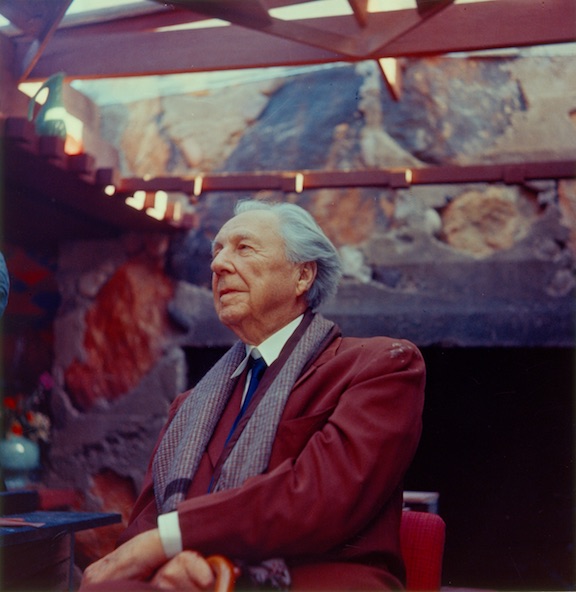 The reality of the building does not consist of roof and walls but in the space to be lived in. —Laozi

One hundred and fifty years after the birth of Frank Lloyd Wright his full life still fills ours. The achievement of the architect, writer and teacher stirs us, stimulates us with passion, vision and fire. His work and words quiver with possibility, reaffirming what our homes, offices, stores, religious buildings, bridges and cities can be.

“That legacy derives from a central thesis, with various corollaries. That is, we need to rethink the relationship between the human-built and the natural worlds,” says Victor Sidy, dean of the Frank Lloyd Wright School of Architecture from 2005−2015, and now principal of Victor Sidy Architectural Research & Design in Phoenix. “For him, especially in his later work, architecture had moved beyond sticks, brick and mortar; it had become a rhetorical device investigating how to live closer to the environment and in harmony with the natural world through the artifice of our creations. His projects are vibrant testaments to those ideas, and his Arizona architecture, in particular, exemplified the relationship between the built environment and natural landmarks signature to the desert.”

Wright died in Scottsdale on April 9, 1959, and the later part of his life was devoted, in part, to designing homes in Arizona, away from the brutally cold Wisconsin winters. With a shared commitment to common materials, Arizona light and the unique angles and flow of the land, they are an eloquent expression of the beautiful harshness of the Sonoran Desert.

Affirming a continuity of inspiration and achievement are three homes in the Phoenix/Scottsdale area by him and inspired by him: Wright’s late Harold C. Price Sr. House (1954); apprentice Vernon D. Swaback’s Skyfire (1997) and the Rosenthal Home (2005), designed by architect Gustad Irani, who was mentored while a student at Taliesin West by another Wright apprentice, John Rattenbury.

Price House: Design of the Desert

The Prices, fellow Midwesterners, were one of Wright’s favorite clients. The family commissioned him for a winter getaway in Paradise Valley as well as a year-round home for Harold Price Jr. in Bartlesville, Oklahoma, where Harold Price Sr. had made his fortune pipelining oil.

Delivered in 1955,, the 5,500-square-foot home, Wright’s largest in Arizona, extends along 8.8 hillside acres toward the Phoenix Mountain Preserve. Monikered “The Grandma House,” the seven-bedroom, seven-bath home accommodated the Prices’ six grandchildren on their visits from Oklahoma, and in 1957, a larger master bedroom was added.

“The Price House is exemplary of Wright’s genius as a home respecting the surrounding environment as well as one that is at harmony with the needs and use of its occupants,” says Sperry Hutchison, Price House Foundation historian.

After three generations of family ownership, the foundation was set up in 2014 to preserve and renovate the house and landscaping in alignment with Wright’s vision. Today, the Price Home welcomes reserved tours and group functions.

“The Price house is uniquely positioned within Wright’s body of work as a unifying figure, reminiscent of his early prairie homes in its profile, constructed of the common elements of the Usonian home, showcasing the temple-like forms of the California ‘romanza’ period, and all the while being a supremely efficient desert dwelling, at home on its rugged mountainside site. The versatile nature of the many indoor/outdoor spaces creates a sense of harmony with the site that is rarely as fluid and natural as it is here,” Hutchison says.

Forward-thinking passive cooling takes place beneath the extended southern eaves; the windows frame brilliant desert views while providing ventilation; and the mahogany doors, designed by Wright’s talented secretary, Eugene Masselink, allow the atrium space, with its fountain and floating ceiling, to be opened or closed to the outside, depending on weather.

“In his desert homes, Wright was trying to find a balance between simplicity and intricacy and exploring how to build in the desert Southwest to capture its beauty,” Sidy says. “The Price House expresses this beautifully, and its central atrium is certainly one of our great desert spaces.”

Skyfire: Song to the Desert Sun 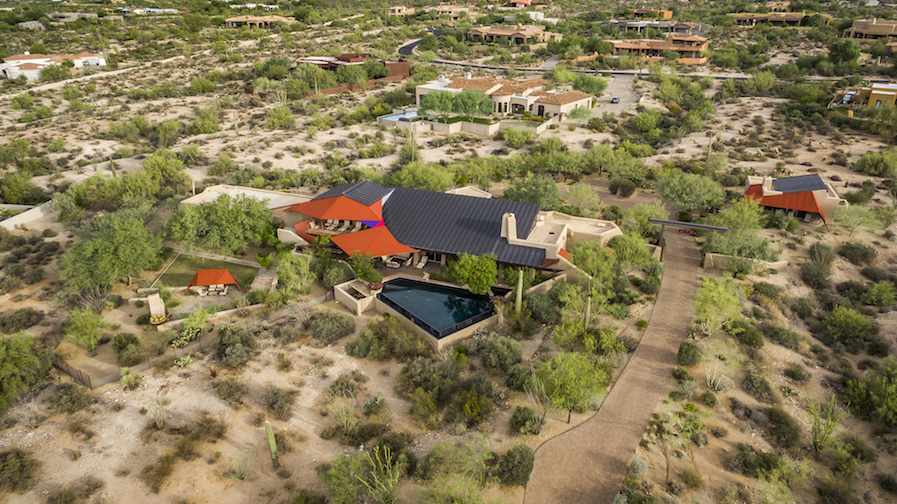 Designed as the year-round home for architect Vernon D. Swaback, one of Wright’s final apprentices at Taliesin West, and wife Cille, the 5,040-square-foot Skyfire home integrates with 1.5 gently sloping acres of lush high desert south of Pinnacle Peak in north Scottsdale. The compound includes a three-bedroom main house with a multi-tiered living room fireplace wall incorporating the 30- and 60-degree angles that Wright saw as characteristic of the Sonoran Desert geology, the architect’s studio, and a kitchen and breakfast area to a loft above. In addition, Skyfire includes a 600-square-foot detached guest cottage abutting a wash, an upper-level exercise loft, a viewing deck with 180-degree views across the Valley and a negative-edge swimming pool.

In keeping with one of Wright’s central principles, Swaback programmed natural materials: thick concrete walls, tinted concrete and wood-plank doors, board walls and ceilings, exposed steel, copper roofs left to patina and canvas canopies — the latter, perhaps, Swaback’s memory of apprentice life at Taliesin West, which had a canvas roof when building first began. Wright’s apprentices, including Swaback, also slept in tents or built shelters to reinforce those natural connections during their stay.

“A convincing bond with its setting, Skyfire is an ongoing dialogue about what it means to live in the desert,” Swaback says, emphasizing that “architecture should inspire a protective, familiar feeling as well as some degree of interaction with the larger setting. The name refers to the early morning view across the pool, the view across the south-facing terrace and the drama of an Arizona sunset,” he adds.

The name also highlights the paradox that the Sonoran Desert sun is both life sustaining and life threatening. “We need to be sheltered from the scorching heat of the sun, while celebrating the gift of living openly under the sky,” he says.

The north-facing clerestory windows are buffered for the early morning by five triangulated structural piers, and the later afternoon sun by the exterior angular wing walls. On the south side, floor-to-ceiling butt-glazed glass is sheltered from the sun by an extended overhanging eave line, and another 800 square feet of covered terraces act as a solar shield.

As with Wright, for Swaback, “The most precious reality of the design is the three-dimensional space to be lived in. Skyfire’s most gratifying achievements are undeniably spiritual.”

The Rosenthal Home: The Geometry of a Humane Architecture

Wright experimented with a geometric themes throughout his career. Here, the roof, with triangular ends, cantilevers over the garden walls, which enclose private xeriscape garden spaces. Inside, this theme was continued by the interior designer, Scottsdale’s Schick Design Group, with triangle zinc inlays in the terrazzo floor and the furniture. The entrance gate and fence, the entrance door, outdoor sculptures, fireplace, indoor frosted glass and hardscape patterns also emphasize the geometry.

The home reveals other Wright influences, for instance, in the repeating fascia design; the large overhangs; the masonry block continuing outside to inside; the clean lines; and the design of the front door, explains Tim Larson, principal of the Scottsdale-based La Casa Builders.

“As with Wright’s work, the home is more about having the architecture stand out and not the designer’s finishes. Frank Lloyd Wright promoted the destruction of the box and the connection of indoor and outdoor spaces. In our first custom home project, we decided to take advantage of what the sunlight had to offer and experiment with forms which create interesting shadows in perpetual motion throughout the day, as the sun rises in the east and sets in the west,” says Irani, who formed the Organic Design Workshop in 2003 when Taliesin Architects was privatized. “The wall masses in the Rosenthal home and the voids between them are designed to carry this play of shadows indoors, giving the inhabitants a unique experience of the daylight forming moving shadows of changing shapes and colors throughout the day.”

Just as important as what Wright designed is what his designs mean for our future. “I believe that Frank Lloyd Wright’s work is even more important today than it has been –– a vibrant guide for us on how to design our built environment for the next 150 years and beyond,” says Swaback.

“Nearly every architect practicing today has been influenced by Wright, whether they followed his path or not. They learned from the attitude that he had about architecture and internalized it: about space, detailing, massing, even landscaping,” adds Sidy.