As one of her first jobs after college, Shan Goshorn was hired by the U.S. Department of the Interior’s Indian Arts and Crafts Board to visually document traditional Cherokee basket weaving patterns. Raised in Baltimore, Maryland, but having spent summers with Eastern Band Cherokee relatives in the mountains of southwestern North Carolina, Goshorn welcomed the opportunity to delve more deeply into her culture and art. A few years earlier, as a teen, she had worked at Qualla Arts and Crafts Mutual, a Native American arts cooperative in Cherokee, North Carolina, learning about and selling the work of traditional Cherokee artists. Her own artistic inclinations led her to a Bachelor of Fine Arts in photography and painting from the Atlanta College of Art in Georgia.

Now tasked with producing pen and ink illustrations of 20 or so traditional basket weaving designs, Goshorn put her cultural awareness, drawing skills, and eye for detail to use. After about the 16th pattern, she knew she was absorbing what her ancestors, generations of women who wove such baskets, had known. “I thought: I get this rhythm. I get the math. I understand how these baskets were created and how the patterns were made,” she said in a 2015 documentary produced by filmmaker Sterlin Harjo.

Many years later, after working in other media, including photography, painting, fused glass, and installation art, Goshorn taught herself to produce the basket patterns her mind and intuition had previously understood. Instead of weaving splits of white oak, honeysuckle, or cane, however, she used archival watercolor paper onto which she printed facsimiles of historical documents, treaties, photographs, maps, or quotes. She cut the paper into strips and wove them in traditional patterns, often working in such a way as to perfectly reassemble the images she’d cut up. She also taught herself the difficult double-weave, becoming only the 14th living Eastern Cherokee to have mastered the technique. 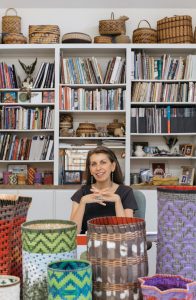 As soon as Goshorn began presenting her baskets, she discovered something remarkable. They were the perfect form for opening viewers’ eyes and minds to themes she had been passionately expressing in her art for years, but which are often difficult for people to acknowledge and consider. Among them: cultural appropriation, historical and present-day racism involving indigenous peoples, violence against Native women, environmental degradation, and the tragic loss of languages, cultures, and ancestral lands.

A major exhibition of Goshorn’s baskets currently on view at the Gilcrease Museum in Tulsa, Oklahoma, highlights not only the artist’s exquisite craft and its power to express what she deeply cared about, but also the value of her mentorship of and influence on other Native American women artists. Weaving History into Art: The Enduring Legacy of Shan Goshorn runs through March 28 and features 58 of her baskets in rotation, with about half on display through January 3. The show will then close briefly and reopen with the rest of the pieces. For those unable to visit in person, the museum is offering an online experience, including videos about Goshorn and the exhibition’s other four artists: Carol Emarthle Douglas (Northern Arapaho/Seminole), Anita Fields (Osage/Muscogee Creek), Lisa Rutherford (Cherokee), and Holly Wilson (Delaware/Cherokee). A full-color, 128-page catalog of the exhibition is also available. 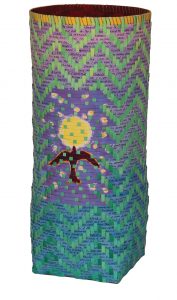 Mark Dolph, the Gilcrease’s curator of history, says that while the exhibition was in the planning stages long before the events of 2020, its appearance at this moment in time coincides with heightened societal awareness of racial and economic inequities underscored by a global pandemic. Goshorn’s art offers an opportunity for what Dolph describes as “long overdue conversations on the injustices of systemic racism that have haunted America’s history since the first encounters of Europeans with Native people and the enslavement of Africans.” And it does so through compelling visual beauty and masterful artistic execution.

“When I think about the technical aspects of weaving these baskets, I have such a high magnitude of admiration,” Dolph says. “These are tour de force works.”

Goshorn’s art has earned numerous top awards, been internationally exhibited, and is in such permanent collections as the Smithsonian Institution’s National Museum of the American Indian, the Gilcrease Museum, the IAIA Museum of Contemporary Native Arts, and the Eiteljorg Museum of American Indians and Western Art, among others. 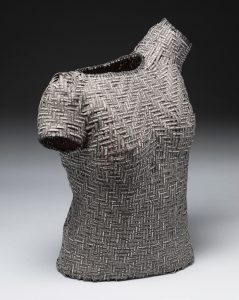 For the artist, the goal throughout her career was to raise consciousness among Natives and non-Natives about issues that are specific to indigenous peoples but are also universal human rights. After moving to Tulsa in 1981, she began attending powwows and meeting people from different tribes. Among them were artists and indigenous rights activists, including Richard Ray Whitman (Yuchi-Muscogee/Creek) and Edgar Heap of Birds (Cheyenne/Arapaho). 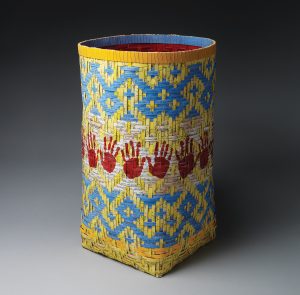 Yet, until she began creating baskets, Goshorn remained largely disappointed in the public’s response to her efforts to initiate cultural conversations through her art. Speaking about her work in public, she would notice people crossing their arms over their chests “as if wrapping themselves up in barbed wire,” as she once put it, and backing away or leaving the room. “Her advocacy could be like wagging a finger in someone’s face; it could turn people off,” Dolph says.

In other cases, viewers may have been unable to move beyond the beauty of the art to the message behind it, explains heather ahtone (Chickasaw/Choctaw), who has curated exhibitions that have included Goshorn, and now serves as senior curator at the soon-to-open First Americans Museum in Oklahoma City. 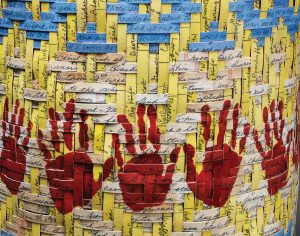 Beginning with Goshorn’s first basket in 2008, however, people responded in a very different way. Curious and intrigued by the patterns, colors, and materials, viewers would literally lean in to get a closer look. In Harjo’s film, Goshorn speculated that the form contributes to the viewers’ more receptive attitudes. “It’s a very unassuming shape. It’s a domestic container, it’s a vessel,” she said, adding that as humans, we all share a nurturing ancestral memory of such a shape and a mother or grandmother who used baskets to gather and carry things.

Rebecca Head Trautmann, the assistant curator of contemporary art at the National Museum of the American Indian, worked with Goshorn in 2013 when the artist had a fellowship for research in the museum’s collections. “What makes Shan’s work so powerful to me — beyond the technical mastery that first draws viewers in — is the way she transformed photographs, maps, and documents, often carrying stories of pain and cruelty, into vessels of knowledge, understanding, hope, and healing,” Trautmann says. “She confronted painful histories and injustices while honoring the strength, resilience, and perseverance of Native people and cultures.” 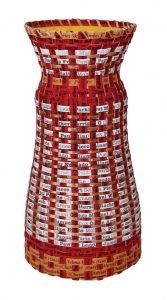 Among the injustices addressed through Goshorn’s baskets is the disproportionate — and too often unreported and unprosecuted — level of violence against Native women. SQUAW, created in 2018 and the last piece she completed, takes as its title the pejorative term used to relegate Native women to nothing more than disposable sex objects. This debasing connotation contrasts with the basket’s form, which echoes Venus de Milo as a classic Western symbol of female beauty. The interior is woven with red strips printed with the names and tribes of women who are missing and murdered, according to family members, but whose cases were dismissed by law enforcement or never investigated. In the U.S., statistics indicate three in five Native women will be physically assaulted, and women on some reservations are murdered at more than 10 times the national average. Yet, U.S. attorneys decline to prosecute 67 percent of cases of sexual abuse against Native women. 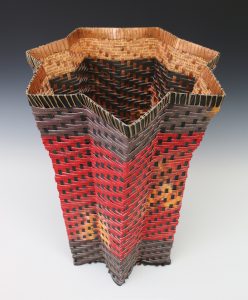 Another striking basket weaves a touch of human hope and love into a heartbreaking page in history. Unexpected Gift is based on the federal government’s policy, continued into the 20th century, of removing Native children from their homes and placing them in distant boarding schools. The express purpose was to strip children of their language, culture, and tribal identity, forcing their assimilation into the dominant culture. In this basket, Goshorn presents an aspect of the experience that has been less widely acknowledged: Many lifelong friendships, intertribal marriages, and bonds among diverse tribes emerged from children and teens housed and schooled together. The basket’s pattern is a variation on the traditional Cherokee “Unbroken Friendship” design. It incorporates blue splints onto which the artist transcribed her grandmother’s personal boarding school memories from a video recording. And words from Goshorn’s mother’s boarding school memoirs are printed on white.

Despite the seriousness of the issues that informed Goshorn’s art, those who knew her say she approached life and work with a sense of joy. “She was an incredibly compassionate, kind, generous person with a great capacity to make everyone feel as if they were the most important person in the world when they were with her,” ahtone remembers, adding that generosity of spirit extended to mentorship, encouragement, and inspiration, particularly for other Native women artists. “Shan really opened doors for others to innovate in a way that honors tradition.”