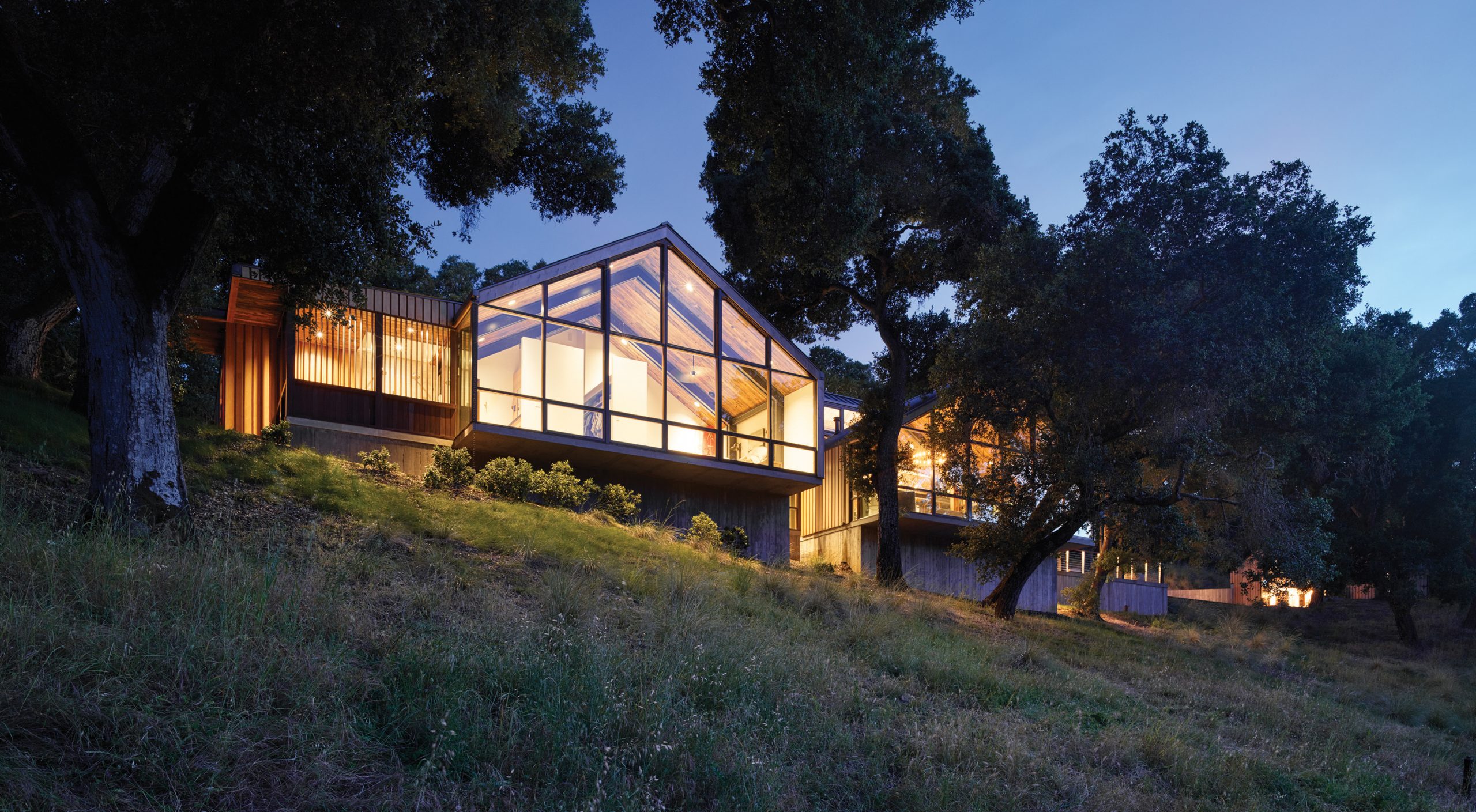 Not many creative professions are easily passed from one generation to another, but at Field Architecture in Los Altos, at the northern end of California’s Silicon Valley, a father and son are creating dwellings that are memorable not only for their extraordinary beauty but also for their deep symbiosis with their natural settings.

“Architecture is perfect,” son Jess Field says. “If we do it right, the buildings we create will outlive us, so there’s an intergenerational spirit inherent in what we do.”

Both father and son have a near-mystical relationship with the land, the origins of which Jess attributes to their love of the bushlands in their native South Africa, where they could escape the ugliness of their country’s apartheid rule into the beauty of nature. 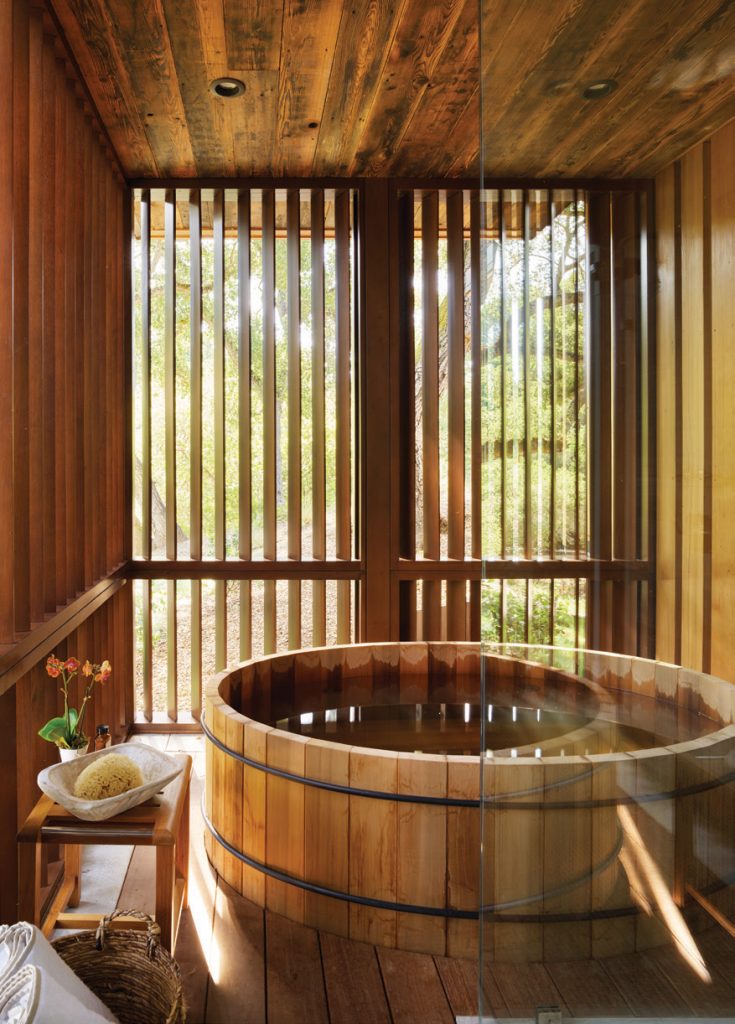 A screened addition in this bathroom holds a cedar tub with views over the valley. 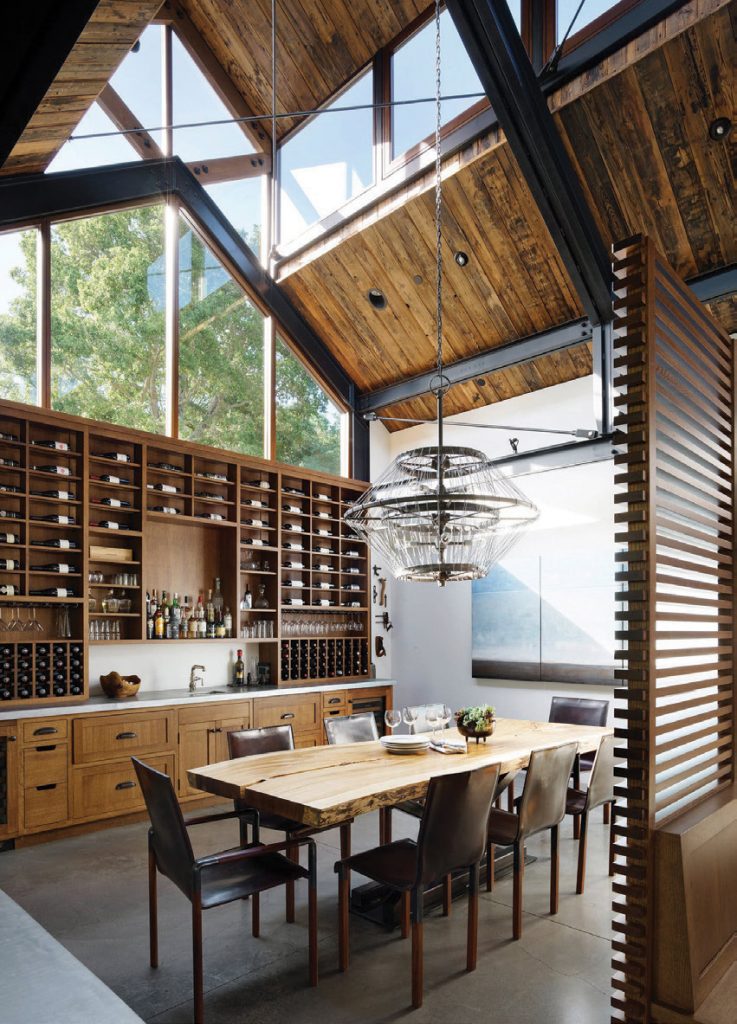 The custom dining table echoes the reclaimed wood used in the ceilings. 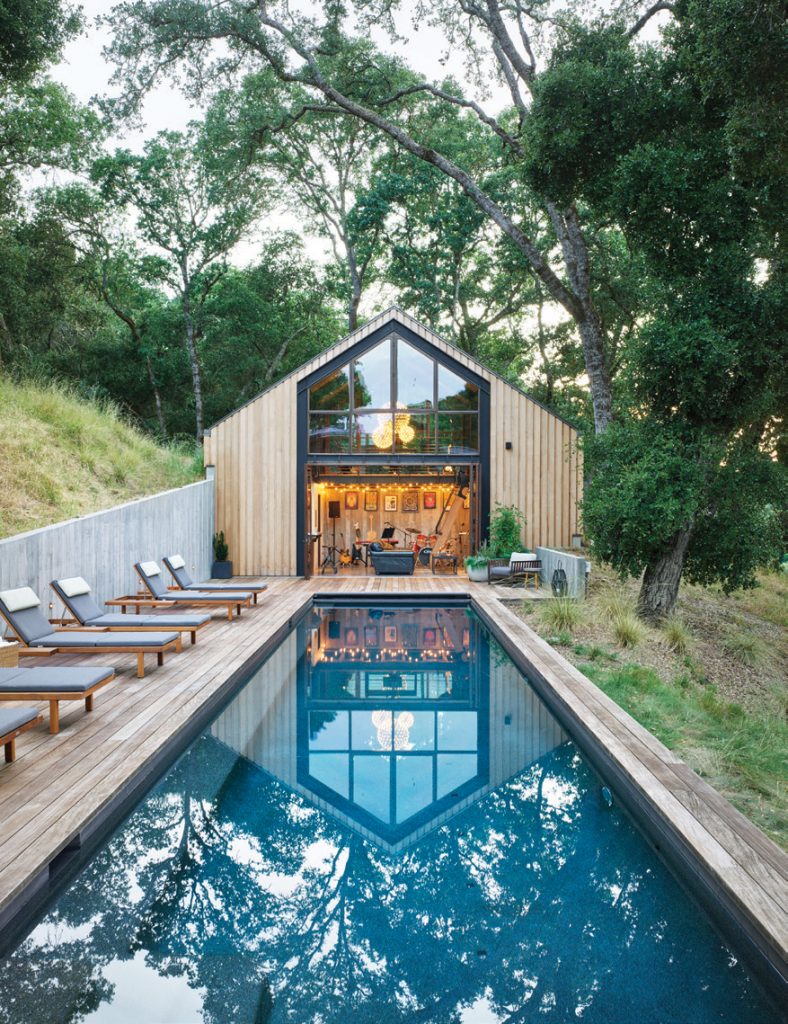 The separate music studio at Pinon Ranch is divided from the living area by a lap pool and terrace.

“Let me tell you a little story about Stan,” Jess says of his father. In the ’60s, Stan ventured across a formidable cultural divide from South Africa to the University of Pennsylvania to study for his master’s degree in architecture under Louis Kahn, one of the 20th century’s giants. He ended up working in Kahn’s office as well as chauffeuring the eccentric architect around, and Jess grew up on what he calls “Kahnian lore,” stories about the revered teacher who famously suggested architects should strike up a conversation with their materials. Kahn’s body of work was not huge — he’s probably best known for the Salk Institute in La Jolla, California — but his effect on architecture has been profound.

Almost immediately upon graduating and returning to South Africa, Stan was asked to design a house in a Johannesburg suburb called Khyber Rock. “On this little hillside,” Jess says, “there were giant boulders, each one the size of a small bus. And my father made two rules: no rock should be moved, and no structure should touch any of the rocks.” 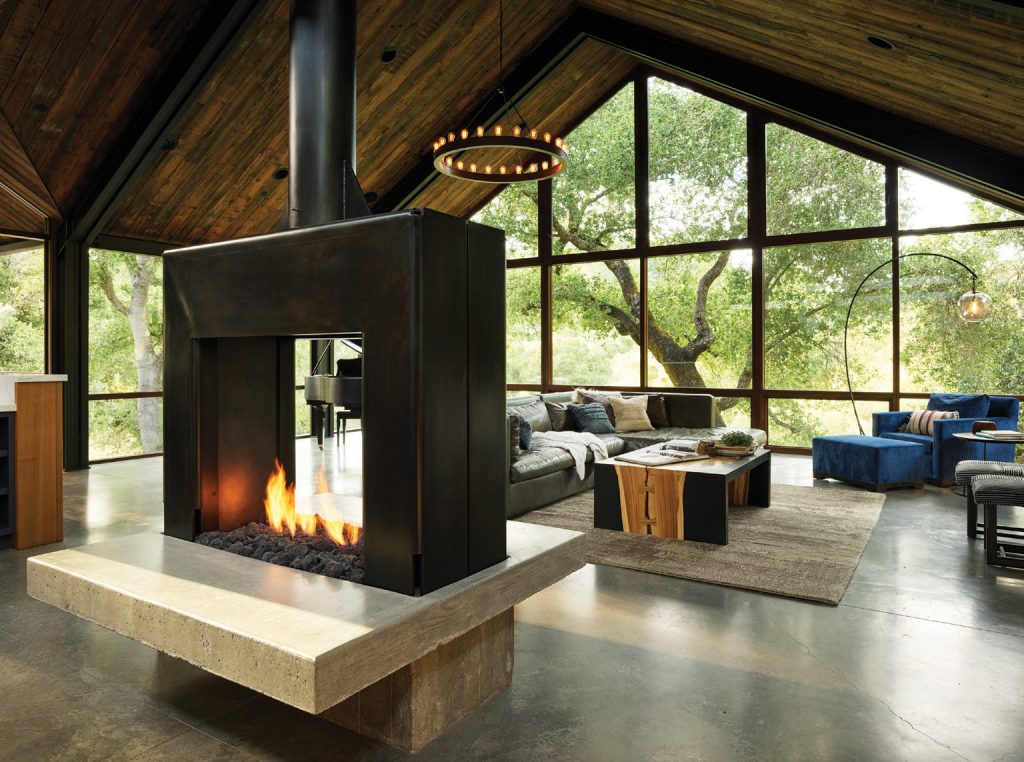 Soaring wood ceilings, exposed steel beams, a double-sided fireplace, and glass add a sense of openness and a connection with the tree canopy. 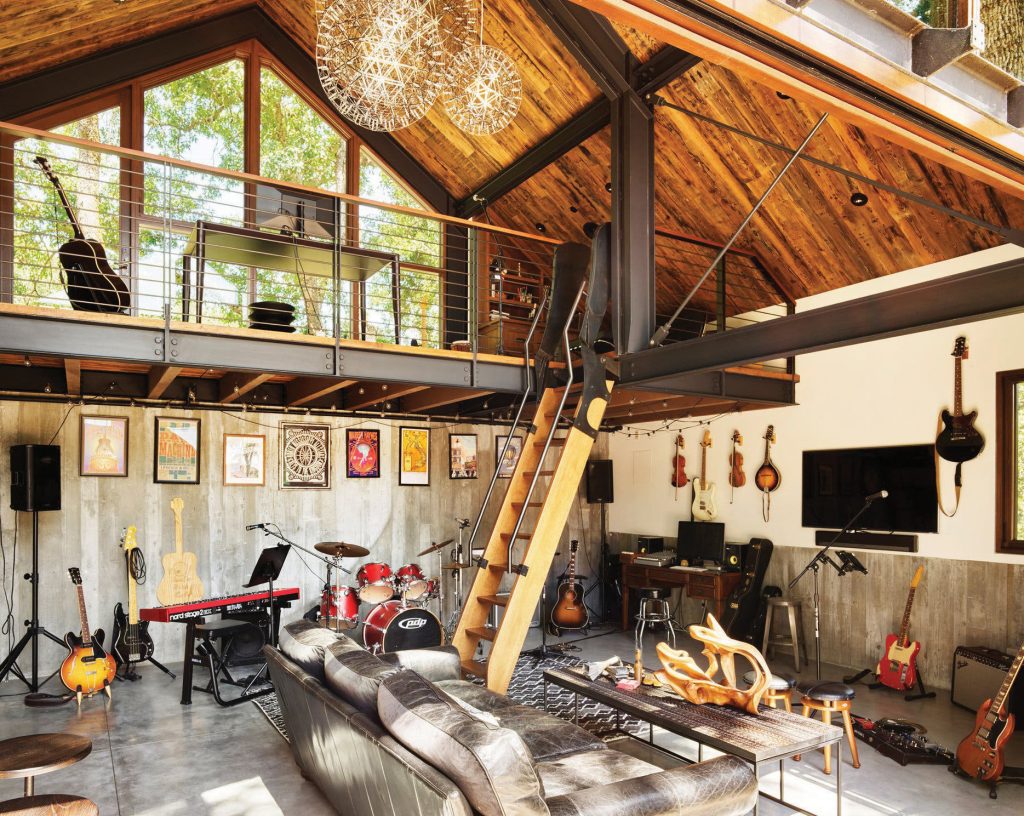 The music studio is a family gathering spot for bluegrass jam sessions. 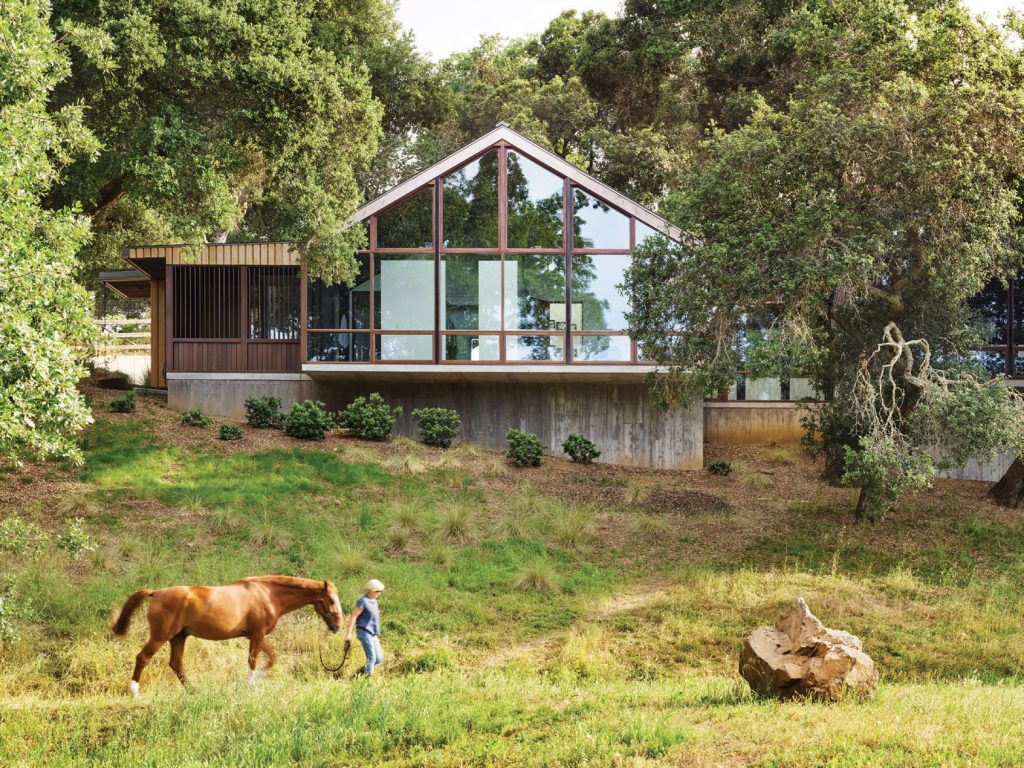 The house seems to float over the pasture below. The wife is an equestrienne, and the compound includes a four-horse stable and barn. Photos: Matthew Millman

Stan spent days and nights on the site, imagining a house that would honor, not manipulate, its natural environment. The Miller House, as Jess says, “kind of leapt over the rocks,” as striking a design today as it was when it was completed in 1972.

“That’s really the springboard of our philosophy at the firm: that buildings without nature are just buildings,” Jess says. “But when we relate buildings to nature in ways that have real synergy, that’s when architecture is born.”

In their Los Altos studio, they also have what Jess calls a “library,” a Kahnian-style collection of materials with which they’re constantly experimenting, including wood, steel, and stone, “to discover the nature of the material,” as Jess explains, “and let it have a voice within the design process.” 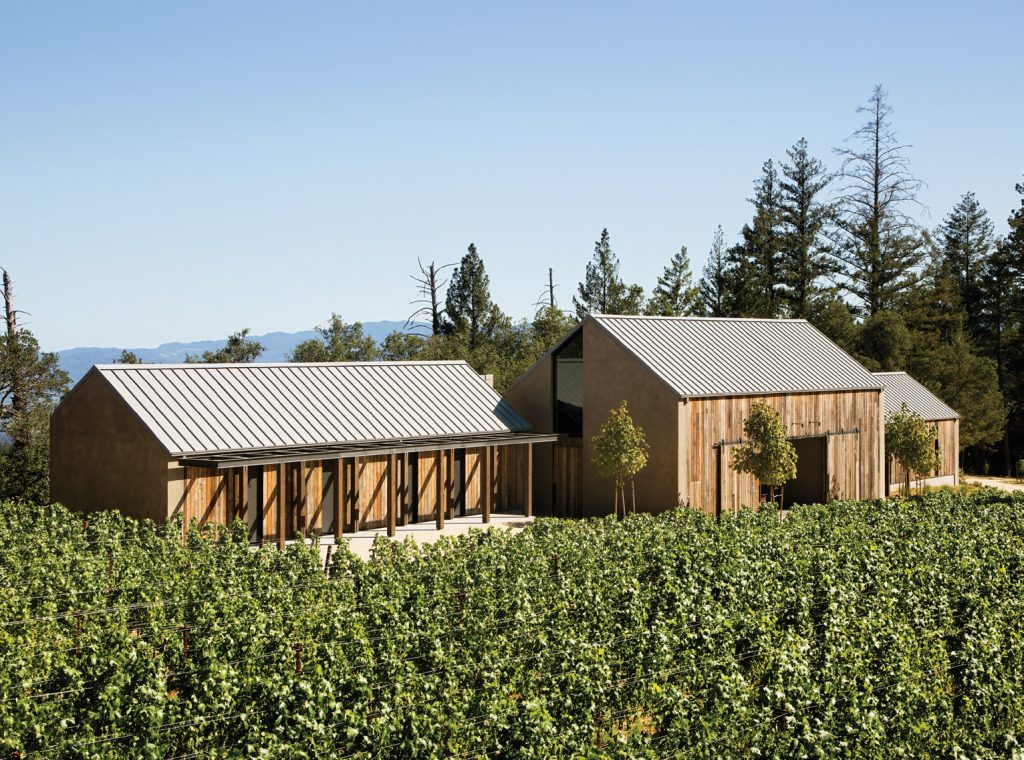 A home called Sentinel Ridge rises from a rock shelf between regimented rows of grapevines and a cliff that plunges to the untouched forest, creating a powerful dialogue between cultivated and wild lands. 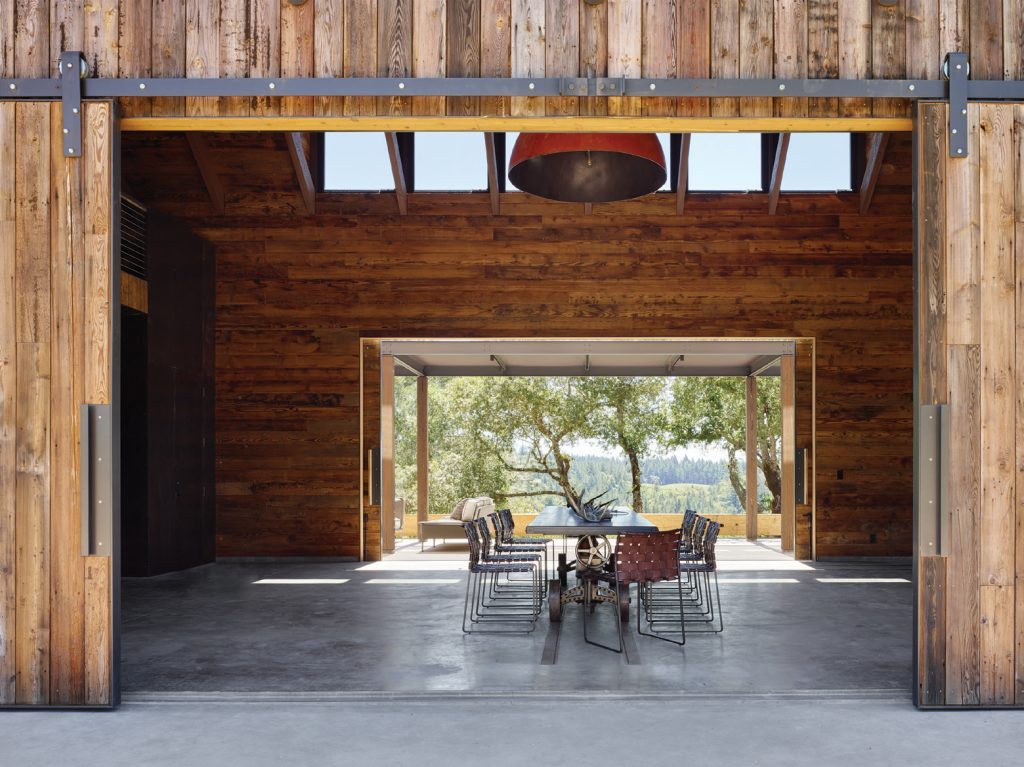 Large barn doors slide open to reveal a custom dining table that can be raised for wine tastings and moved via tracks embedded in the concrete floor. 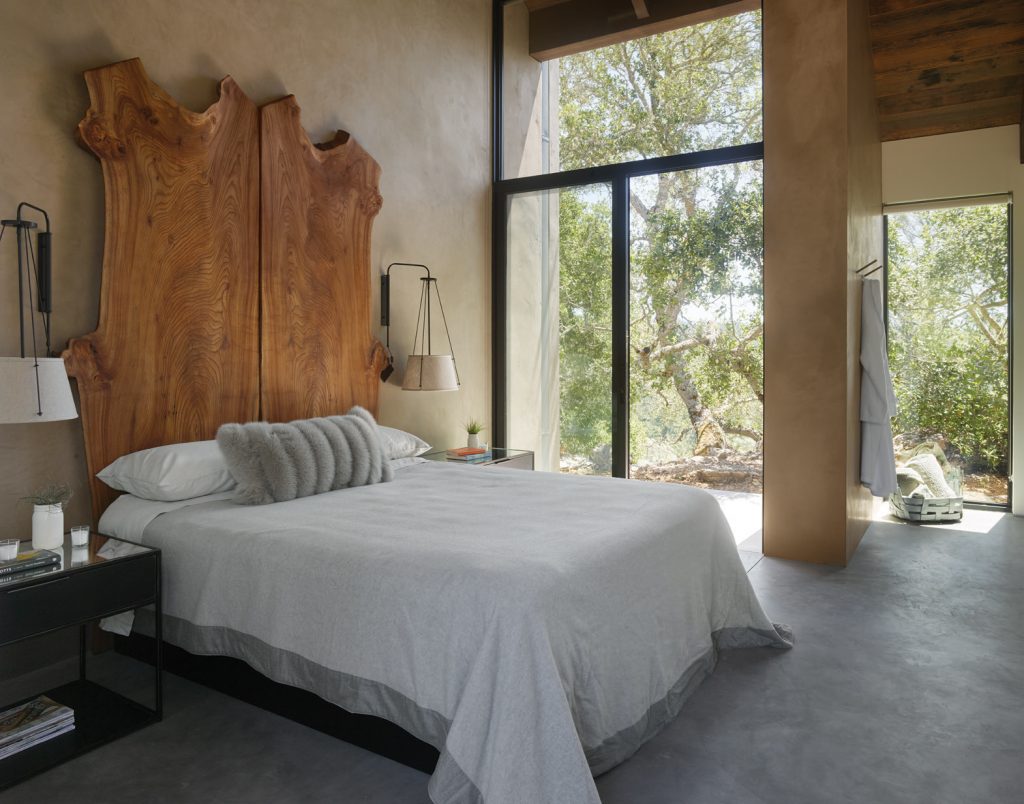 The guest rooms open to nature. A custom live-edge headboard adds a mix of sophistication and rusticity.

The firm consists of a team of 12, all of whom are completely involved with each project, and there’s no desire to grow the firm larger. “We’re focused on what we’re best at,” Jess says. “We don’t distribute ourselves too broadly. We’re there from start to finish in an effort to create buildings that feel like they belong where they are.”

They employ the latest technology, but drawing is at the heart of what the Fields do. Just as with Stan’s first built design, the two architects spend days and nights prying open the character of each site, developing a visceral relationship with the trees and the terrain, all the while sketching and imagining.

“We work through thousands of sketches in this very tactile process,” Jess says. “We don’t approach our work in an overly intellectual way; rather we approach it from a sensory perspective. I think the intellectual dimension is kind of a by-product of that.” 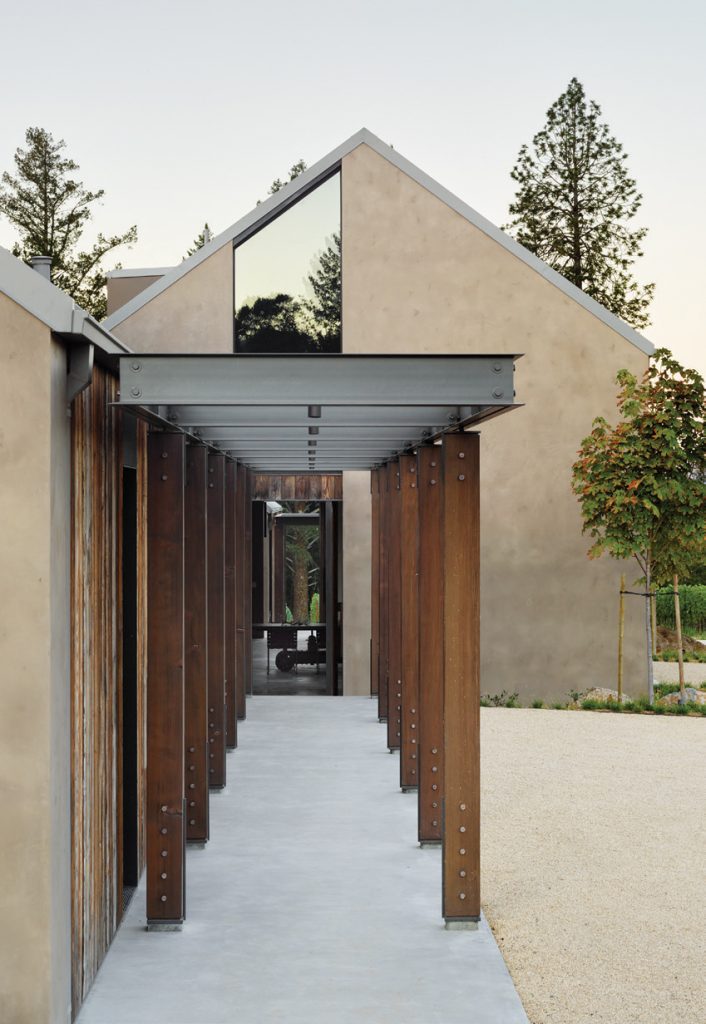 A meticulously detailed metal and timber colonnade connects the three volumes of the house and is gabled to reflect the wine country’s agrarian architecture. 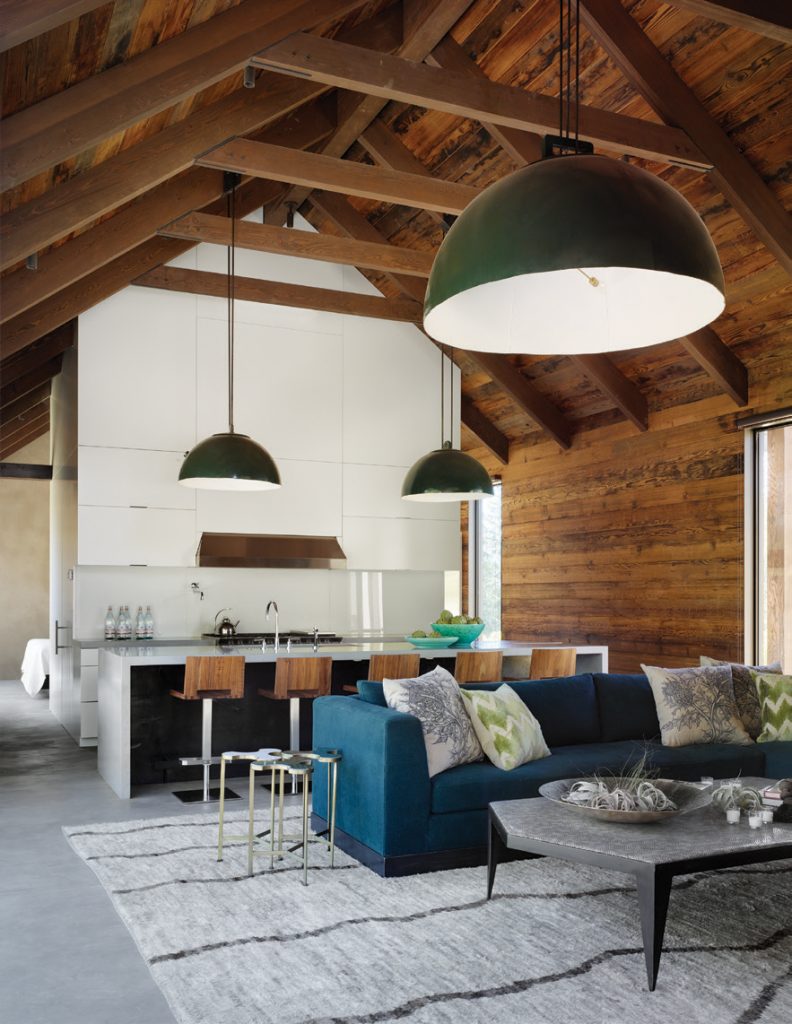 The reclaimed wood of the peaked ceiling continues down the walls. 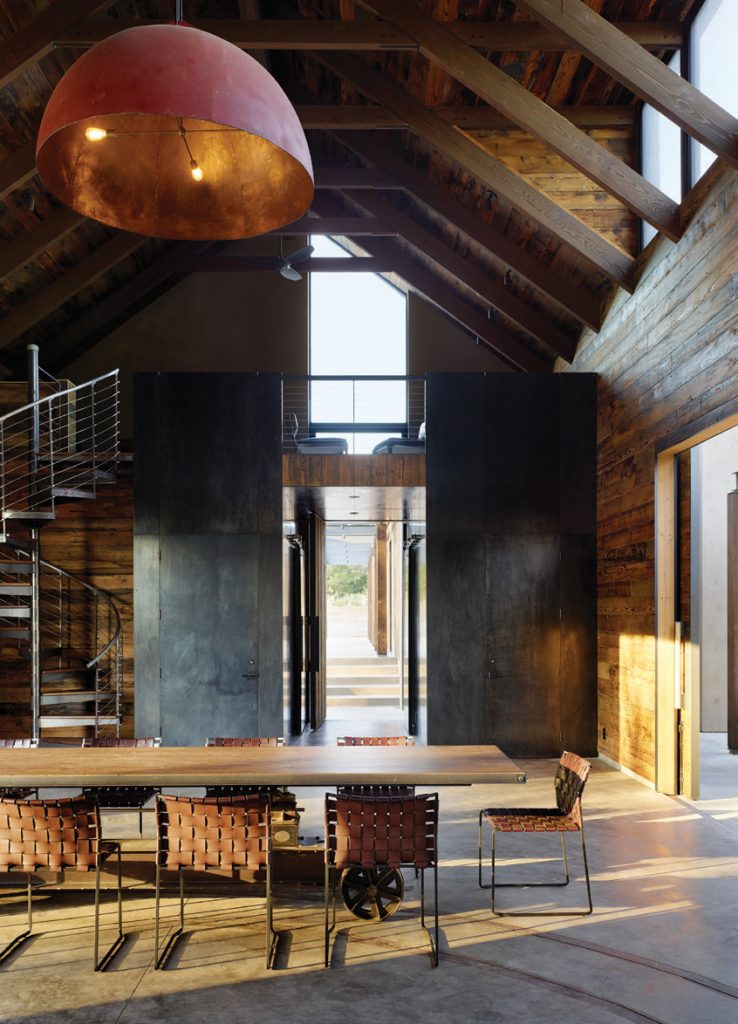 For a project titled Dawnridge, their first objective on the suburban site was to restore a degraded stream and tear down the fences surrounding the property — near anathema in a developed neighborhood. Now, natural brush and trees delineate the edge of the property, which creates a feeling of uninterrupted nature, and a centuries-old blue oak tree commands the woodland site.

“When you’re on the site,” Jess says, “it feels like it’s much bigger than it is, just part of the woodland, and it allows this uninterrupted thoroughfare for the wildlife. The house itself is like a giant wishbone around the oak tree. The whole structure then becomes an orchestrated sequence unfolding the layers of what’s there. Big doors open onto the stream and let the sound of the water and frogs come in at night, and then you wind your way to the upper part of the house, where the homeowners’ bedroom feels like a treehouse.” 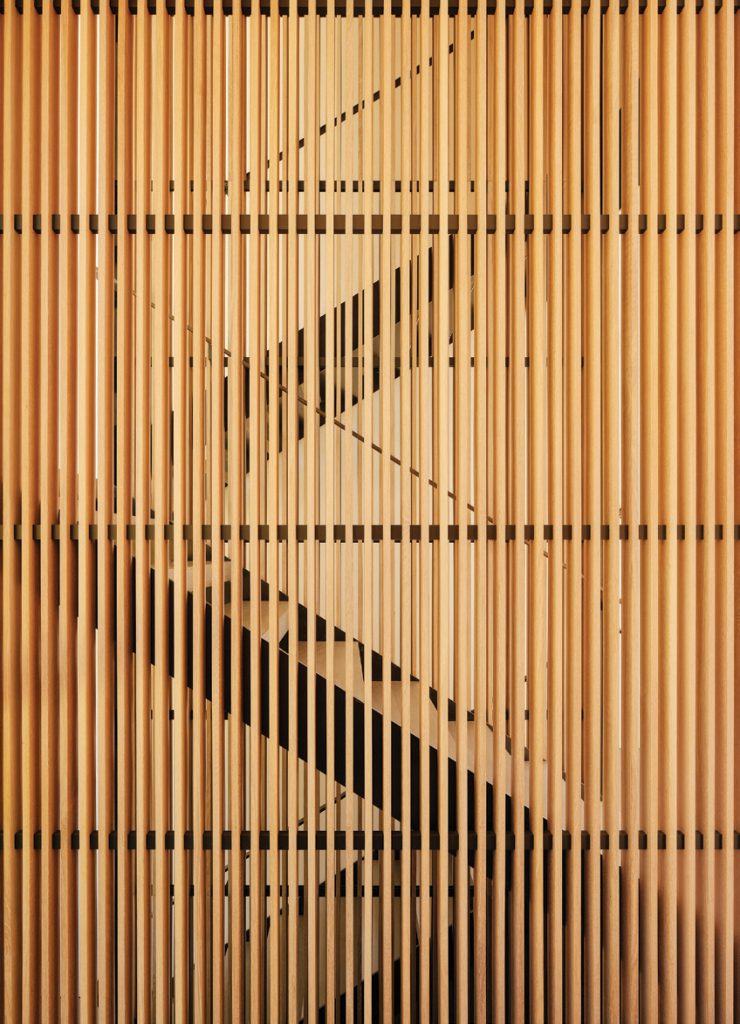 Slatted-wood screens line the steel and timber stairway to the treehouse-like bedroom, providing a sense of mystery in the dappled light. Photos: Joe Fletcher 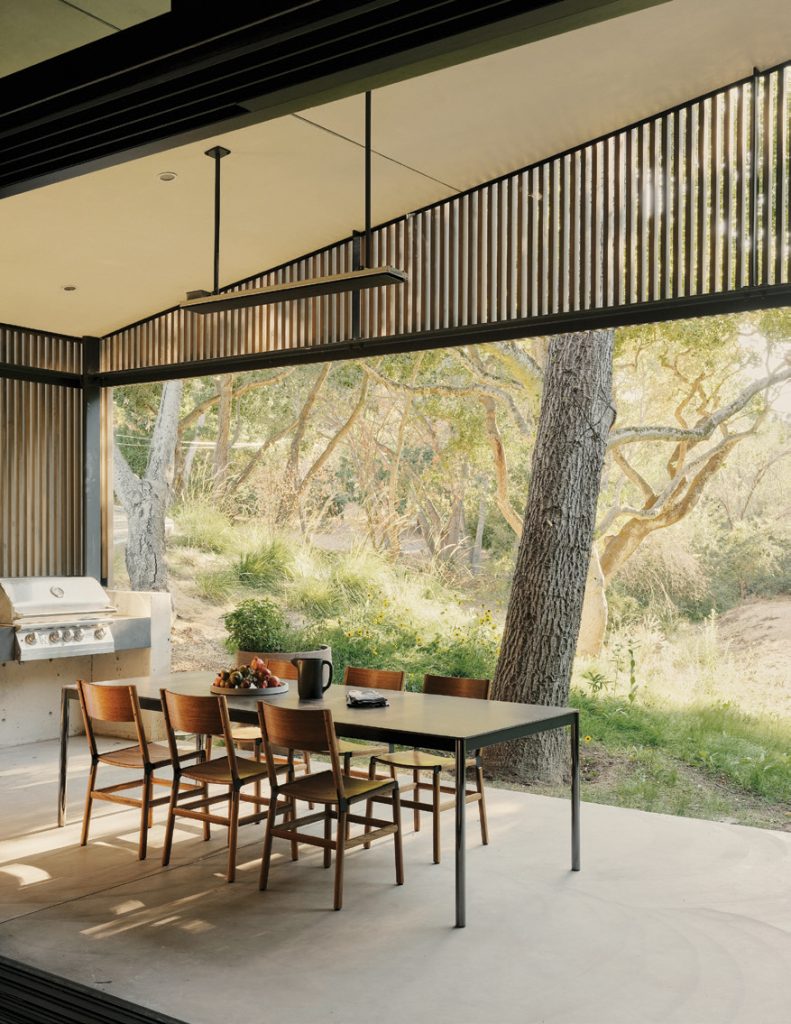 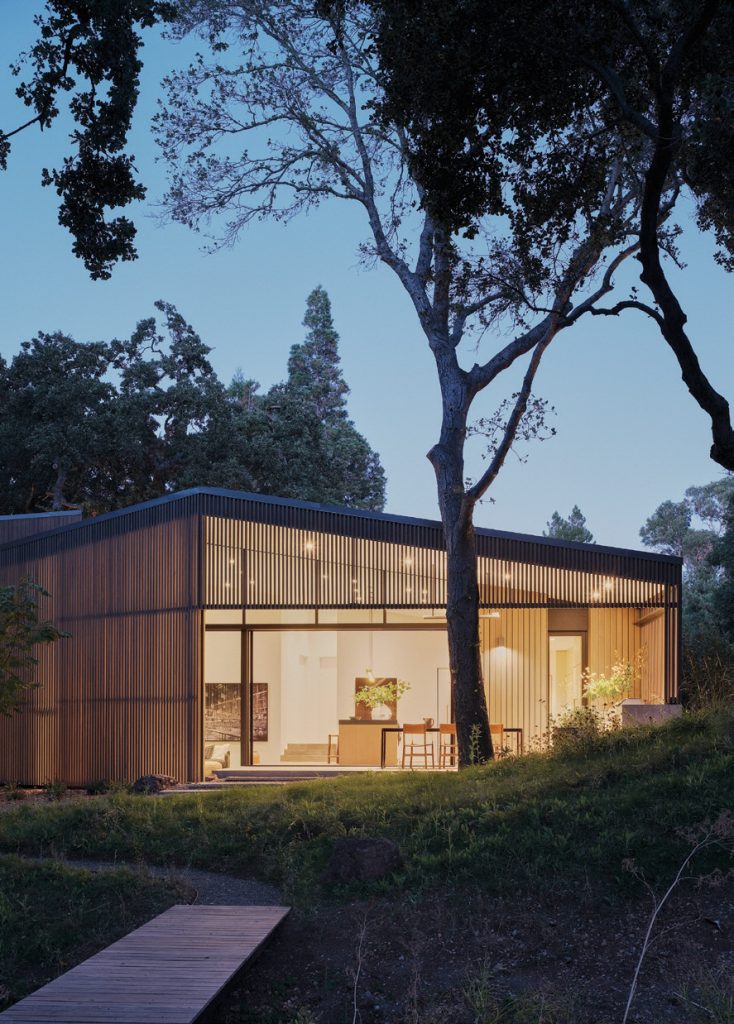 A path from the house leads to a wooden bridge across the creek.

At Pinon Ranch, the Fields took on the challenge of designing a home on a steep site that others had declared unbuildable in Portola Valley, California. Again, the architects looked to the landscape for a solution and inspiration: “We spent time there and found there was a deer trail carved laterally across the site, woven in and out of the tall oak trees,” Jess says. “It gave us the inspiration that if we found that one sweet spot that wasn’t quite at the top of the hill, wasn’t too far down, and allowed us to carefully weave the house in and out of the trunks of the trees, we’d be able to set the entire house on a single elevation. The building feels like it’s floating in the canopy of the oak trees as it looks down on the pasture below.”

The clients are musicians, so one of the requirements was a music studio, which received special placement within the project’s program. “It feels like a fragment of the house kind of drifted off and burrowed itself into the hillside,” Jess says, adding that it’s separated by a swimming pool from one soaring gabled end of the main house. 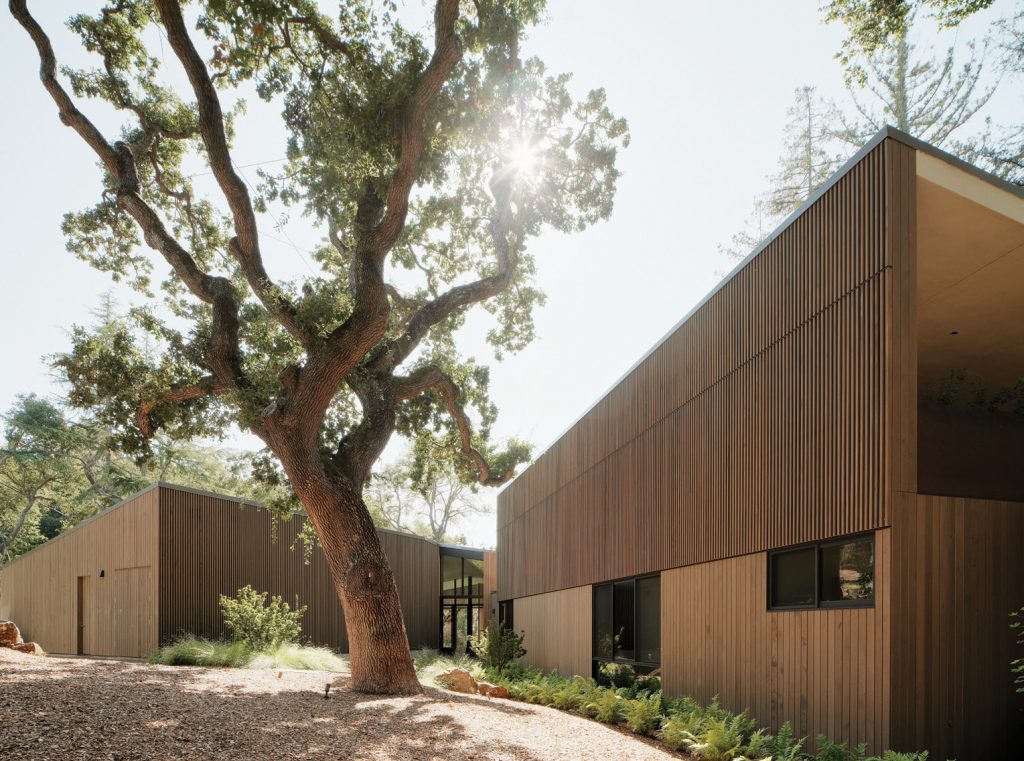 A home called Dawnridge was designed to accommodate a stately blue oak, with each wing providing a unique connection to the site’s wild character. 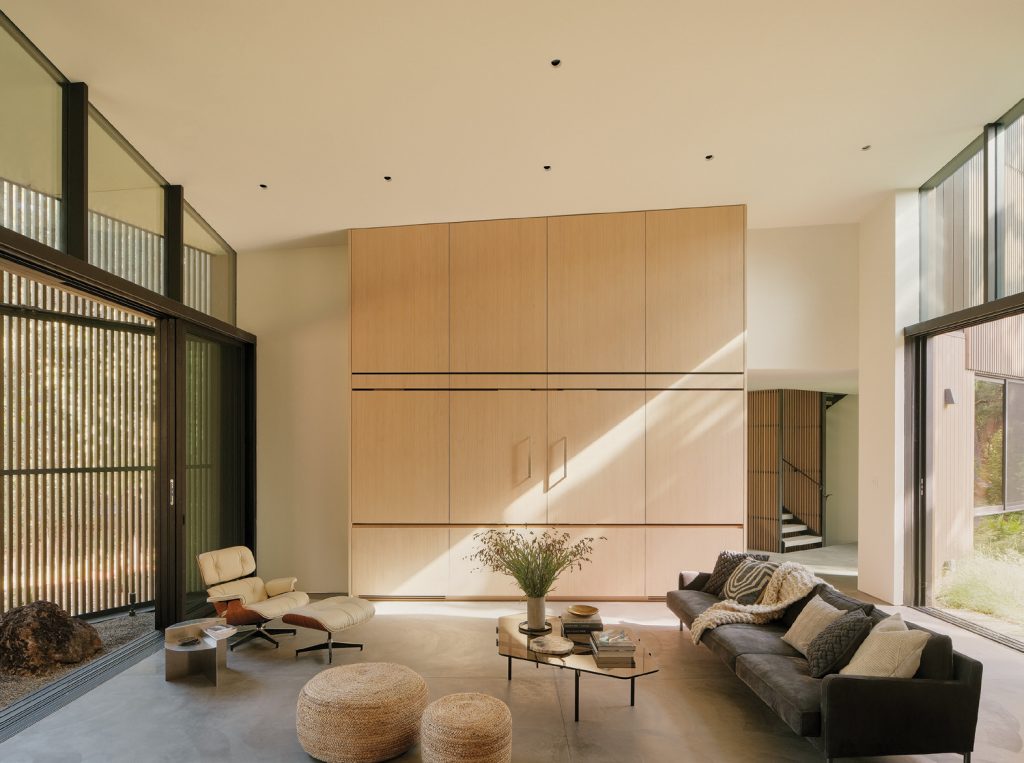 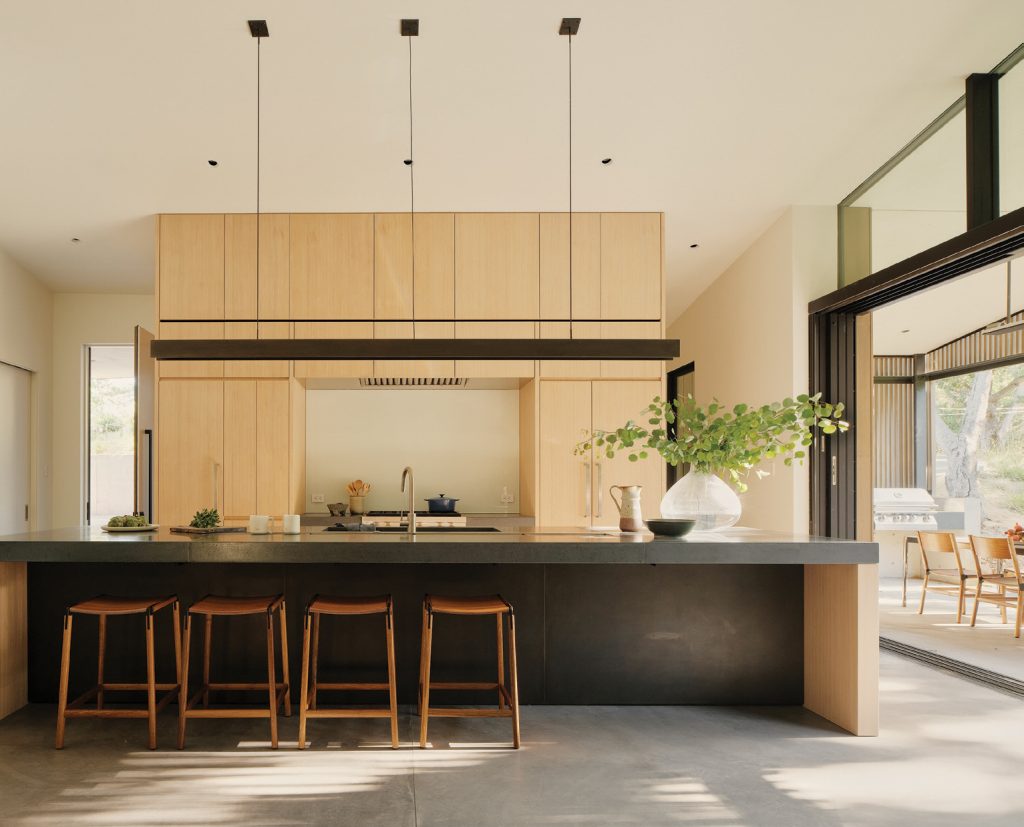 Sliding doors in the kitchen open to the outdoor dining area.

The wife is an equestrienne, and in the flatland below, they created a four-horse stable and a barn. It was no easy feat getting the building materials onto the site without disturbing the trees, but the result is an airy, light-filled house that’s at once elegant yet comfortable enough for its boisterous family and dogs.

Another project, called Sentinel Ridge, high above the eastern side of Napa Valley, consists of three gabled sections bordered on one side by neat rows of vines, and on the other by treetops lining a cliff, where the trees have grown extraordinarily tall reaching for light. The vineyard developers had discovered a shelf of hard rock just below the soil and were planning on using dynamite to remove it and create more space for vines. The Fields quickly nixed this idea, instead deciding to allow the rock shelf to determine the site of the building. “We pinned the foundations to that hard rock bed under the surface like a giant surfboard,” Jess says. 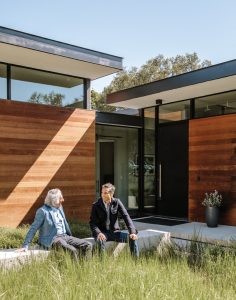 Stan and Jess Field find inspiration through a deep connection with the natural environment.

At the center of the home is an immense barnlike space that the Fields crossed with railroad tracks. They included a table that could be moved on the tracks for centralized dining or to the edge of the room where it could be raised and used for wine tastings. On each side are barn doors that can be fully opened, revealing on one side a view of orderly vineyard rows, and on the other, untamed forest.
Jess recently spent time in Idaho and Montana and felt seduced by the mountain landscapes. There’s a project in the works in Idaho, and he’s hoping there will be more work to come in the Mountain West. 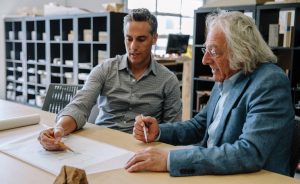 The Fields are passionate about sketching and drawing to uncover their final design. Photos: Brian Flaherty

“For us, it all starts with the chemistry between people and land,” Jess says. “And that goes back as long as people do. We bring to the surface the spark, the love that people have for the places they’re thinking of dwelling.”