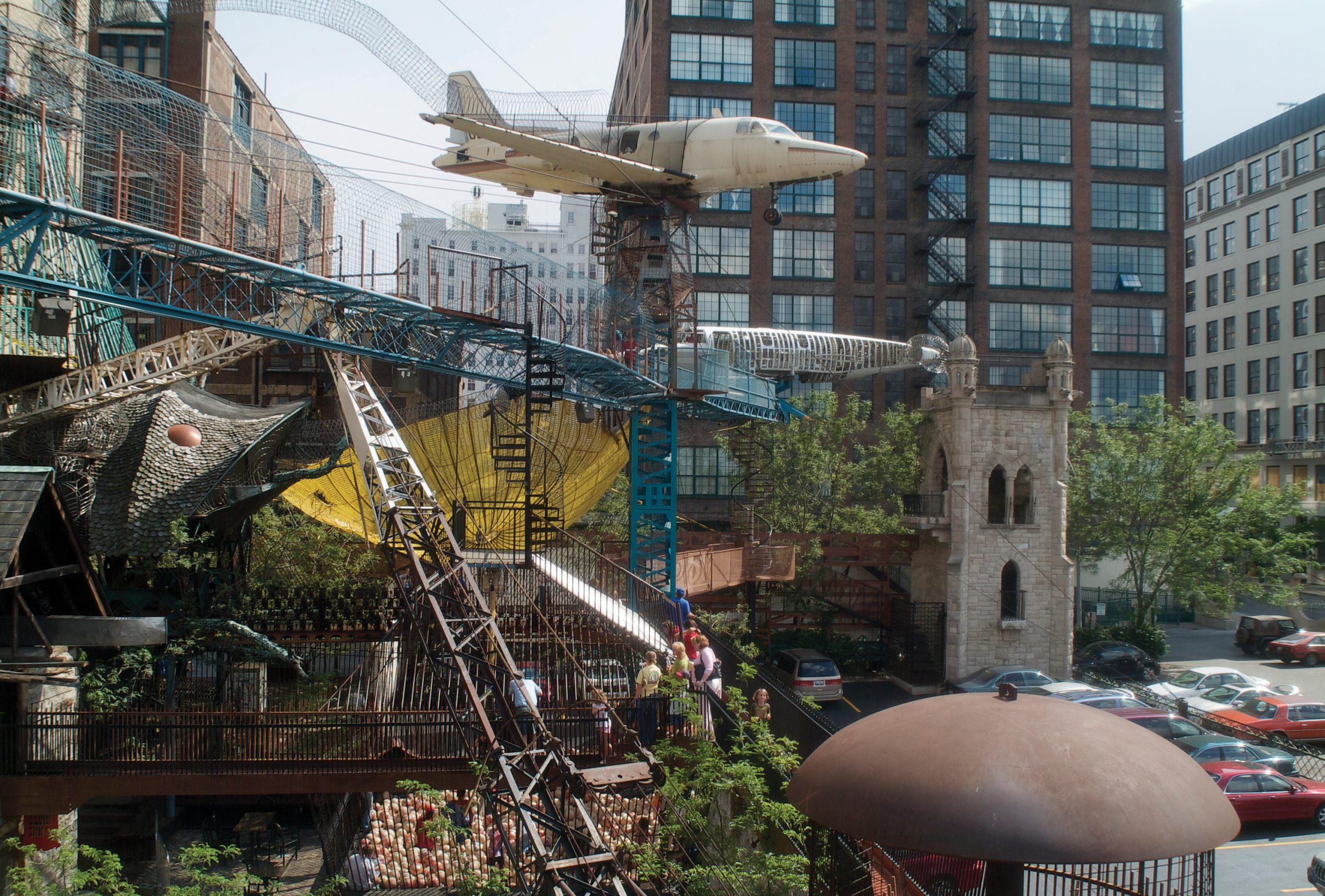 The City Museum is a wonderment of art and repurposed architectural and industrial objects housed in the old International Shoe building. Photo courtesy of Explore St. Louis

Forget the arch. St. Louis is a city that builds a floodwall along the Mississippi River and invites graffiti artists to leave their mark. The Mural Mile spans 2 miles — the longest mural in the world — and every Labor Day weekend, at an event called Paint Louis, street artists from around the world show up with something to say. In St. Louis, art has to mean something.

Sandy Brooks, with a background in public health and medicine, directs the St. Louis Arts Chamber of Commerce. “Art has purpose,” she says. Whether it’s offering an Art Heals Violence program to children, first responders, and anyone struggling with trauma, or creating magnificent custom masks for some of the city’s most famous sculptures and landmarks in an effort called #MaskUpSTL, Brooks says the St. Louis art scene shapes the culture in this city. It heals that which is broken. “We are passionate people … addressing social issues through creativity and beauty,” Brooks says. 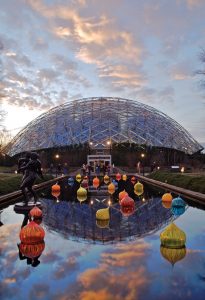 The nearly 60-year-old Climatron, a glass marvel filled with tropical plants from around the world, is one of the highlights of the Missouri Botanical Garden. Photo courtesy of Explore St. Louis

Like other large cities in America, there has been a disturbing escalation in gun and other violence in St. Louis. But the city has a long history of social unrest. The Old Courthouse, a Greek Revival site of artistically significant works, such as Karl Wimar’s murals, is, famously, where the Dred Scott case was tried and lost in 1857, establishing, by Supreme Court rule, that African Americans were not entitled to citizenship. The courthouse is also where Virginia Minor fought unsuccessfully for a woman’s right to vote in the 1870s. When one lives by a river, one lives inescapably beside history and change.

But St. Louis has always aspired to be more than a river town. The city’s commitment to art and artists, and to affording its healing properties to everyone, is on display across the distinct neighborhoods that define it. 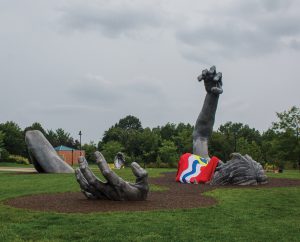 The Awakening by J. Seward Johnson Jr. is one of the sculptures in the #MaskUpSTL initiative, sponsored by the St. Louis Arts Chamber of Commerce.

At the western edge of the city, Forest Park is one of the largest urban parks in the U.S. and home to several of St. Louis’ most esteemed cultural institutions. The Saint Louis Art Museum occupies the 1904 Palace of Fine Arts, showcasing 5,000 years of global art in more than 100 galleries. Admission is free, just as it is for the nearby world-class Saint Louis Zoo, which is populated with impressive bronzes by artists such as William Timym and T.D. Kelsey.

Also in Forest Park, the Jewel Box is a lovely Art Deco glass greenhouse built in 1935; and the Municipal Opera, known as the Muny, is an outdoor amphitheater for musicals, opera, and concerts. The 1,500 seats in the last nine rows are free and handed out nightly on a first-come, first-served basis. Art is for everyone in St. Louis. 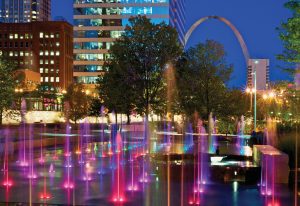 On tree-lined streets outside Forest Park, stately old homes along Lindell Boulevard capture the grand European-flavored architecture of the late 19th century. Washington University, founded in the same era, is just west of the park and its Mildred Lane Kemper Art Museum — in a glass building designed by Pritzker Prize-winner Fumihiko Maki — is one of the largest teaching museums in the country. The museum, also free, has been acquiring significant works by European and American artists since 1881.

North and east of the park is an upscale, artsy neighborhood known as the Central West End, full of sidewalk cafes, bars, galleries, and boutiques. Some favorite eateries in the area include Cafe Osage at Bowood, which serves seasonal fare for breakfast and lunch, much of it grown onsite, and shares space with the leafy Bowood Farms storefront. Brasserie by Niche is a beloved French Bistro with a James Beard award-winning chef. Ice cream lovers must visit Jeni’s Splendid Ice Cream, next to the fabled Left Bank Books. Centro Modern Furnishings is like a museum of modern furniture and lighting; and both the Duane Reed Gallery and Philip Slein Gallery have impressive contemporary collections. The Third Degree Glass Factory is an ideal place to expend some creative energy with a class or workshop.

Kids Walking on a Log is part of the #MaskUpSTL initiative that demonstrates the city’s commitment to a healthier community.

Within walking distance of the park and the Central West End is the iconic 1922 Art Deco Chase Park Plaza hotel. The rooms are comfortable, the public spaces lovely, and there are several restaurants and bars in the hotel, as well as a movie theater.

Another fun place to stay in St. Louis is the boutique space-themed Moonrise Hotel on the Delmar Loop, a hip neighborhood for eating, drinking, and shopping. Sip a cocktail on the hotel’s rooftop bar and watch people below strolling the city’s Walk of Fame. For an outstanding cup of coffee and a delicious daytime meal, visit Meshuggah Café; or for a quick bowl of Japanese ramen or Vietnamese pho, try Nudo House, also on the Delmar Loop. 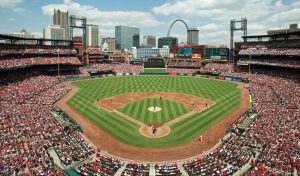 Busch Stadium is the home of the St. Louis Cardinals and a great place to spend a fall afternoon. Photo courtesy of Explore St. Louis

Closer to downtown, two uniquely St. Louis attractions appeal to any art lover. The City Museum is a wonderment dreamed up by a collaborative of artists led by sculptor Bob Cassilly. Housed in a 100-year-old warehouse, and never finished, the museum has caves, tunnels, a human-sized bird nest, a 10-story slide, and endless displays of art. Equally awe-inspiring is the Neo-Byzantine Cathedral Basilica of Saint Louis with one of the largest mosaic installations in the Western Hemisphere. Construction of the church took seven years, and the mosaic installation took an additional 76 years. Also in the neighborhood is the Missouri Botanical Garden, often called Shaw’s Garden, a sprawling grounds with an herbarium, a Japanese garden, and Henry Shaw’s 1850 estate.

When the need for bodily nourishment outweighs the demand for spiritual sustenance, the nearby Crown Candy Kitchen is a classic St. Louis soda fountain, serving lunch and dinner since 1913; and Carnivore STL combines a classic steakhouse with the Italian traditions of The Hill neighborhood. (Try the toasted ravioli, a St. Louis invention.) The Last Hotel is an elegant new hotel set in the historic 1909 International Shoe Company building. 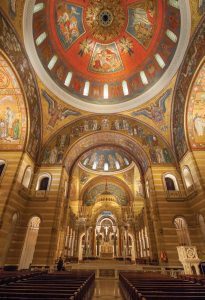 In addition to the remarkable mosaic installation, the Cathedral Basilica of Saint Louis houses burial crypts and outdoor sculptures that promote racial harmony.

In the midst of its own revival, the Grand Center Arts District is home to several museums, including the innovative and interactive Contemporary Art Museum of St. Louis. The free Pulitzer Arts Foundation presents historical and contemporary art in a stunning building designed by Tadao Ando. The St. Louis University Museum of Art, the International Photography Hall of Fame and Museum, and the Museum of Contemporary Religious Art are all in the neighborhood, as is the iconic Fabulous Fox Theatre, along with a number of performing arts organizations and venues. The new Angad Arts Hotel, where you can choose the color of your room based on your mood, also has a rooftop bar.

In the heart of downtown, with its assortment of artsy neighborhoods, including Lafayette Square and Soulard, the free Citygarden is a two-block urban oasis with interactive art, sculpture, and fountains. The original St. Louis coffee shop, Kaldi’s, serves delicious breakfast and lunch, plus beer, wine, and cocktails. 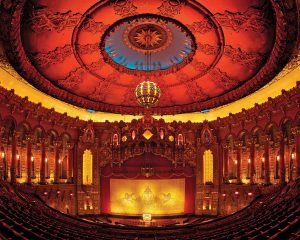 Originally built as the Palace of Arts and Culture for the 1904 World’s Fair, the Saint Louis Art Museum bears the inscription “Dedicated to Art and Free to All.”

At the end of your stay, if the city’s art has fed you, you can remember the arch. At the river’s edge, the Gateway Arch is the ultimate Mid-century Modern sculpture. Climb into the cramped egg-shaped elevators for a jostling ride up the 630-foot stainless steel landmark to the windows that look out over the city. Below, you’ll see the Old Courthouse, the landmark baseball stadium, and red brick building-like scaffolding across the city. You’ll see the treetop green of Forest Park at a distance and the beginning of Mural Mile, where maybe an artist is working, leaving a mark, and making something better. 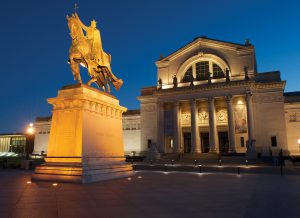 The Fabulous Fox Theatre was built in 1929 as the second largest movie palace of its time. Today, its eclectic Asian interiors give rise to a versatile performance venue. Photos courtesy of Explore St. Louis