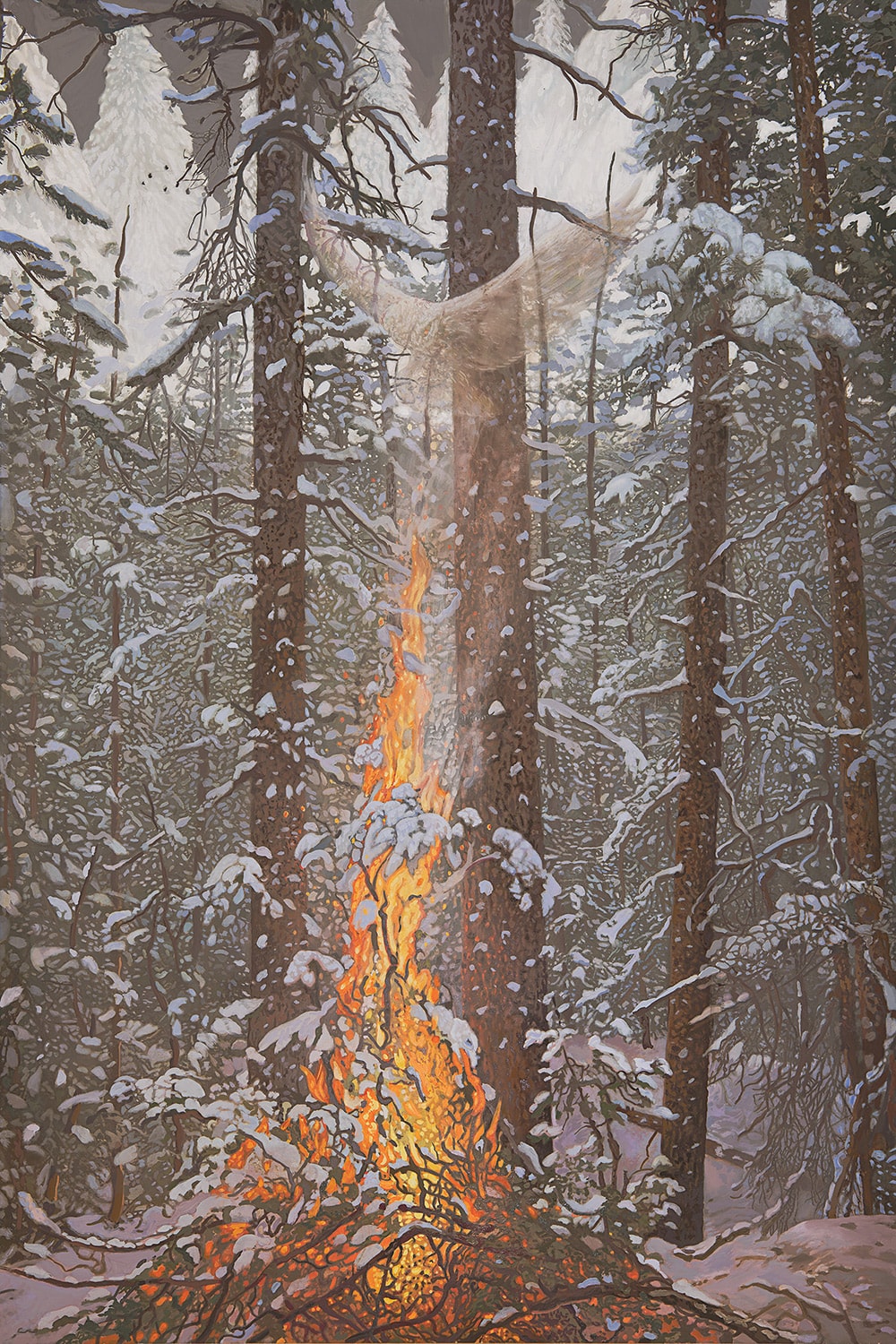 IT’S ELEMENTAL. SYMBOLIC. The center of stories told throughout the centuries. Fire informs our lives and questions our mortality. It is of the real world, but also the divine. It keeps us warm, ignites our imaginations, and destroys as well as engenders.

On Fire: Transcendent Landscapes by Michael Scott at the Autry Museum exposes the fine line between the real, physical presence of fire and its more mysterious, unknowable nature. 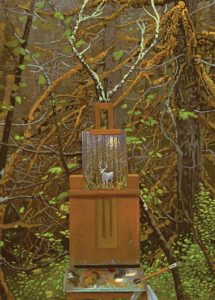 “It is the combining of the physical with the metaphysical,” says Scott of his collection of five, large-scale paintings on view at the Los Angeles, California, museum. “These paintings are part of a larger collection, Preternatural, that imagines the extraordinary unfolding of events in the untraveled landscape. The viewer can observe the alchemy of anger or the rebirth of life. No emotion is steadfast in fire.”

The paintings in the series are meticulously rendered in an unbound spirit of spontaneity. Scott is a colorist who has taken this work in a new direction, building layer upon layer of enigmatic flourishes to provoke a new understanding.

“These paintings are some of the best and most intense I have seen from this artist, and together, they offer a comprehensive visual exploration of fire, from tiny embers to raging infernos,” says Amy Scott (no relation), the Autry’s chief curator and Marilyn B. and Calvin B. Gross Curator of Visual Arts. ”They also have a surreal element, with mysterious additions such as an eye made of steam or a translucent owl that defies our understanding of the natural world. As such, they are complex narratives designed to make us question what we know about nature and how it behaves.”

The paintings help us consider our complicated emotions with fire and wonder at the destructive force raging throughout the West. The work has a freshness — a perspective that pays homage to the landscape painters of the past, while imposing a new awareness through the characterization of fire. 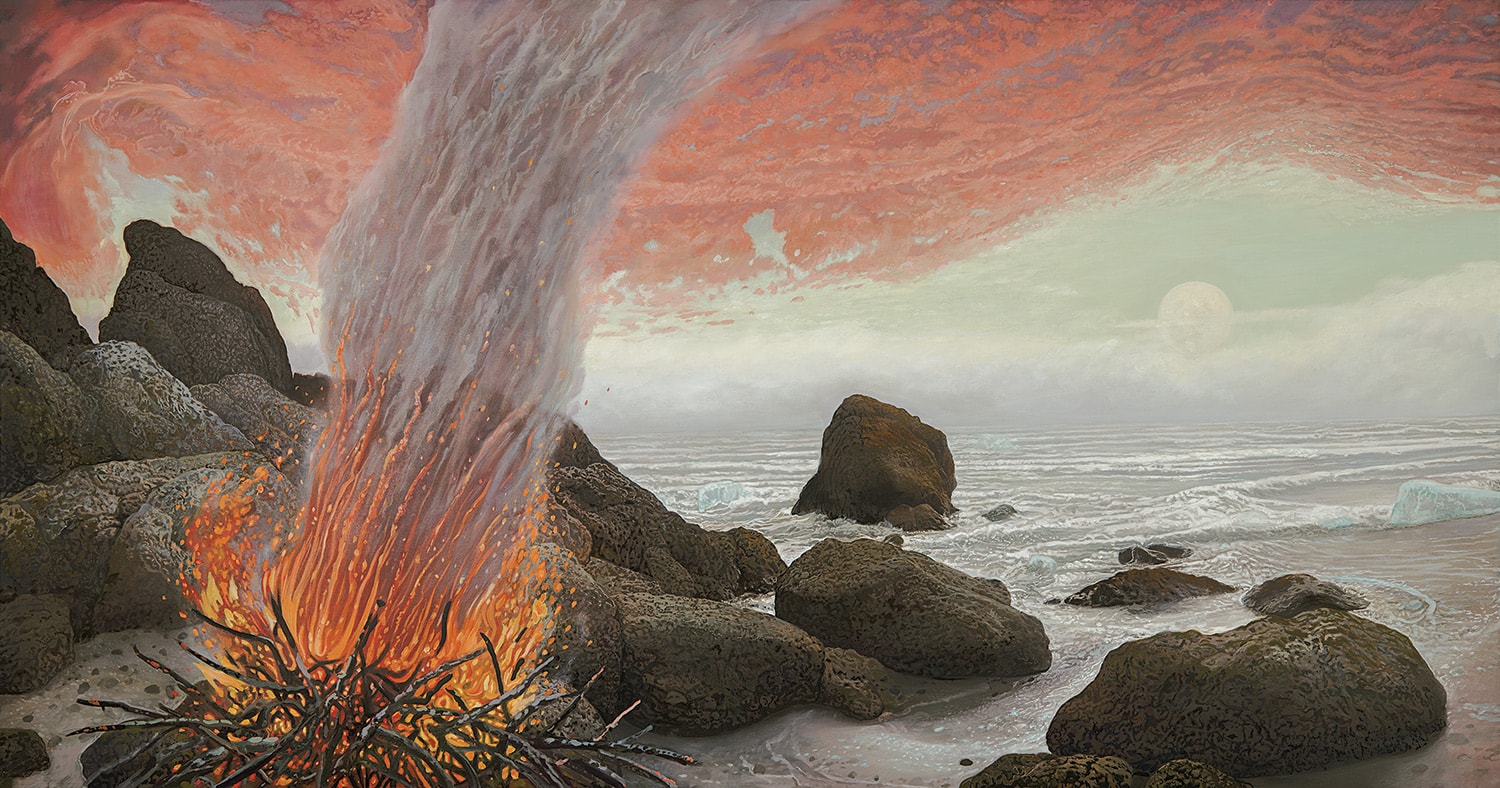 “Scott’s paintings are not landscapes in the conventional sense of the word,” says Michael Torlen, professor emeritus of Purchase College, State University of New York. “Neither are they an ironic spin on Thomas Cole and the landscapes of the 19th century of which they are akin. They are invented poetic meditations on the elements — air, earth, water, and fire.”

The comparison to Cole has merit. Perhaps the 19th century’s most influential landscape painter and considered the founder of the Hudson River School, Cole’s romantic representation of the American wilderness teemed with narrative and allegorical references. In a similar manner, Scott’s Winter Owl Over Fire, for example, is based on the fabled phoenix rising from the ashes, but the owl also holds the shape of an hourglass, creating a subliminal conversation on time and rebirth. Scott has returned to this subtext again and again in his work. 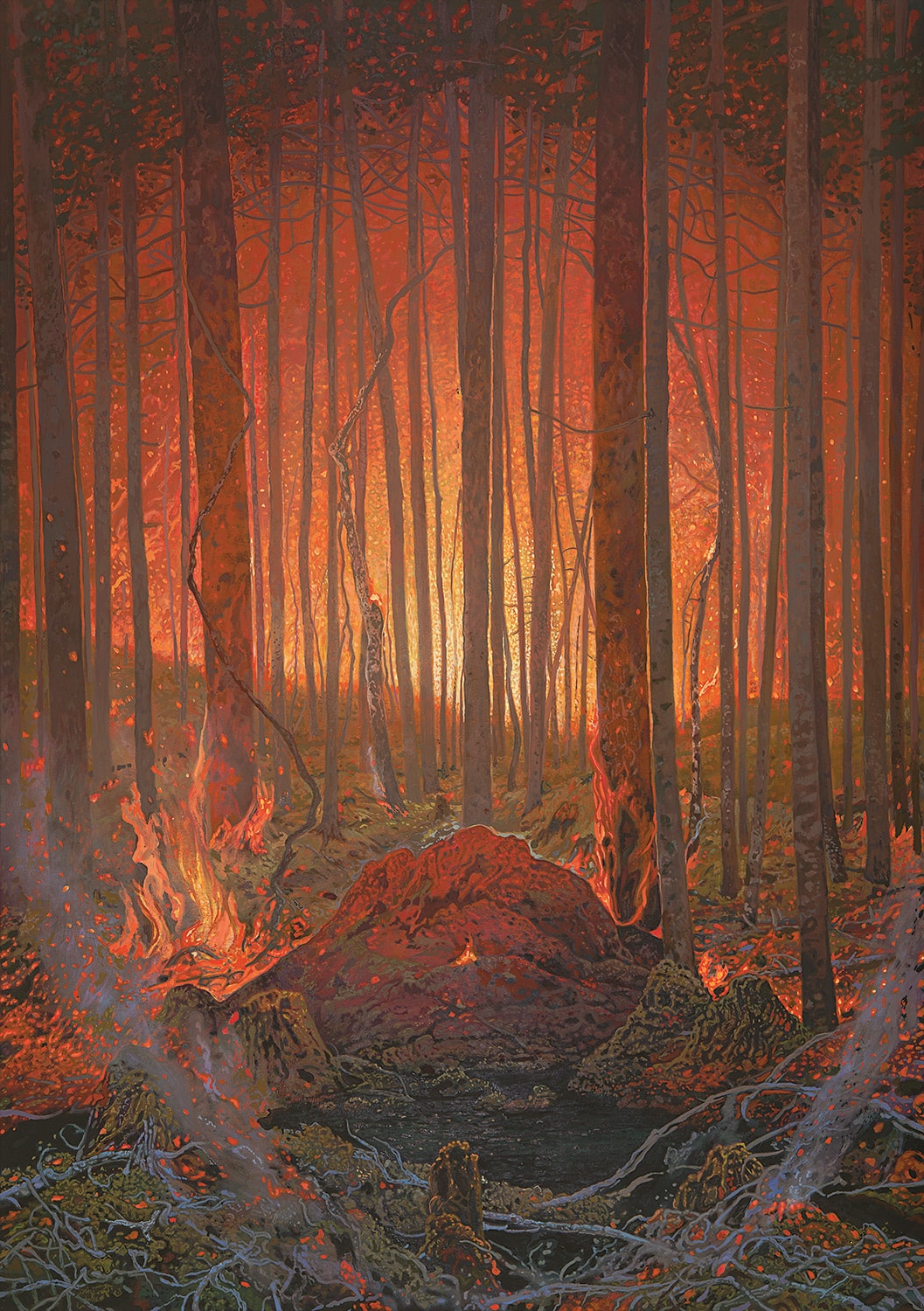 “It captures the magical quality of those creatures in that it portrays [the owl] as translucent, like it was drawn in by the fire of the painting,” says Amy Scott. “The rest of the painting is basically an abstract pattern of white snow, gray bark, trees, and moonlight that is beautiful in and of itself.”

In all five paintings, fire is portrayed as a transformative force shaping and reshaping a threatened landscape. Amy Scott suggests that Californians, in particular, cannot diminish fire’s importance, whether it takes form in historical burning practices of Native Americans or the devastating wildfires raging in the state.

The subject matter of Scott’s fire paintings comes from the scenic vistas of our national parks. Torlen sees additional meaning in the choice of setting these works there, in “the last vestiges of protected wilderness in the United States.”

Scott’s larger project, Preternatural: Reflections on the Natural World, is a collection of more than 100 works created from 2013 to 2018. They presuppose the miraculous in the mundane and the supernatural in the unobserved phenomena of the forests, plains, and mountains around us. Scott chooses not to restrict the landscape by reducing it to a mere imitation. He seeks, as a painter, to know the unknowable, to weave a story that suggests what is happening just out of sight. 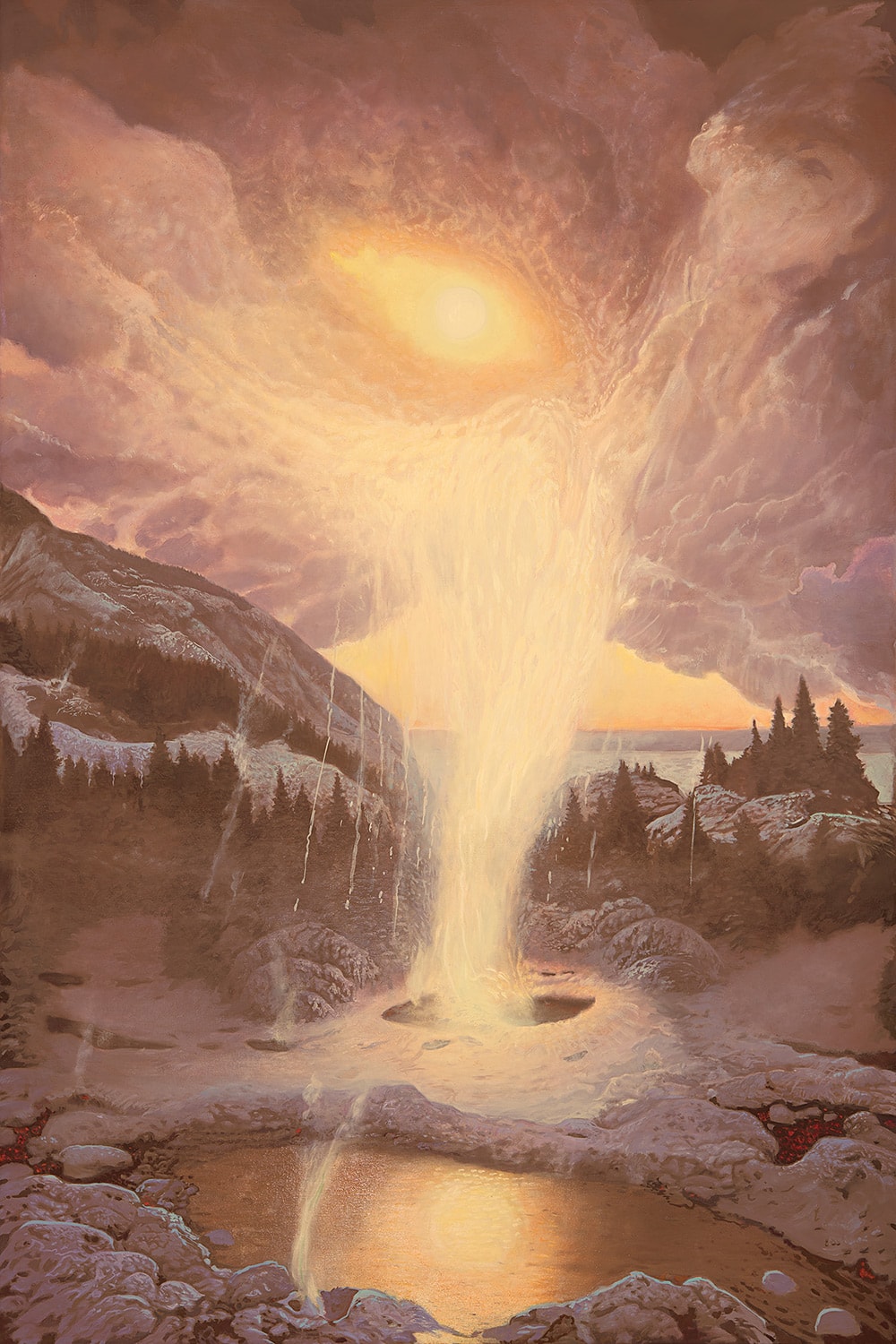 “He’s known for narrative work, but in this series in particular there are no figures, animals, or still-life elements through which stories can be read, which means that the narratives are more subtle, nuanced, and open to interpretation,” says Amy Scott. “Fire is really the main character, and how it behaves in any given painting creates a story of that place and its role in our collective memory.”

Scott is a native of Lawrence, Kansas, and a resident of Santa Fe, New Mexico. He’s best known for his symbolic iterations of the big artistic questions: the difference between value and worth, unlocking creativity, and the search for inspiration.

“Metaphorically, painting is the struggle for understanding,” Scott says. “And in this collection, [there’s] an understanding of the importance of keeping the natural world natural. Fire engenders life. Nature provides a path to enlightenment.” 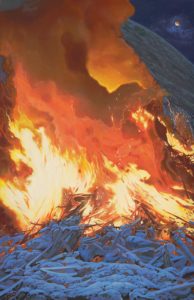 Scott has been an artist as far back as he can remember. His interest in landscape painting was first kindled when he received a fellowship to the Skowhegan School of Painting and Sculpture in Maine. While studying there, he worked with Alex Katz and Rackstraw Downes — landscape and narrative painters in the tradition of Fairfield Porter.

His career has encompassed both figurative and still-life works and series of complex allegorical narratives that are accompanied by books that further elucidate the story. Scott exhibited landscape paintings in New York City and Chicago, Illinois, and he came to national acclaim when he was selected for the Corcoran Biennial in 1989. “I had a career in Chicago and New York for 18 years,” the artist says, “with paintings that portrayed my concerns for the landscape, for the environment, and for the future of those sacred places.”

Dr. Jim Sanitato has been a collector of Scott’s work for more than 28 years. “I have seen the evolution of Michael’s work from the virtuosity of his landscapes, to the allegorical paintings, and now landscape paintings on a grand scale,” says Sanitato. “His landscapes are masterful pieces that rival in scale the work of Wilson Hurley.”

Scott’s work unveils a longtime interest in the land, the spiritual, and the mystery of the American West.

“The cold facts of the physical world cannot be more dissimilar to the pure sensations derived from our wild places,” says Scott. “I choose to participate in a conversation of the unknowing.”

Editor’s Note: On Fire: Transcendent Landscapes by Michael Scott is on view at the Autry Museum of the American West in Los Angeles, California, through July 28, 2019.