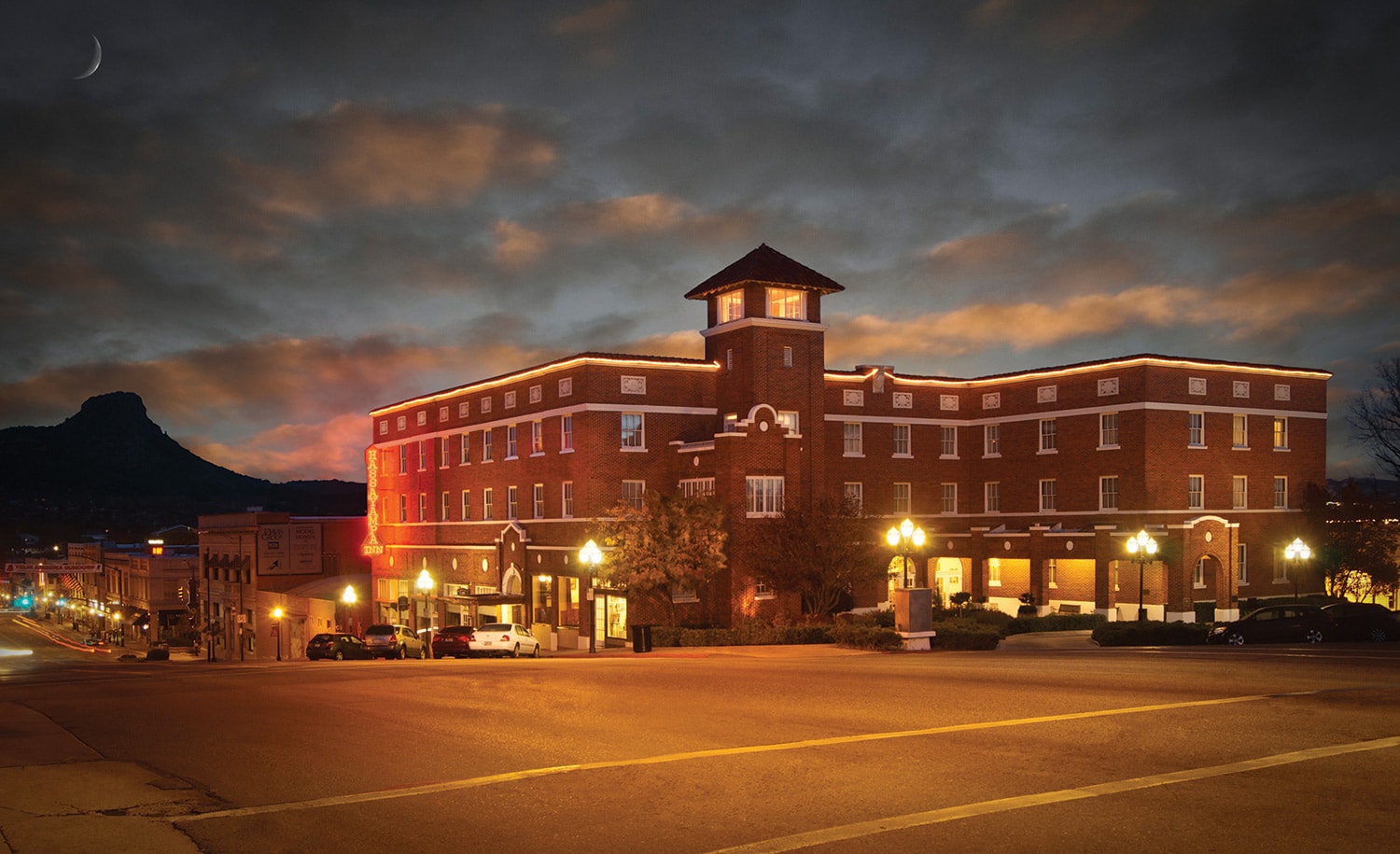 The Hassayampa Inn is located in downtown Prescott, Arizona. It was designed by architect Henry Trost and completed in 1927.

Blur a few details, and the Hassayampa Inn refocuses on another time: Calvin Coolidge is president; the improved Model A is replacing the iconic Model T on American roads; America is partying in speakeasies; and the Great Depression approaches stealthily, inexorably. 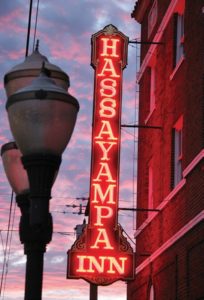 During the “Roaring 20s,” architect 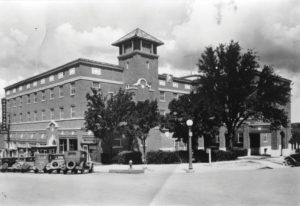 Henry Trost from El Paso, Texas, was “challenged” by the citizens of Prescott, Arizona, to design a grand hotel that would anchor downtown. Citizens bought shares in the project for $1 each, and the construction of the red-brick building was completed in 1927.

Once called “The Jewel of the County,” the Hassayampa Inn is a brick structure, mixing Spanish Colonial Revival and Italianate aspects, including arches and a campanile with an illuminated pinnacle. Its distinguished architect, Trost, also completed such Southwest masterpieces as the Luhrs Tower (1929) in Phoenix, Arizona, and the O.T. Bassett Tower (1930) in El Paso, Texas.

The hotel is named for the Hassayampa River, which flows through Central Arizona in Yavapai County. The river mysteriously sinks beneath the surface for much of its 100-mile journey. The Apache word “Hassayampa” loosely translates to “the river that loses itself.” 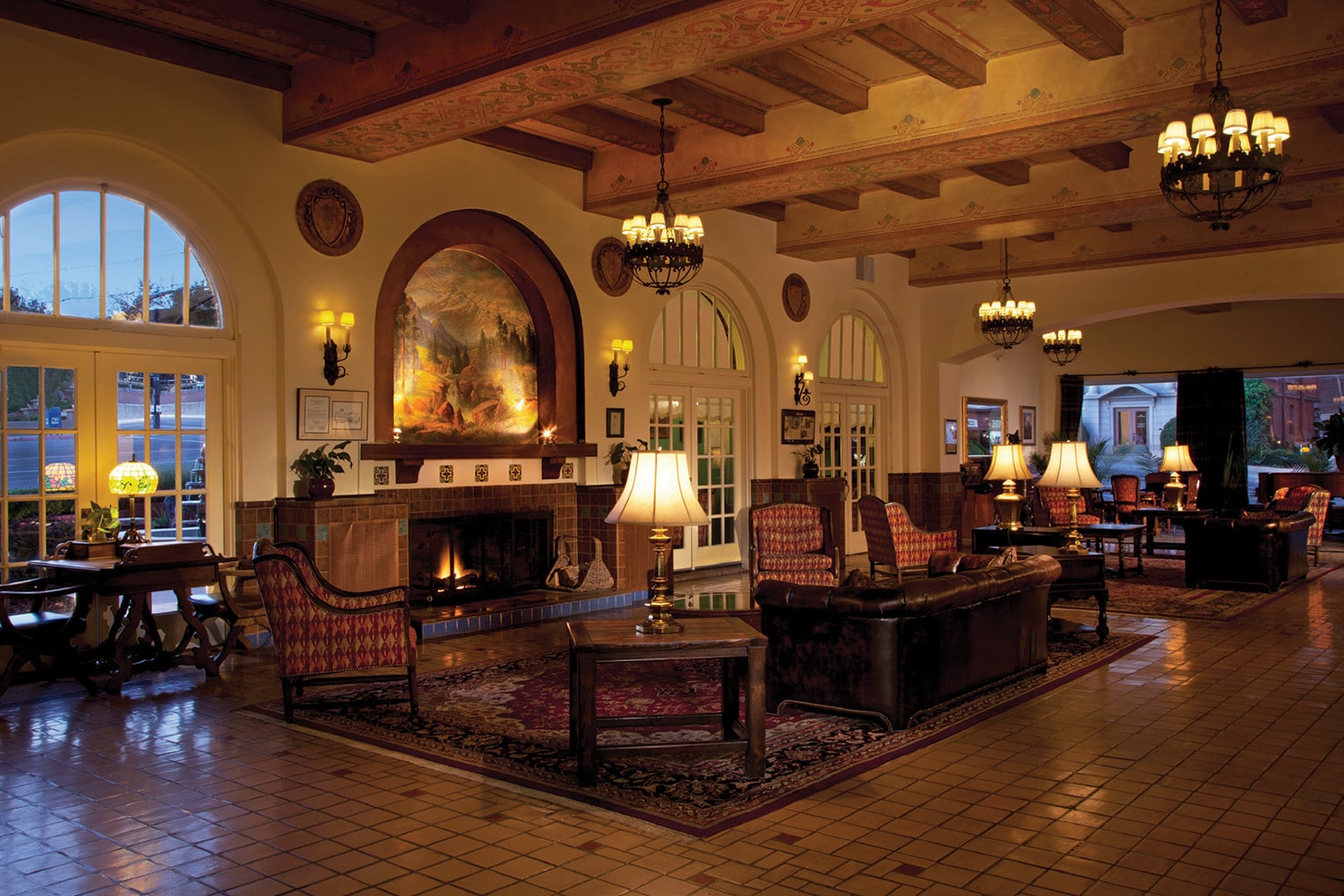 The lobby is centered around the fireplace and an arch-framed landscape, painted by Ronald Hedge in 1978. 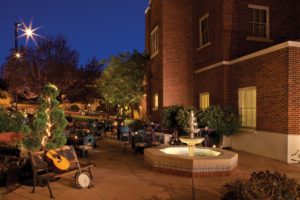 The inn’s courtyard and fountain offer an area of respite. 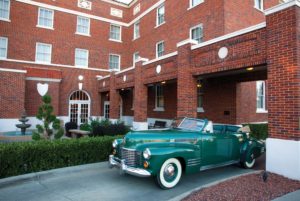 Today, the building is listed on the National Register of Historic Places. The four-story hotel offers 67 rooms, including 12 suites, and remains the grand dame of this small city of 40,000. The hotel’s restaurant, the Peacock Room, serves fine American and Southwestern cuisine, and the lobby is pure joy. Sit by the hearth and enjoy hand-painted wood ceilings, etched glass, wrought-iron chandeliers, an Otis elevator, embossed copper panels, Tiffany lamps, bronze statues, original paintings, and glazed tiles.

Next to the lobby, the Peacock Room serves breakfast, lunch, and dinner daily.

A block from the hotel is Prescott’s Historic Square, with the landmark Yavapai County Courthouse, opened in 1916 and designed in a Neoclassical Revival style. On the Montezuma Street side of the plaza is famed Whiskey Row, with the state’s oldest restaurant, the Palace Restaurant and Saloon, founded in 1877. A massive fire swept away eight blocks of predominantly wooden structures, including this one in 1900. Less flammable materials, such as brick and stone, replaced these, reiterating an urban theme of the American West. 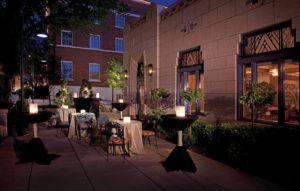 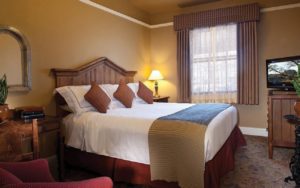 Combining antique furniture with classic Southwest décor, the rooms also have all the contemporary necessities.

The landmark city square is where Teddy Roosevelt’s Rough Riders gathered May 4, 1898, prior to joining the Spanish-American War. (A famous Solon Borglum equestrian statue of Bucky O’Neill marks this.) Here, on the courthouse steps, Arizona senator Barry Goldwater announced his presidential candidacy in 1964. His uncle, Morris, was a pioneer shopkeeper, legislator, and mayor who helped promote the Hassayampa Inn to investing citizens.

History is in the hotel’s guest book, too: Tom Mix made black-and-white Western movies in Prescott in the 1920s and early 1930s, staying at the inn. Will Rogers, Greta Garbo, Clark Gable, Georgia O’Keeffe, Tom Selleck, The Beach Boys, Senator John McCain, George W. Bush, and many others have all enjoyed the Hassayampa Inn’s distinct charms. And then there’s the friendly, but sad, ghost of Faith Summers, who booked a balcony suite for her honeymoon and whose spirit amiably wanders, awaiting the return of her jilting husband.

Says Penny Allphin, vice president of sales and marketing for Prescott-based Aris Hospitality: “We are a living museum — with luxury linens and flat-screen TVs.”