Located in Idaho’s Teton Valley with long views across rolling agricultural fields to the Teton Range, the 7,000-square-foot house was designed to reference regional homes built by early settlers. Like the original ranch compounds found nearby, two small log cabins abut a central two-story wood and stone ‘barn’ structure, creating the sense of an agricultural compound.

Architect Chris Moulder has always been fascinated with old farm structures and ranch compounds. A Connecticut native, he grew up surrounded by old buildings, spending his summers working construction on historic restoration projects. One of the more memorable jobs, he recalls, was working as a laborer on a 200-year-old mill in New Hampshire. “I spent an entire summer cutting apart staircases that didn’t have a single nail in them. They were constructed using simple mortise and tenon joints,” the architect says. He worked on another home built almost entirely of chestnut, a tree species that disappeared from the forests of southern New England in the late 1800s due to blight. “One hundred and thirty years ago, homes were built from the nearest available material,” he says. “Today, any chestnut we are able to find comes from agricultural buildings built more than a hundred years ago.”

Moulder and his wife (and current office manager) Jolene met at Kansas State University. “Jolene grew up in far west Kansas on a farm that was homesteaded before Kansas was a state,” he recalls. “The deed to the farm is signed by President Harrison.” It was on this farm that Moulder discovered his lifelong interest in vernacular architecture. “History suddenly became very important to me,” he says. “I became fascinated by the stories behind each building.” Functionality, practicality, and methodology became essential to his architectural studies, and ultimately, his professional practice. 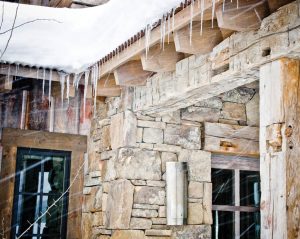 Now, more than 30 years after putting down roots in Jackson, Wyoming, Moulder and his business partner Kurt Dubbe’s architectural firm maintains a deep commitment to the history and design legacy of the region.

When a couple from Southern California was looking for an architect to design a retreat for their family of six in the Teton Valley, they were immediately attracted to Dubbe Moulder Architects’ extensive portfolio that reflected the region’s architectural character. “We love the simplicity and beauty of farm structures,” says the homeowner. “Their clarity of form and clean lines feel certain and, in a way, quite modern.” 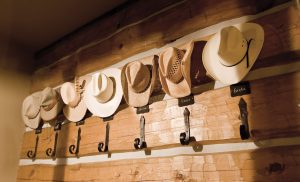 An antique hat rack in the entry is one of many whimsical antiques collected by the homeowners.

For many years, the homeowner’s parents lived in the area, so for the family, finding a place to develop their own roots was akin to returning home. The property, which is located west of Victor, Idaho, and borders national forest land, was an alfalfa meadow when the owners found it. In fact, says the wife, an old foundation was discovered in the exact location where they chose to site their home, no doubt a sign that previous inhabitants had also been drawn to the dynamic and ever-changing patterns of light and shadow swirling across the rolling agricultural Teton Valley landscape and mountain range beyond. 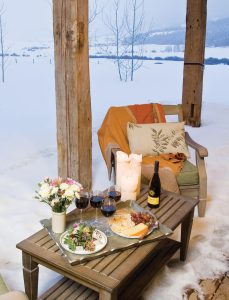 Moulder and his team modeled the home on the historic log cabin tradition that reflects the human settlement patterns and construction techniques of the 19th century. Just as single cabins evolved into larger building compounds to meet expanding family needs, so too was this 7,000-square-foot home designed with historical precedent in mind. As if built over many years, two small log cabins (each with a covered porch, a fireplace, and a private view) and a two-story wood and stone “barn” structure (complete with kitchen, dining room, and living room) are joined together by hallways lined with glass. 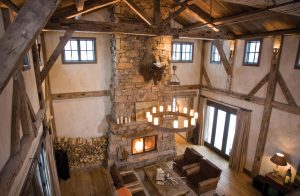 Light and shadows bounce off the decorative timber trusses in the living room with soaring 24-foot-high ceilings. An antique chandelier floats from a pulley system rigged between the trusses.

The evolution of a story was important to the family, says the homeowner. “Chris’ concept is based on the idea that these simple structures, built over time, were then connected to create one unified home. We loved the idea of creating a sense of history with our home,” she says.

A feeling of genuine warmth and protection emanates from the scale, lighting, natural materials, comfortable furnishings, earth-tone colors, and subtle textures found throughout the home. The interiors, designed primarily by the wife, are meant to comfortably and flexibly accommodate an intimate gathering of two or a large group of 20. Doors and windows open to the outside, and expansive covered porches look out on a landscape that shimmers with the atmospheric quality of a Russell Chatham painting. 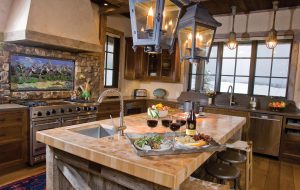 The homeowner scoured local antique stores for unique furnishings — such as the carriage lamps over the kitchen island — to complement the rustic finishes. In the kitchen, a tile mosaic of the Teton Range forms a colorful backsplash over the oven.

On the exterior, Montana moss rock, randomly laid with deep raked joints to give the walls a dry-stacked stone look, adjoins a horizontal board-and-batten siding made from recycled timber. Posts and beams, sourced from a barn in Wisconsin, display the remnants of wood joinery from another era. Above the porch and adjacent to a signature dormer located over the front door, thick horizontal planks, offset from the home’s underlying plywood shell, provide protection from the prevailing wind and weather patterns and create a shadow that adds dimension to the facade. 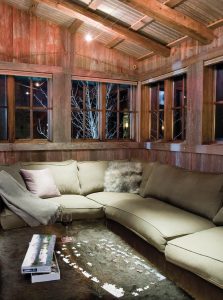 The planks are remnants from miles of snow fence installed to protect highways and interstates from blowing and drifting snow. The idea to incorporate them into his architectural projects came to Moulder while he was driving through Wyoming. “Over the years,” he explains, “the fences, which have been out in extreme wind and weather, disintegrate, and the highway department has to replace them.” Instead of destroying the planks, which are milled from Douglas fir, the state sells them. Moulder purchased large quantities of the material because, he says, “It’s the perfect application for an authentic and durable rustic exterior.” 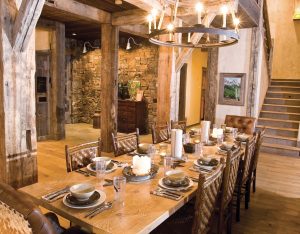 A series of structural reclaimed posts and beams separates the open dining room from the living room and kitchen. Stairs access the cozy bunkroom directly above.

Recycled timbers take center stage throughout the interiors as well, creating an atmosphere that is at once subdued, rustic, and completely in character with the outdoorsy lifestyle of a large and active family. Decorative timber trusses, their mortise and tenon joints visible in the ever-changing light and shadow of the soaring 24-foot-high central living room, add unique character. Elsewhere, wood that’s used both structurally and decoratively bears the marks of original joinery and hand-tooled work, imbuing it with a sense of history and authenticity. 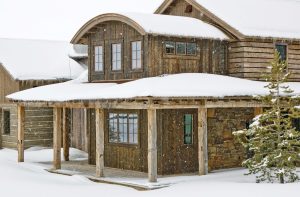 “The wood in this home holds so much history,” says the homeowner. “We never tire of its incredible detail and artistry.” For his part, Moulder couldn’t agree more. “When a client allows you to use historic materials in a very contemporary way, the heritage of the project rises to the light in a truly satisfying manner.” 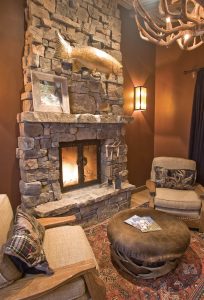