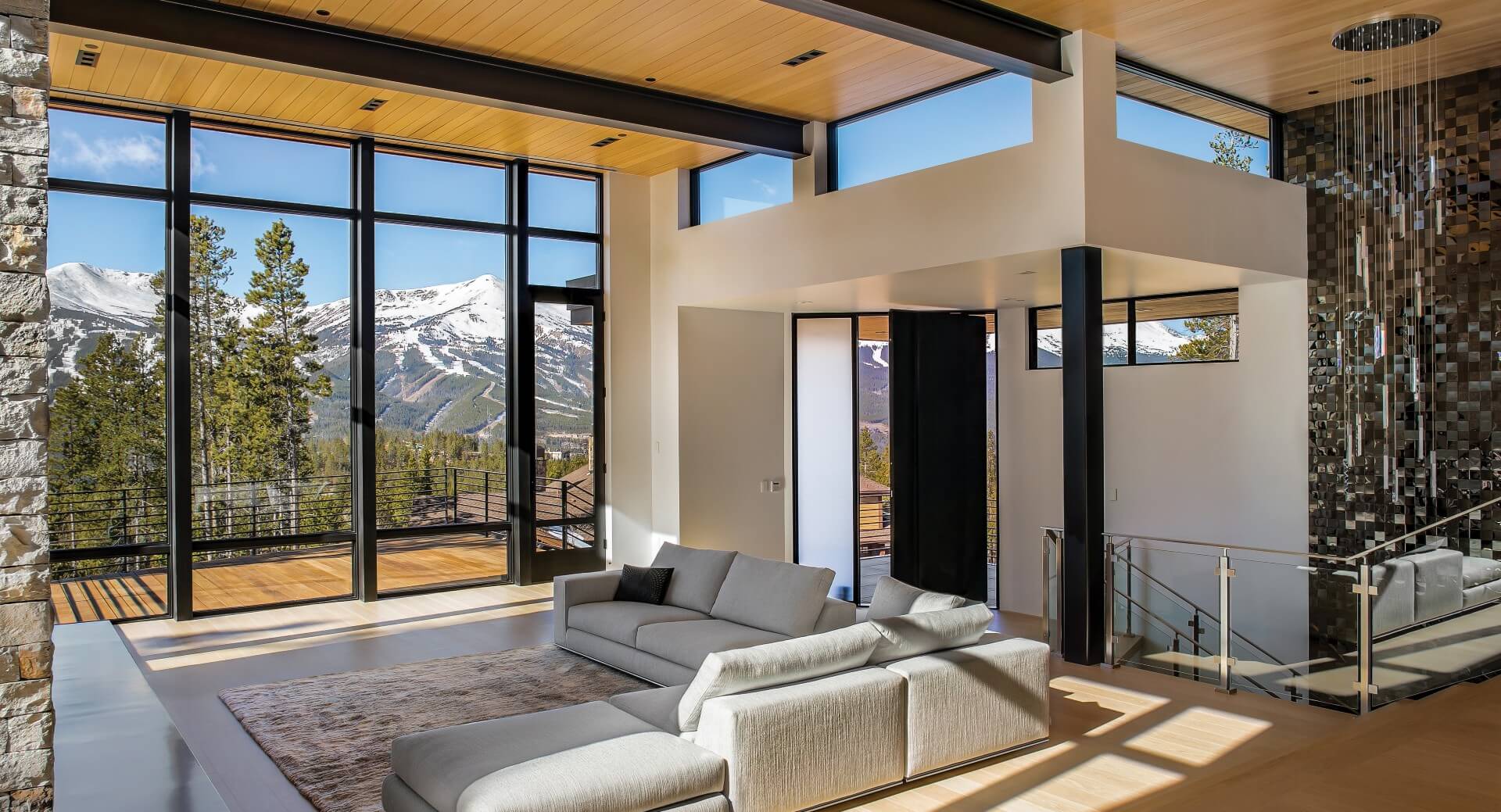 The home’s living room faces west toward Breckenridge Ski Resort, offering immense views of the ski runs during winter. The room has oak floors and clear vertical grain hemlock on the ceiling, which reaches 14.5 feet high.

08 Nov Think Outside the Box

Richard and Vanessa Smith’s sleek and modern home overlooking Breckenridge Ski Resort in Colorado is an unusual sight among the log cabin estates in the mountain community. There’s not a rounded corner throughout the 6,962-square-foot structure that nestles into Bald Mountain ridge. With its flat roof and square composure, the home rises to capture the views and makes a modern statement amid its mountain setting. 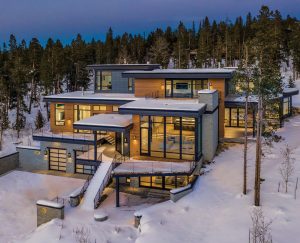 “It was a lot of fun and challenging to work in mediums that we just don’t do a lot of up here. This is a whole different look,” says builder Ethan Guerra of Avalanche Construction. “The box look can be very appealing. This is not what most people would see as a cabin unless you start going into Scandinavian countries, which have definitely moved in that contemporary look for cabins.” 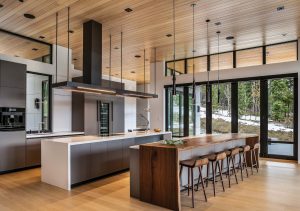 The kitchen includes a breakfast bar with a countertop made of natural edged walnut. Folding doors open to a covered patio area. The cabinets are custom, and many of the appliances are hidden behind paneling.

Guerra has worked in Summit County for 30 years, and he says that modern homes are becoming more common in Breckenridge, despite the city’s traditional building codes. “We started moving away from the heavy logs and the emphasis on a lot of wood and going more with clean lines,” he says. But the flat roof on the Smith residence makes it an anomaly even among the more contemporary structures in the area, which need to accommodate heavy snow loads during the winter. To accomplish the level roofline, designer and project manager Tim Sabo of Allen-Guerra Architecture designed a drainage system that routes through the home’s interior to help offset the snowmelt. 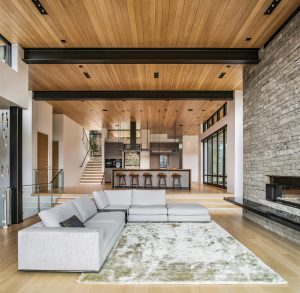 An open floor plan connects the sunken great room and the kitchen. The rooms step up with the topography of the site, rising from the great room to the kitchen to a cozy den beyond. Clear vertical grain hemlock runs the length of the ceiling, which also incorporates exposed steel beams. A gas fireplace with a stacked chopped granite chimney carries the exterior finishes indoors.

“Rustic mountain architecture allows you to get away with more,” Guerra says, adding that curves allow builders to finesse the edges together. “When you are building something linear, anything that doesn’t line up jumps out at you. It’s a different approach to building.”

Completed in 2018, the home is called “Huia” after an extinct forest bird of New Zealand, where Richard was born. According to the Smiths, Richard’s father was given the middle name Huia to recognize his time with the Maori as an Anglican Minister. The huia is sacred to the Maori, who wore the distinctive tail feathers to signify rank and gave them as signs of friendship and respect. 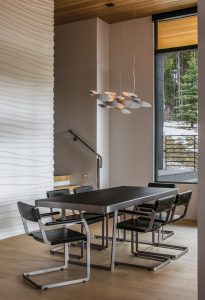 The home’s design is contemporary and clean, with a warm and natural palette. That neutral style is intentional, says project manager and designer Tim Sabo of Allen-Guerra Architecture. “The clean simplicity of the house allows the eye to focus on the majestic views across the valley to the Ten Mile Range, the ski area, and the town of Breckenridge down on the valley floor.”

The Smith residence has four bedroom suites and several areas for recreating, working, or exercising. It unfolds on multiple levels connected by staircases, but it was designed so that the homeowners could age in place, describes Sabo. The property includes an elevator that lifts from the three-car garage to the fourth floor, where there’s a rooftop patio, recreation center, and movie room. The homeowners worked directly with Sabo and his wife, Suzanne Allen Sabo, to plan the home’s interiors in a mountain-modern style. 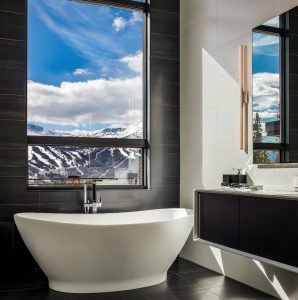 The bathroom suite includes large-format tiles and a free-standing bathtub.

“The [Smiths] definitely influenced that modern contemporary look,” says Guerra. “Vanessa was very involved during the construction of the interior and exterior design. We worked very closely together. This allowed their ideas to be directly translated into the architectural and building outcomes,” he adds, acknowledging the process was challenging with the homeowners living in Hong Kong and Switzerland during the build. “Long emails, hundreds of late-night calls, and a collective passion by all in the team made for the finished product.” 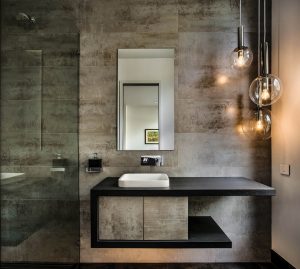 A floating vanity helps the home maintain its streamlined and sleek aesthetic.

Floor-to-ceiling windows that stretch 14 feet tall capture the mountain views to the west, encompassing the Tenmile Range and Quandary Peak, the 13th tallest mountain in Colorado at 14,265 feet. The Smiths can also peer out over Breckenridge ski resort, a view that’s nearly identical to the ski trail map, given that the home sits at the same elevation as the middle of the ski hill. “It’s a pretty open design and very expansive,” Sabo says. “No matter where you are in the house looking across the valley at Breckenridge, you have the perfect view.” 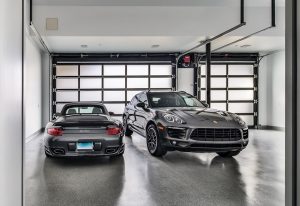 For structural support, the home features exposed steel throughout the interior and exterior. Clear vertical grain woods, such as pine and cedar, were used in the ceiling and siding. These were sorted at the mill and cut to avoid knots to help emphasize the home’s clean-lined aesthetic. “All the materials we chose were natural,” Sabo says. “We didn’t want it to be something that was too cold, so the finishes we selected are warm to help with the overall feel of the house.”

The upstairs recreation room includes a bar and access to the rooftop deck. Recessed black-out shades cover the windows during movie nights, and solar shades keep out the harmful UV rays by day.

Guerra says homes like this set a precedent for the area. Since its completion four years ago, the Breckenridge subdivision has gained a few more modern homes, including one just up the hill. “I have had people go by and look at that house to give an example of what is possible,” he says, “to think out of the box of what we normally see here.”