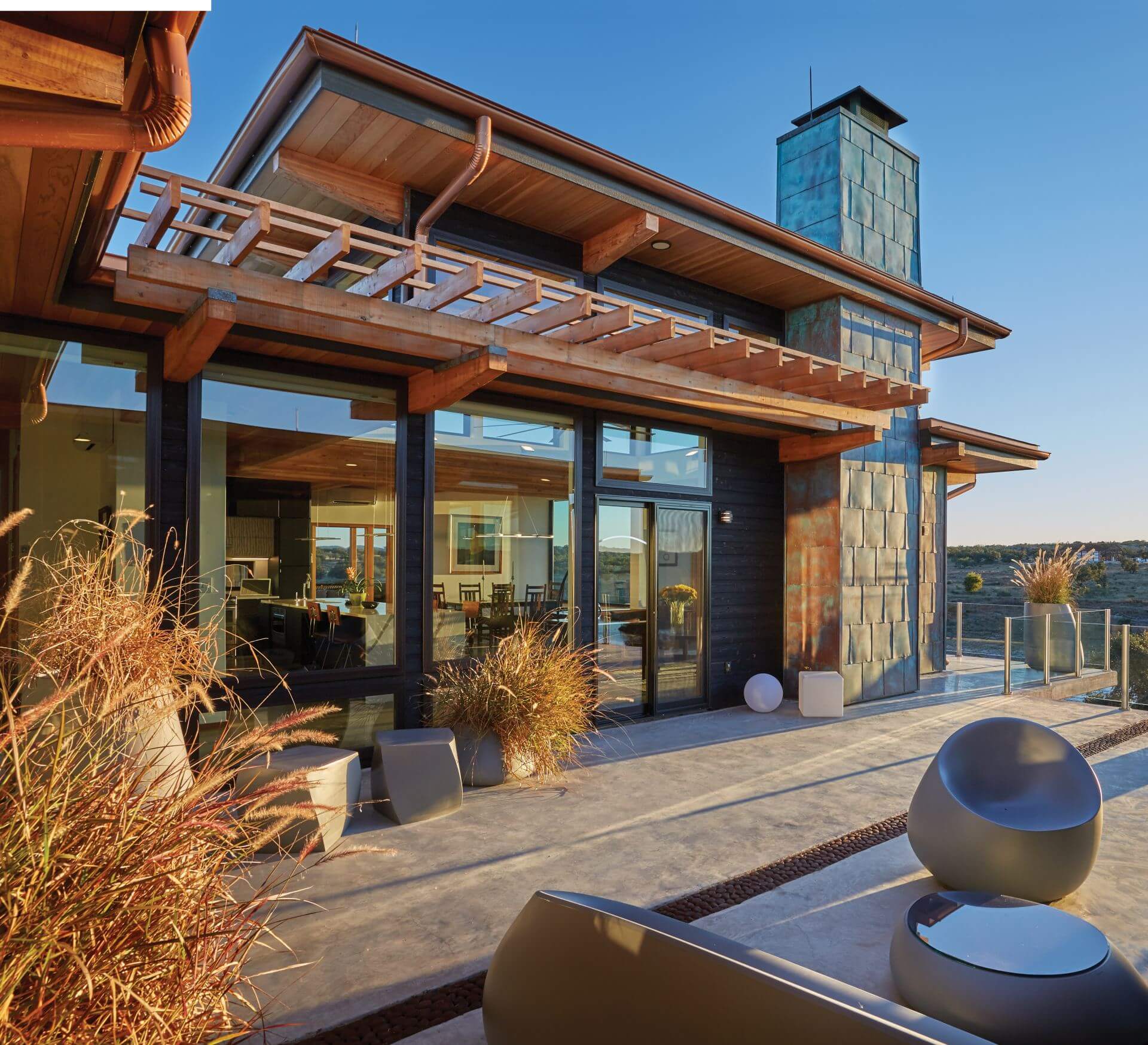 Large expanses of glass are dazzling when juxtaposed with the chimney’s copper tiles. Vondom, a Spanish furniture and lighting company, designed the recycled plastic courtyard furniture and planters. The arbor blocks the late afternoon sun in the summer months.

For more than 15 years, Jeff Derebery worked on a design for his ideal home. As a builder for more than three decades, he’d experienced and constructed many different architectural designs and styles. One thing he knew without a doubt was that he wanted his home to have a central courtyard. And he also wanted a post-and-beam structure.

The method of vertical posts and horizontal beams joined with hardwood pegs dates back to the 16th century. Advantages of a post-and-beam building include greater design flexibility, with fewer interior walls resulting in larger open spaces. The high-density timbers also provide strength and fire resistance. 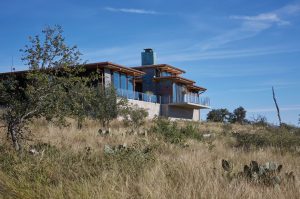 Situated on a hilltop, the home is surrounded by natural grasses and indigenous plants on 15 acres.

As the time came for retirement and building his dream home, Derebery and his wife, Janice Fischer, a professor at the University of Texas at Austin, purchased 15 acres of wild, scenic land. A quarter mile of the property borders the Pedernales River, a tributary of the Colorado River that runs through central Texas, where eagles and ospreys soar.

The couple lived in the Pacific Northwest for a time. They’d seen numerous post-and-beam homes, many designed by Lindal Cedar Homes, a manufacturer of such prefabricated homes based in Seattle, Washington. During the planning stages, Derebery sought them out. “Post-and-beam homes are not the norm today,” he says. “Most all are built with a third party because of the structural engineering skills required. Lindal is a leader in the field. They offer a complete package.” 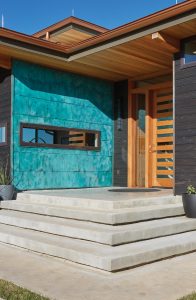 Since its start in 1945, Lindal has specialized in helping clients design and build their homes with efficient kits. The company offers more than 2,000 floor plans for post-and-beam structures. Brent Hughes, owner of Majestic Peaks Custom Homes, a Lindal Cedar Homes representative as well as a structural engineer, introduced Derebery to the Hestia style, which was close to what the homeowners had envisioned for their dream dwelling. 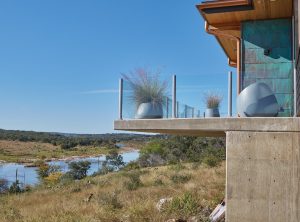 A cantilevered balcony off of the dining room looks over the courtyard below and landscape beyond. Falcon Railing MFG, a company based in British Columbia, manufactured the railing.

Architectural designer Aris Georges of OM Studio created the Hestia for Lindal. He founded the studio after having been a fellow at Frank Lloyd Wright’s Taliesin West for more than 30 years. An expert in Mid-century Modern architecture, Georges relates that OM “stands for Organic Modern, blending the two primary traditions of 20th-century architecture — Frank Lloyd Wright and European Modernism — and bridging the two places where I was educated and formulated my position about design.” 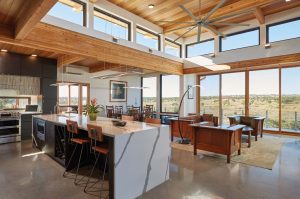 Clerestory windows bring additional light into the spacious living, dining, and kitchen areas. The large windows overlook the courtyard on one side and the vast landscape on the other.

Georges and Derebery’s collaboration on the project resulted in a single-level structure, with the addition of a garage wing, an expanded homeowner’s suite, and a screened-in porch. “[Derebery] had some minor changes that didn’t alter the original design in terms of spaces and overall structure,” Georges says. “Due to the fact that he had built a large number of homes in his career, it was clear that he understood the design and wanted to keep it as intact as possible.” 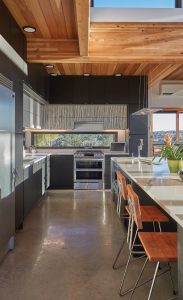 Low-maintenance concrete floors were used throughout the home.

“My original vision was for a home at ground level; I was assuming a Zen garden with a house surrounding it. But the land we bought had incredible views of the Pedernales River, and where I wanted to build had a steep slope of 70 feet,” Derebery says.

“[Derebery] wanted to be as close as possible to the Pedernales River, where the ground was gradually getting steeper,” adds Georges. “I urged him not to put the house on a pedestal, as it would ruin the view from the river. We met halfway. He pulled it back a bit, and we decided on a cantilevered part off of the outdoor concrete floor that adds a very important shadow line to the design, softening the perception of a box. I have since been insisting on this feature in other designs with a box under the house.” 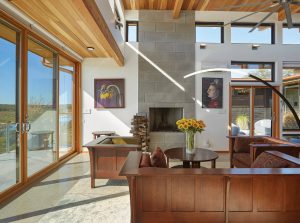 The  home also used materials suitable for the hot climate. For the exterior, he chose a charred Japanese cypress siding imported by Nakamoto Forestry called yakisugi or shou sugi ban. The traditional process of charring the wood removes hemicellulose to leave behind its structural components, resulting in improved longevity, low maintenance, and fire resistance. 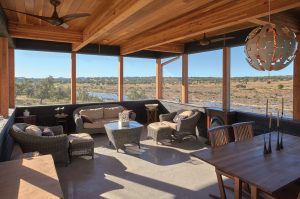 This screened-in porch was an addition to the original floor plan, allowing plenty of space for family dining and entertainment.

The exterior also includes a wall of custom patinated copper tiles designed by Derebery. Because of the Texas climate, he knew the copper would turn a dull brown and that it required acidity to change color. With the help of ordinary household vinegar and the garden product Miracle Grow, he experimented until he created a color close to turquoise, which he says “mimics the color of the Pedernales River when it is not flooding.”

The homeowner designed the copper tiles, adding the patina after they were installed.

The appearance of the exterior is striking with its charred siding, patinated copper panels, and large glass windows that reflect the landscape. The garage doors are unframed glass from the Envy Collection by Overhead Door. From the outside, they look like a black mirror; but from the inside, it’s like peering through clear glass. “When clients like [Derebery] take no shortcuts and add their own flair to the design, it all becomes more impressive,” Georges says. 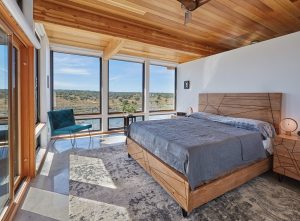 The homeowner’s bedroom suite looks out over the Pedernales River, where eagles and ospreys often catch their dinner.

As with the exterior, the interior details are not lacking. Concrete floors were polished with a 3,000-grit abrasive to a high sheen requiring little maintenance. The home’s ceilings are clear cedar. A full band of clerestory windows accents the main living area. Stickley furnishings chosen by Fischer fit well within the Mid-century Modern aesthetic, and contemporary artwork punctuates the walls. 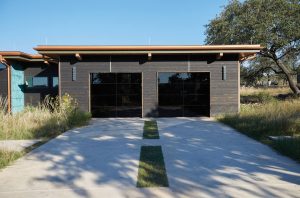 Garage doors from the Envy Collection by Overhead Door appear solid black from the exterior, but from the inside, they provide a clear view outdoors.

The 3,000-square-foot home is powered by 36 solar panels on a separate carport. Care was taken by Derebery, who served as the general contractor, to build the roof with commercial-grade foam panels that provided the necessary slope and met Energy Star ratings. The panels provide all the electricity, and the Dereberys regularly sell back power to their local utility. 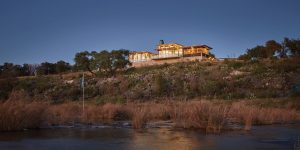 Sited on a hilltop, the home overlooks the Pedernales River.

Georges reflects on seeing the home after its 10-month completion: “I will not forget the first evening at the house. After having spent the entire day in and around the spaces, we sat in the living room, where you could see the exterior from the inside through the courtyard. [Derebery] told me how much he appreciated that. His extra effort and resources to ‘dress’ the exterior with special materials that were omnipresent from the interior is something most homes miss.”