Robert Townsend has spent his artistic career both fascinated and inspired by vintage Americana. His early large-scale watercolors focused on memories of Route 66 road trips with his family across the Desert Southwest. This early work eventually evolved into brightly colored Pop Art paintings depicting other elements of Americana: neon signs, candy, food, matchboxes, bottlecaps, desserts (in homage to one of his art heroes, Wayne Thiebaud), lollipops, clocks, and furniture. 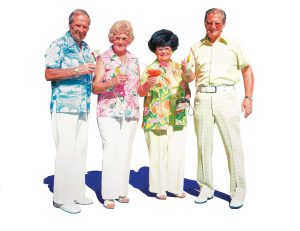 But then the Los Angeles-based artist made a discovery that would forever change the trajectory of his career.

He found a series of vintage Kodachrome slides introducing him to Helen Conley from Indiana. This Helen was not “the face that launched a thousand ships,” but a woman he discovered in 3,000 slides — images laden with polyester clothing, chrome-trimmed automotive fins, horned-rimmed glasses, airlines, roadside motels, Polynesian views, and seaside escapes.

So, how did Helen land in Townsend’s life and become his muse?

The artist spends a great deal of time searching for source material for his paintings. One decade ago, he bid on an eBay listing for 3,000 vintage Kodachrome slides. Once the slides were safe in his Los Angeles studio, Townsend started looking at the images, and they turned out to be a treasure trove of material — an entire family history recorded for posterity. And the celebrity of this history was Helen, a middle-aged woman living her American dream in the 1960s and ’70s with her husband, Roy. 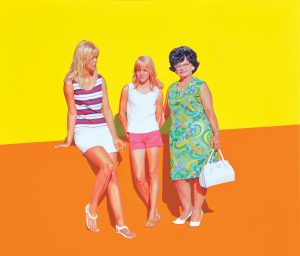 “I’d already been painting images from an occasional slide for a few years,” says Townsend. “This was different because it really focuses on one person. And more importantly, on an actual story of one’s life. However, I have a history of painting images related to the style of mid-century America, either landscapes or still lifes. They always tend to have an optimistic, joyous tone, and this series relates to that. In some ways, it feels like the fullest expression of that idea and feeling.”

Townsend discovered that the slides came from an estate sale in Highland, Indiana. From there, his journey led to meeting the family featured in the images. Since then, a documentary film has been created about the event, “My Indiana Muse.” The short film won numerous awards, including Best Short at the Beverly Hills Film Festival and Best Short Documentary at the San Luis Obispo International Film Festival. 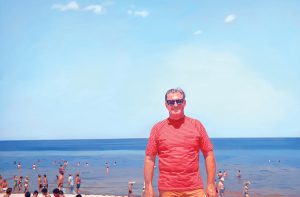 “For Townsend, Helen is more than a muse; she is the apotheosis of his oeuvre, spotlighting the glory and grace inherent in a life lived with self-actualized panache,” says Mark Tarrant, owner of Altamira Fine Art. “With her as a hero, each painting serves as a narrative time warp, a capsule of individual expression and transcendent character. As a whole, the series tells a story layered with practical and conceptual meaning.”

Altamira has found success with Townsend’s work at their galleries in both Scottsdale, Arizona, and Jackson, Wyoming. This December, they will represent his work at Art Miami for the first time. The exposure will serve as a defining moment not just for the Helen paintings but for Townsend’s career as well. 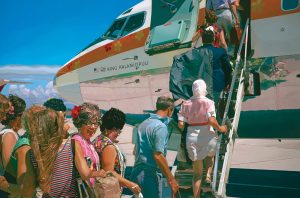 “We don’t know when our careers will end, and they do shift,” says Townsend. “But Helen has certainly been the most complete expression, the most cohesive thus far, and she and Roy have been wonderfully worthy subjects. When you are going to spend hundreds of hours on a painting, and many thousands of hours on a series, you really need a subject that is going to feel rewarding for that length of time.”

The fact that his subject matter is Helen and Roy, two people he will never meet, and the quintessential American life they led more than 50 years ago, is not lost on Townsend.

“There are some things about Helen and Roy that I’m not sure I could fully describe but which interest me deeply, daily,” says Townsend. “They went for life fully, and that is hugely important. As I discovered more about them, I only became more interested. They traveled extensively, loved their home, and were inspiring and loving to their family. On top of that, they appear visually quite fun-loving. There is a sense of optimism to which I am drawn. And they grew up in tough times, so there is a sense of enjoying what you can as best as you can, and that is inspiring too.” 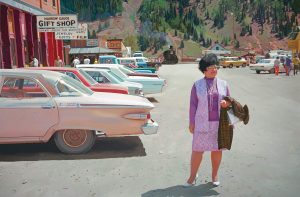 And those aspects of their lives are something Townsend hopes to achieve as a person as well. “I’m working on all those things in my own life,” he says. “And I am roughly the same age as they were in the images, so it is good to have them set a tone for me in a way.”

The paintings’ optimism and subject matter also shine through to viewers because of their monumental size. Working large, Townsend can focus more clearly on getting his message across to his audience. “Working big suits Townsend on many levels,” says Tarrant. “Large compositions recall his early work as a muralist. Also, scaling photographs up so people stand life-size makes their presence inescapable, forcing interaction. So, too, they make him commit as an artist.” Townsend wants not just for viewers to feel this but also to have it resonate with them.

“These days, angst is pervasive. Everything is heavy,” says Townsend. “This is the perfect time for this; the Helen series is something you too can celebrate. Let us have a good time together. My primary intent is an expression of the human condition. What it feels like to be here.”