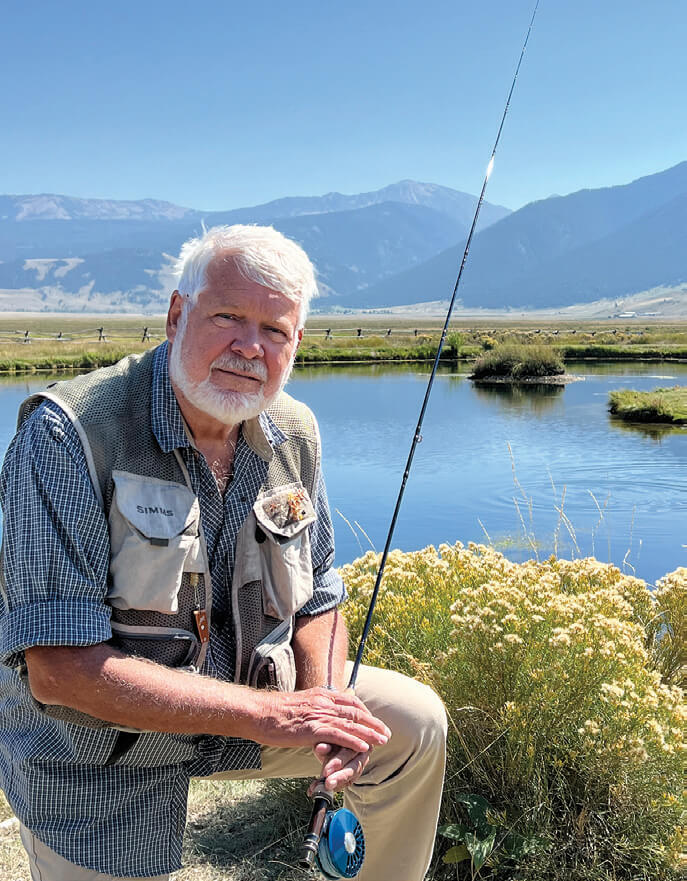 Mike Stidham may portray a wide variety of fish coveted by anglers, along with the land and waterscapes where the finny prey are found. But don’t mistakenly call him a fish artist. “I play with colors and masses and shapes,” laughs the ever-jovial painter, who lives in the Salt Lake City suburb of Sandy. “And at some point, I get it to look like a fish.”

That’s a likeably disarming attitude coming from a man who has long been considered not merely one of the finest artists of angling subjects but also, at one time, an outstanding fly fisherman and guide. He held the International Game Fishing Association world record for a hammerhead shark caught with a fly rod. And back in the 1990s, when he actually was trying to accurately illustrate rather than artfully depict his subjects, he completed commissions for t-shirts sold by L.L. Bean and Nordstrom; created images for enthusiast magazines like Fly Rod & Reel, Outdoor Life, and Fly Fisherman; and even designed the Texas 1992 Saltwater Gamefish Stamp. 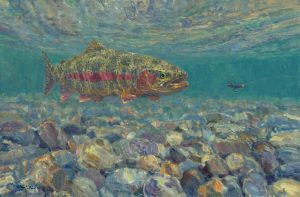 Stidham’s earliest aspirations were seriously artistic. Growing up in the late 1950s and early ’60s in Palm Desert, California, just southeast of Palm Springs, he admired the works of local artists like Jimmy Swinnerton, who set up easels outdoors to paint the dramatic, sere landscape and often sold their finished canvases roadside to passing tourists. “I imagined myself becoming a desert painter,” he says, adding that as a child, he “stayed in from recess and painted watercolors in the library.”

When he was in junior high, Stidham’s father, who worked as a contractor, began building condominiums in Snowmass, Colorado, so the family spent summers there. “And that’s where I got introduced to trout streams and eventually turned into a trout bum,” he says. In the early 1980s, it occurred to him that he might turn his artistic talent toward the subject. “I did a couple of trout watercolors, took them into local fly shops, and they sold. And I thought that maybe I could make a living as an artist.” Soon he transitioned into oils, and for a time, also included waterfowl in his repertoire. 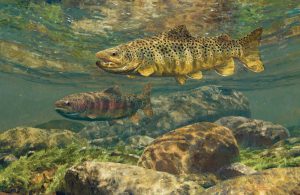 Fish and their surroundings, however, remain the top — well — lure for Stidham. Take, for instance, his recent work Alaskan Rainbow and Egg-Sucking Leech (the latter element referring to an artificial fly resembling a leech doing just what the name says). “To me,” says Stidham, “the painting is about the sense of place, the feeling of being there, the various colors of the rocks and rhythm and movement of the gravel bed.” To achieve that feeling, he’ll “get a big, fat brush and play with masses and shapes, then go in with a damp rag, cleaning up edges and wiping down areas and then redoing things.” Gradually, he’ll refine the composition, images, and tonal values until everything reaches glorious, impressionistic resolution. “It’s like fine-tuning an old analog radio,” he says. 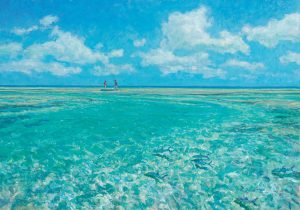