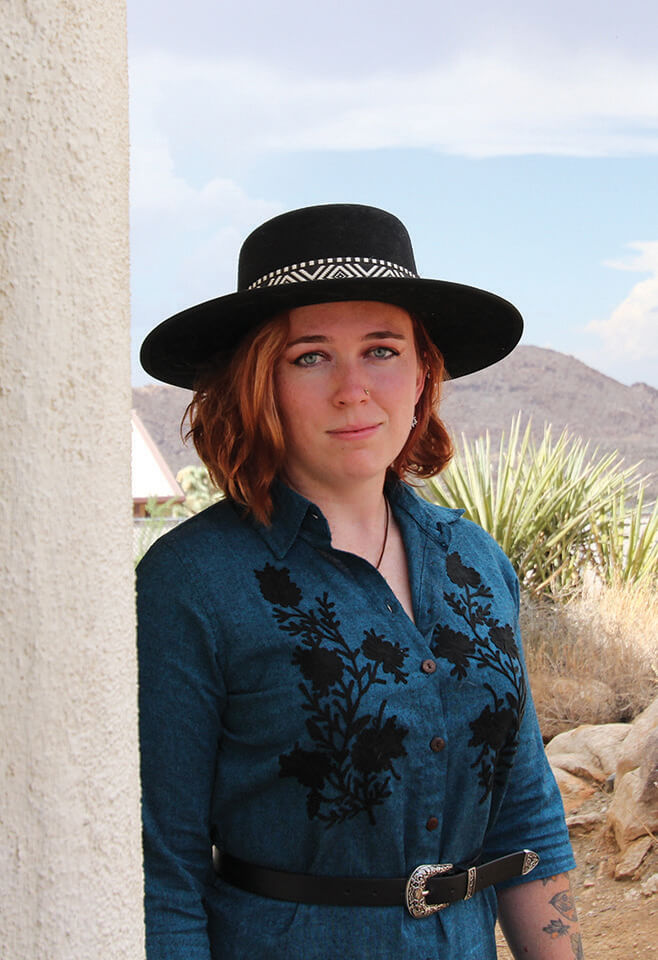 Taylor Crisp can pinpoint the moment she decided to become a painter. Seven years ago, soon after graduating from the University of Southern California’s School of Cinematic Arts with the goal of writing for television and film, she went to the now-departed Leanin’ Tree Museum of Western Art while visiting her brother in his college town of Boulder, Colorado. “I came across a painting by Ed Mell,” an artist widely admired for his grand landscapes. “It showed a monumental Western desert lightning storm, and I was struck by how he captured its feeling without being super-realistic.” 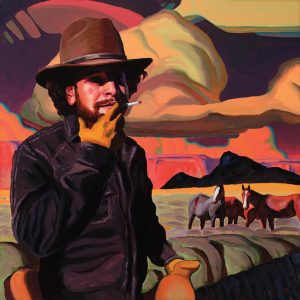 Afterward, she read more about the artist and learned of his admiration for the great early 20th-century landscape master Maynard Dixon. “Once I found Dixon, I realized that this was how I see the world, and I’ve been completely obsessed with him ever since.” Unable to afford a Mell or Dixon painting on a movie production assistant’s earnings, she says, she bought herself some oil paints, brushes, and canvases, thinking, “Oh well, maybe I can make something similar.”

Growing up in the northwestern Colorado coal-mining, ranching, and elk-hunting town of Craig, Crisp had always liked to draw, though her valedictorian-track emphasis on science, math, and AP English left little time for art classes. Watching the behind-the-scenes documentary in director Peter Jackson’s “Lord of the Rings” trilogy inspired her to pursue cinema. “I came to understand that being a filmmaker means being a scientist, an artist, a writer, a technician, a mechanic — every possible interest.” But the sporadic nature of production work allowed her time to begin self-taught painting efforts. At first, she says with a chagrined laugh, “I kept thinking bigger was better, and I bought some big canvases that really beat me. So I began working backwards in size, trying to return to basics and paint some small, really well-done gems.” 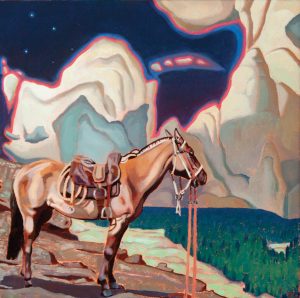 Those efforts gradually paid off, first with Instagram sales and then invitations from galleries, leading to her first online show in 2020. A major success came when advanced interest in her first solo show of eight paintings this past summer at Oh Be Joyful Gallery in Crested Butte, Colorado, was so enthusiastic that the gallery announced its sale would take place through a drawing.

One glance at any of those paintings makes it clear why so many collectors aspired to own one. Arroyo Seco, for example, depicts a brightly sunlit cowboy in gaucho-style garb on horseback against abstracted dark mountain peaks, cottonwood trees, and stormy skies. The horse and his mount are beautifully modeled in broad strokes of color, and the background, inspired by natural history museum dioramas, possesses “a kind of artificiality that feels more real than real.” 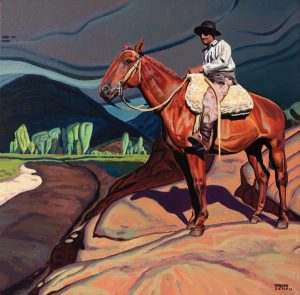 As her own already evident mastery continues to grow, Crisp dreams of someday tackling mural-sized artworks, while also writing screenplays inspired by the West she grew up knowing, “not the whitewashed, John Wayne, hero-saving-the-day but a truer version based on the lives of the people who live there.” The films will no doubt come, but she’s already telling such stories through her growing body of paintings.

Crisp’s work is represented by Oh Be Joyful Gallery in Crested Butte, Colorado, where a new solo show is scheduled from January 6 to 20, with a sales drawing on January 17; at the online Western.gallery; and on the artist’s Instagram page, taylorcrispofthewest.