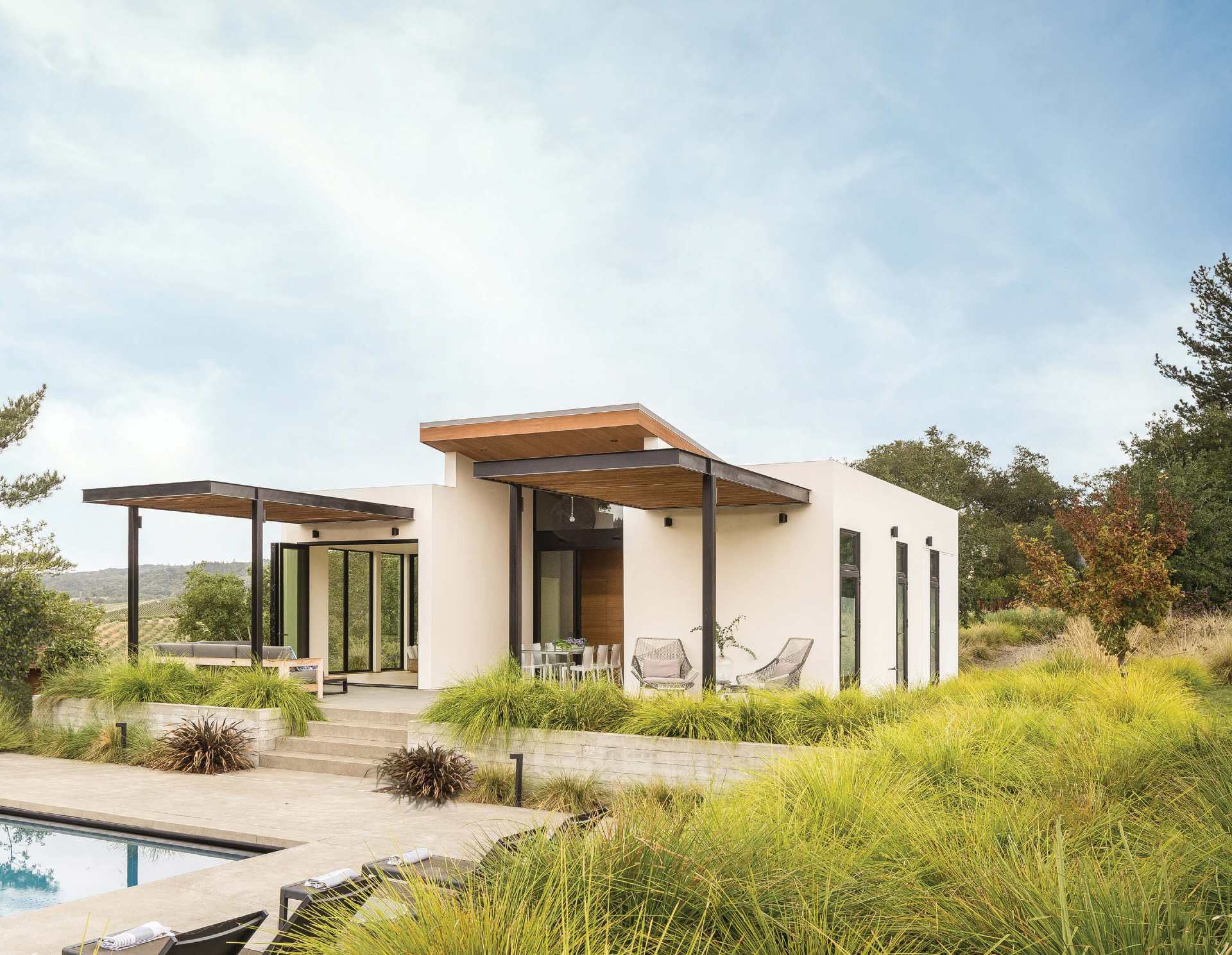 This small building is a distillation of architect Amy Alper’s emphasis on keeping a home adaptable, along with blurring the lines between hospitality-style amenities and residential comfort. The Healdsburg Guest House works as a spa, yoga studio, and pool house, allowing for flexible interior spaces as the owners’ needs change. Warm cedar softens the orthogonal structure, which was built by Robinwood Construction, based in Geyserville, California.

Sonoma, California-based architect Amy A. Alper has an ever-growing list of award-winning residential designs that, while modern, engage seamlessly with their Wine Country surroundings, employing so-called rustic materials in innovative ways. Since the catastrophic fire of 2017, and the yearly fires that have followed, her practice has expanded from focusing on energy efficiency to defensible spaces. 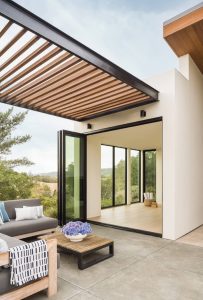 The cedar-sheltered seating area and yoga studio (where a rotating TV drops from the ceiling for remote instruction) focus on the striking views beyond. 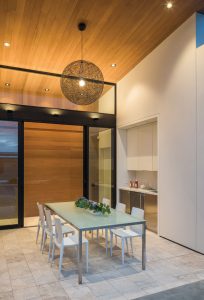 The cedar-clad ceiling flows into a wall that becomes a unifying backdrop for dining.

Ask Alper about her influences and what brought her to architecture in the first place, and she has two answers. First, the emotional response, is that when she was in her late teens, Alper mentioned to her grandmother that she was interested in architecture and was shocked when her grandmother began to weep.

“And I thought, oh my gosh, she wants me to be a doctor or something,” Alper says. “Well, I came to find out that she’d been accepted at Cornell.” But it was around the turn of the 20th century, when female architects were an anomaly, so out of concern, her parents talked her into a more acceptable job — teacher — and she taught math for 50 years. Happily, Alper’s grandmother witnessed her granddaughter’s acceptance into architecture school. 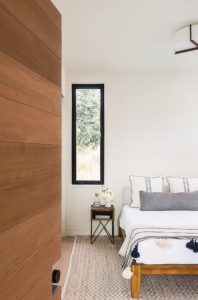 The door to the guest room blends in with the cedar wall. 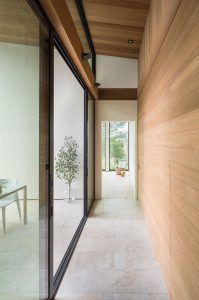 A hallway connects the yoga studio with the spa bathroom. Photos: Adam Potts

The other answer cuts just as close to the heart. “Architecture embodies art and science, as well as an intellectual and emotional component,” she says. She loves the process a project goes through, from the intangible — the sometimes unexpressed desires of the client — to the tangible, finished product. “There are lessons in the work, and certainly, the longer you’re in practice, the ways you have of approaching things start to become evident. But every engagement with clients, and that potential, is always new and exciting.”

Then, on a simpler level, she loves to draw and work with her hands. 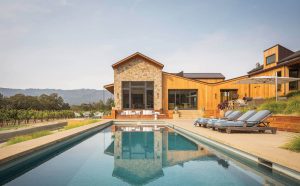 At Glen Ellen Estate, the gable-roof living room is finished in local stone cladding, while the kitchen and primary bedroom wings are cedar. The home was designed by Alper and built by contractor Total Concepts based in Santa Rosa, California.

After undergraduate architecture school at the University of Michigan, Alper was drawn to New York City. “Really the opportunities there,” she says, “between Columbia, Parsons, Pratt, and Cooper Union, I attended lectures on architecture, which was really a significant period of learning for me because the best of the best were lecturing.”

Influential architects showed slides of their work and discussed their approaches to design. “Yet there were always things they talked about in common,” she says. “How one goes from something implicit, an idea, to something explicit, which is the realization of that idea or concept, and the process one goes through to get there.” 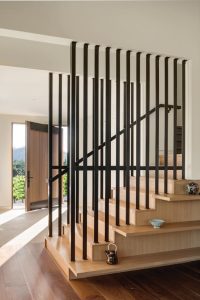 The open, slatted staircase echoes the vineyard’s stakes while creating a transition from the entry into the living spaces. The stairway itself is a gallery for family heirlooms.

Like most architects, Alper traveled, making the pilgrimage to significant buildings. She was especially interested in projects by Le Corbusier and Carlo Scarpa.

Alper chose University of California, Los Angeles (UCLA) for graduate school, arriving at an exciting time — the late ’80s and early ’90s — to a city she regarded as adventurous and experimental in a way the East Coast was not. She became a teacher’s assistant to Richard Meier and joined his firm, where she worked on the landmark Getty Center, all the while living in the Sachs apartment building designed by Rudolph Schindler on a Silver Lake hillside. 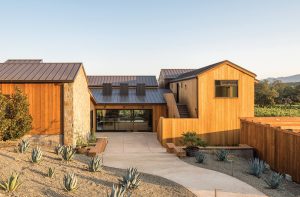 This view of the Glen Ellen Estate illustrates Alper’s skillful use of natural materials and local vernacular within a modern design. When the original house was burned to the ground, the owners, who love to entertain, had an opportunity to start anew.

If ever anyone was immersed in architecture, Alper was.

But there’s no single influence she can point out. It’s more of an aggregate of experiences. “There comes a certain point where you can no longer pinpoint the way you work relative to a particular influence,” she says. “It is ingrained at this point. It’s instinct.” 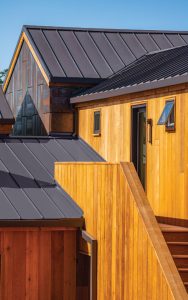 Corten steel panels on the entry tower are tempered with cedar.

After 10 years in Los Angeles, Alper moved north. A turning point was working for RMW Architects & Interiors as a senior project manager on the Carneros Inn, which William Rawn designed. The hotel’s layout was village-like, with individual accommodations connected by pathways to a central meeting area.

“It was largely residential in scale, and certainly there’s a nexus between residential and hospitality in terms of how people want to feel in their homes,” she says. “And so I realized how much I loved the smaller scale. Then I had an opportunity to hone those skills working at Howard Backen’s [of Backen, Gillam & Kroeger Architects] office — one would consider him the elder statesman of the Napa-Sonoma ethos — and I opened my own office in 2005.” 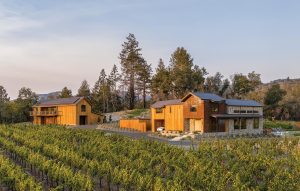 The courtyard is framed by the living area and bedroom wings.

At first, her firm — Amy A. Alper, Architect — had a sole employee, herself. If the phone rang, Alper answered it, and still does. Being a female sole proprietor was a bold move. Though the world of architecture is ever more inclusive, it’s still male-dominated. Today she has a staff of two who work on production, and a number of consultants with whom she works occasionally.

When asked what sets her apart from other firms, Alper’s immediate answer is: “Listening.” It’s not that other architects don’t listen to their clients; it’s Alper’s availability, combined with her ability to seize on what they’re trying to say. Even when a caller wouldn’t be a good fit, Alper will listen until she can make informed recommendations, even a referral.

Especially since the fires, the pandemic, and rising material costs, Alper finds clients have an unrealistic view of how much space their budget will cover, as well as how much space they really need. She steers them toward less volume in favor of richness in detail, high-quality materials and construction, and defensibility from fire. 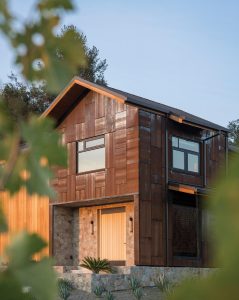 “I explain that they can get everything they want in terms of usability of their homes in slightly less square footage through the use of flexible spaces,” she says. “And that’s really a recurrent theme in the work.”

A guesthouse she designed in Healdsburg, California, functions as a pool house, a shelter for guests, and a spa with a yoga studio. The spaces are flexible while the building illustrates the marriage between hospitality and residence.

The third party in every project, Alper maintains, is the site: “The site is telling us what makes sense.” As she walks the site with clients, she watches their faces to ascertain which views most speak to them. From there, she says, she reads the land. 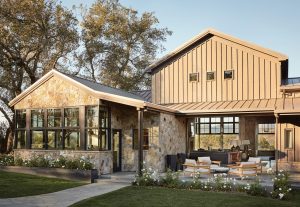 At the Calistoga Estate, the interior blends with the outdoors as the Syar stone-clad kitchen pavilion extends into the living spaces. Jennifer Robin Interiors, of San Anselmo, California, designed the interiors, and Total Concepts built the home.

In conversations, Alper is able to use analogies that specifically appeal to each client — whether art, music, or something more tangible. She uses the easily graspable comparisons to explore ideas the client might be unable to express. “That helps me take them on a journey to realize their project,” she says. “You’re trying to put form to emotional ideas.”

As she designs, Alper works in sections before she conceives the house as a whole. “There’s typically a general plan, an organization, and then an opportunity to understand how the relationships come together,” she explains. “Primarily with the idea of light, either borrowed light or changes to bring in clerestory light. That’s the lesson from Meier’s work — it always comes back to light and how light punctuates and defines spaces.” 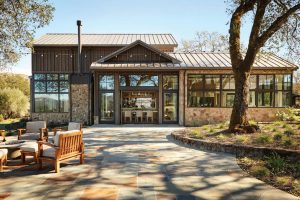 The transition from one space to another is crucial. “You don’t just live in your home,” she says. “You move through it.” So, for instance, public and private spaces are separate yet united in terms of texture, dimension, light, and proportion.

“I worked with an architect once who used to talk about the punctuation of architecture,” Alper says. “That you end a sentence in a period, or you have two connected ideas separated by a comma — well, in architectural terms, what is that comma? That’s a comment that had a lot of impact early in my career, how spaces are crafted and composed and serve to illustrate what’s going on in the mass.” 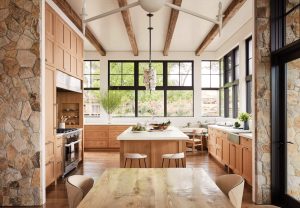 The stone wall leading into the kitchen pavilion gives the space the appearance of having been added onto overtime, a practice typical of rural houses.

That theory and the arrival sequence are kinetic aspects of architecture that excite Alper. In the rural setting of Wine Country, where the views are endless, most clients are quite interested in how they’ll greet guests. Often in Alper’s designs, a long driveway or road will rise slowly to a first dramatic view of the house, landscaping, and views. Once guests have parked their cars, they’re on a near-ceremonial journey to the front door.

In the future, Alper envisions working outside of Wine Country, and she’s in talks about projects in other states. Many of her clients already come from other parts of the country, and with today’s ease in communication, it’s not the stretch it once was. 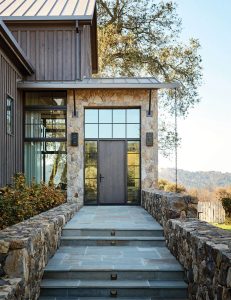 Guests reach the dramatic entry via a bluestone walkway and steps that provide views of the vineyards. The sheer scale of the glass-framed doorway prepares them for the transition to the living spaces. Photos: John Merkl

Whatever happens, she’ll continue designing with what she calls the building blocks of architecture: space, light, texture, rhythm, proportion, and clarity of detail.

And as a woman with her own firm, which is still, unfortunately, not that common, Alper sees the advantages. “Whereas my grandmother couldn’t become an architect because of her gender,” she says, “many of my clients come to me because of my gender. They feel I’ll be a better listener.” 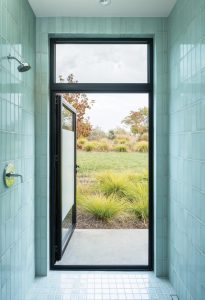 The multi-purpose shower at the Healdsburg Guest House is a casual pool shower when the doors are open, but with the doors closed, the watery blue-tiled space becomes an elegantly calming spa. Photo: Adam Potts

Writer and editor Laurel Delp is a frequent contributor to WA&A and other magazines and websites, including Town & Country, Departures, Sunset, and A Rare World.