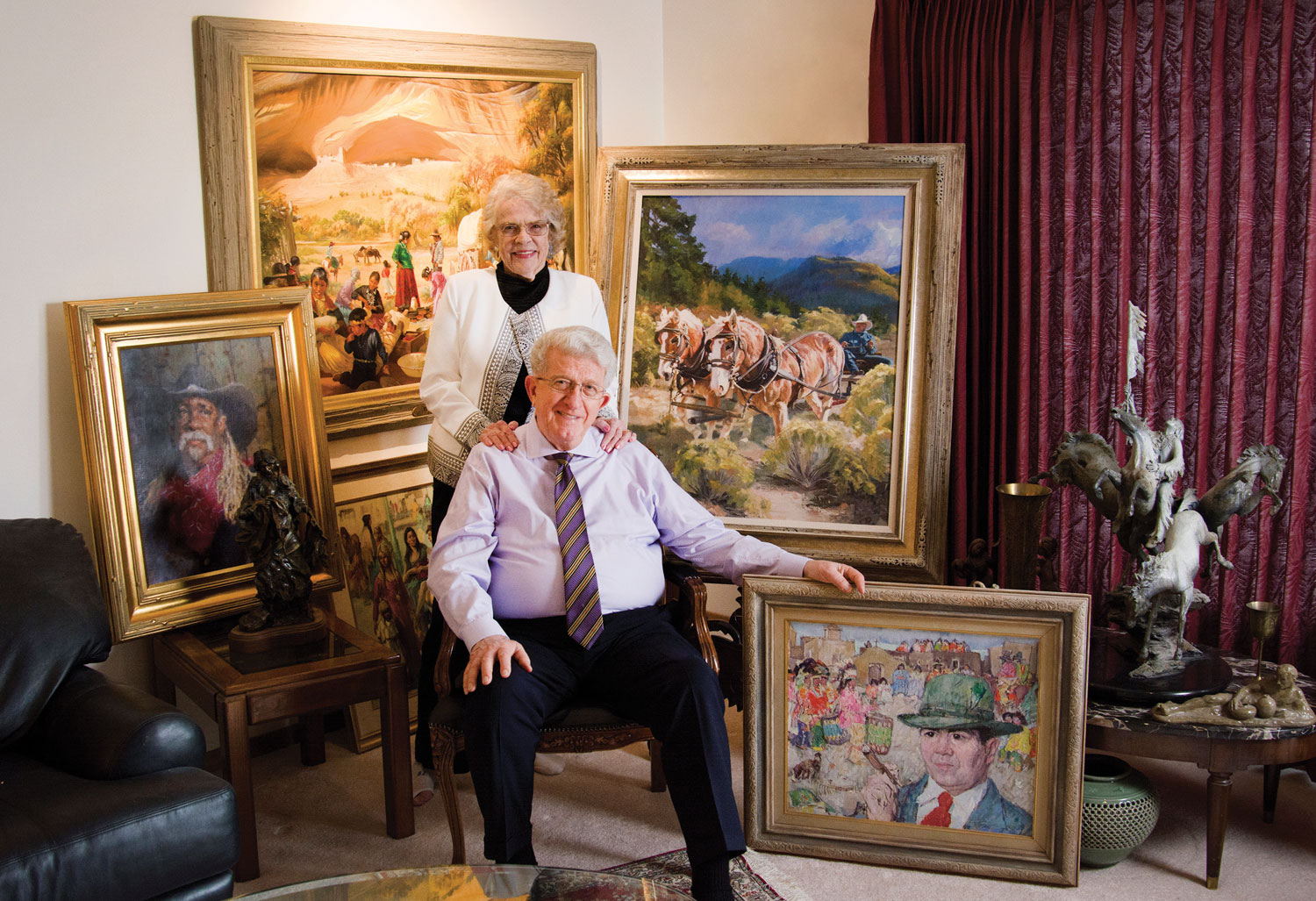 Dr. James Harken, a retired dentist in Spokane Valley, Washington, never dreamed of becoming an art collector. He spent his formative years in Cartersville, Montana, where his family lived without running water, indoor plumbing, or electricity. “My father became an attorney after putting himself through college and law school for 17 years, starting in the Great Depression,” says Harken.

Determined that his son become a physician, Harken’s father sent him to the University of Montana and later to medical school at the University of Washington where he met his late first wife Joanne. The couple might never have met had Harken not changed his career goal from medicine to dentistry. “My dad almost disinherited me,” he says.

In 1967, Joanne was in dental hygiene school, he recalls. “She took an art appreciation course and bought a watercolor from her instructor for $250,” he says. “We went to Hawaii for a dental meeting after that and started looking in galleries. We bought four oil paintings at the time and 22 etchings by Kaiko Moti.”

Since then, Harken has amassed some 3,000 artworks in a wide variety of media and genres. With prominent Western and Southwestern components, the collection includes sculptures, paintings, prints, drawings, and art objects in many styles, from many eras. “I have a Remington and an O.C. Seltzer, but no Russell,” he says. “And I have quite a number of pieces from the Taos School.” Well-known artists in the collection range from Thomas Hill, C. Michael Dudash, Leon Gaspard, and E. Irving Couse, to Margaret Keane, Eva Makk, Salvador Dalí, Pablo Picasso, and Peter Max.

Harken’s stature as an art collector parallels his rise through the ranks of dental associations at local, state, and national levels. He became a delegate to the Washington State Dental Association and later ended up as president of two state dental organizations at the same time. “It taught me how to work with people,” he says. It also required traveling to cities around the country, which broadened his contact with major art centers. The combination of dental politics and creativity made Harken a formidable arts advocate.

In 2004, several agrarian townships directly east of and adjoining Spokane incorporated as the City of Spokane Valley, where Harken resides. Encompassing some 40 square miles and a population pushing 100,000, today’s Spokane Valley typifies suburban sprawl: generic residential neighborhoods and miles of lackluster commercial strips that sprouted everywhere after World War II. Spokane Valley is aligned along railway and arterial corridors that run parallel to Interstate 90, with no obvious historic city center. When a city hall was built in 2016, civic leaders positioned it on available land, more or less in the middle of the east and west boundaries of the main arterial, but civic identity remained elusive.

Shortly after the city’s incorporation, Harken and a group of arts advocates formed the Spokane Valley Arts Council to promote art appreciation, improve the livelihood of local working artists, and help create an identity for Spokane Valley through the careful selection and placement of public art. Harken’s election as president of the Arts Council in 2006 marked a significant turnaround in city affairs: The Arts Council held its first annual art auction and made money. “Each year, it’s gotten better and better,” says Harken. “The money goes to bronzes, not parties.”

Today, five bronze sculptures honor the spirit of the Great Northwest, its lands, and peoples. Works by artists Jerry McKellar, Nancy McLaughlin, and Ace Powell have been enlarged to monumental scale from smaller castings in the Harken collection. Paid for by the Arts Council, three sculptures surround the city hall and two are installed on the grounds of the city-owned event facility, CenterPlace. Artworks from the Harken collection and local art groups rotate in and out of the “museum without walls” located inside CenterPlace. Two more bronzes await placement, with plans for more at the rate of one per year.

WA&A: How did you begin collecting?

James Harken: I went to many dental conventions, which take place in big cities where major art galleries are located. We visited galleries in Miami, New York, Chicago, Los Angeles, Honolulu, and Phoenix. I became involved with art collectors across the country. Sometimes, we swapped pieces.

WA&A: Did you start out with specific goals, or did they develop over time?

J.H.: I didn’t have any original goals for collecting. I just loved art. My collection is eclectic.

WA&A: Do you have a strategy when it comes to buying at auctions?

J.H.: Yes. If I’m really smitten with something that I see, and I’m in the audience, I’ll follow it to the point where I’m comfortable. If I have to leave an absentee bid, I’ll bid up to 90 percent of the high estimate.

J.H.: In 1978, my wife Joanne and I owned a gallery in downtown Spokane. One Saturday, a lady brought in a small watercolor signed “C.M. Russell.” She asked $8,500, but I couldn’t find anything on it. In early spring, I sent it to some art friends in Santa Fe, but they couldn’t make up their minds. I got it back in time for the Russell show in Great Falls, Montana. Steve Rose from the Biltmore Gallery and Ray Steele of the Russell Museum came in and decided in a few minutes. That picture changed hands three times at the same Russell show. I saw it in Santa Fe later for $47,500. I’m guessing it would easily be $125,000 now. I got a world of education from that piece.

WA&A: Where do you see your collection 100 years from now?

J.H.: A museum, but that’s unlikely. Paulie, my present wife, and I have been gifting our children with art for years. They really don’t know what to do with it all and don’t have a place for it. I recently told them to go through the collections and decide what they would most like from it. I gave them little notepads and told them to list their favorite pieces that they would like to be gifted. So the kids will come first, but the rest will go into a community trust to benefit the citizens of Spokane Valley.