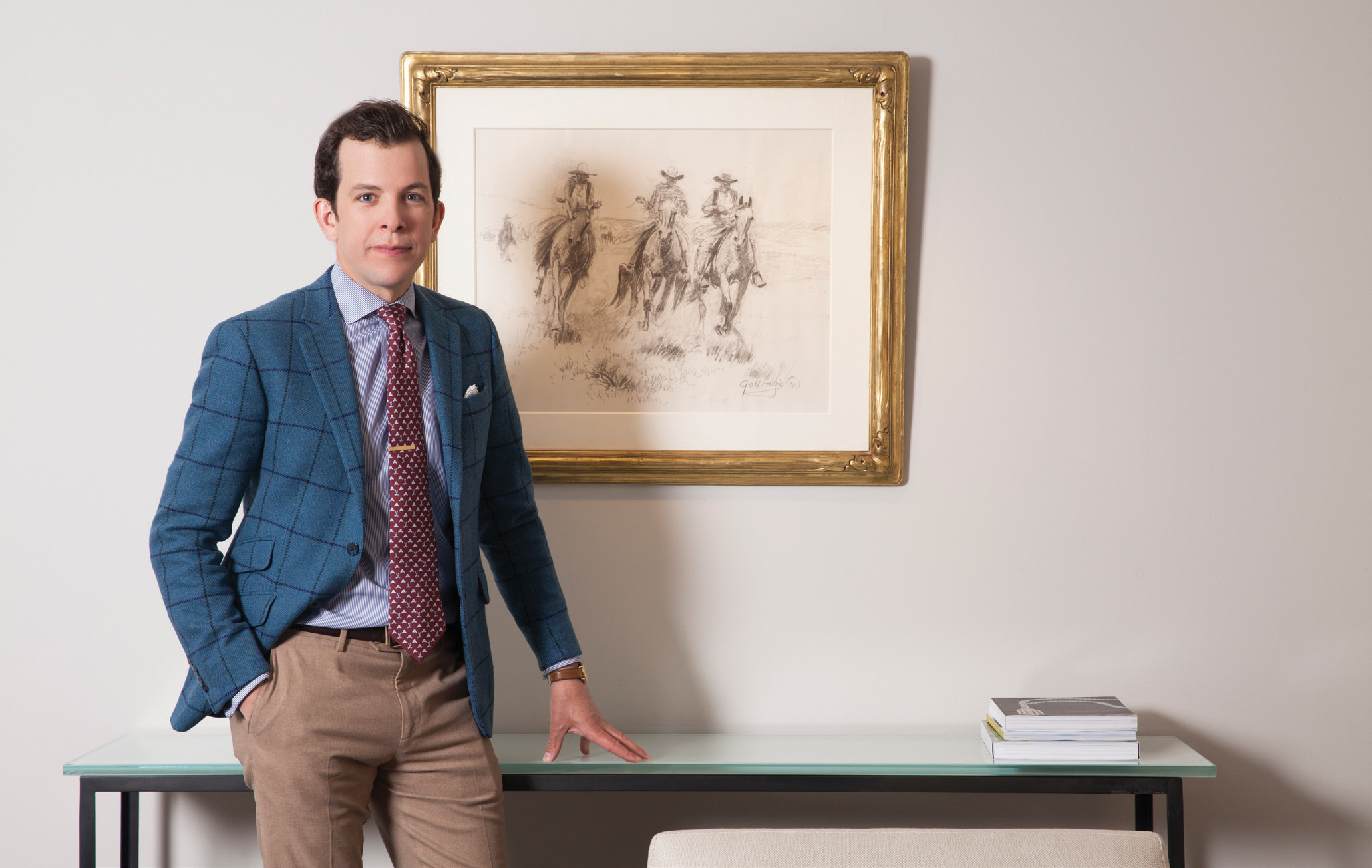 11 Mar Collector’s Eye: Meant to Be

Fortune destined Tylee Abbott, vice president and specialist in Christie’s American Art Department, to be attuned to the art of the U.S. West. Abbott’s namesake ancestor, William Tylee Ranney, was a famed 19th-century artist known to paint everything from sporting to landscape art, including the nation’s far western frontiers and rugged mountain ranges.

If Abbott, whose Christie’s contributions include assisting clients with appraisals and collecting in addition to augmenting the international auction house’s sales of American art, had not already inherited an affinity for Western art, his appreciation of it would have been — and ultimately was — perfected by his family’s association with the late Peter Hassrick, noted curator, scholar, and author on the genre. As a youth, Abbott figuratively learned at the feet of one of the greats, and none of those lessons have been lost on him as an adult.

Strengthening the ties that bound Abbott to the West was summering in the Northern Rockies and the relocation of his family from Philadelphia to a cattle ranch in Montana while he was still a child. The transition from visitor to resident heightened the art expert’s love of the area and cemented his belief that Western artists create the visual documents that capture and embody the region’s culture and history.

Abbott’s experiences and associations with the West have made it more real and more meaningful than any imagined myth. “I’ve long held that to have a real understanding of the West, you need to spend time in that landscape, with those people, to come to know the spirit of it and the mentality of it,” he says. “And I encourage anyone who is not doing that to venture west.”

Abbott has concentrated on acquiring works on paper — sometimes studies for larger pieces that are executed in everything from watercolor to pen and ink — by storied Western artists including Frederic Remington, Thomas Moran, Henry Farny, and E. William Gollings.

WA&A: What inspires you to collect art?
Tylee Abbott: It has come to a point in which it’s kind of innate; it’s in me. As a child, I had this enduring fascination, verging on obsession, with the West and the need to have a visual representation of that culture around me.

Works on paper — when you discover they were studies for other works — are representative of the moment in which an idea was implanted in the artist; they can be very expressive of an artist’s genius. For example, envision Thomas Moran out in the woods sketching; he transmits that primal root of his genius from his head to his arm to his hand and onto the paper.

WA&A: What was the first work that you purchased, and what made you choose it?
T.A.: My early experiences were important lessons in collecting, and I’m hopeful they can be helpful to others. I made a lot of mistakes. When you first come onto the scene, you are enthusiastic and want to participate, but perhaps you don’t know as much as needed about the process of acquiring. The first things I bought were, in effect, doodles by artists like Edward Borein and Ace Powell, mostly because I wanted to engage in the collecting community. I dipped my toes in and, in the process, overpaid for things, some of which I’ve since sold to buy more significant works. Personally, I’m an experiential learner. Some people could read 50 books on Remington and track the market for years before buying a single work. For me, it was meaningful to get into the market and make mistakes in order to learn from them.

WA&A: Was there ever one that got away?
T.A.: I follow every single Western art auction and trading on the private market. In a manner of speaking, all of those got away because of my lack of means. As I become more discerning as a collector, such occurrences increase. The more knowledgeable you are, the more likely you are to be surrounded by a different echelon of buyers who are as committed as you are or more committed than you are. And you lose if you have my budget.

WA&A: When did you realize you were a collector?
T.A.: When you’re first acquiring things, I think you’re more of an accumulator than a collector. It’s been in the last decade that I feel I’ve come into collecting. Early on, I was buying a little at will, names I knew and images that I liked. When you graduate from that to attempting to understand the merits of an artist and his or her career, when you are constantly striving to be a connoisseur and to more narrowly define the best of an artist, you have attained the inclinations of a collector.

WA&A: If you could meet any artist in history, who would it be?
T.A.: I would like to meet and get to know my ancestor, William Tylee Ranney. Beyond the fact that he’s a relation, what’s quite interesting about him, and what’s been reported and understood in scholarship about him, is that he was an upstanding individual who was well-liked among his cohorts. When he died at an early age from tuberculosis, the National Academy of Design, the leading art institution in America, held an estate sale to raise funds for his widow and children. There was an outpouring of support from fellow academy members, important artists of the day, like George Inness and Jasper Francis Cropsey, who contributed their own paintings to be sold on behalf of the Ranney family.

WA&A: Where will your collection be in 100 years?
T.A.: In a museum would be all well and good, but it’s not something I necessarily see for my collection. Truthfully, I see myself buying and collecting objects as a custodian. These are historical documents that belong to everyone. I’m merely holding onto them for a little while, after which they may be distributed to the four winds, to others who I certainly hope will enjoy them as much as I have.