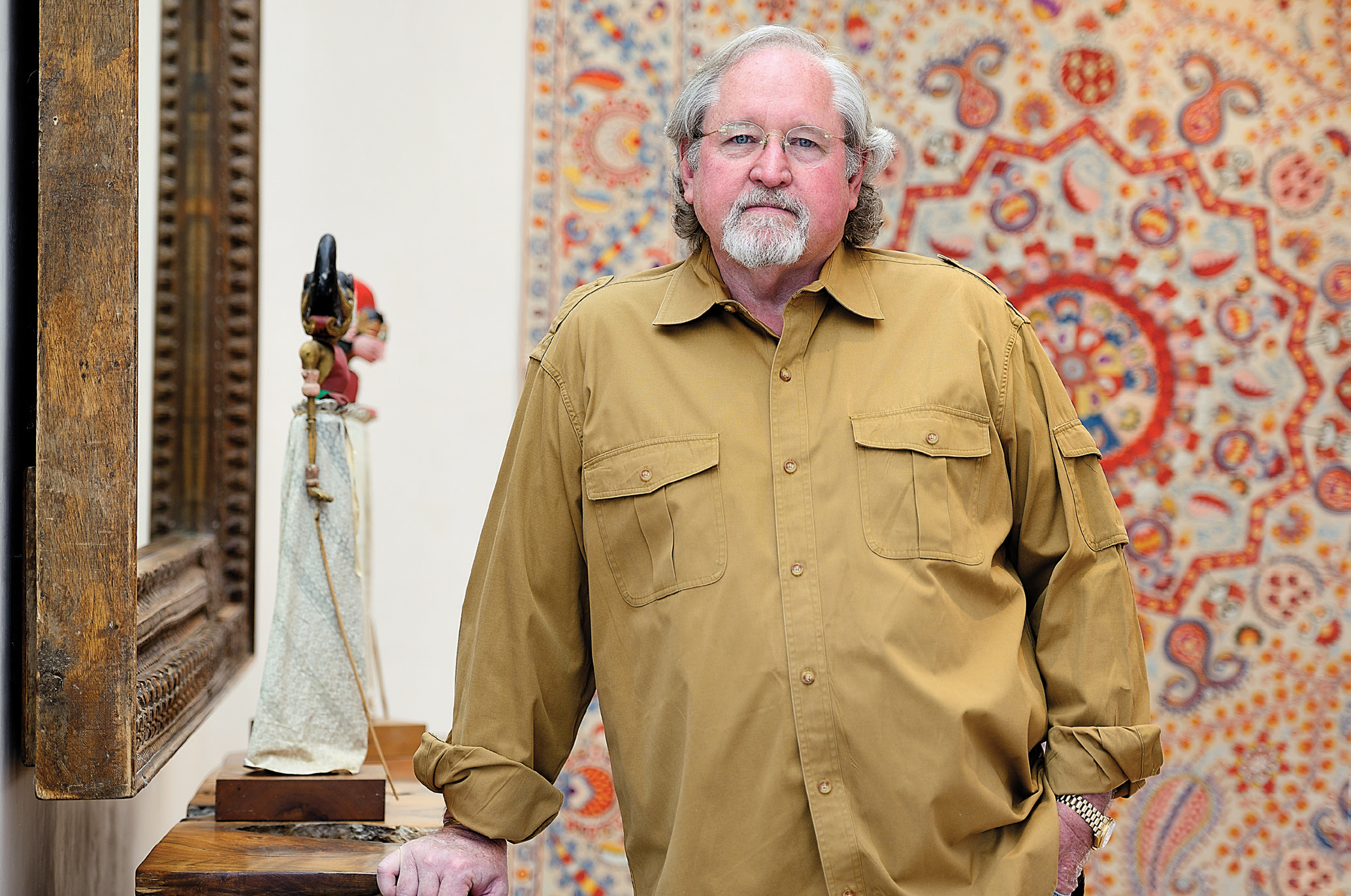 14 Nov Collector’s Eye: To Have and To Hold

Rusty Henderson is a man on a mission for art, a man whose passion for paintings is secondary only to his love for his children and grandchildren. Like the knights questing for the Holy Grail, like Ponce de León seeking the fabled Fountain of Youth, like Siegfried’s persistent pursuit of his beloved Kriemhild, Henderson won’t quit until he has attained the object of his desire.
The inclination to acquire art began when the native Texan was just a teen; today, the entrepreneur is as determined as he was decades ago to have and to hold those artworks that lend grace to his home and meaning to his life.

WA&A: What inspires you to collect art?
Rusty Henderson: Paintings, when they’re done well, impart a feeling of a place or people, of a time in history, or of experiences you have had during the journey we call life. I collect art that draws me to it and in it — it’s as though I am magnetically attracted to the paintings that I either have purchased or tried to purchase. These have meaning to me — there are stories there that, from time to time, I can revisit, and there are memories there that are important to keep alive. And the stories that emerge from my paintings are all different.

For example, I have several of Jim Norton’s paintings, one of which I bought a very long time ago. It was one of his early works — he was very young and just getting started — and it shows two riders going up a hill on horses. I saw it in Trailside Galleries, and I bought it. At one time, I worked with a gentleman on a ranch in the Texas Hill Country, and the painting takes me back to those times.

For any given painting I buy, it’s whatever is within it that makes me want to add it to my collection — and it will stay there forever. Parting with any paintings I’ve purchased would be, and has been, a hardship. There was a time when I had to sell three paintings, but not a day has gone by that I haven’t looked to buy them back. Each painting has a profound impact on me, and being forced to let any go leaves a void that no other artwork can fill.

WA&A: What was the first work that you purchased, and what made you choose it?
R.H.: It was a horrible piece of art as far as paintings go. I was 14 at the time and attending the Kerrville Festival of the Arts in Texas. As I recall, the painting was either $150 or $200, and I loved it. I bought it, and I still own it, and I still love it.

WA&A: Was there ever one that got away?
R.H.: Yes, and no. There are 10 rules to buying art, and nine of those are that you’ve got to like it. The 10th is that you must be able to afford it. At some point in time, you have to respect your financial limitations. I am not a wealthy person; I’m just passionate about art. Sometimes you have to say, ‘This isn’t going to work; you just have to let this go.’ A case in point was a John Clymer painting I wanted to buy. It showed mountain men leading a trail of horses across the snow, but I couldn’t meet the 10th rule when I first saw it, which was about 30 years ago. I thought, ‘Maybe if I live to be 243 years old, I’ll find it again and buy it.’ It showed up at an auction many years later, and I went to the sale, and I bought it. I was as enchanted by it then as I had been so many decades before.

WA&A: Were there artworks that didn’t get away due to your perseverance?
R.H.: At an auction, the bidding for a G. Harvey painting was apparently between me and someone on the telephone. In a moment of clarity, I finally just looked over there and told them to hang the dang phone up. To me, I just solved the problem: if they would just hang up, then it’s just me. Ultimately, I got it. It’s one of Harvey’s Western art pieces depicting a rainy day in which horses are tied up in front of a house with lights glowing. It met the first nine rules of collecting, and it also represented a certain timeframe in which I thought the artist was doing his very best work. I had looked for a G. Harvey for a long time, and I wanted one created between 1985 and 1995; the piece I bought was painted in 1989.

Another time, I took my middle and youngest daughters to an auction in Waco, Texas. My middle child was sitting next to me and writing things in the catalog when a set of spurs came up that I had an interest in. She showed me the catalog where I had checked them off, and I gave her the paddle and told her she could bid on them for me. I’d nudge her, and she’d put the paddle up, and finally, it was between us and a guy sitting in the row in front of us. He would bid, the auction people would look back at my daughter, and I’d nudge her. She was proud as peaches.

The spurs were getting to what they were worth. She bid one more time, then the guy bid, and then the auctioneer comes back with, ‘Will the cute girl bid again?’ The guy leans back around and tells me to take that kid and get her under control.

I can assure you I would have bought that whole auditorium before that guy was going to leave with those spurs. I told my daughter, ‘Go ahead, baby, just hold the number up.’ It ran up to three or four times what it was worth, and he finally gave up. I told him, ‘If you think I’m going to let you talk to my child or to me like that, you’ve got to be kidding.’

WA&A: What artwork are you most passionate about?
R.H.: What I am absolutely most passionate about in my life are my children and grandchildren. Those are my daughters Misty, Katie, and Caroline, my granddaughter Ashley, and my grandson Payton. I cherish them with my life.