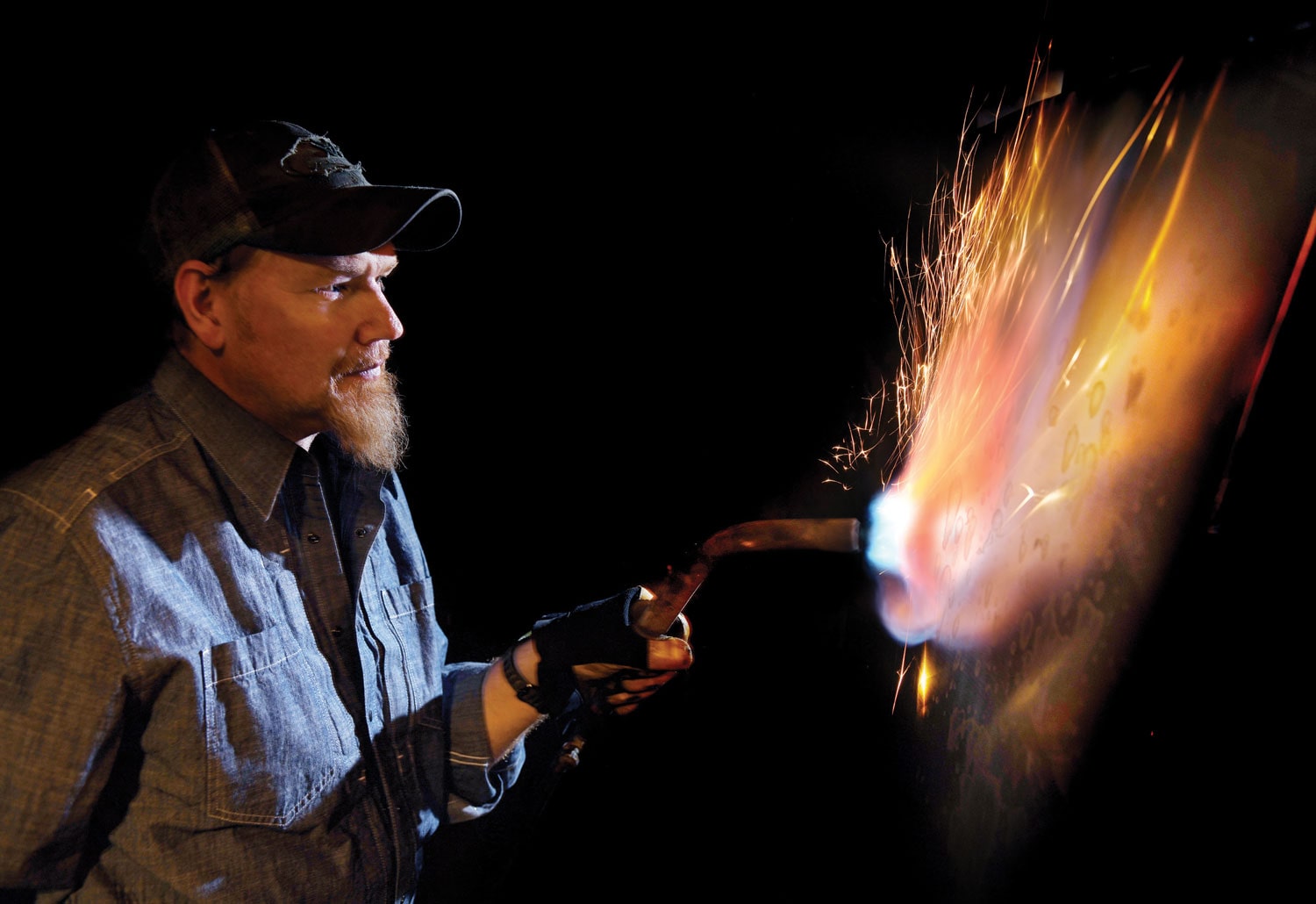 Nathan Bennett is an alchemist. A visit to his studio reveals creative signs you’d expect to see in a medieval workshop. Every surface is strewn with half-filled vials containing a bewildering array of chemicals and unknown elements. The remnants of past mixtures stain the floors and walls, and seemingly chaotic art experiments are caught in various stages of genesis. 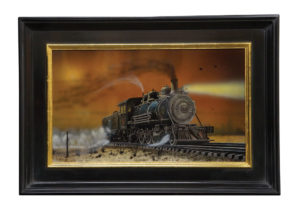 As a “patina painter,” Bennett’s process is an unusual and rare art form. In an alcove at the back of his shop in Mapleton, Utah, he heats a thin sheet of bronze with a propane torch. The roar of the fire focuses the attention in the room on the mesmerizing blue flame passing across the metal surface.

Bennett intently observes the bronze, intuitively sensing temperature and condition. Anticipation and heat build until the moment when the metal itself appears anxious to begin its transformation. The flame is extinguished with a sudden pop, and he applies a clear liquid to the seared surface. Instantly, the shiny bronze turns black. Steam hisses as the molecules in the solution react. The smooth bronze now resembles velvet.

Bennett expertly caresses the metal again with his torch. Patches begin to flicker in the heat, and suddenly, portions of the dark surface transform into silver, bright as a dime. The bronze seems alive, the color and tone undulating in the heat.

In turn, Bennett introduces several other chemicals, and slowly, an image of a landscape begins to emerge on the bronze plate. Each chemical reaction builds or fades to reveal its unique nature when heated. It’s like watching for patterns in the embers of a campfire, but somehow, each transformation occurs completely within Bennett’s control. It’s like watching a magic trick. 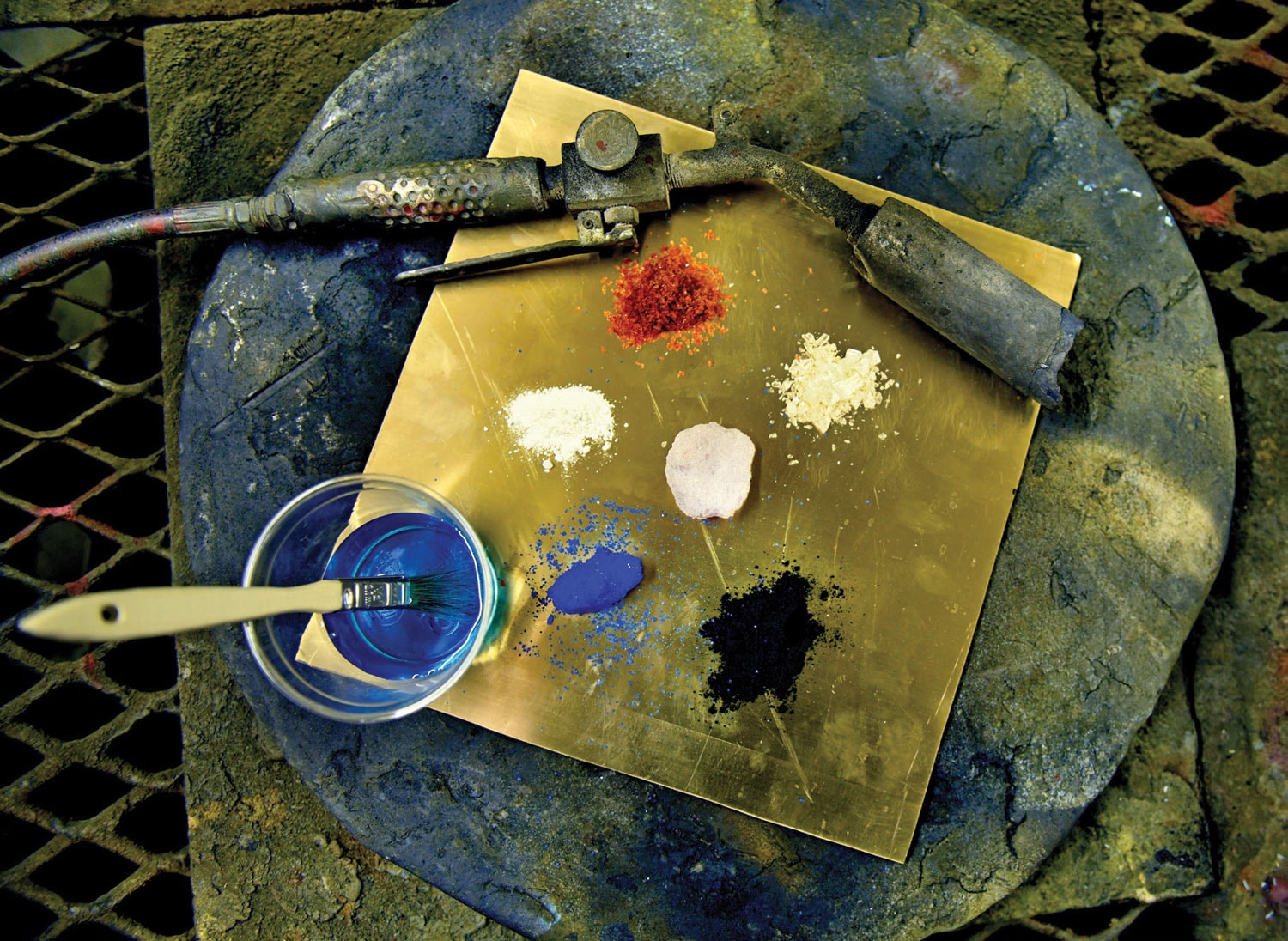 A sample of the chemical elements that Bennett uses; each one creates a different effect when layered and agitated with heat.

It takes time for viewers to understand Bennett’s artwork in a gallery setting, the artist explains. The luminosity and brightness of the colors make one think they’re looking at a painting; it’s hard to imagine the work is a product of a chemical reaction.

Bennett applies iron, silver nitrate, copper, cobalt nitrate, titanium oxide, and other chemical compounds in specific formulations to achieve color. For example, exposure to copper nitrate leads to a green or blue, while sulfur compounds tend to turn the metal black, and ferric nitrate turns the metal brown. Each chemical is mixed into a recipe and applied in layers; chemical reactions build upon each other, some encouraged and some quelled. Fire is used to fuse the chemicals onto the bronze surface, creating depth and texture. 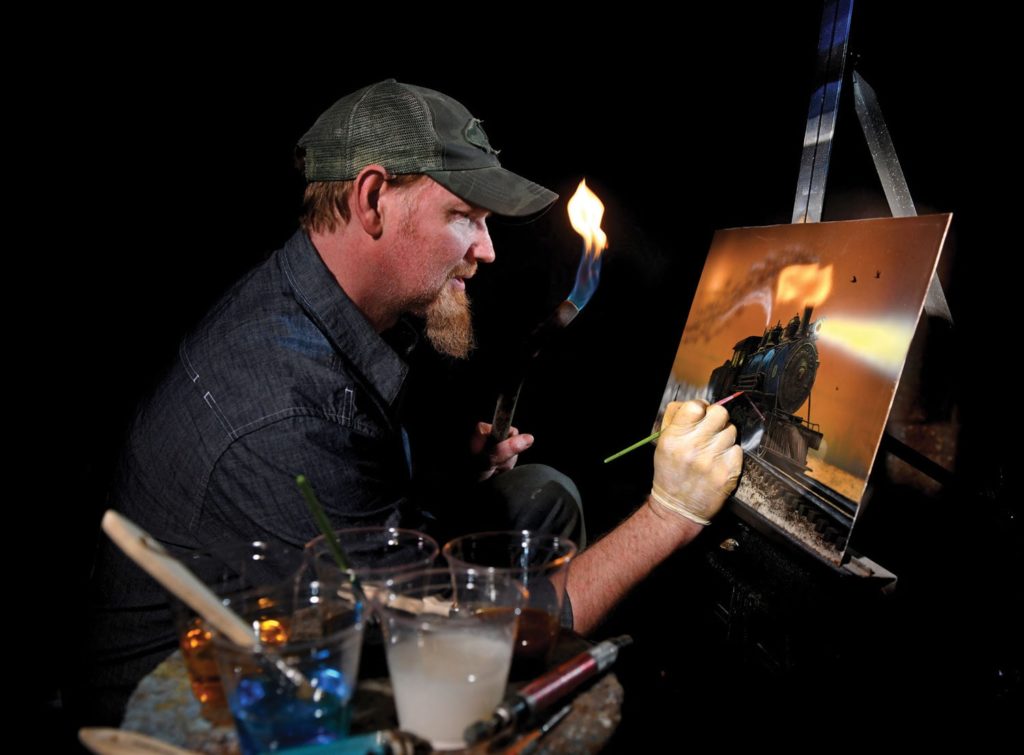 Bennett carefully applies one of his mixtures to High Desert Runner, a patina painting in progress.

Patination is an ancient art, and many of its secrets — including chemical combinations, temperatures, and techniques — continue to be guarded by practitioners, explains Bennett.

“Part of the magic of the alchemy I do is intuitive and not easily explained. Each new work is an experiment rather than a repetition,” Bennett says. “Yes, I am an avid student of the patina art and have learned or discovered many new ways to express the media and myself. If you could read them, I have many notes, but they are what I once did, and not always what I am doing now.”

Bennett has learned by trial and error over the course of his lifetime. His journey began as a teenager when he worked at the Wasatch Bronze foundry in Lehi, Utah, learning the process of casting bronze from beginning to end, and working in whatever capacity the foundry could use him. In a short time, he found himself drawn to the patina room.

The foundry’s owner, Neil Hadlock, saw that Bennett was serious. The young artist was given the keys to the foundry, and, in secret, Bennett would regularly stay there all night, experimenting. He developed a broad understanding of the materials used in classical patina finishes, honing his skills professionally by working on traditional bronze figures for sculptors. From there, he began to experiment, applying the methods he learned as an advanced patineur in the foundry to his two-dimensional designs, creating paintings with chemicals and fire. 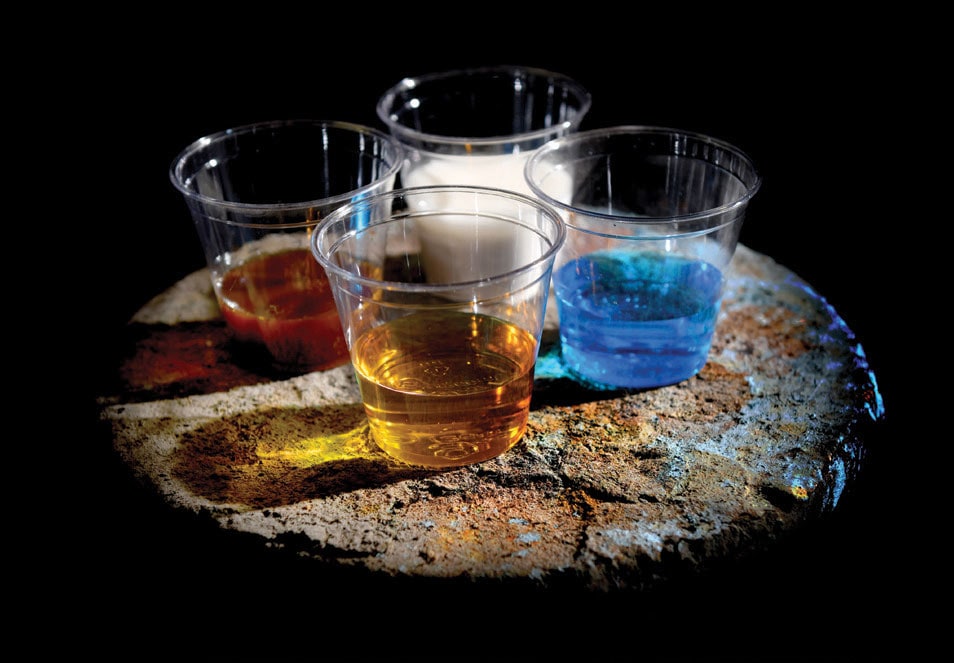 Alchemy was once believed to be the art of transforming one element into another. An alchemist was revered for his ability to purify materials into their perfected form, taking the base elements of matter and developing them into the highest order of their creation. Bennett practices his art like alchemy. And in a world where it seems that everything has already been discovered, he created a new form of expression from earth elements, bonded with fire — transmuting raw materials into beauty.