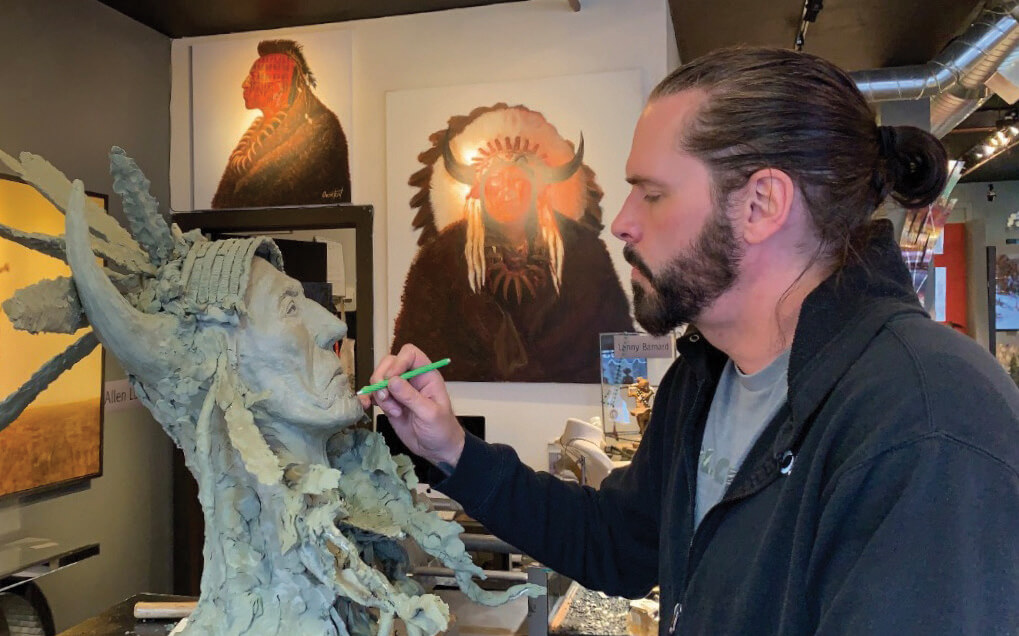 In the early 80’s, when Greg Overton was a fourth-grader in Salt Lake City, Utah, a professional artist came to speak to his class. “We had a painting contest,” he recalls, “and I made a little watercolor portrait of Dull Knife, the Cheyenne chief.” It was an expression of his early obsession with American Indians, and the visitor chose Overton’s work as the winner. “I was always a good little artist,” he adds with a laugh. Those passions for art, the West, and its Native peoples were fostered by his grandma, Jean Holladay, herself a professional painter, and “Grandpa Bob,” whom Overton describes as “a gold miner, adventurer, and entrepreneur.”

During his teens, a love for punk rock took over. He played bass and sang with hardcore bands in the Salt Lake music scene well into his 20s, while also putting his visual talents to work by creating album art for local groups, including Maimed for Life, The Stench, and Victims Willing. For a while, his earlier childhood interest in art faded into the background. It was “rekindled,” though, first in 1990 when his mother insisted he join her to see Kevin Costner’s Dances with Wolves; and then again in 1992, when he happened upon The Art of Howard Terpning, a coffee table book on one of America’s preeminent painters of Native American subjects.

Meanwhile, Overton further honed his self-taught visual skills when, in his late 20s and early 30s, he earned a reputation as “the haunted house king of Utah,” designing walk-through Halloween attractions not just for the local audience but also, in 2002, a 9,000-square-foot extravaganza in Hong Kong, featuring UV lighting and requiring viewers to wear 3-D glasses.

In his spare time, he began painting historical images of Native Americans, emulating the highly detailed, romantically atmospheric look of Terpning. Without an appointment, he showed some to a gallery owner in Park City, Utah, who agreed to represent him. The first three paintings he delivered sold in one day during the town’s annual arts festival in August 2003. “I took all that money and bought myself better equipment and started hiring models,” Overton says.

Three years later, further clarity came when he met and befriended novelist Michael Blake, author of the book on which the film Dances with Wolves was based. Overton recalls telling him that he wanted to be the next Terpning. “[Blake] told me, ‘Don’t be the next anybody. Be the first you and do what you like.’”

That sage advice led Overton to the style and subject matter for which he’s known today: large-scale, boldly realistic oil portraits of men and women from the Lakota and other Plains tribes, wearing intricately rendered ceremonial garb and face paint, set against neutral but richly painted backgrounds imbued with arresting immediacy.

“I would call my style ‘Western contemporary,’” Overton says. “I’m trying to bridge that gap between the generation that grew up watching John Wayne movies and the generation that saw The Revenant with Leonardo DiCaprio. I want to show the younger generation what’s cool about Western art, and do for it what punk rock did for music.”