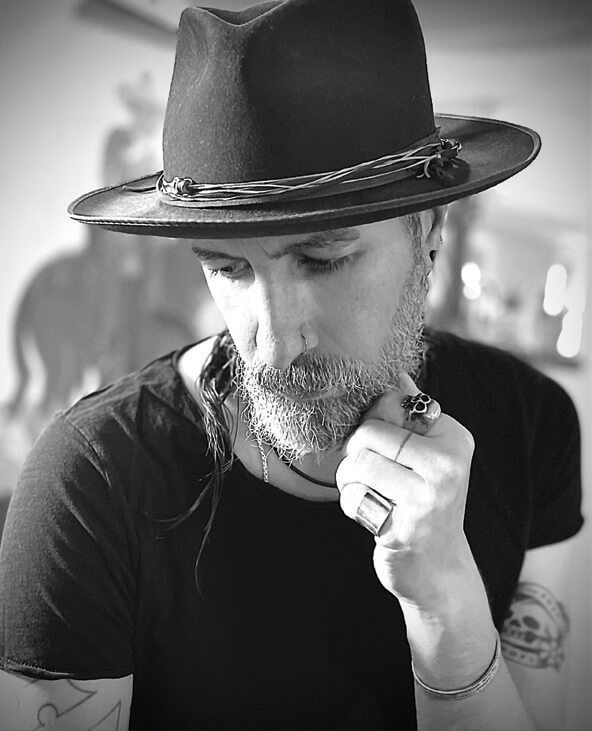 Sean Michael Chavez can trace his roots in the Southwest back 300 years, all of it transpiring within Northern New Mexico, the region he’s always called home. Yet, it took him several years of painting to realize that this history would become the subject for his art and help launch a successful career. 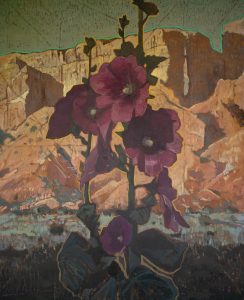 “I have to be authentic about what I’m painting,” says Chavez. “And I wanted something unique that relates back to me and my life. That’s how I ended up painting the history of the Mexican vaquero, and once I started, I could not believe I had never known about them before. It is a rich, beautiful history, and so much of this segment of history has been erased while other parts of it still have not been fleshed out at all. I was surprised how often people did not know the history and origins of the cowboy.”

The Spanish arrived in Mexico in 1519, and soon after, they began importing cattle and horses. The ranch owners taught the Indigenous people of Mexico how to work the animals, and by the 1700s, cattle ranching had spread throughout the American Southwest and down to Argentina. According to the History Channel, “while classic Westerns have cemented the image of cowboys as white Americans, the first vaqueros were Indigenous-Mexican men.” 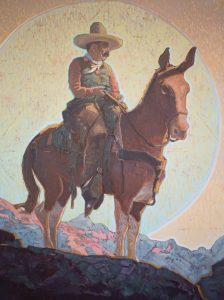 Chavez has been a creative force for most of his professional career. However, he dedicated the first two decades of his artistic output to graphic design. He credits much of his success as a painter to those early years. “When I was in my teens and early 20s, I wanted to be a famous artist,” says Chavez. “But I decided to go to graphic art school, and while I was not painting, I was being creative, making creative and artistic decisions, and learning important ideas about form, color, shape, and the arrangements of objects on a two-dimensional surface. I did graphic design for two decades, but I always knew painting would resurface.”

Chavez refers to his new works as icons, but the term has multiple meanings. First, it pays homage to the artists of the American West who have come before him; and second, it refers to the iconic nature of the figures within the vaquero subject matter. 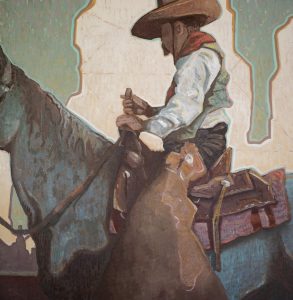 “I think when building a potentially successful show, the paintings progress, and the idea behind the show progresses as well,” says Chavez. “It is a learning process, and along the way, unexpected things happen, and you head down trails you have not seen before. I always start with concepts, but halfway through the process, that list disintegrates, and a new list and new inspiration emerges. And that is exactly what happened with this idea of icons.”

Working with Chavez was a perfect fit for Carlos Acosta of the Santa Fe-based gallery Acosta Strong Fine Art, which will host a show of Chavez’s work August 8 through 22.  “I’m proud to present rising star Sean Michael Chavez; his first two shows with us completely sold out,” says Acosta. “I am excited to see what this new show brings. Sean paints our culture, heritage, and scenic beauty — [he] basically paints what he knows, feels, and lives. He is bringing to new light our Mexican vaqueros, the original Western cowboys, who tend to be underrepresented in the art market.” —Joshua Rose