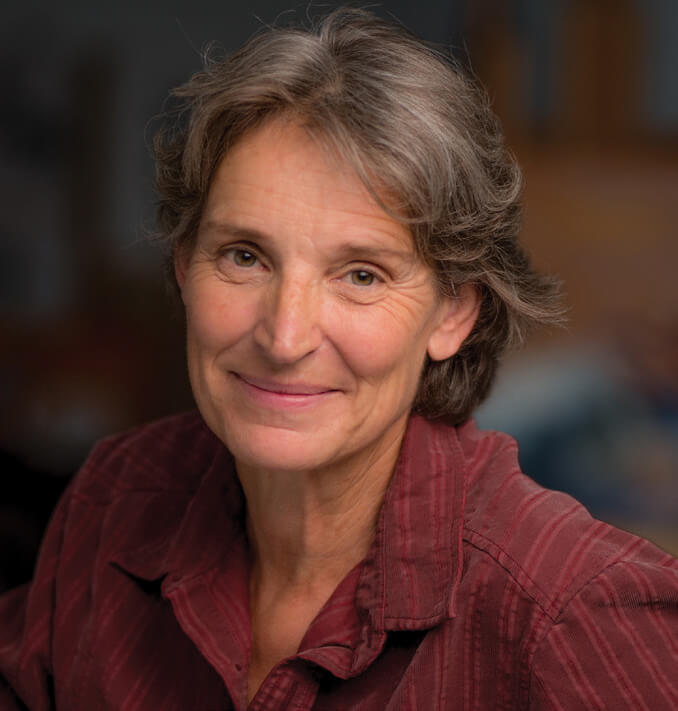 Many of Sophy Brown’s recent works offer a deeply personal spin on the concept of the vanishing West. In Dueto Americano, for example, she realistically renders a Mexican-American cowboy on horseback in acrylics on a large-scale surface. Yet, all around the duo, abstract swirls, splashes, drips, and daubs in whites, grays, salmon pinks, and midnight blues simultaneously highlight and obscure the figurative elements in a process the artist refers to as “obliteration.” The result becomes a visual dance between realism and abstraction. “I feel like the physicality, the energy of the horse and rider as they go forward, leave behind some sort of drama in the air,” she says, expressing a powerful sense of the absence that will linger as their images move on. 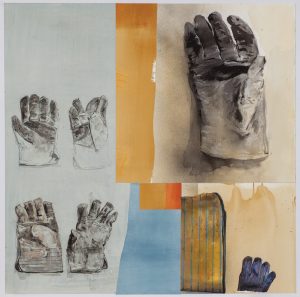 This new visual approach began evolving in 2016 after the sudden passing of Brown’s husband. At the time, she was close to finishing another highly representational work featuring a cowboy on horseback. “When solid ground fell away beneath me, and the previously tangible became elusive,” she obliterated much of the canvas in “an expression of overwhelming feeling about trying to remember and sometimes forgetting.” Yet, in the finished work — which she titled Going, Going — Brown paradoxically achieved a new level of satisfying artistic completeness. And the piece won recognition with the Artists Choice Award at the 2019 Coors Western Art Exhibit & Sale. 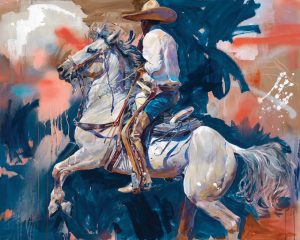 To successfully achieve such a complex visual duality takes a high degree of talent and training. Born in Birmingham, England, and obsessed with horses since childhood, Brown discovered her true drive to make art only when she went to work at a publishing company near London’s Tate Gallery “and spent all my lunchtimes there.” She went on to earn a Bachelor of Fine Arts at Goldsmiths College, University of London, and then moved to the U.S. to complete a Master of Fine Arts in the early 1990s at the University of Michigan. Eventually, married and with children, she settled in Colorado. Her Western-inspired art found its first commercial home in a now-departed shop called Tough Luck Cowboy in Boulder, where owner Shari Ross “took a chance and promoted my work when I started painting the horses around me.” 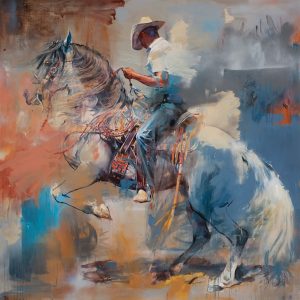 Brown’s tragic loss set her art on a new course. Not only did she dramatically incorporate abstraction, but she also explored other creative approaches. Contemplating the assortment of 138 individual work gloves left behind by her husband, an engineer who also “made things, built fences, fixed roofs,” she began processing her grief by artistically rendering each one through a variety of mediums, including watercolor, pastel, collage, and even the ancient technique of silverpoint, a form of drawing in which marks are made on paper using thin silver wire held in a stylus. She’s also used the latter process to create highly realistic little images of the West’s pack mules and burros. “I work big,” she says, referring back to her paintings, “and then I do 4-inch-square etchings of little burdened donkeys who are very delicate and yet incredibly strong.”
Sophy Brown is represented by Saks Galleries in Denver, Colorado.