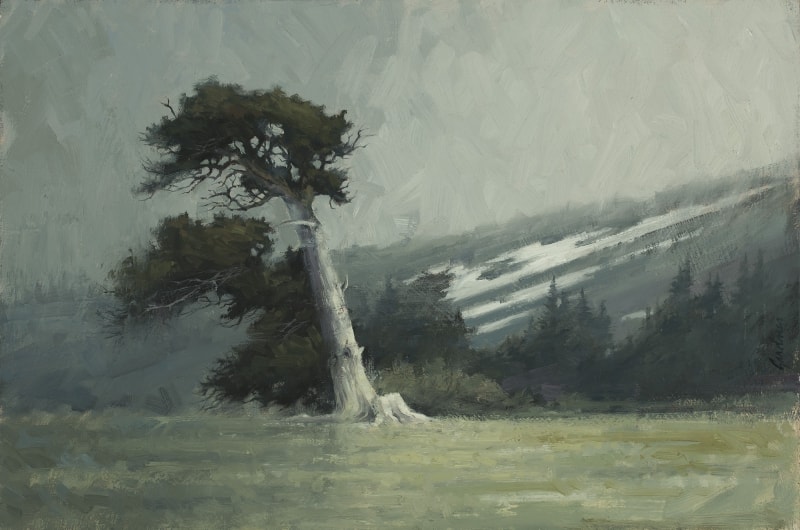 Oil painter Terry Gardner, an expressive tonalist, reaches for the essence of what it means to live in the West today while acknowledging the past. His work feels contemporary while at the same time touches on aspects of the historical. His paintings speak to the experiential nature of his subjects, whether it’s a walk in the sun-dry crunch of pine needles on a dirt trail, or the melee of ranch branding at 5 a.m.

“Process is definitely a major part of getting to the end result,” Gardner says. “I make sure I’ve breathed the air around the subjects.”

He takes black-and-white photos and sketches on site, but when he gets back to the studio, he continues to sketch, as well as create small color studies he calls “mini Rothkos.” Those studies determine the colors that will lead the work and help distinguish the values throughout. The reason he uses black-and-white photographs is so he’s not influenced by the picture’s color.

“The story I’m trying to convey can be told through the color choices I make as an artist,” he says. “Being a tonalist helps me to tell the story from an historical perspective, aside from the subject I’m portraying. That’s why I’ve always leaned more toward the studio process, it goes beyond the primary colors and allows my narrative to take shape.”

Recently, Gardner painted an old mining town called Ophir, located in the San Juan Mountains of Colorado. He was there in midwinter.

“I always think about the miners who experienced these harsh conditions,” he says. “Now the buildings are boarded up and abandoned. But it had squares of colors on the side of the building that really represented the diversity of people that went through there. Some of these mining towns have a melting-pot quality.”

Another subject that holds sway over Gardner is the Pony Express, especially its short, 18-month history. “It was such an undertaking,” he says. “It really shows the spirit of the West. But aside from that, it was an early sign of how important communications was and still is in the West, especially now that California is the leader in web-based communications.”

It’s Gardner’s expressive brushwork, his ability to get depth from a limited palette, and his emotional connection to the West that enable him to carry on a conversation about moving forward and not get stuck in nostalgia.

“I really want the paintings to be more than a depiction,” he says. “I don’t want to paint a pretty picture. What I am  trying to do with my work — whether it’s a tree that’s been around for 2,000 years or an abandoned building in a ghost town — [is to help] the viewer feel the spirit of the place, beyond its physical properties.”

Gardner feels that some of the impetus for movement in the West is going away. His work prompts the viewer to question the modern foundations of the West.

“I love history and I love the West, but the West is happening now,” he says. “While a lot of my work is considered traditional Western art, I’m also pushing the process, and I’m bringing in something that’s never been done before.”

Gardner is represented by the Ann Korologos Gallery in Basalt, Colorado, and Altamira Fine Art in Jackson Hole, Wyoming. He’s shown his work at the Coors Western Art Exhibit & Salefor 15 consecutive years and will participate this year, January 6 through 21, in Denver, Colorado.