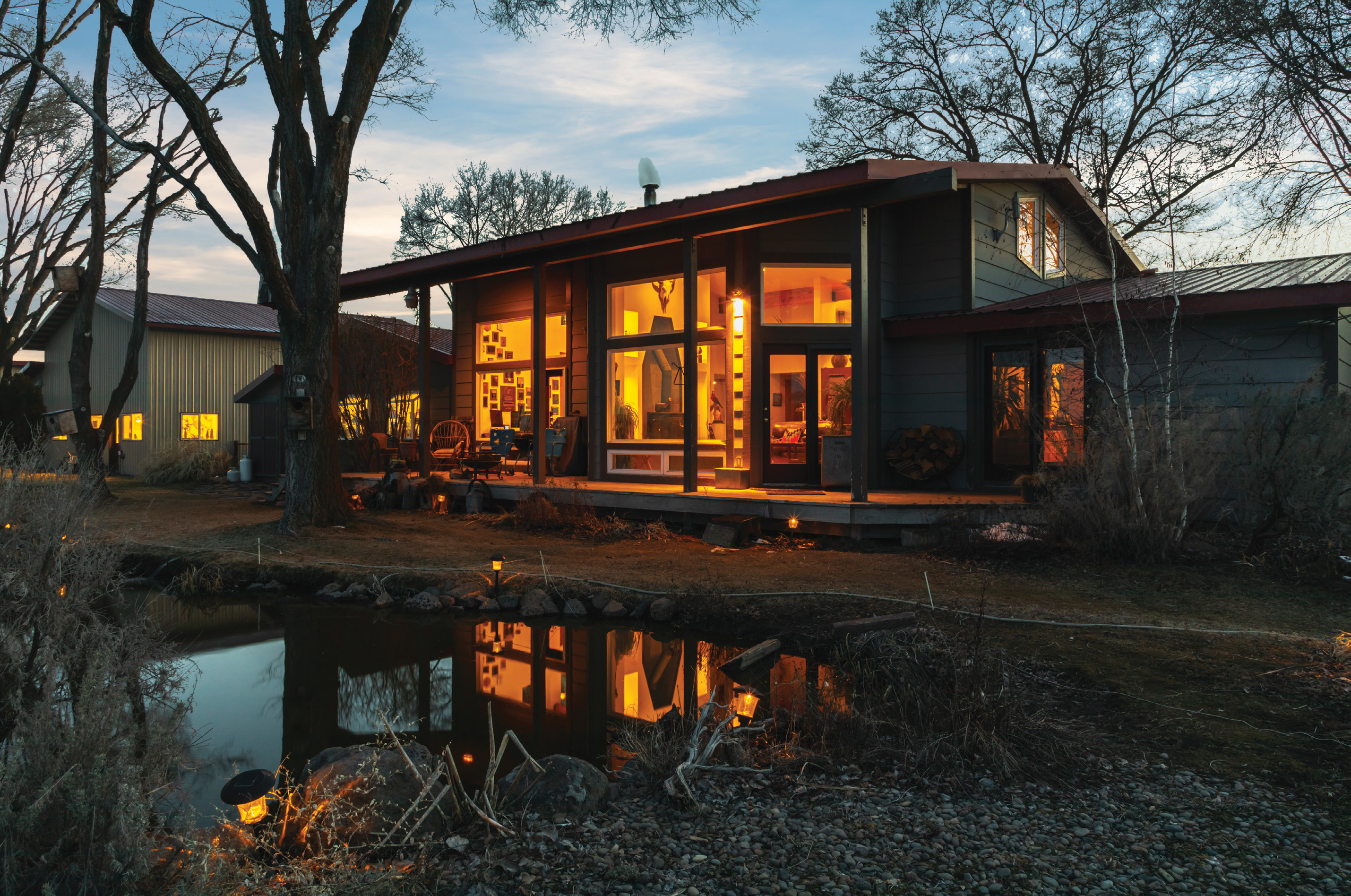 Artist Stefan Savides compares Johnny Cash’s song "One Piece at a Time" to the original construction of his residence, where bits of an internment camp and scraps from a lumber mill were gathered to build it. After purchasing the home and a substantial remodel, the back of the house was wrapped in windows for viewing birds in their natural habitat.

20 Jan In the Studio: Building Peace

Waterfowl migrating along the Americas find respite annually in the extensive wetlands and open waters of the Klamath Basin, a wildlife oasis that stretches from Southern Oregon to Northern California. Known as the Pacific Flyway, the migration route boasts more than a million birds a year, according to the area’s Audubon Society, and is home to an impressive concentration of bald eagles and 11 different owl species. 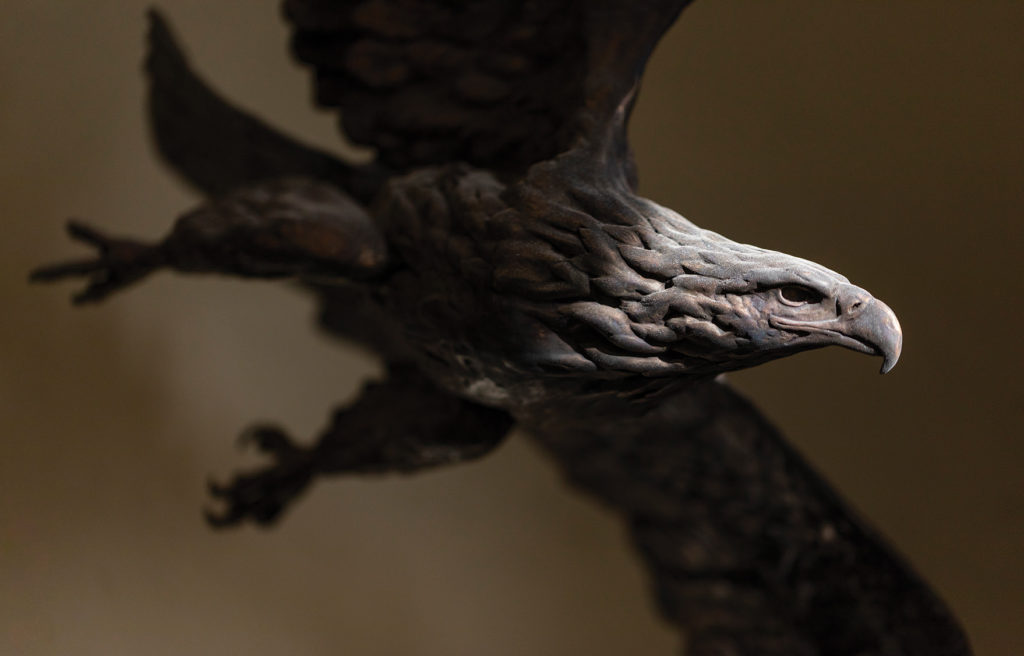 The Klamath Basin boasts the largest wintering concentration of bald eagles in the Lower 48.

Klamath Falls, the basin’s most populated city and appropriately nicknamed Oregon’s “City of Sunshine,” is a premier spot for birding and hunting quests. It’s what initially drew lifelong bird aficionado and sculptor Stefan Savides to the area. The sizable hunting populace offered him a straightforward path to his accomplished taxidermy career, which subsequently resulted in a livelihood in sculpting.

“For a while, I migrated too, just like some of the birds I sculpt,” recollects Savides, as he describes spending eight months in the San Francisco Bay Area and summering in Klamath Falls. “But it was my strong vision that called on me to be a full-time resident of Klamath Falls.” 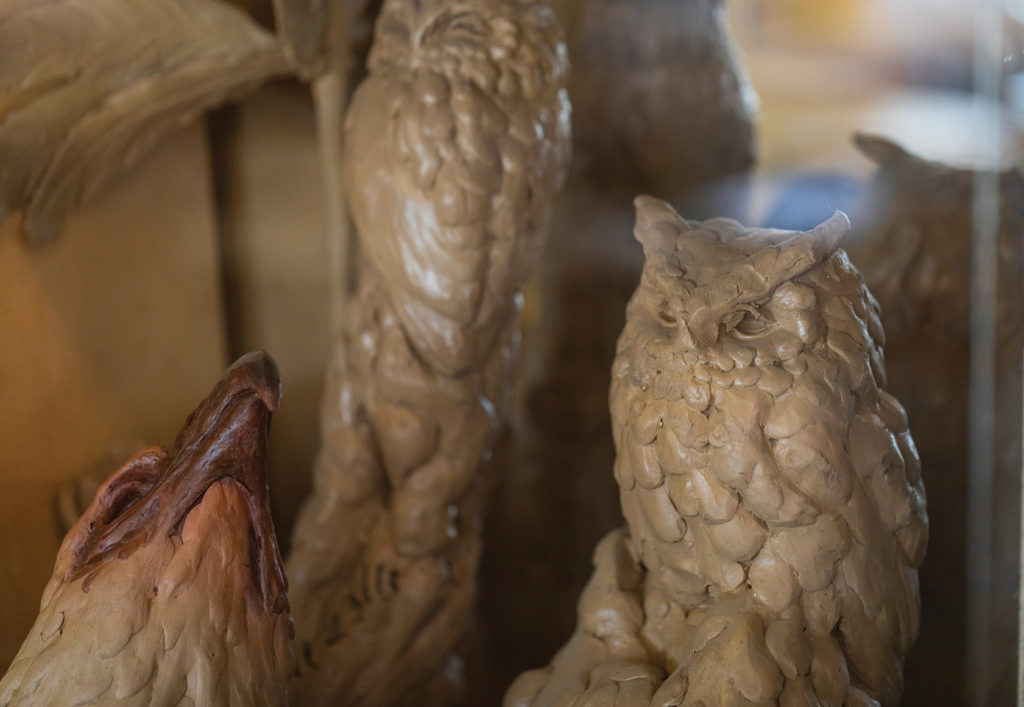 Eleven owl species live in the Klamath Basin, providing the artist with ample opportunities to sculpt from nature.

The vision Savides references is a custom pond at his studio that would offer refuge to his favorite subjects, illustrating further his natural ability to predetermine his path. His “build it and they will come” inspiration quickly fostered a migration of waterfowl and turned an empty piece of land into an aviary haven. Today’s inhabitants also include other animal visitors and expectant birds who find safety in the sanctuary. 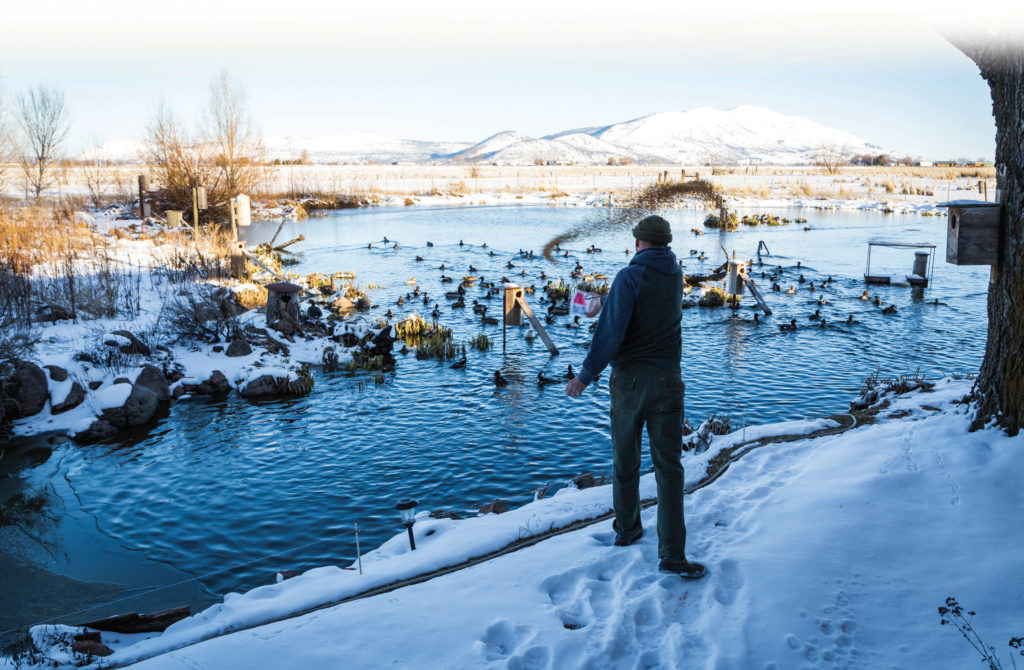 Today, Savides’ studio and living space reflect decades of passion for all feathered species, including a pond designed and created by Savides himself.

“Having the pond as the focal point of my home and studio creates an overpowering peace. It’s like when you go to the dentist and peer into the fishbowl in the waiting area, and you suddenly forget you’re at the dentist,” Savides jokes. “It overshadows everything else.”

Savides states that much like certain unpleasantries of the dentist, Klamath Falls has had some less desirable attributes. In World War II, the town housed two Japanese internment camps. When the war ended, locals were given the opportunity to buy the barracks. Some were repurposed as chicken coops and sheds. Others were cast off as homes, which was the case with the Savides residence. 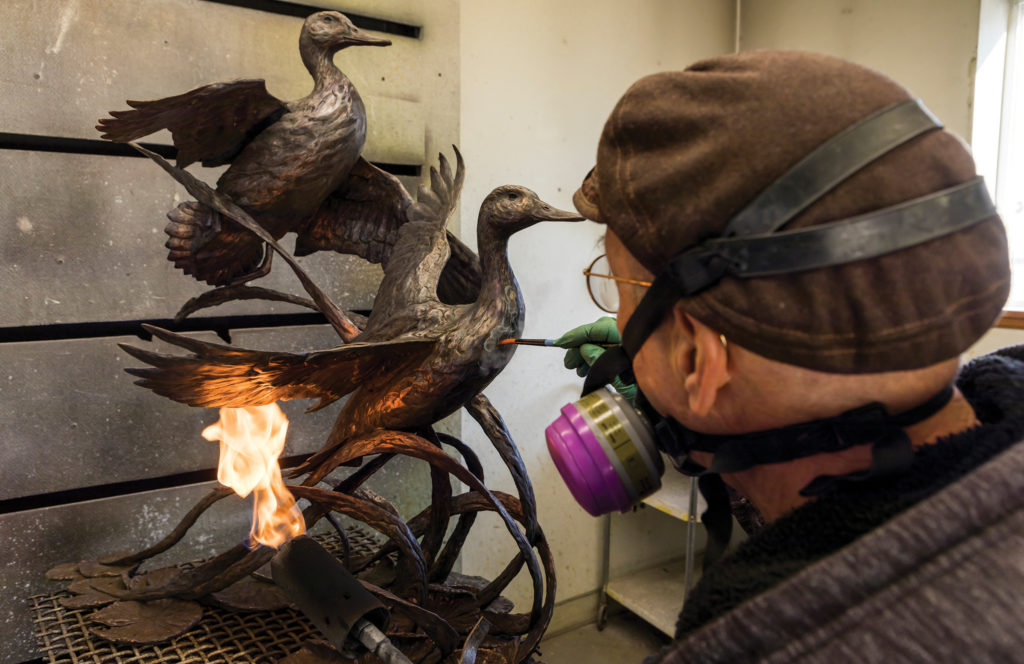 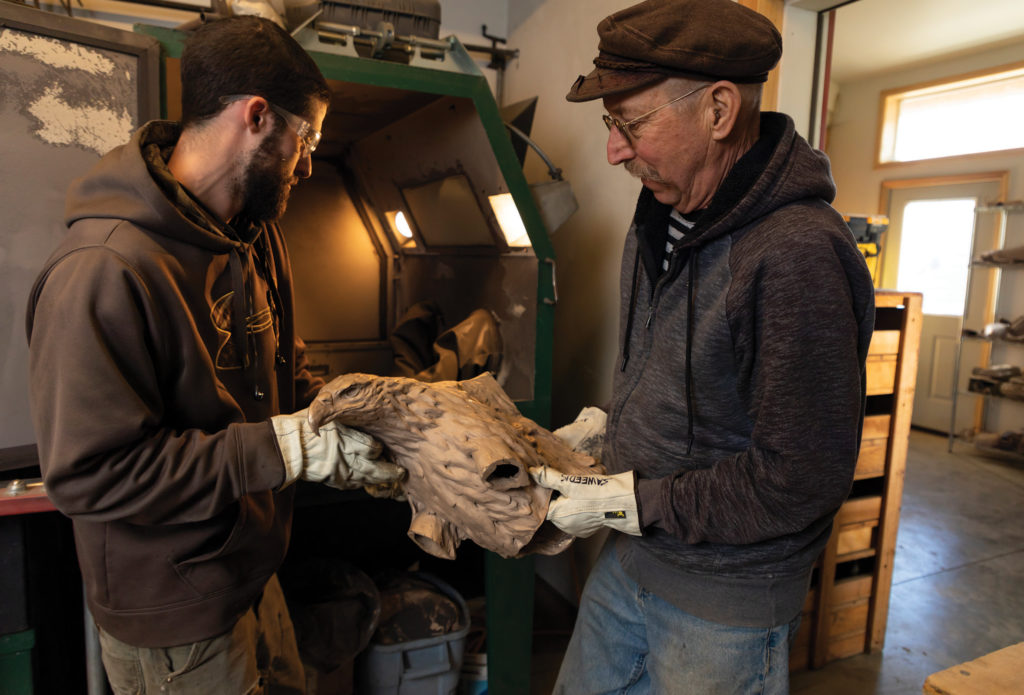 The symbiotic nature in which each family member contributes to the sculpting process lends itself to an efficient and successful outcome. Both his wife and son have a hand in turning Savides’ concepts into tangible creations. Art as a family affair evolved from Savides’ childhood. His mother, a three-dimensional artist, whom he calls his largest mentor and biggest critic, introduced Savides to the art world and encouraged his creativity. 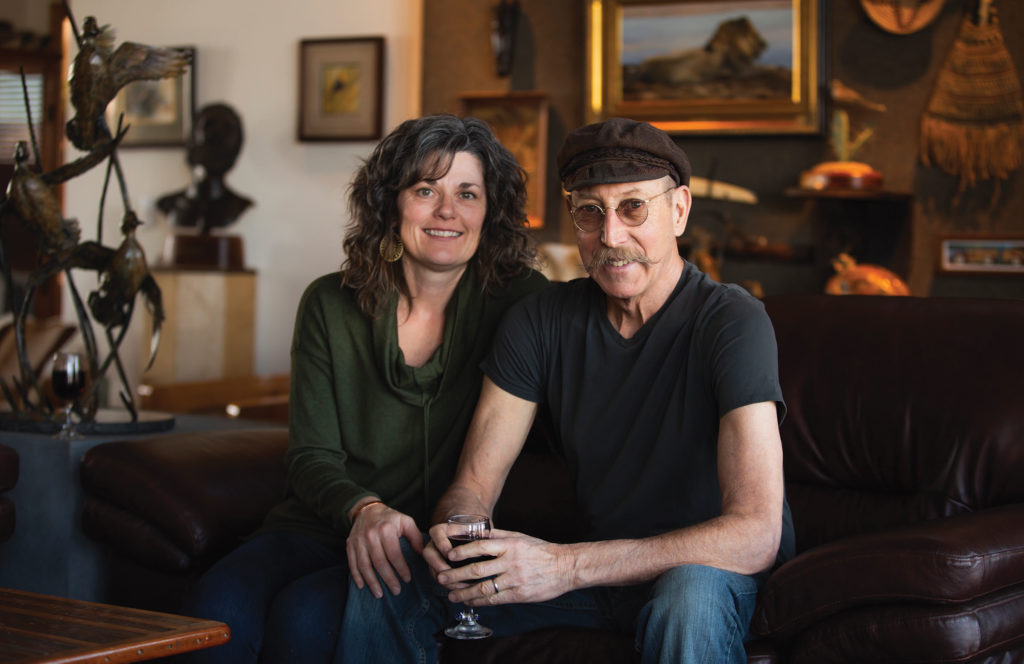 “Historically, Klamath Falls was a lower socio-economic community,” Savides says. “People used whatever they could to build their homes, including scrap material from the timber mill. We gutted our home, but in order to stay within building codes, one wall and the flooring in a bedroom is from the original internment shack.”

The rebuilding of an unflattering past took shape systematically and purposefully with art nooks showcasing Savides’ work and picture windows looking out to what he upholds as his greatest creation, the pond, as well as open skies and distant mountains. “Natural light and beauty, bringing the outside in, is insanely
important to me,” Savides explains. “Wildlife sculptors don’t have the opportunity to hire a model. We can work from photographs, or in some cases, mounted subjects, but with the pond, I have three-dimensional birds in my line of sight at all times.” 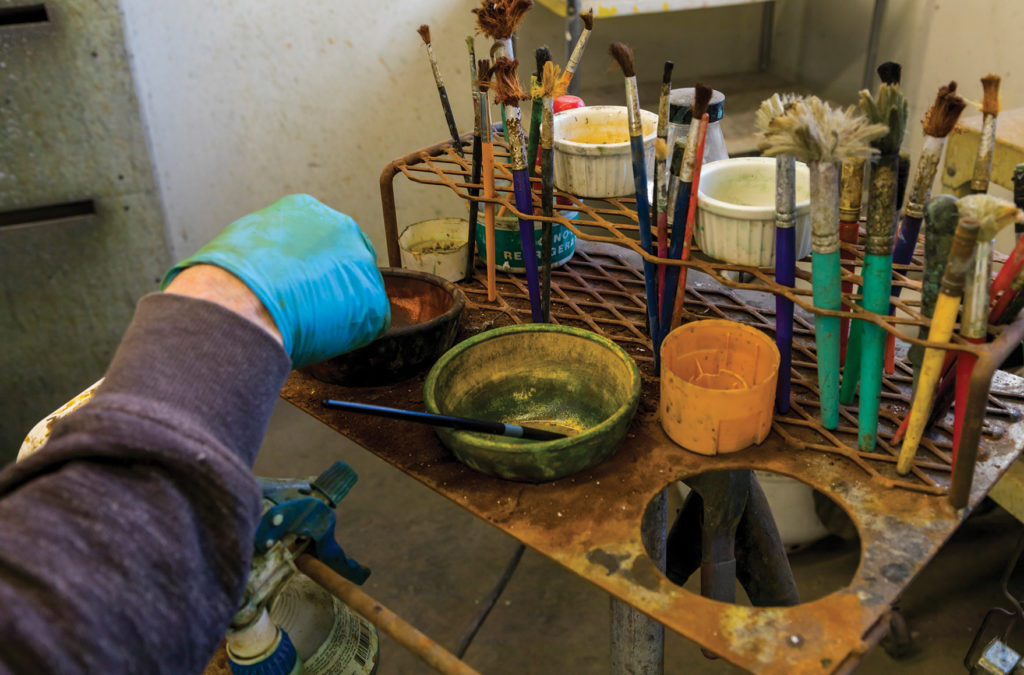 Well-worn tools of the sculptor’s trade in Savides’ studio

The art nooks that display Savides’ sculpted birds are staged for collectors. People who visit his studio, which encompasses the full gamut of a foundry — from wax molding and chasing to metalwork and final patina — are then invited into his home. “Our home is a happy place,” he says. “It exudes positivity and warm feelings. We enjoy sharing that energy. When collectors see the art staged, it creates the desire to own it. They want a piece of our happiness and serenity.”

The Savides enterprise is a family-run operation. “I feel we do more than most sculptors in terms of our hands-on process,” Savides reveals. His “lovely bride,” as he refers to his wife of five years, tends to the wax chasing — the art of repairing imperfections left behind from the wax mold. The piece is then shipped to a foundry for metal pouring. The raw material comes back to the studio, and their son, Joe, cares for all the metalwork. Savides undertakes the final patina application himself. 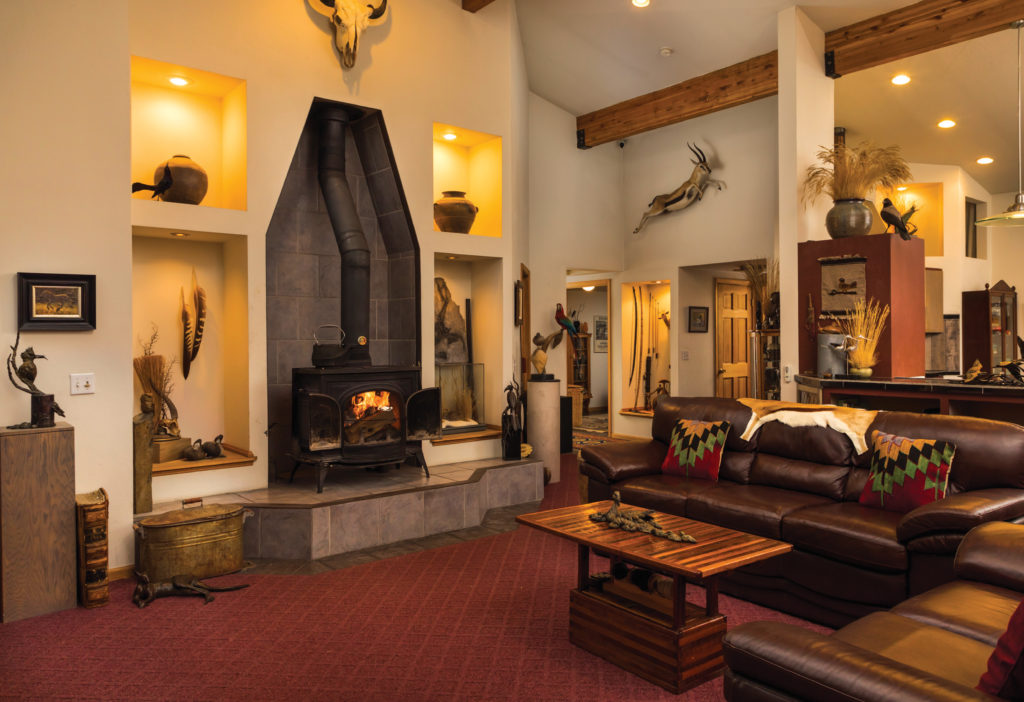 Savides acknowledges that his studio and living quarters offer insight into his brain in the way they are methodically laid out, decorated, and organized. He admits that his creative focus becomes short-circuited if his surroundings are undone.

When asked about the most rewarding aspect of the sculptor’s artistic venture, Savides responds, “The part that carries me is the initial design — capturing a slice of the bird’s life for the viewer.” He further explains his expectations of himself: “Flawless anatomy is paramount to me, but it doesn’t need to be captured in a tight rendering. Coming from taxidermy, and then working in clay sculpture, it’s easy to make the piece more and more perfect. My goal is not to swap looseness in lieu of knowledge, but to capture the essence of the bird with less detail.” 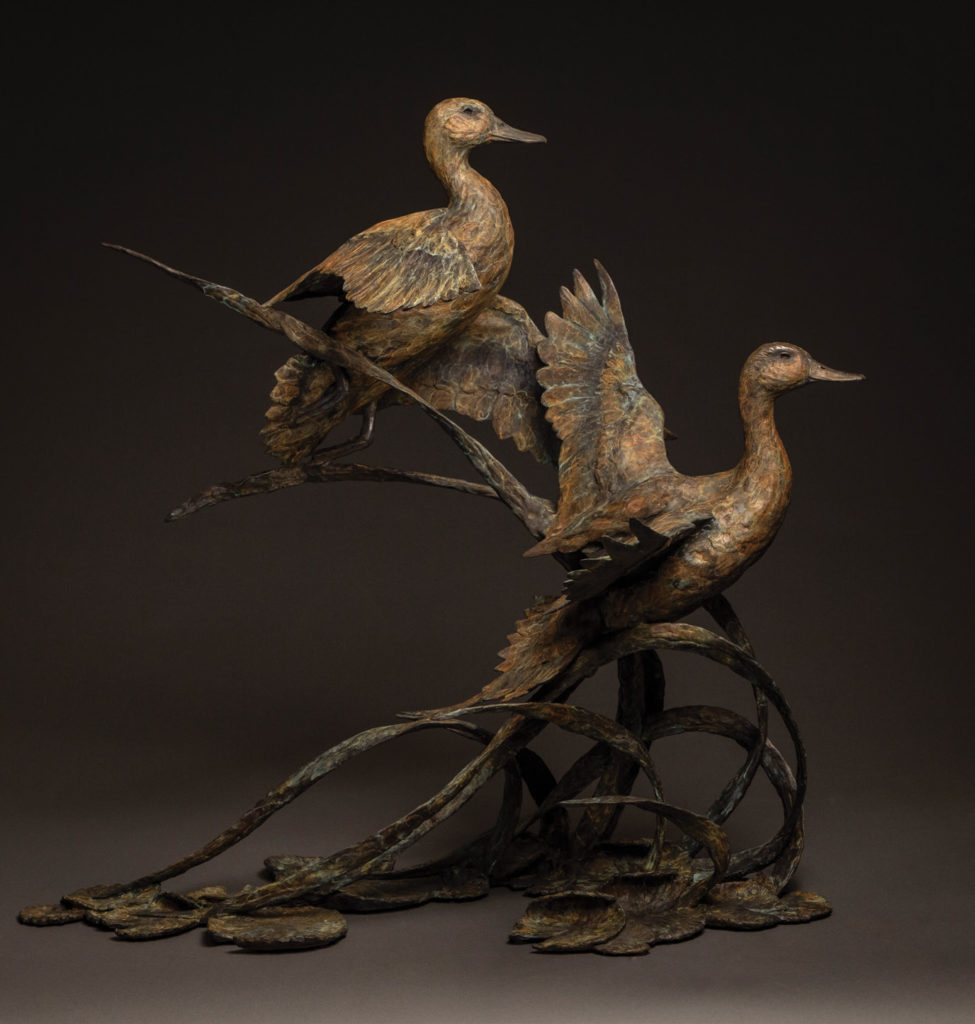 Birds have intrigued Savides since his earliest memories. While most boys his age were involved in Boy Scouts, Savides was the procurer of the Junior Audubon Society and, during the summer months, a day camp naturalist. As a teenager, he began learning the basics of taxidermy, and within a couple of years, he was teaching night school classes on it the topic.

Savides acknowledges that trends in art have changed, with modern art increasing in appeal. However, he trusts that wildlife art will only grow more captivating with urbanization. “Bird populations are dwindling,” he says. “Images of wildlife are going to become more precious. Wildlife art was the first art form depicted by indigenous people. It’s not going anywhere soon.”