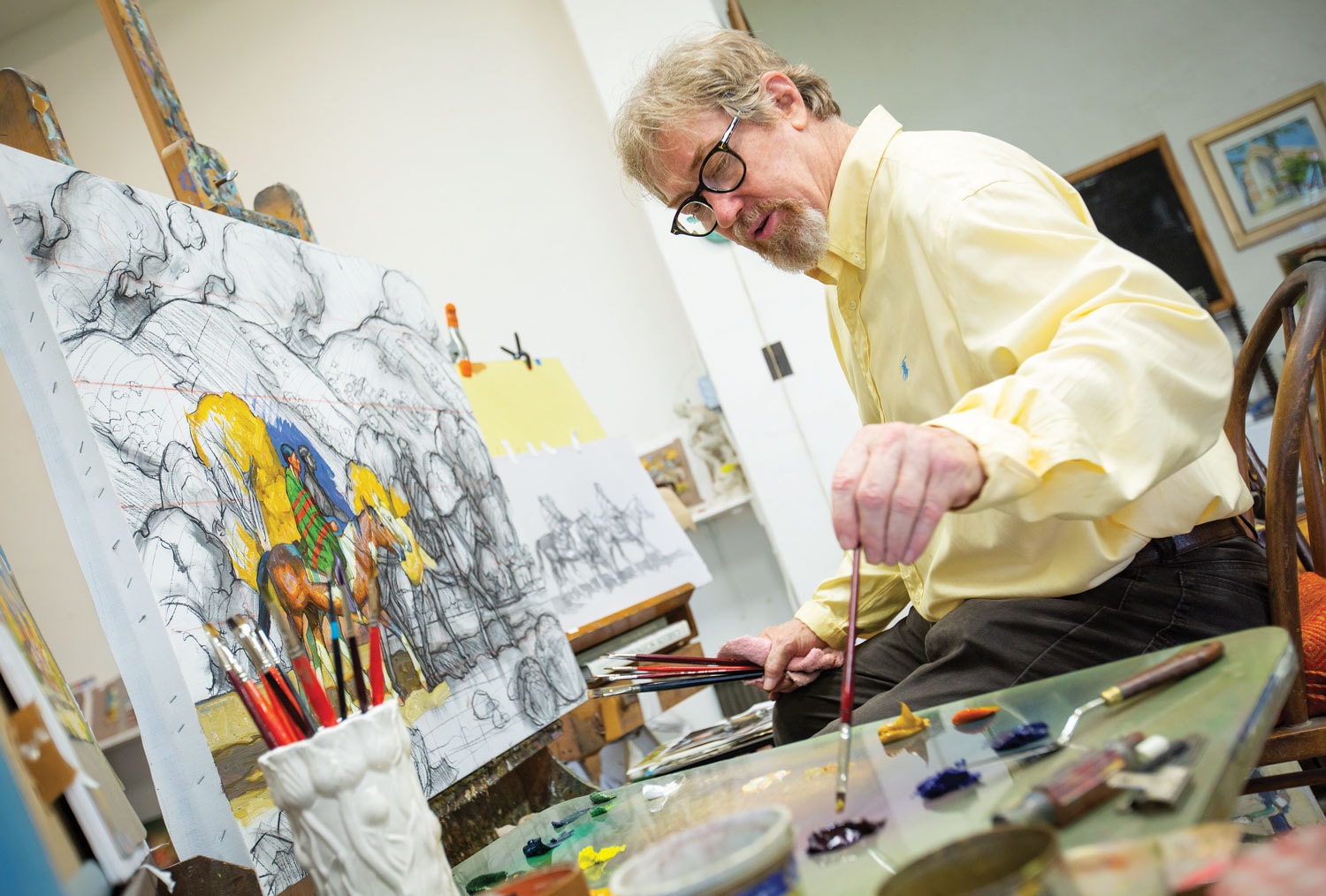 11 Sep In the Studio: Exploring the Old West’s Serenity in an Inspirational Garret

in In the Studio, October | November 2019 | Written by Norman Kolpas | Photographed by Andréa Cimini 0 Comments
Share

About five years ago, award-winning Western and plein-air painter Tim Solliday learned he’d have to vacate the Pasadena, California, studio where he’d worked for more than a decade. The one-time atelier of famed early-20th-century painter and illustrator Frank Tenney Johnson had provided Solliday with ample space and inspiration for creating his canvases of cowboys and Native Americans. 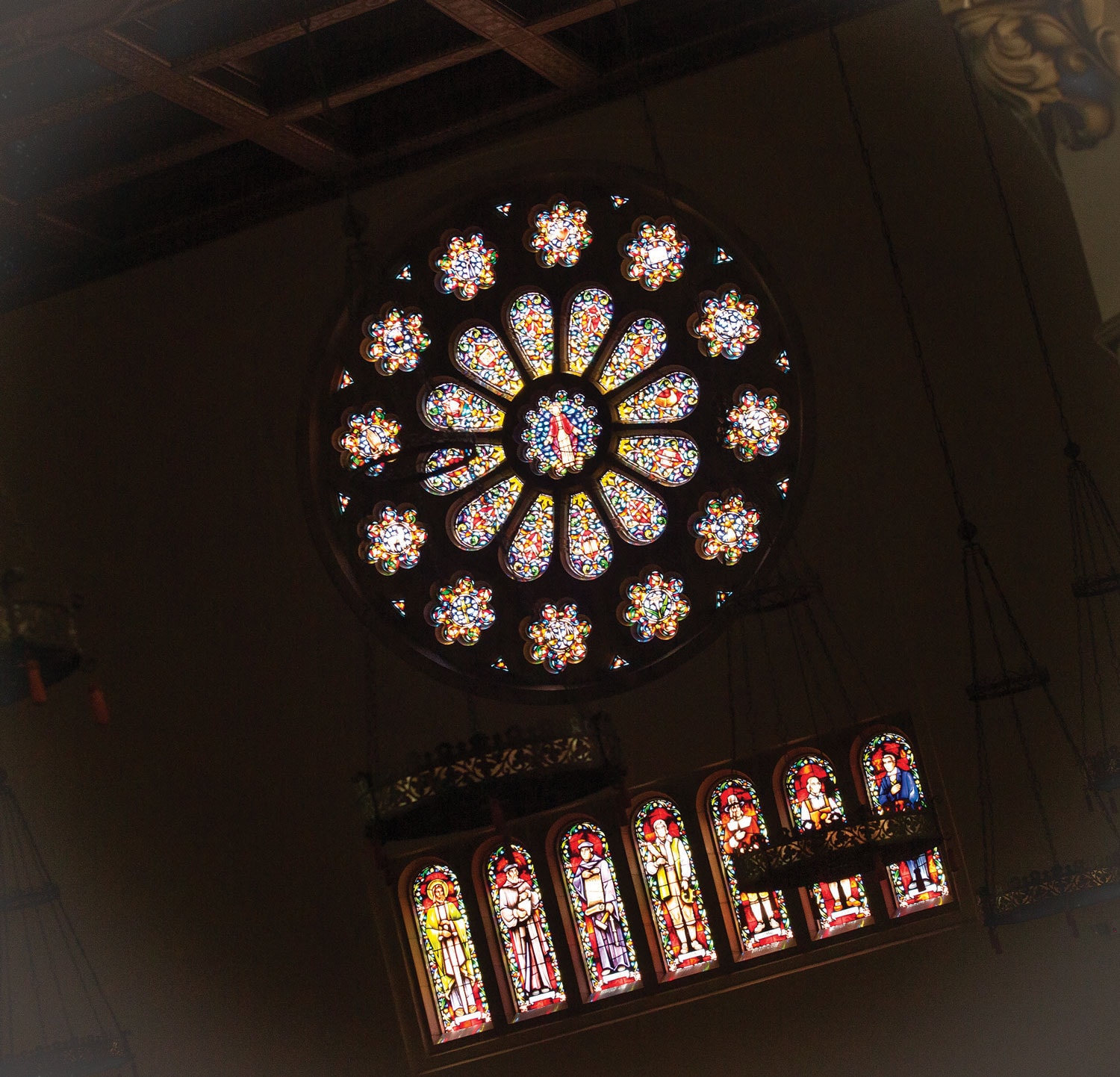 During his work week, Solliday sometimes takes a brief break in the church’s main sanctuary, with its elaborate stained glass windows. “It’s very peaceful and beautiful in there,” he says.

With the same diligence he applies to his meticulously executed artworks, Solliday asked friends if they knew of any available studios. He scoured the streets and classified ads of the San Gabriel Valley, northeast of downtown Los Angeles, where he has lived since his childhood years on Southern California’s scenic Palos Verdes Peninsula. 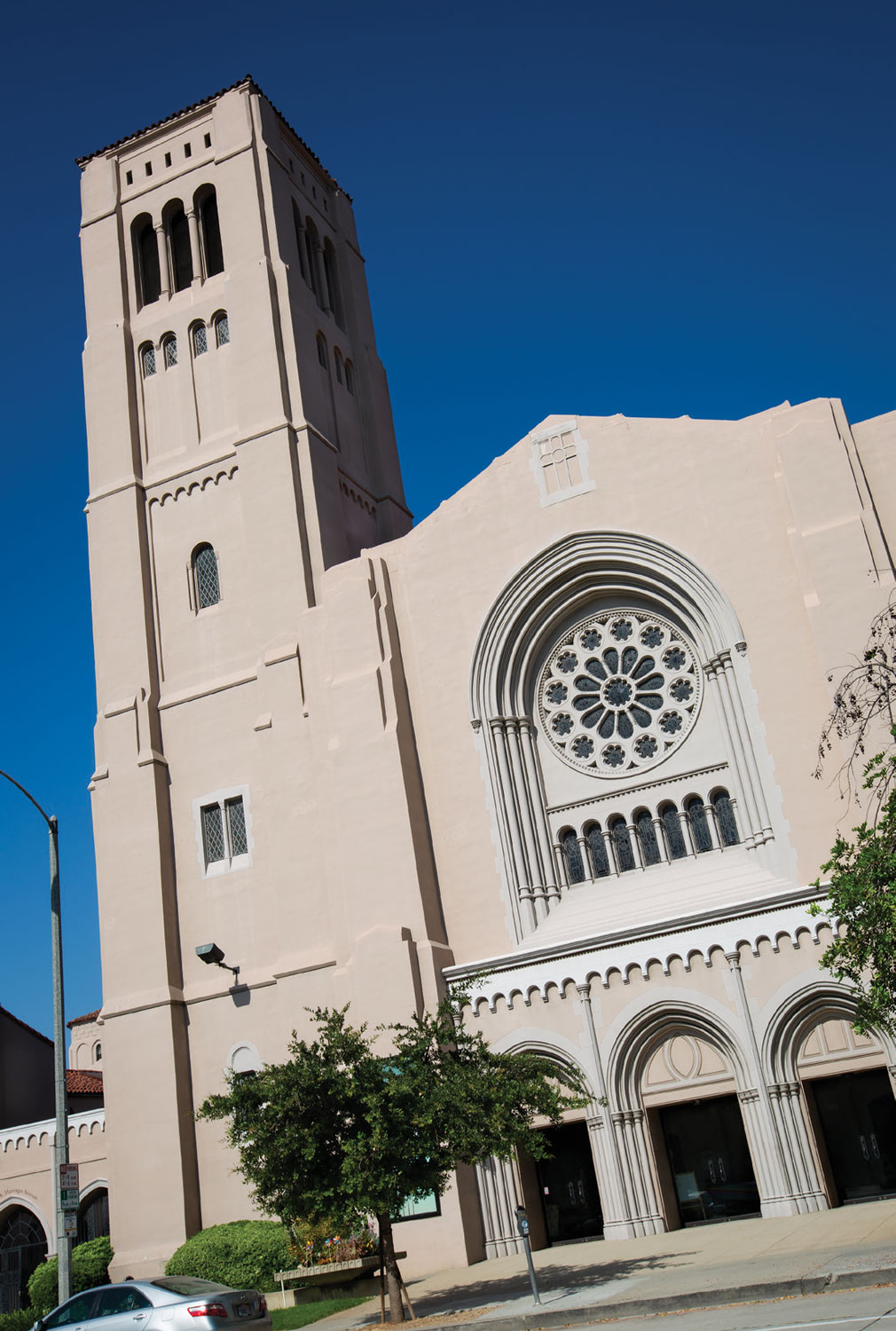 Designed by architect Carleton Monroe Winslow Sr., and built in 1925, Pasadena’s First Baptist Church is distinguished by a bell tower, or campanile, just to the left of its façade.

But Solliday turned inward as well, seeking the help of the higher power that has supported him his entire life. “I’ve always trusted in God,” he says. “I put my faith in him and say, ‘Okay, you made me this way. So give me the things I need.’ And he does.”

Some acquaintances mentioned that they were renting rooms for their private school in the 1930 educational building of the First Baptist Church of Pasadena, a stately Romanesque-Gothic Revival house of worship built in 1925 in the heart of the city’s civic center. Church officials, says Solliday, “showed me one or two offices with low ceilings.” He wasn’t interested.

Then, as he was about to leave, they added: “We do have one more place, but you probably won’t like it.” Their assumption came from the fact that the most direct route to the remote room in the top rear corner of the church complex involved climbing four steep flights of stairs. Once Solliday reached it, though, he responded instantly: “I’ll take it!” 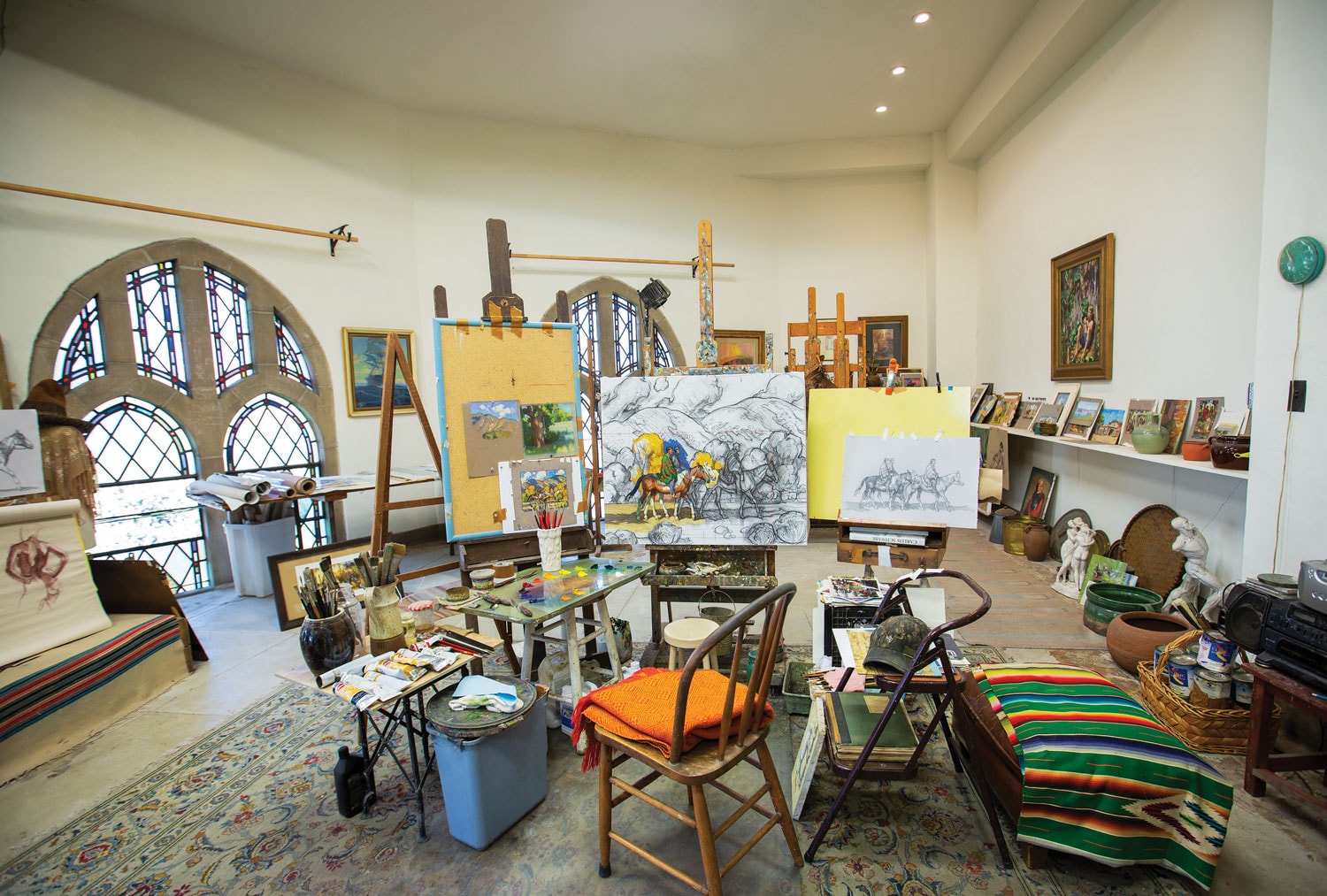 In Solliday’s studio at the back of the church complex, activity centers on his easel, with worktables, reference materials, and storage organized around the periphery.

Visiting Solliday’s studio now, it’s easy to understand why he didn’t hesitate. Measuring 900 square feet, the place feels even more spacious thanks to 15-foot ceilings. The tops of arched Gothic-style stained-glass windows punctuate its exterior walls, and those without fenestration form multiple nooks and crannies where the artist stores and displays a wealth of items reflecting a lifetime dedicated to art; from reference books to pencil and gouache studies, ribbons won in early plein-air exhibitions to an assortment of props: cowboy hats, bows and arrows, woven rugs, swords and scabbards, a stuffed boar’s head, and other miscellanea. 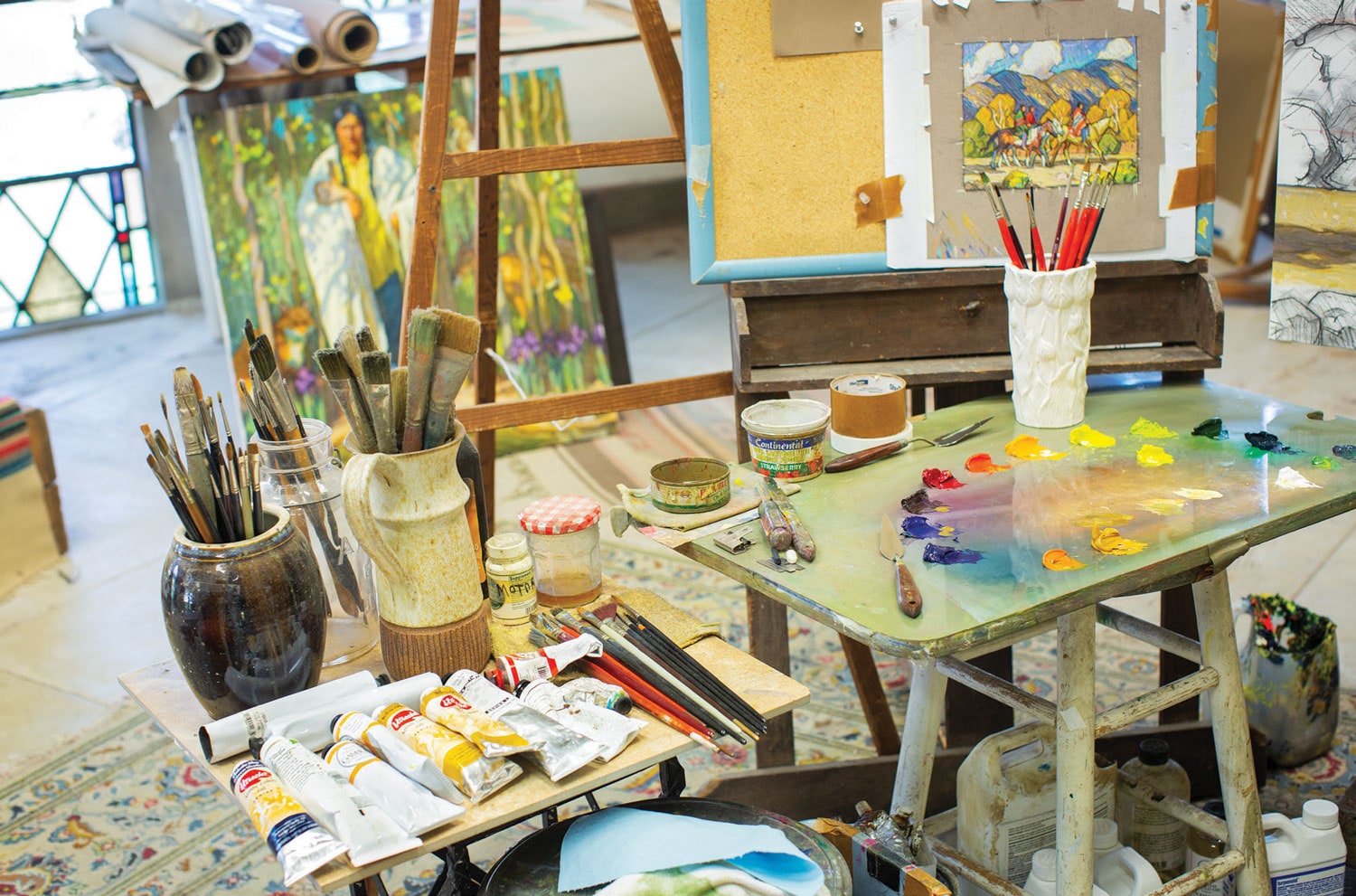 A pastel study for the painting Autumn Shadows is taped to a smaller easel to the right of the work area. A wide variety of supplies — includ- ing small tubes of paint (along with larger cans, not visible below), brushes for broad and detailed application, palette knives, turpentine, and rags for cleanup — are methodically arranged within easy reach. On the floor behind an empty easel stands Reflection, a tranquil scene of a white-robed Native American man standing beside the water.

At the center of the room stands his easel, where on a recent visit he’s busily at work on Cattle Drive, one of the more than 18 paintings destined for his two-years-in-the-making solo show, October 5 through 26, at the Maxwell Alexander Gallery in Los Angeles. Tacked or taped to bulletin boards on either side of the canvas are the artist’s detailed drawings — a horse here, various cowhands there, the lead cowboy astride his steed, a saddle, close-ups of flared equine nostrils — on which he works out elements of the complex composition. To the left, on an oversized palette atop a stool, 16 daubs of different oil colors in a neat oblong array await mixing and brushing onto the canvas in ways he carefully orchestrates to draw in viewers’ gazes and excite their imaginations. His pageant-like scenes burst into life. 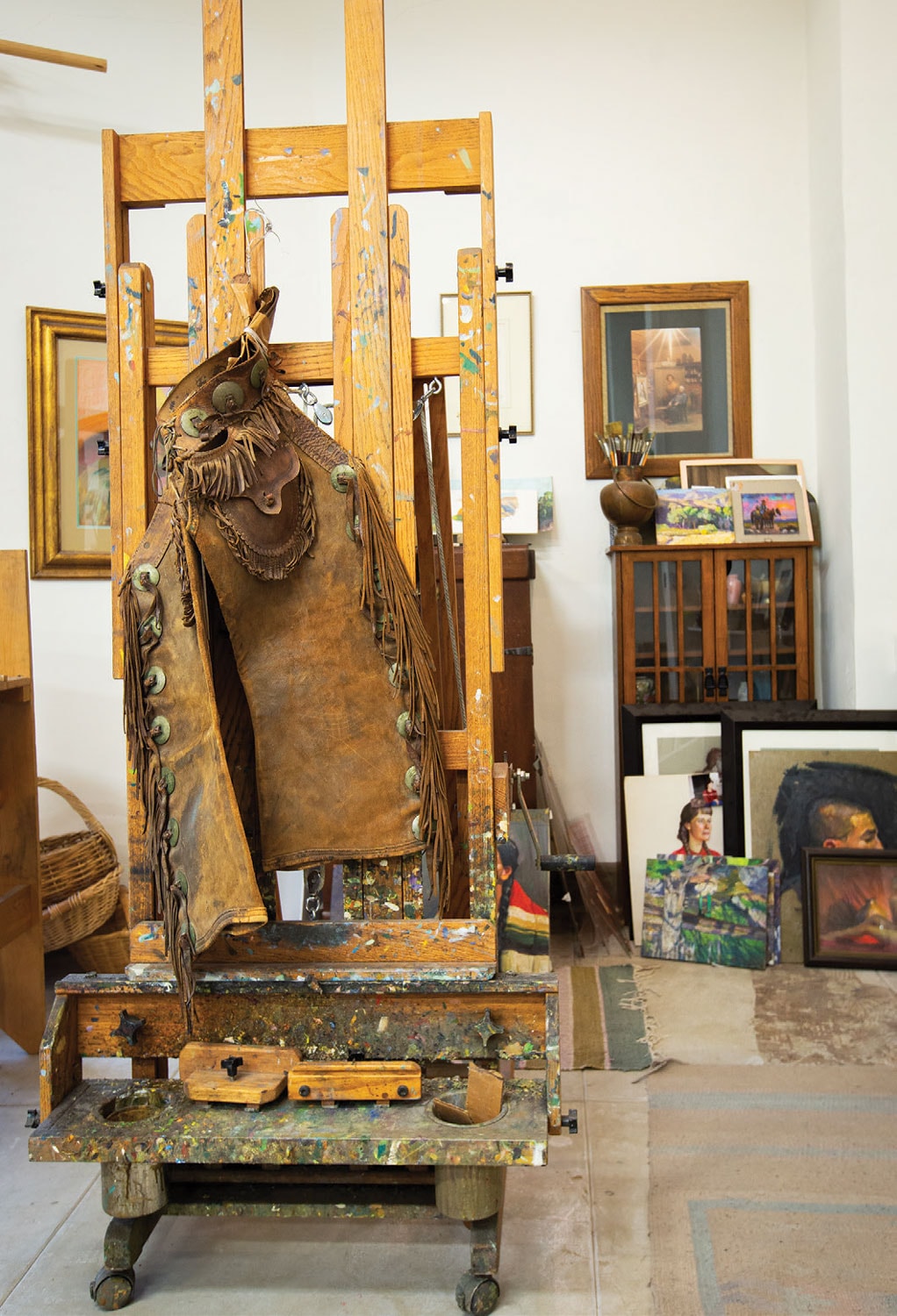 Displayed on the far wall beyond an old pair of fringed stovepipe chaps hung on an easel, Solliday can see a framed photograph of his mentor, master plein air painter and portraitist Theodore Lukits.

“Take that cowboy with the gloves on,” says Solliday, pointing to the most prominent figure. “He’s a pretty neat cowboy, so I gave him a cadmium-red shirt. You put the most intense color where you want peoples’ eyes to go.”

Though a few tubes of professional oils from familiar brands are arrayed nearby, most of his paints come out of quart-sized cans he orders online from the makers of Classic Artist Oils. He came to rely on those large-volume containers when he went to work as a billboard painter in the late 1960s. Over almost a decade, Solliday painted gargantuan advertising images of everything from a girl in a swimsuit to a dog chasing a car, a juicy hamburger to a young Barbra Streisand in the movie “Funny Girl.” 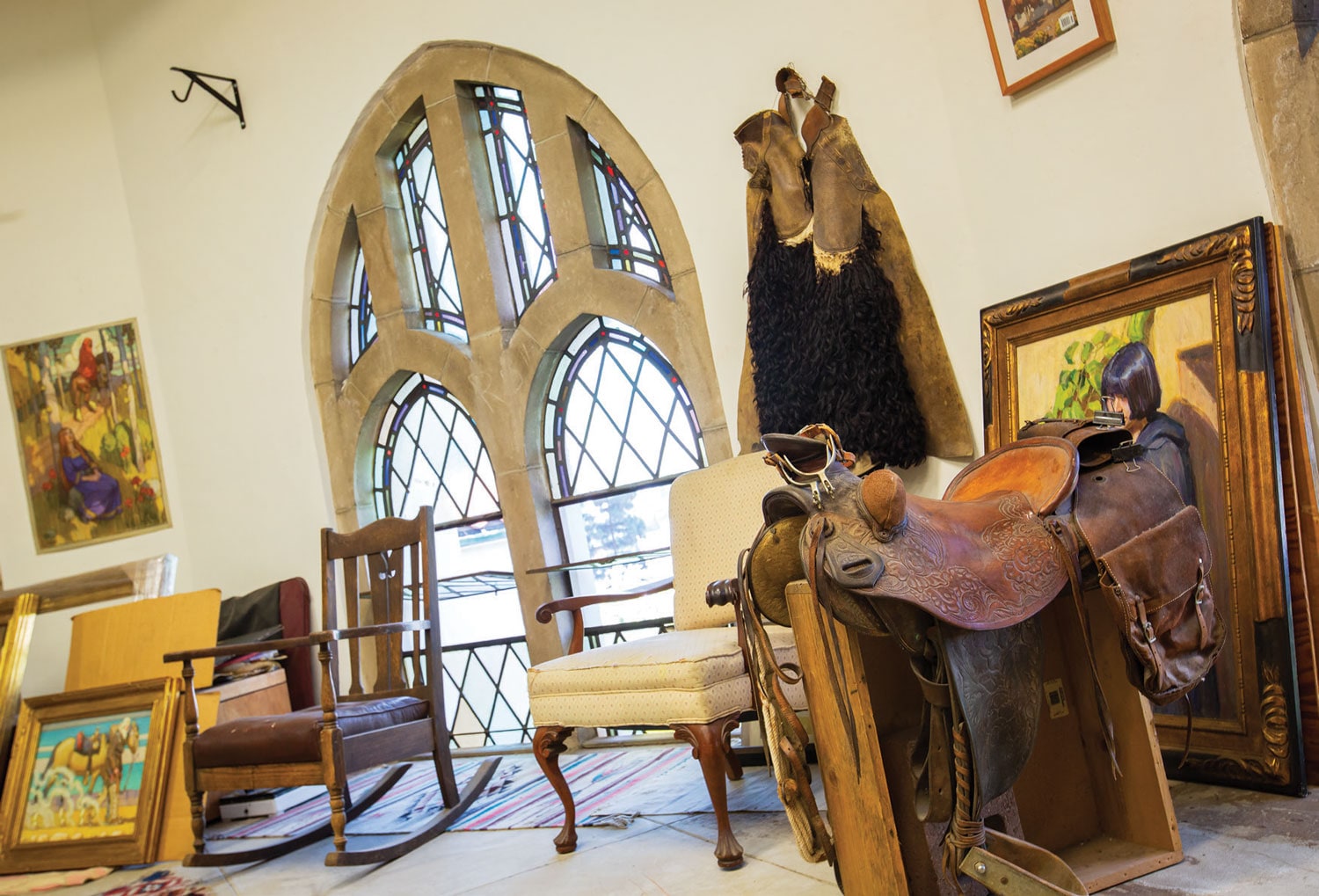 After a long stair climb, visitors are welcome to rest in an antique armchair or rocker near one of the arched windows.

Soon after he started at the billboard company, two veterans who recognized his talent suggested he take lessons from Theodore Lukits. The Romanian-American artist was a graduate of Chicago’s Art Institute in 1918 and won a postgraduate traveling scholarship to study under Art Nouveau master Alphonse Mucha. Lukits then settled in Los Angeles, where he established a widely admired reputation as a plein-air landscape painter and portraitist of early Hollywood stars like Pola Negri, Theda Bara, and Dolores del Río. 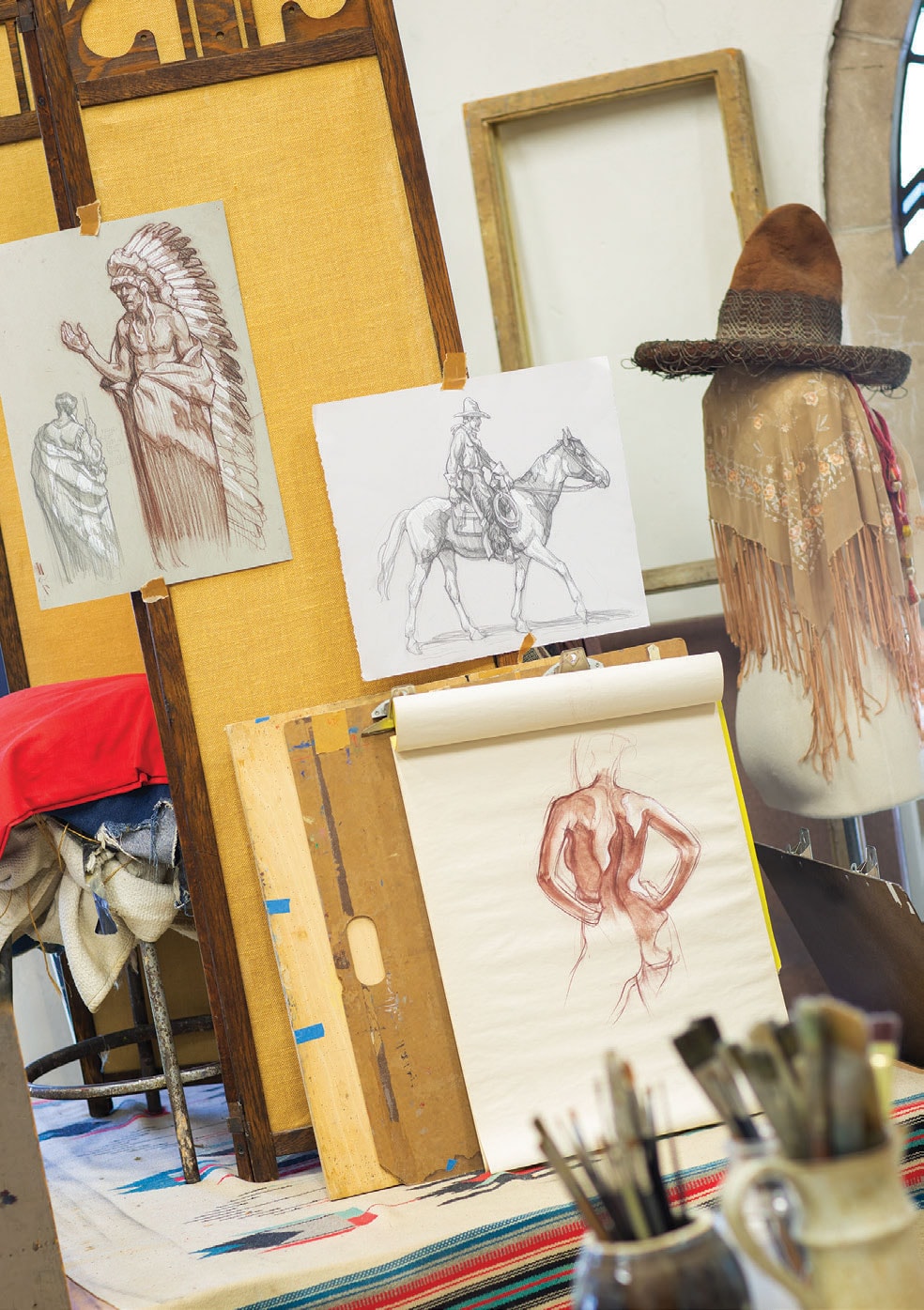 Studies for paintings in progress are within sightline of the artist’s easel.

In his later years, the artist conducted private painting classes in the Lukits Academy of Fine Arts, working out of his spacious Spanish-style home off Wilshire Boulevard in Los Angeles’ Miracle Mile neighborhood. That’s where Solliday headed one evening after work at the billboard company. “‘Don’t bring any paintings,’” he recalls Lukits telling him over the phone. “‘Only drawings.’” He smiles at the memory of that first meeting. “I stayed there for hours while he looked at my work. He was impressive and welcoming,” Solliday says. 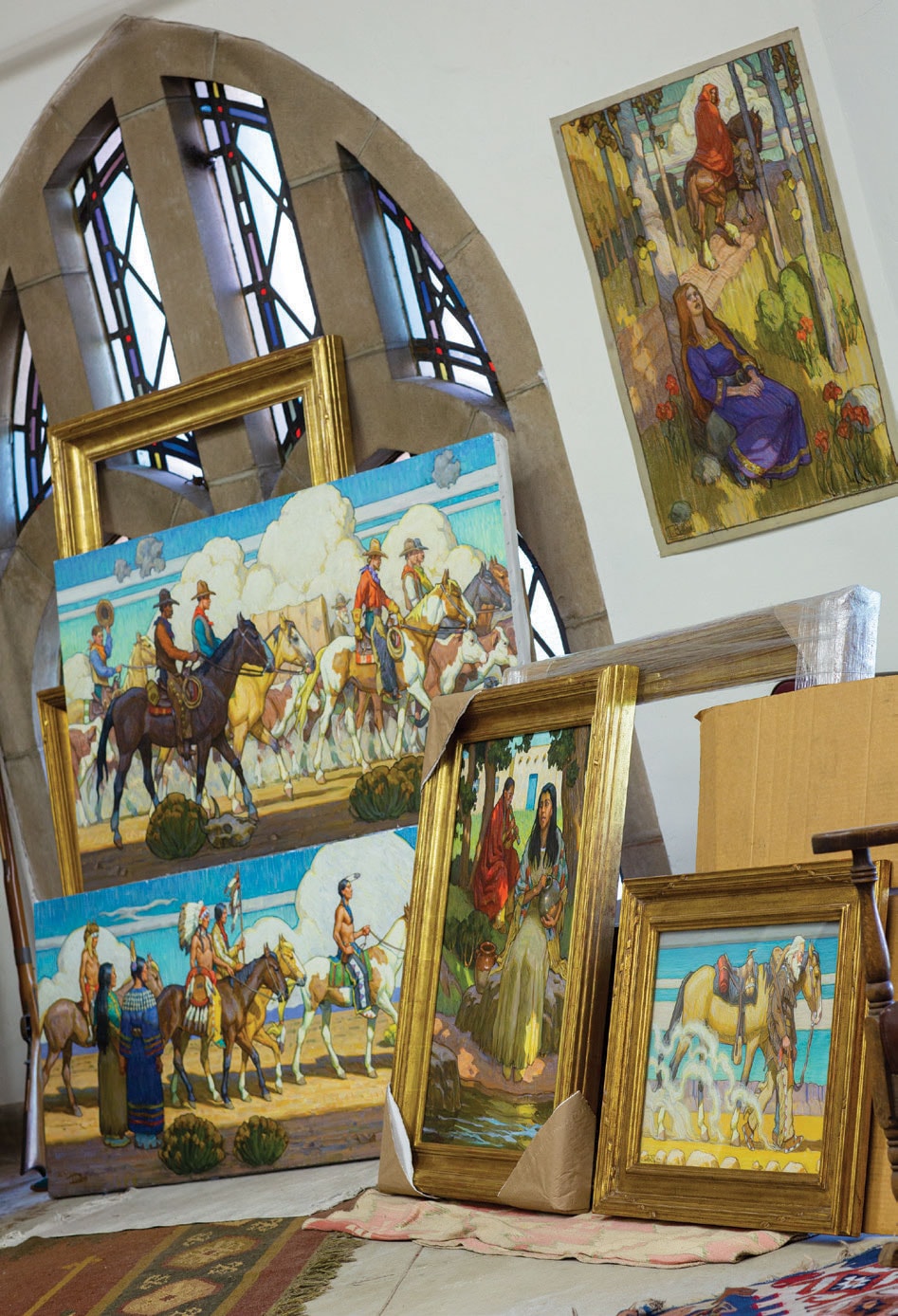 Completed paintings destined for Solliday’s October show, including the large horizontal canvases The Cattle Drive and War Party, are arrayed near one of the studio’s Gothic-style win- dows. On the wall to the right of the window, hangs a pastel Solliday created in 2010 as part of the California Art Club’s trio of exhibitions celebrating Wagner’s “Ring Cycle” from the Los Angeles Opera Company.

Thus began some six years of classic atelier-style studies under Lukits. Solliday attended two evenings a week while continuing to paint billboards full time. The back-to-basics lessons began with a year focused solely on drawing, followed by another year painting using only black and white oils — the better to concentrate on composition, form, values, and lighting.

As warmly as Solliday evokes his mentor, one nook in the corner of his studio speaks even more eloquently of their connection. In his line of sight whenever he glances up from his easel, Solliday can see on the wall, just a few steps away, a framed color photograph of Lukits sitting peacefully in his own studio. 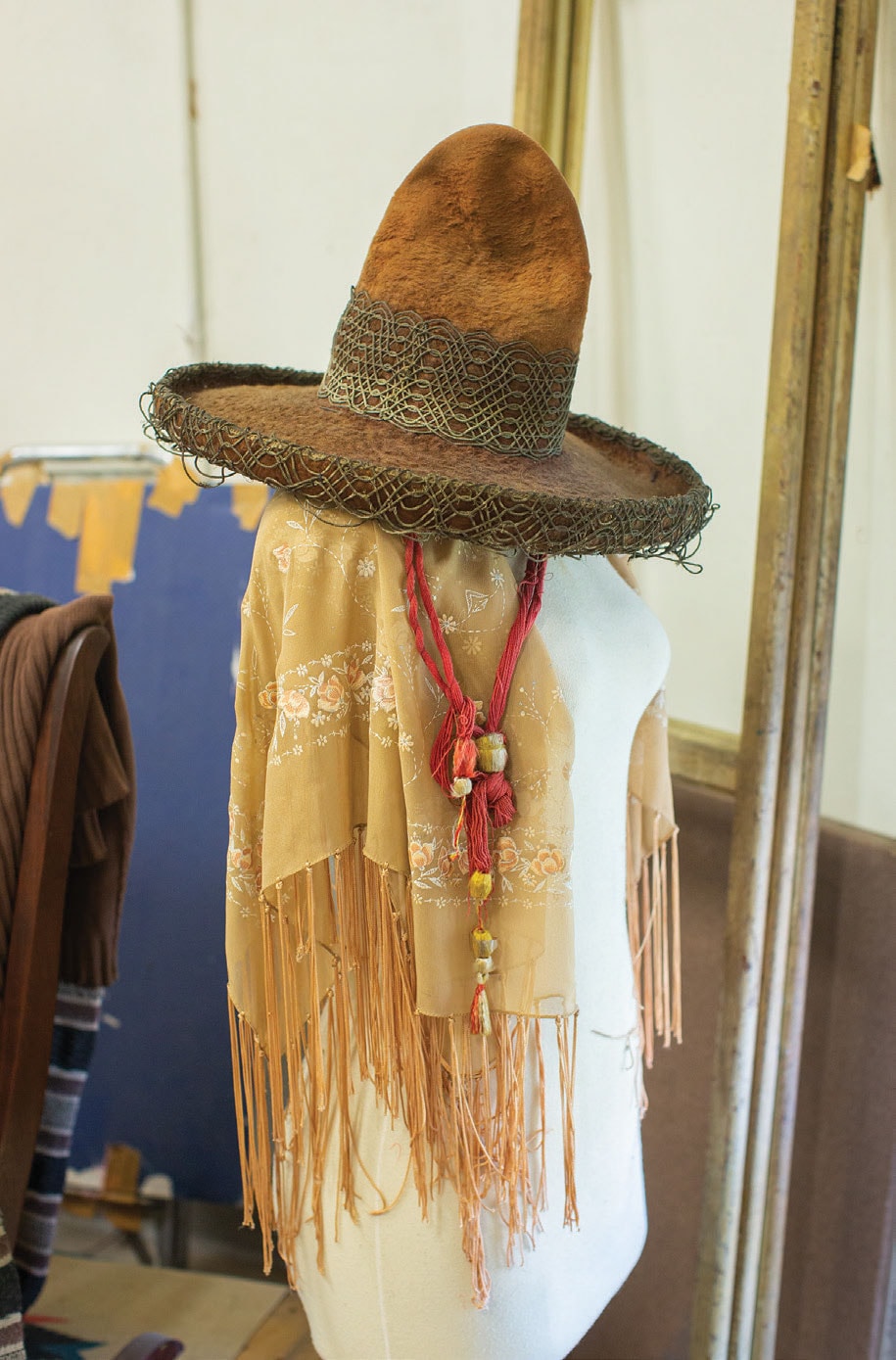 A shawl draped over a dress form is topped by a beaver-fur sombrero — given to Solliday by Theodore Lukits — once worn by an extra in the 1952 film “Viva Zapata!” starring Anthony Quinn and Marlon Brando.

Solliday seems to possess that same air of serenity as he goes about his work, high in the garret-like reaches of the First Baptist Church. He grants that, thanks to the setting, his highly engaging compositions may have become a bit more contemplative, particularly in scenes like those cowboys heading out to drive the dogies or another large canvas depicting a Native American funeral procession. “All the paintings are thoughtful, yet they’re also entertaining at the same time,” he says. 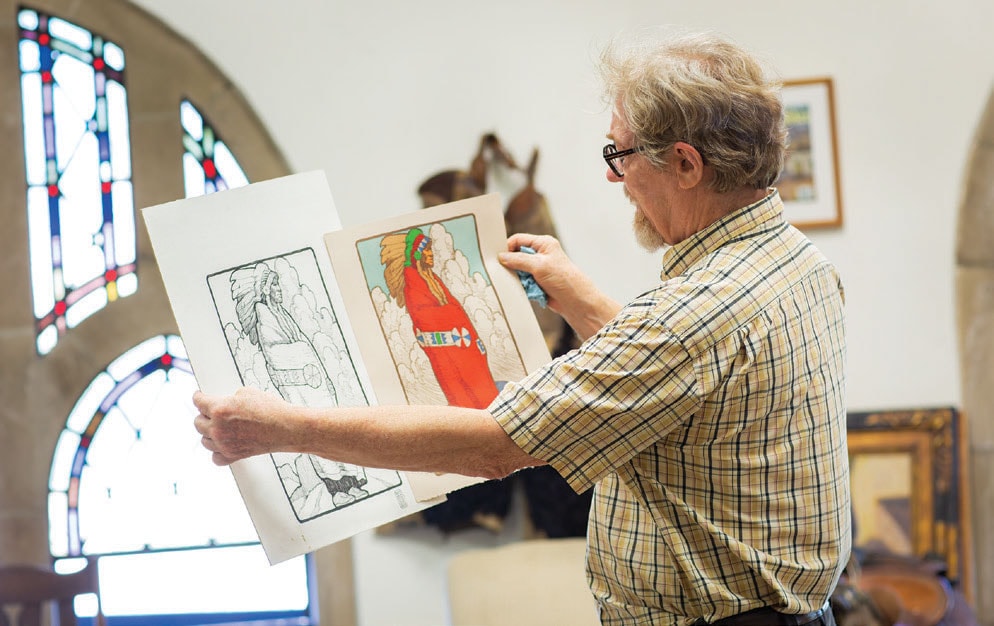 Solliday examines sketches and color studies he’ll use to create a larger painting.

“I already have a very spiritual point of view,” Solliday concludes. “So being in this church has complemented it, both physically and spiritually. Even in downtown Pasadena, it feels like a refuge. Here, with the presence of God about you, I constantly harken back to the fact that this is what he made me to do. And now, in his own house, he’s provided a place for me. And I’m really grateful.”