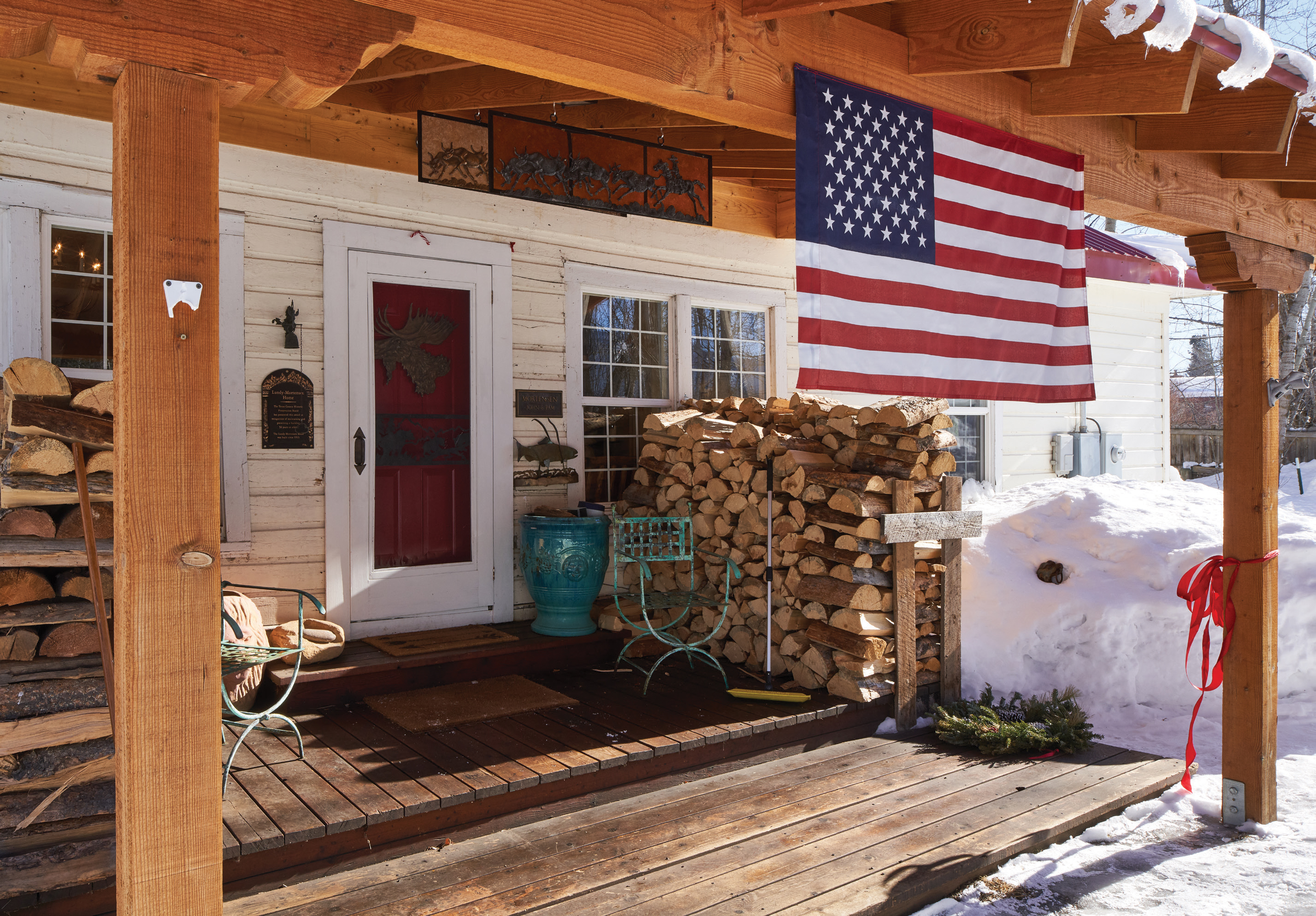 15 Nov In the Studio: Grounded in the Past

When John Mortensen’s house was built in 1913, it anchored a burgeoning town at the key intersection of the remote high-altitude valley that early fur traders had dubbed Jackson Hole. Situated on Fish Creek at the base of the Tetons on the west side of the valley, the house was part of the first semblance of civilization that pioneers encountered after crossing over the pass from Idaho into Wyoming. In those days, the town had a saloon, hotel, post office, and livery stable, and the former owner of Mortensen’s house operated the general store across the street. 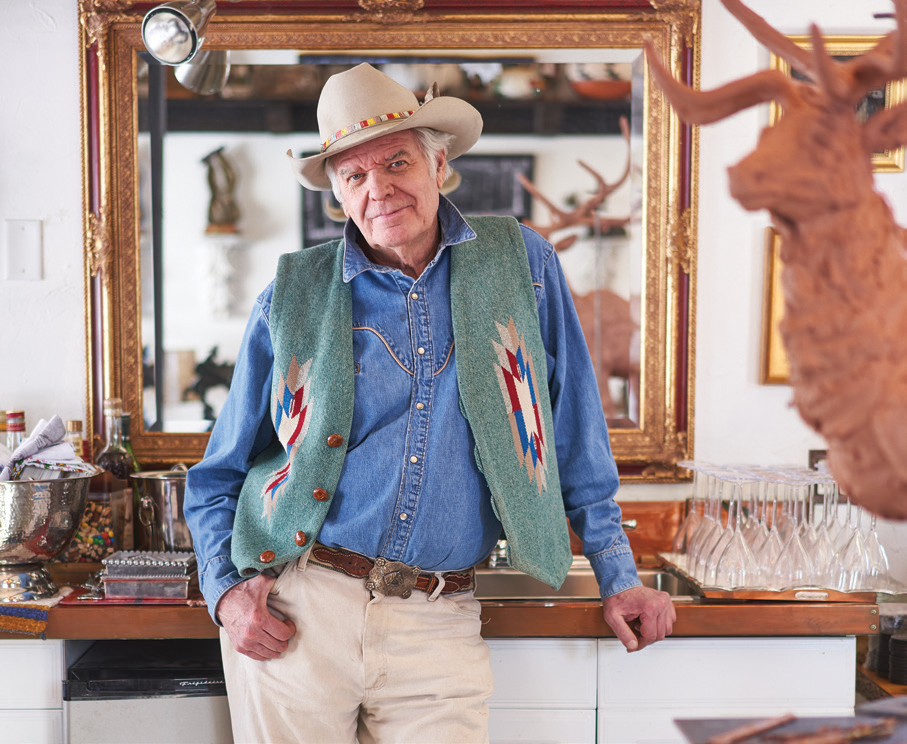 Artist and consummate Westerner, John Mortensen has spent a lifetime creating and collecting. As part of that process, he turned his 1913 Wyoming home and studio on the banks of Fish Creek into a living museum.

A century on, stagecoaches have given way to private planes and RVs, and the center of gravity has shifted east into Jackson Hole proper. But Mortensen’s home — which sits on a small compound with a guest cabin and art studio — is a type of time capsule. From furniture to collections to artwork to the buildings themselves, every item connects the present day to the artist’s personal history and to early life on the range, when the West was still wild. 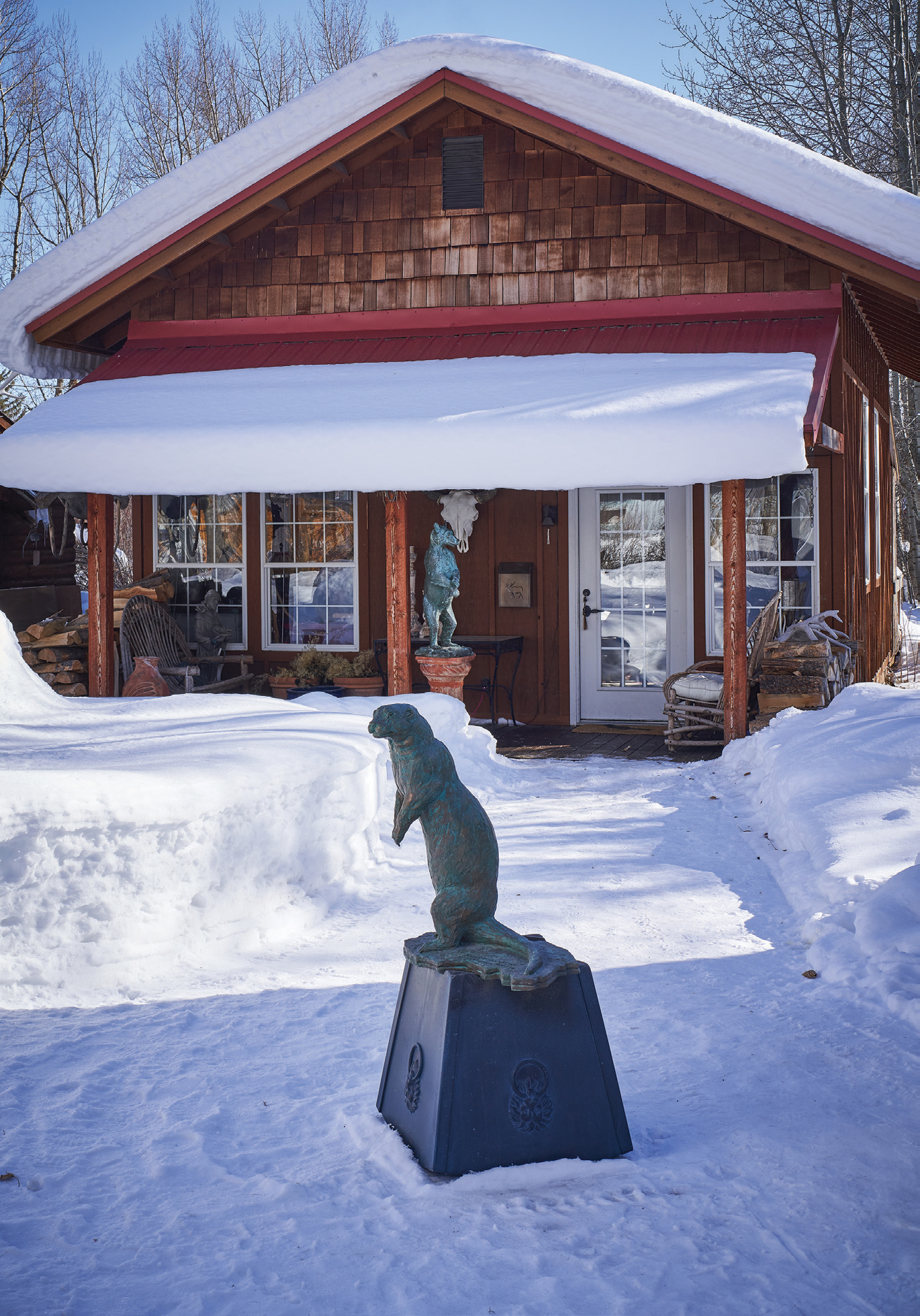 The art experience begins outside with life-sized sculptures of native fauna in naturalistic poses, such as Mortensen’s bronze called Teton Otter.

Although raised in Salt Lake City, Mortensen has a deep history in Jackson Hole and the rural Mountain West. Horses and the ranching lifestyle were primary themes in his life from his earliest days, and the artist went on to show and train horses and work on ranches amidst some of the most iconic scenery in the world. 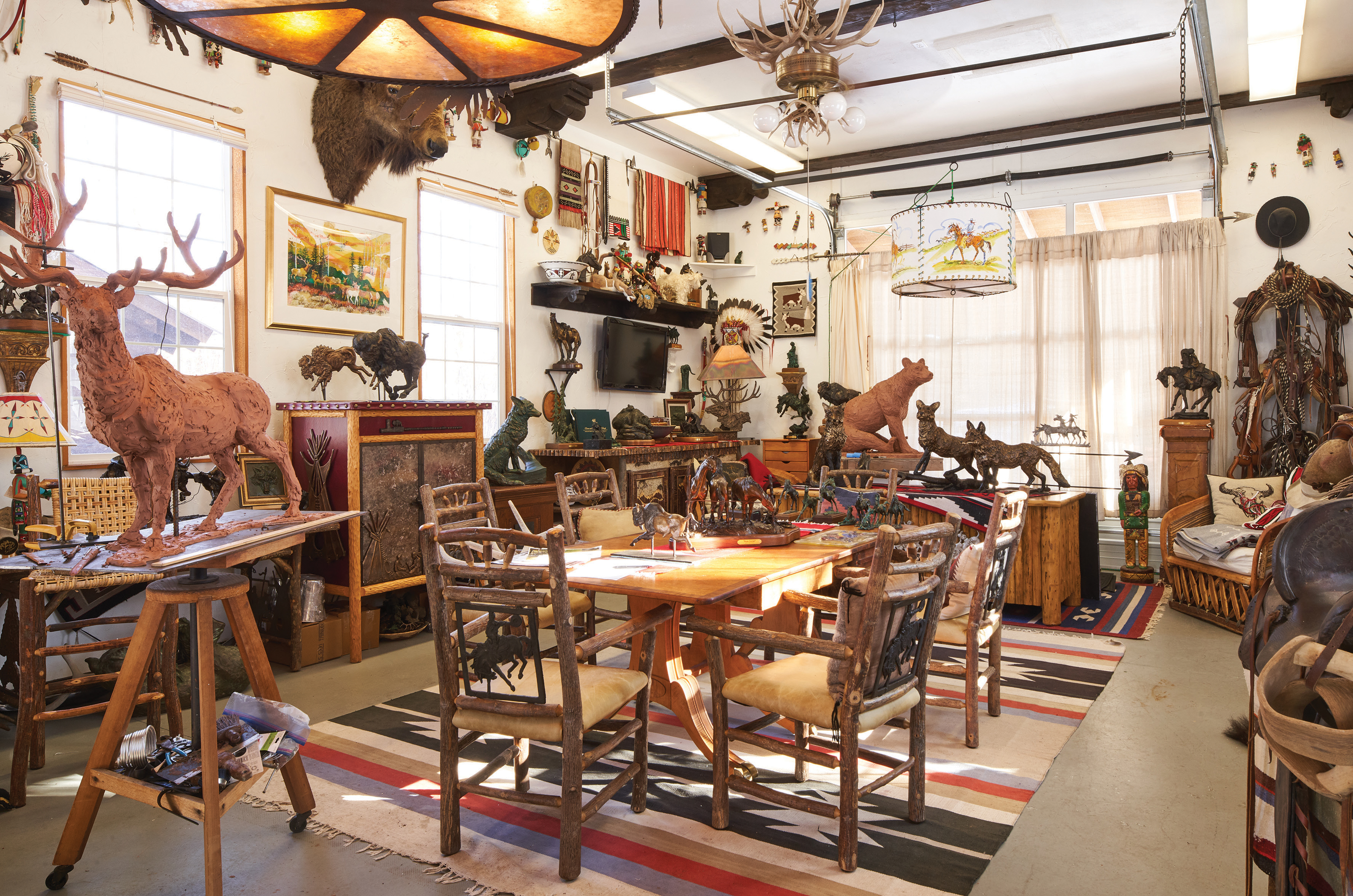 The high-ceilinged studio (with garage doors at one end to facilitate moving his large pieces) is filled with art, antiques, and collectibles used as props. The chairs, double-sided bronze castings inspired by the Old Hickory Furniture Company, are from Mortensen’s furniture line, The Rainbow Trail Collection.

A lifelong artist, Mortensen received bachelor’s degrees in economics and fine art from the University of Utah in 1971, then he embarked on
successful careers in advertising and banking. He purchased land in Wyoming, but for a time it was merely a place where he could escape with his late wife, Pam, whom he had met while working on the iconic R Lazy S Ranch in Jackson Hole. Pam might have been even more firmly rooted in the area than Mortensen, having grown up in a traditional Wyoming dude ranching family. And after graduating from college, the couple worked together on the historic White Grass Ranch, one of the earliest in Jackson Hole, homesteaded in 1913. 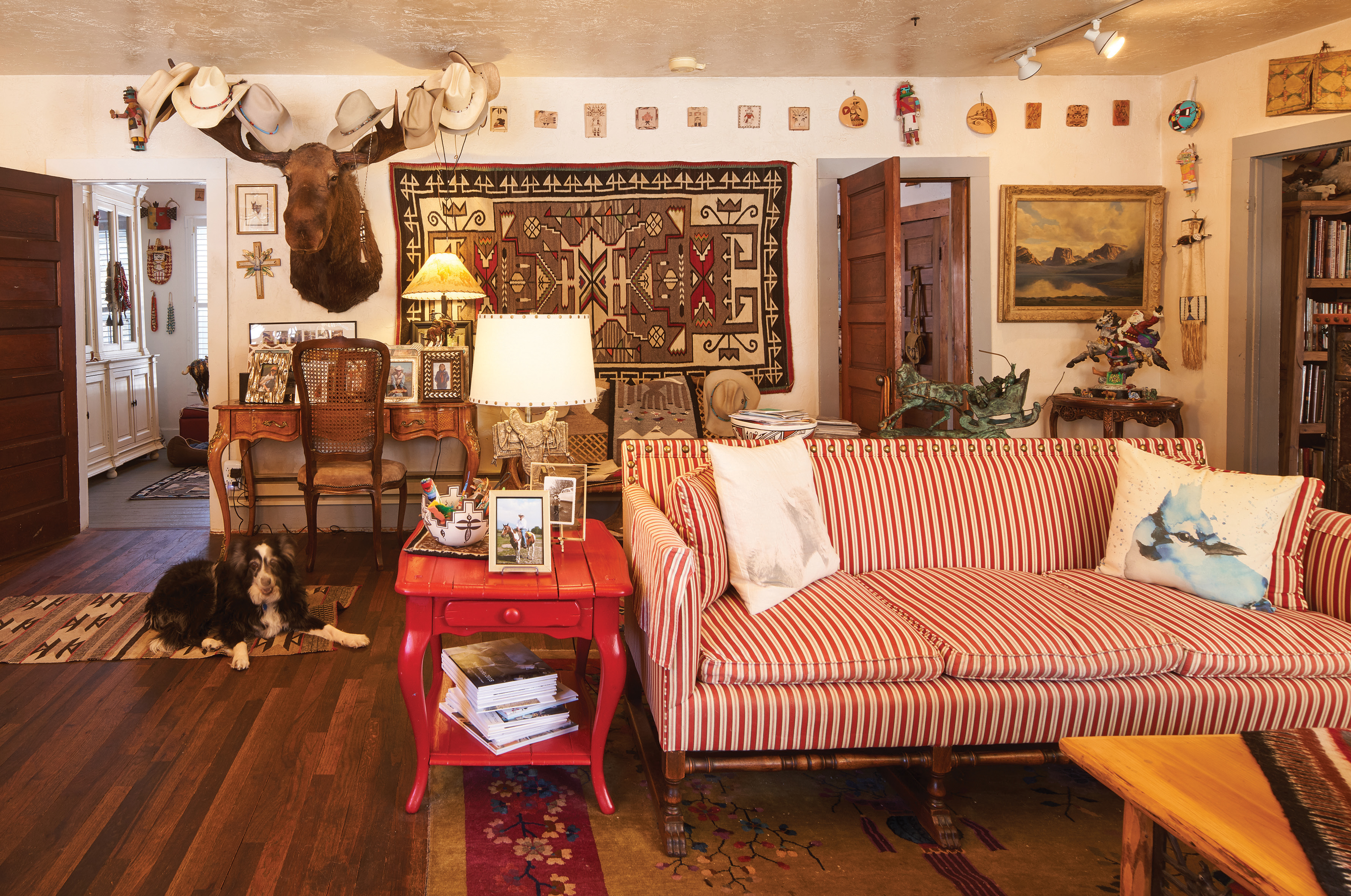 The living room is filled with items collected during Mortensen’s long marriage to his late wife, Pam, who came from a dude ranching family. They met during college while working on the R Lazy S Ranch in Jackson Hole. After graduating, they worked together on the iconic White Grass Ranch in what is now Grand Teton National Park.

They bought their current home in 1988. “It was in terrible condition; we redid everything,” Mortensen recalls, adding that they intended to live in it as he made the transition to being a full-time artist. Sited close to a curve in the banks of Fish Creek, today the one-story white frame house is not just a home, but also a repository for the couple’s shared lifetime of collecting. Western paintings, Mortensen’s sculpture, kachinas, fetishes, and Pueblo pottery cover the walls and shelves. Southwestern necklaces hang as art from hooks on walls. Books fill shelves in the hallway and the small library. In the living room, wildlife mounts overlook a cozy scene furnished with ranch-style furniture, while dogs trot back and forth across Navajo rugs or curl up by the fire in front of a 1930s antler couch. The rooms are imbued with a patina of age and authenticity. 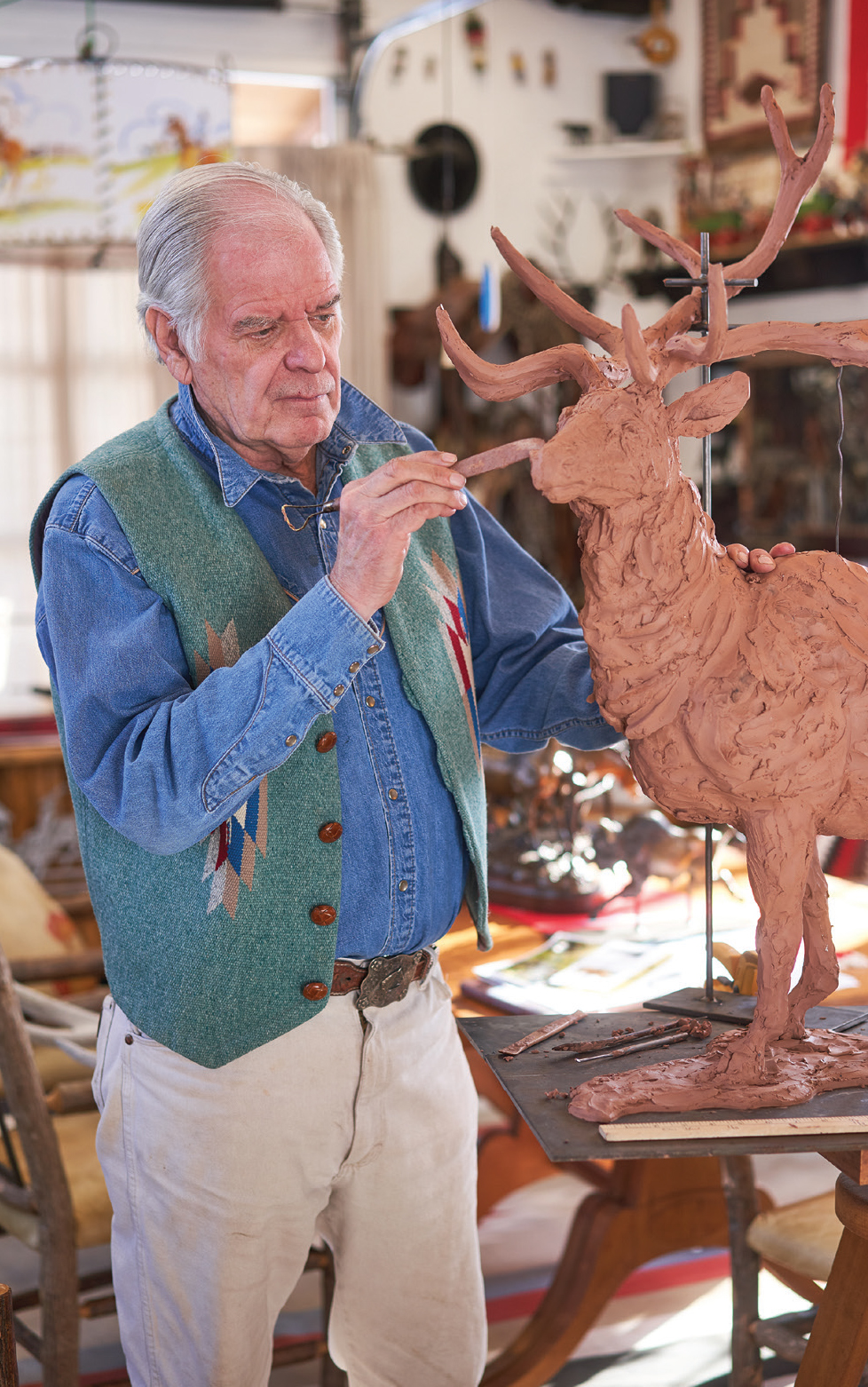 The artist works every day but engages in different media to suit his mood.

Not long after they purchased the house, the couple had the opportunity to acquire a 1927 guest cabin built for the historic GP Bar Ranch, a ranch in the Wind River Mountains owned by Mortensen’s wife’s family. The cabin was moved to the property as a guest house. The stacked-log, metal-roofed building is furnished in a traditional cowboy-style: pole beds, a half-log bedside table, rustic shelves, vintage books, skulls, bones, and wildlife mounts. A monument to the history of his late wife’s family, the cabin serves as a repository for generations of memories and ranching traditions. 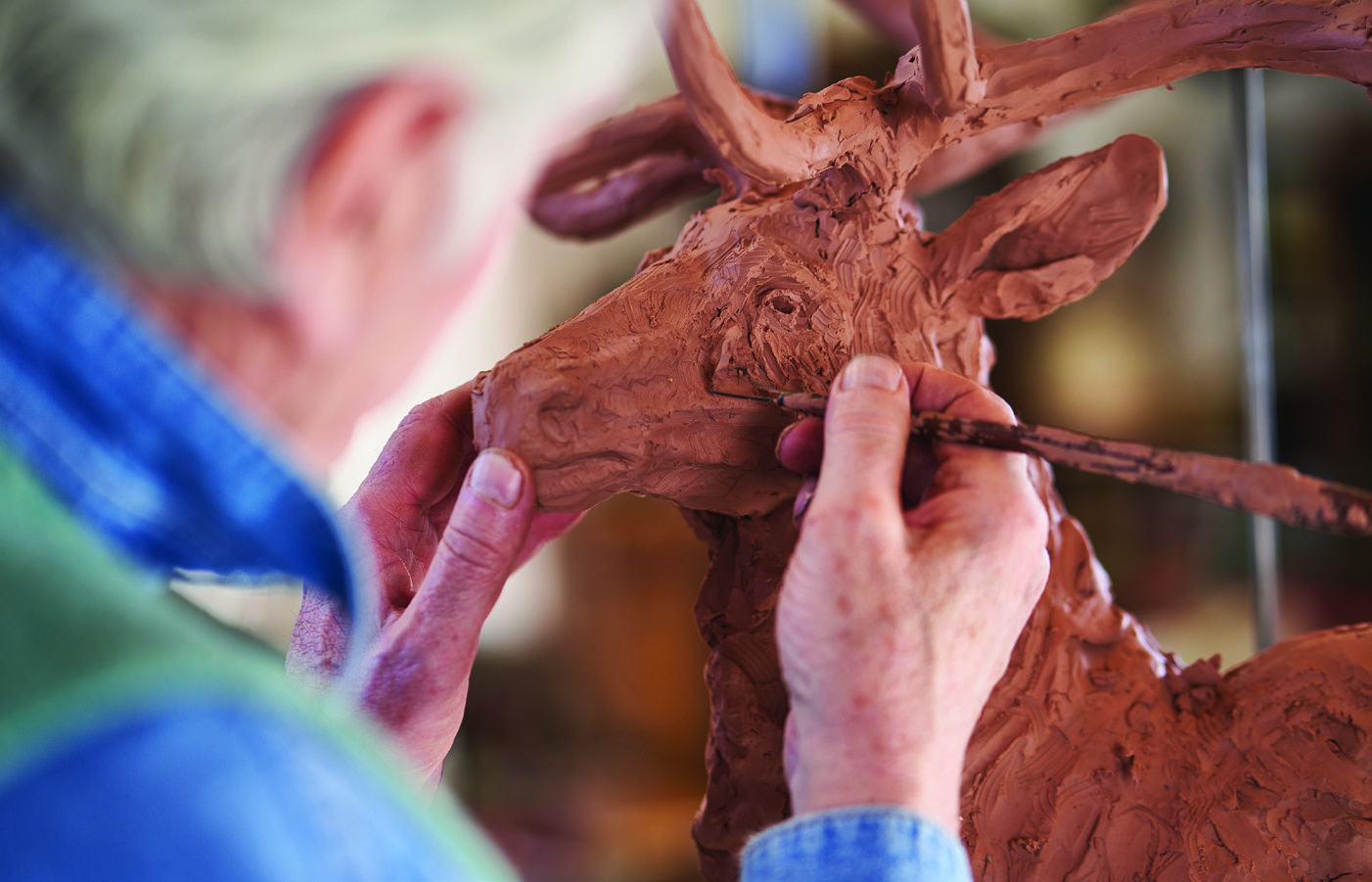 Commissions from a wide range of collectors, museums, and municipalities have resulted in more than 30 life-sized outdoor works.

From the beginning, Mortensen has had a thriving career as a sculptor; he made pieces that found homes with corporations and private collectors alike, received commissions from universities, and exhibited work in galleries and museums throughout the West and Southwest. In 1991, he started producing furniture that incorporated his cast-bronze art pieces. The Rainbow Trail Collection includes items such as chandeliers with cast moose antlers; table lamps featuring trout; elk-motif exterior lighting; fireplace mantle castings of deer in a forest; a coffee table inset with large cast arrowheads; a chandelier depicting an American Indian village with teepees; and desks, chairs, cabinets, and bedroom furniture that play on cowboy, wildlife, and Native American iconography. These pieces are now in museums, hotels, ranches, and private homes throughout the country. 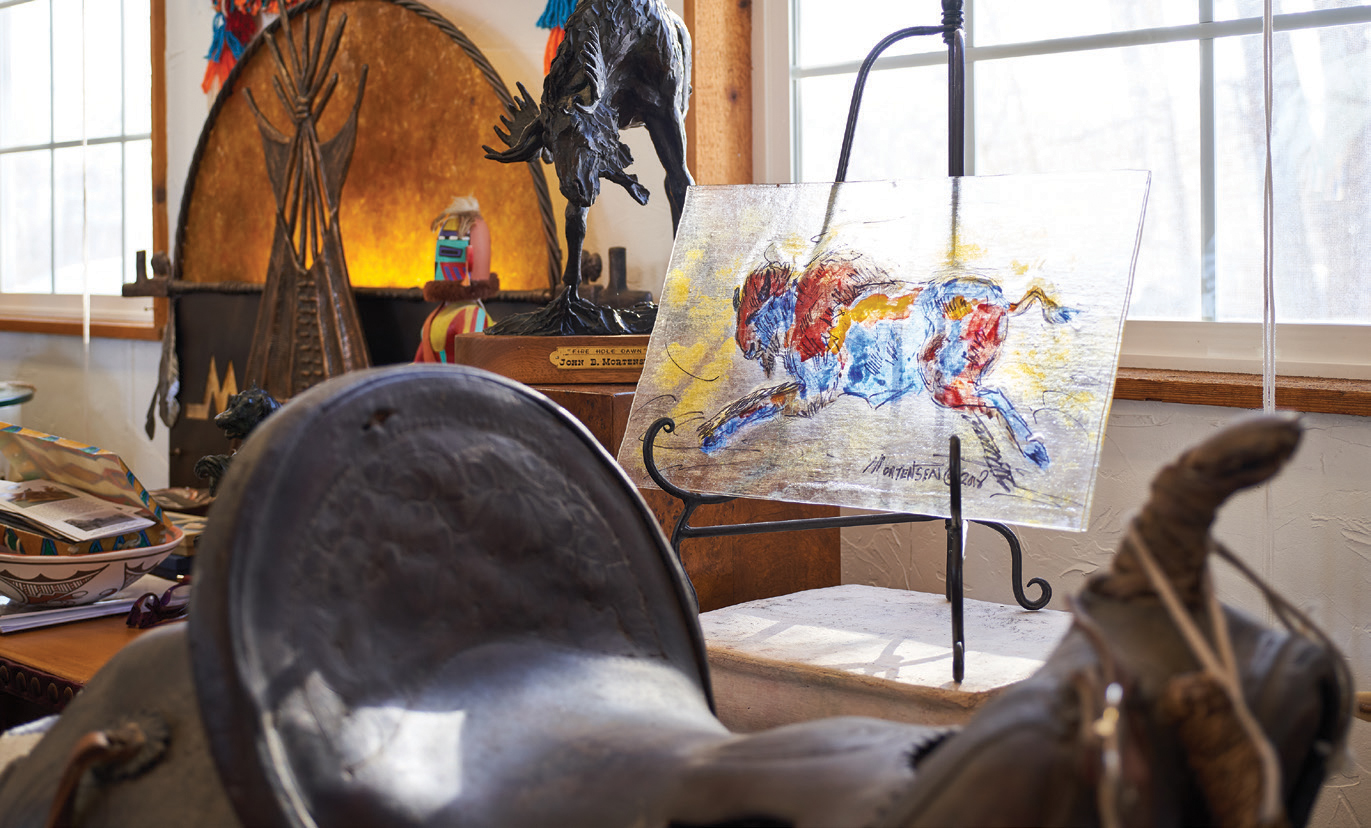 The artist uses vintage props — such as this circa 1885 saddle made in Wyoming territory — to convey authenticity in his art. Lately, he’s been experimenting with painted glass pieces.

Mortensen could work anywhere and often did, but by 2000, the time had come to build a designated space, one large enough to create life-sized wildlife and ranch themed bronzes. “Part of what propelled me to build the studio,” recalls the artist, “was that I got a commission for three life-sized moose for the University of Utah’s Red Butte Garden. I’d just completed a [large work] and had to stay at the Metal Arts Foundry, in Lehi, Utah, for a week. I thought it would be better to do the sculpture here. Since then,” he adds, “I’ve done over 30 life-sized outdoor pieces in the studio, so it was a great decision.” 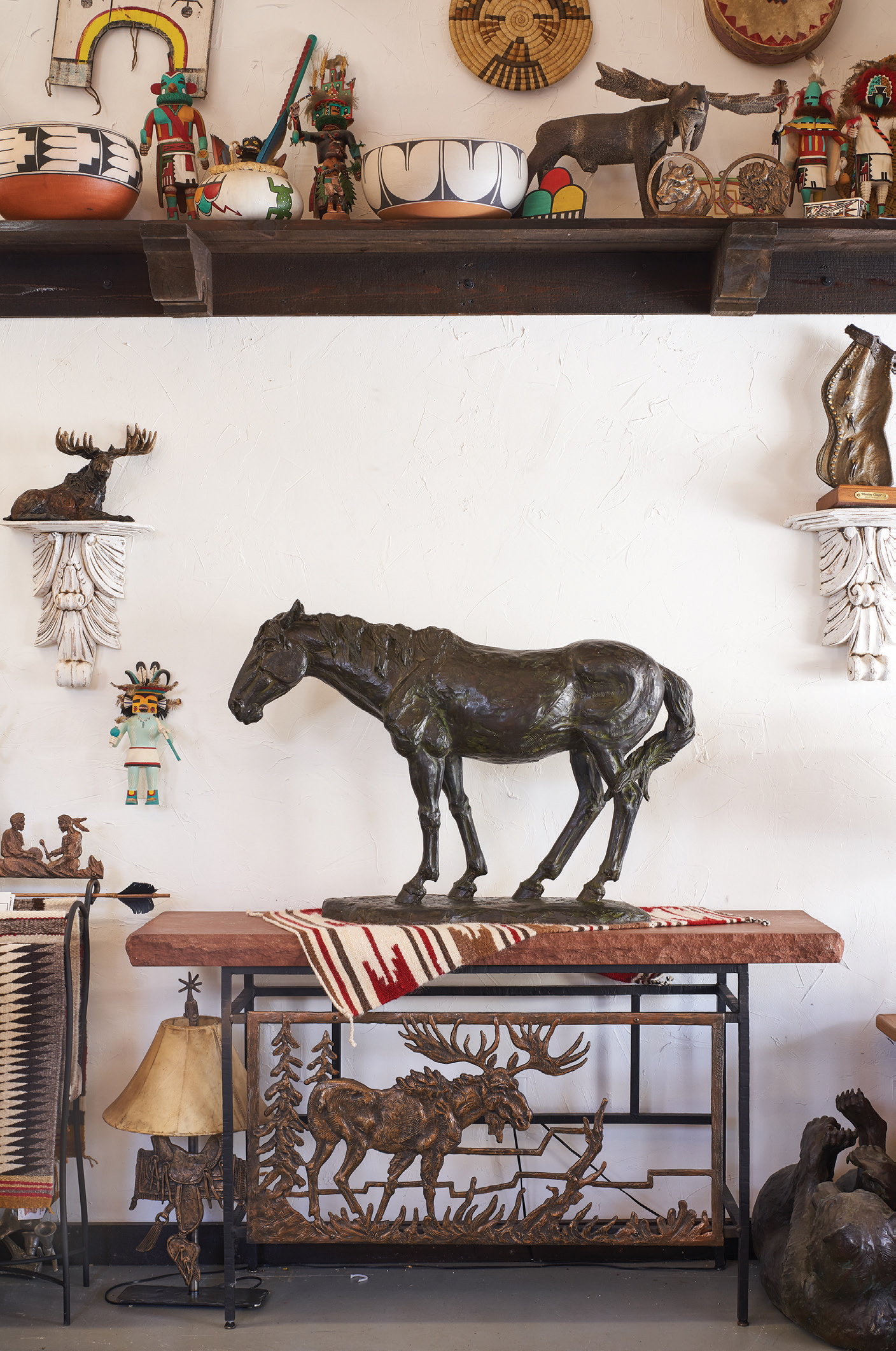 The couple went on annual buying trips in the Southwest, resulting in a spectacular collection of Native American art, particularly pots, kachinas, and textiles. Mortensen’s equine sculpture, Shoshone, rests atop a moose table from his furniture collection.

Mortensen designed the studio as one roomy high-ceilinged space with a glass garage-style door at its far end. “It’s very simple,” he says. “I wanted it to feel like you were outdoors, but still had protection. It has lots of windows and is all glass on the south end. And the entrance facing the road makes it easy to transport art.”

Inside, a large dining table and chairs provide a place to spread out papers or sit and drink coffee with clients or visitors. There are multiple workspaces, antiques, more wildlife mounts, collectible tack and saddles used as props in his artwork, a large wood-burning stove, and plenty of natural light.

Fish Creek is prime habitat for moose, deer, elk, and a variety of fauna. It’s not uncommon for Mortensen to have to look twice to distinguish the artworks, such as this bronze coyote, from live wildlife.

The artist is as prolific as ever with his bronze work but is always exploring in new directions, as with his recent foray into producing colorful fused glass pieces. “I’m always experimenting,” he says. “I was actually trying to cast glass, but the bison I was making broke. But that’s what’s fun, don’t you think?”

Mortensen and Pam had maintained a tradition of going on annual buying trips, usually to the Four Corners region, until her death in 2016. Recently, he has given a lot of thought to their collections, ever since he started working with the Natural History Museum of Utah to catalog and preserve it. He was astounded to be told the collection amounted to more than 1,000 pieces — not including jewelry. “One of the anthropologists said that our Native American collection is a great reflection of the cultural landscape of the Southwest.” Upon contemplation, he adds, “I realized our other collections and our lifestyle in Wyoming reflect the cultural landscape of the West we have celebrated and lived in.”