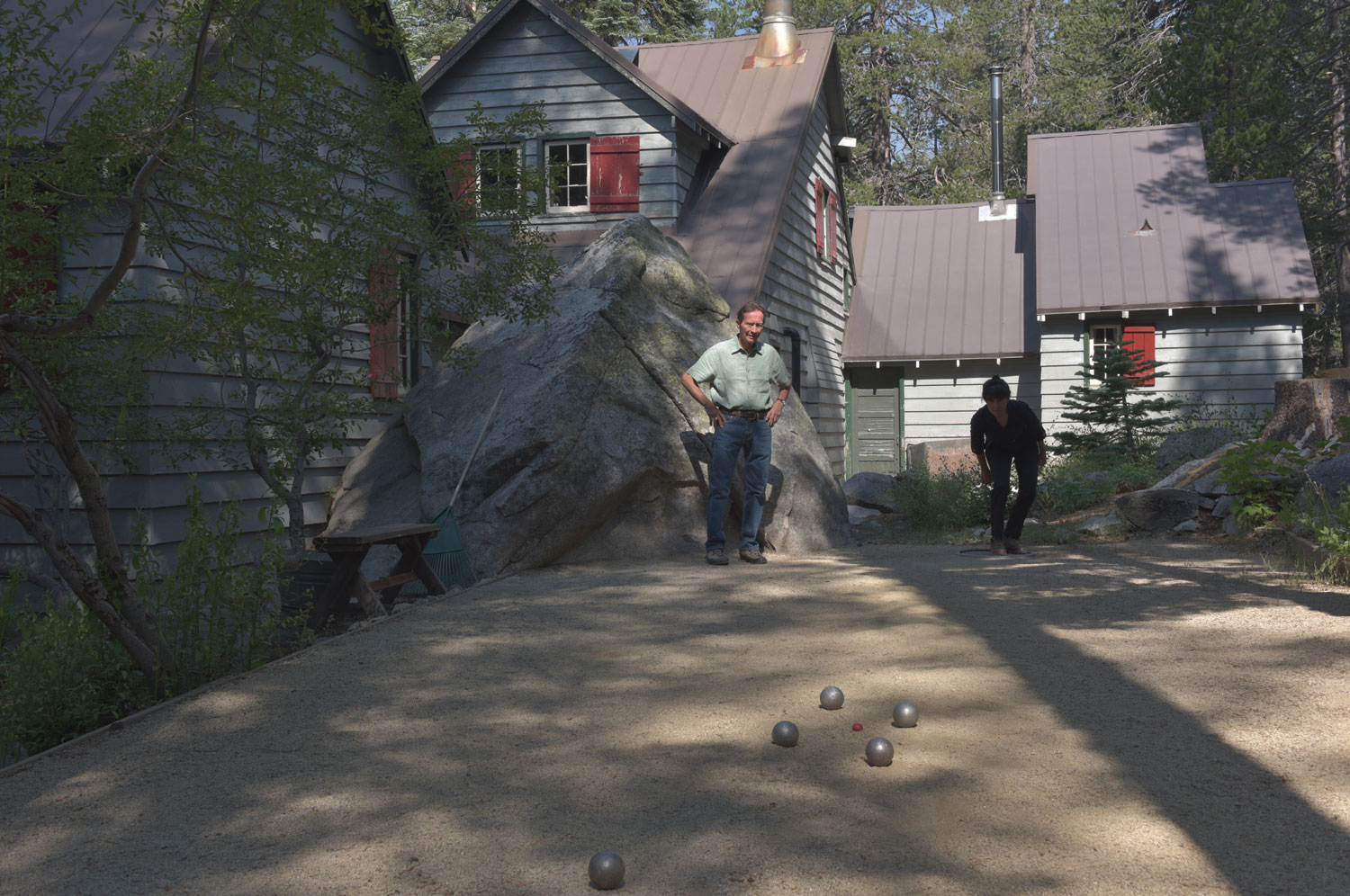 On a sunny day in the Sierras, the couple enjoys the Petanque court located at the back of their house and studio.

08 May In the Studio: Recreating the Magic of the Natural World

When artist Paul Kos was commissioned to create a sculpture for the Poetry Sculpture Garden in the SoMa neighborhood in his adopted hometown of San Francisco, he knew precisely where to retreat for inspiration. Collaborating with Robert Hass, former poet laureate of the U.S., the two took off to Kos’ cabin on Donner Pass in the Sierra Mountains. “We decided to make an alpine garden,” Kos recalls. “[Hass] wrote a poem that I installed on a 20-foot-high by 125-foot-long wall. And I brought down, from the High Sierras, an 84-ton boulder and made it the icon of the courtyard.” 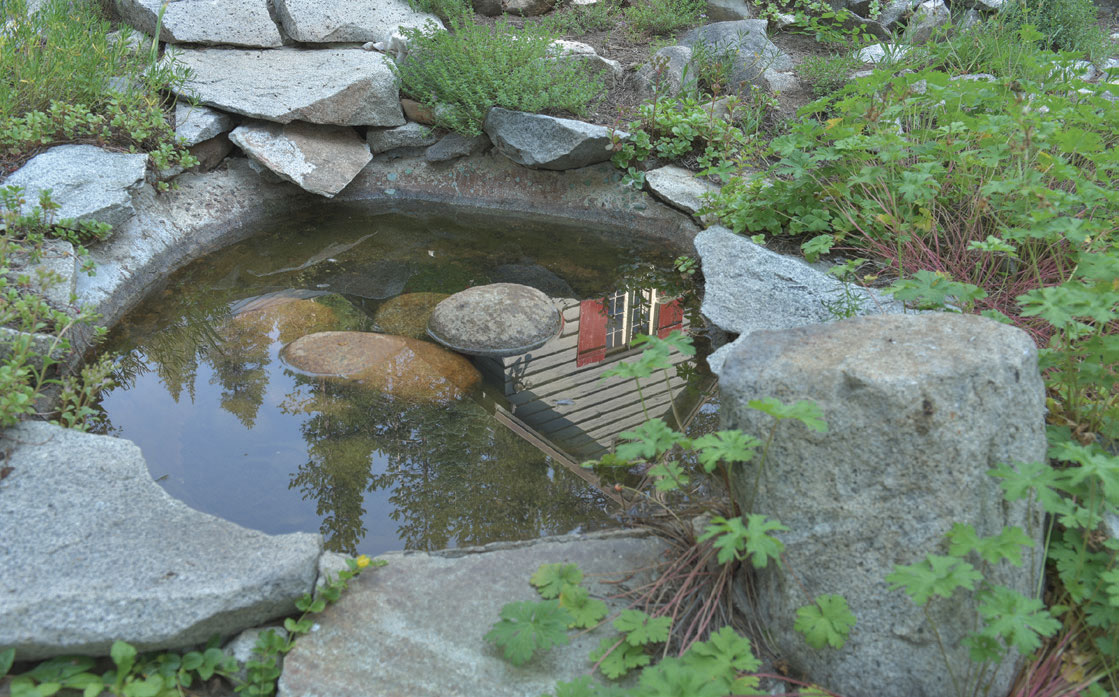 The house is reflected in the garden pond. 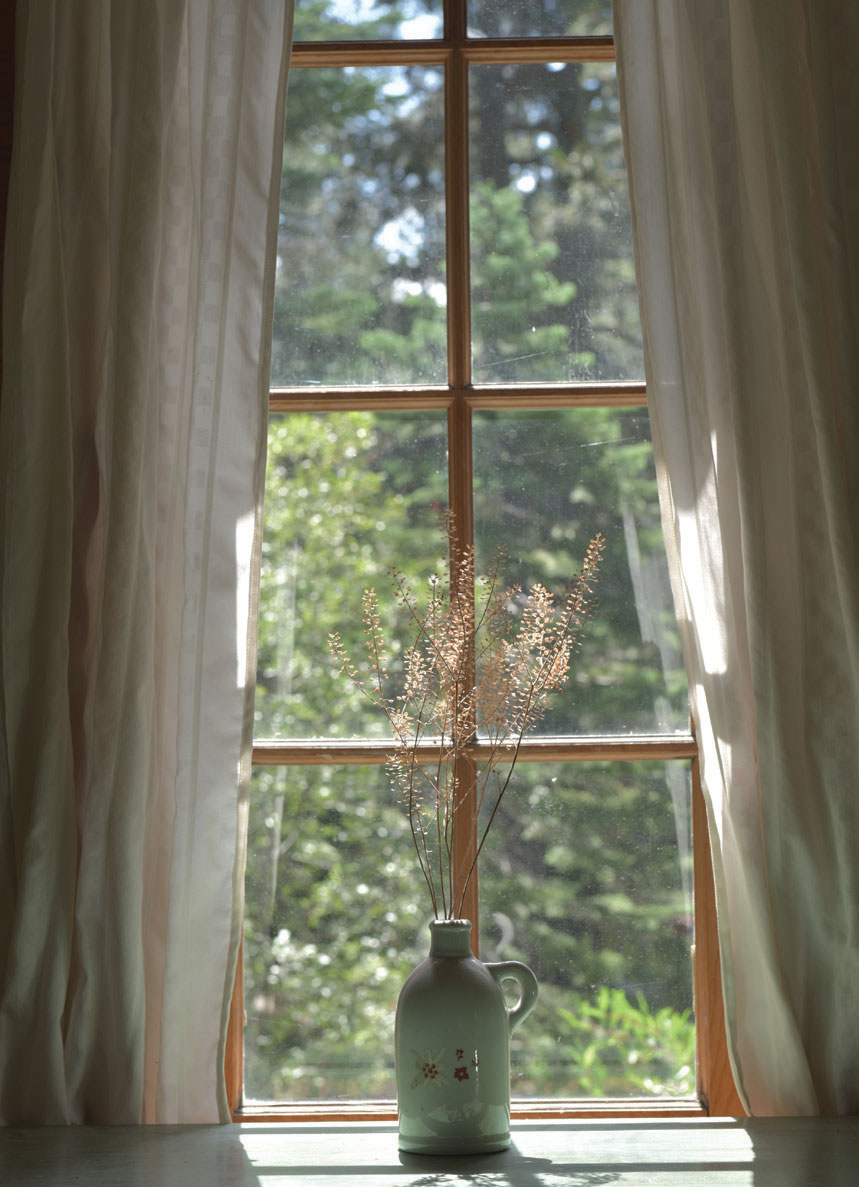 The bedroom window faces forested views to the east. 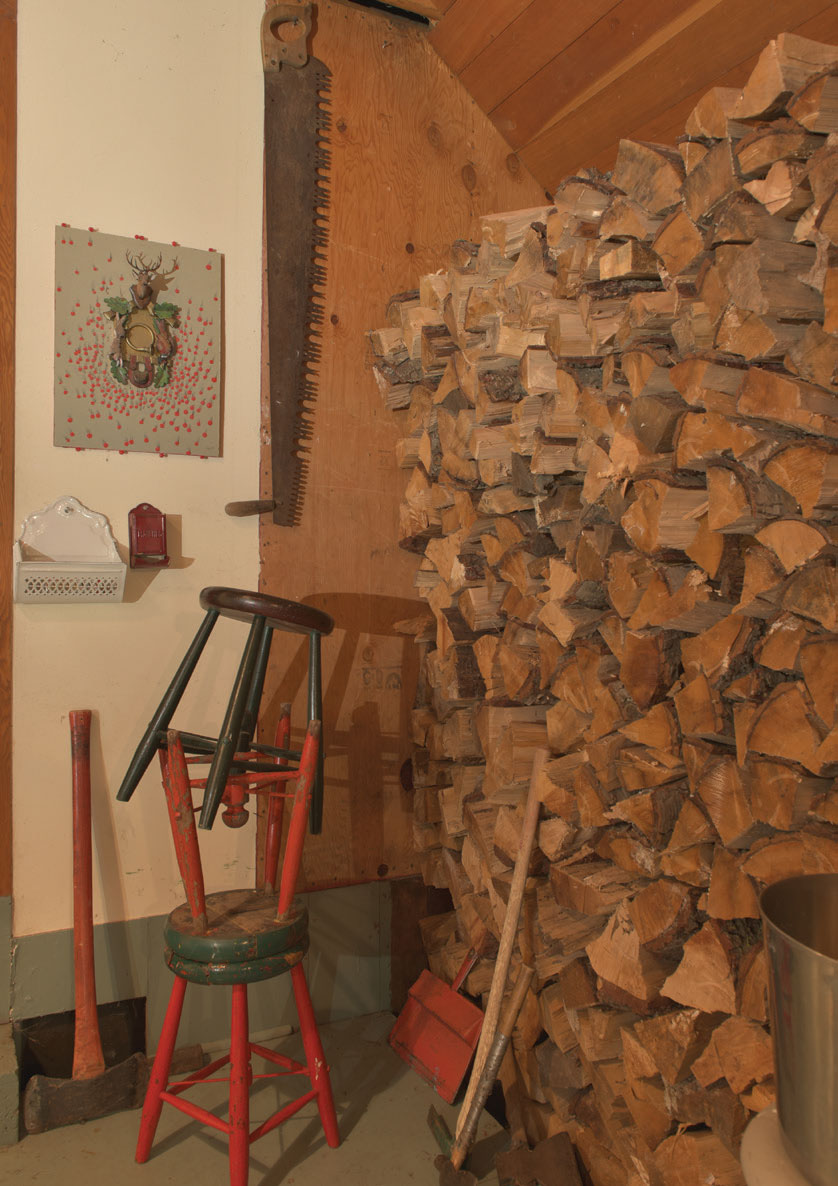 Firewood, to warm their home and studio, sits near found objects that Paul Kos has accumulated since the 1970s. Eventually, they will appear in his art installa- tions.

Lugging that boulder down from the woods surrounding his cabin was no small task. A crew had to break it into four parts, truck it to the city, and then glue it back together in the plaza at 199 Fremont Street, where it stands as a tribute to the natural world that lies beyond. It’s that natural world that Kos and his wife, painter Isabelle Sorrell, use to inspire just about every project they create, many of which end up in urban venues around the world.

Kos, known for his role as one of the founders of California’s influential 1960s conceptual art movement, has, over the years, created interactive pieces that meld film, sound, and natural materials. His work has been exhibited globally, and he’s completed a variety of public sculptures in the Bay Area. 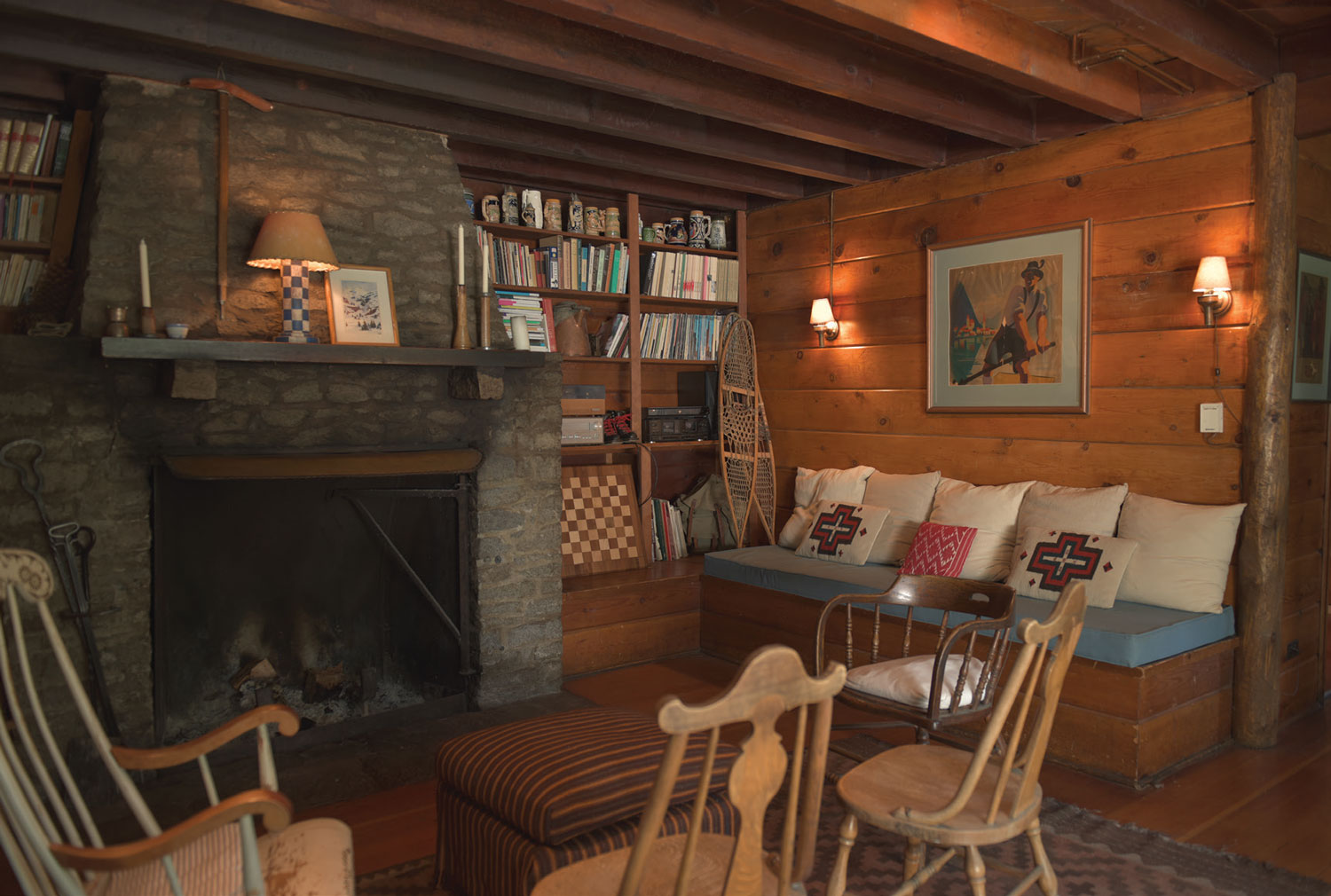 The living room features a fireplace made of local granite and original Tyrolean posters from the 1930s when the house was built. 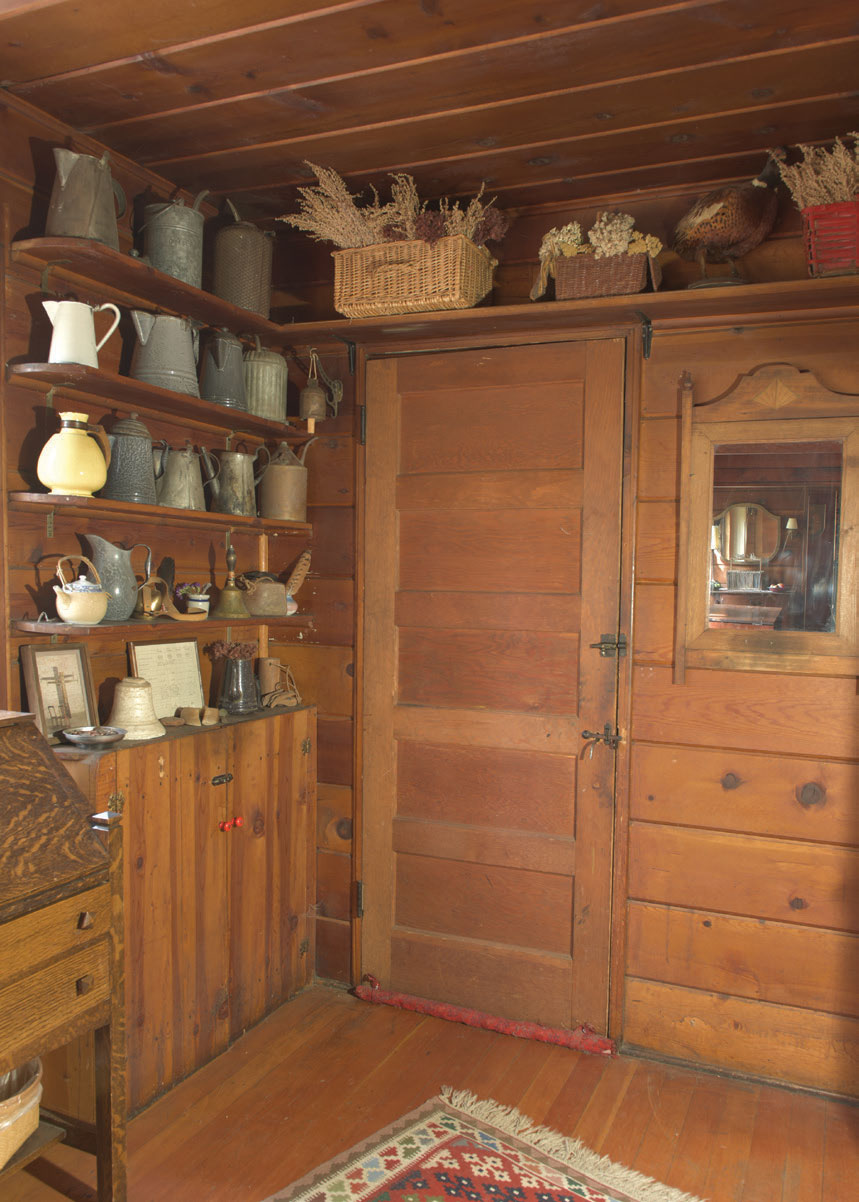 The dining room, with the original table and benches built in the 1930s, is where the couple shares many meals with friends and family. A common dinner theme? “Gratitude is present with a thought of the Donner Party and its members who did not make it over the pass,” Kos says. 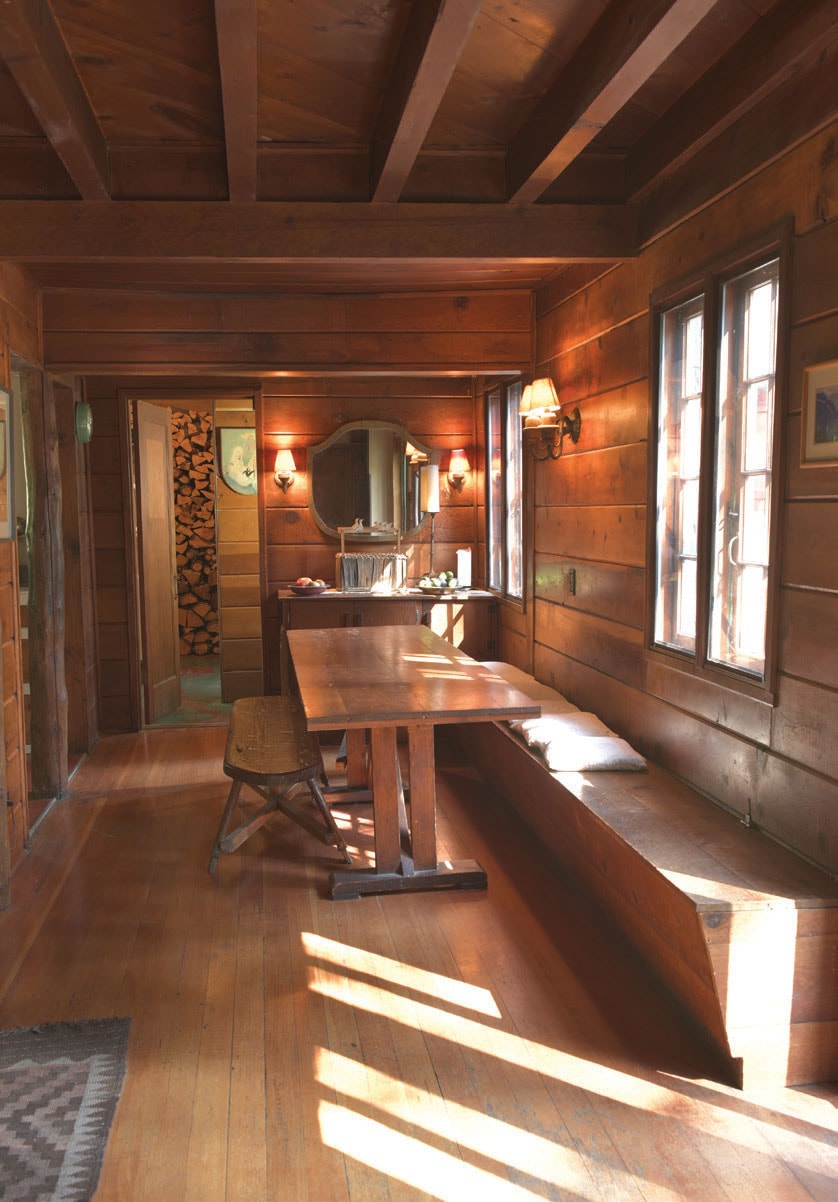 A collection of American Pioneer coffee pitchers line shelves at the home’s entrance.

As a painter, Sorrell’s art is either very small or very large in scale. Working in extremes, she focuses almost exclusively on the natural world. “I started working with gardens, and from that, I went into the wilderness,” she says. “I find that’s where our priorities should be, because our wilderness is disappearing, and we need to really be aware of the magic that exists in our world.”

While rock climbing near their cabin in Soda Springs, California, population 97, Sorrell fell in love with a meadow on Donner Summit. “We get to it by going through sheer granite,” she says. “There’s almost no vegetation. And then, all of a sudden, there’s this tiny meadow. It’s like paradise and cannot be seen from down below. It’s really magical.” She created a 6-by-8-foot painting of the scene in what they refer to as their “mountain studio.” 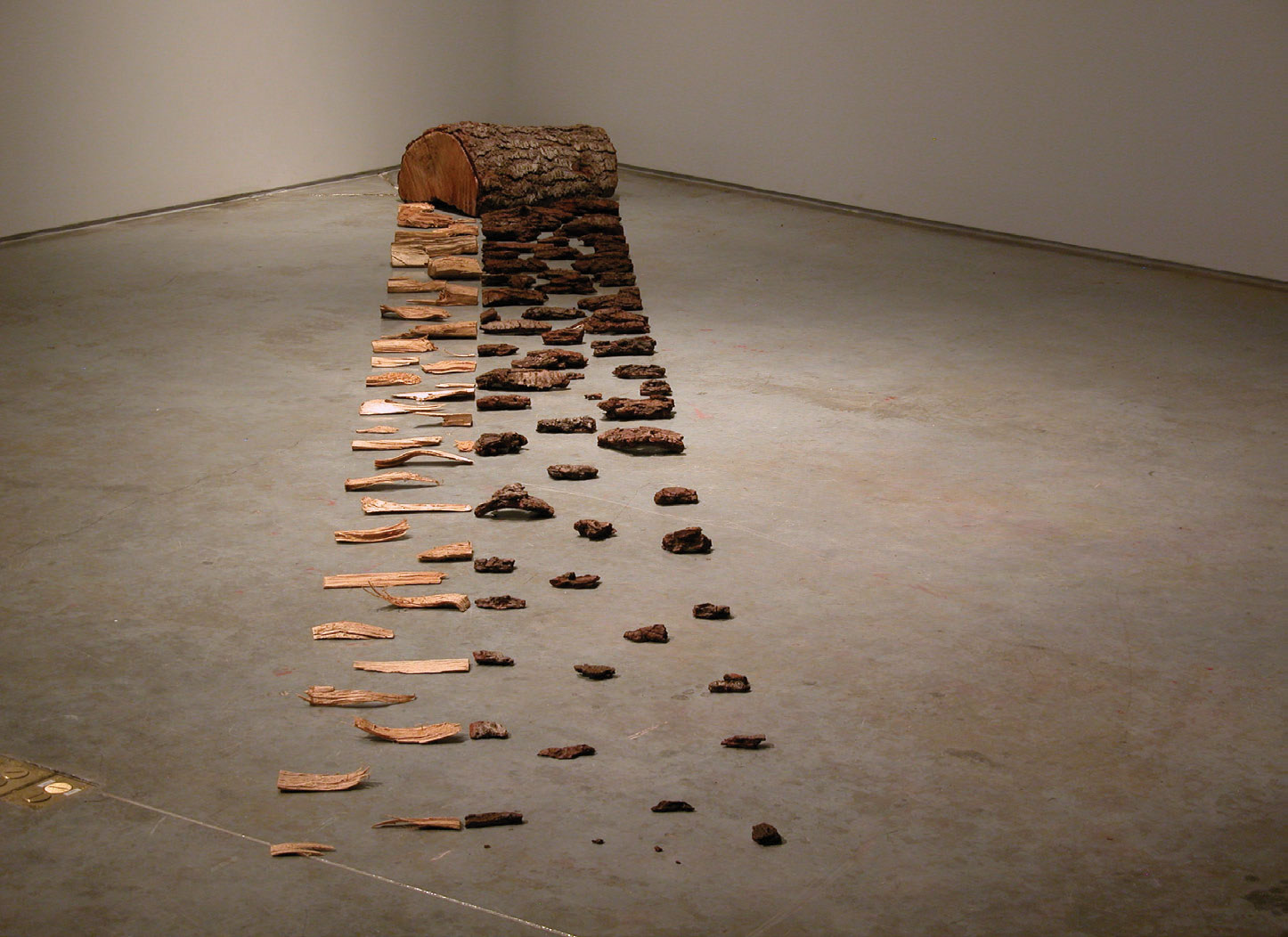 Kos’ sculpture Brushstrokes (after Monet) 1998 is made from red fir bark and wood. It’s designed to reflect the log as if the floor were water and was installed at diRosa Center for Contemporary Art in Napa, California. Photo: Paul Kos 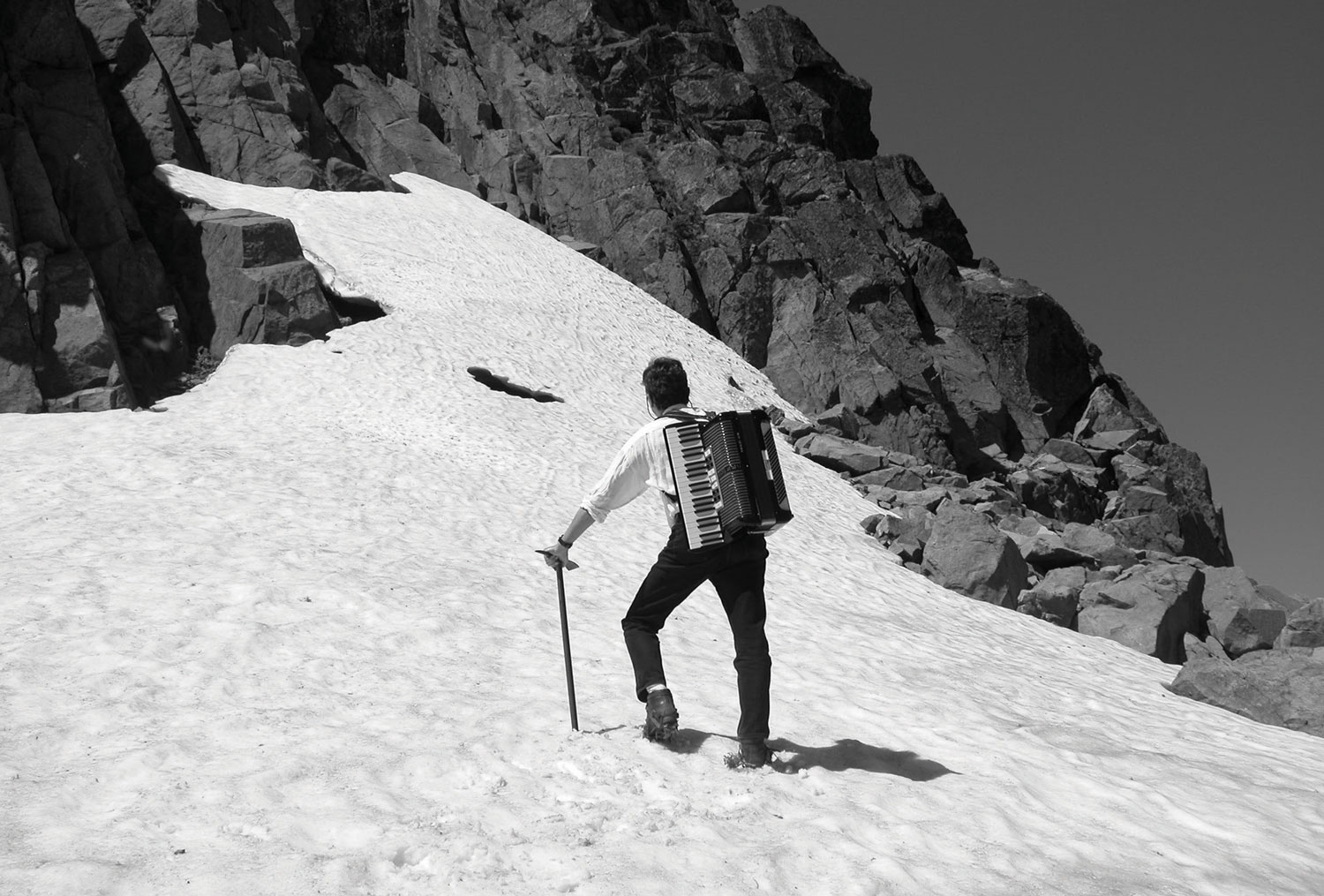 Kos, with his accordion and ice axe on the slope of Donner Peak, is filmed for the video and photo titled I Can’t Get it Right No Matter Where I go (A Duet in Light and Dark) 2005. Photo: Isabelle Sorrell 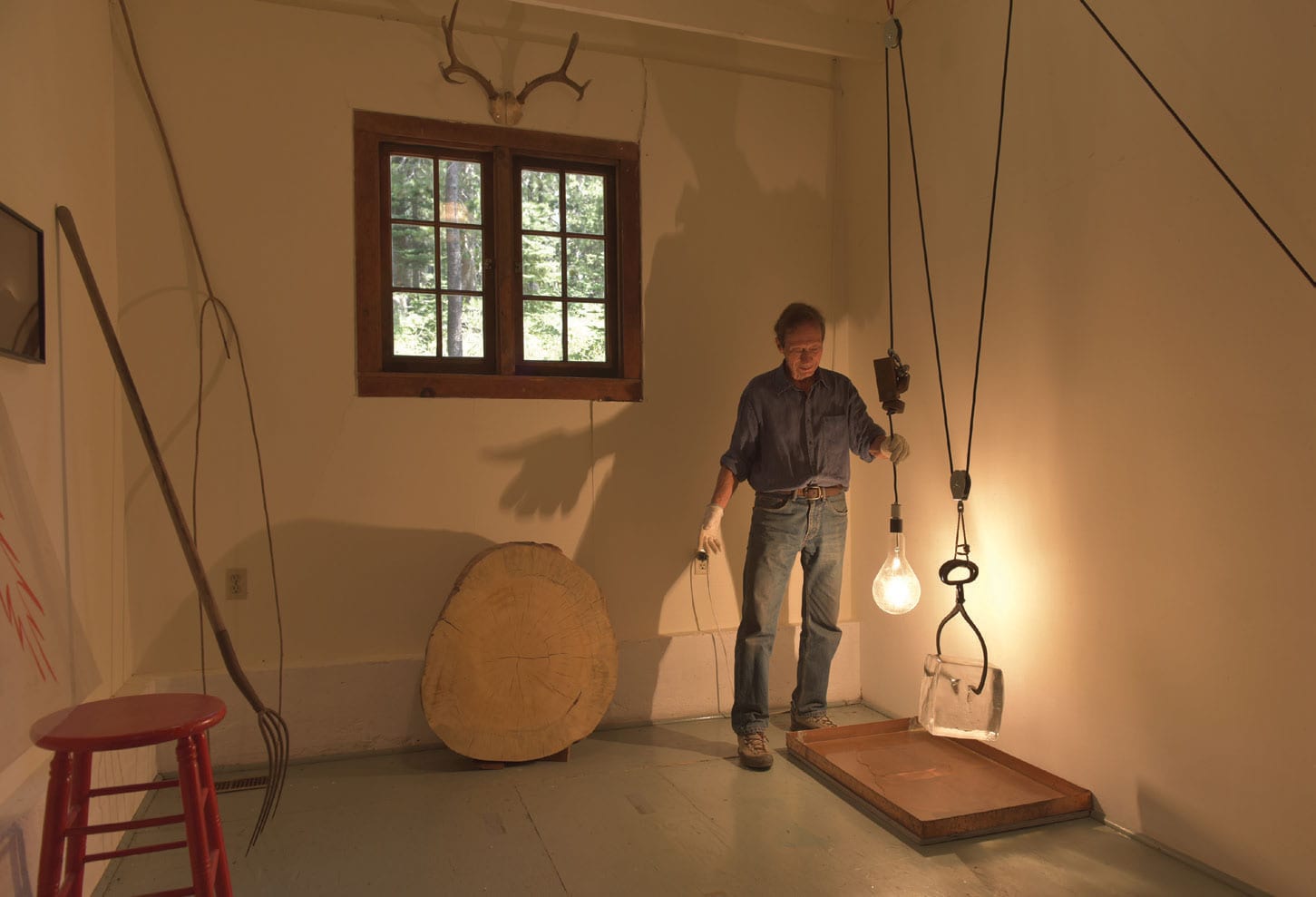 In the studio, Kos works on his piece, No Ice, No Fire, which he first made in 2008 during his tenure as the Dodd Chair at the University of Georgia

Although the couple also has a home-based studio in the heart of San Francisco, their mountain studio is where they generate ideas. Built in 1934 by a San Francisco-based doctor, the retreat at 7,000 feet was designed to remind him of his previous home in Austria. Kos, who grew up in Wyoming, bought the cabin in 1978, and he appreciated that he could experience the wilderness as he had during his childhood but still be close to the city.

The couple spends time at the mountain studio throughout the year, although, at that elevation and just 3 miles from ski areas at Donner Summit and

Lake Tahoe, they experience large amounts of snow during the winter, which can make access challenging at times. 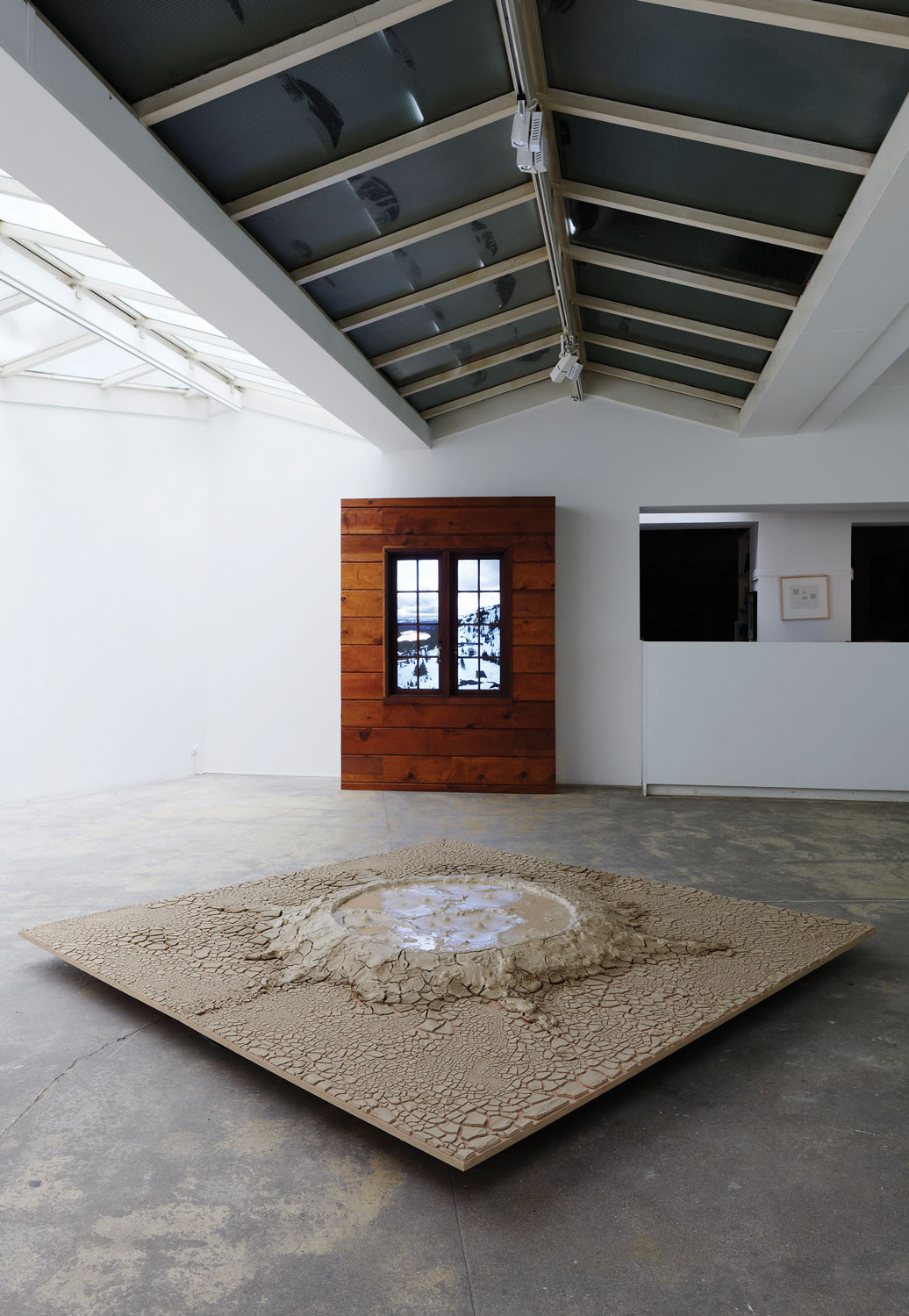 In the background is Kos’ installation Donner Pass (After Bierstadt for David Kos) 2016, that features a wooden wall and window that was taken from his Soda Springs house. A 75-inch flatscreen plays a video of the sun rising over Donner Lake. In the foreground is Condensation of Yellowstone Park Into 64 Square Feet (1969-2016), a depiction of bubbling clay and sulphur that’s 8 by 8 feet. Both works were installed at Galerie Georges- Philippe & Nathalie Vallois in Paris in 2018. Photo: Paul Kos

A typical day for the artists involves morning chores, cleaning up the landscape around the cabin, doing administrative work as it pertains to their careers, and perhaps some gardening. After lunch, an outdoor excursion of some kind is imminent: rock climbing, hiking, or cross-country skiing, depending on the season. Then, it’s into the studio until dinner. “If we have time, and we don’t have visitors, we usually go back to the studio again after dinner,” Sorrell says. “We don’t have a television; we don’t even find time to watch a movie. We’re really in another environment there.”

The studio is in what they call the “West Wing” of the cabin, which consists of two rooms and a large corridor where they store wood for the fireplace. In here, they tend to work around each other, although much of Kos’ creativity is conducted outdoors. “I can do a lot of work on the deck or just outside dirty work,” Kos says. “The studio is more for drawing and painting, and looking at work.” A recent example is a piece he made from a tree that was cut down due to beetle infestation. He created a video that documented the tree falling and projected the scene onto a large, round log from the tree itself. 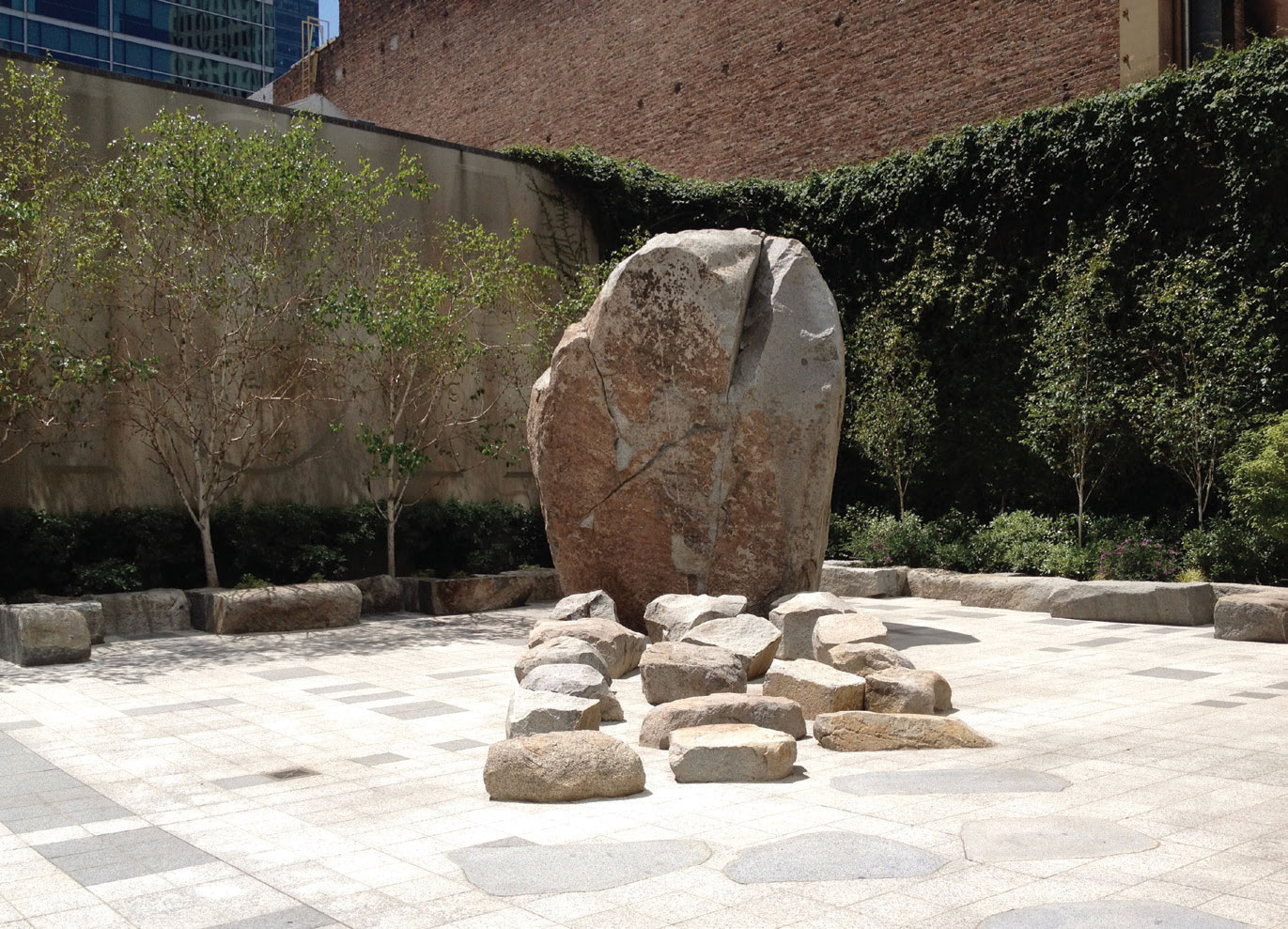 Big Bertha, created by Kos in 2000, is an 84-ton granite boulder from Soda Springs that he incorporated into a public art plaza in San Francisco. Accompanying poetry by poet laureate Robert Hass was carved on the walls. Photo: Paul Kos 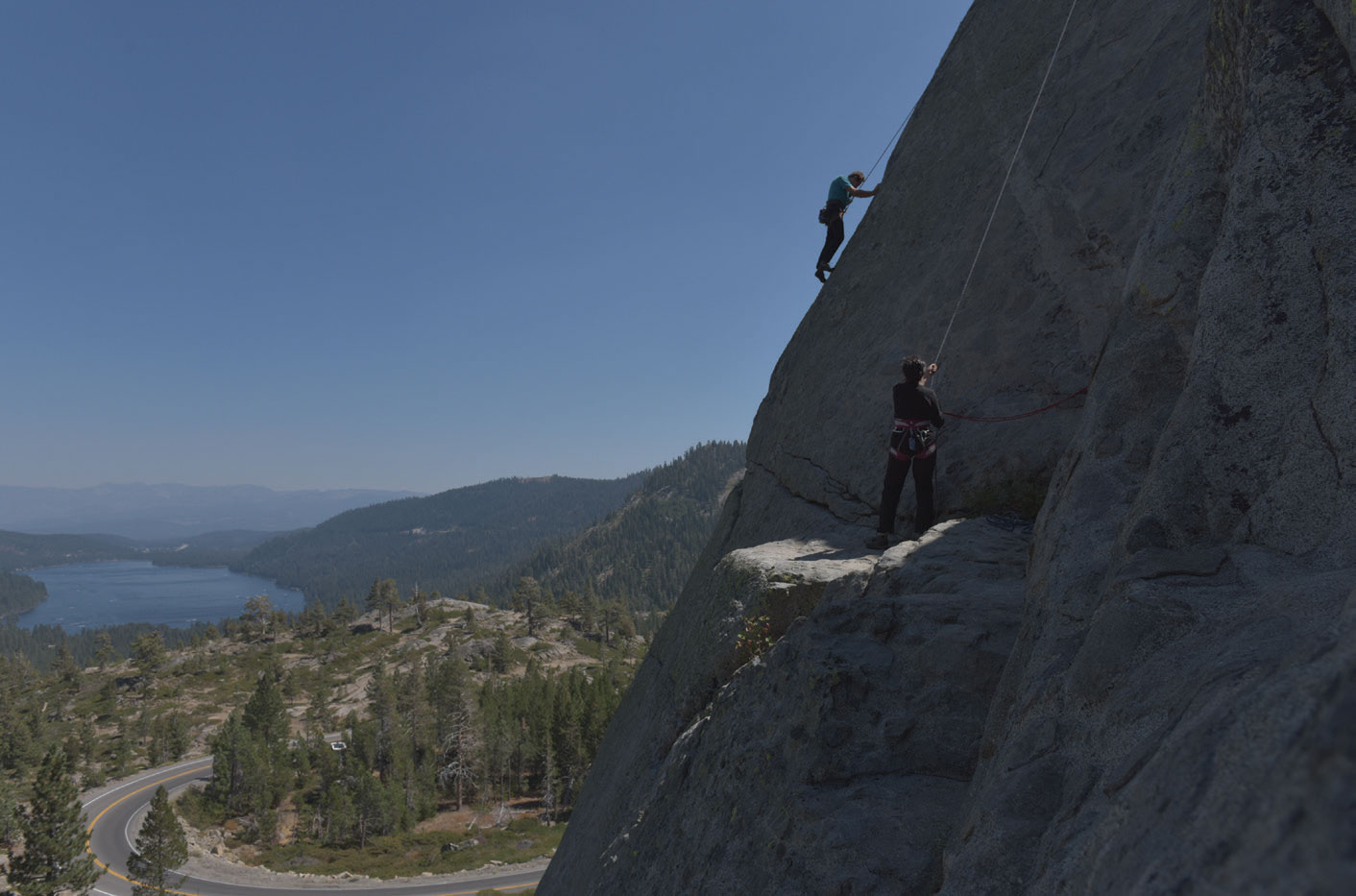 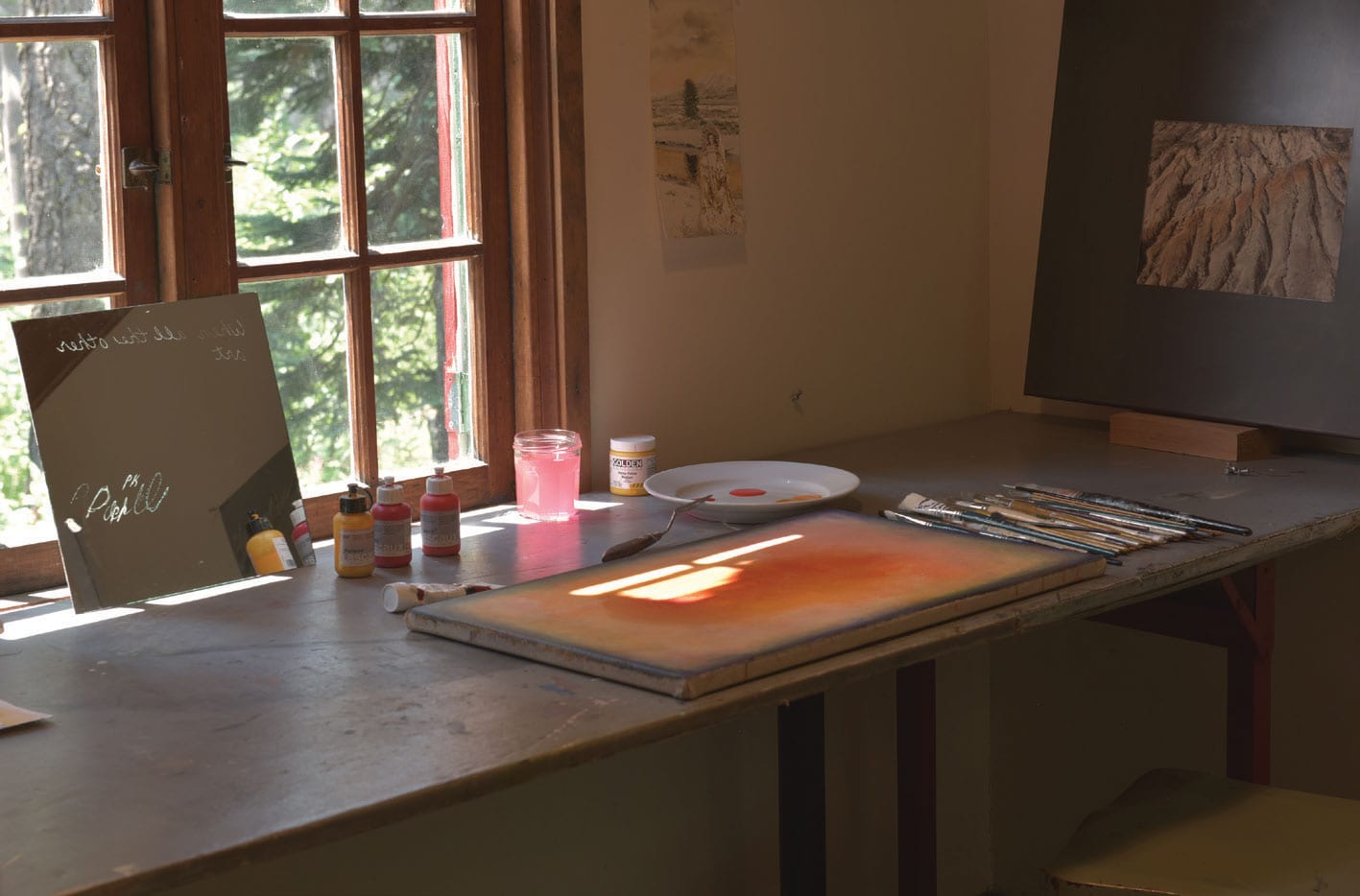 The artists share their mountain setting with wildlife, which, on occasion, wanders close to the cabin. Or too close, as was the case with a black bear that walked through the French doors and into the cabin when Sorrell was home alone. “The only other living being was Paul’s parrot,” Sorrell recalls. “I looked toward the living room, and there was the bear and the parrot looking at each other. The bear got scared of me and fled.” When Kos returned from rock climbing that day, he didn’t believe her until he looked out and saw the same bear scratching its hindside on a tree. 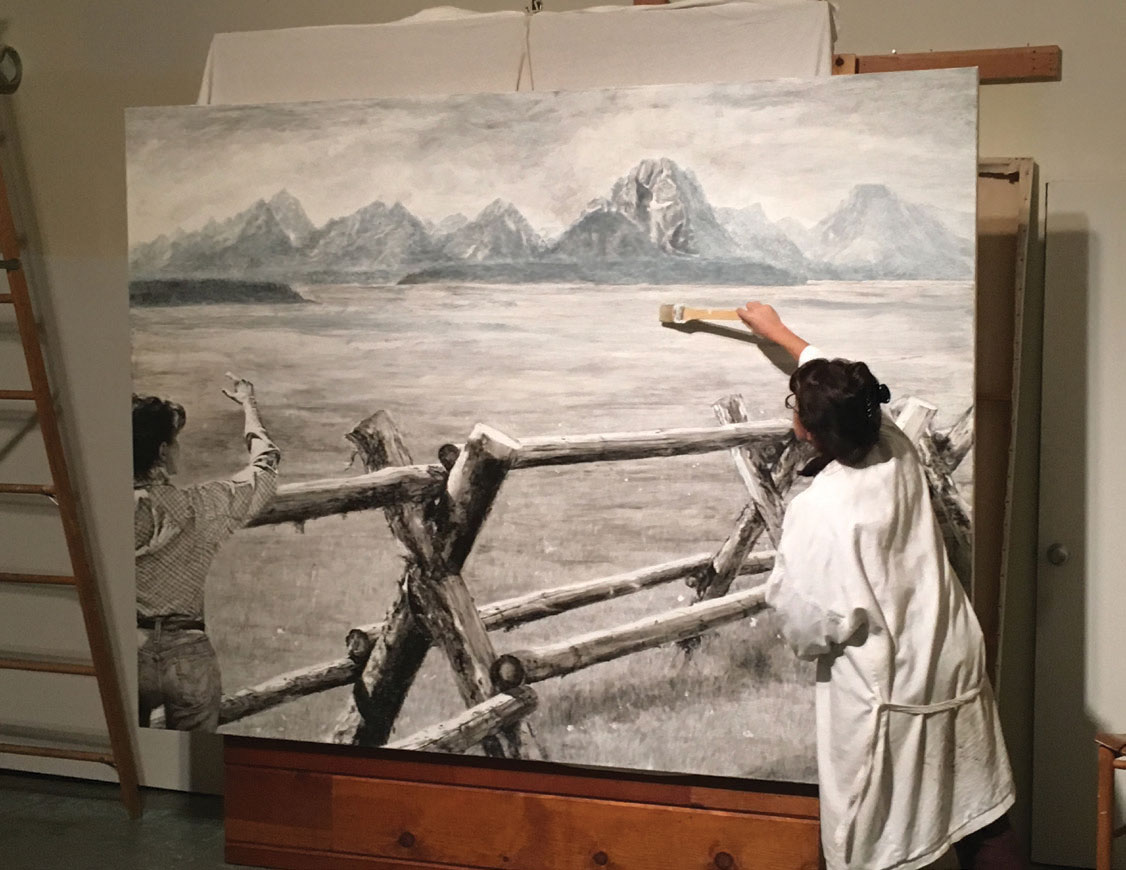 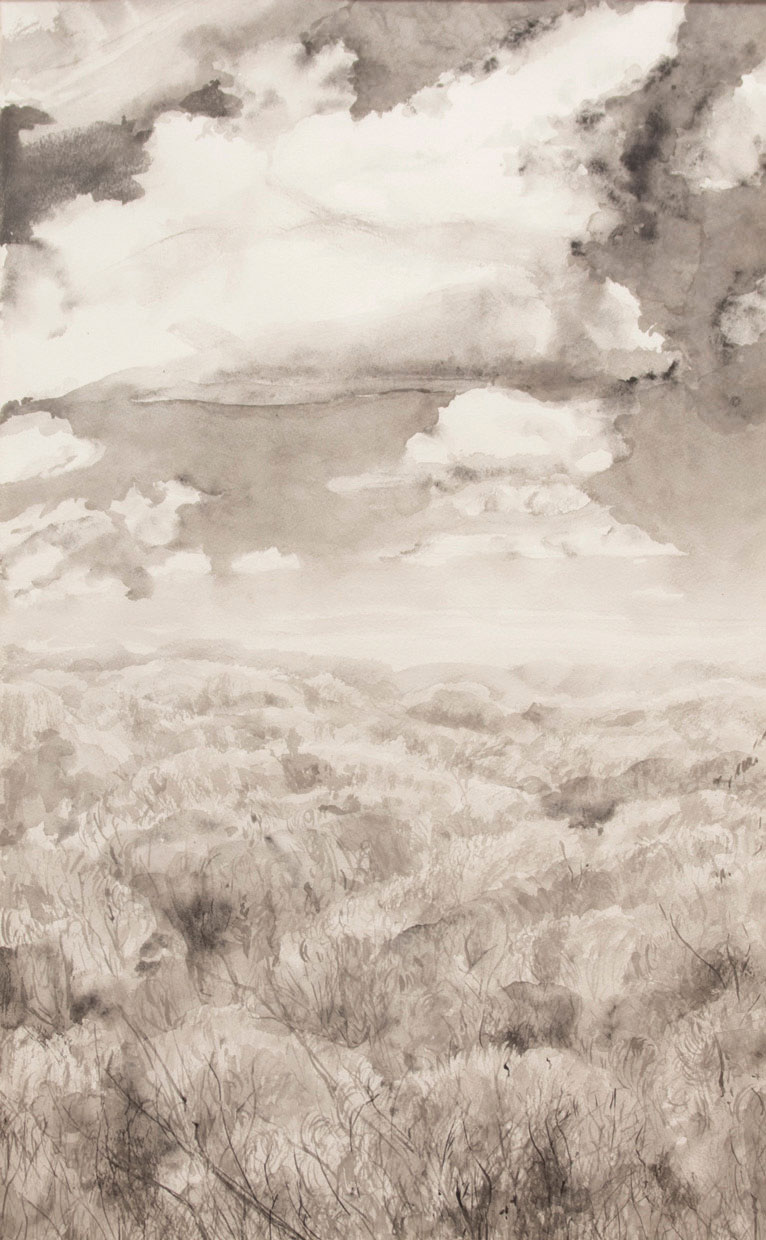 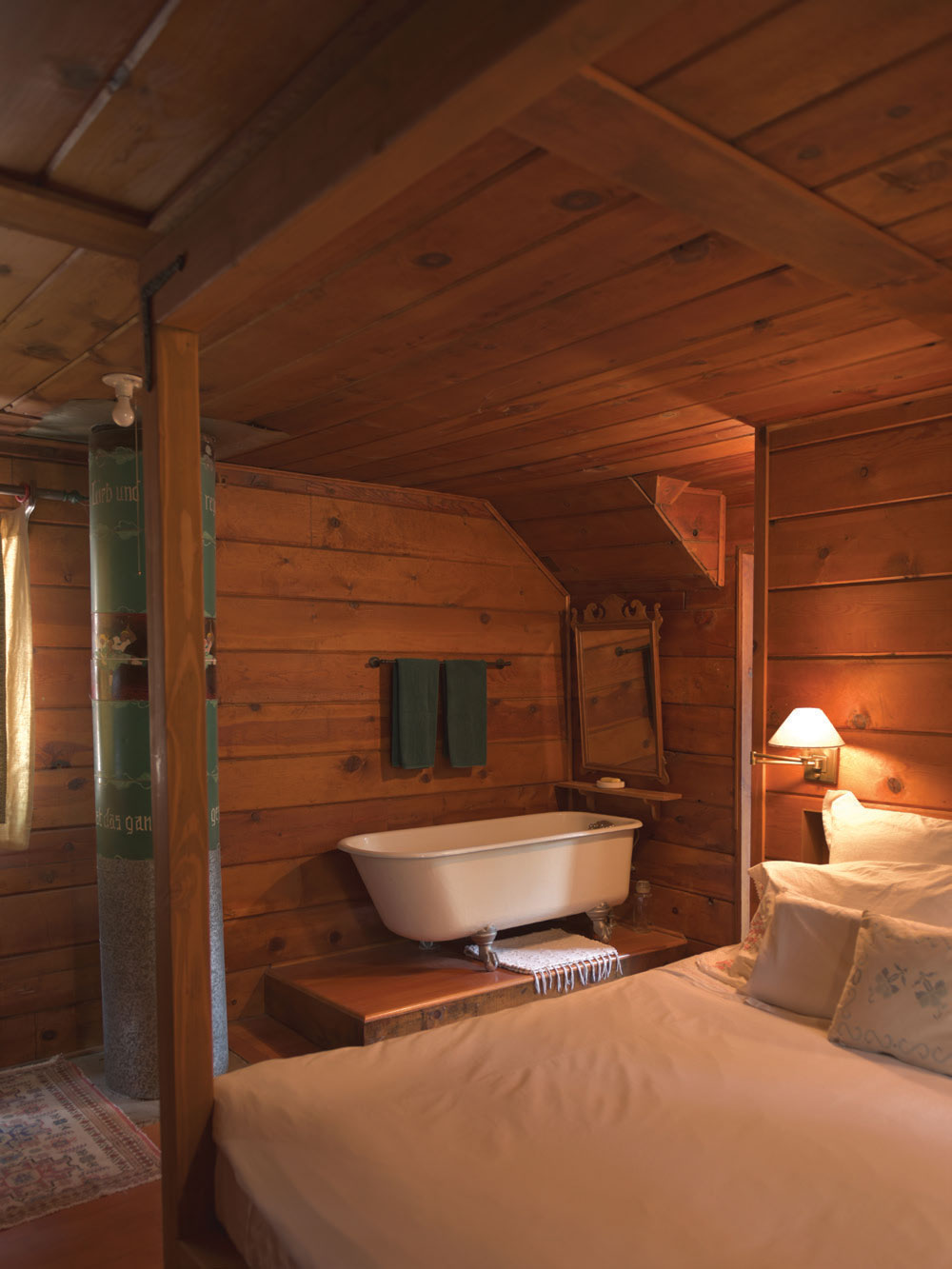 A clawfoot bathtub, like the ones that rose in popularity in the 19th century, sits in the couple’s bedroom.

It’s these experiences in the mountain wilderness, or “accidents” as Kos calls them, that spark something in their imaginations. It’s where life is as free-flowing as the natural world around them, and they are able to create and think in an undistracted fashion, coming up with ideas that are rooted in the High Sierras.

For both artists, the mountain studio inspires artwork and is also where they start planning how each will bring their concepts to fruition. Nature is part of their process as much as it’s part of their lives. Take for example an installation Kos created in the underground emergency surgery waiting room of the Zuckerberg San Francisco General Hospital. It includes five window-sized flat screens depicting aspen trees blowing in the wind, bringing an element of nature to the trauma center. 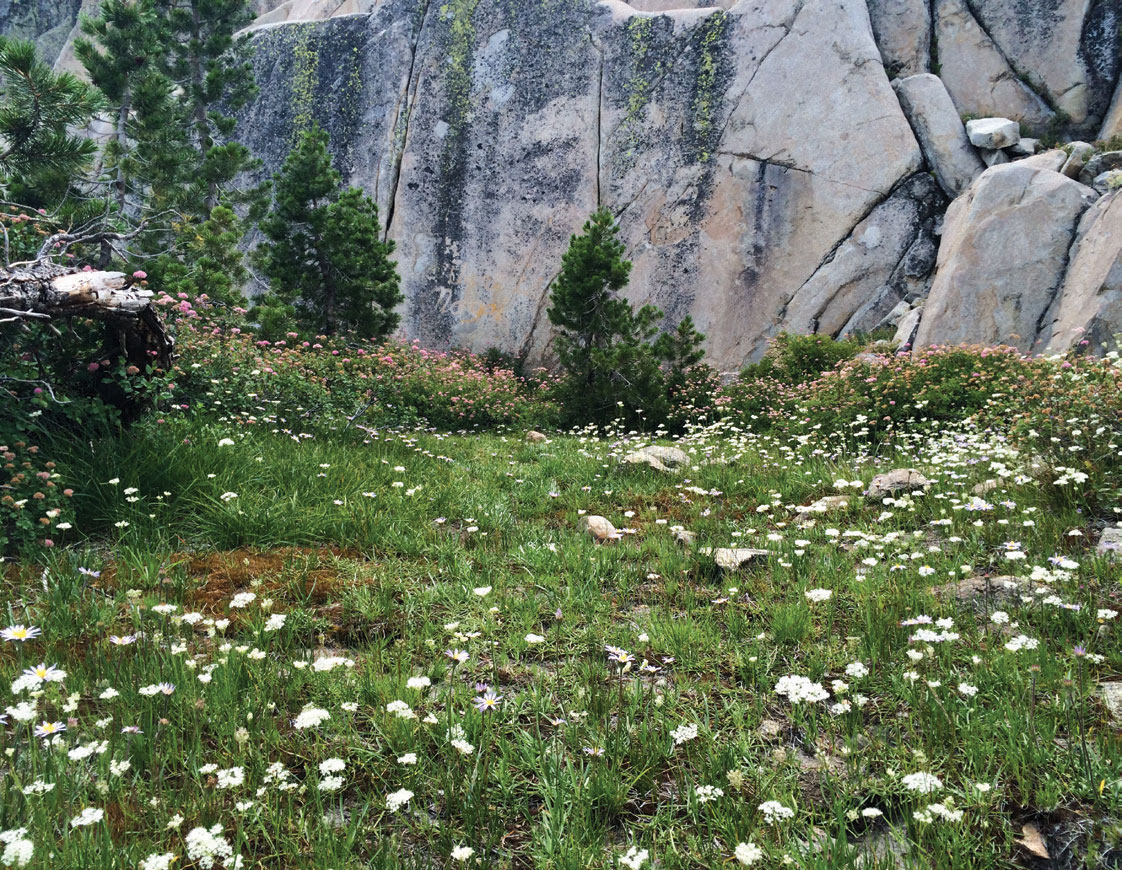 A climbing route named There is no God leads to an open meadow on Donner Pass. Photo: Isabelle Sorrell

“I don’t necessarily sit at my desk and try to contrive something,” Kos says. “Instead, I wait for the accident to teach me more than anything else. I trust accidents to inform site and circumstance and provide me with something. Everything from cutting a tree down, to too much snow, to too little snow, the big boulder that came from there … Ideas are often generated up there, but the work ends up somewhere else.” 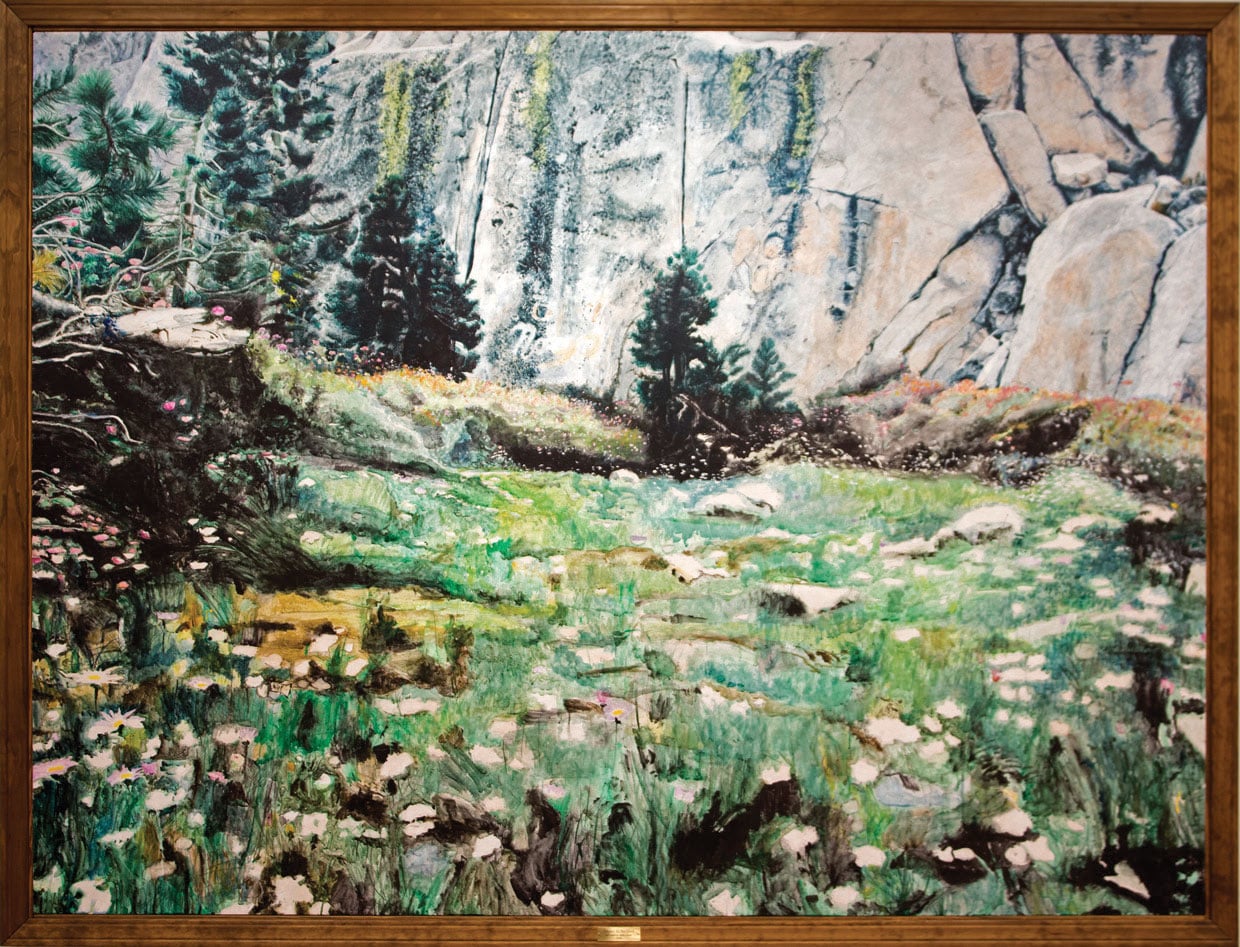 Sorrell’s painting There Is No God (2016, acrylic on canvas, 6 x 8 feet) is named after a climbing route and offers a wink and nod to the landscape paintings of the 19th century. Photo: Paul Kos