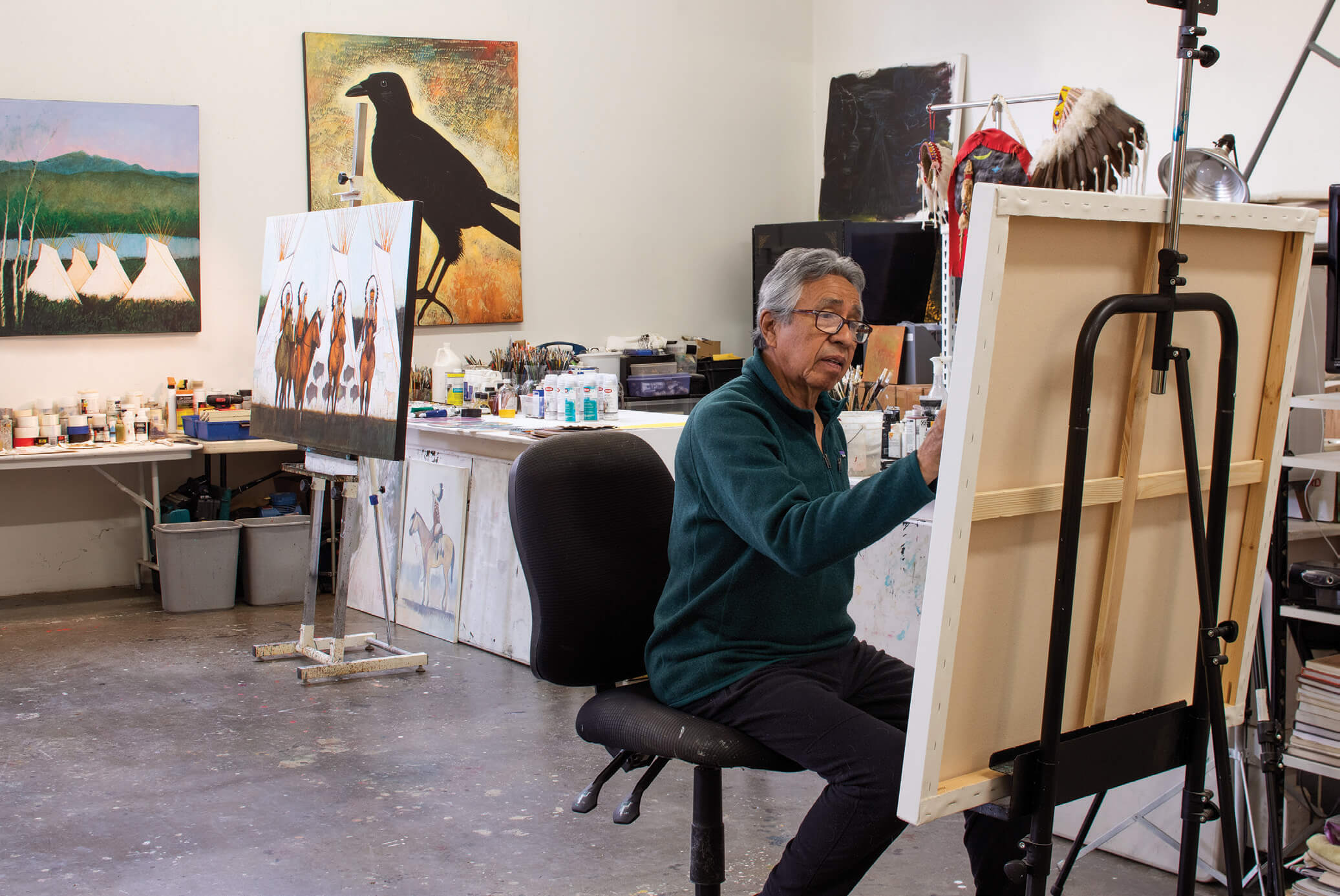 Kevin Red Star sits at one of the easels in his studio located in Roberts, Montana, 30 miles south of Billings. He usually works on three or four paintings at once.

05 May In the Studio: Transformations

The siding on the building that houses Kevin Red Star’s studio is burnished wood, giving it the look of an old weathered barn. Unassuming. Natural. Two words that could easily apply to Red Star himself, despite his reputation as one of the most highly respected artists in the U.S. 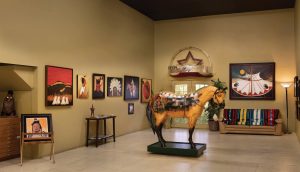 The entry to Red Star’s studio features many examples of his artwork, including a full-sized horse adorned with his images.

Red Star is a student of the world, a man who has carefully studied artistic styles from many different countries, and he’s also made an effort to find the distinguishing features of various Native American tribes. “When I go to a powwow now, I can look at the [regalia] and say, ‘Oh, that’s this tribe.’ That was not something I could have done as a boy on the rez,” he says. And although Red Star likes to incorporate all of these influences in his art, the heart of his work always comes back to where he started, on the Crow Reservation, in Lodge Grass, Montana. 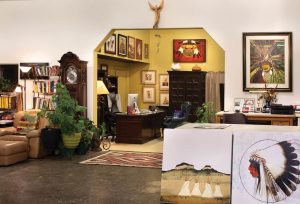 The view from Red Star’s studio into the building’s gallery shows how Red Star and his business manager, Deborah Kline-Sonderman, have worked to achieve a homey space to foster the artist’s creativity.

In 1962, Lloyd Kiva New (Cherokee), Dr. George Boyce, and a few others decided to start the Institute of American Indian Arts (IAIA) in Santa Fe, New Mexico; the school would focus entirely on Native American artists. Thanks to support from people like Ermalee Webb — whose husband Stewart Udall served as Secretary of the Interior from 1961 to 1969 under presidents John F. Kennedy and Lyndon B. Johnson — they were able to secure government funding. They sent representatives to various reservations, and that’s how Red Star was discovered. An IAIA scout came to Lodge Grass, and the locals pointed to Red Star, whose talent was already evident. 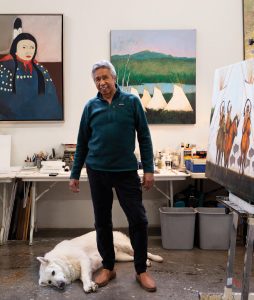 Red Star’s studio includes an apartment in the back where his daughter Sunnysky, also a painter, lives. He is frequently surrounded by family, including the dog.

Red Star moved to Sante Fe when he was only 17, and his entire world expanded. “This was a big deal for me. I was never really exposed to art before, growing up on the reservation. I was suddenly exposed to contemporary dance, abstract art, and so many things that I’d never seen,” he says. He was one of the first students at the school, which was so new that it didn’t even have a building yet. “For the first year, we shared a building with a boarding school! So it was us and all these little kids.” 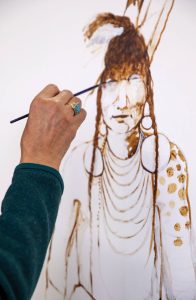 Red Star lays down the foundation for a new painting.

The culture shock must have been jarring for Red Star, whose experience with art before Santa Fe was drawing the covers of Western novels that his father loved to read. “That was the extent of my exposure to art before I went to Sante Fe,” says Red Star, laughing at the memory. He laughs easily and often, belying a lifetime of struggle to become the famous artist he is today. 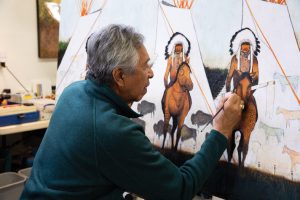 Red Star adds the finishing touches to a commissioned work. His devotion to the specific details of Native American traditions has always been an important focus of his art.

After graduating from IAIA, Red Star continued his studies at the San Francisco Art Institute before returning to Montana in 1967. In 1974, IAIA invited him back as their first artist-in-residence. Over the course of his long career, his paintings have appeared in more than 100 exhibitions and dozens of museums have featured his work, including the Smithsonian’s National Museum of the American Indian, C.M. Russell Museum, Heard Museum, Denver Art Museum, and Eiteljorg Museum, among others. 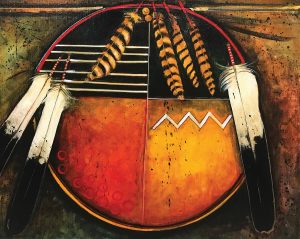 “[Red Star’s work is] sensitive in both traditional accuracy and unbridled artistic exploration,” says Rachel Warner, a Montana artist who studied with Russell Chatham and is well-versed with the work of the IAIA school, especially from those early days. Warner adds that his paintings are “absolutely singular in vision and nearly priceless in the context of generational impact.”
In a book published in 2014, Kevin Red Star: Crow Indian Artist, the artist’s daughter Sunny describes how long it took for Red Star’s success to be acknowledged in his own state, much less on the reservation. “They wanted artists who painted cowboys and cattle. It wasn’t until one of his uncles was on his deathbed and told Dad, ‘I’m really proud of what you’ve accomplished’ that he realized anyone even acknowledged what he’d done.” 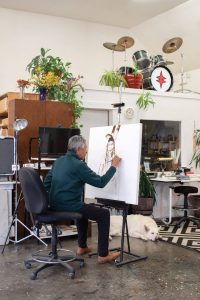 In his youth, the artist played drums in several bands and still keeps the drum set in his studio.

Red Star’s devotion to his culture and family is evident inside his studio. His business manager, Deborah Kline-Sonderman is happy to give a tour of the space, and when asked how long she’s worked for Red Star, she laughs. “Oh, we actually used to be a couple, so I’ve known Kevin for a very long time. I’m the mother of his children.” 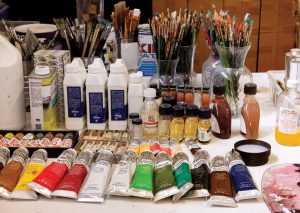 Known for his rich palette, Red Star experiments with color before starting a new work. 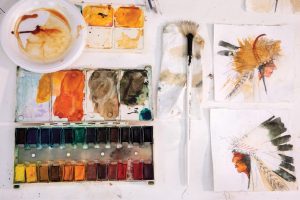 Kline-Sonderman and Red Star met in Sante Fe, and she stayed there for much of his career, but she eventually moved to Montana to work as his business manager. Sadly, the couple lost a daughter, Merida, in an auto accident in May 2008. “She was the major force who kept our gallery going in Red Lodge, and once she was gone, we really didn’t have the heart to keep it going,” Red Star says. “I have devoted every show to her since then.” 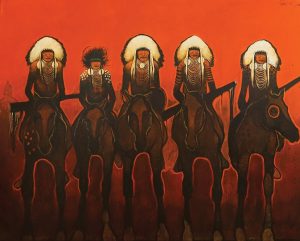 The second notable aspect about Red Star’s studio also seems to indicate what he’s like as a man. It is all about the art. Red Star’s paintings cover every wall, a burst of vibrant colors and striking imagery. The studio comprises two large rooms, one for marketing, with racks of prints and mounted paintings along both walls. The second room is where Red Star does his magic, and again, the presence of family is strong as he points out paintings he has kept for their sentimental value. One is of a beloved uncle. But his favorite is an unfinished one: a painting of his mother. “She looked at it one day and said, ‘Just leave it like that. I like it that way.’” So he did. 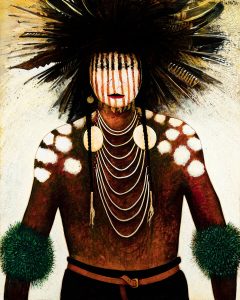 Red Star seems to have retained much of the youthful drive and stamina required to spend hours a day at his easel, and he always has several paintings in the works. 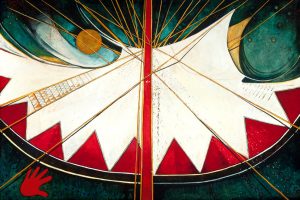 Warner shares how she thinks Red Star’s canvases fill a room with energy. “[They] dominate any space they hold with powerful, semi-abstract designs executed in primary and earth colors reminiscent of the very land from which they came. The timeless color choices in Red Star’s work seem to evoke a spiritual philosophy in tribal lifestyle.” 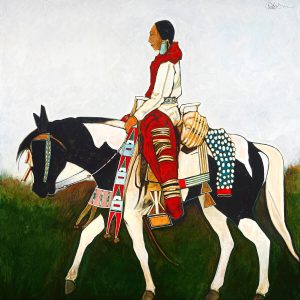 Spirituality and curiosity. You feel both in strong measure in Red Star’s presence, and maybe that’s attributable to his answer to one final question: “Have you ever taught?”
“Not really. I was the first artist-in-residence at IAIA a long time ago, but I always just wanted to paint. And I still consider myself a student,” he says. “I have always wanted to keep learning.”

Russell Rowland is the author of six critically acclaimed books, including Fifty-Six Counties: A Montana Journey and Cold Country. He has a master’s degree in creative writing from Boston University. He lives in Billings, Montana, where he teaches online workshops and hosts a podcast about Montana books, “Breakfast in Montana.”

Peter and Kelley Gibeon began their path of collaboration in 2003. Based in the Mountain West, this husband-and-wife duo specializes in luxury architectural and interior design photography. Featured in numerous publications, their passion for their clients and craft shines through in every frame.