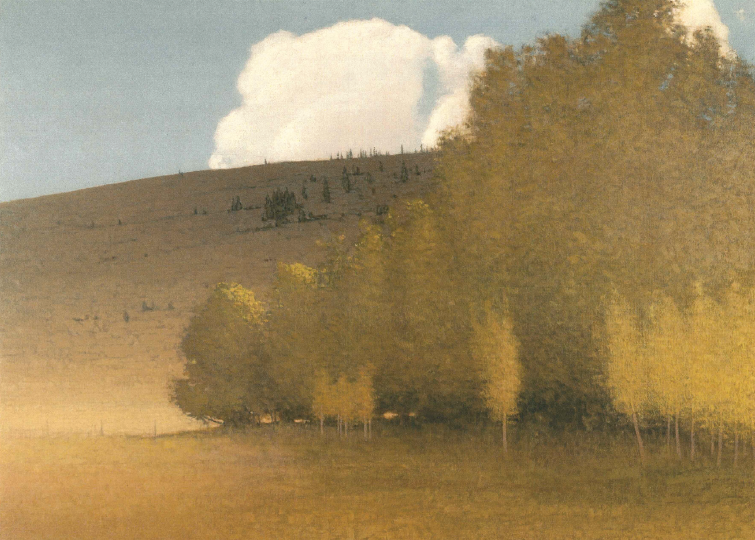 06 May Perspective: The Poetic Landscape

His face was that of a Renaissance prince. His dark hair framed it, his piercing eyes glared, and a crooked nose — broken in childhood — looked permanently out of joint. Though often dressed in overalls and a T-shirt, he wore a trim mustache that seemed to be a nod to his father’s British ancestry: “from the first Earl of Chatham,” artist Russell Chatham often bragged. His mother’s lineage was one of “Swiss-Italian peasants,” he told A.J. Scaff in a 2009 interview, “which is why I’m comfortable sleeping under a trestle or dining in a castle.”

Chatham was a world-class angler, a talented chef, a brave restaurateur, an audacious publisher, a prolific author, a dedicated lithographer, and a painter whom Museum of the Rockies curator Steve Jackson called “one of the most important artists in an important region … a significant artistic voice for the poetic landscape, through his love of place and painting.” Art critic Tad Bartimus linked him to a “chain of New World painters, such as Albert Bierstadt and Thomas Moran, who captured the American West when it was still a land of buffalo and wild rivers.” And essayist Chris Waddington wrote that his work “reminds us that landscape is the original modernist genre.”

Chatham was a titan of Western art who — despite having sold canvases priced as high as $1,500,000 — died in reduced circumstances near San Francisco, California, on November 10, 2019. He was 80 years old. 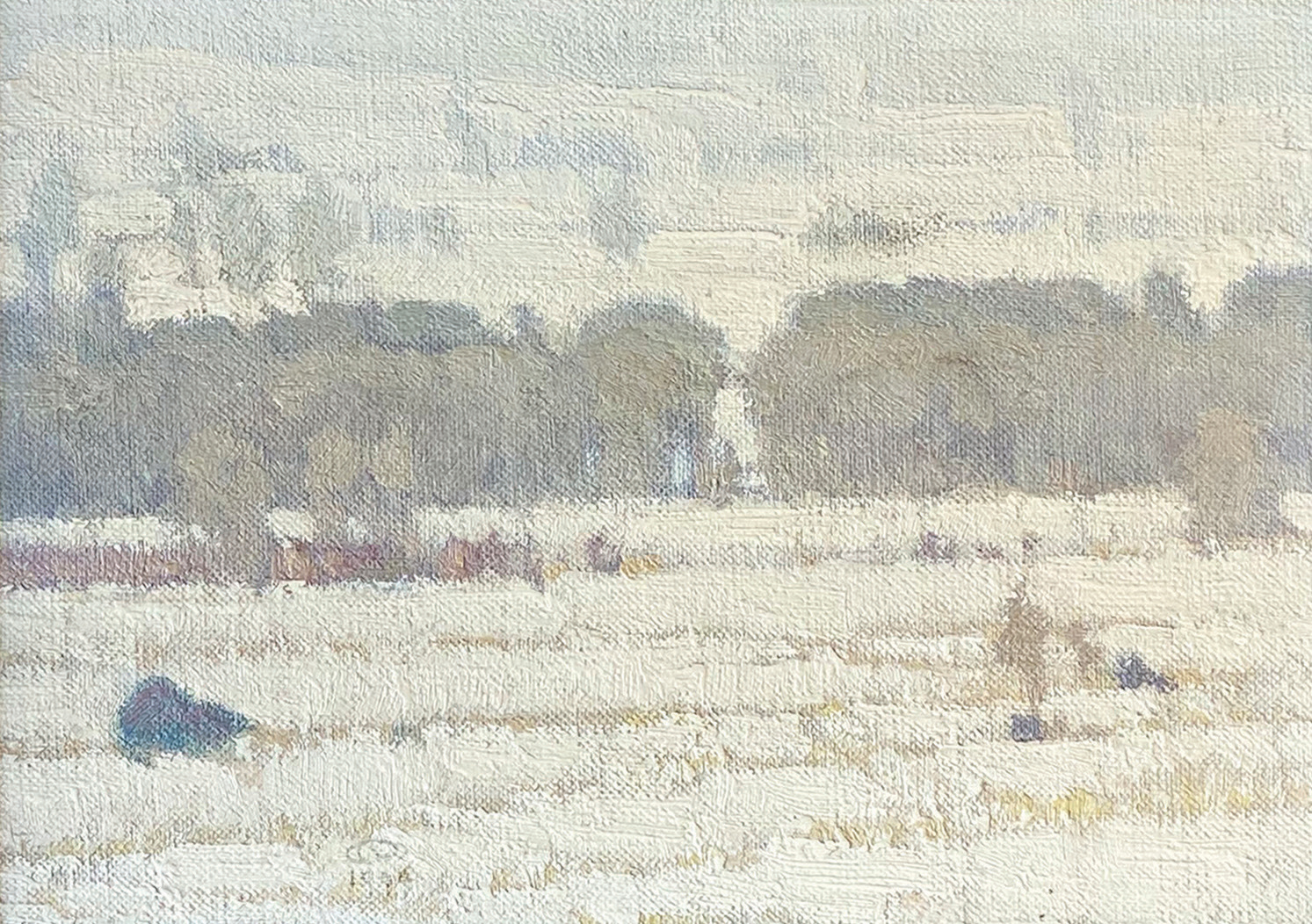 Chatham had been a Rabelaisian figure. Food, drink, and ribaldry took their toll. “He hadn’t really been able to paint for the past two years,” says his daughter, Lea Chatham McCann. At his death, there remained few finished canvases. In 2010, Chatham’s Livingston, Montana, gallery, real estate holdings, and lithographs had been seized as payment for his debts. “The bank took all his art,” McCann says. By 2011, she adds, “we had resolved almost all of his financial issues. But he left Montana for California.”

Chatham died in a memory-care ward, near San Francisco “of kidney failure, alcoholic dementia, and psychosis,” McCann says, adding that during his life, he’d struggled with manic depression and was hospitalized many times. “Each depression got significantly worse,” she says. “Ten years ago, they were so bad he almost died. Many times.”

Chatham’s work was a tango between light and dark. Upbeat paintings such as Aspens (1997), depicting a sunlit hillside with yellowed trees, or Paradise Valley in August (1995), with shadowed aspens against ocher grass, contrasted with canvases like Rain Squall (1991) or Thunderstorm Over the Gallatin Mountains (1989), which were moody evocations of nature’s vacancy. “Albert Ryder was a painter that I had some affinity for,” Chatham said in 2009. “Here was a temperament much more like my own: intimate, somber, brooding.” The dark palette of that 19th-century fabulist was seen in Chatham’s best work, which captured both the tranquility and loneliness of Montana’s landscapes. “People will make the comment that my paintings are so calm,” he said. “Well they are not calm really … more than any place else I’ve been, Montana’s light, air, sky, and mood change radically from minute to minute.” 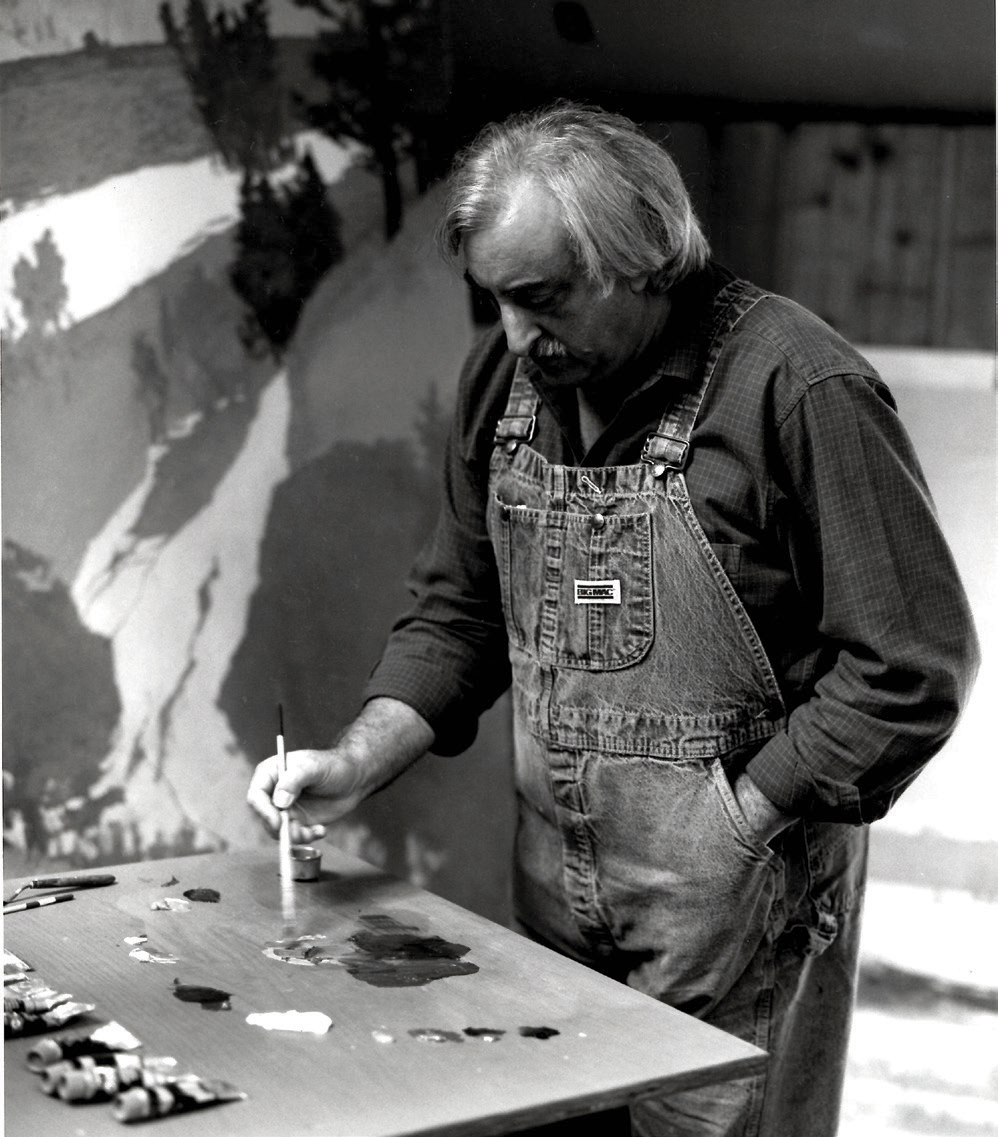 Novelist Jim Harrison observed that in Chatham’s paintings, ”you will see not landscapes, but the marrow of landscapes, where you will witness, in Buddhist terms, the natural antagonism between emptiness and form.”

Chatham was a Californian by birth, having grown up in San Francisco and nearby Marin County. His father worked for the family lumber business, “and was the unhappiest man I’ve ever known,” Chatham said in a 1990 interview. A graduate of Stanford in English literature, the elder Chatham “could memorize vast amounts of poetry. He could draw beautifully … but his spirit was completely broken by his father, who was a very harsh robber baron.” Chatham’s father “drank himself to death,” the artist explained to Scaff. “It’s a terrible story.” And one he was determined not to recreate.

During summers as a boy, he would escape to his maternal grandfather’s ranch in the Carmel Valley, where he painted. Much has been written about his grandfather, the celebrated San Francisco painter Gottardo Piazzoni, and his impact on Chatham. “He was the single most important influence on me,” Chatham said. Because of family discord, Chatham had been “insecure, shy, and afraid almost all the time,” resulting in “years of pointless, unexplained terror,” he wrote in 1984. But, through Piazzoni’s art, “I had my grandfather to lean on. That’s why I didn’t give up.”

He had witnessed his grandfather’s death when he was five years old. One morning at breakfast, “Papa looked over at me with an expression of mild surprise, quietly said, ‘Goodbye,’ and fell forward.” Chatham sensed the room to be “filling with spirits.” Perhaps, he wrote in his remembrance of Piazzoni, “something of [Papa’s] spirit entered mine at that moment … not one single minute has passed since then that I have not struggled to be good enough for him.”

For years after he moved to Montana, Chatham painted images of California. “Having seen nothing but my grandfather’s paintings,” he told Scaff, “it was a struggle to find out who I was.” And it took time to see the Montana landscape. Though its fields and foothills were comparable to those in Carmel Valley, “The new landscape baffled me,” he said. He painted California from memory until late summer in 1972, when he made his first Montana sketch, Sheep at Deep Creek. 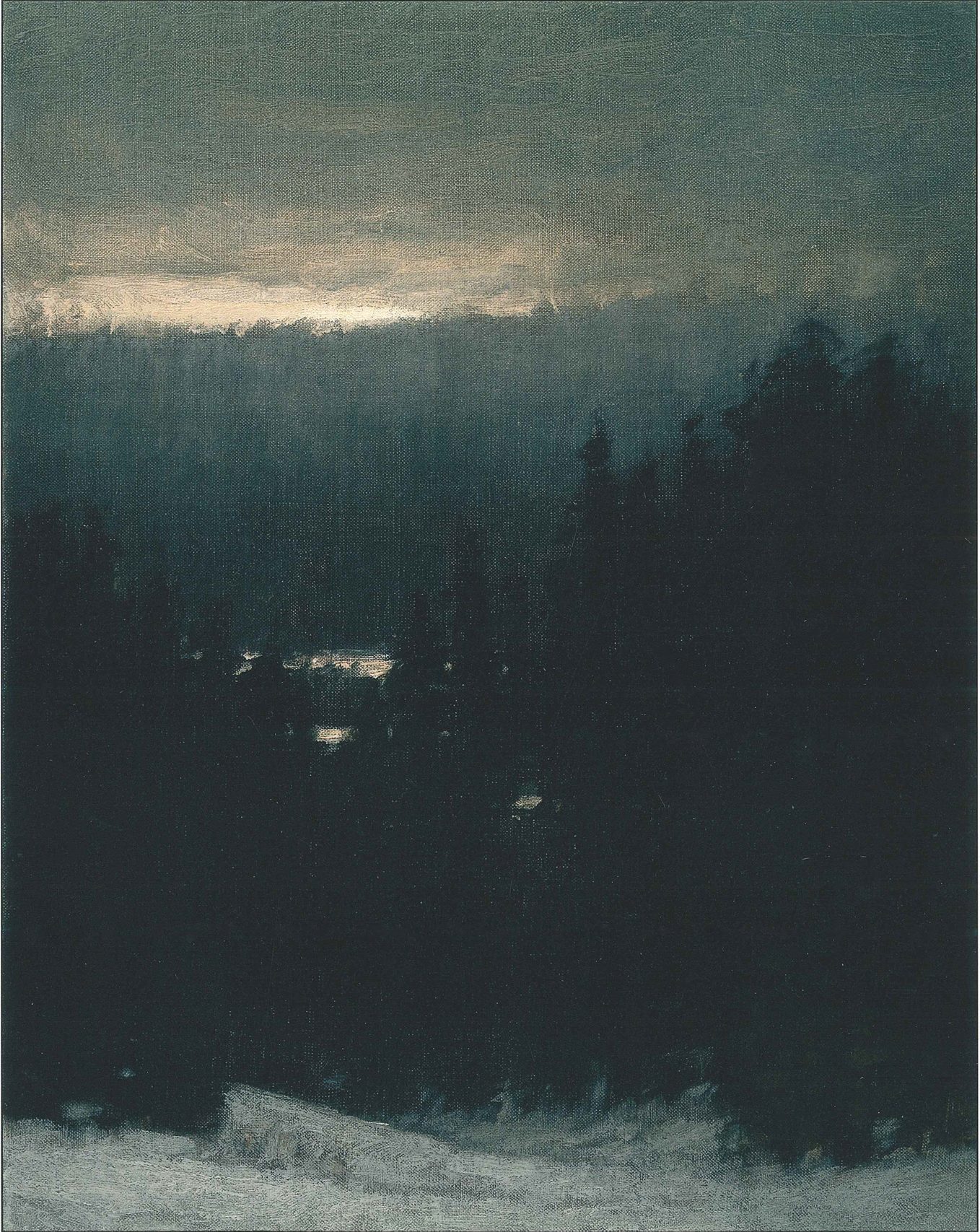 The previous fall, he had visited his friend and fellow angler, author Thomas McGuane, who kept a ranch on Deep Creek. The house Chatham rented was near McGuane’s and was owned by the realtor Don Nell, who told Chatham, “I knew if I waited long enough, an artist would come along to rent this place.” Chatham signed a 99-year lease for $800 a year. His adventure in Montana had begun.

Chatham had met the novelists Richard Brautigan, William Hjortsberg, and McGuane while living in Bolinas, California, in 1967. The latter had heard that Chatham, who’d recently broken a world’s record for striped bass caught on a fly, lived in Bolinas. “Because of the name,” Hjortsberg told Waddington in 1989, “we thought he’d be this tweedy English gentleman. He was just another ragged artist like us.”

Chatham’s post-Piazzoni mentor, artist Richard Van Wingerden, had died in 1970, and when McGuane moved to Montana, Chatham followed. “Tom had total confidence in himself,” he recalled. “All day we’d talk about fishing and art — how anything less than absolute commitment just wouldn’t work.”

McGuane encouraged Chatham to write, and the artist produced hundreds of articles for magazines like Sports Illustrated and Gray’s Sporting Journal. Chatham collected them in four books, including his last, Dark Waters. “His special voice was all his own,” McGuane says. “I certainly didn’t teach him anything.” But McGuane did introduce Chatham to a succession of Hollywood associates. In 1975, “The Missouri Breaks” (McGuane wrote its screenplay) was filmed in Southwest Montana, and its co-lead, Jack Nicholson, met Chatham that year. Over time, he would purchase 30 Chatham canvasses. Robert Redford, Michael Keaton, Harry Dean Stanton, Margot Kidder, Peter Fonda, Harrison Ford, Tom Brokaw, and other celebrities followed suit.

Piazzoni died broke but satisfied with his production of art. The choice for Chatham was clear. During the 1970s, selling just a few canvases a year, he subsisted without oil heat or, often, electricity, swapping art for firewood, medical and legal services, babysitting, and rent. He painted a series of commissioned portraits of neighbors, but took umbrage one day when a cowboy offered him $50 to paint a chief’s head on a circular saw blade. 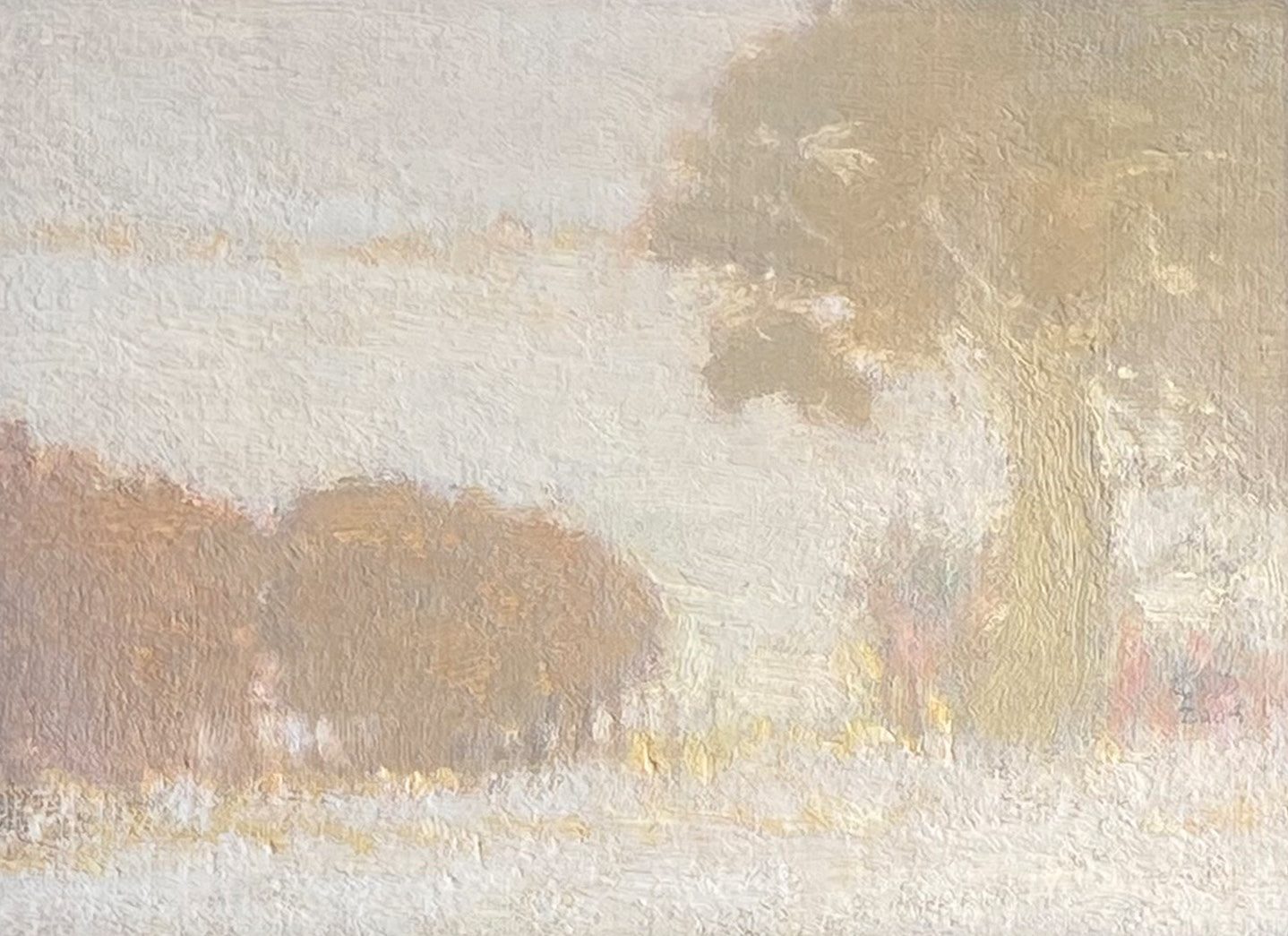 He was beset “more frequently by black moods of long duration,” he wrote in his 1987 booklet, Russell Chatham. These were cyclical and easily prompted. “I’d drive past McGuane’s,” he said, “and think, ‘Time magazine’s visiting him again,’ when nothing critically was happening for me. Yet, I’d idle there above Paradise Valley and get an idea for a painting. One night, I stopped above Tom’s and got so excited by a hole-in-the-clouds scene that I scratched it onto the truck’s fender with a rock. I didn’t have any paper.” That sketch would become Moonrise Over the Absarokas, a 50-by-60-inch canvas bought by Peter and Becky Fonda.

Chatham was poor but not laboring alone. A platoon of artists had occupied Livingston, a town which by the early ’80s sheltered Sam Peckinpah, Warren Oates, Richard Brautigan, Margot Kidder, Jim Harrison, Dennis Quaid, Jeff Bridges, Peter Fonda, Tim Cahill, and Hjortsberg, among other celebrities. That community was part of an artistic guild Chatham identified as “thousands of years old, with the understanding that, unlike science, art does not, and cannot progress. All is known.”

Still, Chatham was of the world, and his efforts from the late 1980s through 2006 included the founding of Clark City Press, Rebecca Fine Arts (to market his lithographs), and Chatham’s Livingston Bar & Grille, an upscale bistro considered by many as the finest restaurant in Montana. He was extraordinarily generous, lending money to friends and strangers alike. But health issues dogged him. In a manic phase, according to McCann, he over-leveraged his real estate holdings and, after the 2008 recession, lost everything. In 2011, he granted a boozy interview to Montana’s Whitefish Review, in which he lambasted Livingston’s culture, described his melancholy, and claimed to have tried to shoot himself. “I was so black then,” he told the Review. “This table is white compared to where I was.”

The interview caused a stir. “I begged [Whitefish Review] not to print it,” McCann says. “It just made him sound crazy. But he really was in a massive depression. I did everything to try to pull him out of it.”

With his art and businesses lost, the pull toward California was overwhelming. During the winter of 2011, without telling anyone, Chatham packed his “10 gray T-shirts and three pairs of overalls,” and drove south to Marin Country. He felt at home in Piazzoni country. He slept at various places, then bought a house in Point Reyes Station, where he planned to open a gallery. Poor health prevented him from doing so. “That was pretty heartbreaking,” McCann says. His drinking had increased, and “ultimately it’s what ended his life.”

At his death, tributes appeared in the San Francisco Chronicle, the Billings Gazette, and other publications around the country. McGuane told the Chronicle, “[Chatham] saw things askew from most people … If [he] looked at a landscape in California and Montana and decided to paint it, he wouldn’t look at what most people look at. His outlook was fresh and surprising.” 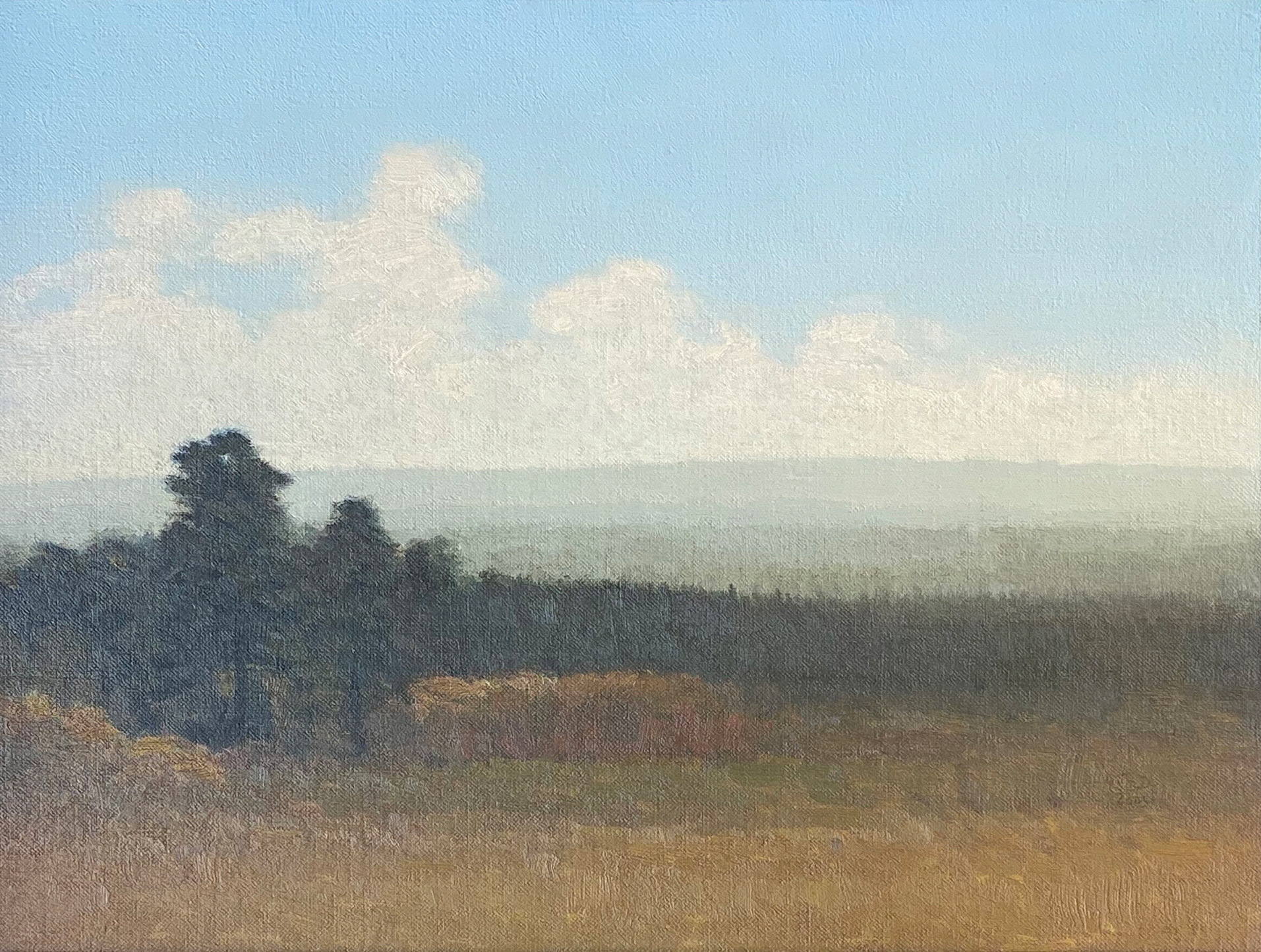 Museum curator Jackson recalled that, “Russell Chatham once described his paintings as expressing the poetic or meditative nature of the landscape, searching for something beyond ourselves, and allowing greater freedom for the viewer’s imagination.” These were succinct appraisals. But in 2009, while still hopeful and planning a retrospective, Chatham had characterized his life and art in a uniquely Chatham-esque manner. In a letter to friends and patrons, he wrote: “Picture a pastry bag, and in it are … the essences of Gottardo Piazzoni, Ryder, Whistler, Van Gogh, the Sung masters, and a thousand others.” When squeezed, from the decorative nozzle “comes this peculiar, white-haired human being, who sits alone all day in a pair of overalls under a skylight and in front of a canvas trying to turn red, yellow, and blue into songs of the imagination, while the wind howls and the snow swirls outside.”

His commitment to his art had been total. As was his desire to communicate the essence of his spirit. He’d say, “I want to pour so much into a picture, that when someone looks at it, they burst into tears. To me, that’s a tremendous goal.”