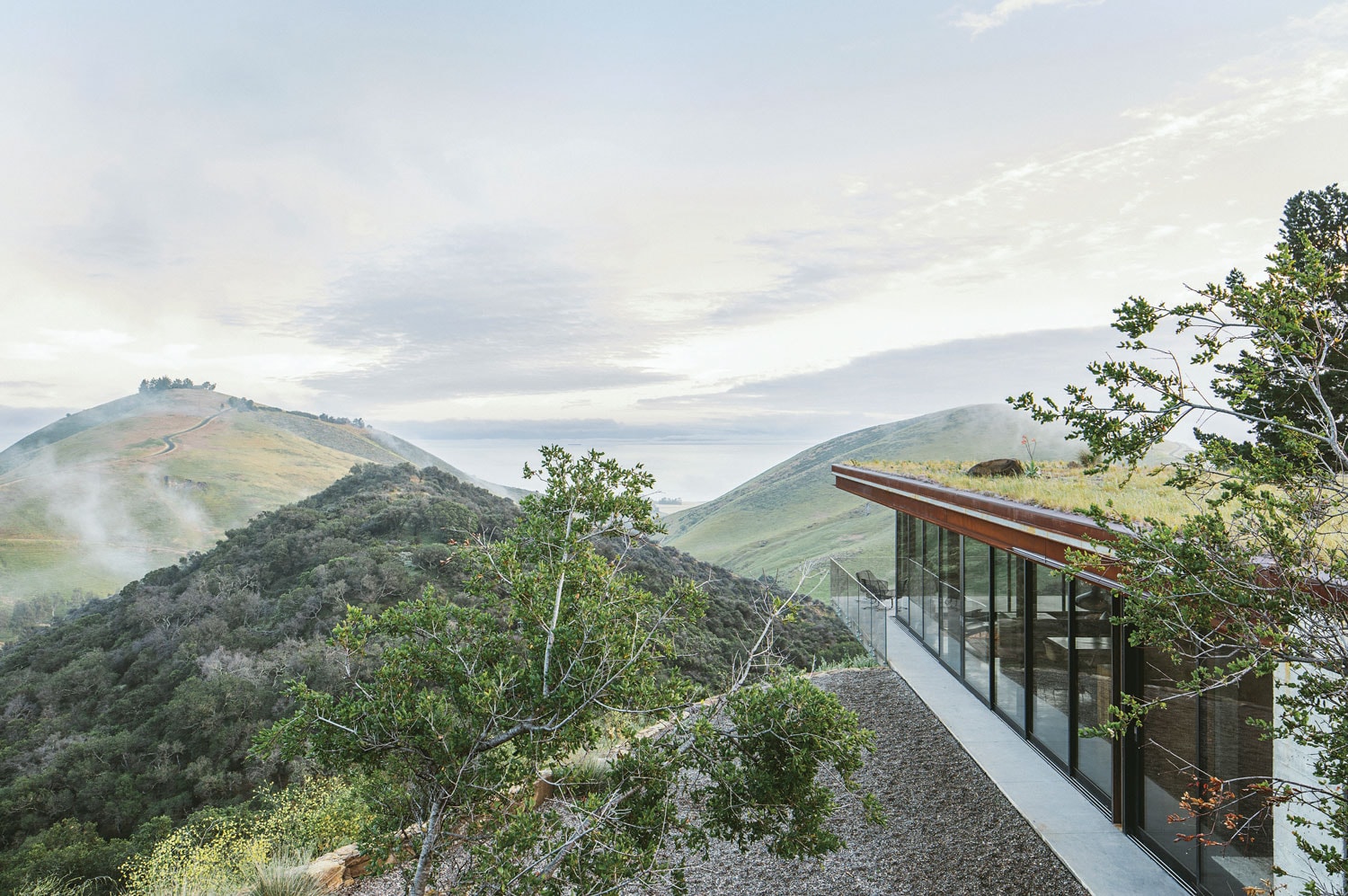 11 Sep Rendering: Celebrating the World Outside

When the owners of a parcel on Santa Barbara’s vast, historic Hollister Ranch asked Dan Weber and Steve Willson to design a guest house, they suggested the architects hike up to the site, eschewing the usual dirt road, to take a first look. Fifteen-minutes, a half-a-dozen switchbacks, and one seriously steep hill later, they arrived at a narrow hog’s back ridge that terminated at a perch overlooking miles and miles of green-gold hills that slipped down to the Pacific. 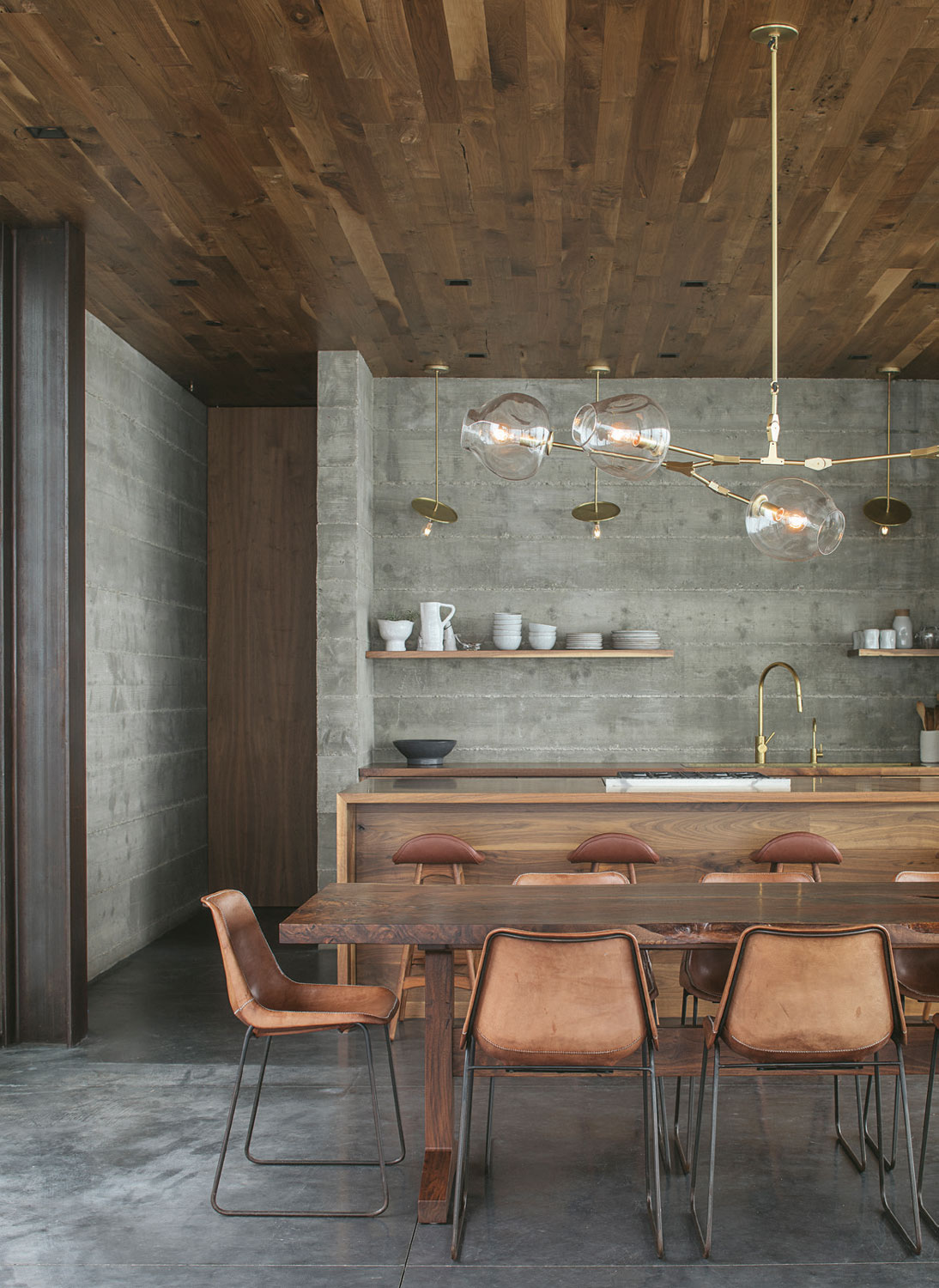 Even before that memorable first visit to the site where their award-winning Off-Grid Guest House would ultimately stand, Weber, the founder of Anacapa Architecture, and his design partner Willson, of Willson Design, were already known for having a bold modern aesthetic, often elemental, sometimes raw, in which interior and exterior spaces merge as organically as ocean currents. They were, in other words, up and coming.

So it’s not outlandish to suppose that a site with such an operatic vista might set a young architect’s imagination on fire with ideas. Instead, Weber hesitated. So taken with the perfect beauty of the place, he thought it should remain as is, for the hawks, the deer, and the grass.

“Oh my gosh,” he recalls saying, “I don’t think this should be touched at all. The project here should be no project; it feels like a sacred site.”

Willson’s head, meanwhile, was filled with thoughts of the huge challenges involved in building on such a remote ridge. All of which they would overcome, if not with ease, then with persistence. 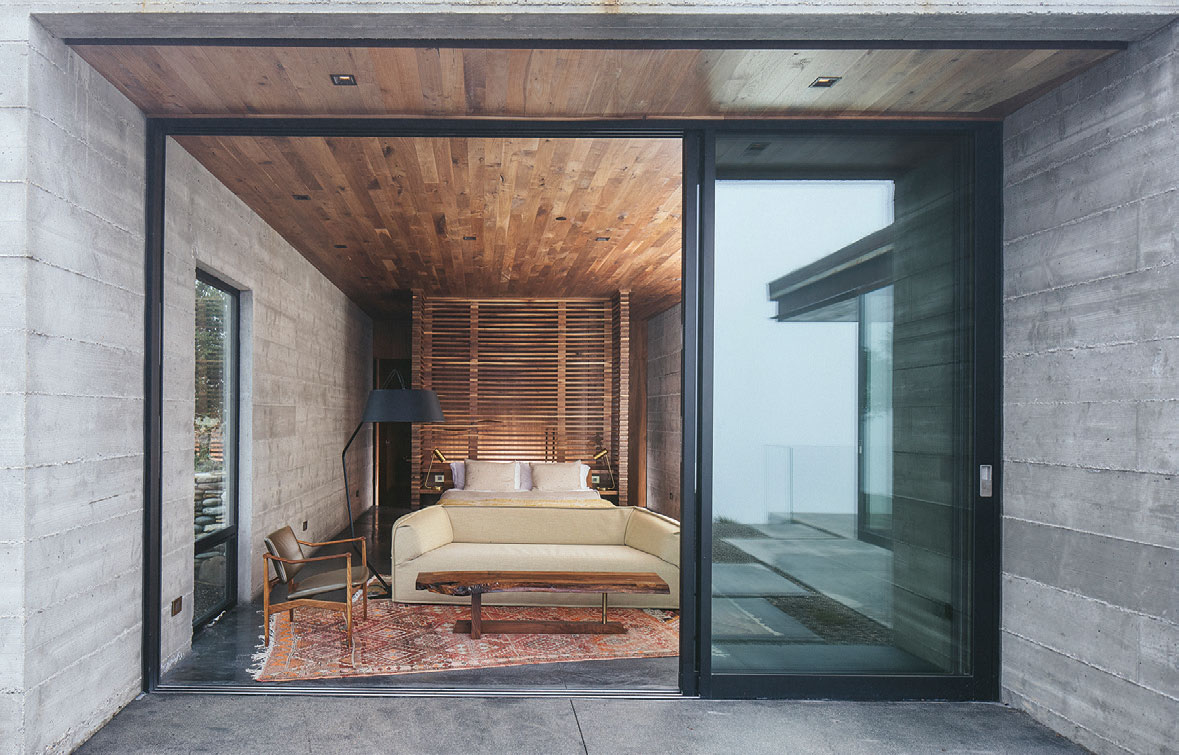 Just inside a sliding glass door by Fleetwood, an ivory-colored leather couch and vintage rug soften the rustic palette of steel and concrete in the Off-Grid Guest House. The walnut ceiling and wall panel raise the coziness quotient.

Weber was born and raised in Big Horn, Wyoming. His mom was an artist; his uncle, an architect. He had creative inclinations of his own from an early age. In architecture school at California Polytechnic State University, he met Willson, who was born in Texas but moved to the Bay Area with his family at age 10. They became buddies, and eventually roommates.

After graduation, they both started jobs at big architecture firms in Santa Barbara. Then the recession hit and projects dried up at Weber’s firm, forcing it to shut. He and Willson decided to buy a house in a quaint Santa Barbara neighborhood to remodel on spec. The small gem sold right away, encouraging the 30-year-old architects. They began sharing a funky old office one block up from the beach on Anacapa Street in 2016 — an office that for decades had been occupied by legendary surfboard shaper Al Merrick. 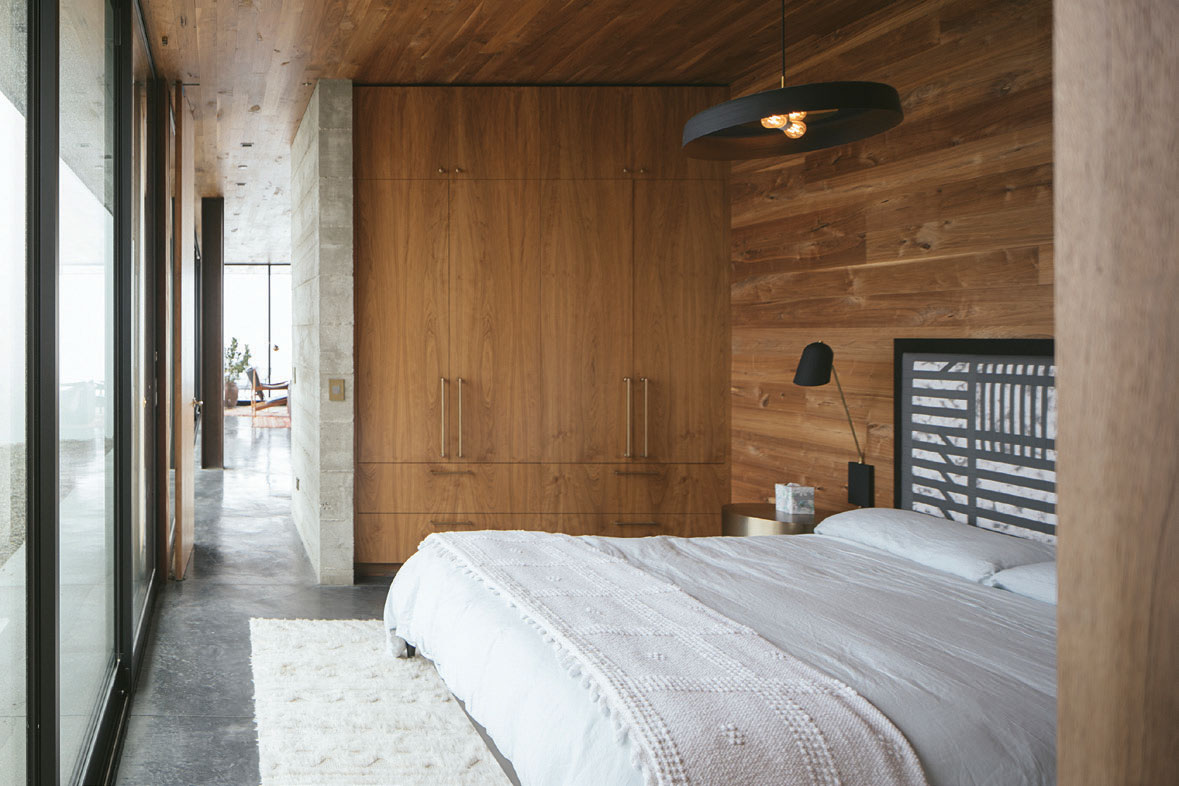 Like all of the rooms in the house, the master bedroom features a Fleetwood sliding glass door that opens to the patio and expansive view. The rug is from Anthropologie, and the headboard is custom.

“We thought it was the coolest thing in the world,” says Weber of the connection to surfing royalty. So cool, in fact, that Weber named his new company Anacapa Architecture — after the street where it was located. Willson, meanwhile, maintained his own firm, Willson Design, though the two friends continue to collaborate on projects. 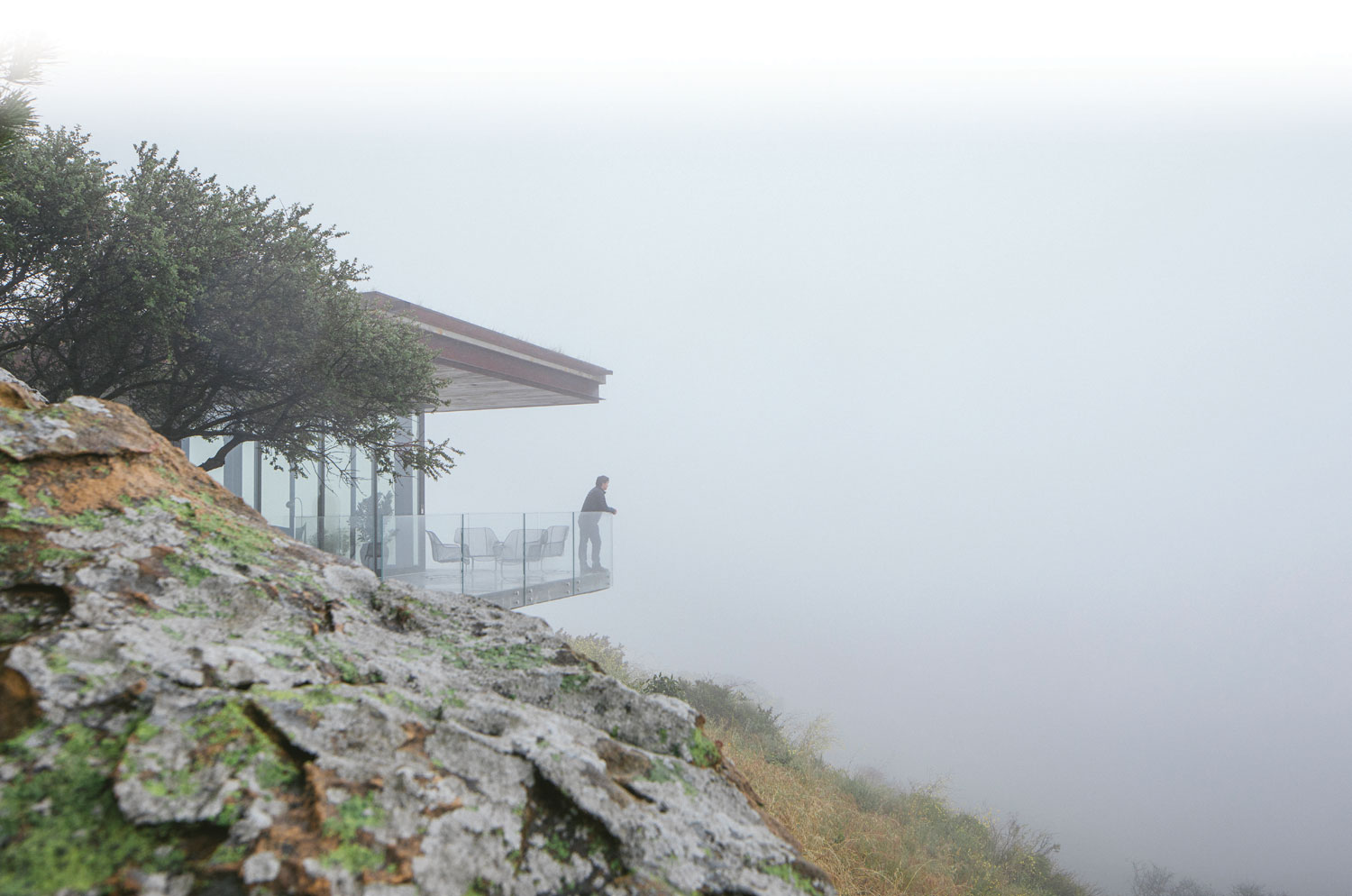 A corner of the 1,800-square-foot guest house looks suspended over the hillside. The glass balcony railing removes any visual barrier to the landscape, bringing the rolling hills that much closer.

Their lucky streak continued when the buyer of the spec house hired them to remodel another house, purchased almost immediately after the first. This led to even more projects, most notably a three-structure residence on another 100-acre Hollister Ranch parcel (different from the Off-Grid Guest House parcel). Tragically, one of the owners passed away during the entitlement phase. After a time, his spouse decided to see it through, and now, the Panoramic Coastal Ranch, a 5,000-square-foot hilltop home, is Weber and Willson at their elemental best.

Hollister Ranch’s stringent building codes require structures to minimize their visibility to neighboring parcels. Only the residence’s stand- ing-seam metal roof can be seen by its westerly neighbors as the foundation steps down in harmony with the hillside.

Ceding to Hollister Ranch’s strict design and conservation codes, the house had to be all but invisible to neighboring homes, so the roof is pitched low, and the foundation steps down in harmony with the hillside. Board-formed concrete, heavy fir exterior columns, cedar siding, and an abundance of glass work together to reflect the flora, the dry earth, and the sky. Willson recalls that the owners initially requested heavier timbers and exposed wood. So, all in all, he says, “it was an effort to make it sort of rustic modern, with really clean lines, wood, and natural materials.” 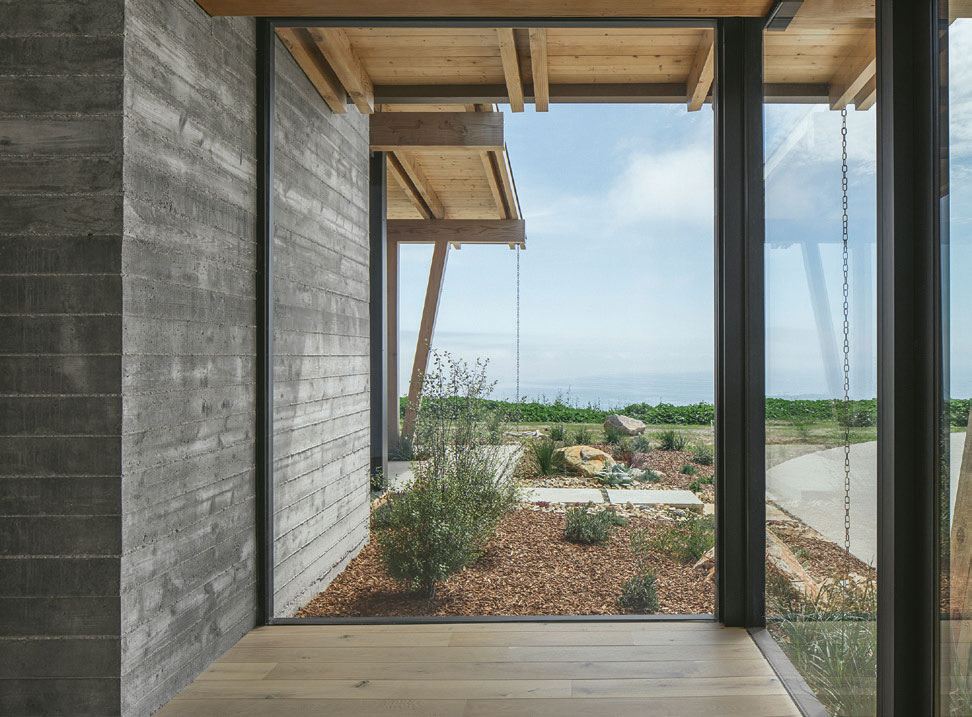 As with their Off-Grid Guest House, the materials used in the Panoramic Coastal Ranch consist of board-formed concrete, unfinished wood, and both fixed and sliding glass.

Whatever you call it, it’s still beautiful. Weber and Willson’s respect for the landscape under and around their projects, as well as the energy the structures will consume when occupied, informs their whole approach to design and is almost a philosophy in itself: from the way their voluminous spaces align with and celebrate the world outside, to the materials they use and then allow to remain exposed.

But when the context is a remote ridge disconnected from the electrical grid, without a road big enough for flatbed trucks, their thinking needed to be as free as the site itself.

To minimize disturbance to the hillside for the Off-Grid Guest House, they decided to lift the hill up, like the trunk of a car, and slide the house into it, so the landscape would literally flow onto the roof. “What’s amazing is that from the first concept drawing [the design] didn’t change,” recalls Weber. “It takes a lot of unique circumstances to have that happen. It’s got to be the right blend of owners and designers.” 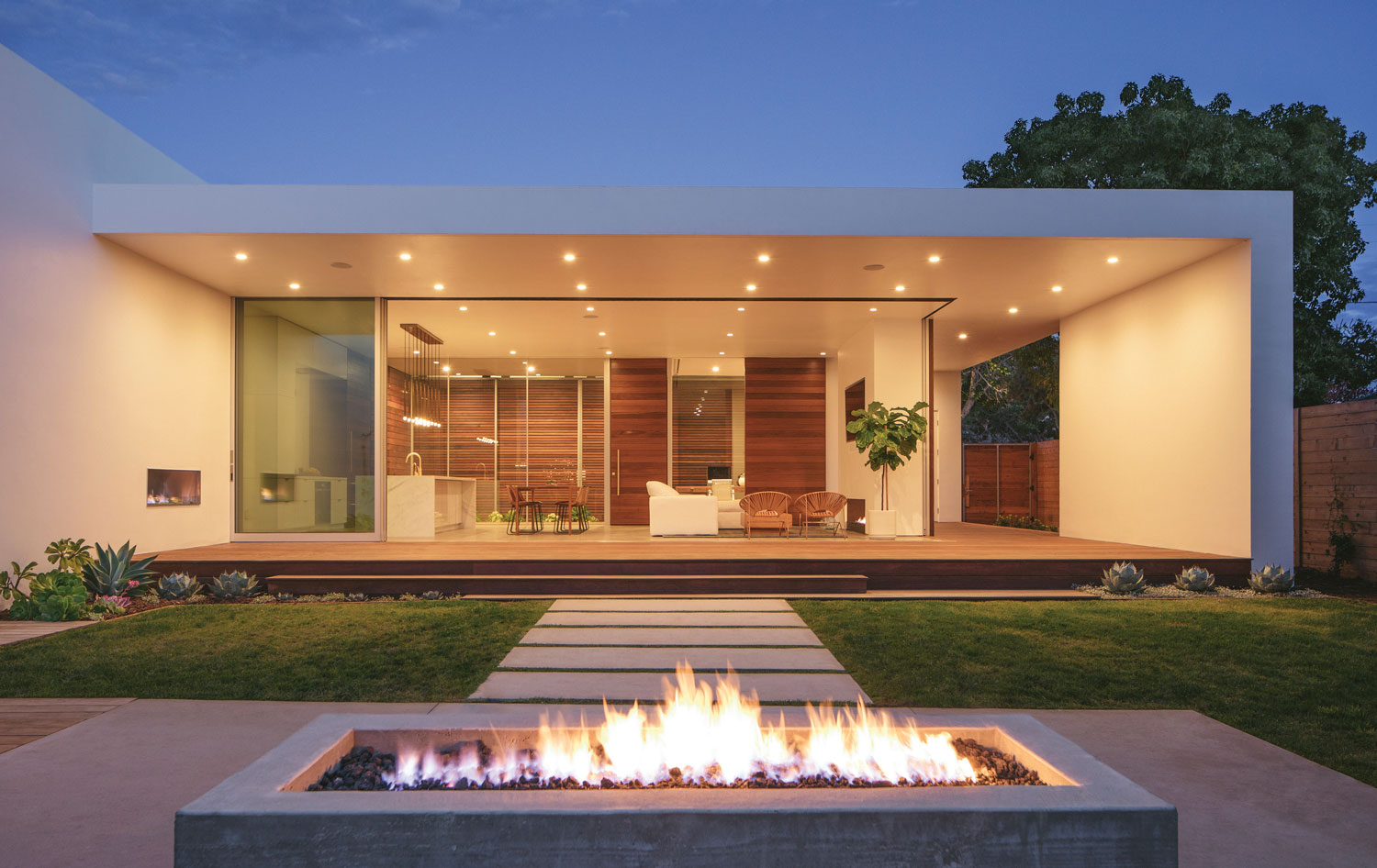 In May, Anacapa’s Off-Grid Guest House was one of 12 residences selected in the American Institute of Architects’ (AIA) 2019 Best New Homes competition, in the category of One- and Two-Family Custom Homes. Simon Ha, of Steinberg Hart Architecture and one of the AIA judges, says the Off-Grid Guest House was chosen not only for its beautiful design but also for the way the architects fit the house into the context of the environment. “They took a holistic view of how to place the house on an untouched hillside,” says Ha. “It was the sensitivity of how the house was placed. Viewed from the street, you really wouldn’t be able to see it. What you would see are the native plantings on the roof.” 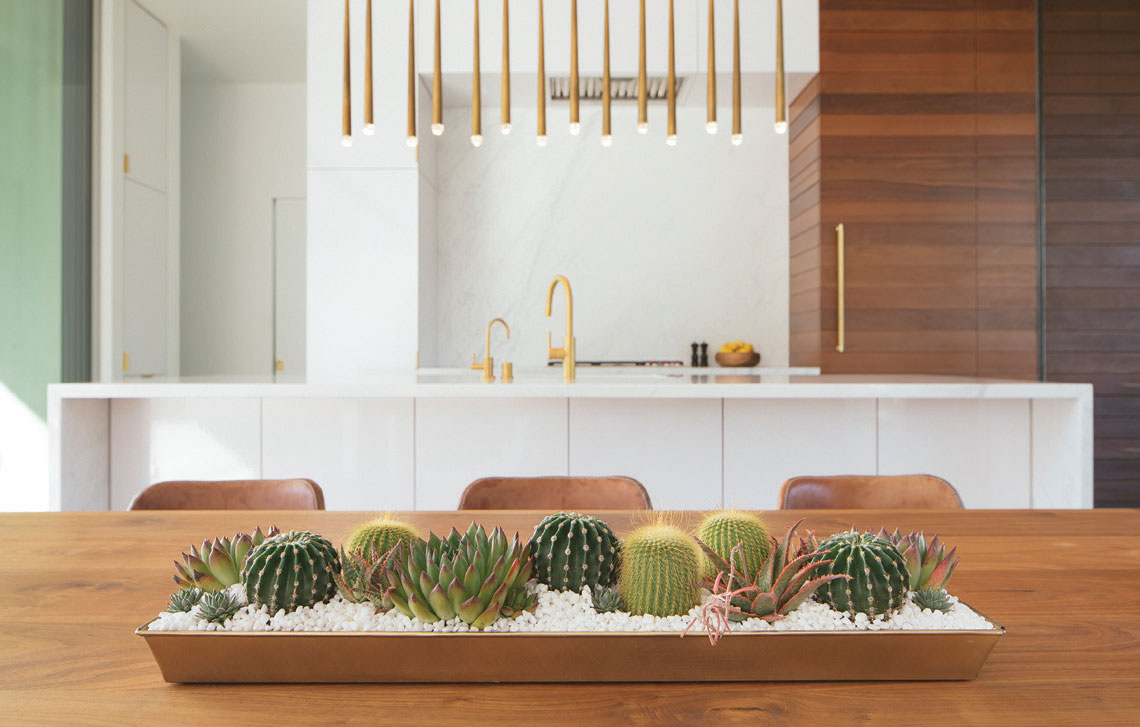 There is modesty to the design, and on top of that, it’s energy-efficient, relying on photovoltaic panels, a septic system, and a well. The grass roof hides the house from view and keeps it cool in the summer. 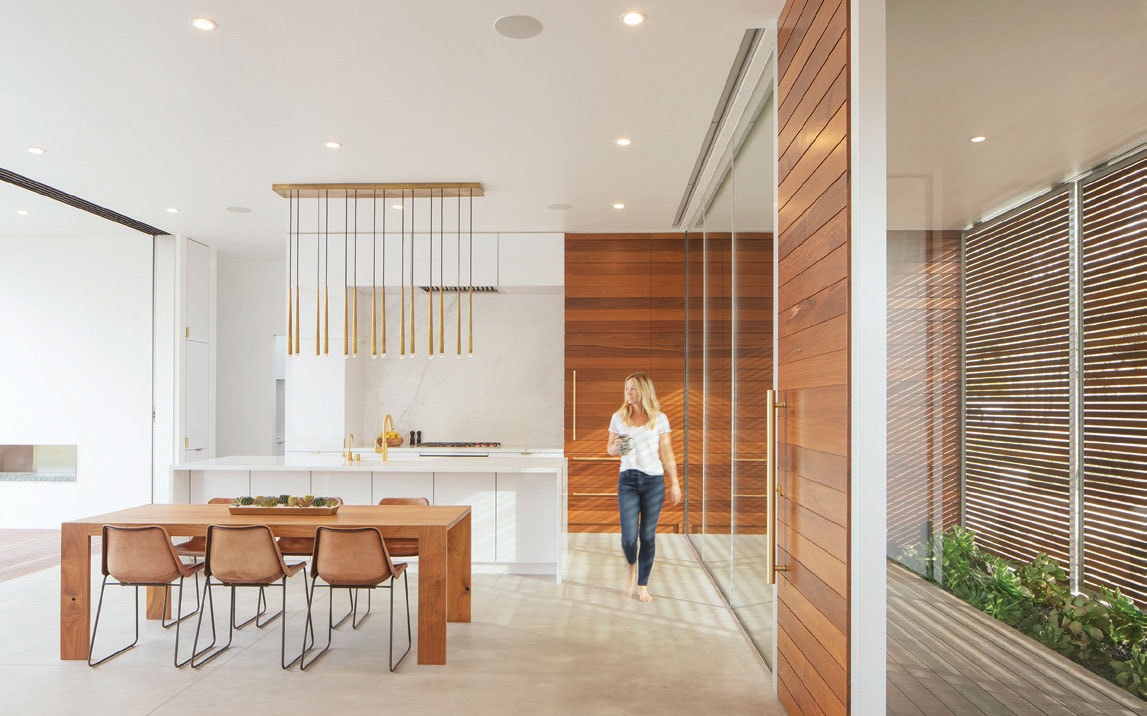 The open floor plan connects the living, dining, and kitchen areas. The high-gloss and ipe wood kitchen cabinetry are custom made by Lotus Cabinetry. The dining room chairs are from Jayson Home.

While residences continue to inspire and challenge Willson’s creativity, half of Weber’s projects now fall into the commercial and hospitality column. 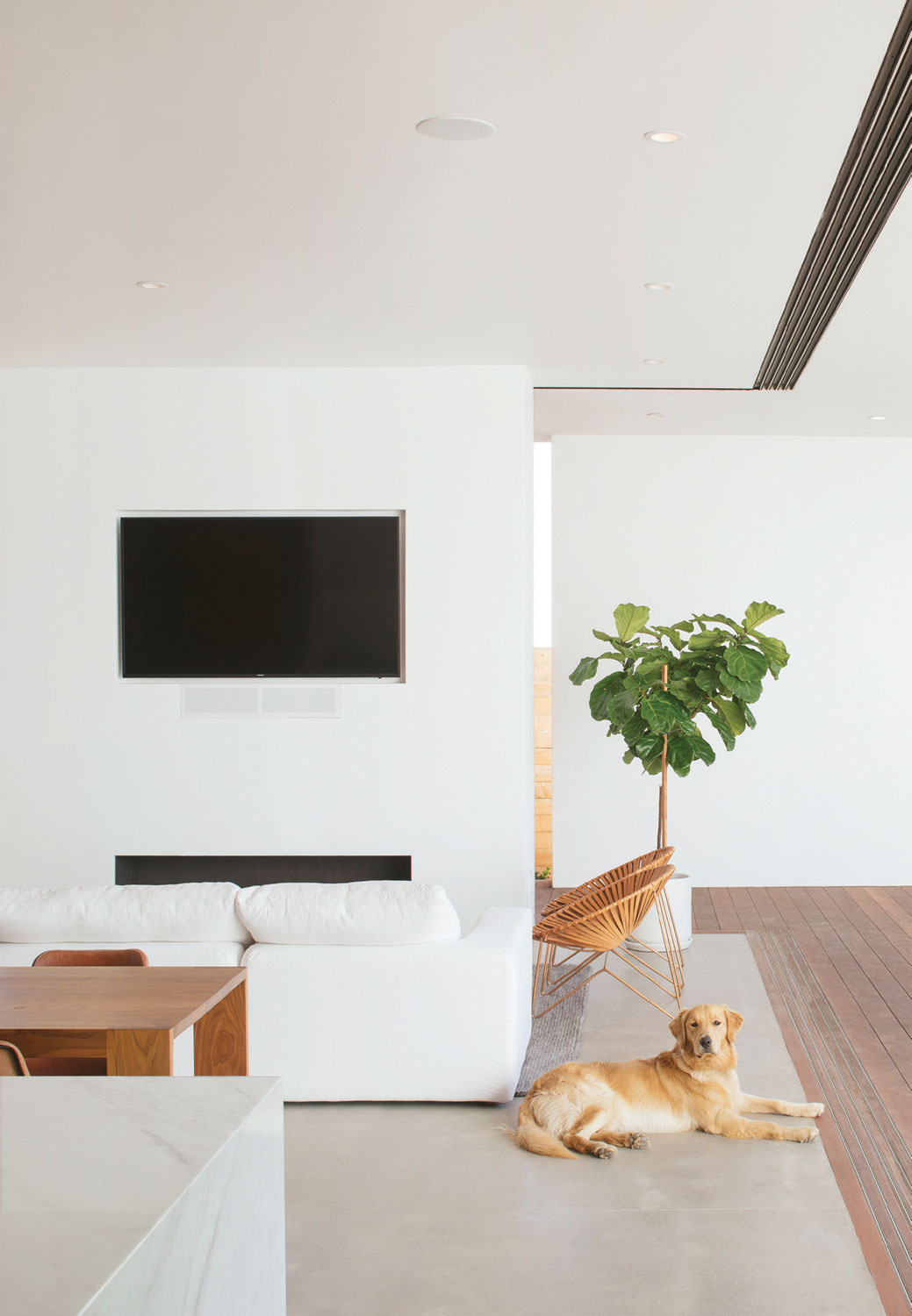 Chairs by Citizenry Leather face a built- in television and fireplace. A Restoration Hardware Cloud Couch and white walls create a tone that is both stylish and natural.

“I’ve never aspired to do single-family residences,” Weber admitted. “You spend all this time and effort and money and heartache and get a really great product, but the only people who experience it are the one privileged couple, and maybe their kids and a couple of guests lucky enough to be invited,” he says. “That’s not that gratifying to me.” 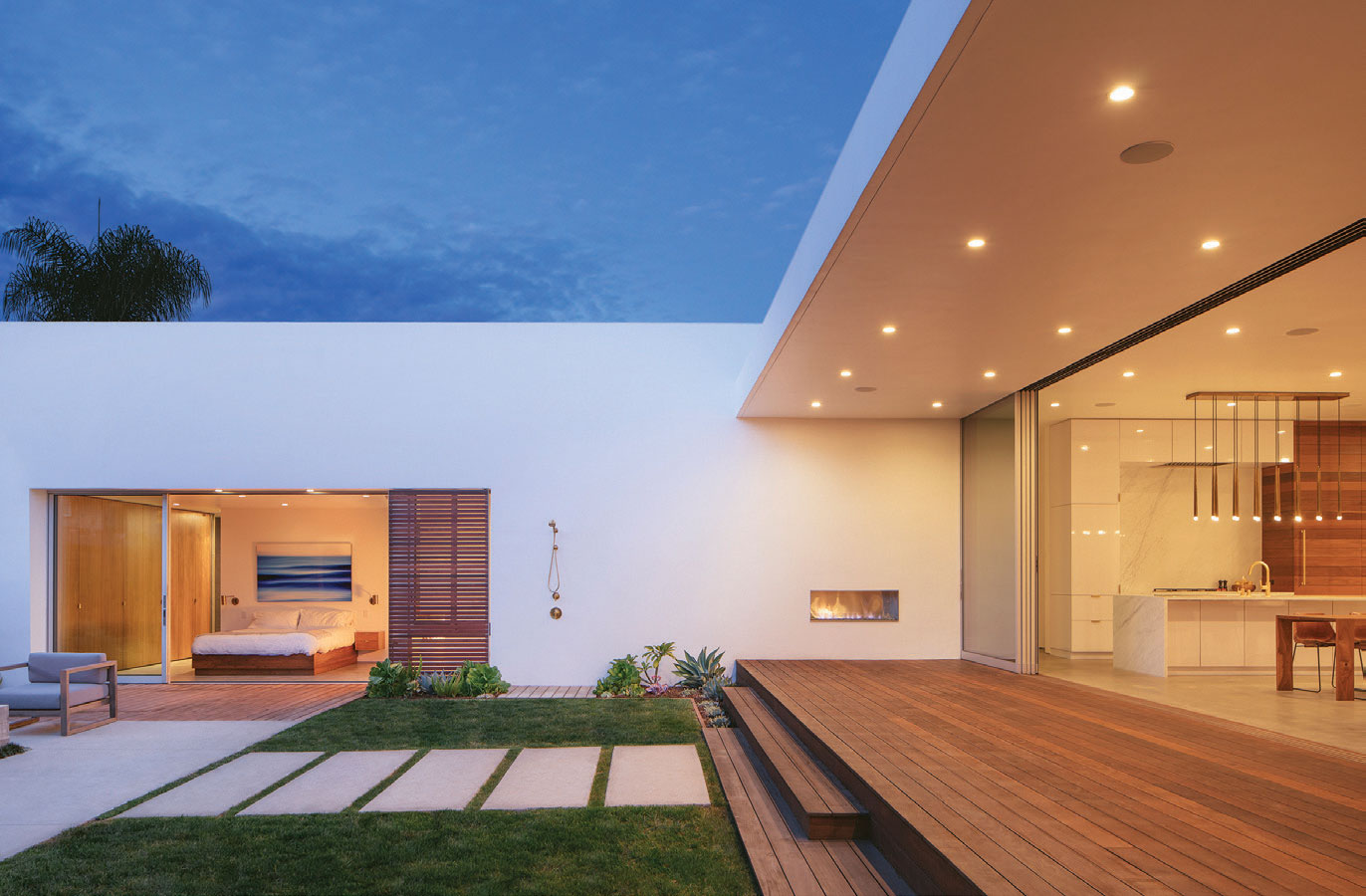 The master bedroom and central living spaces connect to the garden and outdoor fireplace by way of Fleetwood sliding glass doors. A Morgan Maassen photograph of the ocean hangs above a custom California king bed frame.

Weber would rather spend the same amount of energy designing spaces that will affect many more lives, spaces like Impact Hub, the shared workspace he helped design in downtown Santa Barbara.

“Thousands of people get to be inspired by that. Not only is [Impact Hub] hosting workshops, inviting the community into the space, and using it as a forum for community gatherings, but it has also spurred energy in the downtown.” 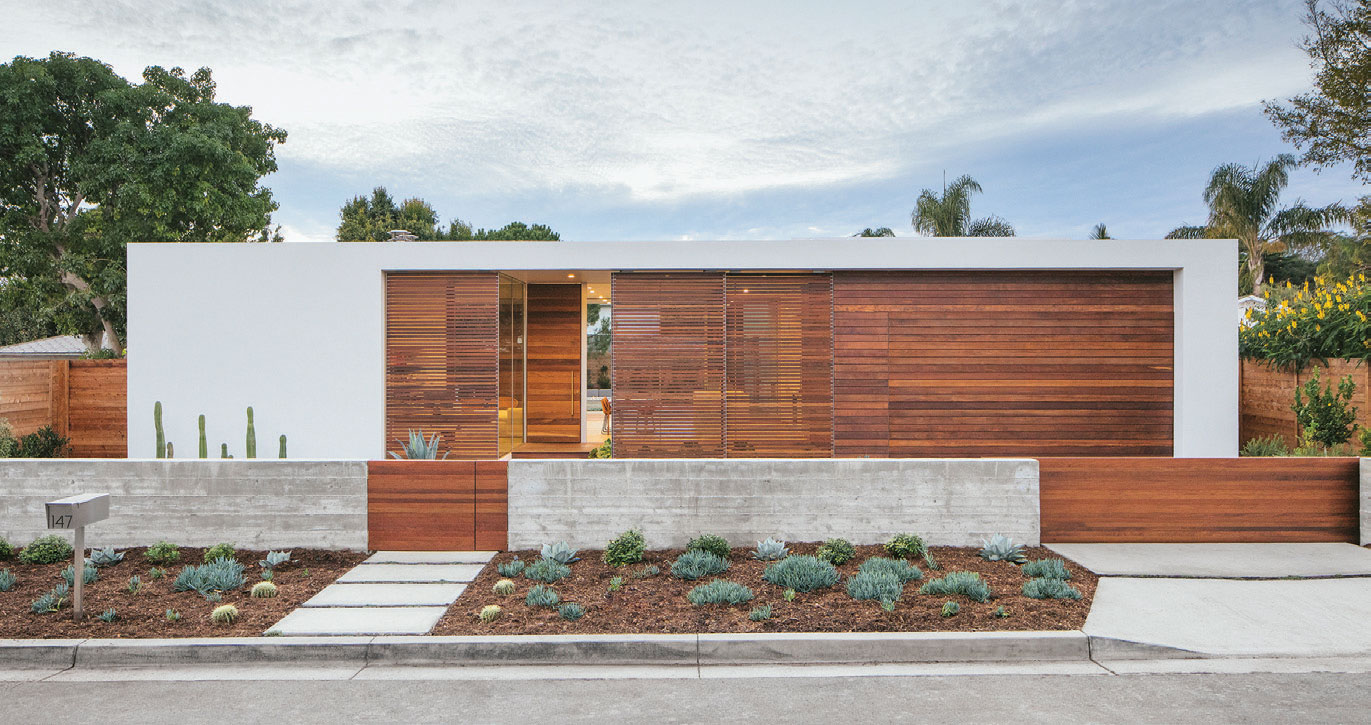 A rectangle of white, made from blocks of ipe wood, creates a satisfying resonance of form. Sliding ipe panels allow for varying degrees of privacy. A board-formed concrete wall, with an ipe wood gate, knit together the elements of an exquisitely modern exterior.

Meanwhile, he’s provided the layout and designed clubhouses for two Northern California Autocamp hotels — Autocamp Russian River and Autocamp Yosemite. The concept couples the upscale boutique hotel with the silver sparkle excitement of Airstream culture. And it’s catching on, appealing particularly to millennial couples whose dreams of chucking everything for “van life” come to a screeching halt when they accept that it would mean giving up their jobs. At Autocamp, they can experience van life for the weekend. 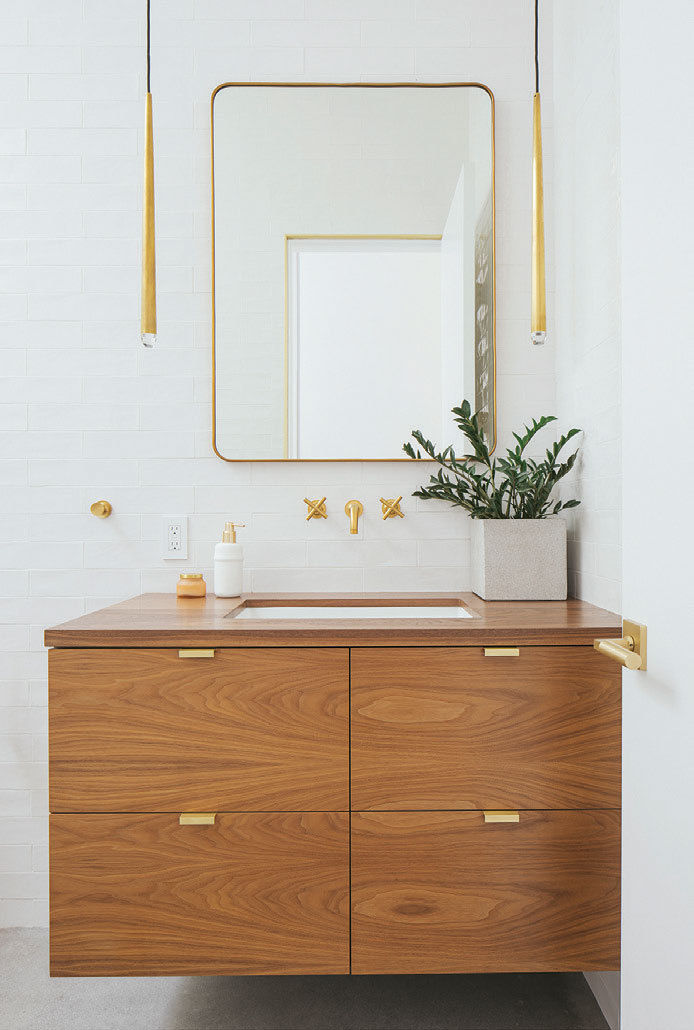 Weber’s capacious clubhouses provide solidity and sophistication to a concept that might otherwise be taken as a fad. The horizontal spaces and openings to the outdoors allow the trees to take center stage, while the untreated wood reflects the quiet presence of the forest. 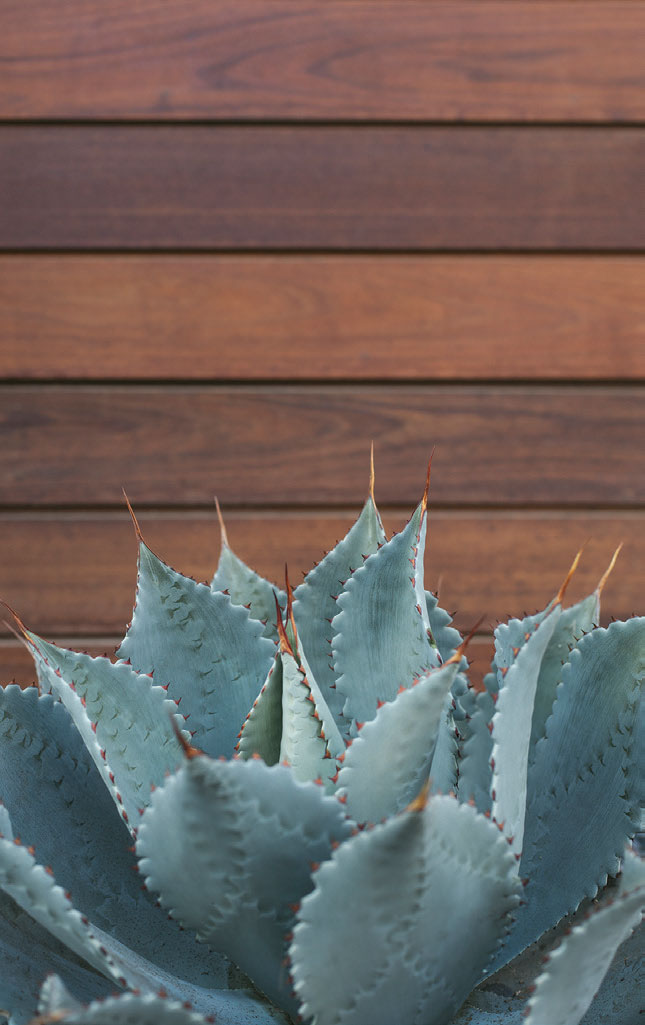 The prospect of having a greater impact on communities by designing commercial and even public projects inspires Weber to imagine more novel ways of arranging space, aesthetically nourishing buildings that encourage people to live imaginatively, work with inspiration, and connect with others meaningfully.

“It’s a field with such opportunity to be impactful,” Weber says. “The amount of effort [that it takes] to achieve one level of impact, versus the much smaller effort required for a far greater positive impact on the community, that’s the exciting thing about commercial projects, especially the ones that touch a lot of people’s lives.” 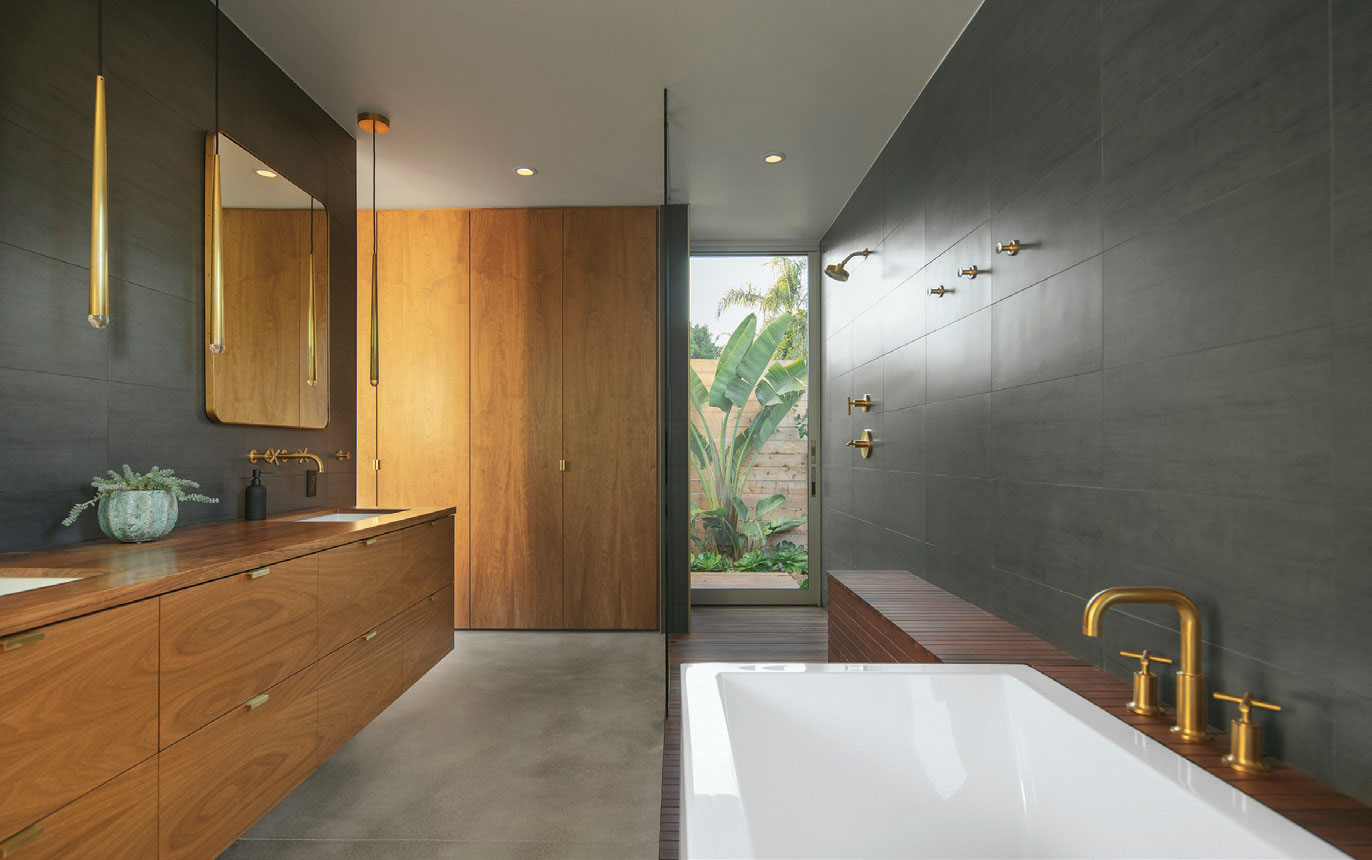