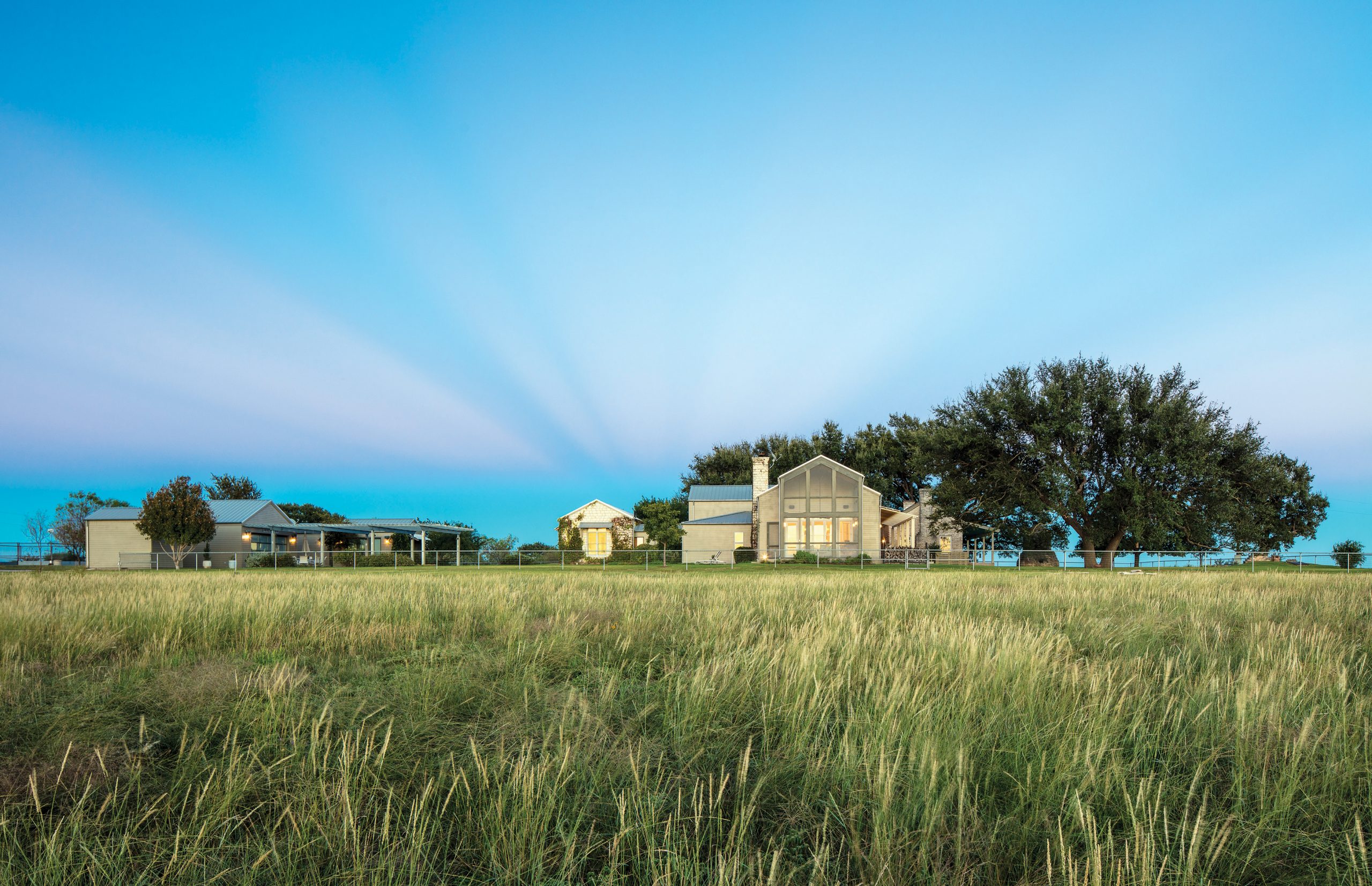 Throughout a 35-year collaboration with the original clients, Stephenville Ranch has grown from a small Cumberland-plan ranch house to a modern home with outbuildings and dramatic views across restored grasslands.

“Austin is like a Venus flytrap,” says Heather McKinney, founding principal of McKinney York Architects based in Austin, Texas. “Particularly if you’re a Texan. You think of it as a place to go, and then you never leave.” 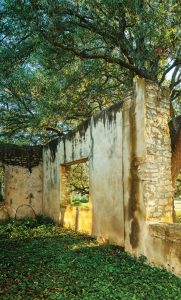 The remnant of a stone wall creates an eastern courtyard and becomes the spine of the home.

Austin wasn’t the obvious choice for the firm she founded 37 years ago. McKinney received her Bachelor of Arts in mechanical engineering from Stanford, then went on to the University of Pennsylvania for her master’s in architecture. She was apprenticing with a firm in Boston when old friends from high school talked her into designing a house for them in Austin. She agreed, but only if she worked from Boston, not Texas. Once she finished the design, her friends coerced her into coming down for six months to oversee the construction. Within a month, she lost all interest in returning to Boston. 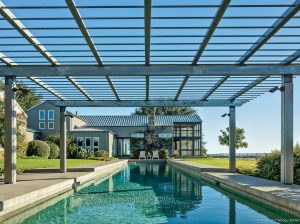 The pool connects the outbuildings to the main house. The two-story, western-facing screened porch provides shade and spectacular views down to the Bosque River, where migratory birds gather.

“Everyone here was so enthusiastic,” she says. “Everyone had a dream; everyone had a plan. It was such an optimistic, upbeat, flat-earth kind of city where you could get involved in anything, and I thought, ‘Wow.’ It was a city that was about to bust open.”

The house won an AIA Austin design award and launched McKinney’s career. She’s continued to be a leader in the community, winning numerous awards and committing the firm to pro bono projects. In 2020, she received a medal for Lifetime Achievement from the Texas Society of Architects. 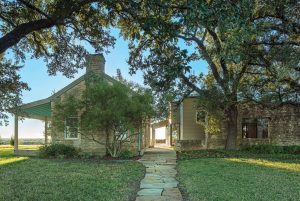 In traditional Texas style, the porch ceiling on the historic ranch house is painted robin’s-egg blue, which is meant to deter wasps from nesting. Photos: Patrick Wong

“That award is usually — well, always — given to old white guys at the end of their careers,” McKinney laughs. “There’s only been one other woman who’s received it. So it was long overdue for a woman, or someone other than an old white guy, to receive it, which made more of a splash than usual.”

McKinney became an architect at a time when it was still unusual for women to enter the profession. But she’d known since the age of 10 what she wanted to do. “My parents built two houses within the space of five years,” she explains. “One of the architects lived across the street from us, and I got to see something spring from the brains of the architect and my parents, and become something real that you could inhabit. What could be more wonderful than to have objects out there that have given such sustenance to people? For a career, there aren’t many people who make things. Most people trade things. I’ve talked to a lot of people, and some just stumble into the profession, but others know from the beginning.” 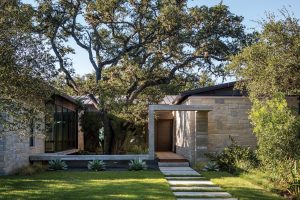 The home at Ridge Oak uses traditional Texas materials on its exterior.

McKinney chose the University of Pennsylvania for her master’s because of the presence of Louis Kahn, one of the 20th century’s most influential architects, revered not just for his work but for his innovative thinking. Though he died during her first year, he often held his graduate classes outdoors, and first-year students like McKinney could listen to his desk crits (critiques of students’ projects) and witness him drawing over students’ work. 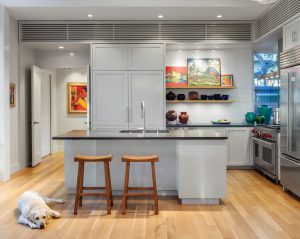 The owners’ art collection takes center stage, even in the kitchen, where clean design and a combination of artificial and natural light allow the colors to pop. Photos: Thomas McConnell

Today, McKinney York Architects seeks to create residential and commercial buildings that serve and inspire. “We make spaces that bring people together. The idea is that we believe in the unlimited potential of architecture to inspire and create community,” McKinney says. “At the heart of it is creating spaces that will resonate with people and make them feel like they belong; it’s their context. We spend a lot of time just listening to our clients, trying to be still and let their voices come through, so that when we finish each house, it’s the embodiment of the client, and what we’ve done is find an elegant way to express that.” 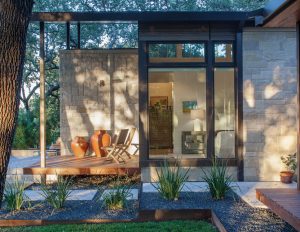 Floating decks allow the trees to prosper, giving the house a zen-like feel.

As a result, each project takes on a life of its own, and sustainability has always been a major element of the practice, along with using local materials and artisans. “It’s part of our DNA,” McKinney says. “When you use local artisans and materials, the building is more anchored in its place. So in Austin, you’re going to see a lot of our projects using limestone, native stone, and those skinny metal roofs that are part of the architectural heritage of Texas. It’s not just about materials, it’s that the regional DNA is timeless and can be put into new work in a refreshing way.” 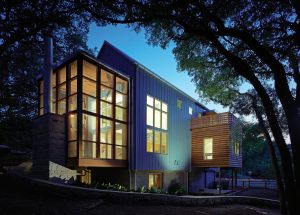 At Robbs Run, a wood-clad “messy room” is used for the owners’ creative activities, from artwork to flower arranging. A fireplace warms the double-story screened porch, allowing it to be used year-round. Photo: Thomas McConnell

At the award-winning residence Robbs Run, the site — in one of Austin’s older, more established neighborhoods — consisted of a small house surrounded by trees. McKinney chose to design within the existing footprint, but rather than allow that to dictate a boxy form, she created two identical peaked-roof elements, which she describes as “Monopoly houses,” joined by a glass slot. Each of the elements is painted an almost imperceptibly different shade of blue. 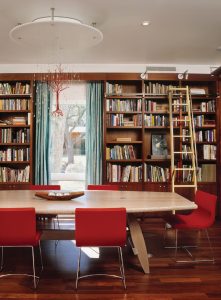 A combination library and dining area is illuminated by a red “tree,” dripping with crystals and blue light, by Laura Garanzay and Katelena Cowles.

“Robbs Run was kind of our breakout project,” she says. “It was one of the first houses rated five stars for sustainability by the city [in 2006]. It has a great envelope, solar, rainwater collection, and it has a really interesting mechanical system. Now, of course, technology and building materials have so improved that we wouldn’t consider it at all cutting edge. But at the time, it was.” 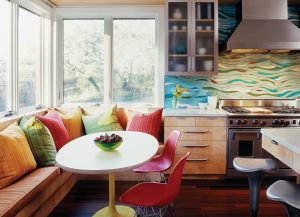 The kitchen dining nook illustrates the Austin, Texas, vibe, with a bright glass backsplash by Laura Garanzay, a Saarinen tulip table painted in Mini-Cooper yellow, and space for socializing while cooking.

Another landmark project has been underway for decades. One of her original clients inherited Stephenville Ranch, and McKinney has restored a derelict 150-year-old Cumberland style ranch house, built a modern wing incorporating the wall of a burnt-out shell of an addition destroyed some 60 years before, and added more outbuildings.

“It’s like a pearl that has more and more layers,” she says. “You get these long vistas and sunrises and sunsets, with that kind of low light rushing across the meadows, because they restored the ranch to its original grasslands. It’s so dramatic. Daily it feels different there — you can see weather coming.” 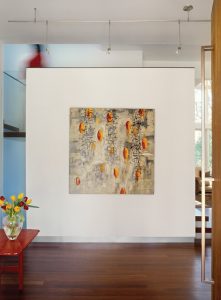 Another project, Ridge Oak, was designed to accommodate remarkable old trees on the property. “There’s a bit of Asian influence in the way it seems to float in places. That was driven by the oaks. We cantilevered the house and the decks to allow the roots to grow and get air and water,” Mckinney explains. The owners have a collection of colorful School of Paris paintings, which called for quiet interior spaces that allowed the art to stand out.

Something McKinney is deeply proud of is the firm’s pro bono creation of two small houses for Community First! Village, a planned community for previously homeless people that’s grown to nearly 150 dwellings ranging from architect-designed small houses to tents to mobile homes. 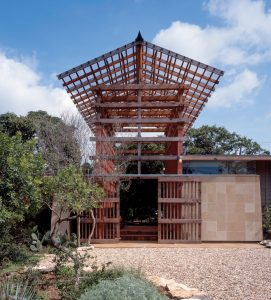 McKinney has recently stepped down as president of the firm. “For much of the life of the firm, I was not just the rainmaker, but I drove the design in a very singular way,” she says. “Then I learned how to collaborate better, and I learned to let go and be more of a mentor, to be able to help the design be more cohesive, kind of clean up things that were extraneous to it, and let it be as simple as possible.” 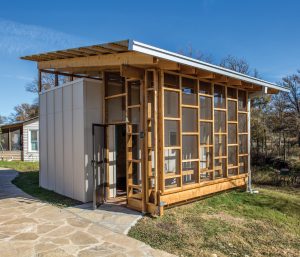 McKinney York Architects makes sure to take on pro bono work. This tiny house is one of two prototypes the firm designed for formerly homeless residents of Community First! Village. The sustainable features include a porch to pull in prevailing breezes and a double roof to combat solar heat buildup. Photo: Thomas McConnell

The firm is now completely collaborative. And she says she loves the luxury of being able to do Louis Kahn-style desk crits. “We really buy into the idea that design is always better when we work through problems together,” she says. “Inevitably, we get kind of crazy bouncing ideas off one another. It’s not just that the design gets better, but the constraints, the things that we were most anxious about, turn out to be making lemonade out of lemons. That’s the crux — the solution is so much stronger because it’s something we solved together in an unexpected way.”