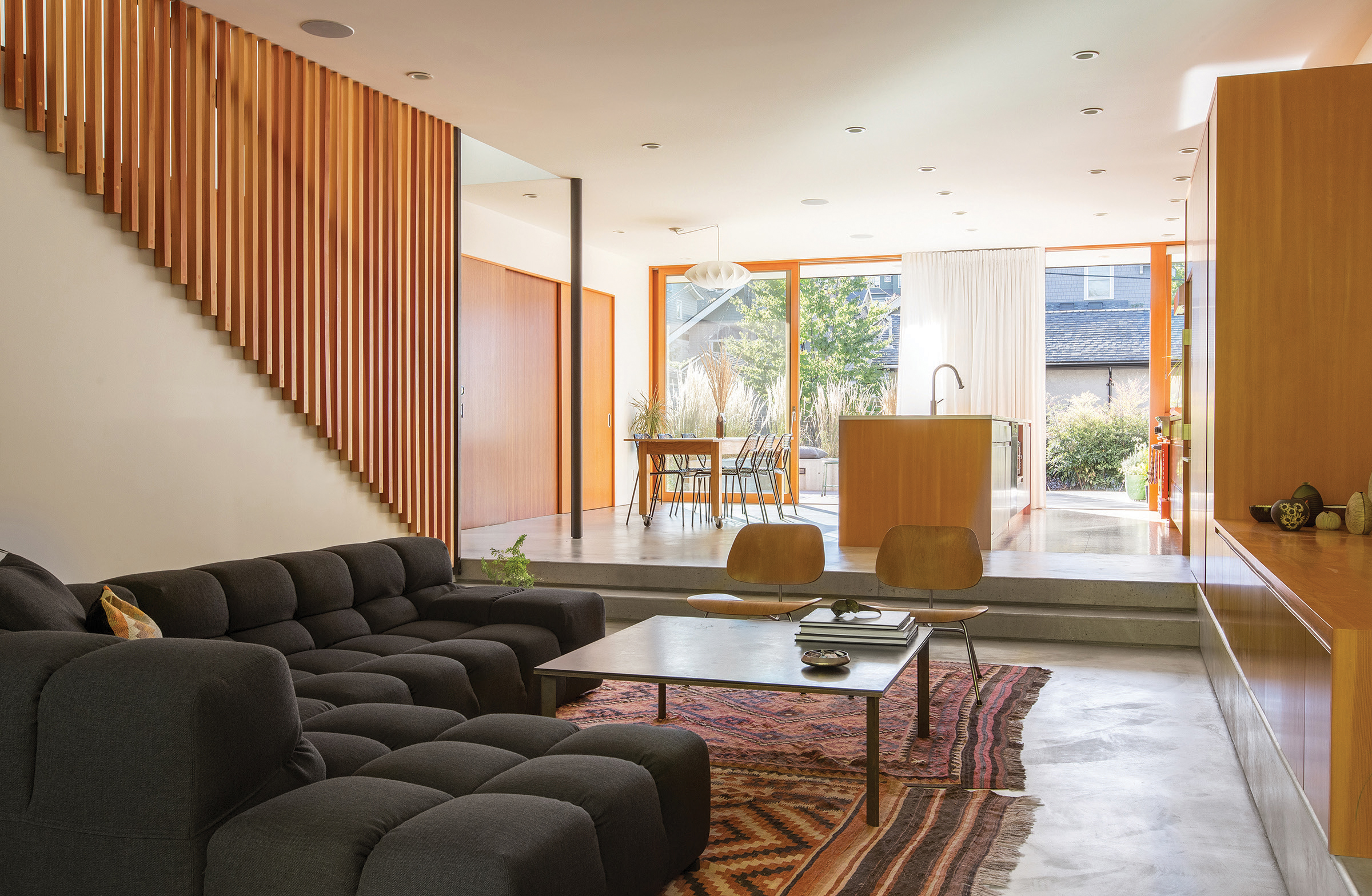 The east and west portions of the home are open to the outdoors through floor-to-ceiling sliding glass doors framed in vertical grain fir. The cork tile floor is from Globus Cork, and the cabinets are from IKEA.

SHED Architecture & Design is a bit of a maverick in today’s design world; they hue to a pragmatic rather than a conceptual line.

That’s no accident. Based in Seattle, Washington, founders Prentis Hale and Thomas Schaer met while pursuing their masters in architecture at the University of Washington’s College of Built Environments, where the emphasis was less on theory and more on how things work. One influential professor was the late Andris Vanags, whose courses concentrated on such practical design/build matters as how frames are constructed, and how materials work, and why they fail. 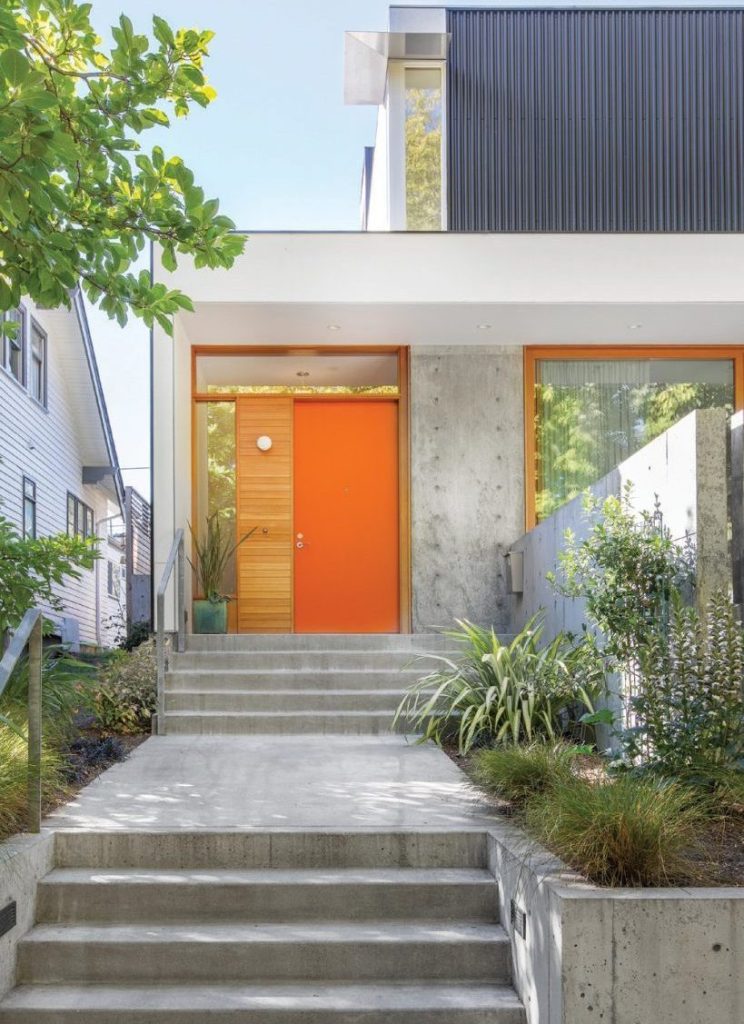 The Capitol Hill House is an efficient and economic interpretation of a classic Seattle home, built on a tight 40-by-120-foot lot with multi-unit neighbors on either side. The corrugated matte black metal siding is Nu-Wave from AEP Span. The wood siding is sustainably-sourced fir, and the colored panel from HardiePanel is engineered to withstand the Pacific Northwest climate. 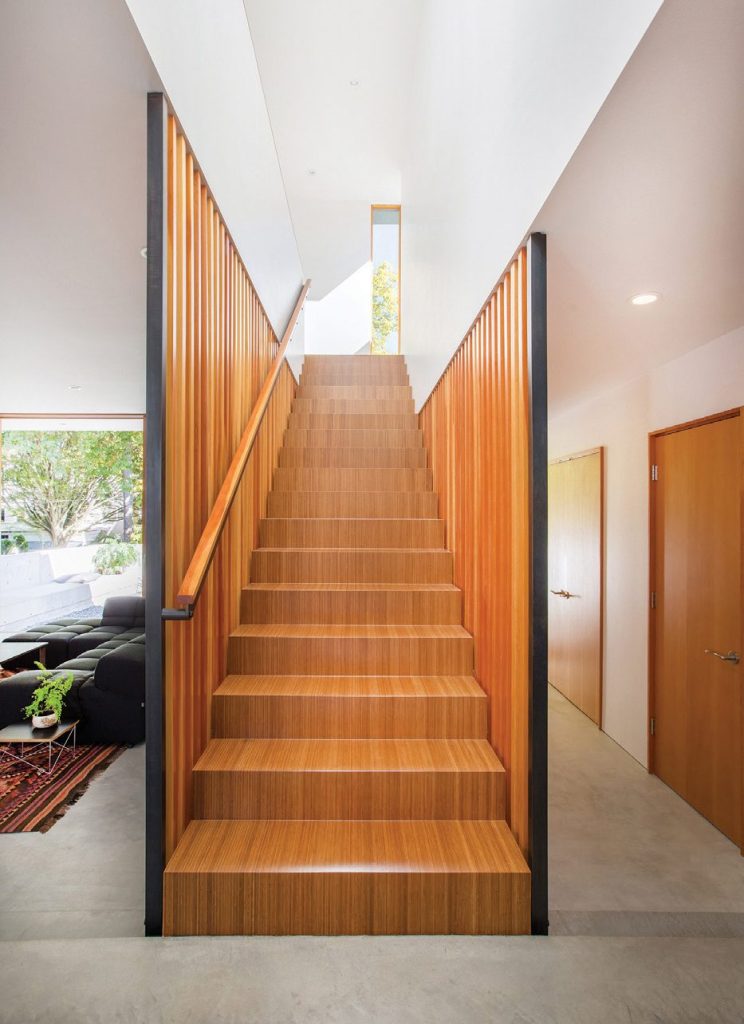 The warm wood stairway contrasts with the elegantly simple living area. The treads and risers are chocolate bamboo ply, and the screen is Douglas fir. 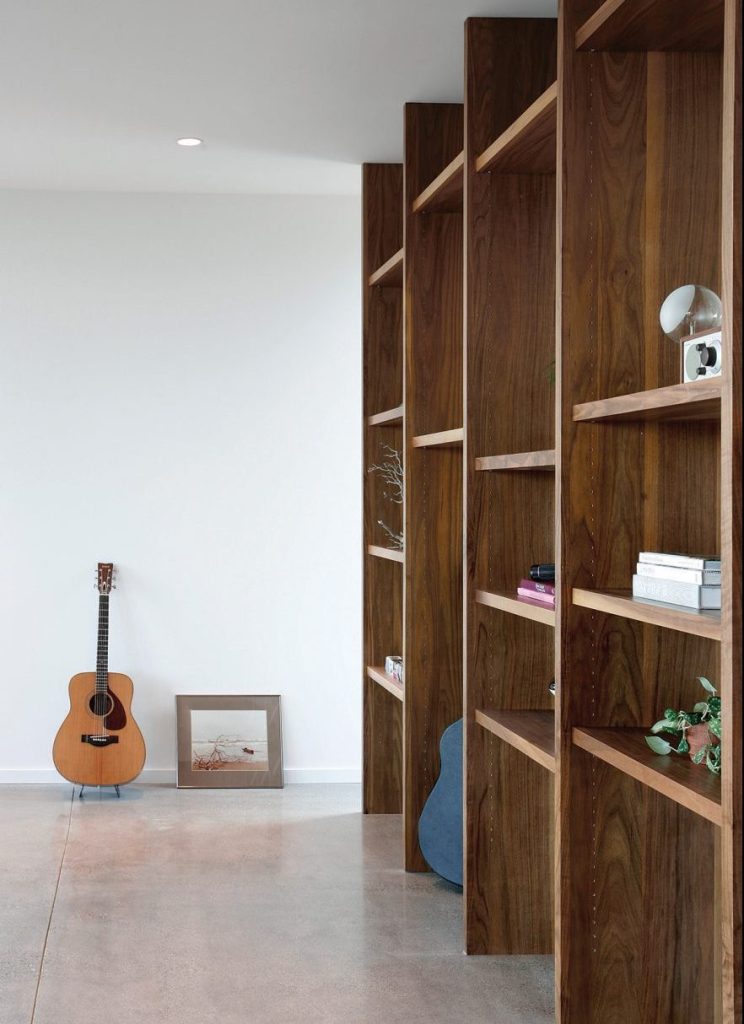 The walnut cabinets are from Big Branch Woodworking. The concrete floors are finished in ArmorClad by Dayton Superior. Photos: Mark Woods

That’s not to say SHED’s houses aren’t beautiful and unique, because they are. But they’re created by people who also know from experience how to build a house. And at heart, SHED is deeply dedicated to pushing the boundaries of sustainability, leading to homes that are efficient, precisely detailed, and responsibly designed.

“To be clear, neither Thomas nor myself are licensed architects,” Hale says. “We formed the company right out of architecture school and started as a design/build company. We never took that traditional path, so some 24 years later, we’re leading this firm, but are not licensed ourselves. Our partners are licensed.” 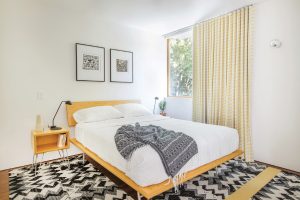 The design reflects traditional homes with the living quarters below and three bedrooms upstairs. Triple-pane windows provide peace and quiet and add to the sustainable envelope, and a framing technique designed to optimize materials reduced lumber usage by 30 percent. Photos: Rafael Soldi 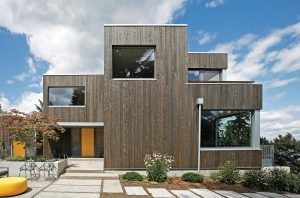 At the Madrona Passive House, a 3.5-inch-thick wrap of Roxul mineral wool insulation keeps the interior temperatures pleasant. The siding is sustainably sourced cedar, and the modular green roofing system is from LiveRoof.

Ask what SHED’s philosophy is and you’ll be met with some hesitation. “We really struggle with this,” Hale says. “We don’t like to come up with grandiose statements, so it’s been a stumbling block. We do believe strongly that our work is grounded in a pragmatic approach to solving design problems. And that if one focuses on those things, you do create good architecture and unique architecture, and you can do works of a high quality that will provide many years of use — and they’ll also end up being beautiful.”

“I feel like we’re practicing a trade,” Schaer says. “It’s really like the old days, like a tailor, where you’d come and get a suit made. We just make better suits than most people. We take our trade seriously, and we’re paying attention, but we’re not making a Versace showstopper that gets worn once or twice. We’re more interested in pushing forth the dialogue of what a sensible cost of a building is in the Northwest. So you won’t see a lot of heroic cantilevers or under-eaves that are just aimed at some kind of a statement. It’s not like we don’t get caught up in aesthetic things, moments where we’re knowingly trying to achieve something architectural that’s not purely a pragmatic response. But we try to make those moments the exception rather than the norm.” 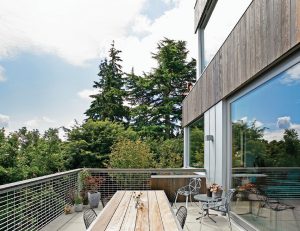 Concrete pavers from Opus One Solutions line the terrace, which overlooks the surrounding hillside.

These days, SHED’s potential clients, for the most part, understand that the firm’s commitment to sustainability results in efficient houses that are no larger than they absolutely need to be. People who want sprawling, vanity-driven mansions get referred elsewhere. Of course, every once in a while, circumstances cause a project to grow.

“A few years back, we really tried to say we’re not going to do houses more than a few thousand square feet,” Schaer says. “We have not successfully held that line, but the houses above that line have all been for clients who want to go all the way on the sustainability front.” Which, he adds, is how they’re able to look at themselves in the mirror.

A recent client came to SHED announcing that he’d chosen the firm because he wanted to be reined in. Another firm might have said yes to his every desire, but SHED would talk him out of much of the space he thought he needed.

“It’s true,” says Hale. “We’re the type of firm that will do that. Not just because of the scarcity of resources or the impact of it, but because ultimately, we feel it’s a burden to live in a house that’s bloated. It’s just more stuff to maintain that makes you feel bad. In this market, there’s an upward pressure on the size of houses. It’s a battle. We try to make them smaller and net-zero at the minimum. Net-zero now is very achievable. And in our latest projects, we’re trying to figure out how to go further than that.” 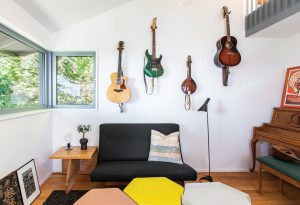 The music room is part of the larger living space and is organized around the central hearth. The colorful Hecks Ottoman is from Blu Dot. 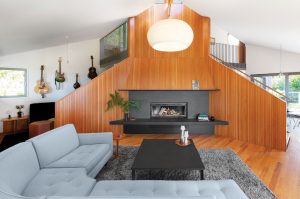 The architects designed the gabled ceiling in the living room to resemble a circus big top. The pendant light fixture is from Graypants. The hearth is Linear 50 from Renaissance Fireplaces. 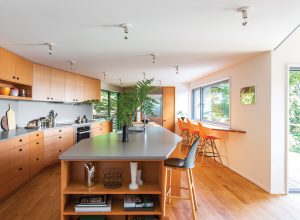 Countertops in the light-flooded kitchen are Sleek Concrete from Caesarstone; the butcher block is red oak. 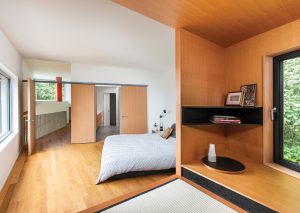 At the pinnacle of the house, the Japanese-inspired homeowners’ bedroom contains a tatami nook and a wooden soaking tub. Photos: Rafael Soldi

Many of their clients are what they call “early Microsofties” or techies who sold their startup companies to giants like Facebook, Google, or Amazon. That’s because what SHED is doing may be compact, efficient, and perfectly constructed, but it’s not cheap. “It’s kind of like building a prototype,” Hale explains. “It costs money to do this. It costs money to have the insulation. We need super-great windows and doors and to have everyone figuring out the engineering. So it’s a luxury product.”

Their ideal project remains one with constraints, for example an odd-shaped urban infill with privacy issues or a client with a somewhat limited budget but a sense of adventure. They’re also enthusiastic about remodels, from which the younger staff learns volumes, as do Hale and Schaer. And what they learn carries over into new houses.

“We do take on new houses that we push as far as we can get up the sustainability ladder, but whose owners are just stretched to the limit to get it done,” Hale says. “So those are the ones where Thomas and I can really say, ‘Nope, this house has to be 1,500 or 2,200 square feet, and this is how we’re going to get you to the finish line and get you an awesome house.’ We try to do a lot of those projects, but they’re tough to get done.” 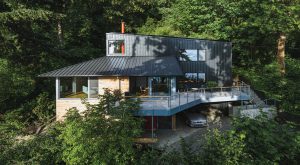 The Me-Kwa-Mooks Net-Zero House was designed for a couple who’d worked in circuses and spent considerable time in Japan. It consists of two volumes, one metal and one wood, united by an orange flue and a west-facing deck. It’s named for the public park at the rear of the house. Photo: Tony Kim

Not only does SHED stay on the cutting edge of advances in materials, but they’ve taken a pretty daring step in their relations with clients. Rather than presenting clients with a finished design or a set of options, they let them in from the start via virtual reality viewed through a headset. In this way, clients can walk through the design as it progresses, keeping the architects aware of what they like and don’t like.

“Instead of controlling their response by only showing them certain views, we’re just going to let them see the whole thing,” says Schaer. “In that way, our clients are very empowered. So that’s a relatively new thing. It’s definitely something that one might question, like, should clients really see everything? Or should we keep them at arm’s length and control the process a little bit more? We just have faith that they’ll make good decisions. It’s an upfront dialogue earlier in the process and that kind of eliminates some questions and surprises that people might have if they haven’t really understood the design.”

The two architects aspire to Passive House certification from the Passive House Institute, as well as meeting the Living Building Challenge from the International Living Future Institute, which aims at housing that gives more than it takes, using the cleanliness and efficiency of a flower as a metaphor. Net-zero is an admirable goal, but it doesn’t include, for instance, the carbon and water used in construction nor the production and transportation of materials. The road to certification is a tough one, and it requires actual, measurable sustainability, not projections. 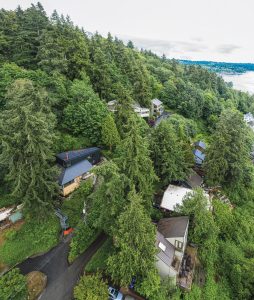 A bird’s-eye view of the house shows its location next to the densely forested Me-Kwa-Mooks Park and provides a look at the steep, triangular lot. Photo: Tony Kim 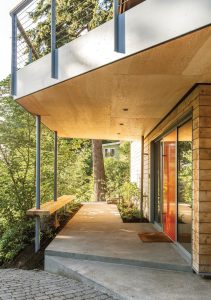 At the top of the entry stairway, a covered bench provides an opportunity to relax and enjoy the view. The LED lighting is from WAC Lighting. Photo: Rafael Soldi 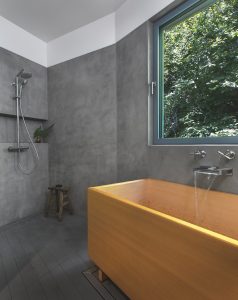 The Japanese-style soaking tub is surrounded by tile from Mosa. Photo: Rafael Soldi

But if anyone can meet the challenge, SHED certainly stands a good chance.