“I always wanted to have them design a house for me,” says Candy Spitzer of her friends, Juan Miró and Miguel Rivera of Miró Rivera Architects. “But as they were getting more famous, I realized that probably wasn’t going to happen.” 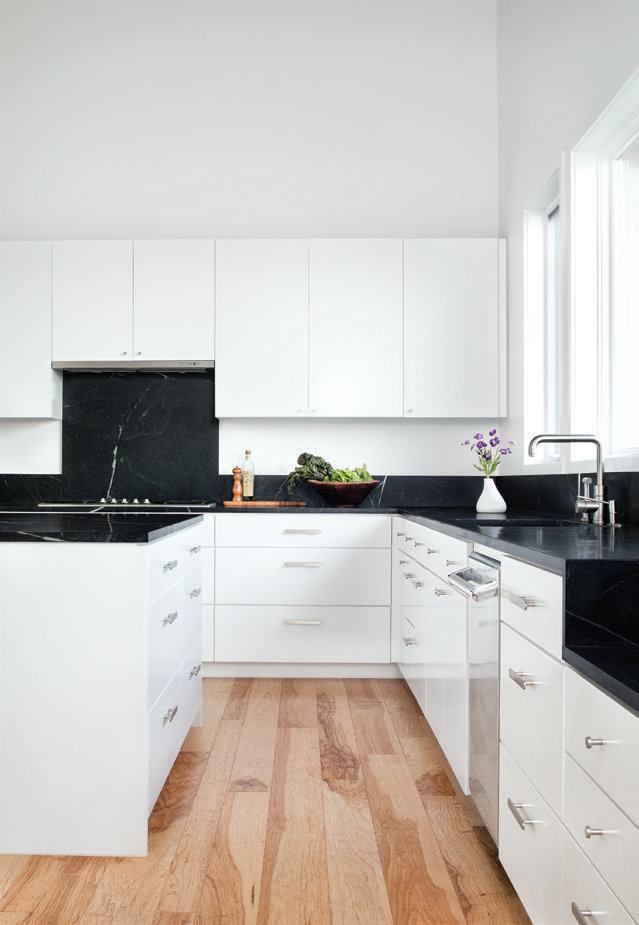 The kitchen’s pecan floors bring warmth to the white space with black soapstone countertops. The cooktop is by Thermador and the fixtures are by Blanco.

Then Spitzer decided to divide a 100-acre property outside of Austin, Texas, and build a prototype sustainable house, which Miró and Rivera agreed to design at the “friends and family discount.” The result is Hill Country, a stunning dwelling that consists of a line of volumes topped by slightly off-kilter roofs that mirror the hill country in the distance. 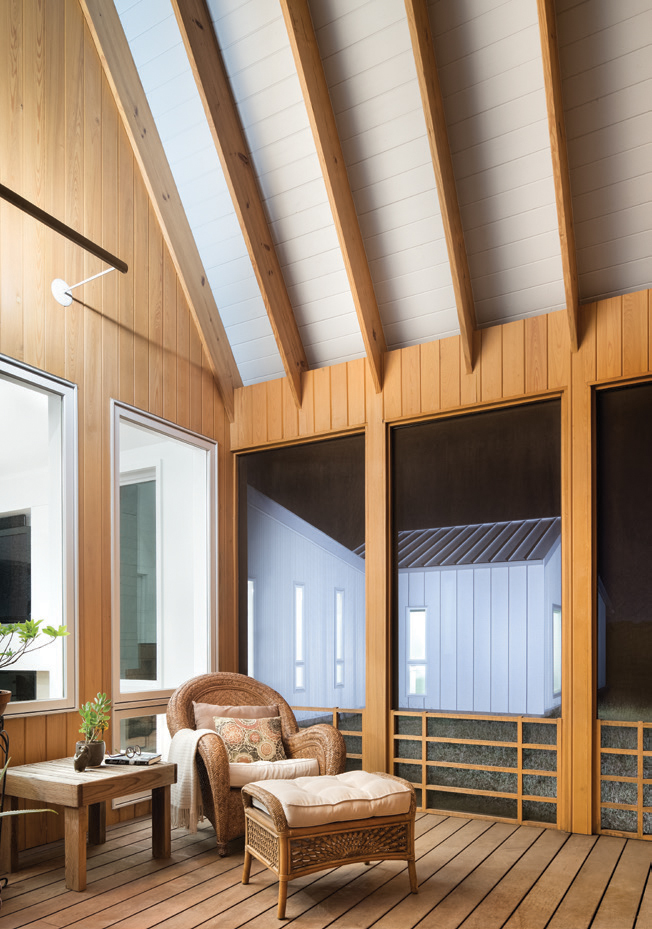 A 30-foot peaked ceiling over the screened porch provides both airiness and an almost church-like serenity. An mix of pecan, cypress, and limestone reflects the Texas landscape and warms the white metal siding.

Miró Rivera has won awards for versatile projects ranging from a footbridge, to the tower and grandstands for a Formula One racetrack, to the campus for a Hindu spiritual group. 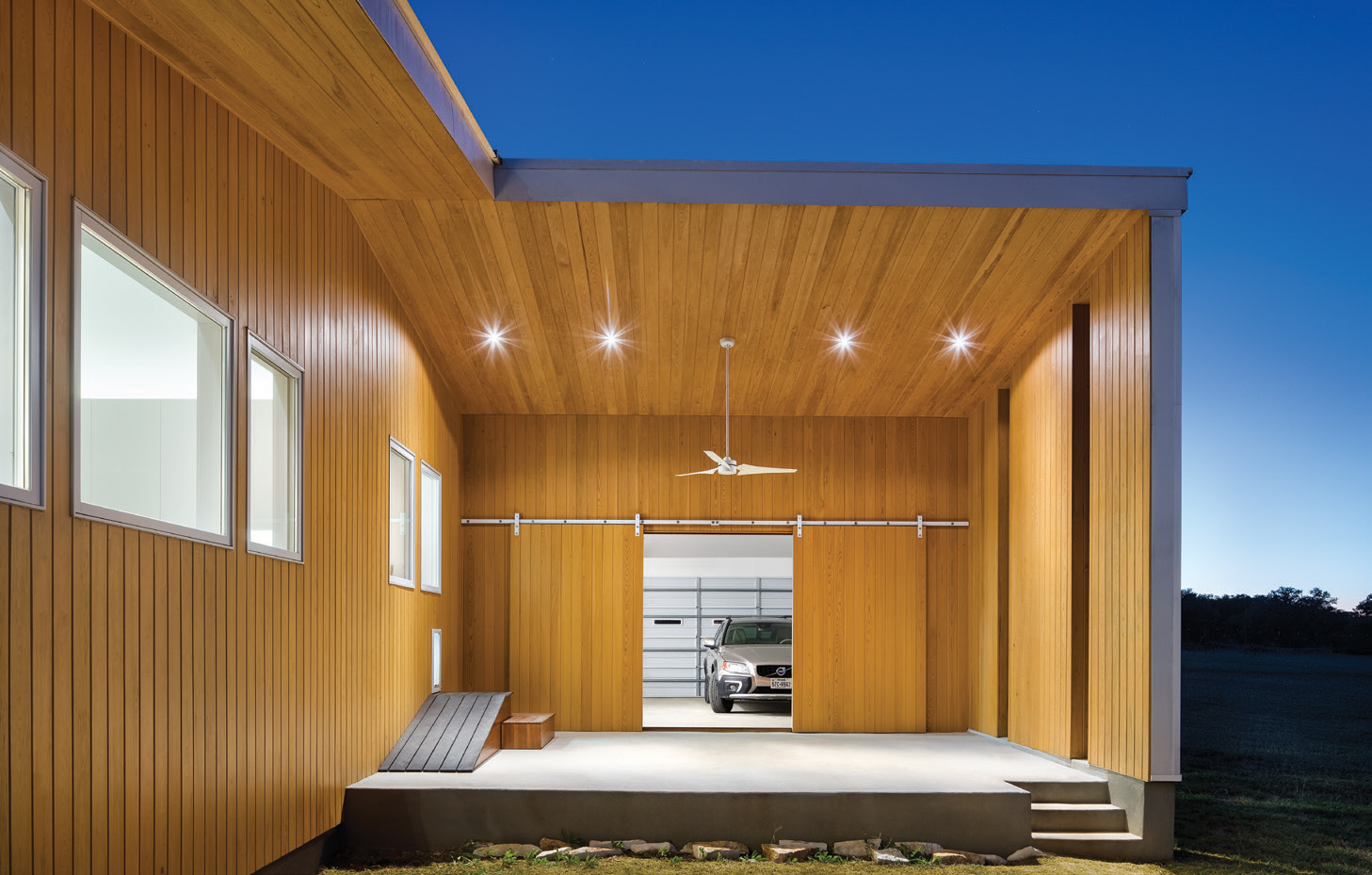 Cypress-lined sliding doors on the garage lead to an open-roofed space that is sometimes an art studio and sometimes a stage for concerts.

They have no immediately identifiable in-house style, beyond working in the contemporary vernacular, but the residences they’ve designed have a through thread of joy in their settings, an openness to nature, and a play of light and shadow. There’s an economy of ornamentation but no lack of warmth.

“We’re always talking like Vitruvius,” explains Rivera, referring to the 1st century B.C. polymath and Roman author of De Architectura. The tome was rediscovered during the Renaissance and inspired Leonardo da Vinci to create his most famous sketch, Vitruvian Man, illustrating the balance of the human form within the eternal geometry of a circle and square. Vitruvius maintained that all buildings should have strength, utility, and beauty. 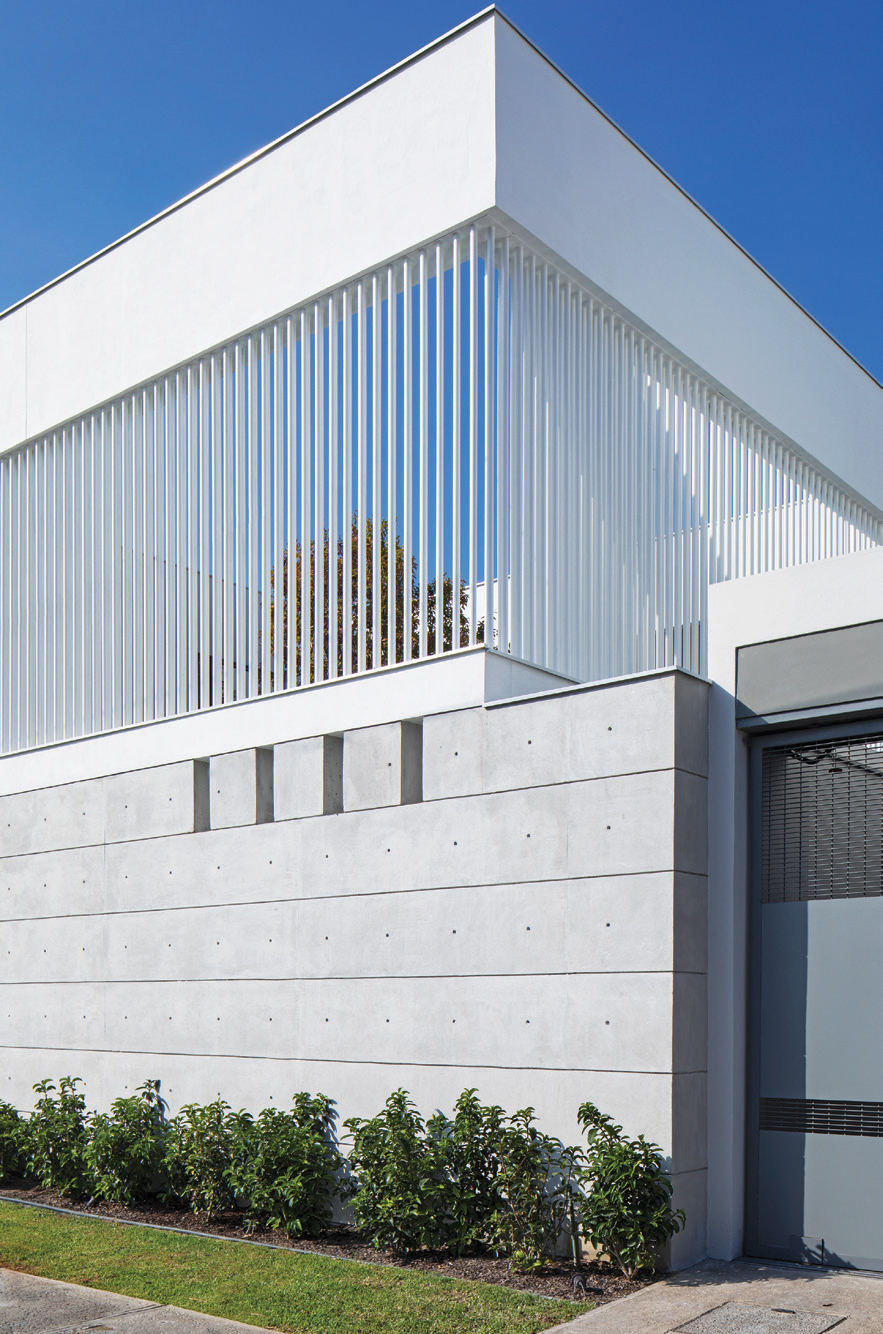 Concrete walls frame the metal garage doors. Privacy and openness meld with the line of white metal piping atop the concrete.

Miró Rivera interprets this as, first, the thinker’s imaginative response to the client’s needs and desires, the site, and the surroundings; second, the builder’s practical considerations, including sustainability and the client’s budget; and third, the artist’s vision, creating something beautifully unique that transforms the lives of its owners. 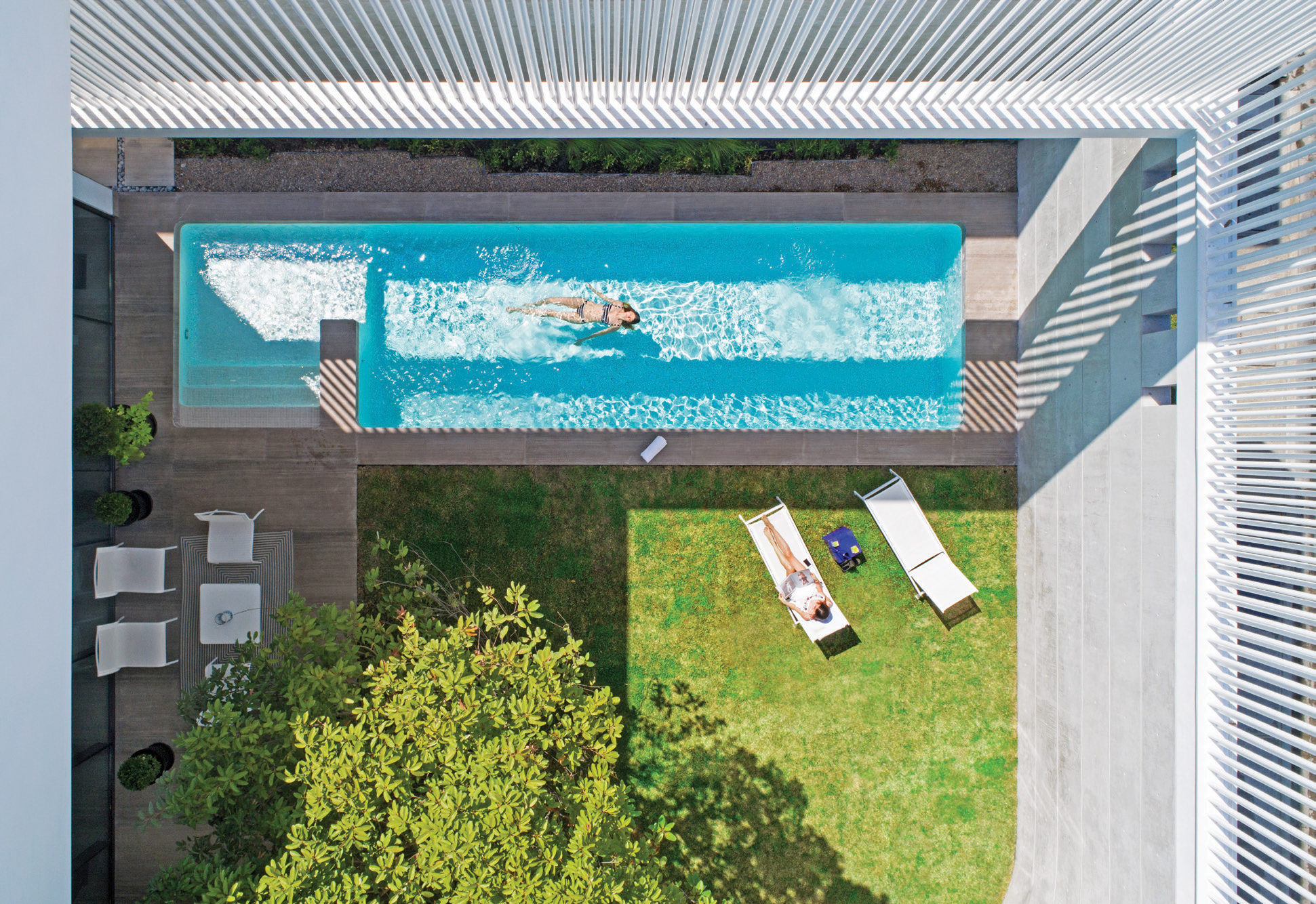 A swimming pool lines one end of the courtyard, which is shaded by an oak tree and the piping-topped exterior walls.

“A building can’t be just beautiful or just functional, you must put it all together,” Rivera says. “We go from the inside out, and from the general to the specific. The first design is a plan for where everything goes, sometimes drawn by hand, sometimes by computer. Sometimes the client says, ‘Yes, we like this plan, but we don’t know what it will look like,’ and we say, ‘Don’t worry, we don’t know either, but it’s going to be beautiful.’” 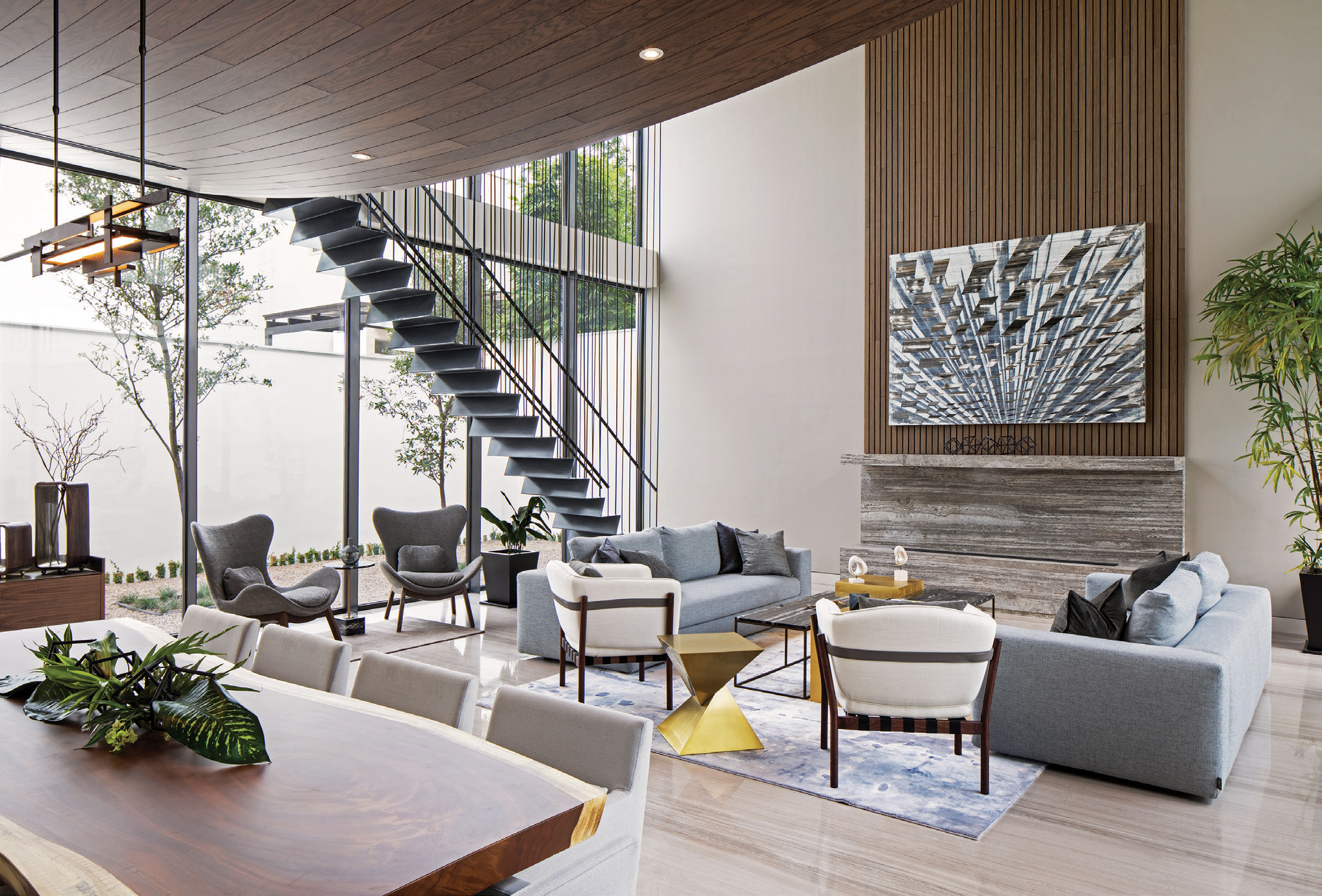 Inside Casa Ithualli, a dramatic curved wood ceiling over the dining room opens to double-height windows. The interiors were designed by Ibarra Aragón Arquitectura. The marble flooring is by Kolorines, and the bent steel-lined staircase leads to a media loft.

The two architects met while working for the celebrated Modernist firm Gwathmey Siegel in New York City. Rivera, who got his master’s at Columbia, was born and raised in Puerto Rico’s hot Caribbean sun and shadow, while Miró, who received his master’s at Yale, was the son and nephew of prominent Spanish architects and spent much of his life in the urban environments of Barcelona and Madrid. Miró married Rivera’s sister, Rosa. They then moved to Austin to oversee the completion of a Gwathmey project, and eventually decided to stay and open a firm there. Rivera followed, and in 2000, Miró Rivera was born, with Rosa working as the administrator.

“Our projects need to make rational sense. So from the beginning we’re thinking about structure. Beauty is when you cannot put anything on or take anything away without changing the outcome of the project. In our projects, we don’t have a single extra column that’s not needed,” Rivera says. “We like glass. Sometimes people will say, ‘We want uninterrupted views and glass with no molding.’ So, okay, we can do that — a trellis or a sunscreen becomes what’s holding the glass, and each little vertical screen is a column, but you don’t see it that way. … it disappears and connects with nature.”

The two architects collaborate on every project. “Juan and I have one office,” Rivera explains, “and we have a table in the middle. When we have a new project, we both go to the site where we get ideas of what should happen, and then we add associates. A project can take two to four years, so sometimes one of us will drop out for a bit and then come back. We start the race together, and then he’ll do one lap, I’ll do one lap.” Also, Rivera points out, the personality of the client enters into the balance. Some clients gravitate more toward Miró, others more to Rivera. 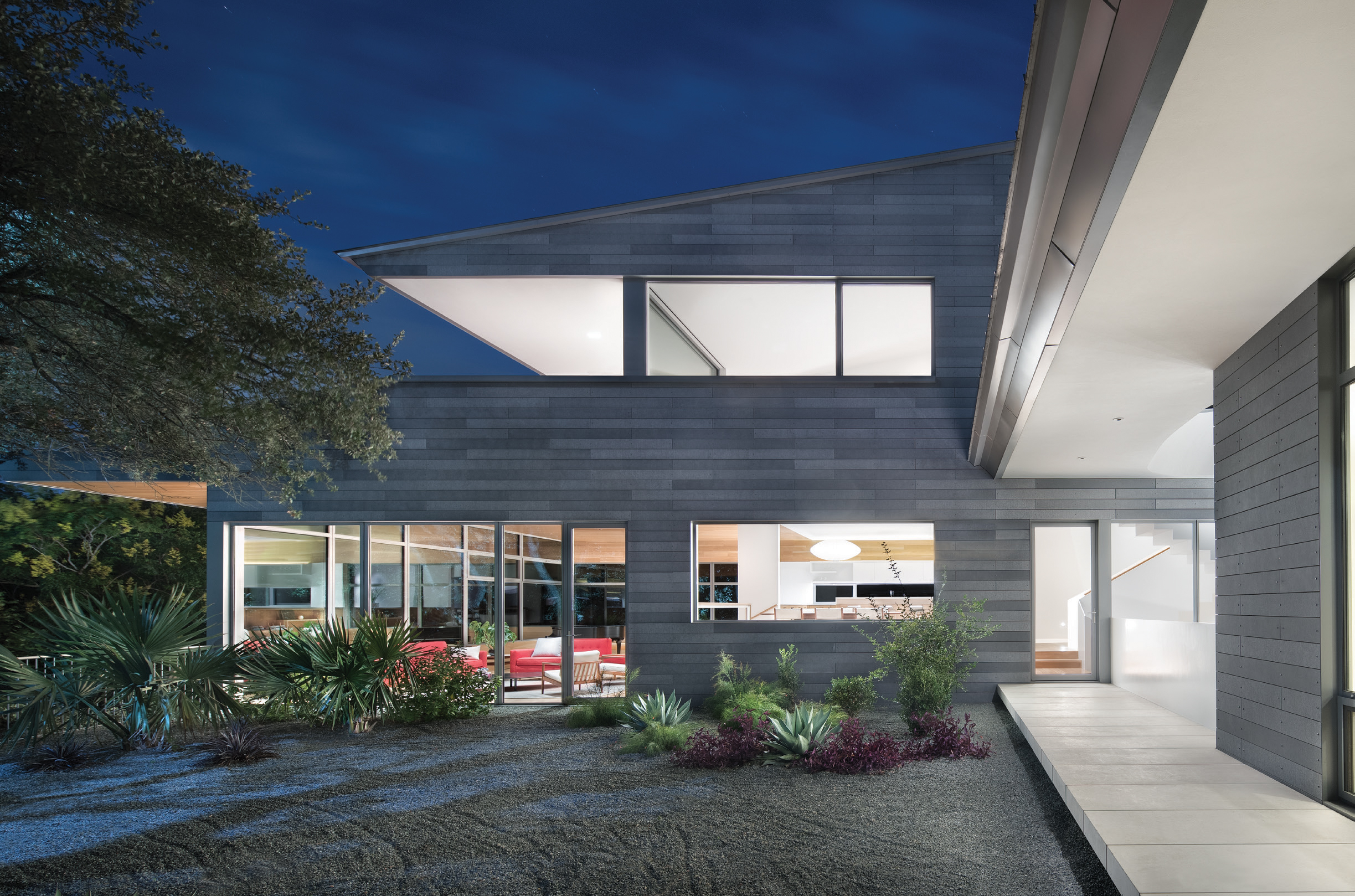 On a steep site in Austin, Texas, the Vista House’s height is imperceptible from the street; the green surroundings and views across the treetops make it one with nature. The concrete siding is Öko-Skin by Rieder. The steel doors and window frames are by Case Window & Door.

“People think we’re all the time creating,” he says, laughing. “No — you have an idea, then you have to meet with engineers and study the soil condition, and the codes, and the spirit of the neighborhood, and so on. So that takes up 99 percent of the time. Little by little, we make decisions.” 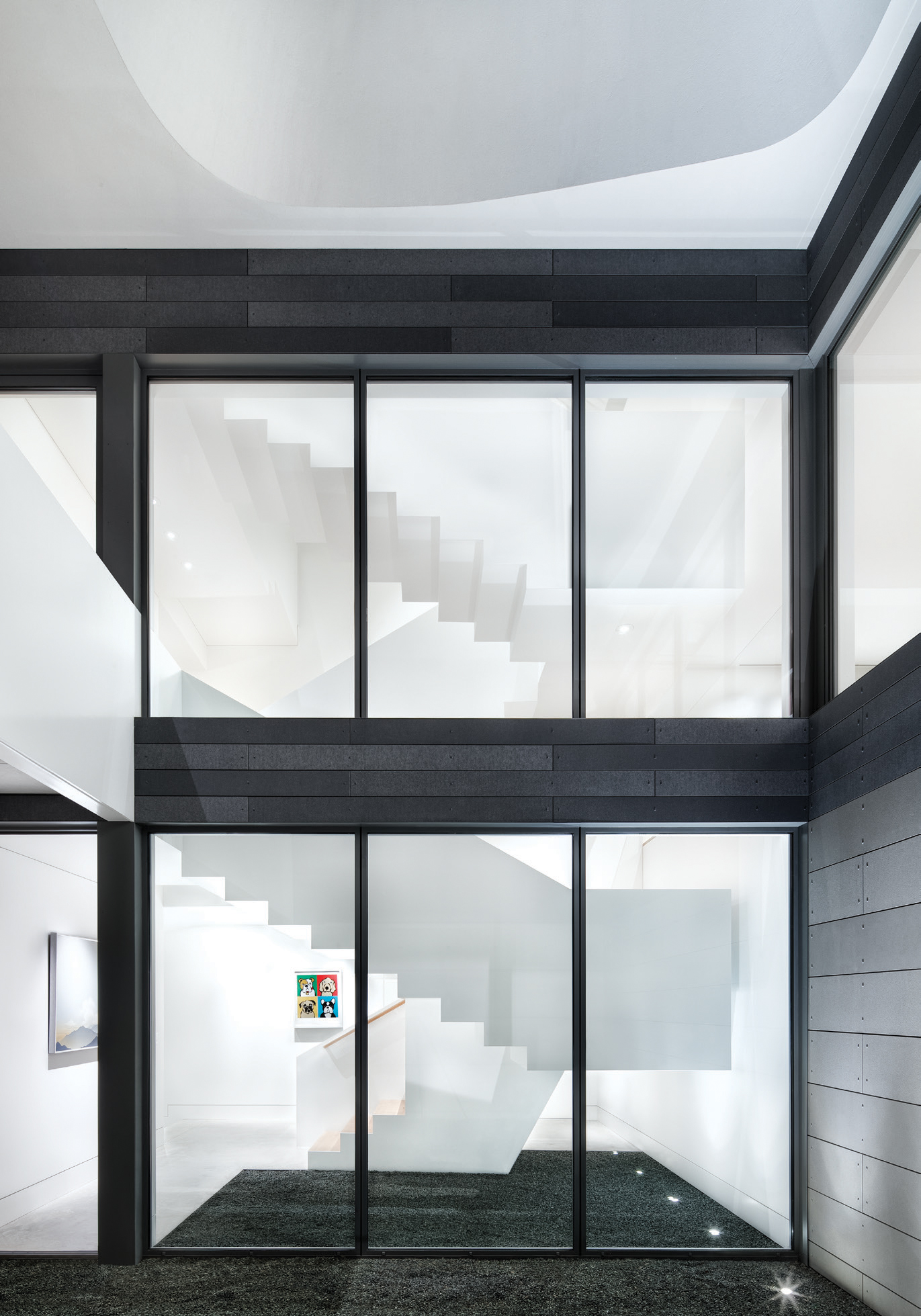 The three-story staircase is the heart of the house, connecting all its elements. It’s constructed in 5/8-inch steel from Adrian Herrera Ironworks.

The firm has had a mix of clients with budgets from unlimited to tightly constrained. The Vista House had a generous budget, which, Rivera says, allowed them more freedom with the flow and the addition of refined details. But the owner, the daughter of an architect, has a fairly modest lifestyle and didn’t want anything particularly showy, even though she often entertains for a nonprofit with which she’s involved. When the architects first visited the old house, which they eventually replaced, she insisted they follow her up onto the roof. “I want this view of downtown for my office,” she said. 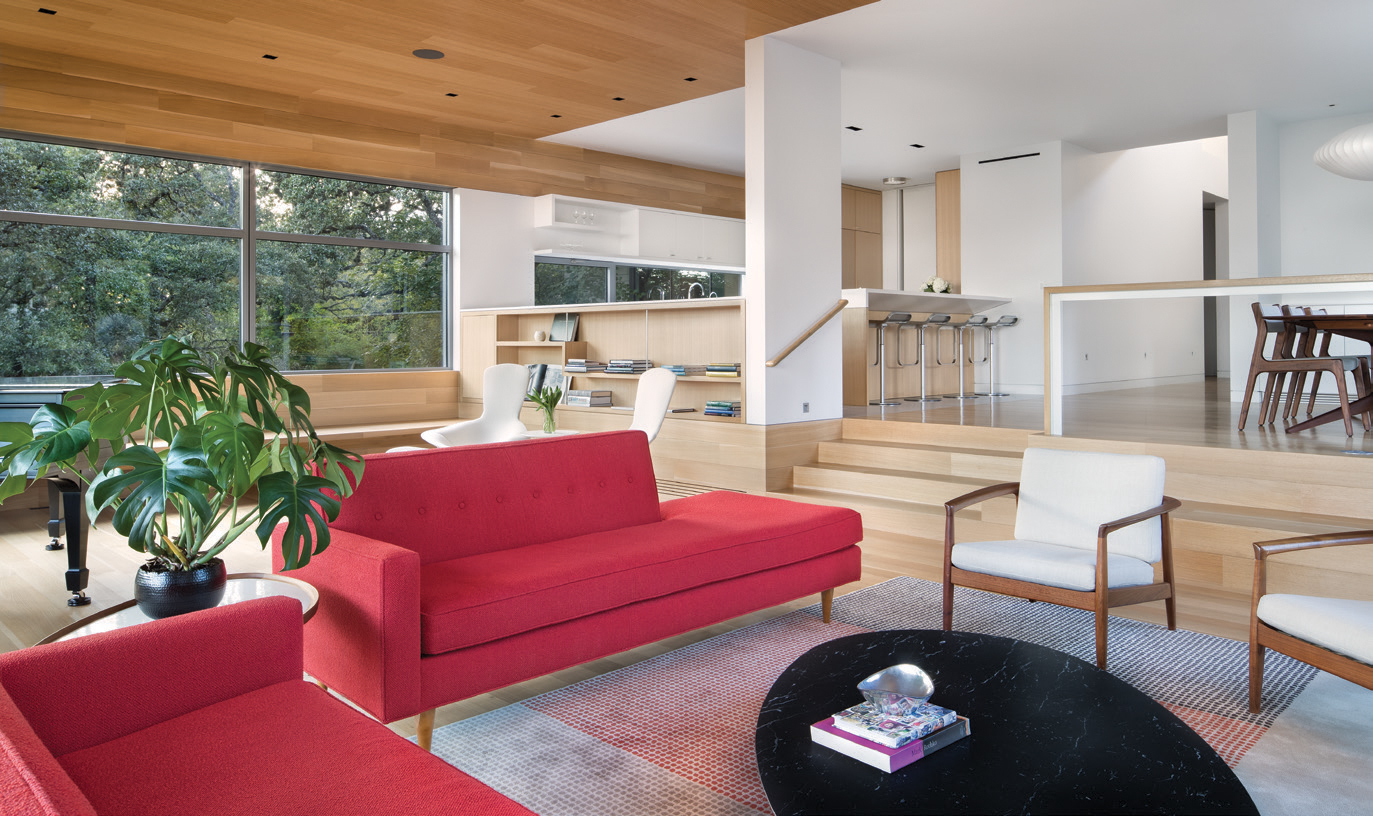 The living area is designed to be at once comfortably warm and to accommodate large gatherings. The sofas are from Design Within Reach, the coffee table is Scighera Oval by Cassina, and the dining table and chairs are by De La Espada.

“We made different designs,” Rivera recalls, “some with the bedroom upstairs with the view. But as far as I know, you sleep with your eyes closed. So in the end, the office went upstairs.” 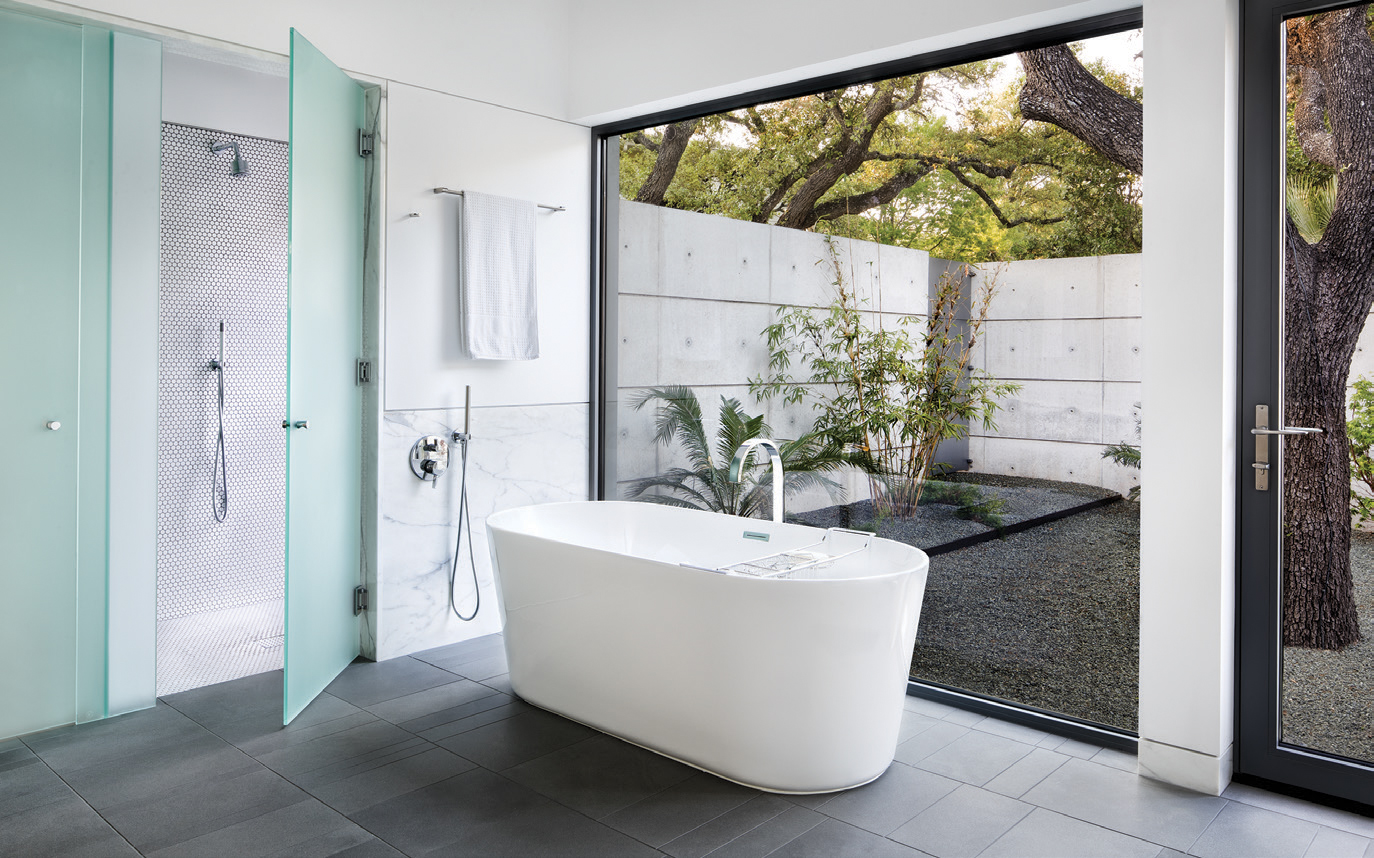 The master bathroom, as well as the shower, opens onto an enclosed courtyard framed in oak trees. The bathtub is Elsa by Blu, the stone floor is by Pietra Sirena, and the fixtures are by Dornbracht. Photos by Paul Finkel | Piston Design

As one example of a commercial project, Casa Ithualli was completed for a university in Monterey, Mexico. The university raises scholarship money by commissioning top architects to design houses, which are then offered in a national lottery. While most of Miró Rivera’s designs are geared toward bringing the outdoors in, this design created a closed exterior, with the sense of a natural atmosphere via a courtyard. From the exterior, it’s obvious the house is beautifully designed, but the interior remains enigmatic. 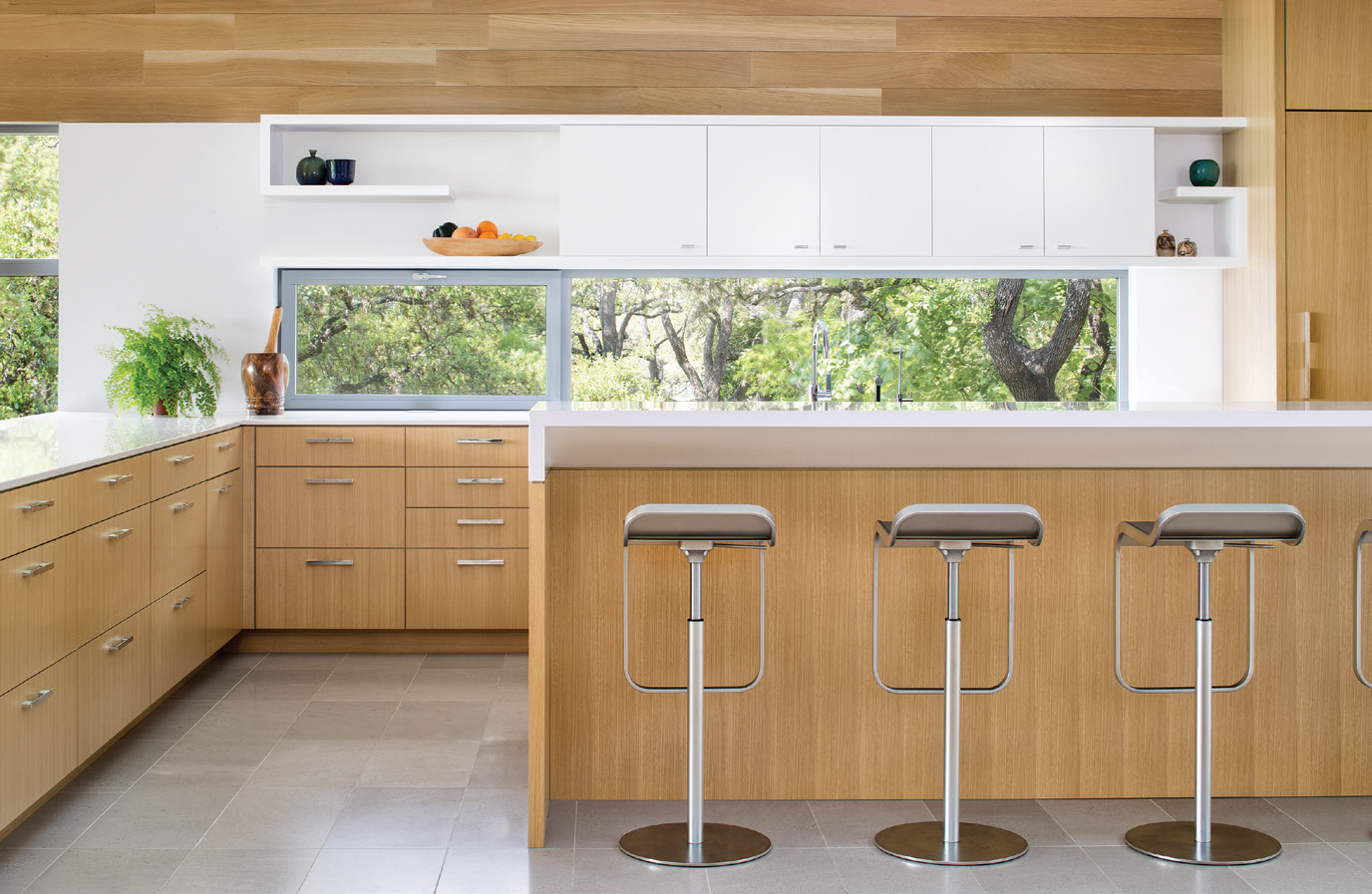 The sunny kitchen in the Vista House has smoke limestone floors, gleaming white Silestone countertops, and glass windows as the backsplash — all warmed by white oak millwork. The counter stools are LEM Piston from Design Within Reach.

For a couple in Houston, Texas, the firm not only designed the house but everything in it, from the furniture to the plates and silverware. The couple had brought some colorful folk art swings from India, which were promptly nixed by the architects, who instead designed slat wood swings that perfectly fit the sophisticated design. They’ve added built-ins for other houses, but aren’t enthusiastic about getting into interior design, which they regard as a separate profession. 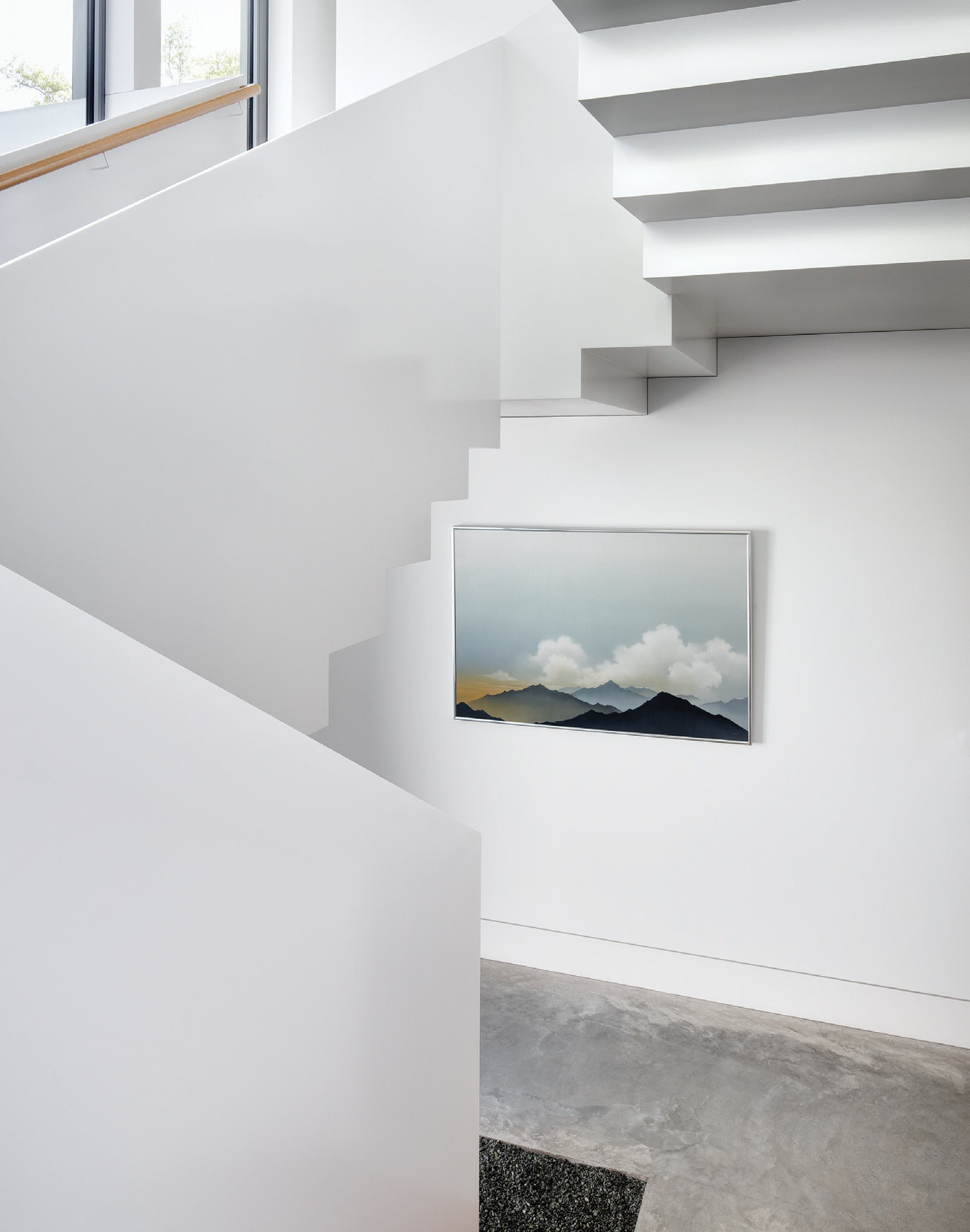 The steel staircase is both sculptural and the perfect gallery for art. Photos by Paul Finkel | Piston Design

As for the future, Rivera says the goal is to expand to larger projects while maintaining the firm’s intimate scale. “We can’t do all the work in the universe; we want to do a few things and do them right,” he says. “In the book we say, this isn’t the culmination of what we do — this is the foundation of what we’re going to do. The best is coming.” 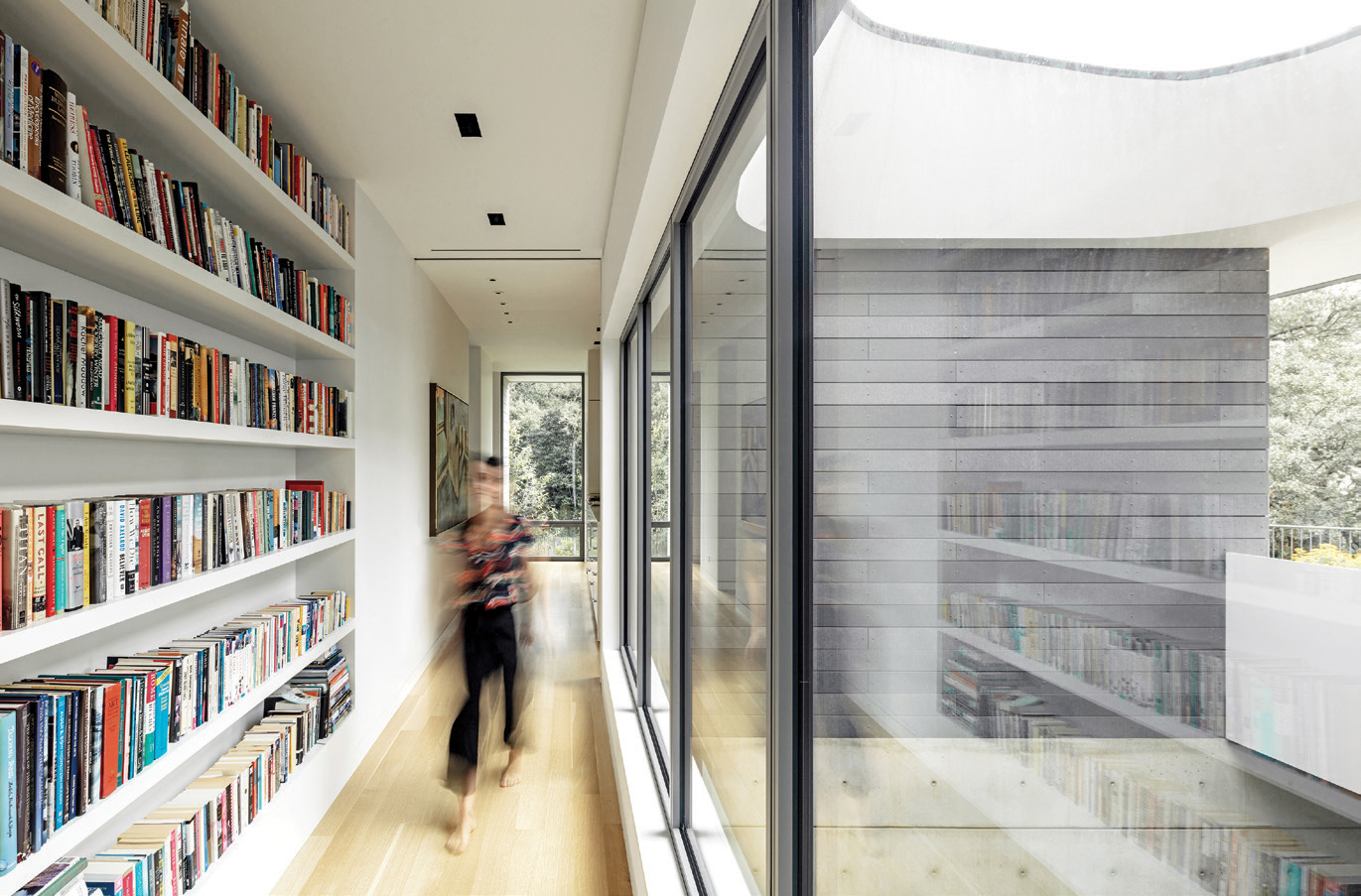 A book-lined bridge leads from the foyer to the master bedroom. White oak floors add to the lightness of glass windows lining the corridor. Photo by Ibai Rigby

But as for the clients who’ve formed the foundation for the future, no one is complaining.

“I love living in this home,” says Spitzer, who’d initially planned to live for only two-and-a-half-years in the house — it was meant, after all, to be a prototype for a neighborhood of like-minded residents. Now, she’s too comfortable to leave. “It has everything we asked for, a sense of living outdoors, but with all the comforts. The house is grounded, but it feels almost like it’s floating. And I’m so grateful I got to know them professionally — to experience their level of artistry,” Spitzer says. “I can’t imagine working with anybody else.”