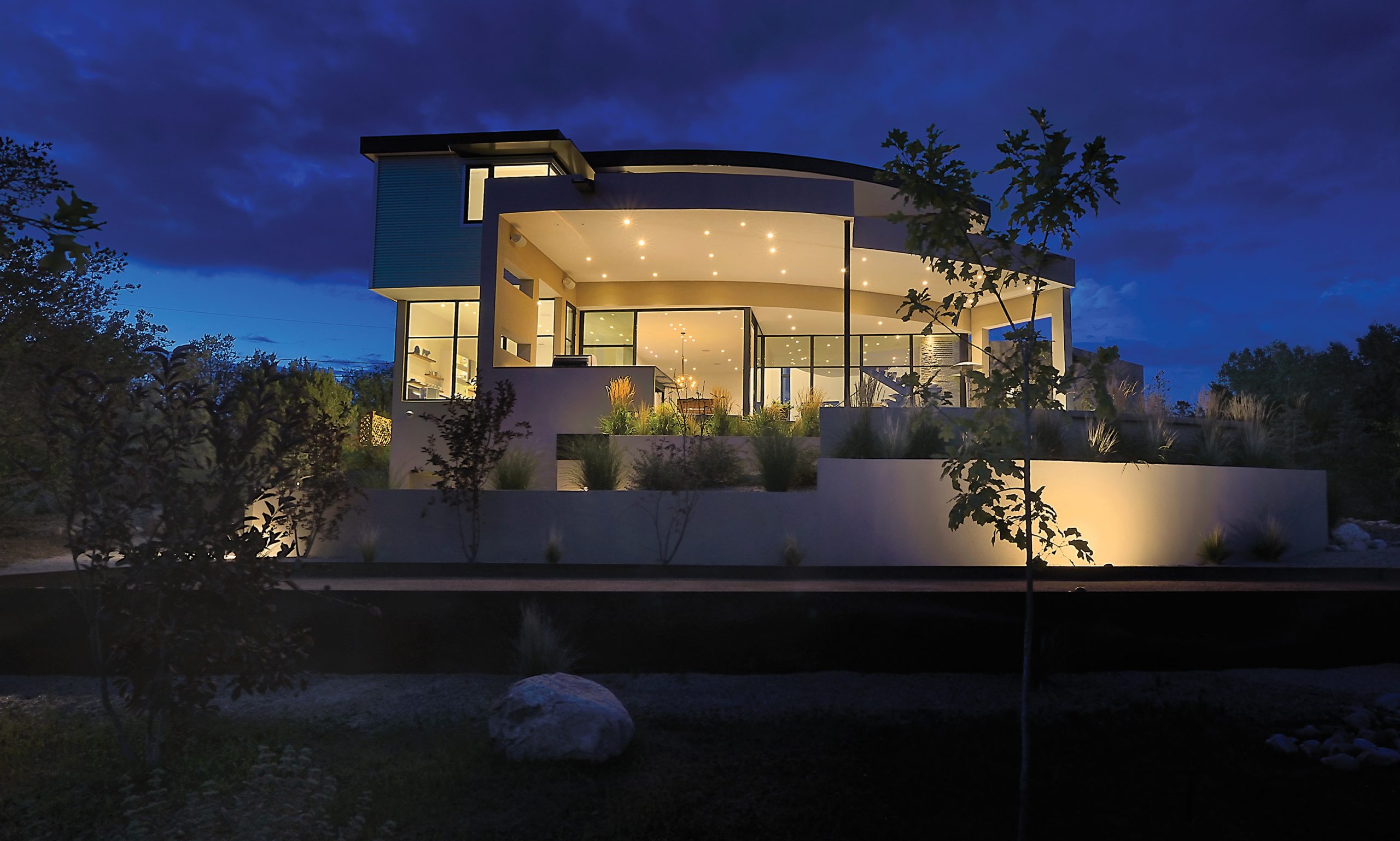 In the Lovato House, three stories provide the homeowners with views from an otherwise tight city lot.

Architecture with a capital A is what Craig Hoopes has always aspired to at his Sante Fe, New Mexico, firm — not simply building. Yes, a house is primarily a shelter, built to satisfy its owner’s needs, but he believes it can also be a transcendent design that transforms the lives of its inhabitants — whether or not they’re conscious of the degree to which that’s occurring.

“Our job is to lead our clients to a solution that works for them, and that creates beautiful architecture for the city,” Hoopes maintains. “But it can’t just be a piece of sculpture; it has to be a piece of living art.” 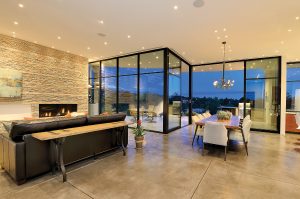 Glass windows and doors from Western Window Systems usher the outdoors into the great room. As with all of Craig Hoopes’ designs, the ceiling and floor materials extend seamlessly from inside to outside.

Hoopes graduated from Cornell University’s College of Architecture, Art, and Planning, where, he says, Le Corbusier was revered as the design god. “The program was oriented around his way of thinking,” he explains. “I didn’t appreciate that as much at the time as I do now. I feel I was able to learn how an architect thinks.”

After graduating, Hoopes apprenticed for several years. Then, in 1983, he joined two other architects to create a firm in Baltimore, Maryland. All was well until 1992, when he visited Santa Fe and concluded he was never leaving. He gave his partners a choice between opening a Santa Fe office or buying him out, and they chose the latter. Within two and a half years of moving, he opened Hoopes + Associates Architects. 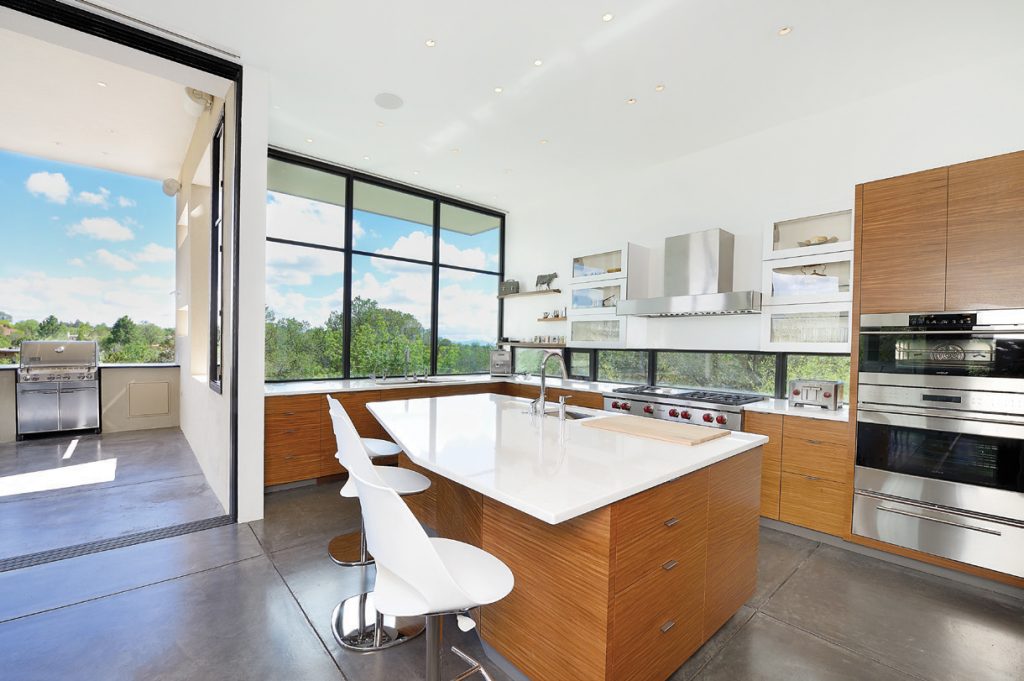 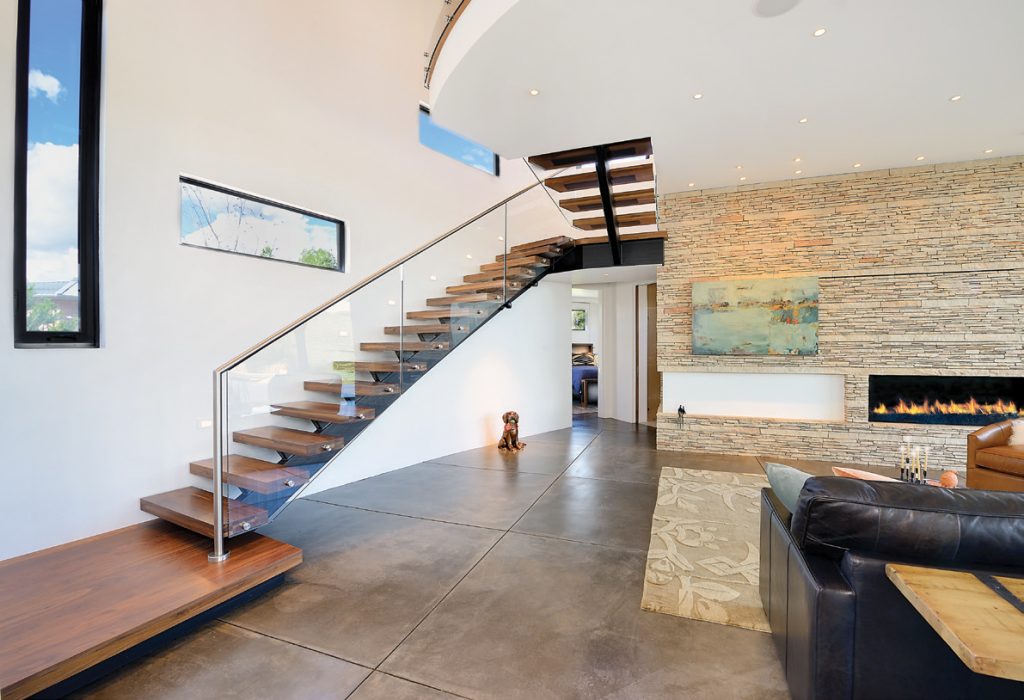 The steel-framed and glass-railed floating stairs have walnut treads, and the wall is hard-troweled plaster.

It’s hard to pin Hoopes down on what it was about Santa Fe that seduced him, but he’s hardly the first creative person to have that experience. He mentions the openness of the people, the climate, the quality of the light, and the city’s dedication to green building. “Most importantly,” he adds, “I learned that there are artisans here who can build whatever you want. On the East Coast, you ordered from catalogs, and you picked one from column A and one from column B. You didn’t have the chance to work with artists and artisans the way you can in Santa Fe. It became an exchange of ideas, rather than an architect putting down on paper what he thought. I enjoyed that conversation a lot,” he says, “and to this day, we bring artisans onto projects early.” 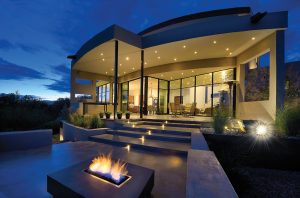 On the southwest side of the Lovato House, the interior living spaces extend to an outdoor entertaining area with a fire pit.

When Hoopes began working in Santa Fe, contemporary architecture was still the exception. By then, the boxy, flat-roofed, early-Pueblo style had evolved into what we think of today as Santa Fe Style — hardly ripe territory for a Modernist. 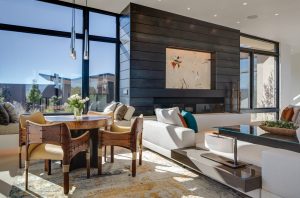 In the living room at Plaza del Centro, a painting lowers to reveal the TV, and the fireplace is made from custom steel.

Hoopes spent a few years working mostly in a transitional aesthetic before he found a steady stream of clients interested in his contemporary work. Still, as modern and innovative as the firm’s projects are, it has become clear that they very much belong where they are. The houses they design blur the line between indoors and out, and reflect the hues and texture of the high desert landscape. 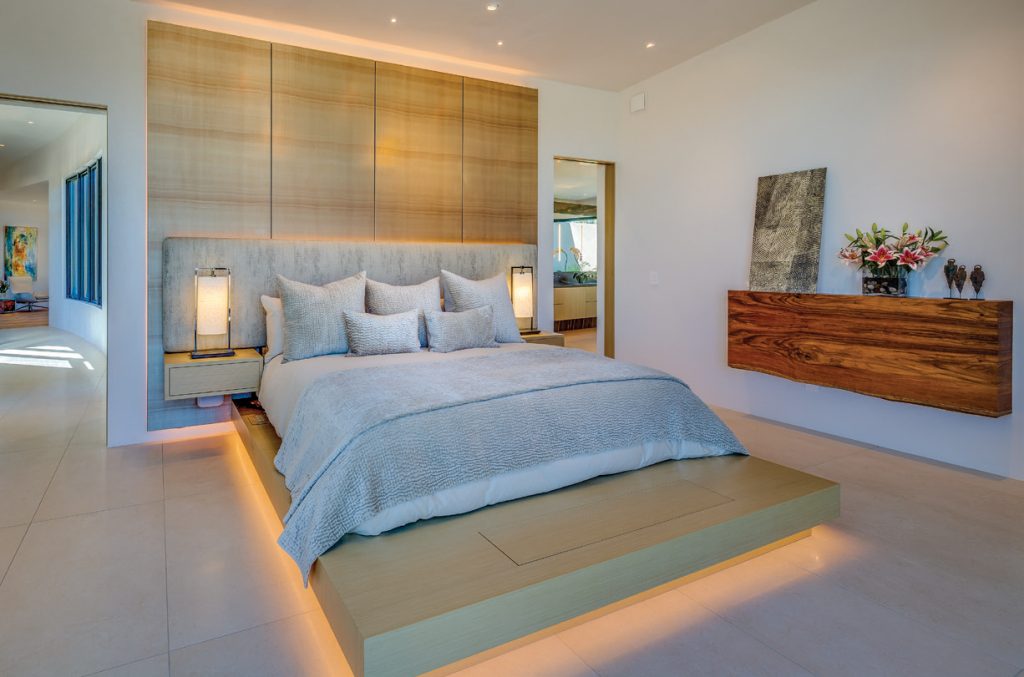 The interior design at the award-winning home is by Paul Rau Interiors. A lighted, floating platform holds the bed, and the TV rises from an inset at its foot. 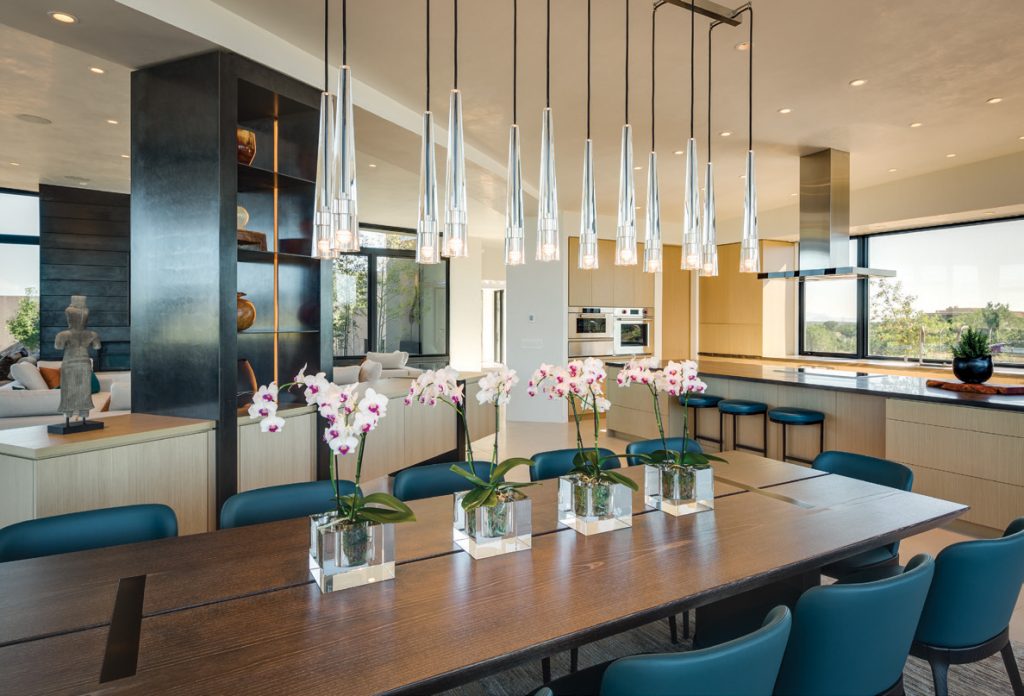 There’s uninterrupted flow from the dining area to the kitchen, while a custom buffet separates the living room. The kitchen cabinets are custom rift white oak with quartz countertops from Brazil. Photos: Robert Reck

“True, traditional Santa Fe architecture was very minimal, it’s not what Santa Fe Style became in the ‘80s,” Hoopes explains. “It was very simple and spare, and I like to think that what we’re doing — even though it’s very contemporary — has that same aesthetic, and what it’s about is how the houses sit in their environment. For the early Santa Fe houses, it was all about protecting them from the winds and the snow and the rains, but for us, it’s about feeling that the house is embraced by the land. Our houses are about light and openness and looking out into the environment, not closing it off.” 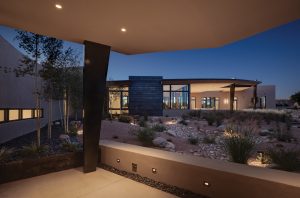 At Plaza del Centro, the landscaping was completed by Serquis + Associates Landscape Architecture to suit the southwestern climate.

Hoopes says none of his recent projects would have been possible without the work of Andrea Caraballo, a project architect and an associate at the firm. Caraballo was born in Miami, Florida, but grew up and was educated in Argentina. She joined Hoopes’ six-person firm in 2017, following nine years of working at Rafael Viñoly Architects in New York City, and she has been responsible for helping to realize the more complicated designs.

One of the first things the firm asks of its clients is to make a portfolio of photographs and experiences that have inspired them. For example, at the award-winning home Plaza del Centro, the clients had an image of a curved hallway in a hotel in Australia in which a staircase descends gently in a series of landings and steps. Hoopes reinterpreted the image into a light-splashed hallway connecting the guest and children’s wing to the main living space. “We try to draw ideas from as much as the client can give us,” he says.

Soaring, gestural roofs at the Villenos House call attention to the surrounding 68,000 acres of Bureau of Land Management wilderness.

“I set the direction of the projects,” he continues, “then work with Andrea to develop the direction it’s going. The team works out the details, and we review it and make sure everything is going to work. It’s a simple process.” 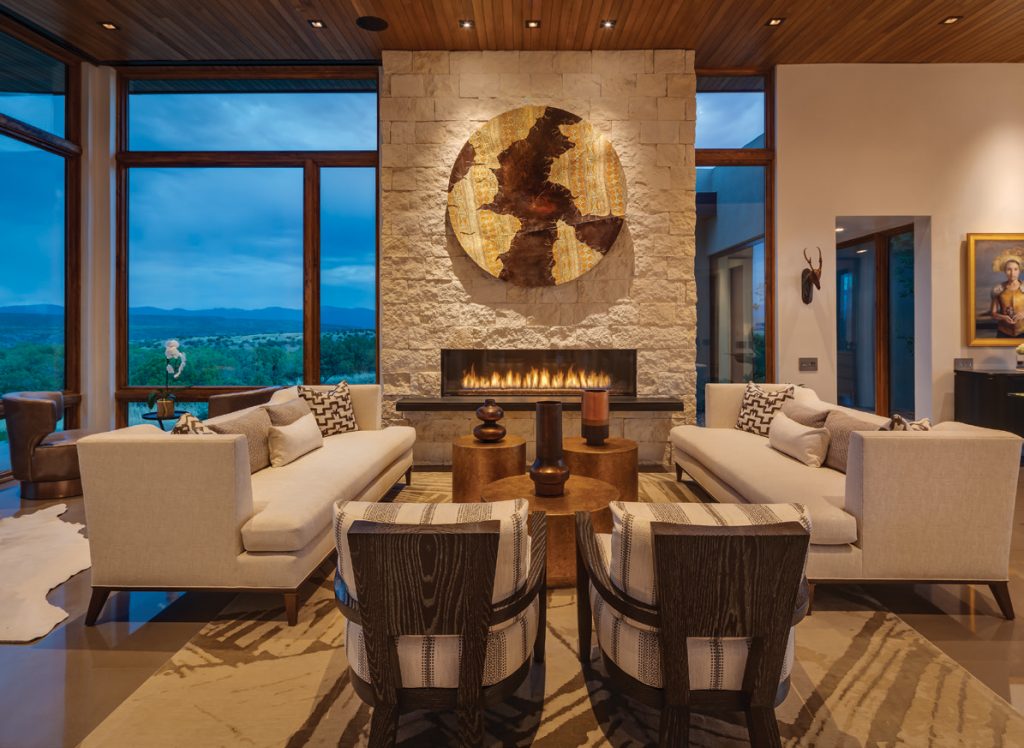 The interiors at Villenos were designed by Chandler Prewitt Design. The fireplace is made of Texas Hill Country limestone, and the doors and windows are by Marvin. The owners are art collectors, and the design accommodates and protects their artwork from the harsh desert sunlight. 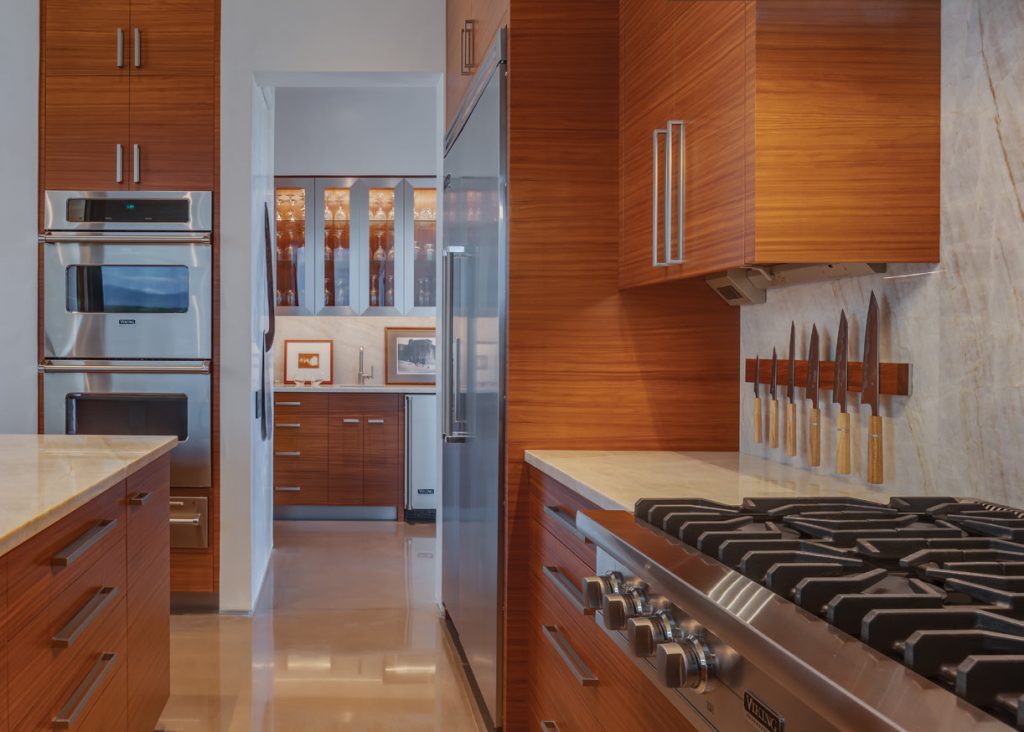 The kitchen at Villenos includes a butler’s pantry. The cabinets are African teak and help to soften the cool geometric lines.

While Hoopes’ career was determined by age 9 when he was entranced by the process of his parents building a new house, Caraballo grew up studying dance and painting. “When I finished school,” she says, “and was wondering what to do, maybe graphic design or something in theater, then I realized that architecture basically includes all of them. My interpretation of architecture is like dancing, a total creative expression. To me, a project is not just a space where people are living; it’s also about movement and light and how the outdoors is coming into the house. I totally believe that when someone grows up in a house with the richness of space, they grow up to be a different person. The appreciation of space is totally different. I believe in organization and proportion, so I work more in complex designs. It’s amazing. It’s fascinating to me. I want to be designing forever.” 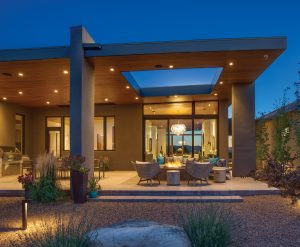 A square opening in the roof over the outdoor entertaining area frames the fire pit below. Hoopes calls his design a reinterpretation of Mid-century Modern.

Hoopes admits computers have made design somewhat easier, especially in that it’s possible to present clients with three-dimensional images while the project is still underway, but he still prefers drawing. “I’m a design-o-saur,” he laughs. “I still like to sketch. These young guys, they’re drawing on computers from the womb. But I think you see things when you draw that you don’t see on a computer. You have what I call the happy accident, where you draw a line, and you see something you hadn’t seen, either a proportion or a flow.” 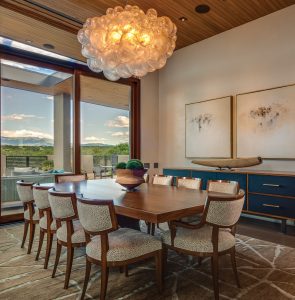 A custom light fixture hangs from an Alaskan yellow cedar ceiling in the dining room of the Villenos House. Photos: Robert Reck

Hoopes is a big believer in organizing a team early on, collaborating with the contractors, landscape designers, and interior designers. However, “We enjoy working out all of the interiors,” he says. “Furniture placement, what kind of furniture, how it’s going to work with the structure of the house, and all of these things we feel are interrelated and not independent of one another. One of the things that happened in the ‘60s and ‘70s, is that architects gave up their position of controlling the interiors. We feel it’s important that we’re involved, so it’s all integrated as one piece.” 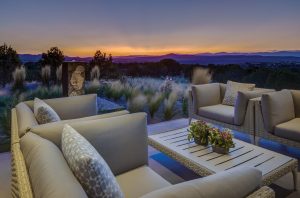 Hoopes has built houses from Maui to Sicily for repeat clients. For one couple, he’s built five homes; for another, four. He becomes part of the family, and that’s just how he wants it. For a couple who divorced after he’d designed their residence, he designed their new houses, creating a separate vision for each that differs from their former lives. 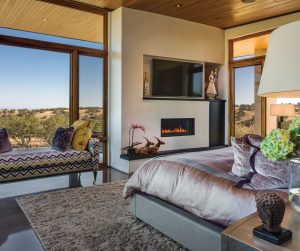 The walls in the primary bedroom feature a sleek palette of hard-troweled plaster to contrast with the polished concrete floor. Photos: Robert Reck

As to the firm’s future, Hoopes takes on a ruminative tone. “I’m fortunate to have people like Andrea coming up in the firm who’ll take on more responsibility as time goes on,” he says. “I will, at some point, want to spend more time on other things I have planned, like books about architecture, not instructional books, but books about ideas. Hopefully, I’ll still be around for a while to create the direction the firm is going and the concepts for different projects, but more and more it will be people like Andrea who will carry those ideas forward. I feel like we’ve got terrific people working with us, so I’m very hopeful the firm will continue.”