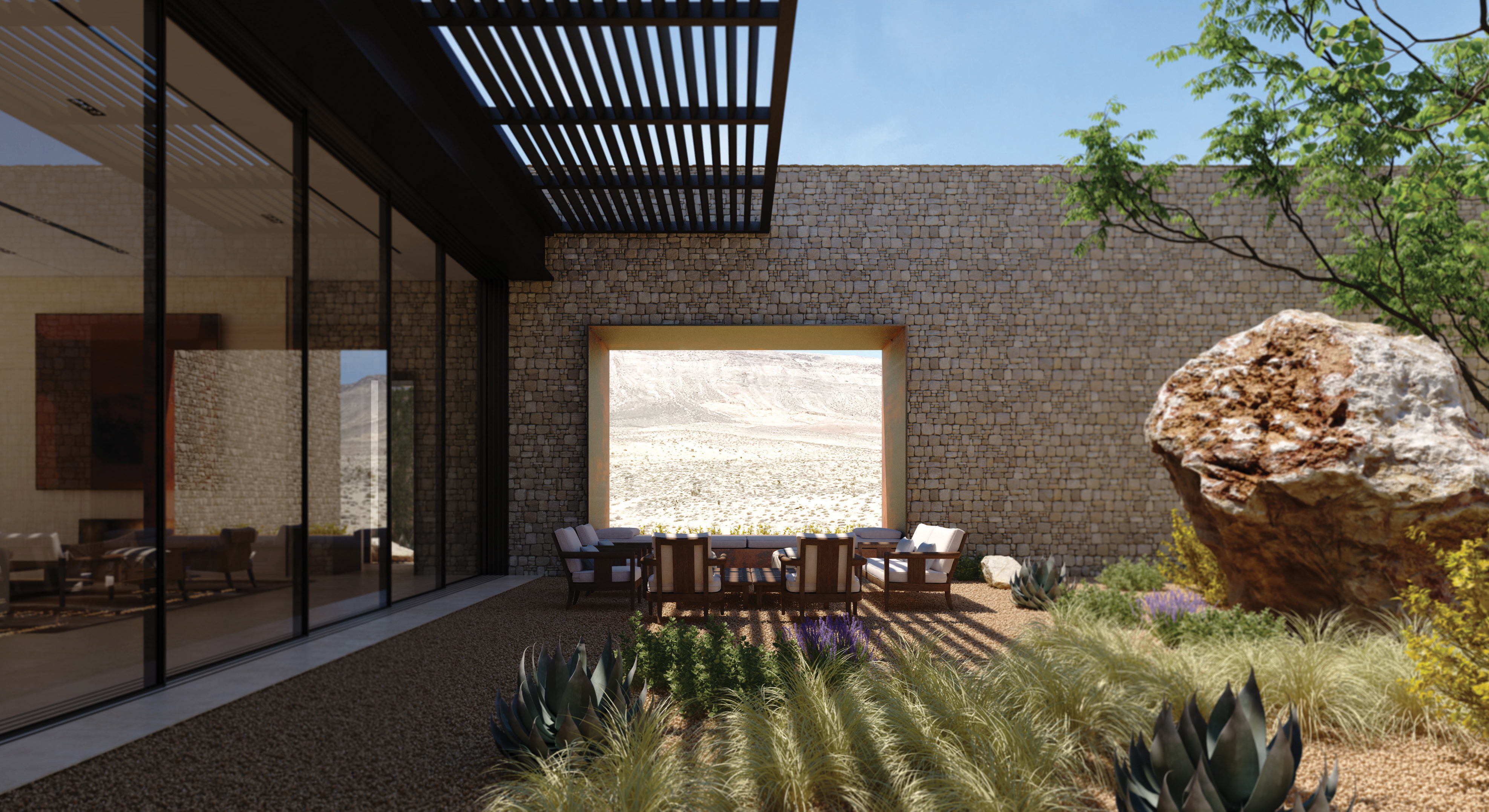 A courtyard at Fort 137 provides respite from the heat. The outdoor furniture is from Restoration Hardware.

Often in a beautifully designed hotel, we find ourselves gazing around and wishing we could replicate the experience at home. It’s rare to find an AIA award-winning architect who marries residential design with interior design, but at Daniel Joseph Chenin, Ltd. the team has experience creating interiors for high-end hotels, such as the Four Seasons, Mandarin Oriental, and Auberge Resorts, as well as bespoke residential projects. 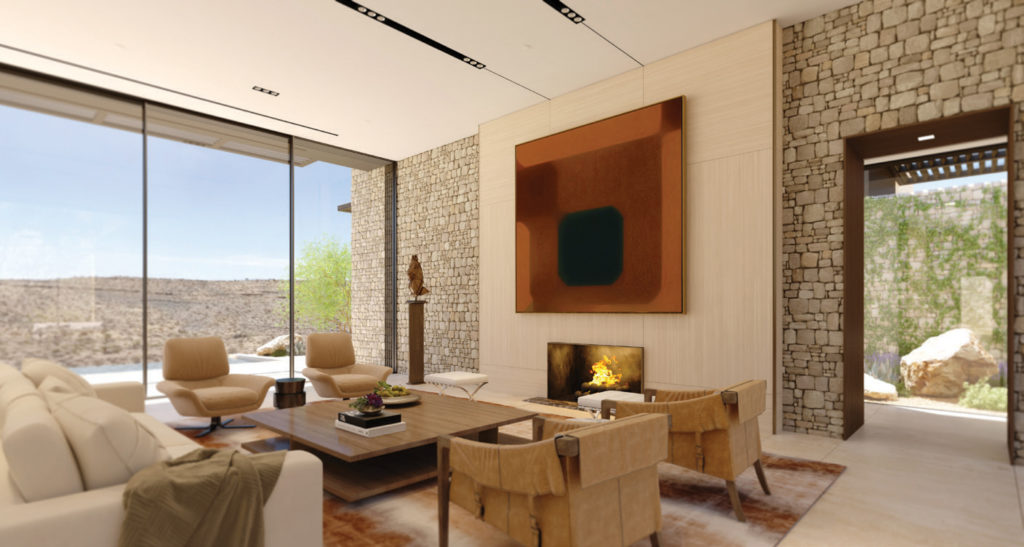 The clients requested a living room with glass walls on either side that open to the views. The artwork was selected by architect Daniel Chenin, and the trimless lighting is by Delta.

Daniel Chenin was born, raised, and educated in Las Vegas, Nevada, where he continues to practice. He figures he got his start the same way as most contemporary architects: building things with Legos. During a first- or second-grade art class, several kids who’d looked at his drawings told him he’d make a great architect. So Chenin signed up for architecture classes in high school and interned over the summers, then interned again during architecture studies at the University of Nevada, Las Vegas (UNLV). In a moment of serendipity only matched by elementary school kids steering him toward architecture, a college friend showed his portfolio to an interior design professor who then invited Chenin to his class to present on creating a good design portfolio. “One thing led to another,” Chenin says, “and the next thing you knew, I left my architecture internship to jump into interior design.” 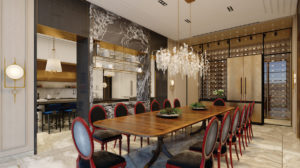 The kitchen offers a less formal seating area with a picture window that looks into the adjacent dining room. The large range oven is from Blue Star, the light fixtures are by J. Randall Powers, and the bar stools are by Powell & Bonnell.

After receiving his master’s in architecture from UNLV, he became a senior designer at the architectural firm Tate Snyder Kimsey, but soon found his way to TAL Studio, renowned for its hospitality interiors. He served as director of the company before leaving to form his firm in 2014. “The level of thought and ideas working at that level was different from anything I’d experienced before,” Chenin says of his time at TAL Studio. “It helped me understand that spaces, as beautiful as they are from an architectural standpoint, must also function from an interior standpoint. A house is mostly occupied from the inside, not from the outside, flying around like a bird looking at this cool form or shape.” 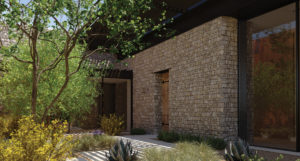 Most of the exterior walls are composed of rock sourced from the site. The door, made from 19th-century Spanish wood, is accented with custom ironwork. Photos courtesy of Daniel Joseph Chenin, Ltd.

The firm remains small, with a team of six (not counting the office dog). Many of their commissions are contracted at full service; clients are charged a fixed fee that includes both architectural and interior design, as well as hiring and overseeing all the contractors — a tremendous degree of detail, which ends with finished spaces that clients can move right into. Most architects design beautiful houses and take on some of the finishes, but few go beyond built-ins to tackle interior design.

“It’s a lot of work,” Chenin admits. “You’re thinking about spaces and designing millwork for every room, picking the finishes, the fabrics, going through that whole range of things.”

Up to now, projects have been Las Vegas-centered, but they plan on expanding to other states. “At its core,” Chenin says, “our philosophy is that we don’t subscribe to a particular style. We subscribe to good architecture and interior design that enhances someone’s life and promotes a more luxurious lifestyle. The style may change, but the level of detail and rigor that we provide remains the same.”

The kitchen offers a less formal seating area with a picture window that looks into the adjacent dining room. The large range oven is from Blue Star, the light fixtures are by J. Randall Powers, and the bar stools are by Powell & Bonnell.

Clients are generally attracted through word of mouth. “One of the things we’re really proud of,” Chenin says, “is that clients come to us and say, ‘We don’t see X on your website, but can you do it?’ What’s on the website is what we’ve been asked to do, but we don’t want to repeat ourselves. We want someone to see the attention to detail and the thoughtfulness and decide to hire us for a project that hasn’t been imagined yet.” 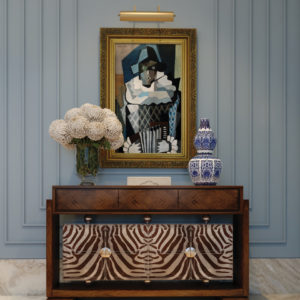 At Palladio, each room was designed to feature artwork. The console is Virgi by Smania with custom drawers in faux zebra added by Chenin.

One signature that won’t change is the prominence of art. Chenin inherited a love of art from his grandmother, herself an artist, and whether he’s accommodating an existing collection or coming up with one-of-a-kind pieces from galleries to First Dibs to flea markets, the houses feature stop-in-your-tracks artworks that define their spaces.

To date, the structures — all of which are second or third residences — have been modern in design, but pay homage to the past, drawing ideas from the forts of the Old West to Mid-century Modern layouts to Palladian estates.

The owners of Fort 137, a home set on a hill that abuts the edge of untouched Bureau of Land Management property outside of Las Vegas, wanted views of the Red Rock Canyon Conservation Area as well as an environmentally-friendly house that used locally-sourced materials. They produced a photograph of a white, box-like house they’d seen in their travels, but couldn’t exactly articulate what it was they liked about it. Chenin and the team extrapolated on the double glass-walled living room, creating an equally open but different space, with one glass wall looking out over the infinity pool and the other over the desert courtyard. The site didn’t lend itself to the canyon view the clients had envisioned, so Chenin designed a rotunda they could climb to enjoy the views from a 23-foot-high deck with a fire pit and built-in seating, all against a soothing background of water splashing in a fountain. The courtyard setting and the rotunda, standing in for an observation tower, refer to Nevada’s old forts. 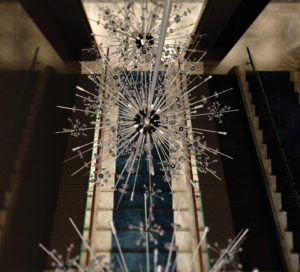 The chandelier above the staircase is the Metropolitan Auditorium by Lobmeyr. Photos courtesy of Daniel Joseph Chenin, Ltd.

“When we were awarded the job,” Chenin says, “we went out to the site at different times of the day and walked around. We think about solar orientation, wind patterns, the topography of the site. It’s extremely hot here. And the Western sun is very difficult to deal with, especially later in the day, so the orientation of the building forms and windows depends on how the sun enters the space in the summer and winter, and how operable windows can open up to have fresh air exchange and to create high and low pressure to draw the air through.” 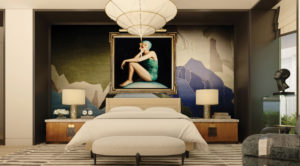 The master bedroom in TNT, a home in Malibu, California, features a painting by Elise Remender, a custom area rug by Stark, and a silk light fixture by Fortuny. The wall covering is Rockface by Fromental.

Another project, dubbed TNT, hues more toward a Mid-century Modern theme. The clients, whose main house is in Malibu, California, were accustomed to opening windows to ocean air and being surrounded by gardens. To accommodate that indoor-outdoor lifestyle in the harsh, arid climate of Las Vegas, Chenin created pocket gardens off of all the bedrooms, along with protective roof overhangs that resemble white fins. The house is part of a hillside community with views over Las Vegas that are some of the most striking available.

A project titled Palladio is, at the clients’ request, a 16,500-square-foot, H-shaped contemporary house referring to the eponymous 15th-century architect’s villas. Each section of the H serves a distinct function (living, dining, sleeping), and they’re connected by two hallways that serve as art galleries. In this case, the clients have an extensive collection of Hudson River School paintings. 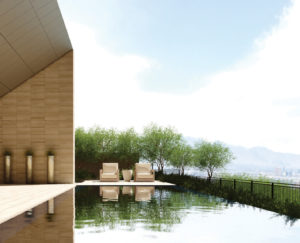 The dark pool was custom designed by Pebble Tec to reflect the sky and desert views. The outdoor furniture is by Restoration Hardware. Photo courtesy of Daniel Joseph Chenin, Ltd.

The clients interviewed five architects, and their statement to Chenin was, “All great paintings must have a frame, which becomes a window into the subject matter.” They also wanted a hotel-like space that would be at once eclectic and contemporary but wouldn’t date itself. Chenin took their statement about the frames as a metaphor, while thinking about the site and how the spaces needed to function. Each of the rooms is entered through a framed portal. 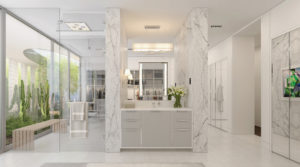 In this master bathroom, the custom vanity is lined in chrome and white marble with a floating medicine cabinet designed by Chenin. The pendant light is Brindille by Hubbardton Forge. Photos courtesy of Daniel Joseph Chenin, Ltd.

“Our clients gave us direction — we had 20 pages of preferences — then they turned us loose and let us go behind the curtain to cook up something to unveil to them, and it was a hit. We took their direction and moved beyond where they ever thought it could go.”