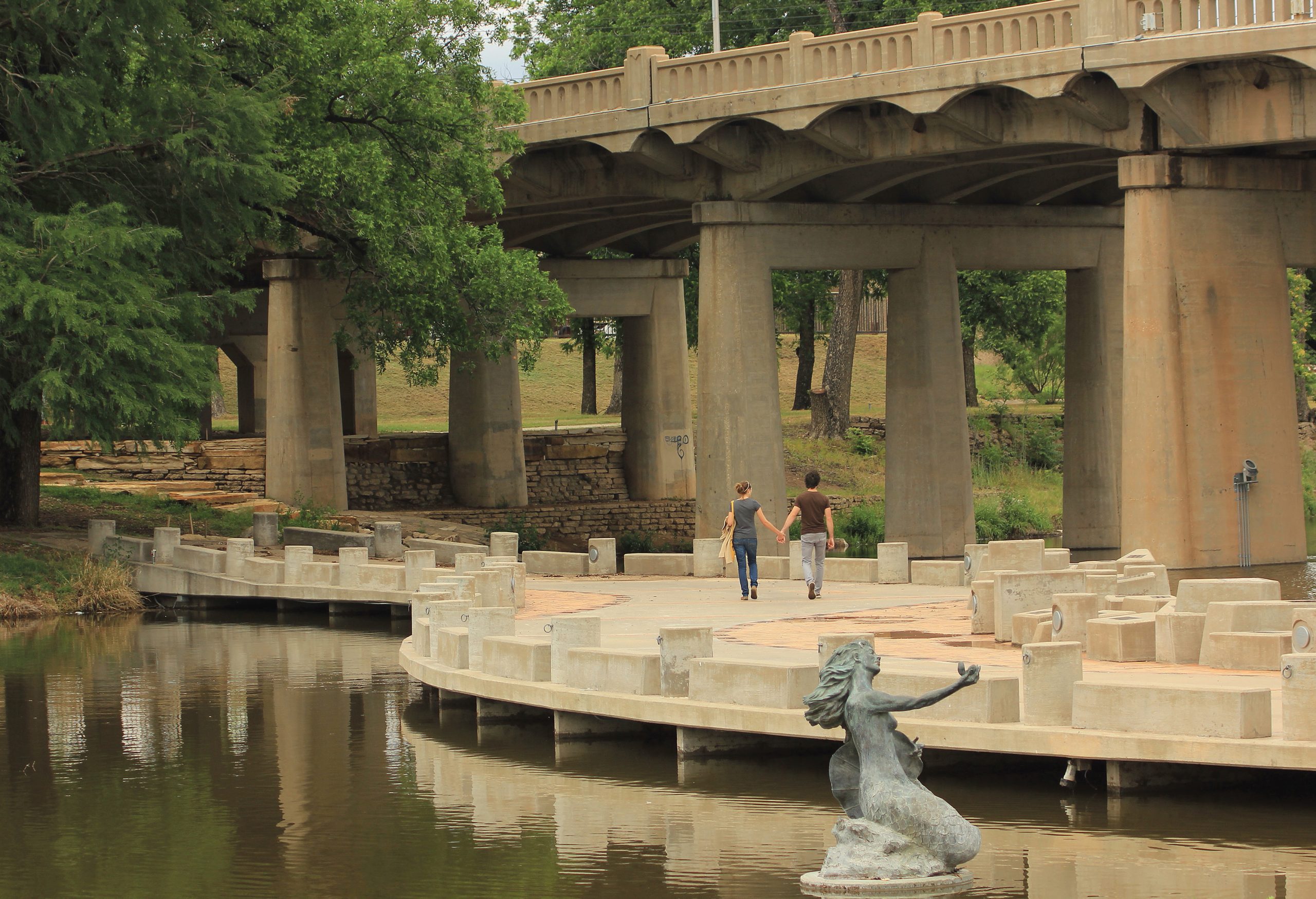 When architect Oscar Ruffini stepped out of a stagecoach in the tiny West Texas town of San Angelo, he was very sick. His last hope of getting well in 1884 was the hot, dry air of this rowdy frontier town beside Fort Concho. It worked — he lived to be 98 years old and created a legacy of buildings that still stand today.

Ruffini was quite a character. He always wore a black suit, black tie, and black hat. He ate the same meals every day at the same time and in the same place. For breakfast, it was bacon and eggs at the City Café, and every afternoon, he ate a scoop of vanilla ice cream with a cherry on top at the Concho Drug Store. He designed approximately 40 buildings, including most of the churches in downtown San Angelo, and he helped found the Texas State Architecture Association of Architects in 1886, the precursor for the Texas Society of Architects. 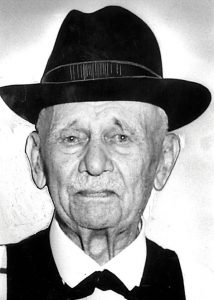 In 2019, one of Ruffini’s designs was rebuilt using drawings he made more than 100 years ago. The new Ruffini Chapel in the Old Town Historic District looks just like the First Presbyterian Chapel that the architect designed in 1886.

Fort Concho has been restored to what it was when Ruffini stepped onto its dusty Main Street. At this National Historic Landmark, you can see where soldiers got “three hots and a cot,” and were paid $13 a month. Some were African American Buffalo Soldiers who arrived when the Civil War ended. The fort is home to the Douglas McChristian Collection of frontier soldiers’ accoutrements. History comes to life when volunteers blow bugles, fire cannons, and re-create life at the fort. It also hosts the American Plains Artists Juried Exhibit & Sale, which historically takes place June through August. 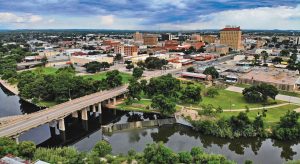 The Concho River runs through the heart of downtown. The river drew the bison, Native American tribes, soldiers of Fort Concho, and pioneers who settled this West Texas town. Photo: Tim Vasquez

In addition to these architectural gems, San Angelo is notable for its recently earned titles: The No. 1 True Western Town for 2020 by True West Magazine and certifications as both a Music Friendly and Film Friendly community by the state’s Governer’s office.

Four contemporary buildings would certainly catch Ruffini’s attention if he visited today. The San Angelo Museum of Fine Arts is an award-winning 1999 design by Malcom Holzman of Hardy Holzman Pfeiffer Associates of New York City. Built from massive native limestone blocks with a vaulted copper roof and Texas mesquite hardwood floors, the innovative design sits on the banks of the Concho River and overlooks downtown. The museum is the home of the National Ceramics Competition, EnPleinAirTEXAS (see page 145), and a large-scale juried collection of outdoor sculptures. Contemporary American ceramics and Spanish Colonial and Mexican religious art complement a variety of changing exhibits from many cultures and periods. 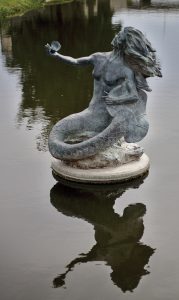 A sculpture of a mermaid offering a pearl in the Concho River was designed by Jayne Charless Beck and was cast in bronze by Garland Weeks in 1994. Photo: John J. Osterhout

The San Angelo Visitor Center, designed by Craig Kinney Architects, features a base of 250 tons of roughback quarried limestone, exterior walls of more than 300 tons of specially blended sandstone, and mesquite wood floors. 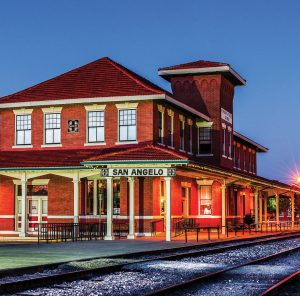 Ruffini wasn’t the only architect of note in the region though. San Angelo’s renovated City Hall and Murphey Performance Hall started as a 1929 gem of Art Deco architecture designed by Gustavus Trost of El Paso. The Regional/Urban Design Assistance Team, a program from the American Institute of Architects’ Center for Communities by Design that completes citizen-led improvement projects, helped the city planners create a dynamic plan to unite the two sides of the Concho River and bring downtown and the Cultural District together.

Celebration Bridge was created to literally bridge the gap. And today, the accompanying River Walk is one of five Great Public Spaces, a designation by the American Planning Association. Walkers and joggers can travel along 4 miles of well-lit trails on the riverbanks, and kayakers can paddle right through town. There are 20 bridges crossing the branches of the Concho along with murals, mosaics, art lighting, and sculptures.

Downtown San Angelo has a rich array of shops, bars, and restaurants; some renovated from Ruffini’s original buildings. Miss Hattie’s Restaurant & Cathouse Lounge was designed by Ruffini during the 1880s economic boom and was one of the first permanent structures in San Angelo, or try Angry Cactus, an upscale bar and grill. In his later years, Ruffini was a bit quirky. Hopefully he would approve of the bright turquoise doors on his first stone building, now J.Wilde’s & Friends, a clothing store that is offers a mix of Western heritage with an eclectic twist. 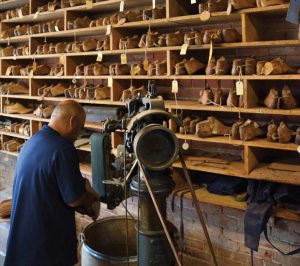 : M.L. Leddy’s has been in San Angelo for more than 100 years. The boots are made using a foot-shaped mold called a “last” to ensure that the finished product fits just right. Photo: Bruce R. Partain

Other shopping opportunities include Eggemeyer’s General Store, which unites three renovated historic storefronts filled with unique items. At Legend Jewelers you’ll find the treasure of San Angelo: rare colorful pearls from Concho River mussels. Cactus Book Shop has one of the best selections of Texas and Southwest literature in the state. You might want to put your feet in the hands of the expert bootmakers at M.L. Leddy’s, which has been there for more than 100 years. Just ask, and you’ll get to watch the bootmakers at work.

The ornate Cactus Hotel, created by Conrad Hilton in the 1920s, is now a meeting and events venue. And nearby Heritage Park, completed in 2020, sprang from the original R/UDAT study. 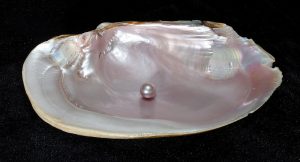 The rare Concho pearl in a mussel shell can be seen at Legends Jewelry in downtown San Angelo. The colorful pearls are known as “Tesoro de San Angelo.” Photo: John. J. Osterhout

The murals of Paintbrush Alley pay homage to the movie “Giant,” which starred Elizabeth Taylor, Rock Hudson, and James Dean, and was filmed in Marfa, Texas. The new Pop Art Museum is an open-air and open-mind bright spot in a former downtown bowling alley.

Throughout downtown, there are historical murals and most of the 101 sheep sculptures were painted by local artists. Galleries on the ends of the arts spectrum include Raw 1899 and Ruiz Studio and Gallery. The International Waterlily Collection fills seven large ponds in a sunken garden near the Concho River. It holds just a fraction of what is called the premier collection of water lilies in existence. 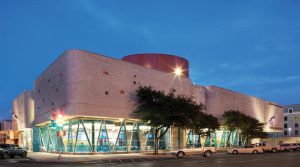 The Stephens Central Library is the largest in Tom Green County. Designed with Art Deco windows, by Malcolm Holzman, it resembles a ship. Photo courtesy of the Tom Green County Library

At The Chicken Farm Art Center, local artists scratch out creations in their studios that are housed in old farm buildings. The Silo House is a gourmet restaurant hidden away on the grounds. 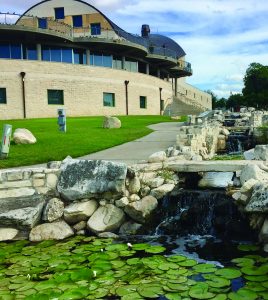 Off the Beaten Path

Near Paint Rock, a community of around 300 that serves as the Concho County seat, you will find one of Texas’ major pictograph sites. Arrange a private tour to see an estimated 1,500 Native American drawings on a 70-foot-tall limestone cliff, some more than 1,000 years old. At the only other blinking-light intersection in town, you can’t miss the Concho County Courthouse, which was built in 1886 by, you guessed it, Oscar Ruffini. Or take in local craftsmanship: visit a working blacksmith shop at 3 Nail Ironware, and Texas Handwoven Creations processes alpaca, llama, and buffalo fiber that’s woven on site.

The early lure of the village of Christoval, on the trail between two forts, was its location on the South Concho River. It was one of the original art colonies in Texas, and from 1921 to 1928, the Texas Artists Camp became one of the leading institutions of its kind in the Southwest. Christoval Vineyards & Winery has a tasting room for their award-winning wines and a chapel for special events. 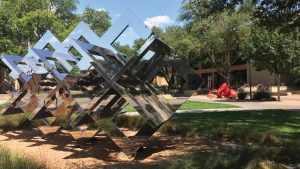 Cube-i by Owen Morrel is located on the Angelo State University campus. In the background, the undulating red ribbon is Kinesis by Joaquin Gasgonia Palencia. Photo: Barbara Rallo

The Hummer House is the summer home to Texas’ largest concentration of breeding black-chinned hummingbirds. Watch from the air-conditioned observation room as they fight over sugar water. You can even stay in a cottage on
the grounds. 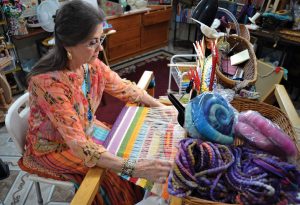 The Hermits of the Most Blessed Virgin Mary of Mount Carmel are a community of men called to a life of silence, solitude, prayer, and penance in Christoval. Visitors are welcome to Sunday mass and to the monks’ online store for fresh-baked bread, chocolates, and jellies.

When it’s time to slow down, grab an ice cream sundae from The Latest Scoop in downtown San Angelo, and take a “Ruffini ramble” down to the Concho River. Listen to stories of the authentic Old West in the slowly flowing water, and you’ll understand the independent and creative spirit of the community today. 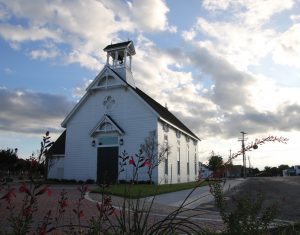 One of Oscar Ruffini’s oldest designs was rebuilt using blueprints he created over 100 years ago for the First Presbyterian Church. The new Ruffini Chapel was built in San Angelo’s Old Town Historic District and looks just like the chapel he designed in 1886. Photo: Susan Brooks

OFF THE BEATEN PATH