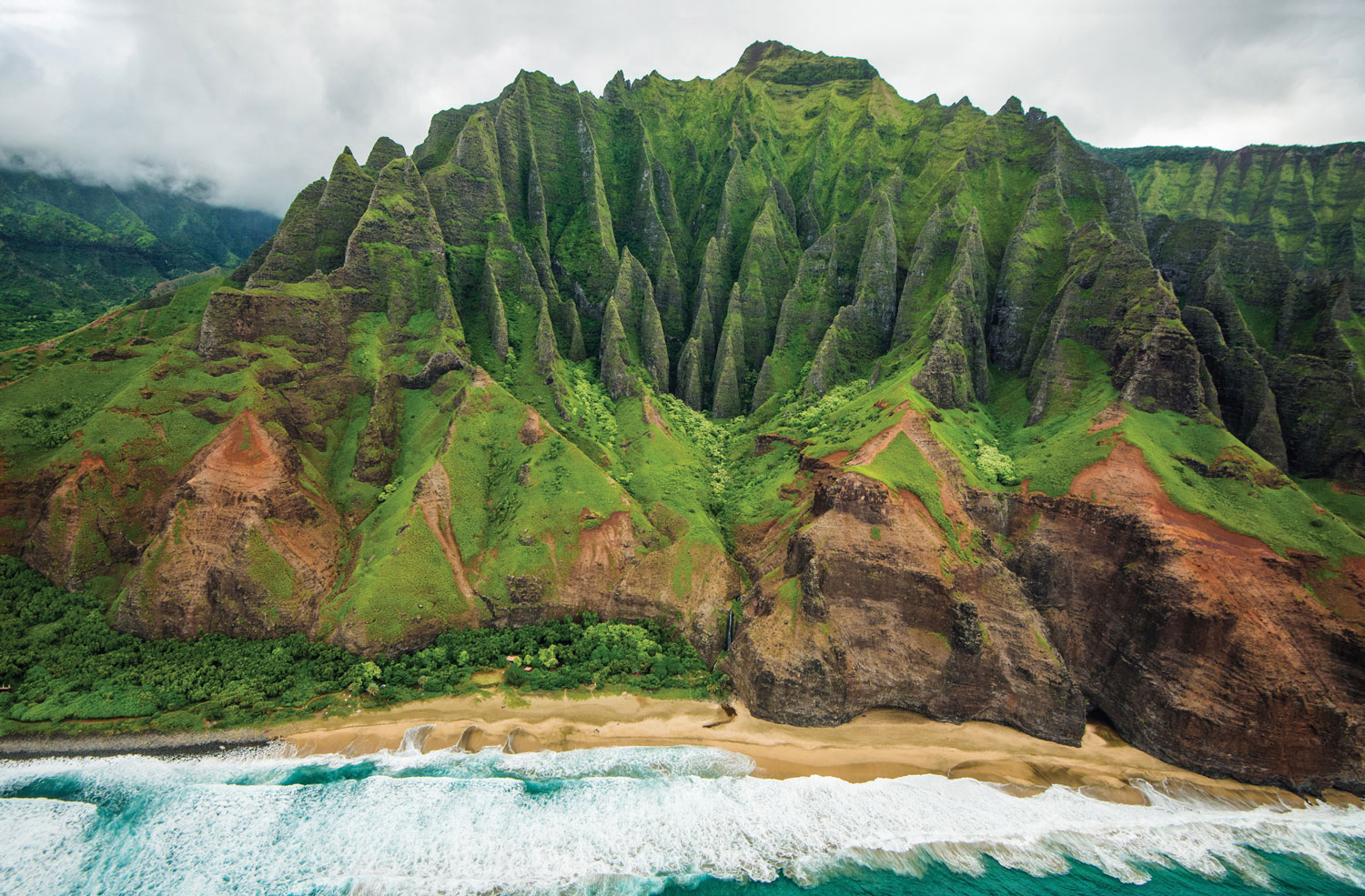 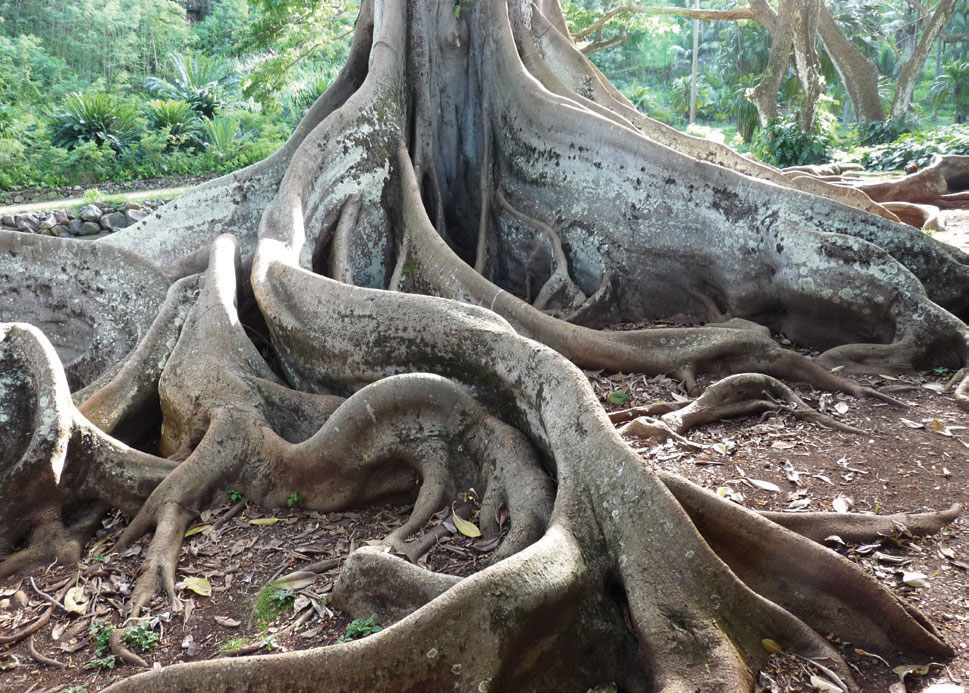 A little more than 25 years ago, actress Ariana Richards screamed and trembled her way into our hearts in the movie “Jurassic Park,” filmed in Kaua`i. The blonde 12-year-old stole scene after scene as she hurdled over giant tree roots in Allerton Garden and gawked in wonderment at the turquoise Na Pali Coast. “Being immersed in the island’s ocean and observing the beaches in the changing light gave me a great love for painting seascapes, which I’ve been doing ever since,” says Richards, now an artist in Oregon. 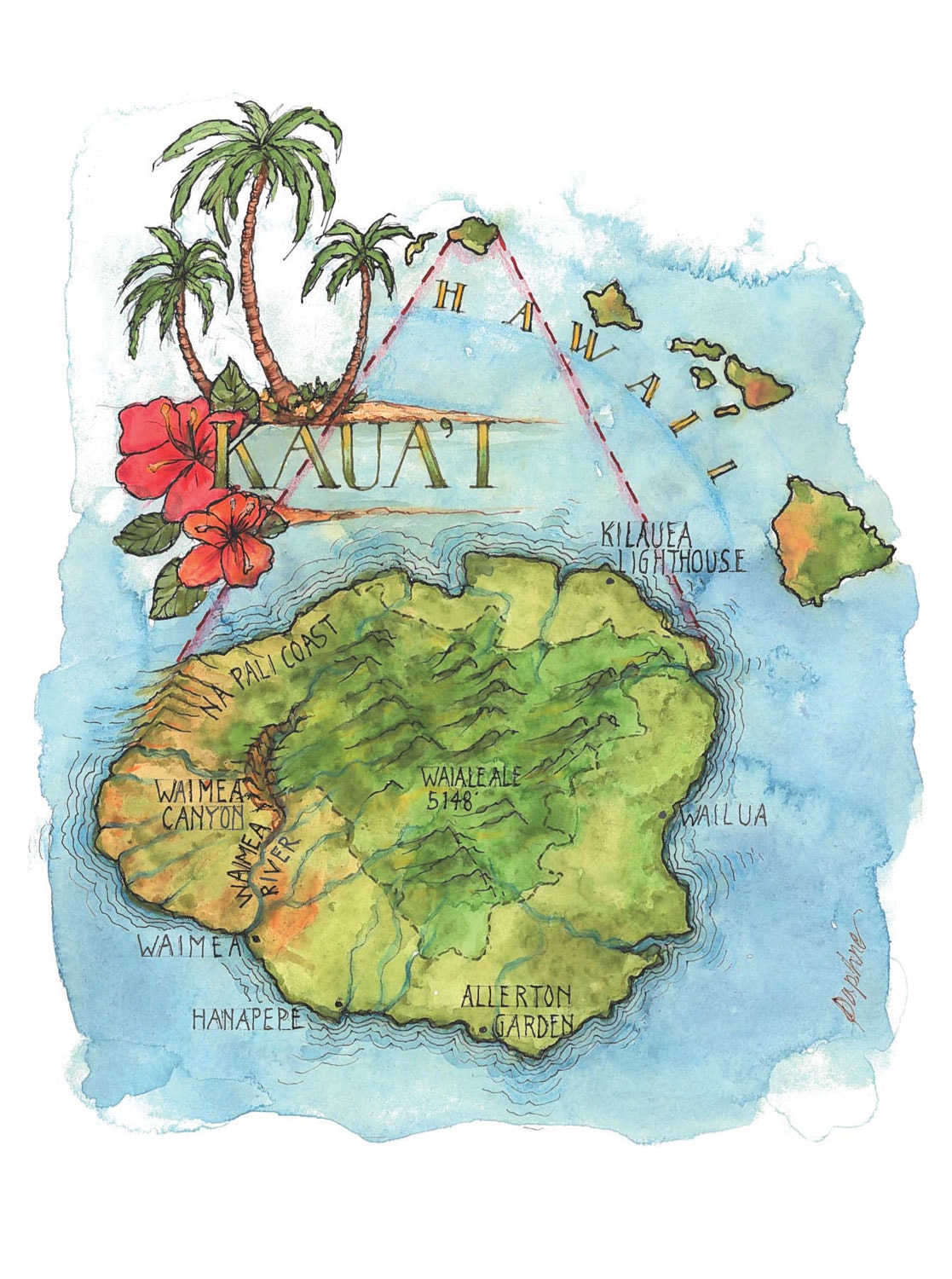 Richards is not the only one captivated by Kaua`i’s scenic wonders. Each year, nearly 1 million tourists descend on “the Garden Island,” which is geologically the oldest of the Hawaiian islands and the fourth largest at 554 square miles. As visitors rediscover “Jurassic Park” film sites (due to heavy promotion), they are also immersed in nature. And spa resorts, shopping havens, and gallery gems are easy to find throughout the laid-back towns.

Compared to the hustle and bustle of O`ahu, Kaua`i instantly disarms visitors with vistas of aquamarine ocean and tropical foliage in intense green hues. There are no big cities, but blink-of-an-eye towns with magical names such as Hanapepe and Hanalei. There’s even an official county code which states that no new buildings can be erected higher than the tallest coconut palm. Instead of skyscrapers, lush mountains and wandering chickens earmark the landscape. 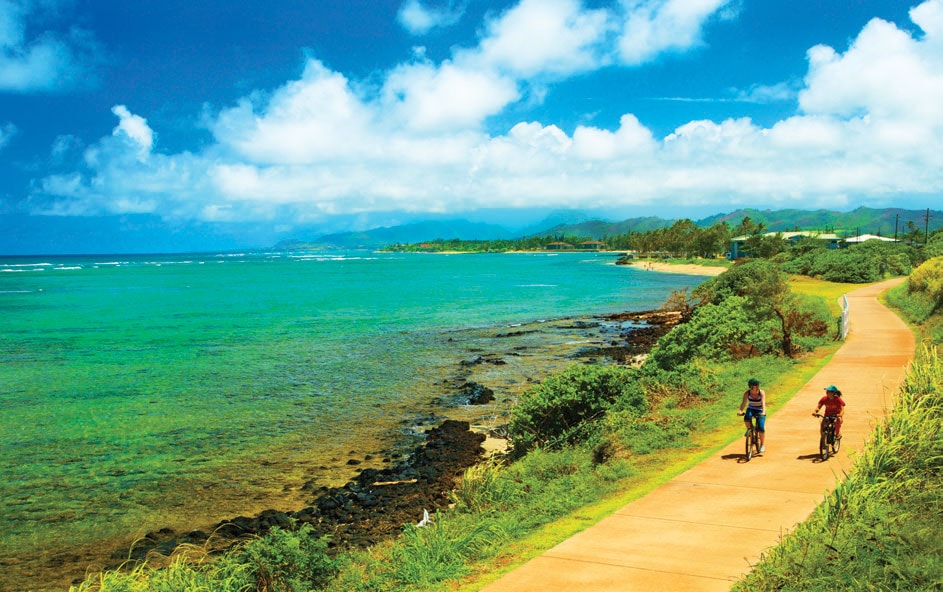 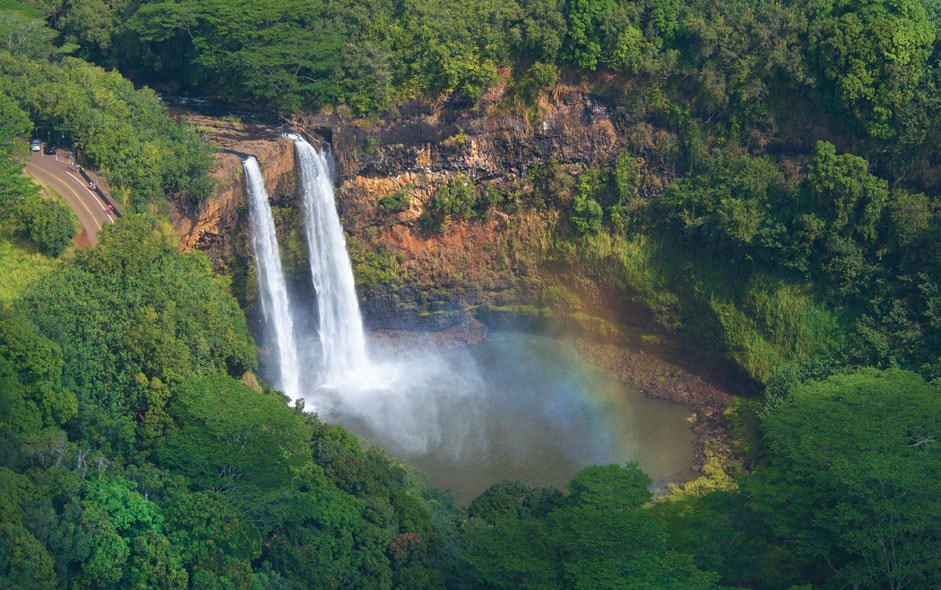 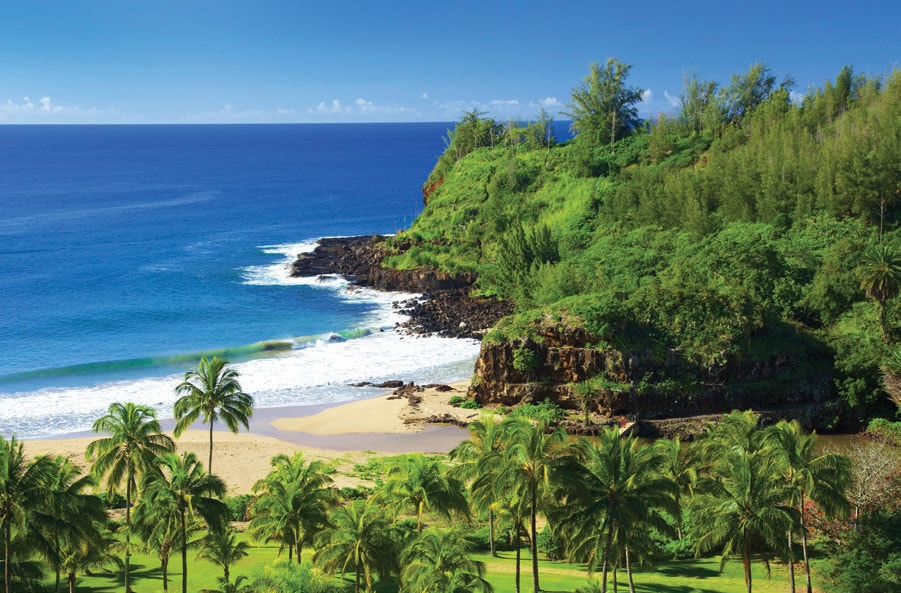 Meanwhile, locals are feeling the pinch of higher real estate costs to the point where Kaua`i is now considered a billionaire’s playground. Several years ago, Facebook founder Mark Zuckerberg purchased some 700 acres for more than $110 million to build a home and compound. Increased traffic and a high cost of living is the price of paradise, but folks like Sue Kanoho, executive director of the Kaua`i Visitors Bureau, are here to stay. The former animal trainer and Hollywood stunt woman came to Kaua`i to visit her parents, and then married a local boy. “I fell in love with the beauty of the island, but it was the people of Kaua`i that made me want to stay, and that was 31 years ago,” she says. “We are a small island with big hearts.”

Kayakers can rent or book a tour plying the Wailua River. Courtesy of Kauai Visitors Bureau Photographed by Kicka Witte 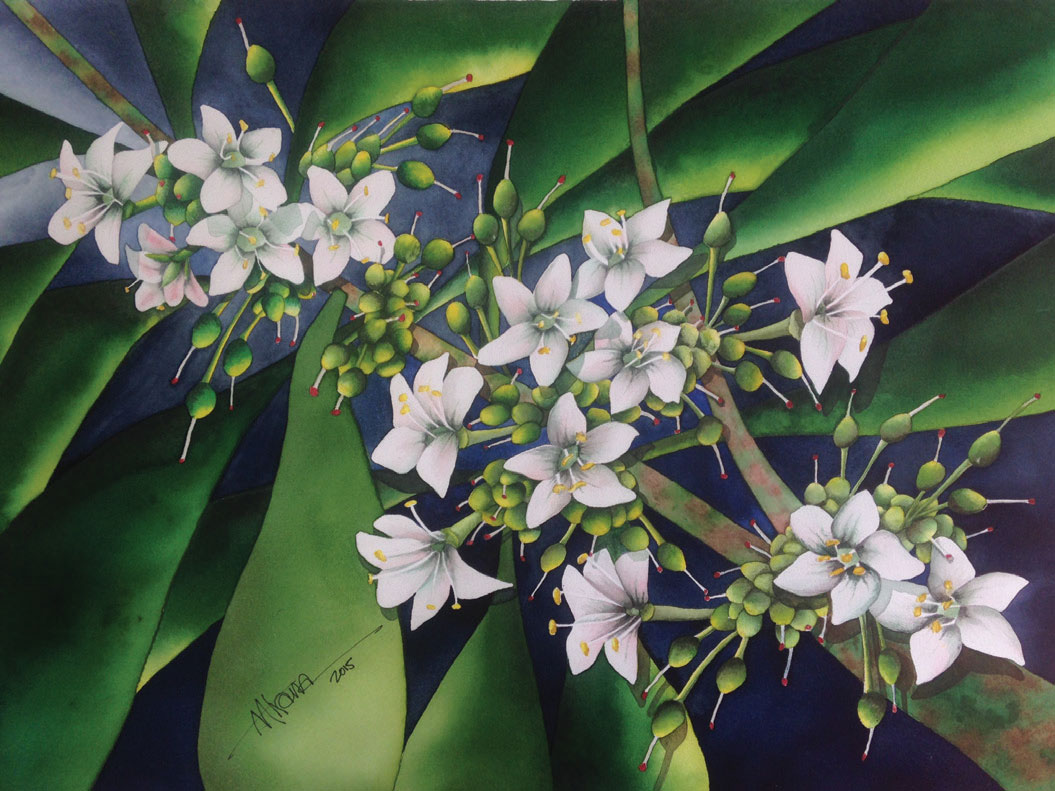 Depicted by artist Alan Akana, the naio flower is native to Hawaii and the Cook Islands. Courtesy of Alan Akana Gallery

For a bird’s eye perspective of this big-hearted island, try a helicopter flight. Island Helicopters is the only operator permitted to touch down by the 400-foot Manawaiopuna Falls, shown in the opening scene of Steven Spielberg’s 1993 blockbuster. “I saw the island in a different way from the last time I was there,” says visitor Dinora Bradley of San Jose, California. “What made me appreciate Kaua`i was this helicopter ride. We had a pilot who described the places with so much love that it was contagious.”

On the ground level, get a dose of sugarcane history on the island’s only inner tube excursion from Kaua`i Backcountry Adventures. Guests float lazily down a private irrigation channel and through pitch black caves during an hour-long excursion. The calorie burn on this trip? Zero. Bragging rights? Infinite. No experience is needed, but participants should feel comfortable in narrow, dark spaces. Guides are funny and informative as they share stories of Kaua`i’s sugarcane history when laborers from the Philippines, Japan, China, and other Asian countries came to work on plantations. 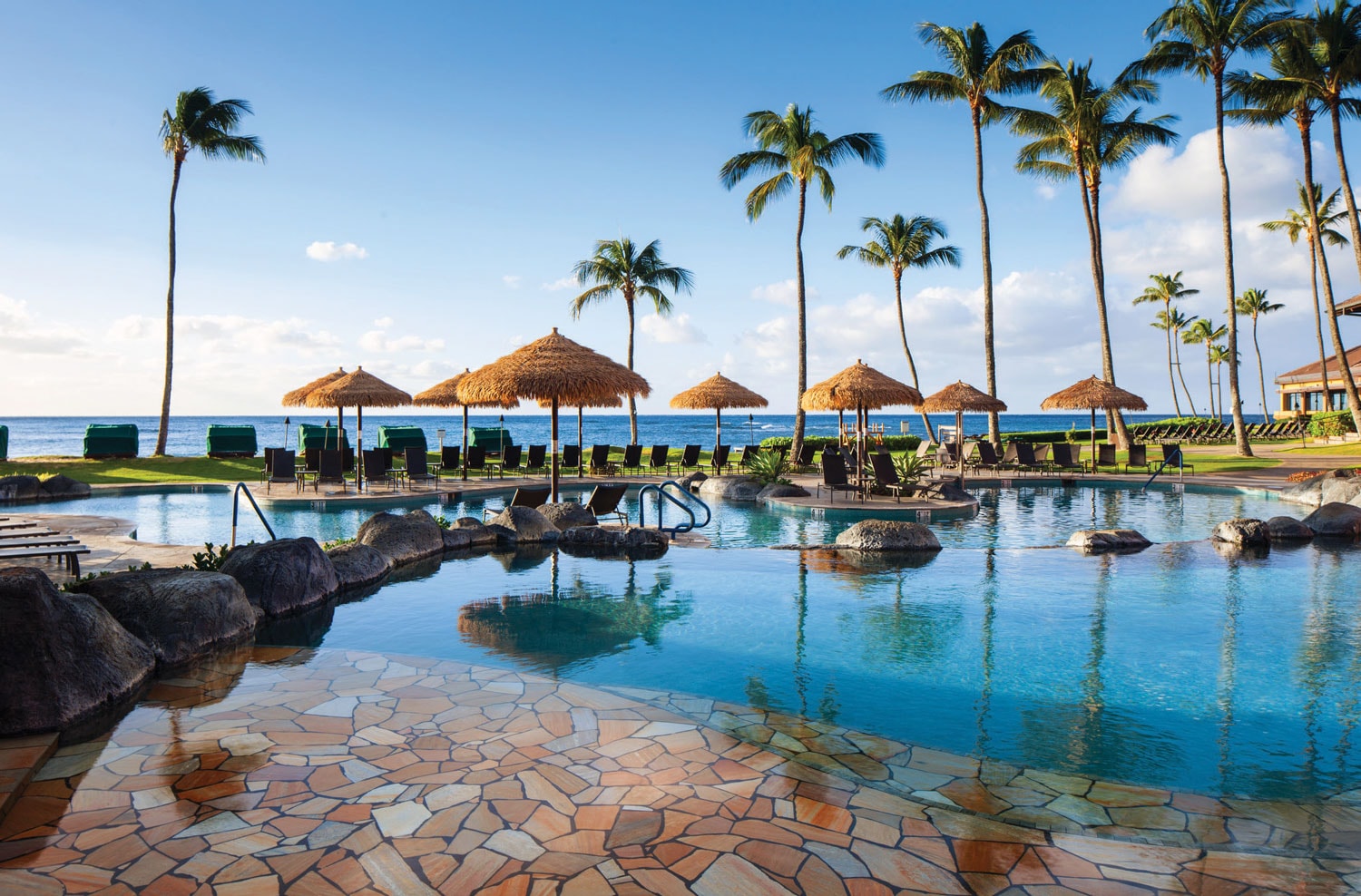 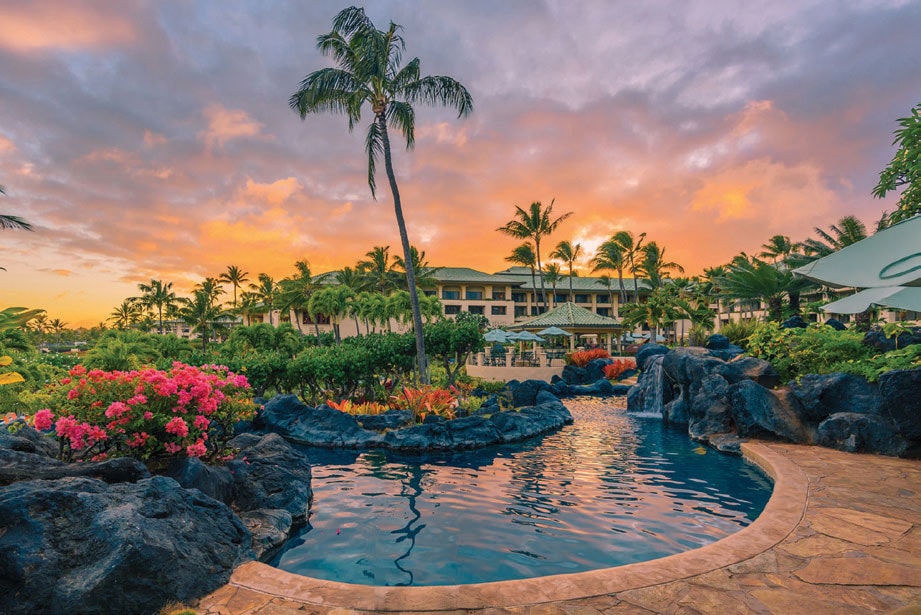 Meanwhile, spa mavens find their happy place at the Grand Hyatt Kaua`i’s Anara Spa where they can treat themselves to a lilikoi body scrub or lomi-lomi facial with papaya and hibiscus exfoliants. For full pamper power, stay the entire day treading in the pool, ordering meals from the spa menu, and splashing beneath the outdoor lava rock shower.

Another must-do in Kaua`i is to join a walking tour through Allerton Garden. As part of the National Tropical Botanical Garden (NTBG), the 80-acre paradise is situated beside Lawa´i Bay, and it’s rumored that Jackie Kennedy stayed there while recovering after the assassination of her husband. The nonprofit is also a research center that’s maintaining a protected seed bank of millions of Hawaiian plant, flower, and tree species in facilities capable of withstanding hurricanes and earthquakes. Director Tobias Koehler says that in case of a disaster, the NTBG will be able to regrow the island’s native plants. “Every few months, we open a drawer and check on our seeds, and we sprout a few of them to make sure they are OK,” he says. 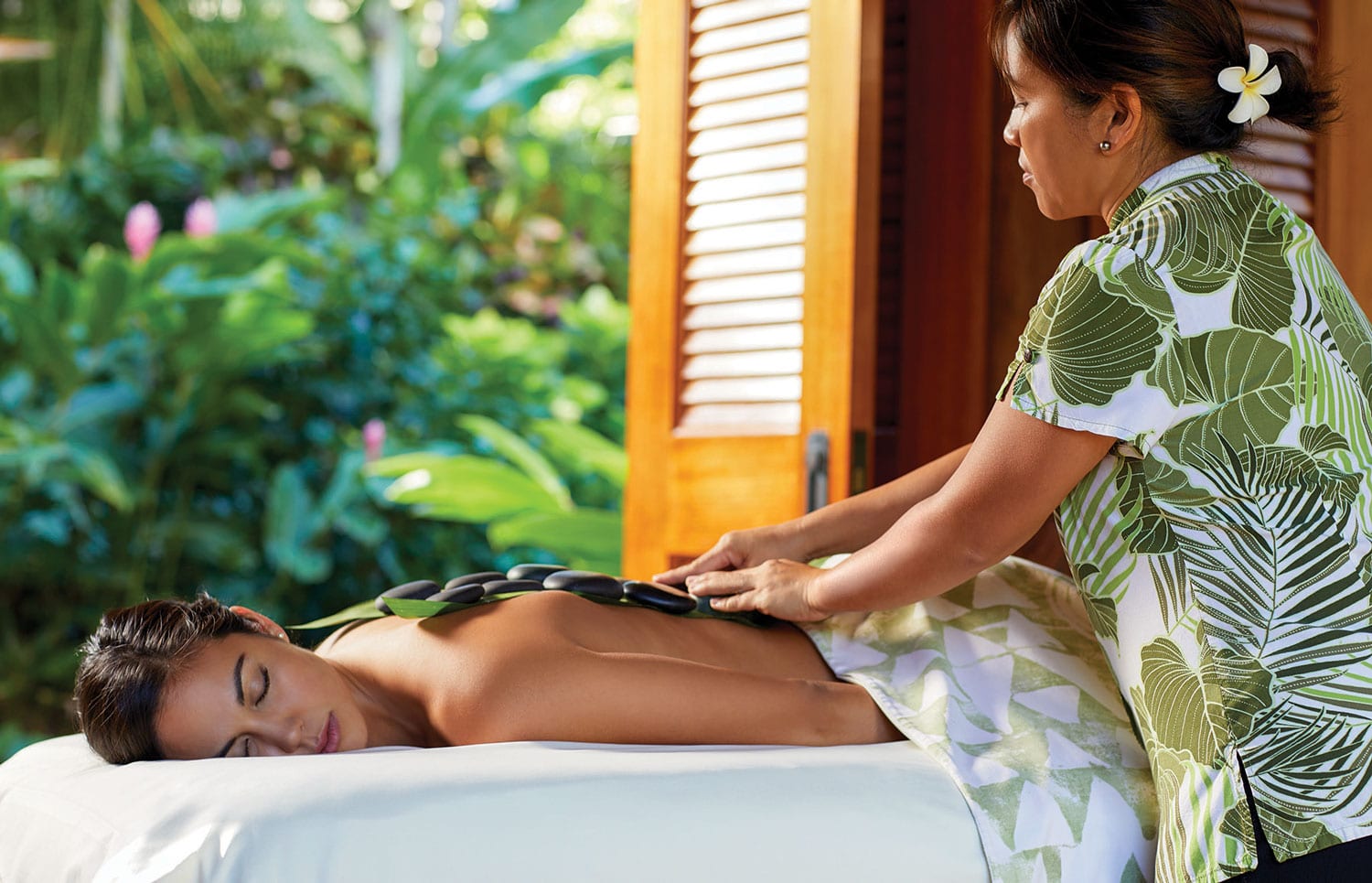 The “wow” moment of Allerton Garden occurs when visitors suddenly see the towering lineup of Moreton Bay fig trees with above-ground, snake-like roots so large an adult can hide among them. A nest of dinosaur eggs was hidden there in “Jurassic Park.” 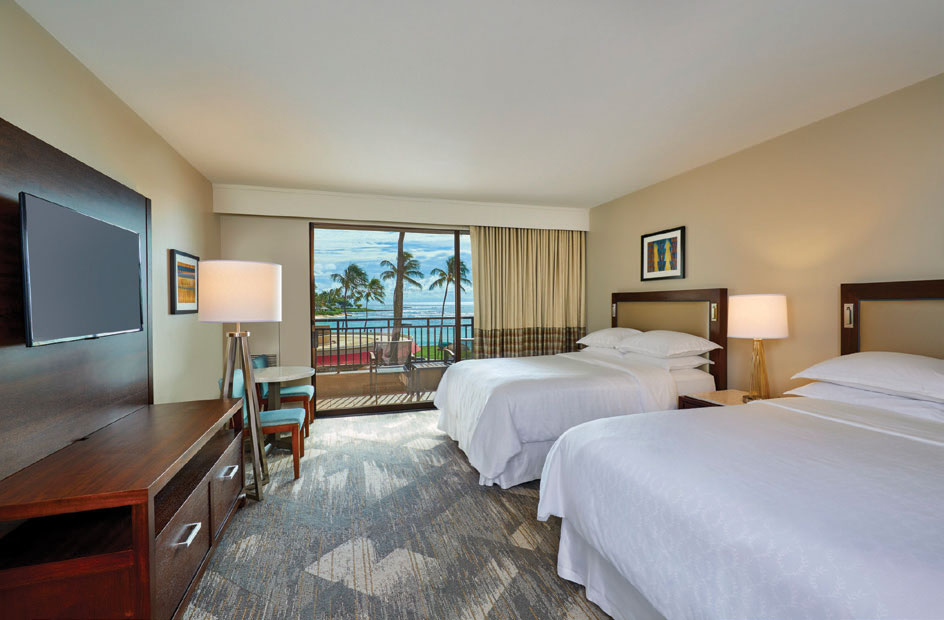 A room fronting the Pacific Ocean at the Sheraton Kaua`i

Driving around Kaua`i is easy, although the two-lane roads often get clogged with traffic. Island treasures include the north side’s National Wildlife Refuge for the popular red-footed booby, the west side’s Waimea Canyon, known as the “Grand Canyon of the Pacific,” and the Spouting Horn blowhole, where the ocean channels into a lava tube and shoots some 50 feet into the air. Easily accessible waterfalls include the double-tiered Wailua Falls; Opaeka`a, with several fingers of trailing water; and Waipo`o Falls, sandwiched in a cleavage of Waimea Canyon. 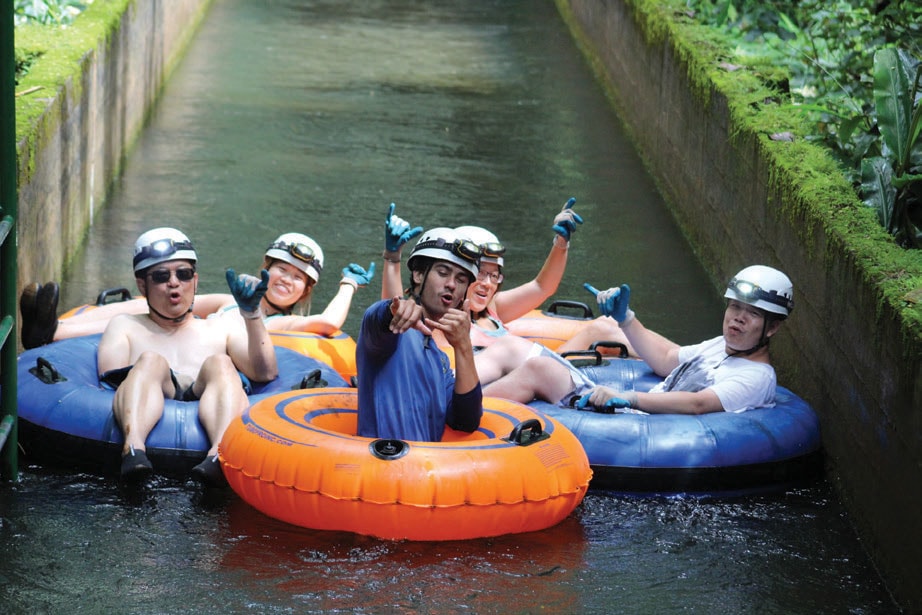 Being as lush as it is in Kaua`i, rainy days are common. When downpours happen, get your dose of culture by ducking inside a museum, hotel, or gallery. Housed in a former stone library, the Kaua`i Museum offers great shelter where you can get your bearings with history. Marvel at feather capes and other artifacts from royal dynasties. Find Hawaiian murals and original artwork at the Grand Hyatt Kaua`i. And at the Kaua`i Marriott Resort, the Ocean Gallery showcases hand-blown glass, watercolors, and other works by local artists. 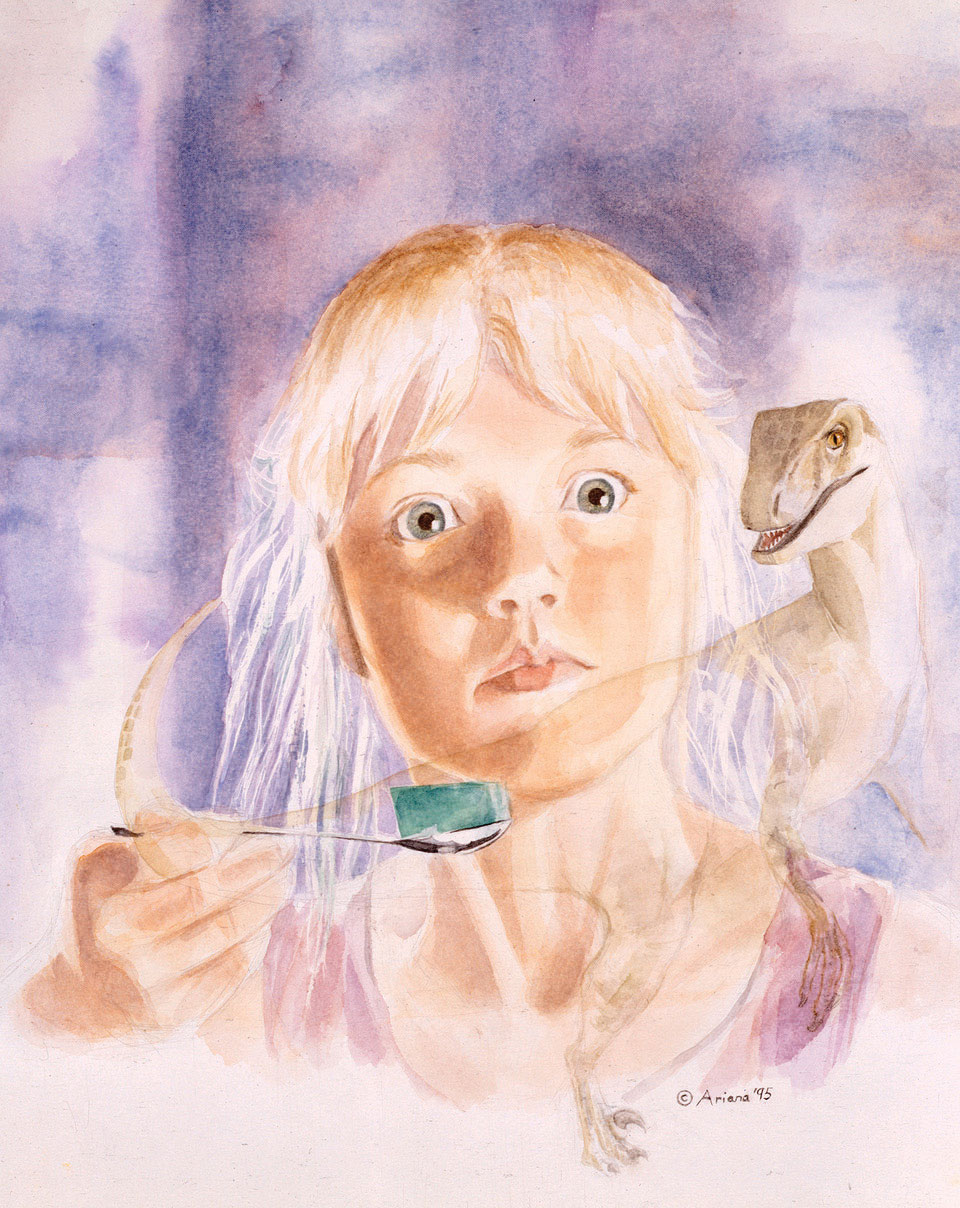 Hanapepe is considered Kaua`i’s art town, and every Friday night it hosts a gallery walk with food trucks and live music. In historic Koloa, the Smith Memorial Parsonage is also the home and studio of watercolorist Alan Akana, who paints Hawaiian flowers in painstaking detail. The east side’s charmed Kapa`a enclave features Kela’s Glass Gallery, Aloha Images, and Earth & Sea. When you want to peruse several art galleries in close proximity, the Shops at Kuku´iula outdoor mall and the restored Kilohana Plantation will satisfy your desire for photography, paintings, pottery, sculpture, furniture, and handmade gifts.

Food is essential to Hawaiian culture, and on Kaua`i, shaved ice with local fruit flavors is a favorite. Vendors such as Wailua Shave Ice sell this delicacy, with options for ice cream and toppings of every ilk, from a food truck in Kapa`a. Sushi and poke are staples, and little fish delis, such as the Fish Express, have locals lining up out the door.

Kaua`i, the movie island, the adrenaline island, and the cultural island, leaves no one out. Best times to visit weather-wise are from April to June and September to November. While crowing, feral chickens can be a nuisance and costs are high, Kaua`i’s coastline, greenery, aloha spirit, and laid-back lifestyle draw you to this magical gem. Reflects Richards, “There’s a feeling of peaceful, uncharted territory for visitors to the island; a place that will always be clothed in a certain sense of quiet mystery. It will always be my favorite Hawaiian island and is filled with memories.”