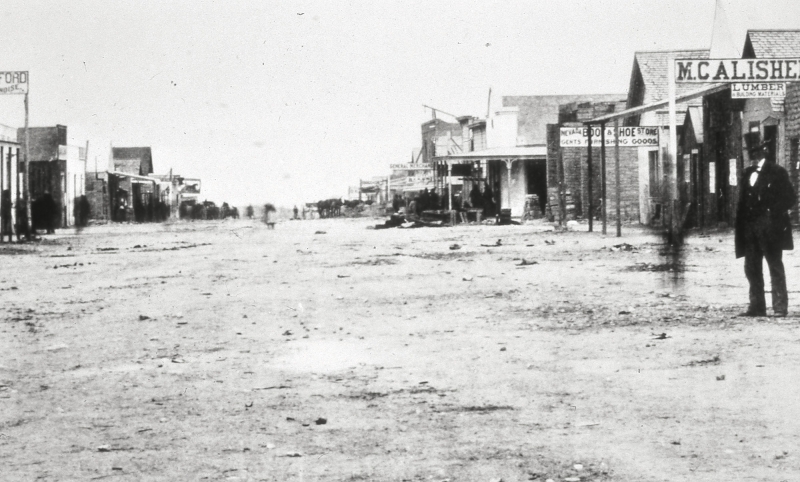 Tombstone, Arizona, is full of Western stories, many of which are based in actual history. It was the site of America’s most notorious shoot-out: the gunfight at the O.K. Corral; it was a mining boomtown discovered by a prospector who was told his exploratory efforts would only find him his “tombstone;” and throughout its downtown are restored buildings that once symbolized progress for any frontier town founded in the late 1800s: a newsroom, saloons, eateries, schools, a red-light district and churches.

“People come here and say they can feel the history and the ghosts of the past. They pass through the same spaces as Wyatt Earp and Doc Holliday. They can go to the O.K. Corral to walk where they walked and stand where they fell,” says Kenn Barrett, secretary of the board of directors for the Tombstone Chamber of Commerce. “Tombstone is where the Old West really happened. There may be other towns associated with the Old West, like Dodge City or Deadwood, but Tombstone still looks the same and has the same vibe.”

According to a history provided by the Chamber of Commerce, Tombstone was founded in 1879 by Ed Schieffelin, a prospector who joined a camp of Native American scouts for the U.S. Army. From the camp in the Huachuca Mountains, Schieffelin could accompany soldiers into the backcountry of Arizona Territory, looking for ore in areas untouched due to the presence of hostile Apaches. Fellow soldiers warned against his exploratory efforts, saying he would only find his “tombstone” in the desert near the San Pedro River. Fortunately for Schieffelin, he found silver in 1877 instead.

Schieffelin — distinctive by his matted hair, deerskin clothes and slouch hat — his brother, Alfred, and an engineer named Richard Gird established the Tombstone Gold and Silver Mining Company. Word spread about the silver strike, bringing homesteaders, cowboys, speculators, prospectors, lawyers and gunmen to a settlement situated near the mines.

That first strike led to other lodes, glisteningly named Lucky Cuss, Tough Nut, Grand Central and Contention. Today, The Good Enough Mine Tour takes visitors underground seven days a week to see how the ore was extracted in the 1880s. And visitors can stop by the Schieffelin Monument, about 3 miles west of Tombstone, near the wash where the prospector first struck silver.

Tombstone’s legend spread as a Babylon of the West, but as miners dug deeper, they hit the water table and the mines began to flood. By the end of 1893, all silver production in Tombstone halted and the mines were abandoned. Today, the city, an hour-and-half southeast of Tucson, has a population of about 1,300 people.

“To save the town, the city fathers decided to promote tourism,” says Barrett. “At the time, Western movies were popular, so promoting Tombstone as a Wild West tourist destination seemed like a natural fit.”

In Tombstone, on October 26, 1881, a “street fight,” as the Earps called it, went down in infamy when the formidable Doc Holliday and the Earp brothers — Wyatt, Virgil and Morgan — were mismatched against the cattle-rustling McLaurys and Clantons. When the dust settled after 30 seconds and about 30 gunshots later, three found early paths to the grave: 19-year-old Billy Clanton and Tom and Frank McLaury.

Despite gaining notoriety as “The Shootout at the O.K. Corral,” the gunfight actually took place in a vacant lot on Fremont Street and not at a horse corral, Barrett explains. “It was important to the cowboys that people associated the fight with the corral, as it was legal to carry your guns inside corrals if you were arriving or leaving town. The Daily Nugget newspaper, which was partisan to the cowboys, referred to it as being started in the O.K. Corral, even though it actually occurred well behind the corral,” he says. When in town, you can visit both sites and be thankful you weren’t around to irk the Earps. You can also visit Wyatt Earp’s house on Fremont Street, which he occupied until leaving town in 1882.

Despite a lackluster reaction to the first O.K. Corral gunfight reenactment in 1929, today reenactments are held at noon, 2 p.m. and 3:30 p.m. daily, with an extra show added during festivals or special events. The O.K. Corral charges $10 for adults and includes the reenactments along with access to the museum, historama presentation and a tour of the Tombstone Epitaph newspaper.

Other reenactments are scheduled at varying times and places throughout the day, including The Gunfight Palace and Old Tombstone Town. The Gunfighter Hall of Fame also offers a large collection of memorabilia that highlights the famous outlaws and lawmen of the day.

Many Tombstone legends began on Allen Street, which looks of its time, lined with adobe buildings. On the south side of Allen Street were respectable businesses; on the north, the bars, brothels, crib houses and casinos. The most notorious was The Bird Cage Theatre, which operated daily from 1881 to 1889, advertising “the wildest, wickedest night spot between Basin Street and the Barbary Coast,” according to a 1882 article by The New York Times.

Saloon, gaming parlor, theater and brothel, legend has it that the site was the last stand for 26 people and more than 120 bullet holes remain in its walls as testament. The theatre takes its name from the “bird cages” or cubicles set aside for prostitution.

Poker was played here — one hand on the cards, another on the gun — by Doc Holliday, Bat Masterson, Diamond Jim Brady, George Hearst and Adolphus Busch. Here, Wyatt Earp met Josephine Sarah Marcus, a performer and bordello room escort, who became his fourth wife (common law) until his death in 1929. Although the Bird Cage is — we’re told — haunted, it’s worth a visit.

A short walk away is the Tombstone Historic Courthouse, a red-brick Victorian with a cruciform layout and charming cupola. Built in 1882 for $50,000, it is now used as a museum. The surrounding Tombstone Courthouse State Historic Park, Arizona’s first and smallest state park, contains a courtyard and a replica gallows where seven men were hanged.

One block south of Allen Street is the Rose Tree Museum, opened in 1964 to celebrate the pioneering Robertson-Macias family. Inside the museum, find memorabilia from early Tombstone settlers, a bookstore and dioramas of the Lucky Cuss Mine and other landmarks.

Nearby, Schieffelin Hall was built in 1881 and it was fully restored in 1963. It is the largest standing adobe structure in the Southwest and served various purposes as an opera house, recital hall, theatre, meeting place and home of the local Masonic Lodge. A contributing property of the Tombstone Historic District, the hall was listed on the National Register of Historic Places in October 1966.

For some, Tombstone is an Old West fantasy camp. Find chaps, reproduction clothing and other Western apparel at Bronco Trading Co. and Spur Western Wear. “We encourage visitors to wear 1880s attire, as many locals do on a daily basis,” Barrett adds. “Tombstone is the only place you can go, and, if you dress up, you become part of the show.”

For “provisions,” the O.K. Cafe is a local favorite for breakfast and lunch, as is the Longhorn Restaurant. Cafe Margarita offers Mexican and Italian fare in the former Russ House, which opened in 1880. The Depot is open for lunch and dinner as is the much-frequented Big Nose Kate’s Saloon, recalling the woman who was probably the town’s first “boomtown belle.” “It’s loud and fun, with a not-to-be-missed downstairs featuring a secret mine shaft,” Barrett says.

“Tombstone represents a great chapter in American history: the rugged Old West, mining, cattle rustlers, famous gunfighters and lawmen, ladies of the night and upstanding folks who put their roots in Tombstone in the 1870s and 1880s,” says Gordon Anderson, owner of the downtown Larian Motel and assistant director of international tourism for the city. “It also represents what America is all about: courage, vision, passion and the ability to overcome all obstacles. It’s the town that is truly ‘too tough to die’ and a shining example of the American dream, past, present and future.”

While Tombstone is rich with history, there’s much a-glimmer outside of town, too, so rise with the sun and enjoy Cochise County.

Hike amidst the granite domes and cliffs  of Cochise Stronghold in the Dragoon Mountains, the winter home of Chief Cochise and the Chiricahua Apache; cochisestronghold.com.

Take a quick trip to the mining town of Bisbee, an arts colony with shops, restaurants, an art deco courthouse and ghost tours; bisbeearizona.com. Gleeson and Charleston are nearby ghost towns you can visit. 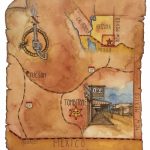 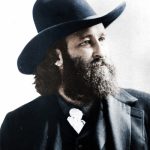 Tombstone’s founder, Ed Schieffelin. His will stipulated that he be buried in mining clothes, with pick, shovel and canteen. And so it was, when he died 3 miles from town. Photo: Goose Flats Graphics 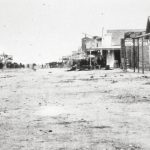 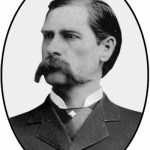 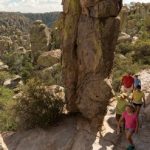 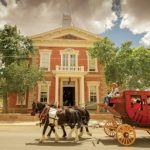 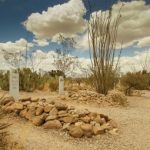 Boothill Cemetery is a good place to start your visit to Tombstone, less favorable, perhaps, for ending it. Find the grave of Florentino Cruz, killed by Wyatt Earp in retribution after his brother Morgan was murdered on Allen Street. Photo: Arizona State Parks 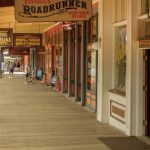 Russell’s Roadrunner Western Store is one of many shops and restaurants on Allen Street. Photo: Arizona Office of Tourism 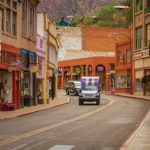 With its well-preserved and restored historical buildings, the once booming mining town of Bisbee, 23 miles from Tombstone, has been revivified as a home for art, music and hospitality. Photo: Arizona Office of Tourism 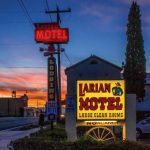 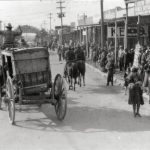 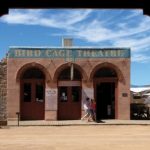