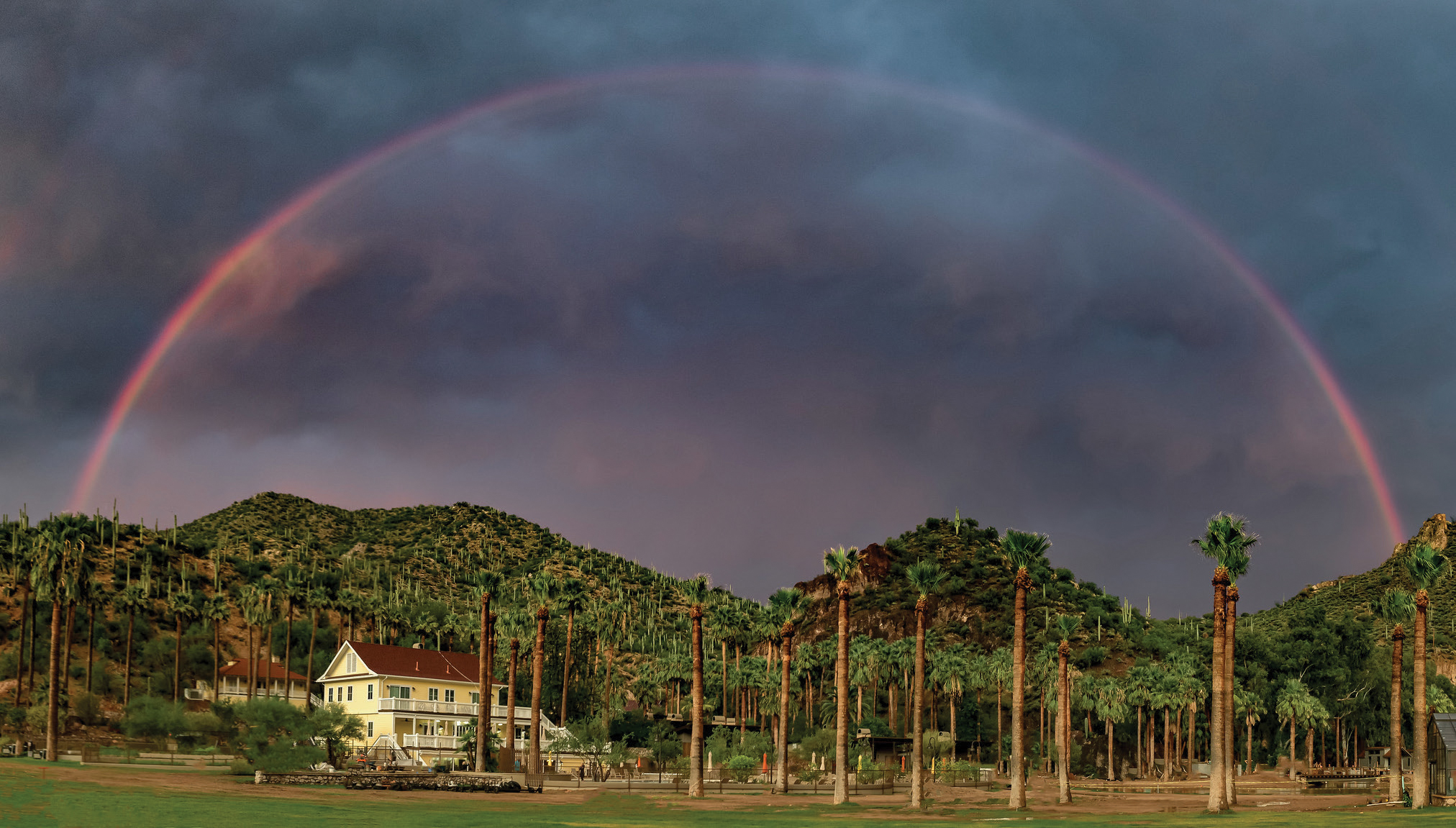 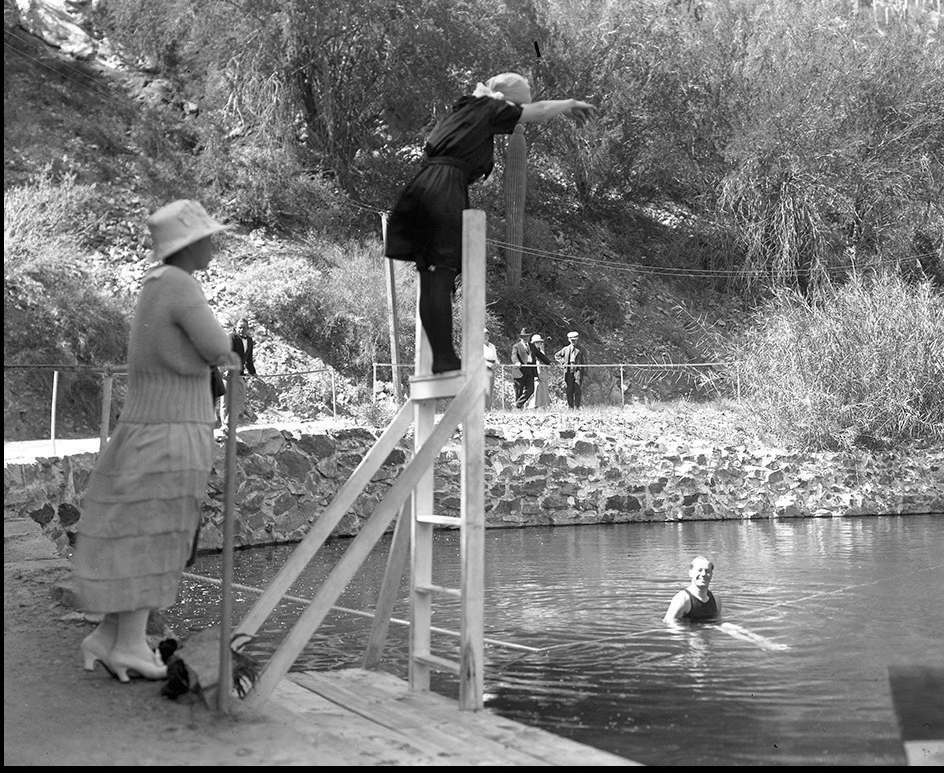 In a historical photo, a guest dives into the springs in fashionable swimming attire. Photo courtesy of Castle Hot Springs

After 43 years as a chain-linked “ghost resort,” the nearly 125-year-old property re-opened in February 2019. Located about 50 miles northwest of Phoenix, in the high desert canyons of the Bradshaw Mountains, the resort was redesigned with relaxation and luxury in mind. 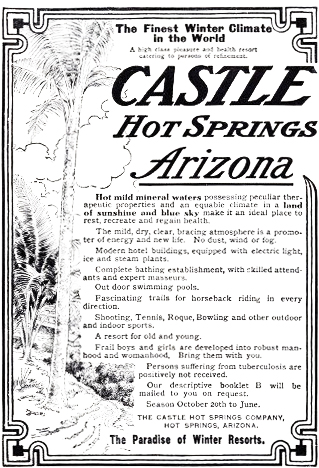 In addition to guest rooms, the property includes amenities that offer memorable views of the surrounding desert landscape. The soaking pools are fed by more than 220,000 gallons of 120-degree-Fahrenheit mineral water that spurts from the mountainside each day. Thrust up from a 10,000-foot-deep cistern, these are thought to be the world’s only hot springs created in the Earth’s mantle. A large swimming pool and rooms with access to private soaking tubs are offered, and at the upper springs, guests can enjoy an immersive experience and relax at the spa cabana. 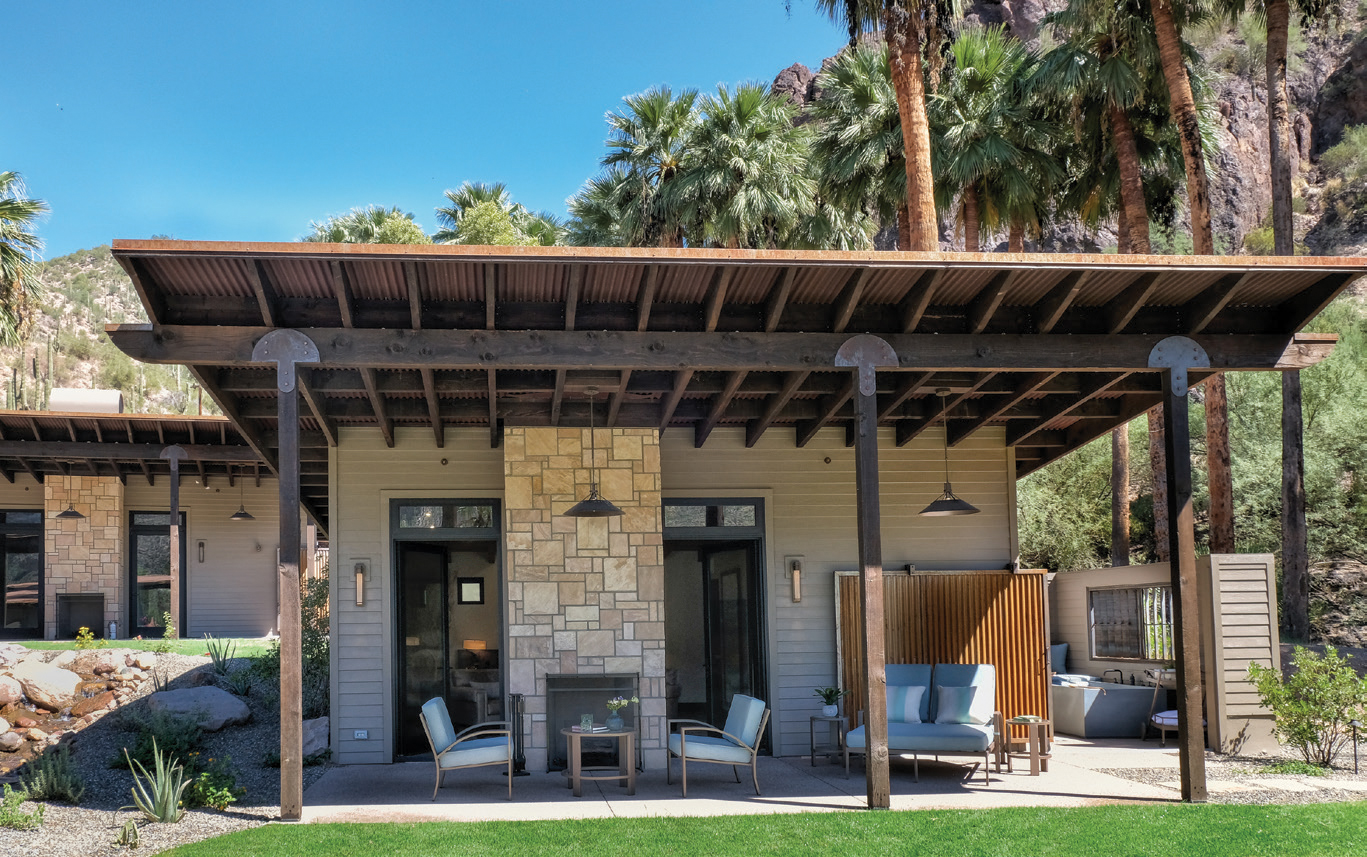 The high lithium content in the spring water provides an additional soothing element to the property, which Phoenix entrepreneur Frank Murphy opened in 1896 as a health haven for gentry suffering from tuberculosis and other maladies. Later, “taking to the waters,” Arizona style, was marketed as a “rendezvous for the worn-out businessman or capitalist.” Here, some of Arizona’s first electric lights blinked to life and the first telephone call in Arizona was made by Nathan Oakes Murphy, the owner’s brother and former territorial governor. 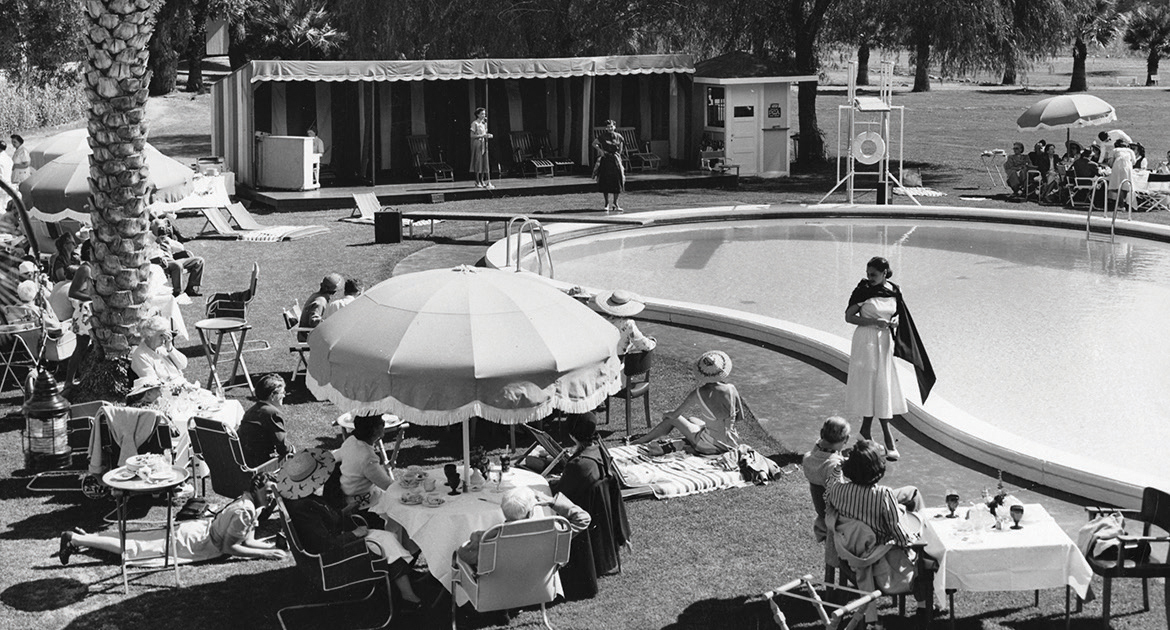 The resort’s pool is mostly original and has been enjoyed by generations of guests, including those watching a fashion show a half-century ago. Photo courtesy of Castle Hot Springs

In December 1976, a fire destroyed much of the original resort, including the 60-room hotel. After a series of ownerships, the 210-acre property was re-opened by Scottsdale-based developer and resort manager Westroc Hospitality, under the direction of owners Mike and Cindy Watts. For the remodel, Doug and Kevin Edwards of Scottsdale’s Edwards Design Group incorporated a variety of sustainable features. And Valerie Borden, principal of Chimera Interior Design in Scottsdale, created the comfortable interiors. 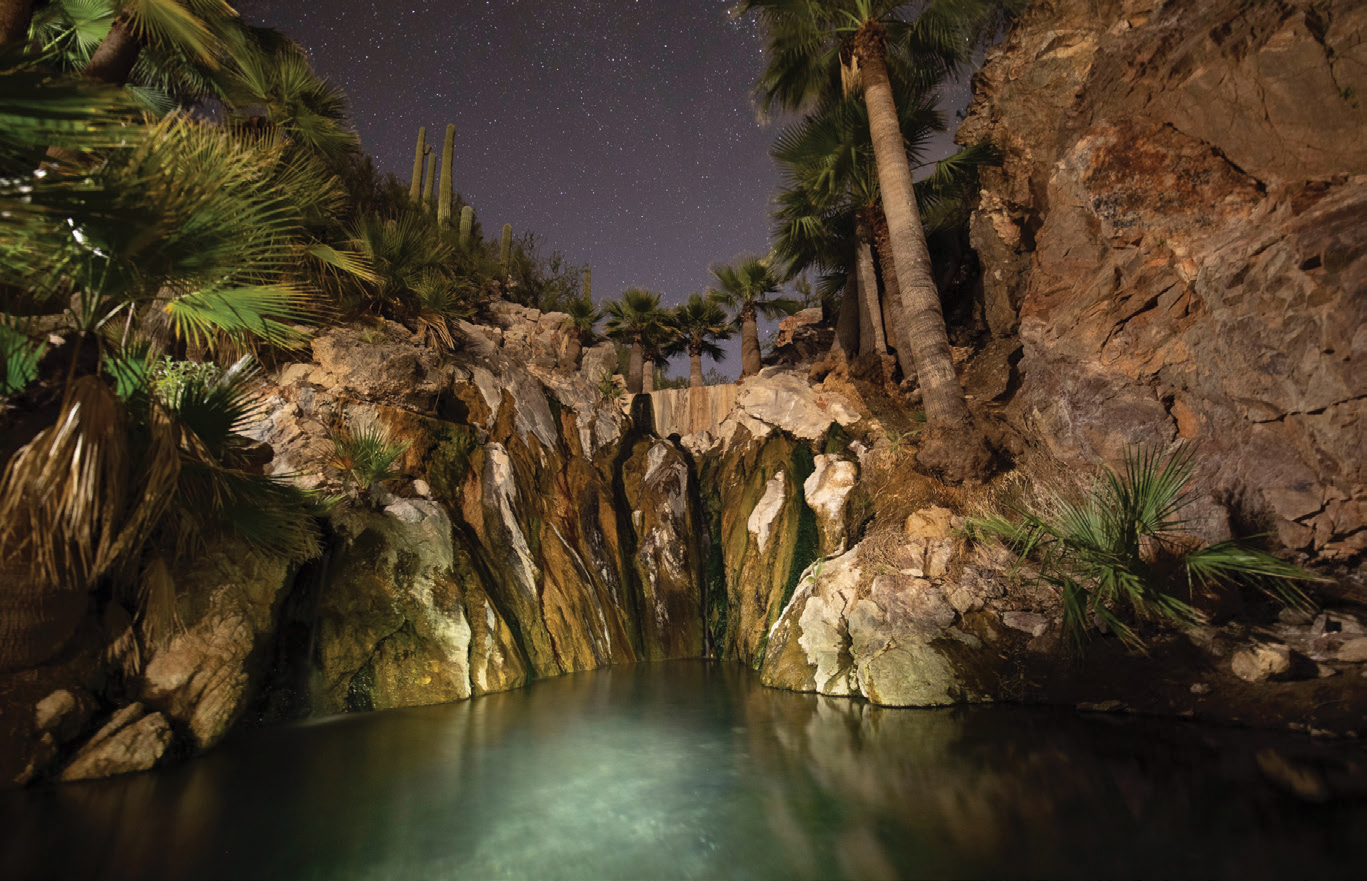 At night, the resort is magical: Enjoy both the waters and the heavens. Photo by Robert Pflumm & Quantum Leap Productions

The setting and therapeutic nature of the property has attracted many “creative types” over the years. Artist Maxfield Parrish first visited during the winter of 1901 and returned the following year after contracting tuberculosis in his native Pennsylvania. While staying, he completed 19 illustrations to accompany “The Great Southwest” articles written by Ray Stannard Baker for Century Magazine, according to historian Vincent Murray in his application for the National Register of Historic Places. German-born architect Walter Gropius and his wife Ise also made pilgrimages to Castle Hot Springs every March for 10 years to welcome spring to the desert, a contrast from chilly New England where he taught at Harvard University.

The sky becomes a light show after sunset; appropriately, each Sky View Cabin has a telescope to view planets and shooting stars. Photo by Tallwave

Today, guests can feel rehabilitated at the mountain refuge. They can check in, dine, and stay at the Dutch Colonial-style 1896 Lodge House, formerly called the Kennedy. Across from this is The Cottage, built later in a similar style. Adjacent to this is the early-20th-century Stone House, which was rebuilt during the restoration from the rubble of the original, supplemented by locally quarried rock. The building, which once had a wooden second story, flexes as a chapel for weddings and other events. The Edwards Group designed 12 Spring Bungalows and 17 Sky View Cabins, with oversized hot springs-filled tubs. 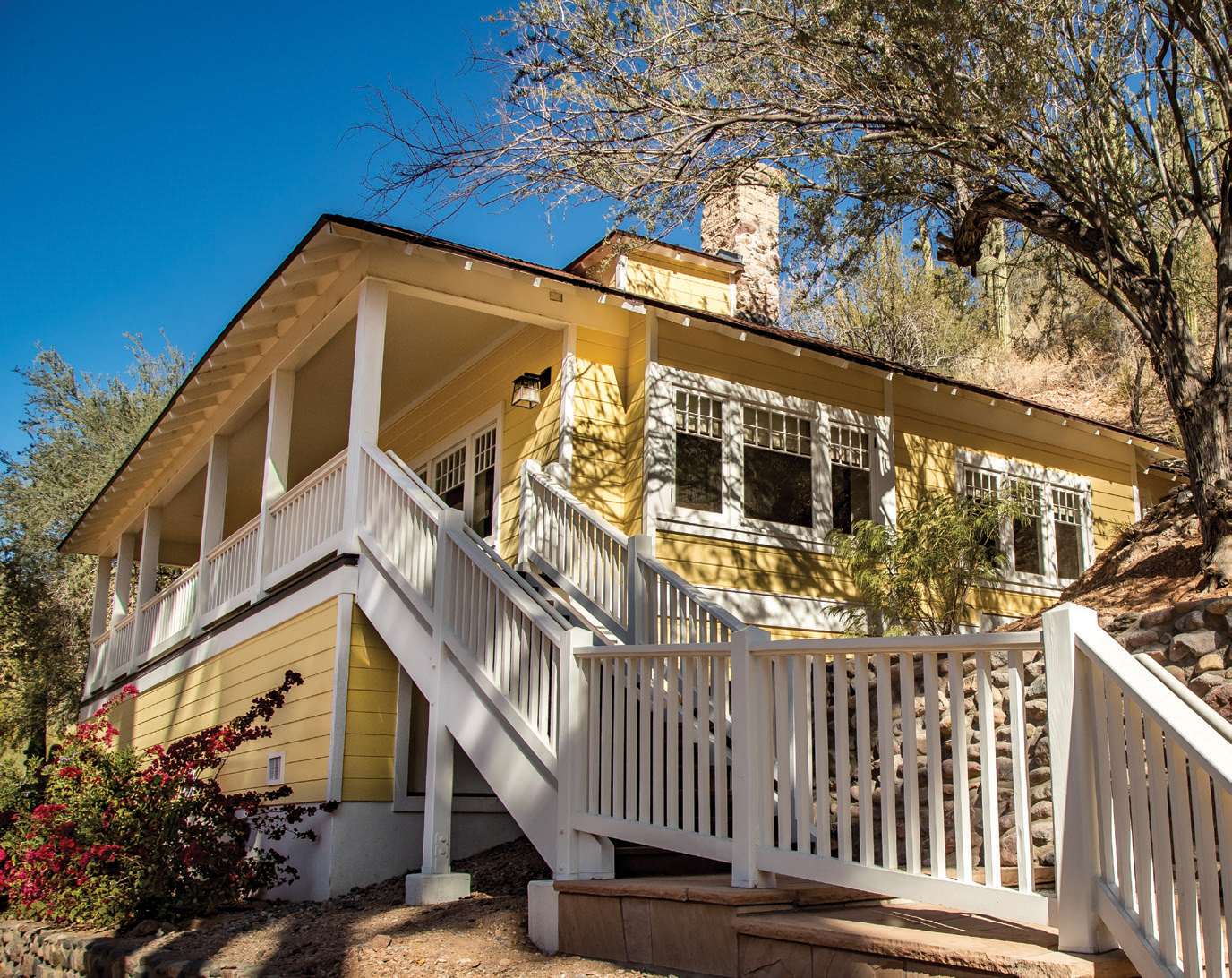 The Cottage is a 1,200-plus-square-foot, three-room house, perfect for groups. Photo courtesy of Castle Hot Springs

“The Castle Hot Springs project is an eclectic mixture of restoration, modern contemporary architecture, and development. It’s one of the most majestic and unique places on earth,” Doug Edwards says. “We were privileged to be given the opportunity to bring it back to life.” 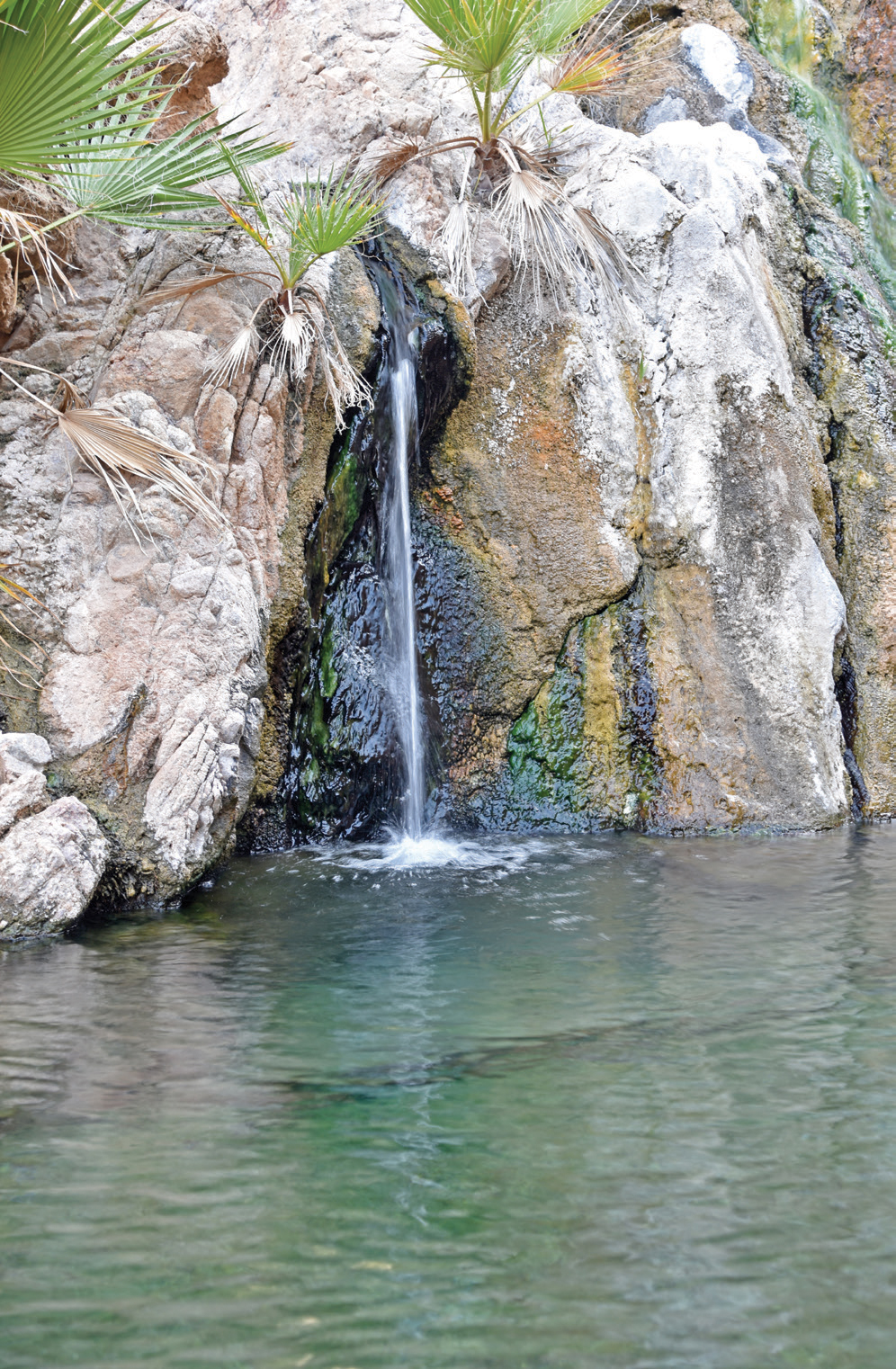 Mineral water issues from the Bradshaw Mountains, and guests can immediately enjoy its therapeutic benefits. Photo by Tallwave