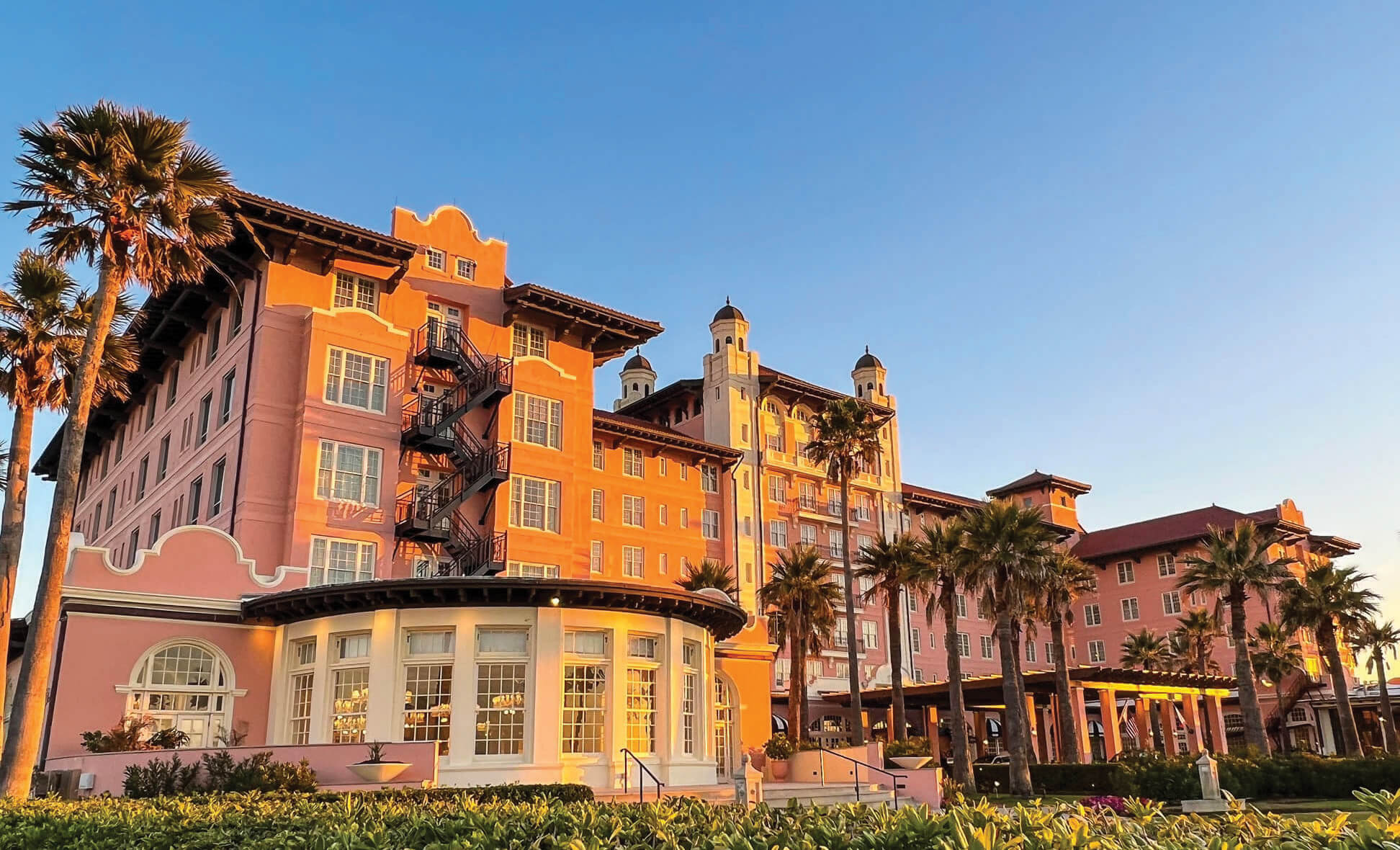 The Grand Galvez’s signature pink exterior replicates the warm, sunset shade chosen by the original owners. It is the only historic beachfront hotel on the Texas Gulf Coast. Photo courtesy of Grand Galvez/Seawall Hospitality LLC

06 Sep Western Landmark: Queen of the Gulf: The Grand Galvez

Overlooking the Gulf of Mexico, approached by an allée of tall palm trees, the Grand Galvez stands as it has for more than a century. Newly renovated, the hotel exceeds her original grandeur, incorporating the elegance of the Gilded Age, enlivened with the charisma of jazz and the glamor of the Gatsby Era, and topped off with 21st-century conveniences.

In 1900, Galveston, Texas, was struck by a hurricane, the deadliest natural disaster in U.S. history, resulting in 6,000 to 12,000 casualties and destroying two-thirds of the city’s buildings. Over the following 10 years, workers built a 17-foot seawall and elevated the grade level of the entire city to prevent future destruction. 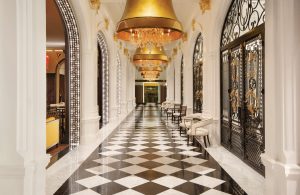 In February 1910, Galveston civic leaders met to discuss constructing a grand hotel on the beachfront. The Grand Galvez was built with $1 million following the devastating 1900 hurricane. It opened on June 10, 1911, and Galveston was reborn as a vacation destination.

The hotel’s name honors Bernardo de Gálvez, a Spanish hero of the American Revolution. Later, as Viceroy of New Spain, he ordered a survey of the Gulf Coast. The mapmaker named a large bay the Bahía de Galveston for the Viceroy, whose coat of arms bore the motto “Yo solo” (I alone). It seemed appropriate to the hotel’s founders to adopt this slogan, since they had undertaken the project without monetary support from outside the Galveston community. 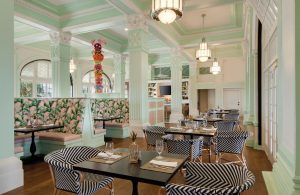 The last 100 years were not always kind to the “Queen of the Gulf,” the only remaining grande dame hostelry on the Gulf Coast. She has survived several owners, ridden through storms, and was even up for auction. But, fortunately for the hotel, in the 1990s, the Grand Galvez was purchased by George and Cynthia Mitchell, who were active in the restoration and preservation of Galveston’s architecture. The Mitchells pulled the hotel back from the brink of disaster with major renovations. 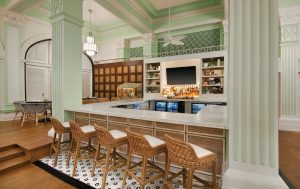 In 2021, Mark Wyant, CEO and owner of Seawall Hospitality LLC, purchased the hotel, and was determined to do his part to make the property a crown jewel of the Gulf Coast once again. Wyant and his wife, Lorenda, conducted extensive research, identifying elements that made the 1911 hotel iconic. The restoration required taking many areas down to the studs, removing walls that covered original features, recreating decor, and repairing elaborate plasterwork. Interior design is Lorenda’s forte and, between them, the couple created the ambiance of a more elegant age while adding some unexpected touches. Doors to the meeting rooms on the north side of the hall are glass and hand-wrought iron, replicas of earlier Galvez doors. Wood paneling was restored, and a portrait of Bernardo de Gálvez was moved to a prominent position on the staircase’s first landing. Among other changes, perhaps the most noticeable was repainting the hotel’s exterior to resemble its original pink color. 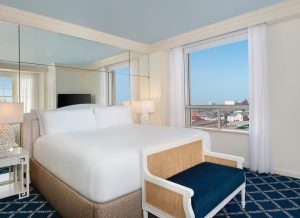 There are more than 220 guest rooms and six suites at the Grand Galvez. The indigo and white guest rooms feature Egyptian cotton sheets and down duvets. Photo courtesy of Grand Galvez/Seawall Hospitality LLC

An important component of the restoration was Peacock Alley, which was once a prime promenade for ladies parading their evening finery and a popular spot for people-watching. Paved with black and white marble squares and lit with Baccarat chandeliers hanging from large golden bells, the long, west hall leads from the lobby to the ballroom and spa.

A major, new addition to the lobby is a 6.5-by-42-foot Murano glass tile mosaic designed by the Wyants and produced by mosaic artist Julie Richey. It features the sobriquet “Queen of the Gulf” in gold, surrounded by festoons of multi-colored oleanders, the signature flower of the property. 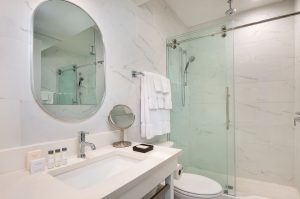 “We have great respect for the iconic architecture of this property,” says Wyant. “I can assure everyone that our vision for the ‘new’ Grand Galvez will honor the historic design, offering a refreshed elegance throughout the hotel.”