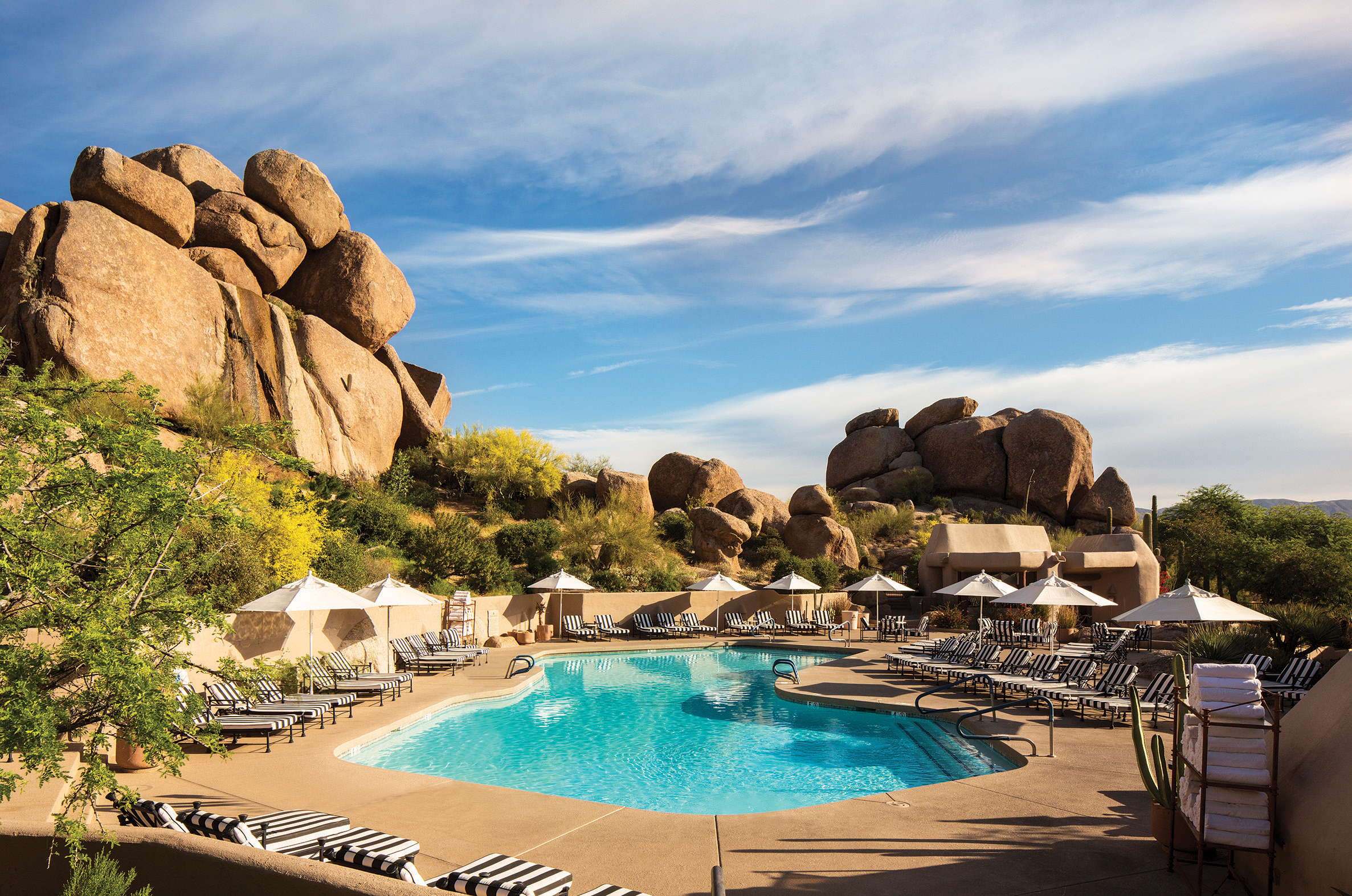 In the early 1980s, what others saw as a pile of rocks, developer Rusty Lyon envisioned as a world-class destination. He snapped up 13,000 acres filled with boulders and cacti in the High Sonoran Desert foothills of Arizona. Then, he tapped architect Bob Bacon to design a grand resort that would capture the essence of the environment but create little disturbance to the landscape.

Bacon was a former student from prestigious Taliesin West, the Frank Lloyd Wright School of Architecture. And little did Lyon know that Bacon was already familiar with the location; during Bacon’s Arizona State University days in the mid ’60s, the architecture major drafted plans for a meditation chapel on that very site. 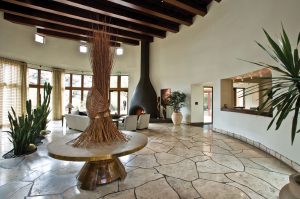 The renovated lobby in the 33,000-square-foot spa features Native American art and furnishings.

The chapel was only a mock-up class project and never materialized, but Bacon will never forget how he was “struck by the awesome scale and soft, angular, but irregular shapes of the boulders themselves,” and he was equally “fascinated by the intimate spaces juxtaposed between them.” His creative process was organic; he spent more than a year living on the premises, hiking and poking around the crevices, and studying the movement of the sun.

After contractors broke ground, they fastidiously replanted any shrubs, flowers, or trees that were removed for construction. According to Lyon’s direction, not one fragment could be accidentally chiseled off the precious granite rocks and giant hamburger-like slabs. Nothing in the construction process, or the use of materials, glues, or paints, would be allowed to harm the desert animals, such as jackrabbits and javelina. It was imperative that all terrain and wildlife would continue to thrive. The developers did add, however, indigenous plantings and human-made streams that melded seamlessly into the landscape. 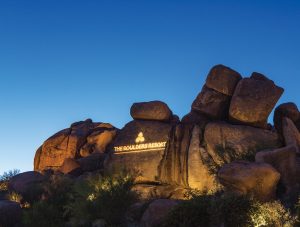 The geology of the natural landscape captured the heart of developer Rusty Lyon in the early 1980s.

By January 1985, the resort opened in the town of Carefree, Arizona, not far from trendy Scottsdale. Owned by Rock Resorts, the property featured two golf courses, restaurants, and 160 individual casitas. Over the years, the resort would trade hands, and it is now under the parent company Columbia Sussex Corp., managed by the Hilton Curio Collection.

With a recent $8 million, two-year renovation of the entire resort, its largest to date, today’s Boulders Resort & Spa boasts an updated attitude while respecting ancestral roots. There are still 160 detached casitas, as well as 57 larger villas and haciendas. The sand-colored adobe-style casitas are low-rise and blend into the rocks. They are crafted to look like a natural phenomenon, as if ancient people had hewn these dwellings. Some structures are tucked between the rocks, others are located on the perimeter. The embedded buildings, set in nature’s living room, serve as role models for architecture students and keen fans of Southwestern art and design, who often request site tours. 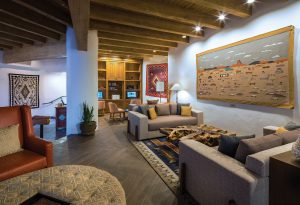 Tapestries on the walls and floors of the main lobby depict the Sonoran Desert landscape and culture.

While Lyon would be very proud of the two championship golf courses, 11 professional tennis and pickleball courts, four swimming pools, 33,000-square-foot spa, and five gourmet restaurants, the boulders themselves will always be the literal rock stars of the property.

“The ancient granite boulder formations that surround the resort are estimated to be 12 million years old,” says general manager Sally Shaffer. “For centuries, people have felt an affinity for these extraordinary boulders that are especially surreal when our Arizona desert sunset casts a warm golden glow over them.”

Today, the new interpretation of the interiors echo Native American traditions. To adequately prepare for the job, the interior designers headed to the nearby Heard Museum to research the region’s history and people. Their collected knowledge is reflected in the custom artwork, such as the wood inlay reception desk and patterned pictures that hang above the beds, a style that reflects the handicraft of the Hohokam tribe that used to inhabit the area. 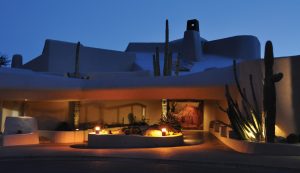 Carved wooden doors mimic the rocks at the resort’s entrance.

Teal and burnt orange are the designated hues echoing nature, accented in the rugs, walls, and furnishings. The team commissioned local artists to paint, sculpt, weave, and carve pieces that reflect the horizon, rock colors, and shapes during different times of the day.

And just as the interiors harken to times past, the Boulders Resorts’ ecological stewardship does the same. It has won two prestigious environmental awards while balancing the overall objective to provide a sanctuary for health and well-being. The spa relies on organic products and borrows techniques from ancient wellness treatments. The resort operates a 5,600-square-foot certified organic garden of fruits, herbs, and vegetables, which are incorporated in restaurant dishes and spa recipes.

In accord with its green priorities, Boulders Resort has installed fixtures to conserve water and energy, and uses eco-friendly cleaning products. The site limits the amount and intensity of artificial lighting, so there is little to no light pollution muddying the starry Arizona skies. 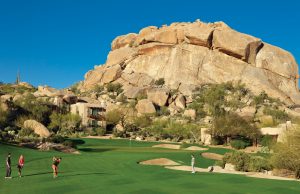 Players tee off on one of two golf courses located on the property.

According to Shaffer, newcomers and repeat vacationers will find a sense of peace with the resort’s refreshed look and feel. “The Boulders is often referred to as a ‘peaceful paradise;’ so many of our returning guests love the privacy and space of their individual casitas,” she says. “Everything is right here on the resort grounds, so after they check in, they never want to leave. Few places in the world can match this beautiful natural setting.”