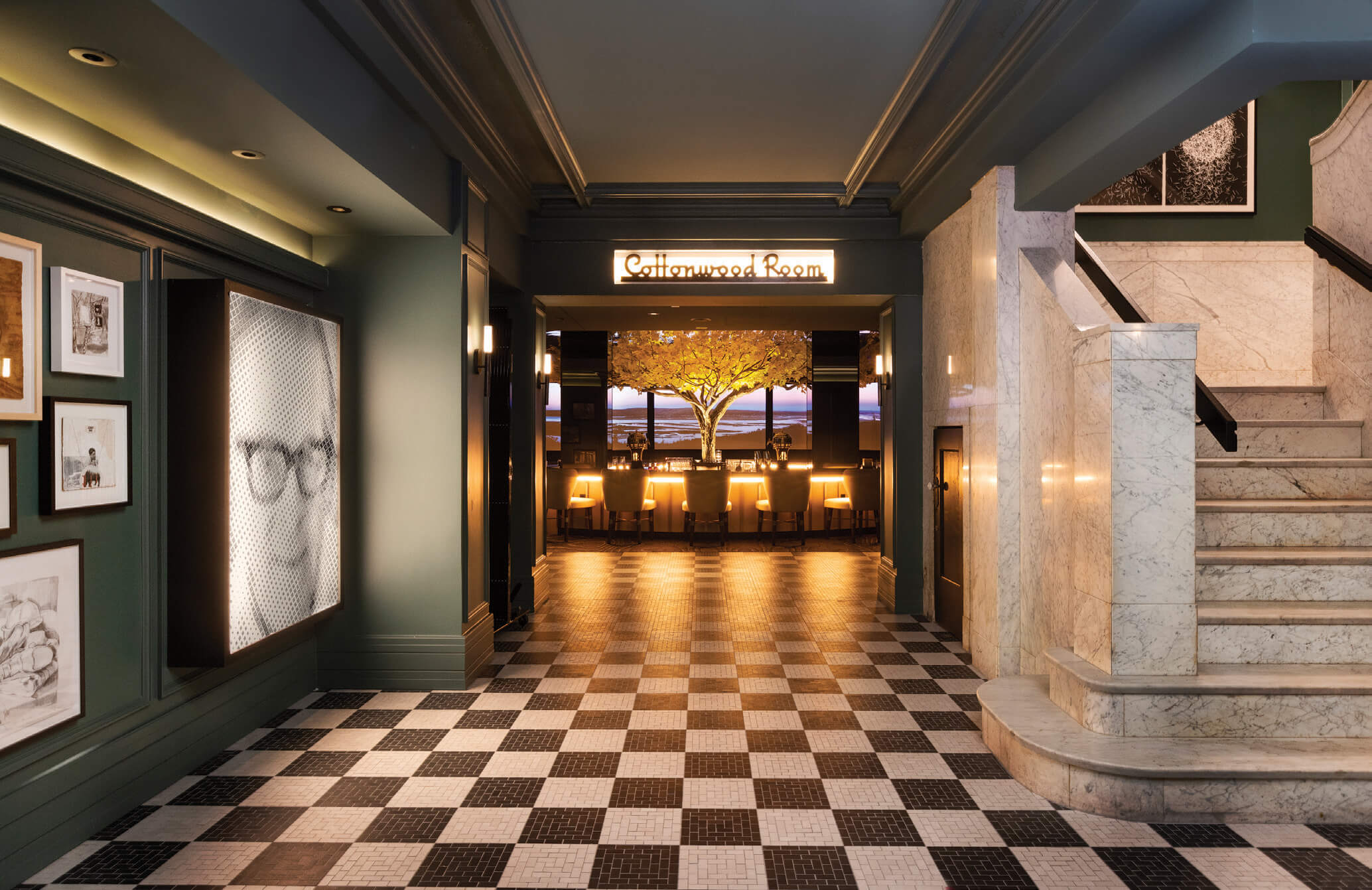 Staying true to its early 20th-century roots, the re-created Cottonwood Room on the hotel’s lower level is a modern take on a speakeasy, featuring a life-sized gold cottonwood tree that anchors the bar.

In the Roaring ’20s — a decade of prosperity as the U.S. bounced back from World War I — anyone who was anyone knew about the Blackstone Hotel in Omaha, Nebraska. Constructed in 1916 and converted into a hotel in 1920, it was a premier stop for travelers on the Union Pacific Railroad route between San Francisco and Chicago.

On any given night, the Blackstone’s Cottonwood Room was hopping, drawing Hollywood types, such as Bing Crosby and Bob Hope, while its restaurant, The Orleans Room, was a hot spot for the rich and famous and the place locals dined for special occasions. Every U.S. president through the 1970s stayed at the Blackstone. John F. Kennedy and Jackie Onassis spent their fifth anniversary there; and in 1968, Richard Nixon announced his campaign for the presidency in the rooftop ballroom. To top it off, Butter Brickle ice cream was invented at the Blackstone; as was the Rueben sandwich, named after Ruben Kulakofsky, a grocery store owner who participated in a weekly poker game with one of the hotel’s owners.

“The Blackstone Hotel was a pretty swanky spot for many decades, and it remained that way until the early ’70s,” says Jay Lund, a principal with GreenSlate Development. “It was converted into an office building for about 40 years and slowly declined. It went through a transgression like every other American city, as post-war auto developments created sprawl, leaving a need to revitalize downtowns as destination areas.”

Lund and his GreenSlate partners saw potential in the historic neighborhood around the old hotel, which was adjacent to the University of Nebraska Medical Center, one of the largest economic generators in the state. In 2013, they started buying and renovating buildings, revamping what’s now known as the Blackstone District, featuring apartments and a variety of locally-owned restaurants, breweries, and retail spaces.

In 2018, they were approached about buying the Blackstone building, which was declared an Omaha Landmark in 1983 and listed on the National Register of Historic Places in 1985. “Omaha didn’t have a really great historic hotel like people would expect of a town this size,” Lund says. “It was Omaha’s last shot at having a really cool hotel.”

The Kimpton Cottonwood Hotel opened its doors in November 2020 with much of the historic character of the Blackstone still intact, including the original hand-carved terra cotta columns, the grand marble staircase, tile, hardwood flooring, and all of the property’s 800-plus windows. With 205 guest rooms, including 31 suites, it also features a resort-style swimming pool, a revamped Cottonwood Room, The Committee Chophouse, which serves as the main restaurant, the Orleans Room for more casual meals, and a fully-restored rooftop ballroom. “It’s a really nice mix of a historic renovation, but with a modern twist on everything,” Lund says.

Partway through the project, Lund and his two partners researched hotel brands, and Kimpton, an independent one at the time, “felt like a real DNA match,” Lund says. “It seemed to be the perfect solution for us to maintain the unique quality of the property but also tap into national brand benefits.” The Cottonwood became Kimpton’s first franchise.

Like the original hotel, the interiors are unique throughout. “It was historically very ‘sceney,’” Lund says. “Moving from room to room was like traveling through a variety of scenes. And it’s now even more so; there’s a sense of discovery in the interior design and in the history that’s been uncovered, which enhances the experience for the guests.”

A large part of this is due to the hotel’s art program. During the design process, Lund turned to Watie White, a well-known Omaha artist and activist who felt strongly about giving a platform to the diverse range of Nebraska artists. As the curator, White selected 50-plus pieces created by Nebraska artists (more than half of them women), which tell “a certain autobiography of Omaha,” White says. “Because the artists were ones I either knew or whose work I loved, I reached out to each and arranged studio visits.”

White was looking for larger finished pieces, and he also commissioned some that “needed to address a specific space in the hotel, or work from an artist I really wished to include but whose available work was inapplicable,” he says. “There was a specific idea for the location of every piece. … Once we got to see the artwork in the actual building, a great deal of that was adjusted to react to the space and to fit with neighboring pieces. The artists within the collection are uniformly proud to be included.”

“The coolest thing is we were buying all this local art directly from artists right in the middle of COVID,” Lund adds.

Although opening amid the COVID-19 pandemic was a challenge, Lund undoubtedly sees the project as a success for the Omaha community. “It’s completely unique and authentic, and it’s the only grand historic hotel in Omaha,” he says. “It’s absolutely the anchor of the Blackstone District, and when it’s fully up and running [post pandemic], it should bring 150,000 unique visitors through its doors every year.”