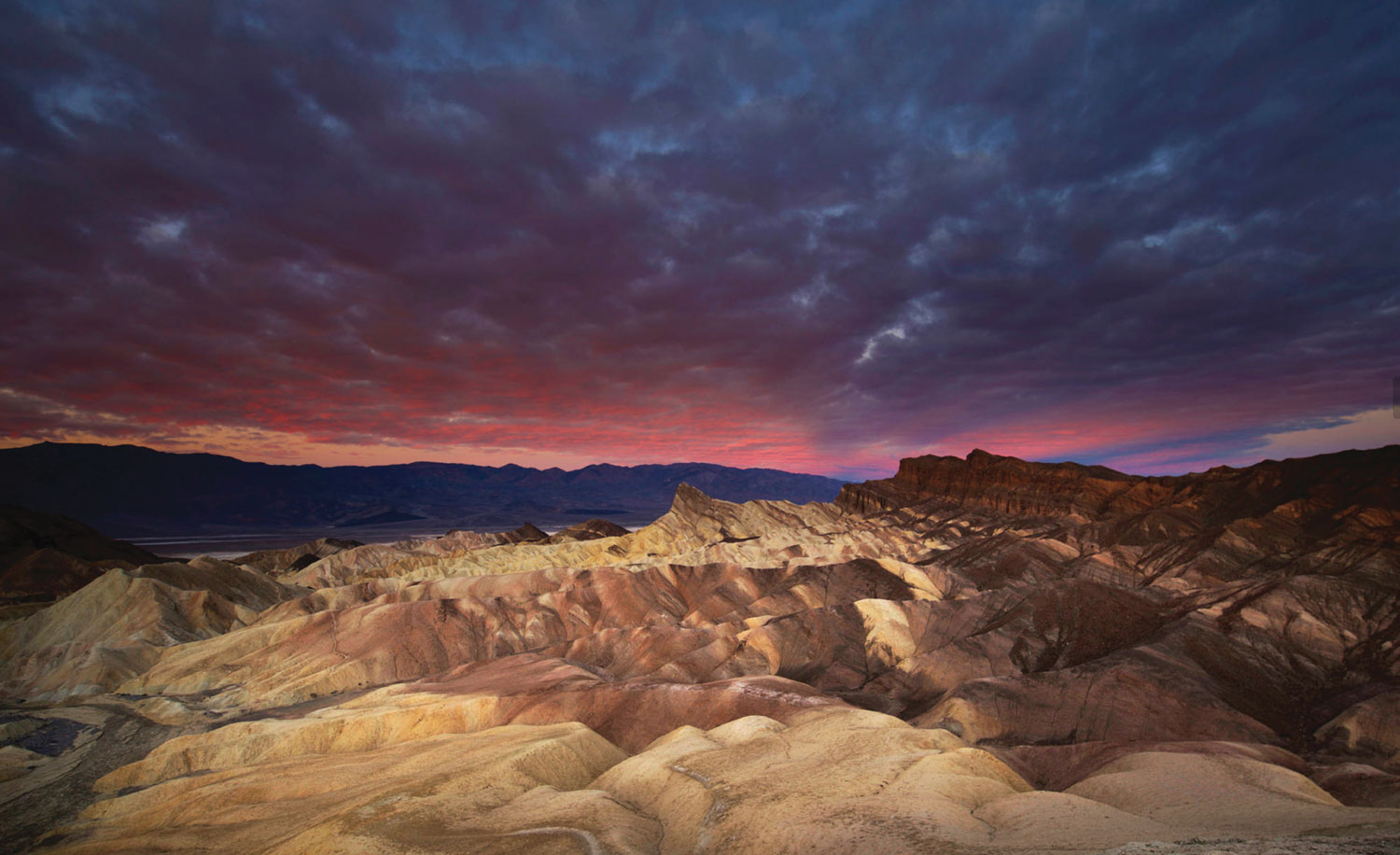 11 Sep Western Landmark: Luxury in the Depths of the Desert

During my first night at The Oasis at Death Valley, this city slicker was captivated by an eye-popping plethora of stars forming a hazy band of light across the black sky. This was outmatched the following morning when Mother Nature illuminated the panorama with a rare rainbow arc spanning miles across the desert floor. In the hottest (the second-highest temperature ever recorded was here at 134 degrees Fahrenheit), lowest (Badwater Basin sits at 282 feet below sea level), and driest (with an average of 2 inches of rain there per year) region of the Western Hemisphere, nature already seems to rule. But in this arid landscape, the meteorological occurrence was so unusual that Trey Matheu, the hotel’s general manager, suggested, “Today is the day you go buy a lottery ticket.” 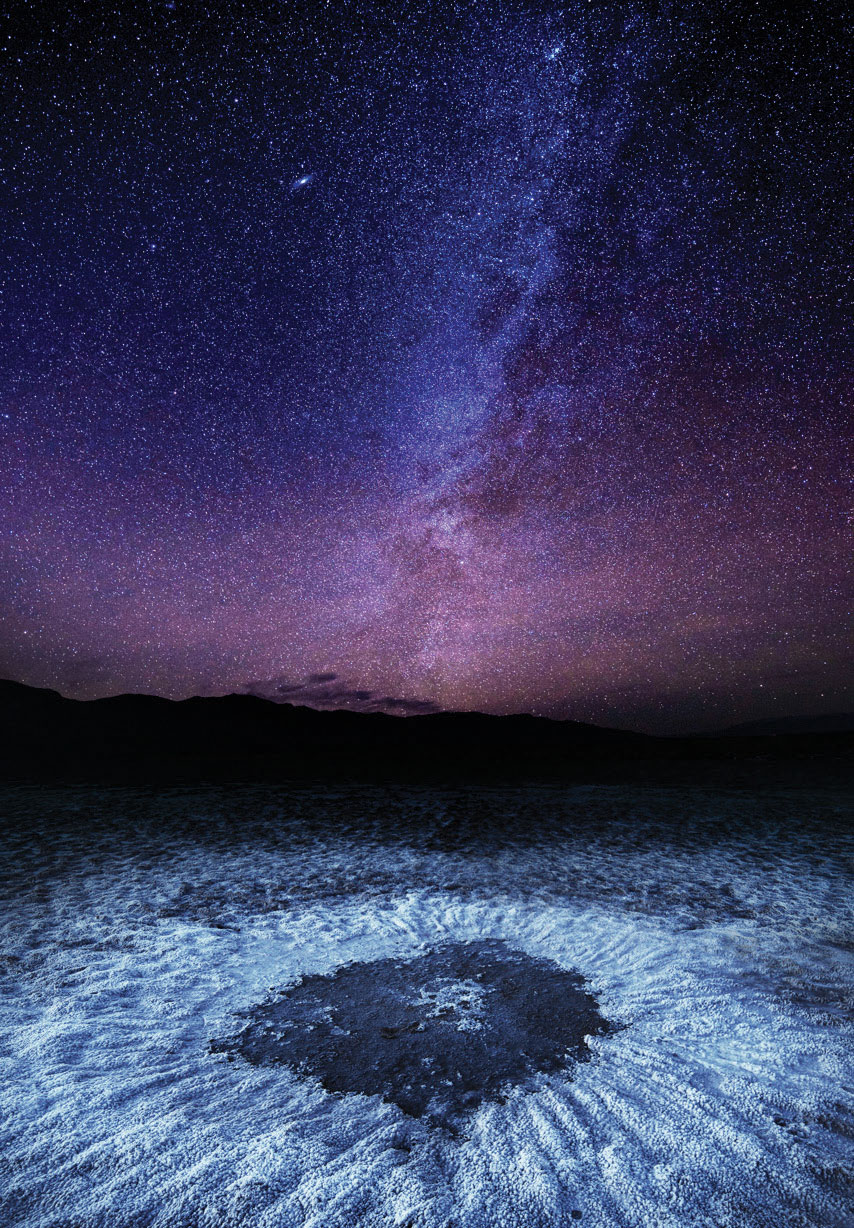 The brilliant Milky Way illuminates the salty landscape in the below-sea-level basin. Photos courtesy of The Oasis at Death Valley.

Contrary to its name, Death Valley is a thriving natural museum with more than 900 species of plants and desert wildlife unknown in other parts of the world. Situated along the California-Nevada border, 140 miles northwest of Las Vegas, the 3.3 million-acre national park boasts endless geological wonders that have been folded, twisted, uplifted, re-formed, and buried by cataclysmic forces over thousands of years, creating a landscape of raw beauty that attracted nearly 1.7 million visitors in 2018. 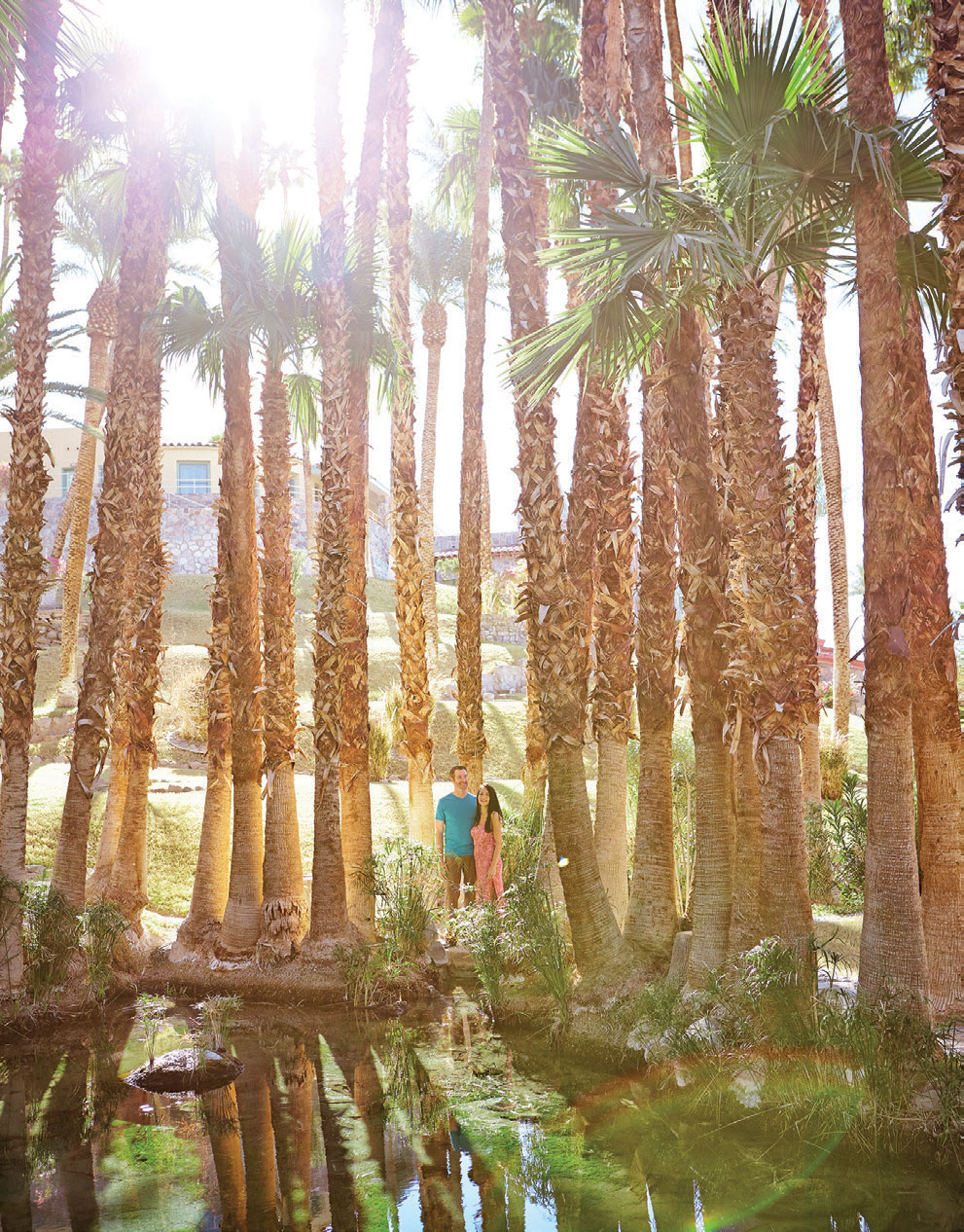 Despite the remote locale of America’s largest national park outside of Alaska, first-time guests to Death Valley will discover that the Oasis serves as one of the main activity hubs in the area. Guests can take comfort at either of the two distinct hotels that make up the property: the luxurious Inn at Death Valley and the family-friendly Ranch at Death Valley.

The roots of Death Valley’s prosperity started during the early 1900s when the Pacific Borax Company capitalized on mining the powdered mineral, considered “white gold.” The company eventually commissioned architect Albert C. Martin (who designed Los Angeles City Hall) to create a 12-unit hacienda-style hotel. With help from Spanish stonemason Steve Esteves, who created the Moorish-influenced stonework, and hand-made adobe bricks from Paiute and Shoshone laborers, the Furnace Creek Inn opened in 1927 and was reportedly built
for $30,000. 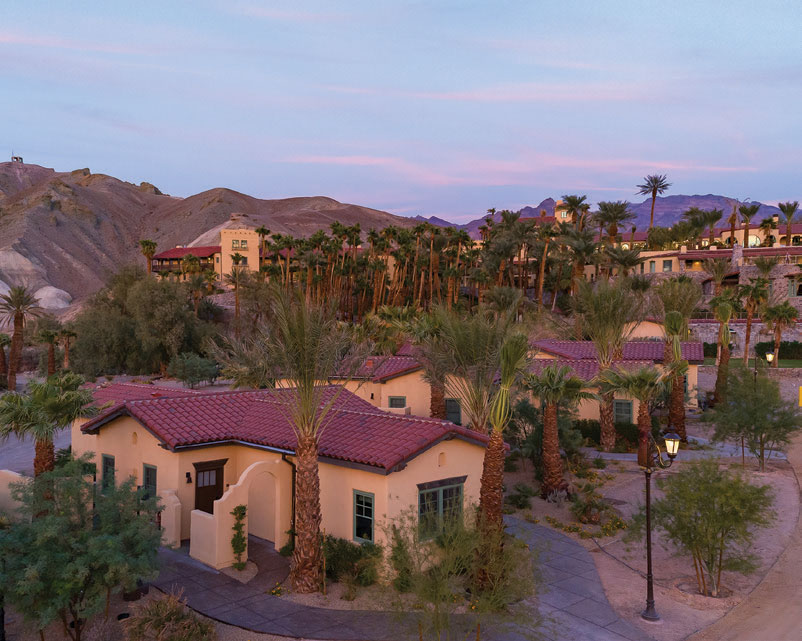 New casitas were added to the resort in 2018.

The inn was expanded to include 66 rooms by 1935 and remained that size until 2018, when billionaire Philip Anschutz, owner of Xanterra Travel Collection, invested roughly $100 million to transform the entire 338-acre desert compound and reopen it as The Oasis at Death Valley. In doing so, Anschutz awarded Colorado-based OZ Architecture the task of catapulting both hotel properties into the modern era while preserving the historic integrity, stylistic qualities, and Mission architecture. 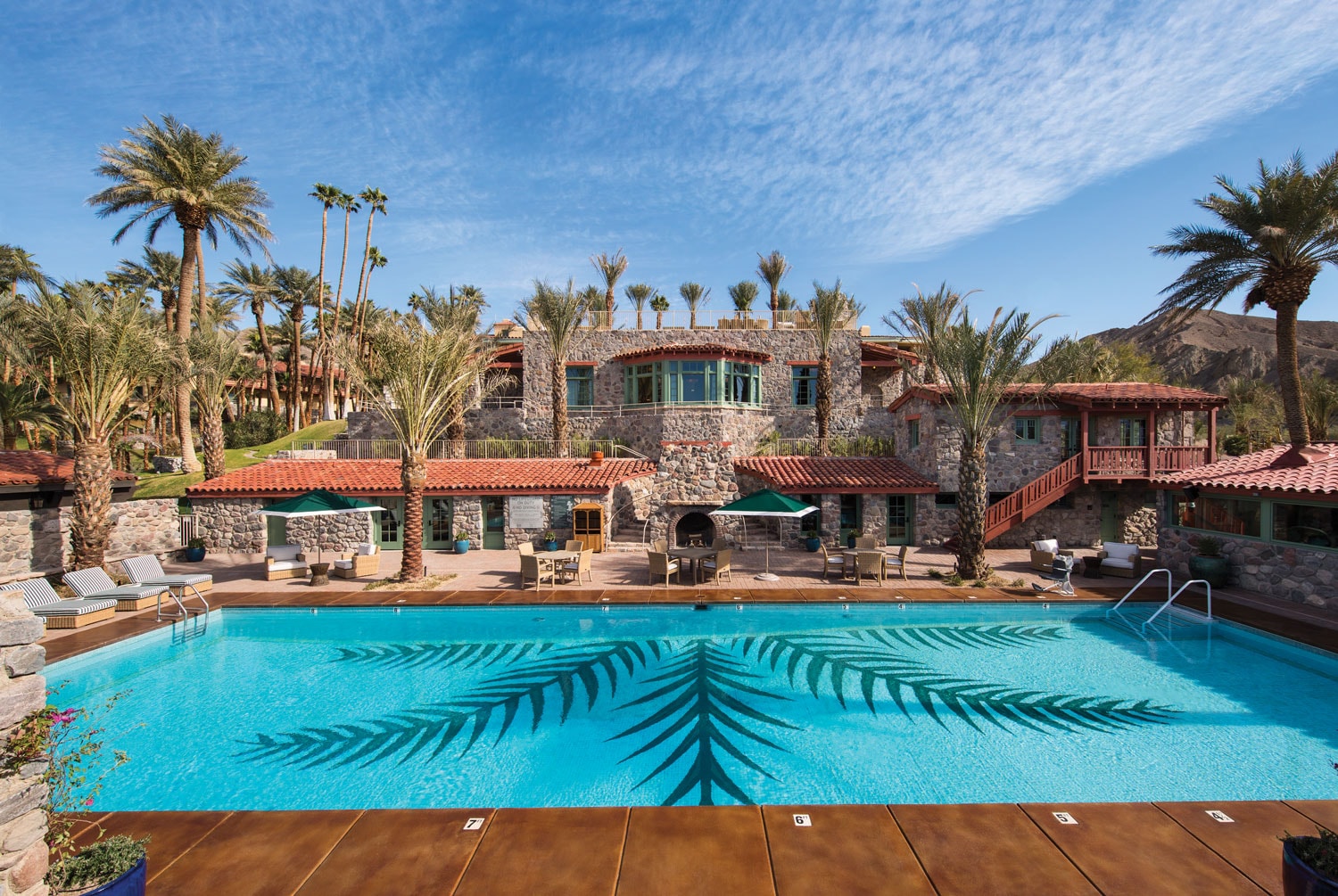 The historic spring-fed swimming pool is always 87 degrees. Photos courtesy of The Oasis at Death Valley

“The inn and the ranch’s architecture weren’t totally aligning,” said Rebecca Stone, a principal architect and hospitality practice leader at OZ Architecture. “The ranch seemed a bit temporary and Old Western, while the inn appeared more California Territorial and adobe looking.” Stone explains that the firm’s approach included low-water-use landscaping, for shading and cooling the property, and they avoided disturbing the environment by building as much as possible within the footprint of the old structures.

Along with refreshing the guest rooms, lobby, restaurant, and fitness room, and adding massage rooms next to the spring-fed pool, the most dramatic enhancement to the inn was building 22 private casitas that circle the gardens, each with its own golf cart for transportation. 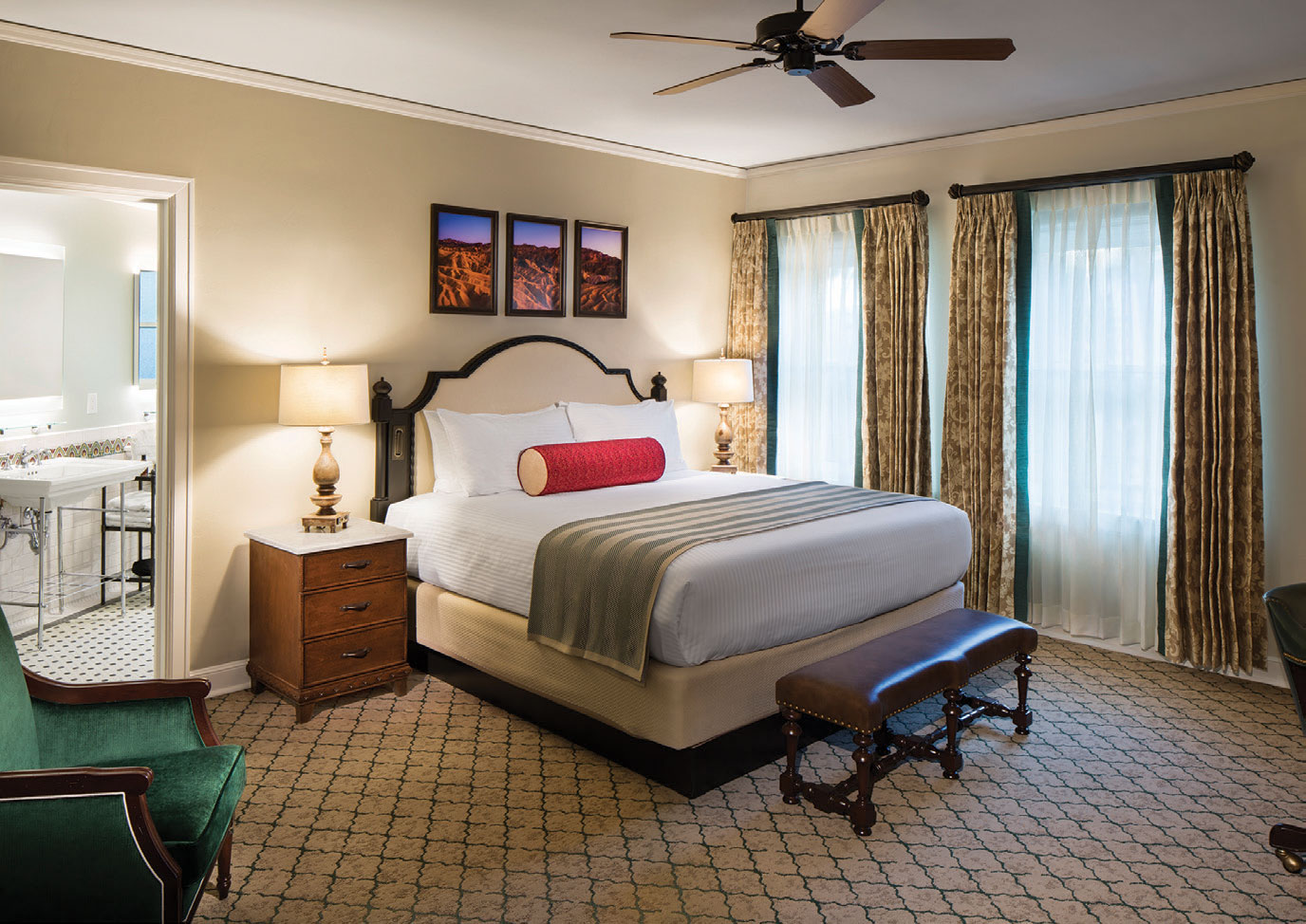 A standard room in one of the new casitas.

The inn’s neighboring 224-room ranch, adjacent to the world’s lowest elevation golf course and the Death Valley visitor center, also benefitted from a much-needed makeover. Today, it includes a Mission-style town square with an improved lobby, new restaurant, ice cream and coffee bar, general store, post office, and a saloon where you’ll feel like an extra in a Western movie. 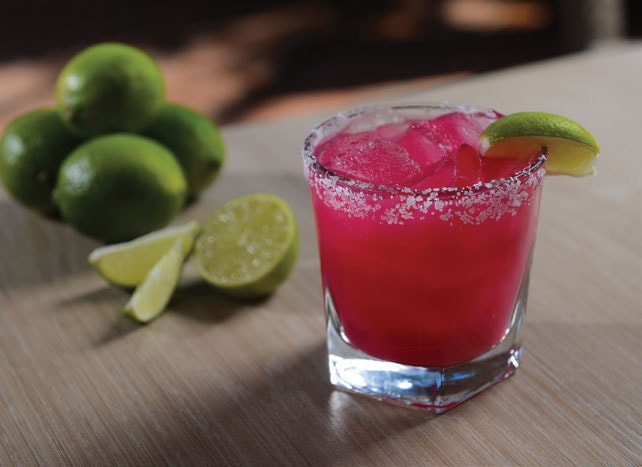 The Oasis offers a welcome reprieve from the mysteries of life contained in Death Valley’s arid atmosphere and isolated landscape. Both the ranch and inn offer great escapes for those looking to explore the surprises found in one of the hottest and driest places on Earth. 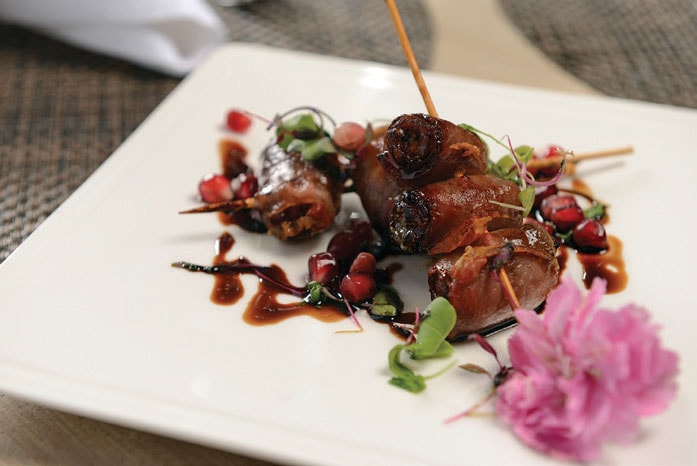 The resort serves such delicacies as blue cheese stuffed dates wrapped in prosciutto and finished with a pomegranate reduction. Photos courtesy of The Oasis at Death Valley.