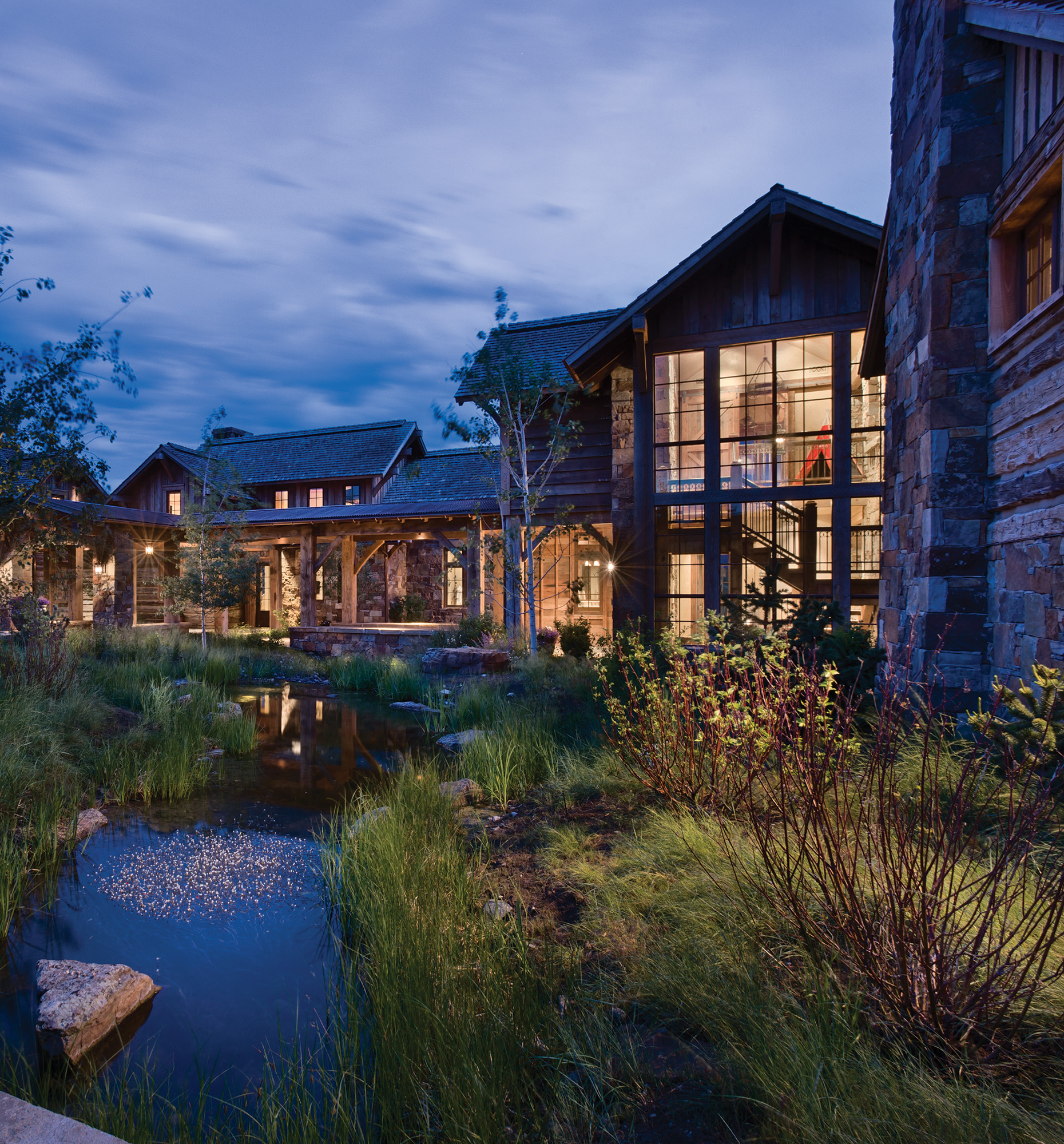 A number of water features were added to the homesite, including stocked ponds and a moatlike stream, adding another dimension to the already stellar views.

TODAY, IT'S NOT UNCOMMON FOR FAMILIES to live across the country — or the world for that matter — with gatherings that are few and far between. Russell and Glenda Gordy, of Houston, Texas, wanted to make sure this was not the case. They created a venue for regular family gatherings — a compound of sorts where, aside from hunting and fishing, being together was the main event.

The end result is the Double Arrow Ranch, a unique 44,000-acre property that stretches from the wildly scenic Crazy Mountains in southwest Montana to the banks of the blue-ribbon fishing waters of the Yellowstone River.

Russell, who made his fortune in the oil and gas business, is what you could call a land man. He spent much of his childhood on his grandparent’s 400-acre farm, where he developed a lifelong passion for open space. Throughout his career, as he sold off investments, he would turn around and buy more land, accumulating enough to make it onto The Land Report magazine’s list of the top 100 landowners. Always on the lookout for something unique, the oasis that now makes up the Double Arrow fit the bill.

“We wanted a big place, and it’s become harder to find large amounts of contiguous acreage where you also have privacy, rivers, mountains and beautiful country,” Russell says of the property, which includes a natural hot springs once popular with visitors traveling to Yellowstone in the late 1800s.

Russell pieced together seven ranches to create the Double Arrow, despite one rancher’s reservations. “A big piece of land was for sale, but it was bisected by a 5,000-acre ranch that cut it in half,” Russell recalls. “The owner said he would never sell, because he was born there, his family was buried there. I went and talked to him without the realtor, and I said, ‘You don’t have to leave.’ He became the ranch manager.”

After piecing the land together, it was another 10 years before the Gordys decided to build, around the time their grandkids — three to date — started to make an appearance. They found that Jerry Locati and partner Greg Dennee, of Bozeman-based Locati Architects, were a good fit. “They were low-key — professional but not pushy — and it was obvious they knew what they were doing,” Russell says.

Dennee and the project architect, Darin Hoekema, took the lead. Their first challenge was to choose the perfect homesite. “With that much acreage, we wanted it to be easily accessible,” Dennee says, explaining that they also had to consider a location that could accommodate a helicopter pad, as Russell frequently flies his own. “The spot we picked had ideal mountain views, but it was very dry, so we brought in the water and that really brought everything together.”

The firm worked with Bozeman-based Pond and Stream Consulting, who consolidated existing sources of water to create the new environment. “We wanted the water feature to be architecturally integrated, so Greg developed the concept, and we fine-tuned the design to provide a trout fishery and spawning habitat,” says Alex Fox, co-owner of Pond and Stream. “We created a small ecosystem, almost identical to a natural system, and when you add open water and trout to an environment like that, you draw in a lot of wildlife.” The water that now surrounds the property, almost in a moatlike fashion, adds a layer of serenity to an already beautiful setting.

During the design phase, Glenda helped create the overall vision for the ranch, from the architecture to the interiors. “I can’t picture what anything is going to look like until it’s finished,” Russell says. “But my wife is amazing at that stuff; she worked so well with the architects and interior designers.” The Gordys had a few desires: They wanted enough room to support visiting friends and family, a private home for each of their two sons and their growing families, and also a place that felt intimate when it was just Russell and Glenda on site.

“The challenge was to make the spaces of scale to accommodate both scenarios,” Dennee says. “We created an area within the kitchen with a casual dining and living room, and then they can use the larger dining room and gathering areas when more people are around.”

When it came time to build the 12,000-square-foot home, Locati collaborated with the experienced craftsmen at Schlauch Bottcher Construction. Amanda Heys, Locati’s lead interior designer, worked closely with Glenda to plan the interiors.

“Our vision for the home was very similar to theirs, which was a rustic, traditional elegance,” Heys says. “Fitting with Montana, we used a mixture of rustic stone, timbers and flooring, combined with elegant fixtures and fabrics.” Large stone walls and timbers are adorned with hand-forged iron light fixtures for an almost medieval look that’s offset by the natural light from expansive windows and light-colored fabrics. Casual dark leather seating is balanced by refined finishes, such as chenille, silk and detailed patterns in the upholstery, some decorated with tassels and trim.

“It’s very elegant, but it’s also home,” Russell says of the outcome. “There are some homes that are so immaculate that you’re afraid to touch anything, but this is a comfortable place to live in.”

The home’s design includes spaces for the Gordys to pursue their hobbies. A contemporary, well-equipped workout room, where Glenda likes to spend time, features large glass doors that open to the water and expansive landscape. For Russell, there’s a sitting area outfitted with a custom display for his collection of antique Western guns. With a taxidermied mountain lion perched above an antique safe and an adjoining bar, you can easily picture Russell and his friends sitting around a roaring fire, sipping Scotch and regaling each other with hunting tales. A game room sits off the great room, with everything from darts and shuffleboard to pool and foosball, each game table blending elegantly into the surrounding furnishings.

Although the Gordys’ sons and their families have private homes connected to the main house by breezeways, the Gordys also built a bunk room. “We really enjoy our grandchildren,” Russell explains. “We want to be able to bring them even if their parents can’t come, so we built a bedroom near the bunk room for us, too.”

Russell spends most of his time outdoors, either hunting and fishing or relaxing in one of the many outdoor living spaces where native plants and grasses, designed and maintained by Bozeman-based Mayville Landscaping, blend into the mountain-river scenery.

Since the home was finished in 2014, the Gordys’ plan of luring family has seemingly worked. Glenda’s entire family spent the past Fourth of July on the ranch, and Russell has hosted a number of fishing trips with his friends. The family even spent a recent Thanksgiving there, which included a Christmas tree hunt with the grandkids.

“This is something to do as a family, because families drift apart if someone doesn’t keep them together,” Russell says. “I’m hoping they keep this in ours for a long time.” 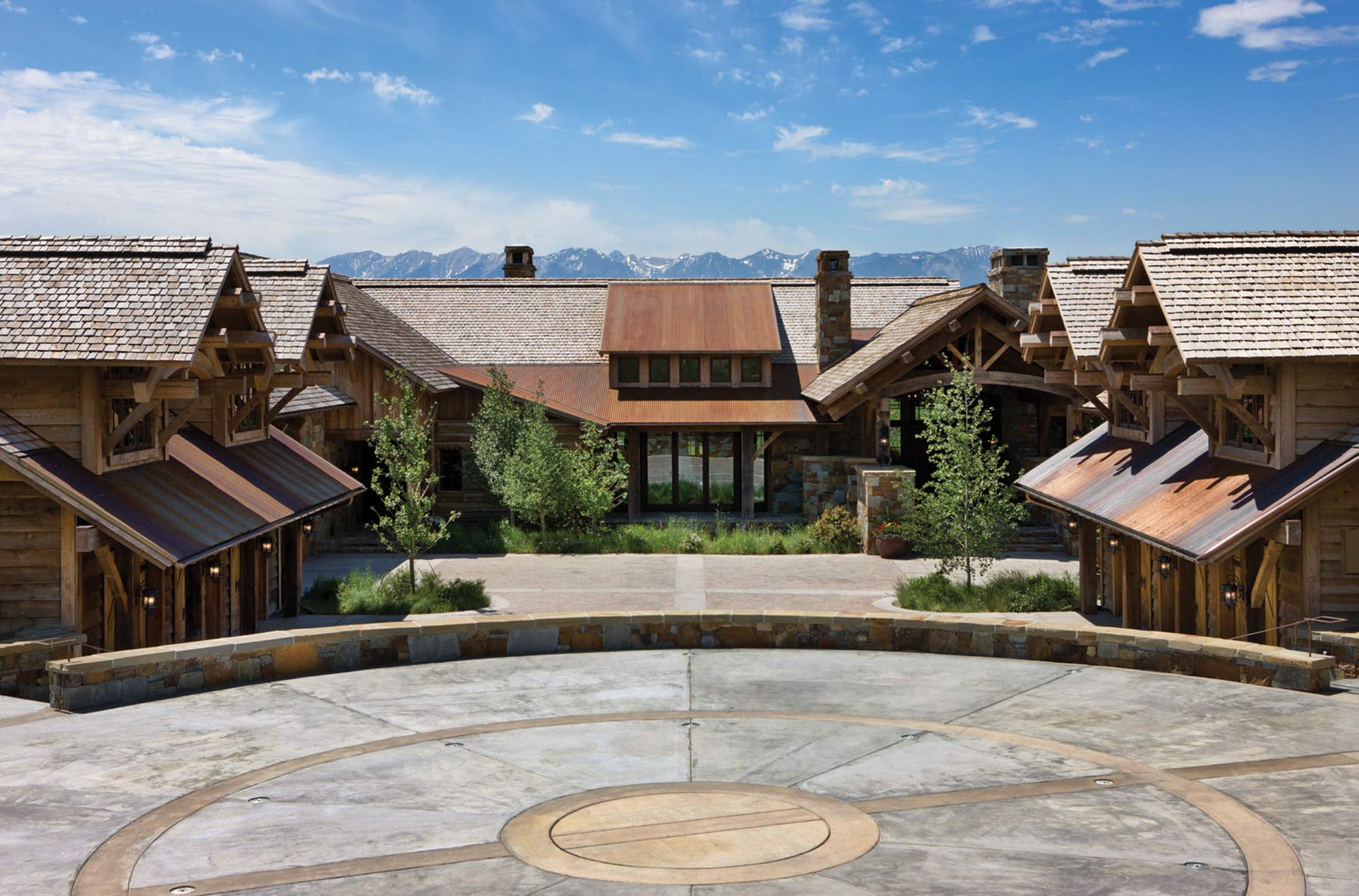 Because homeowner Russell Gordy often pilots his own helicopter, a heli-pad was designed inside the compound walls to protect the landing site from the frequent wind. 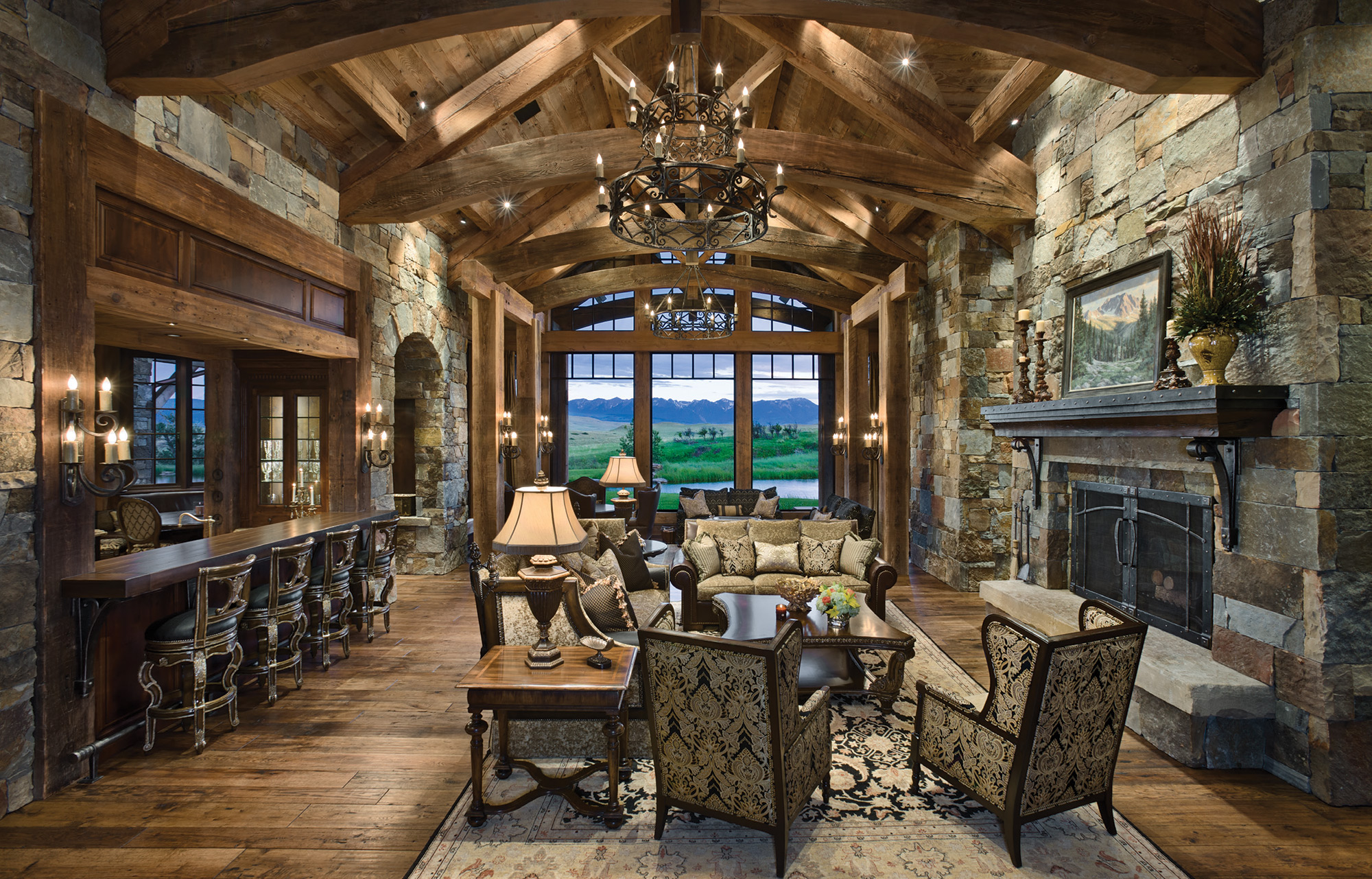 A formal great room looks to the mountains and provides a number of seating areas to accommodate frequent guests. 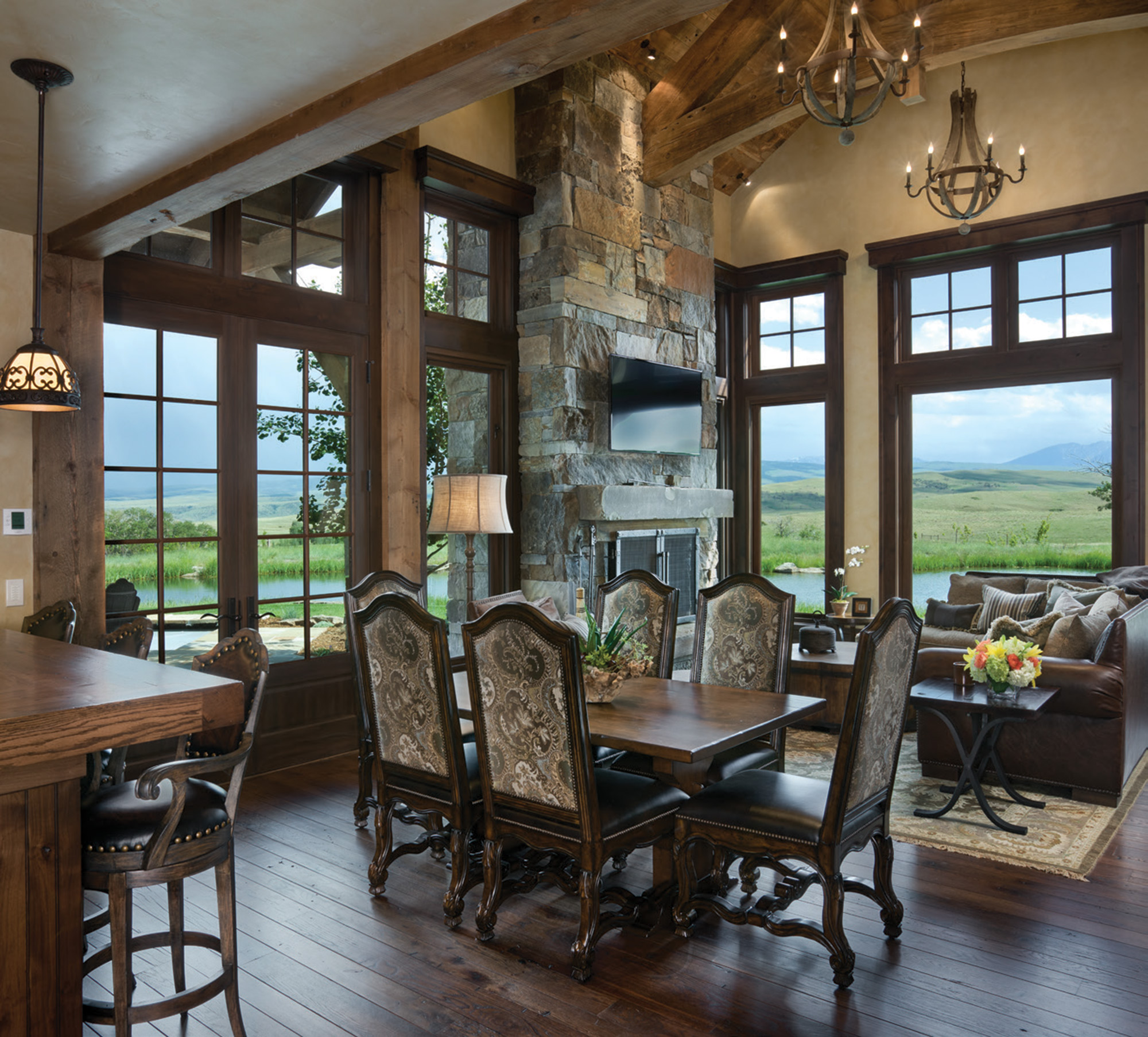 A casual dining and living room were created off the kitchen, offering an intimate space for when the Gordys are visiting on their own. 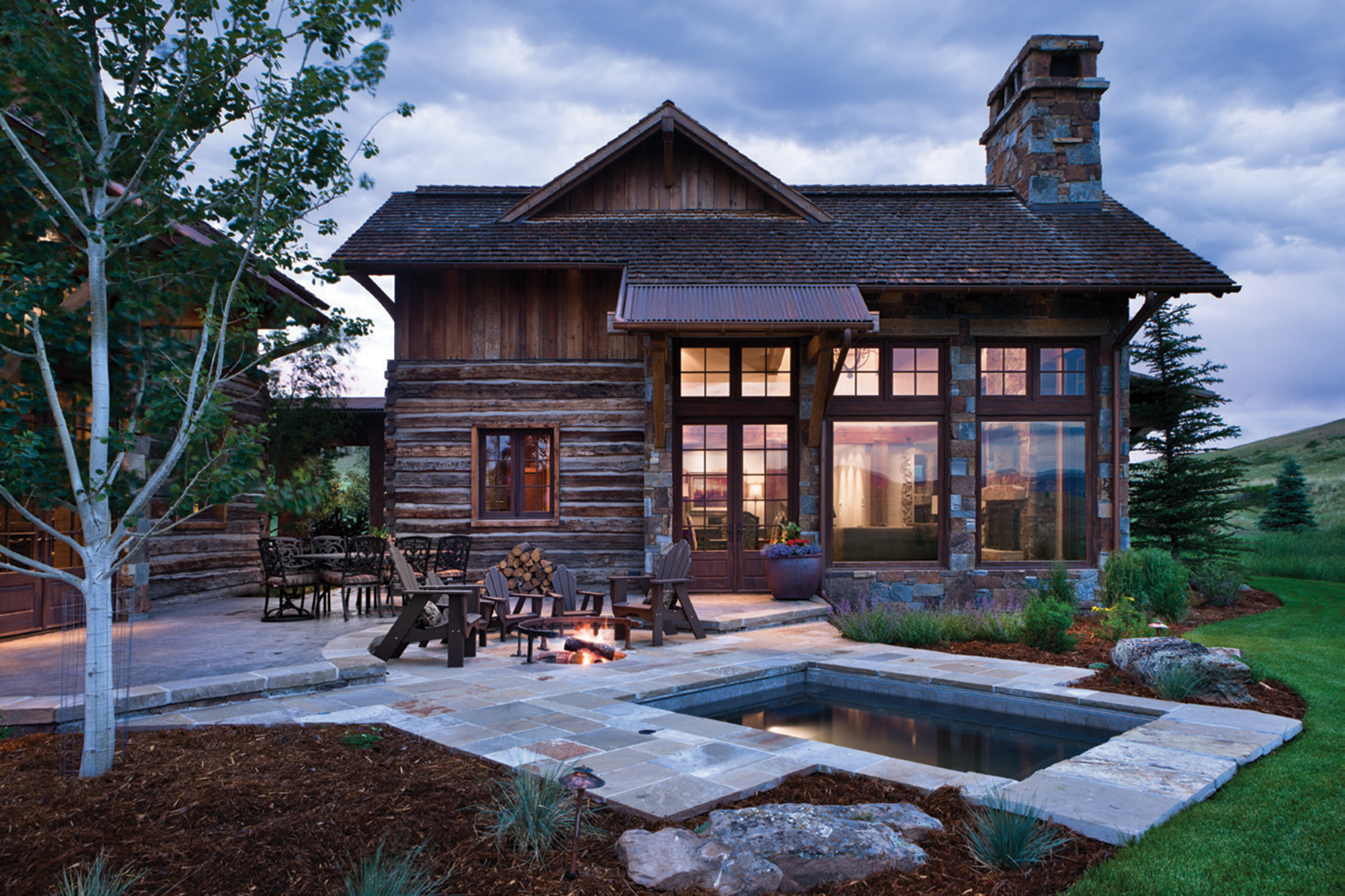 Adjoining the main home by breezeway are two additional homes, one for each of the Gordys’ sons and their families. 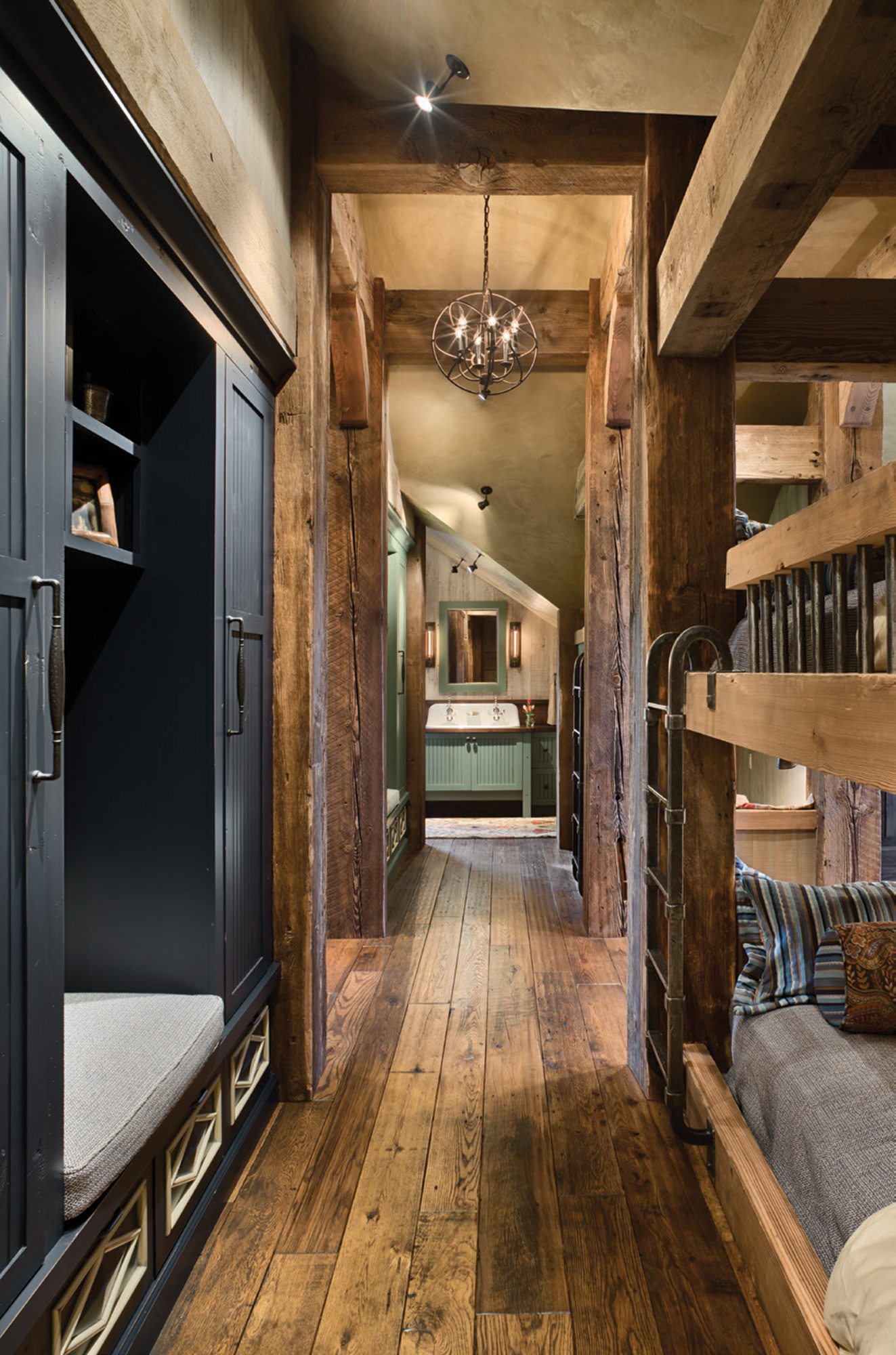 A bunk room was designed for frequent visits from the Gordys’ grandkids. 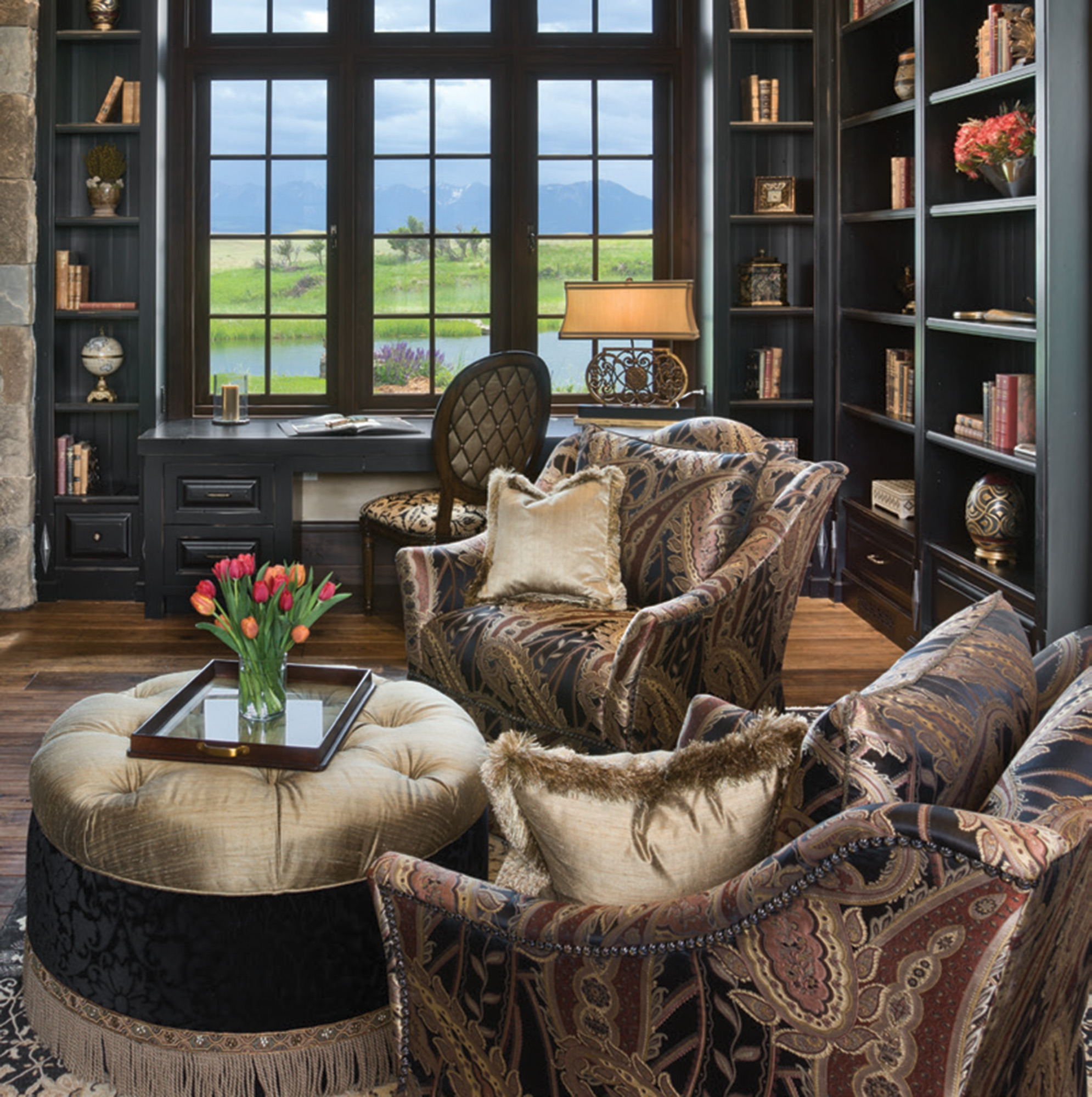 A well-adorned office is a quiet space with inspiring views. 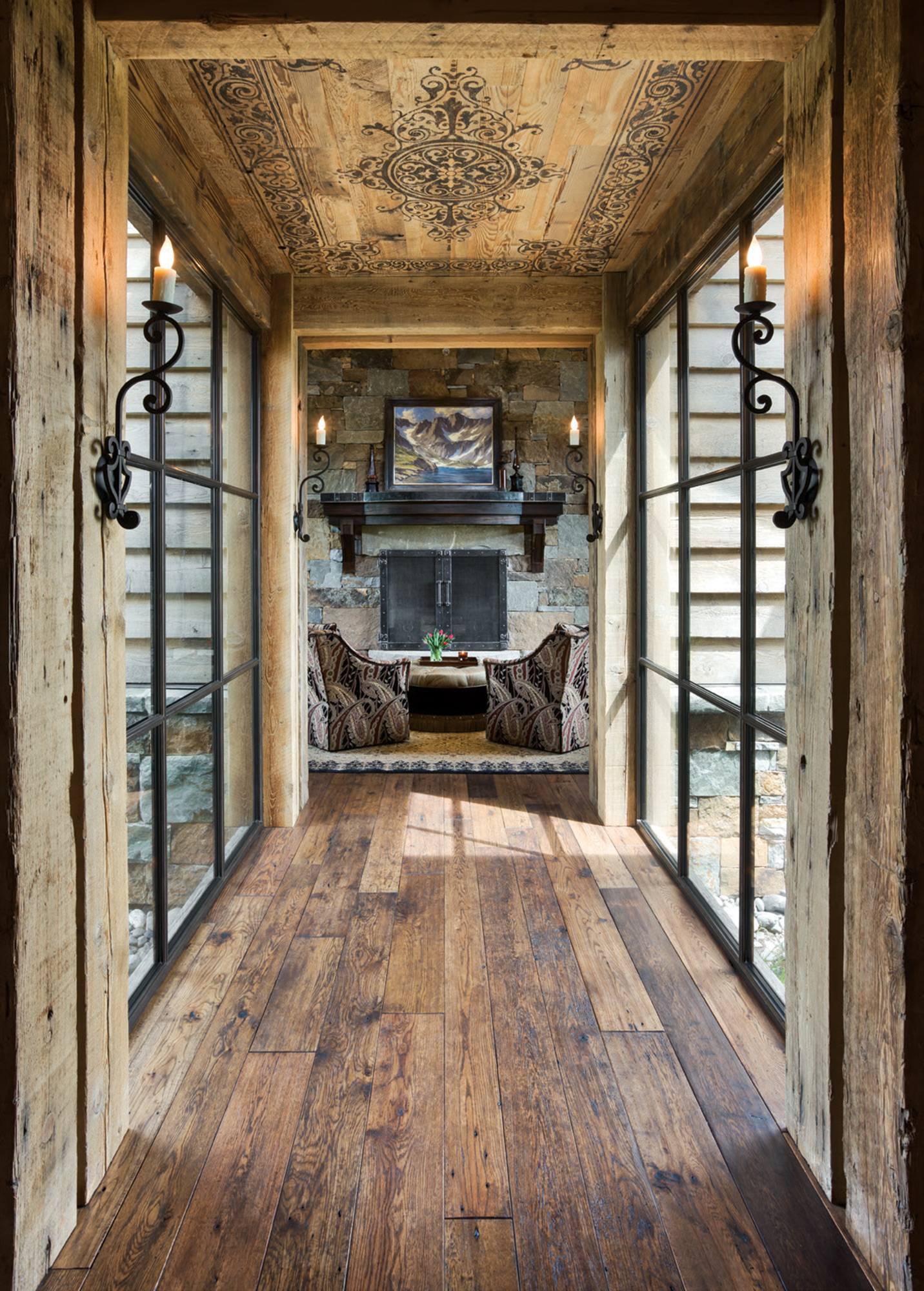 Seating areas located throughout the home create a comfortable setting for quiet conversations. 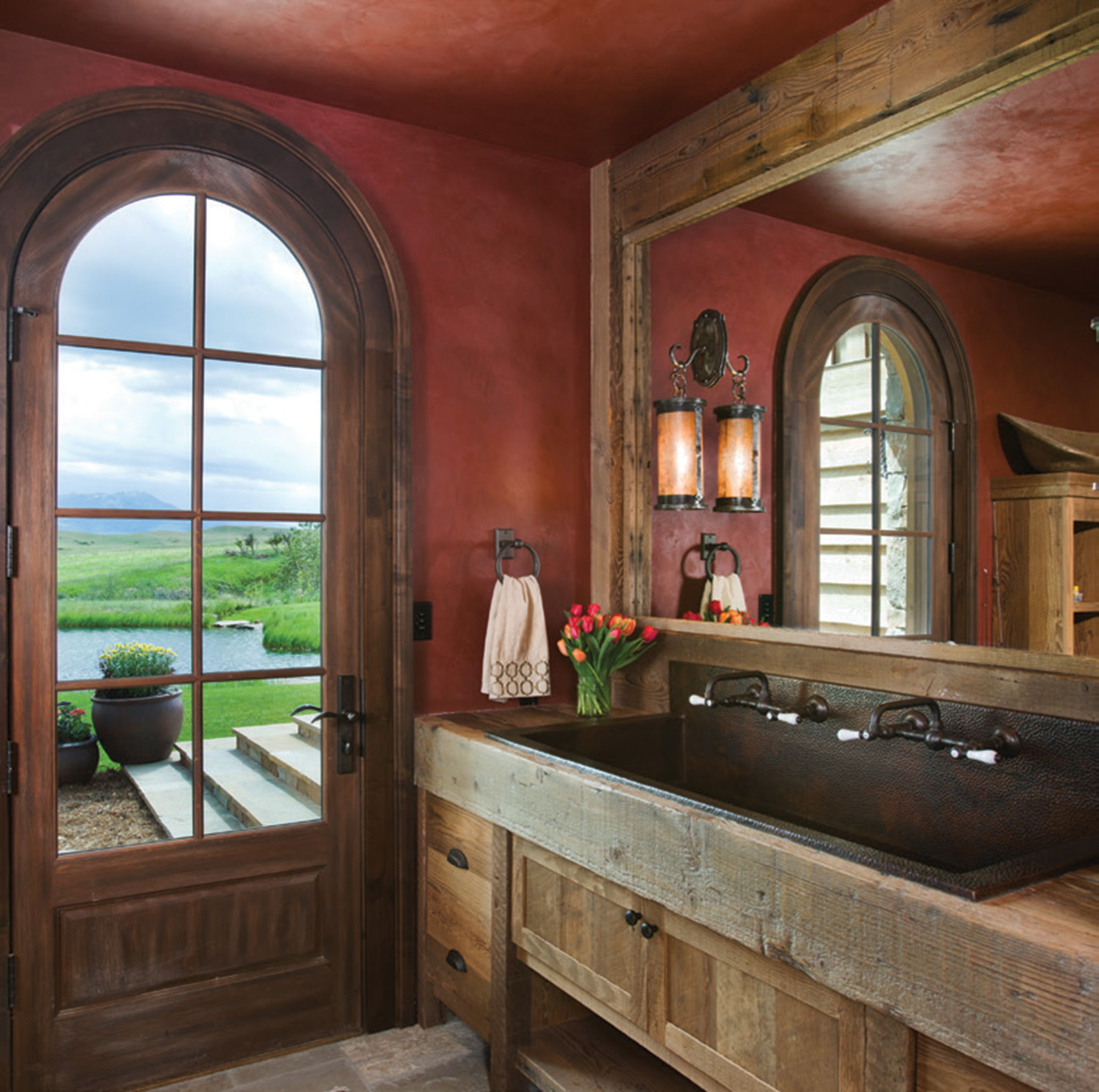 The master bath leads to a hot tub overlooking the water and mountain views. 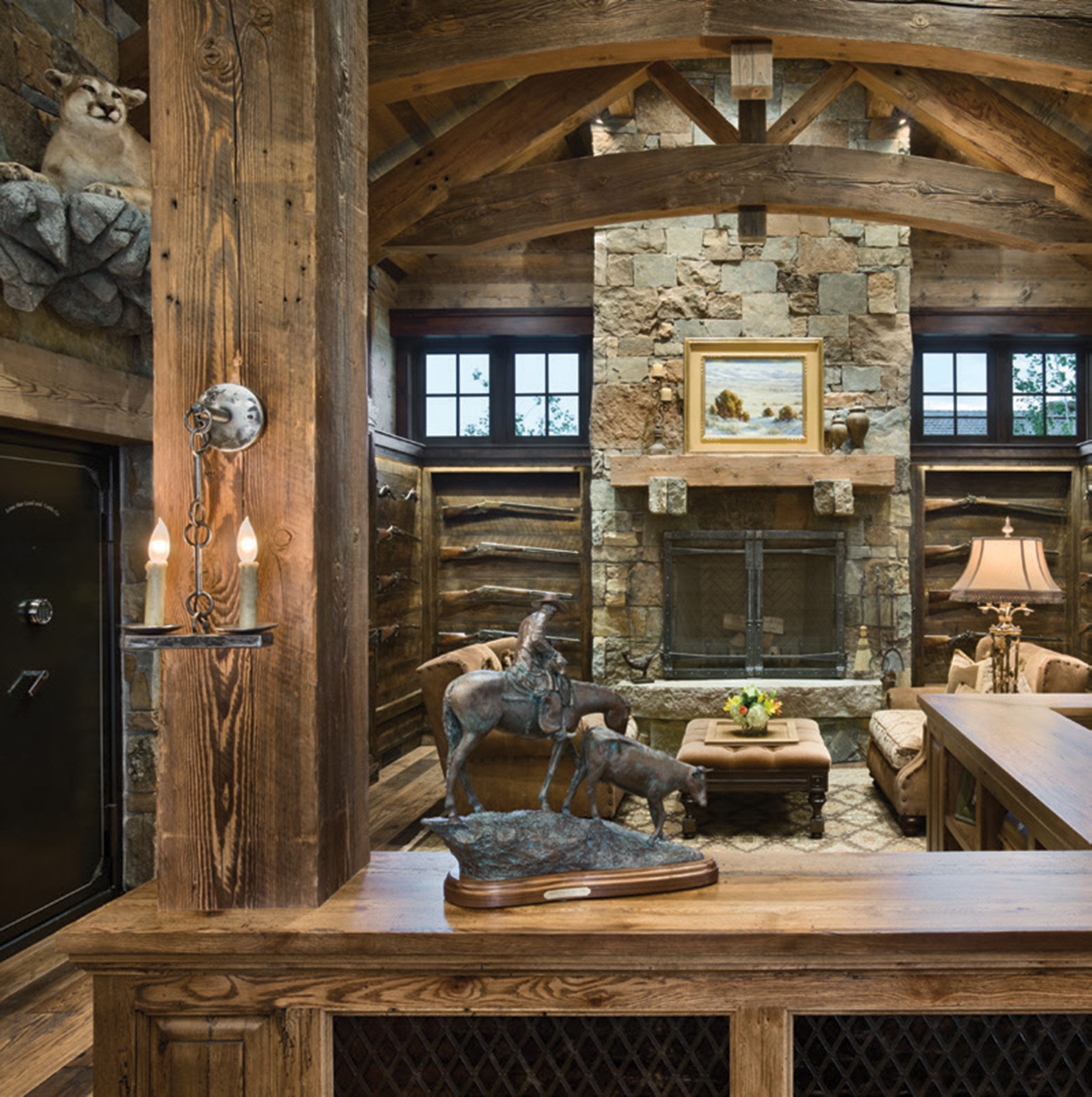 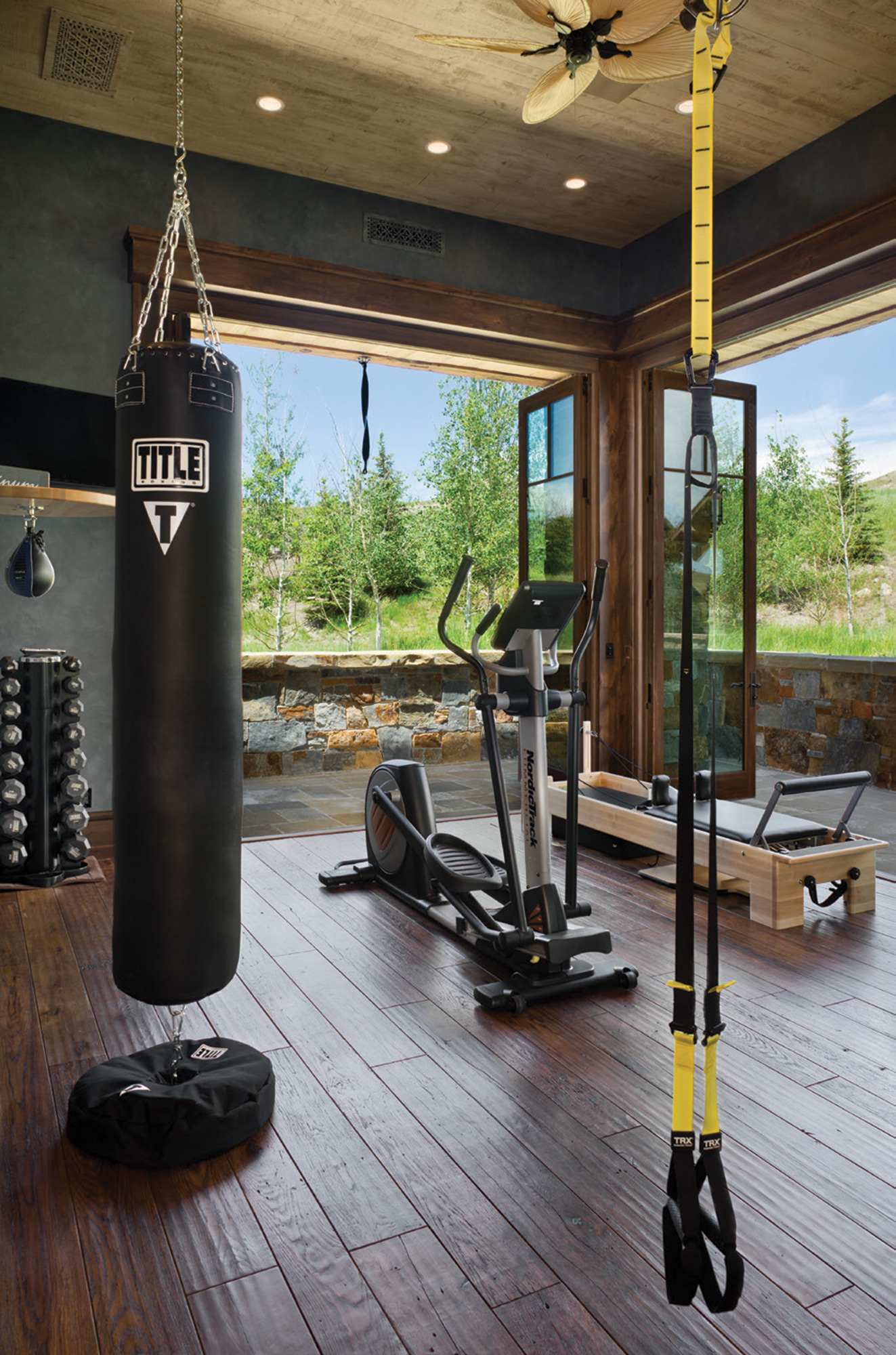 The workout room opens to the great outdoors, offering light and fresh air. 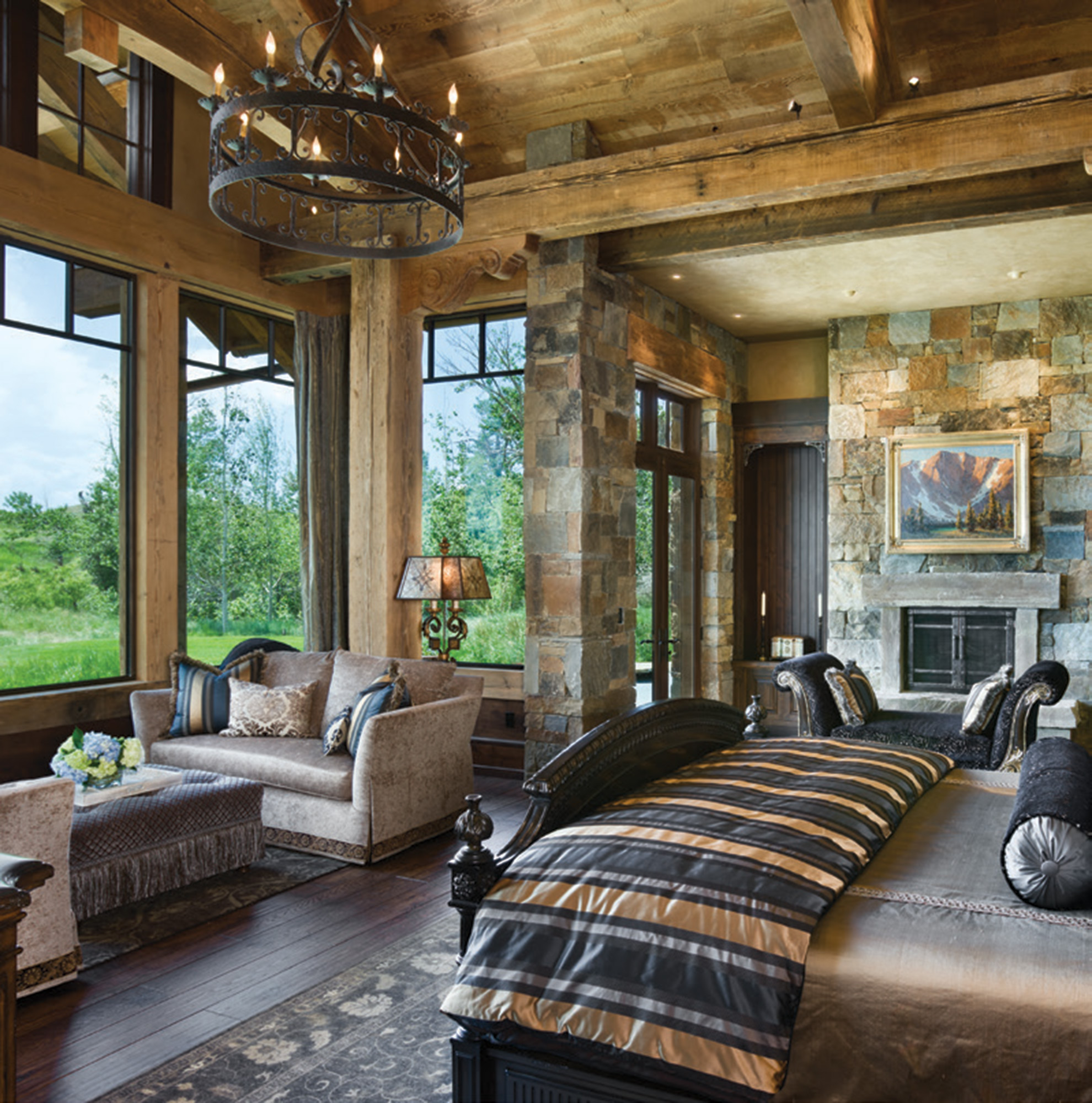 The décor in the master suite is aligned with the rest of the home — a blend of rustic stone, timber and iron fixtures. 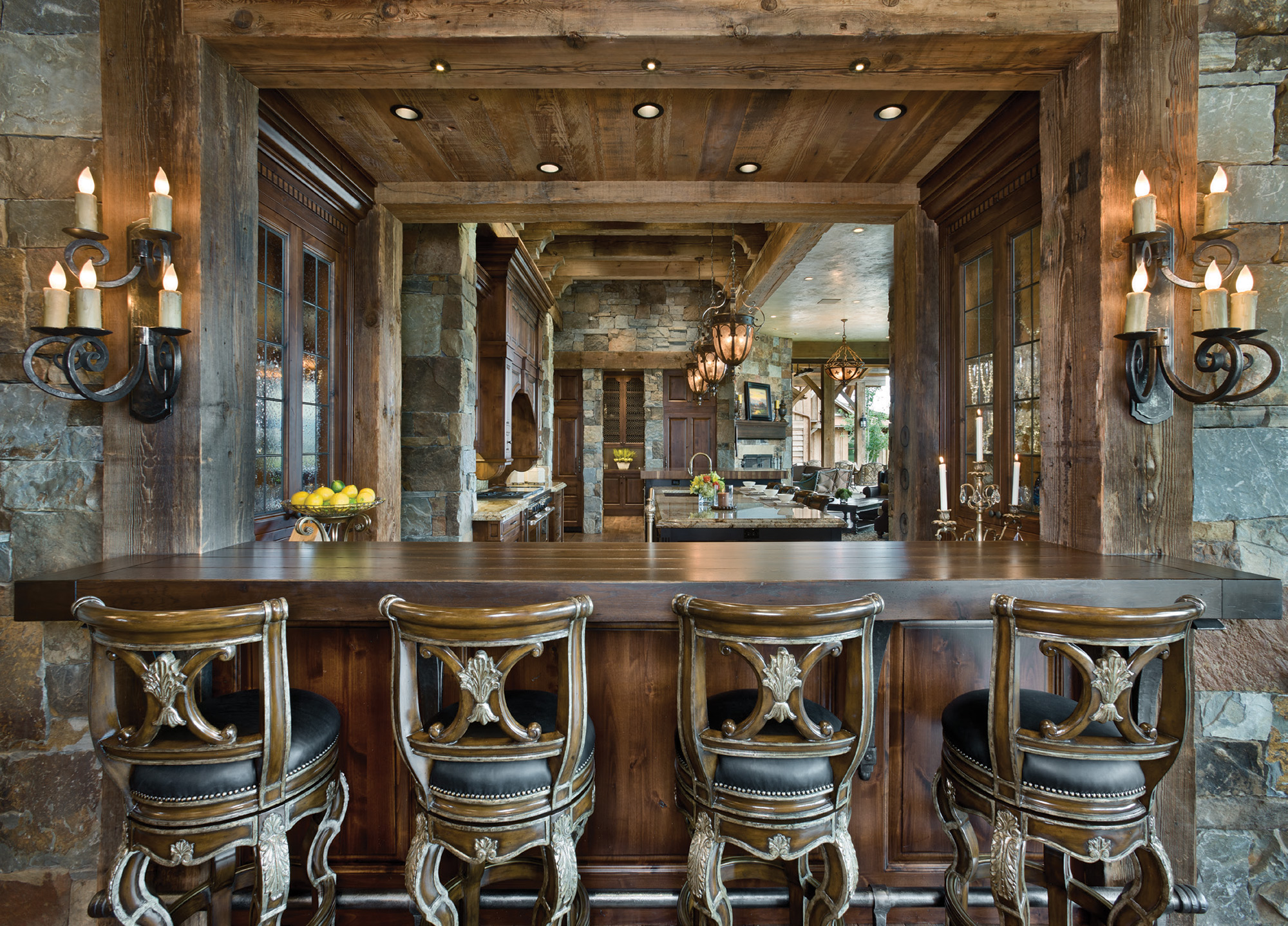 The décor throughout the large, well-equipped kitchen features the same regal designs as the great room, including chairs with detailed craftsmanship and customized iron light fixtures.