10 Mar A Painter of Place

AS WITH MANY ARTISTS FROM THE WEST, Josh Elliott is obsessed with the landscape. It’s difficult not to be when you live in a place such as Montana, a place where you are surrounded by the best nature has to offer.

But also like many artists from the West, Elliott doesn’t consider himself a “Western artist.” “I’m an artist who just happens to live in the West,” he says, adding that his goal has always been “to transcend region by inviting people into my world.”

It takes a special talent to be able to translate the vast beauty that is the West onto a canvas that is but a few feet wide, a few feet high. And Elliott has quickly risen in the ranks of the best artists in Montana, recently being honored by the Eiteljorg Museum of American Indians and Western Art with the prestigious Purchase Award during its annual exhibition, Quest for the West, in 2016. His painting, White as Snow, also won the 2-D Award last year during the Buffalo Bill Center’s Show and Sale in Cody, Wyoming.

Elliott comes by this talent naturally, with his father, Steve, also a highly regarded Western artist. Elliott was born in Great Falls, Montana, but grew up in various places, including Billings, Montana, and Sandpoint, Idaho. “Both of my parents were very encouraging when it came to the arts, but my dad actually gave up practicing medicine to pursue his painting career, so I had a pretty strong role model there,” he says.

In college, Elliott studied art but was leaning toward a degree in film when his father invited him to study with him in Colorado. He was already selling a few paintings, so he decided to take his father up on the offer, and it ended up kick-starting his career. He never did finish his degree, but that certainly hasn’t hampered his progress.

The true measure of a fine Western artist is when his influence extends beyond the small circle of his home state, and at the age of 46, Elliott has already managed to exhibit his work as far away as Georgia, Oregon and New York. He’s represented by the Medicine Man Gallery, with locations in Santa Fe, New Mexico, and Tucson, Arizona; A.L. Swanson Gallery in Helena, Montana; Claggett/Rey Gallery in Vail, Colorado; and Simpson Gallagher Gallery in Cody, Wyoming.

So these are the facts about Josh Elliott the painter. But what the facts don’t tell us is what an artist does that is different — the ability to transform the scene outside his window into something that moves people. In Elliott’s case, the answer seems to lie in his objective with every piece of art, which is “to tell the story of this place.”

As is often true with the best craftsmen, Elliott captures the story of a place through the use of light. In a piece called Desert Sunset, Elliott paints that particular color of the sky just before the sun sets, when the landscape is slightly blurred and every color is just a bit muted. And there may be no better example of how Elliott imparts a moment than with the painting that won the Eiteljorg’s Purchase Award. Calving Season portrays a man walking outside a barn in the middle of the night. The ground is half-covered with snow, so it tells us this man calves in the winter, which ranchers do when they want their calves to be bigger during shipping season. So we already know two things about this man: he makes hard choices because he knows they will pay off, and he’s willing to spend the hours when most people are sleeping checking on his cattle to make sure they’re okay.

Elliott says the idea for this painting came when he went hunting with some friends and stopped at a ranch to ask permission to hunt on their land. They were in the middle of calving, and the picture of this man walking along in front of the barn stuck with him. He decided to change the scene into a night scene “because I know those guys work around the clock during calving season, so I wanted to provide a snapshot of that life.”

Johanna Blume is the associate curator of Western art at the Eiteljorg, and she describes herself as “a very vocal advocate for Josh’s work.” Blume grew up in Rapid City, South Dakota, so she has a close relationship to Elliott’s art that reminds her of her own experiences. “I feel as if I’m walking right into the world where I grew up,” she says. “I love the fact that none of his paintings ever seem to be overworked or overthought. He has a wonderful mastery of oil paint as a medium.”

Elliott has been married for quite some time, and he has two young daughters, ages 10 and 12, so he has come to rely more on photographs to capture the scenes he wants to paint. “I try to go on two painting trips every year, but I used to spend a lot more time in the field. Domestic life has changed that, but one thing I like about painting from photographs is the way a painting will sometimes change through the process. I’ll decide on a slightly different color for the sky, and I end up with something that’s different from the photograph. That doesn’t make it any less authentic. It’s just that the scene transforms.”

Ultimately, there are four guidelines Elliott tries to keep in mind when he’s deciding what to paint next. He wants the subject to fit into one or more of these four categories: poetic, artistic, iconic and epic. “I consider an iconic painting to be something like the Going-to-the-Sun Road in Glacier Park, something that captures an image that is familiar to the audience. Epic is more something that may be standard viewing, but you try to bring it to a new level, like a sunset in the Southeast, something like that. For poetic, I occasionally like to try something that might not appeal to everyone, something that only a few people might appreciate or understand. Artistic is a little more obvious.”

Ah yes, the understatement. Maybe it’s obvious to Elliott. But, of course, that’s what makes him a great artist. 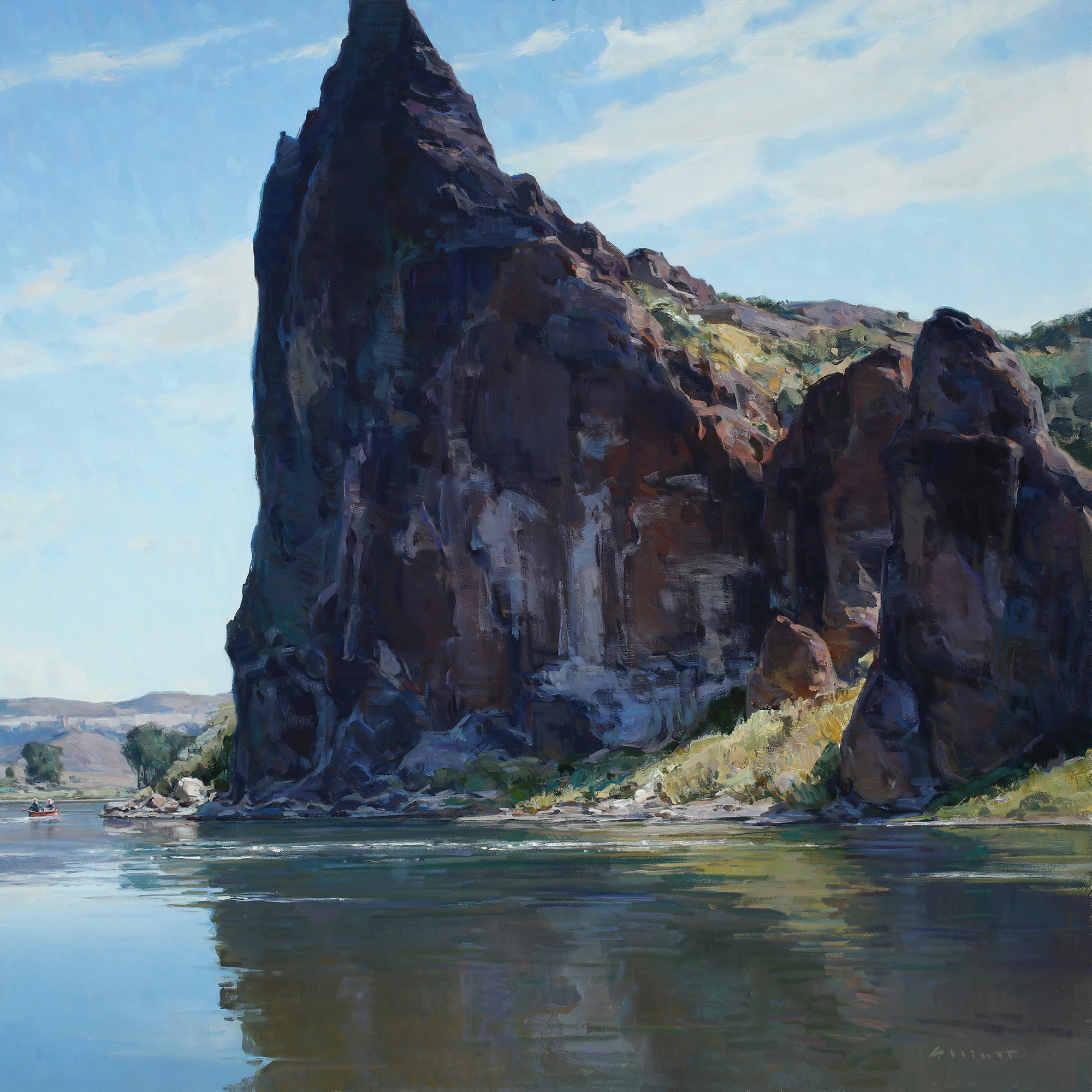 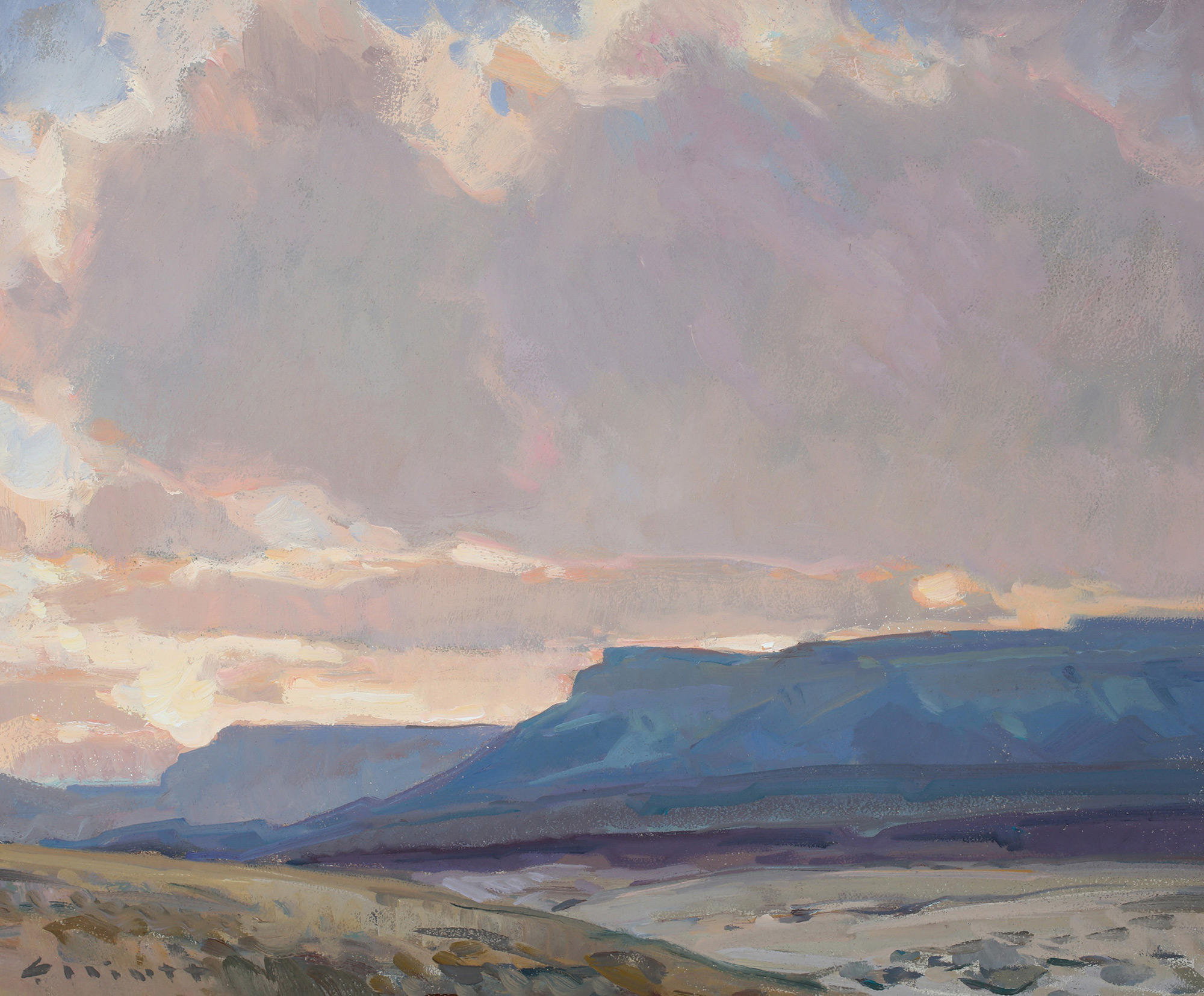 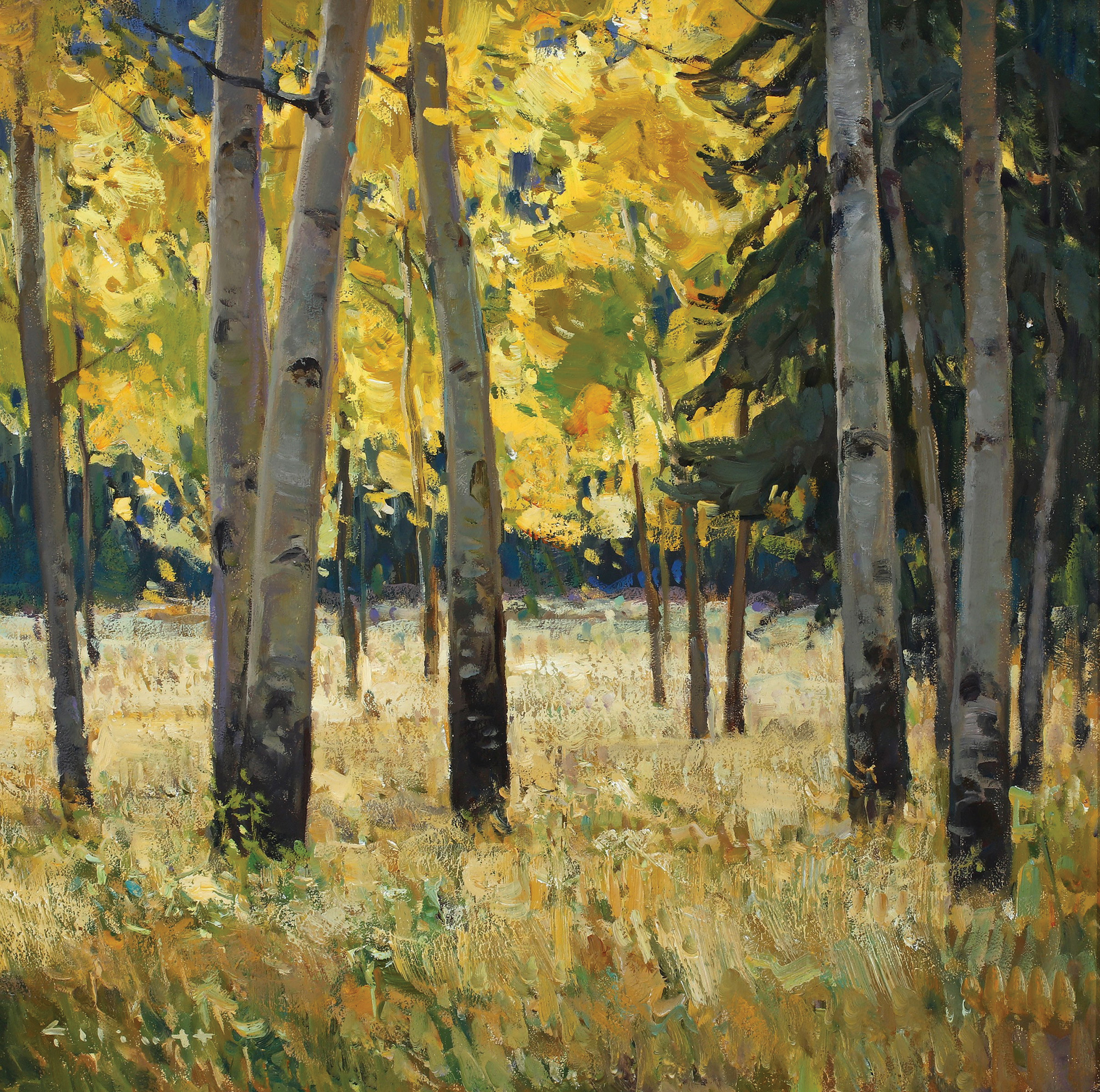 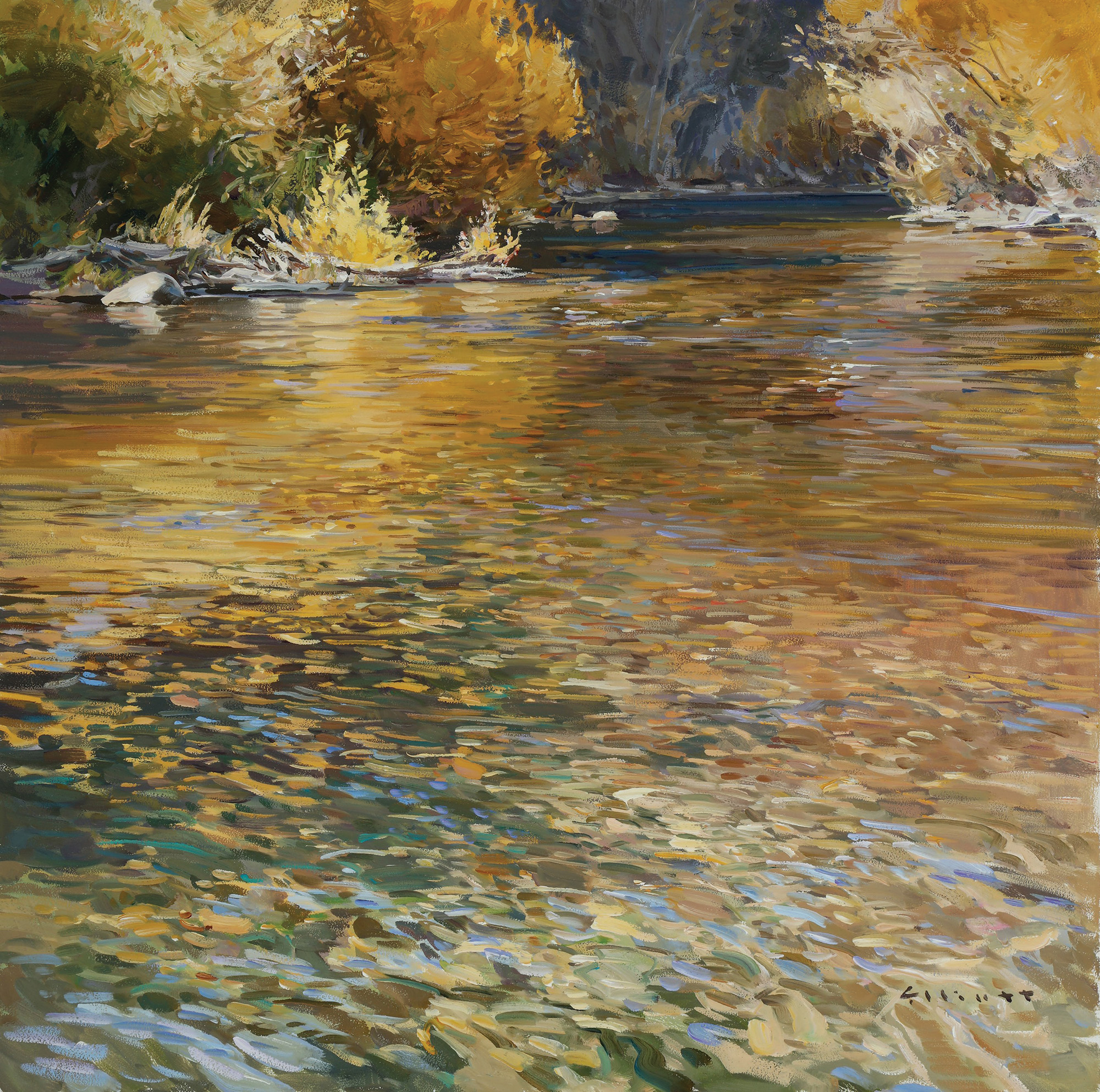 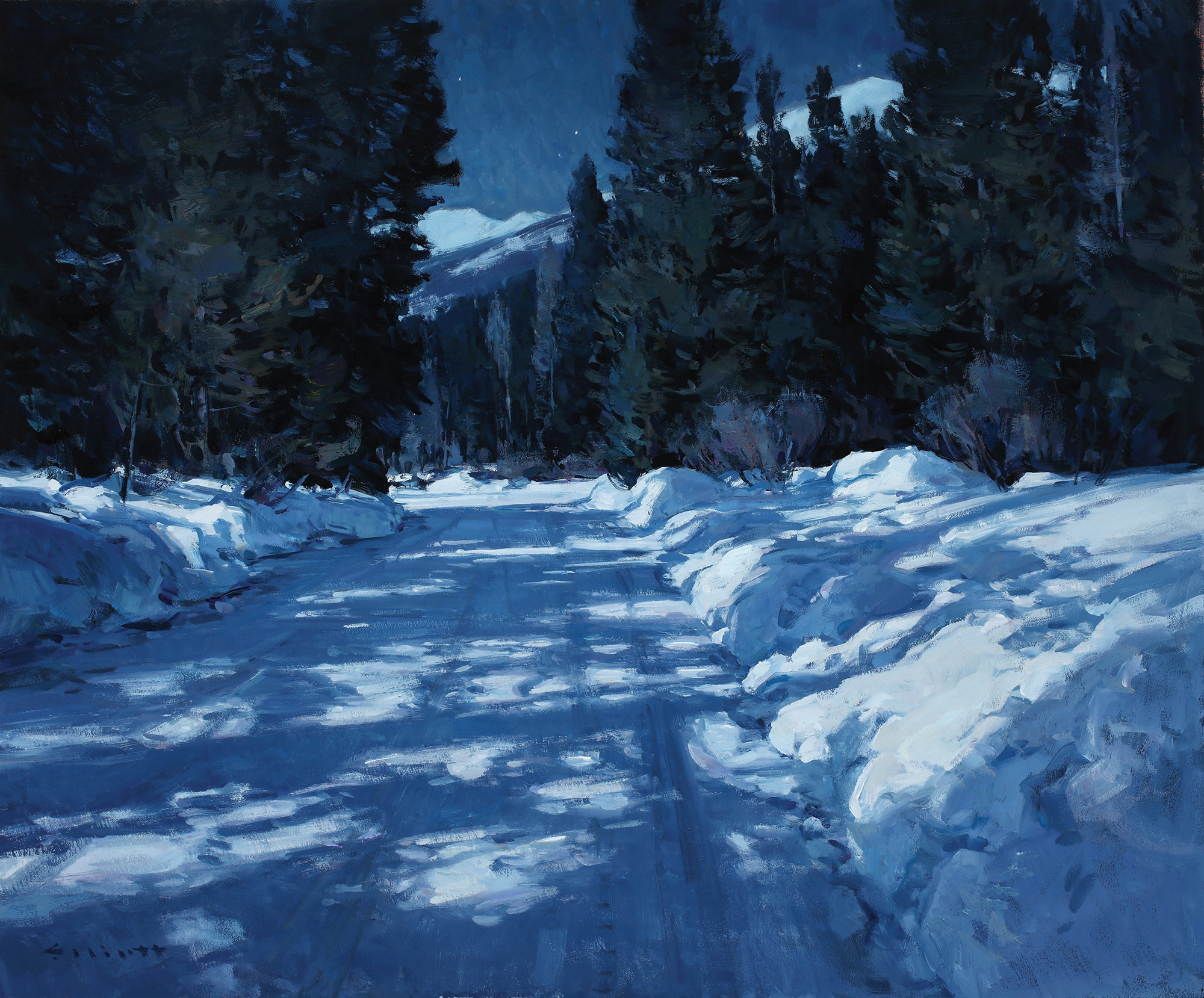