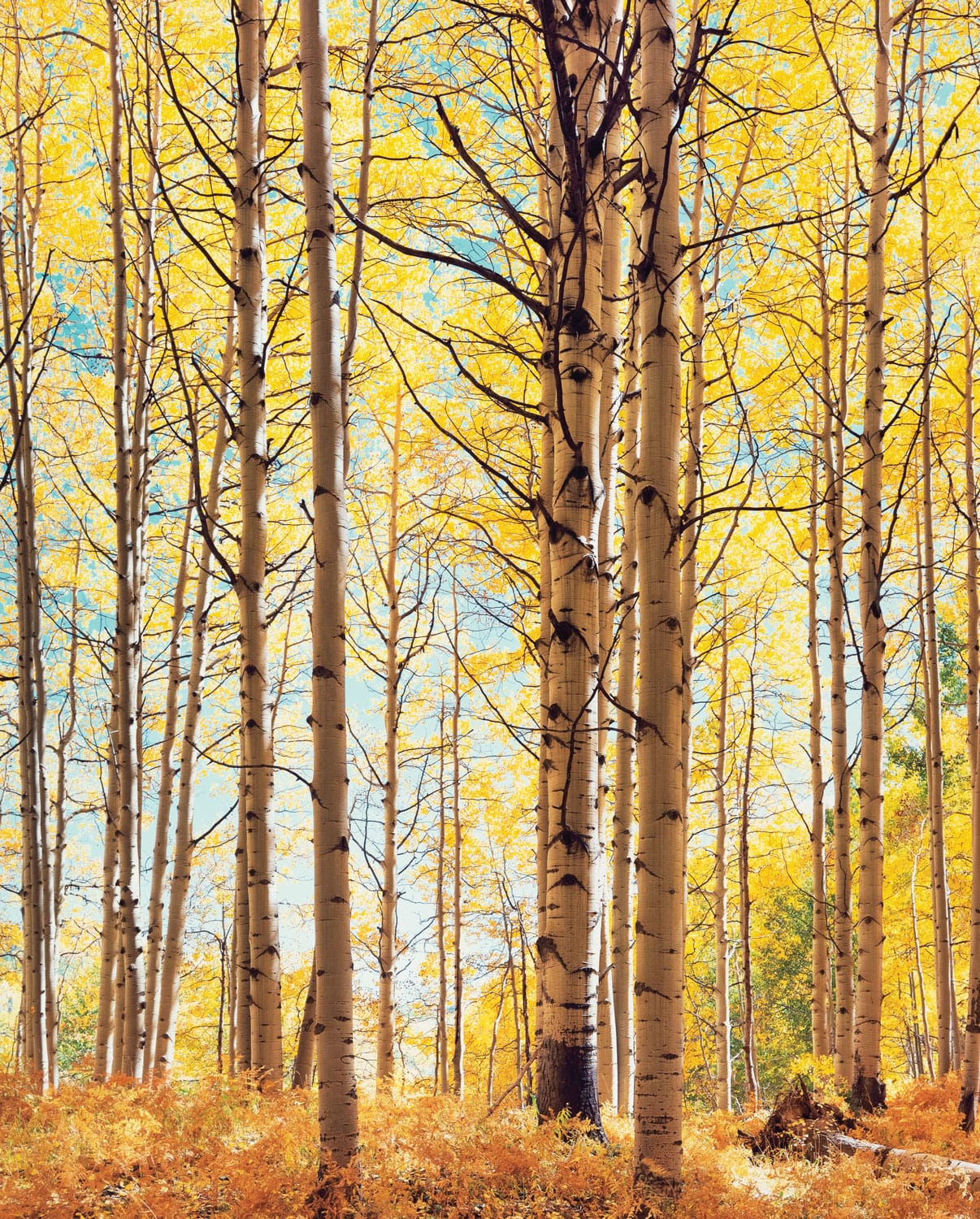 10 May A Sense of Real Life

CHRISTOPHER BURKETT’S COLOR PHOTOGRAPHS achieve a dignity all but vanished in this digital age. His prints convey the natural world through a sense of craftsmanship and technical mastery that, like the inspiration for their creation, can only be called spiritual. “For me, the highest function of art is that it has the capacity to directly convey a spiritual experience to someone else,” Burkett says. 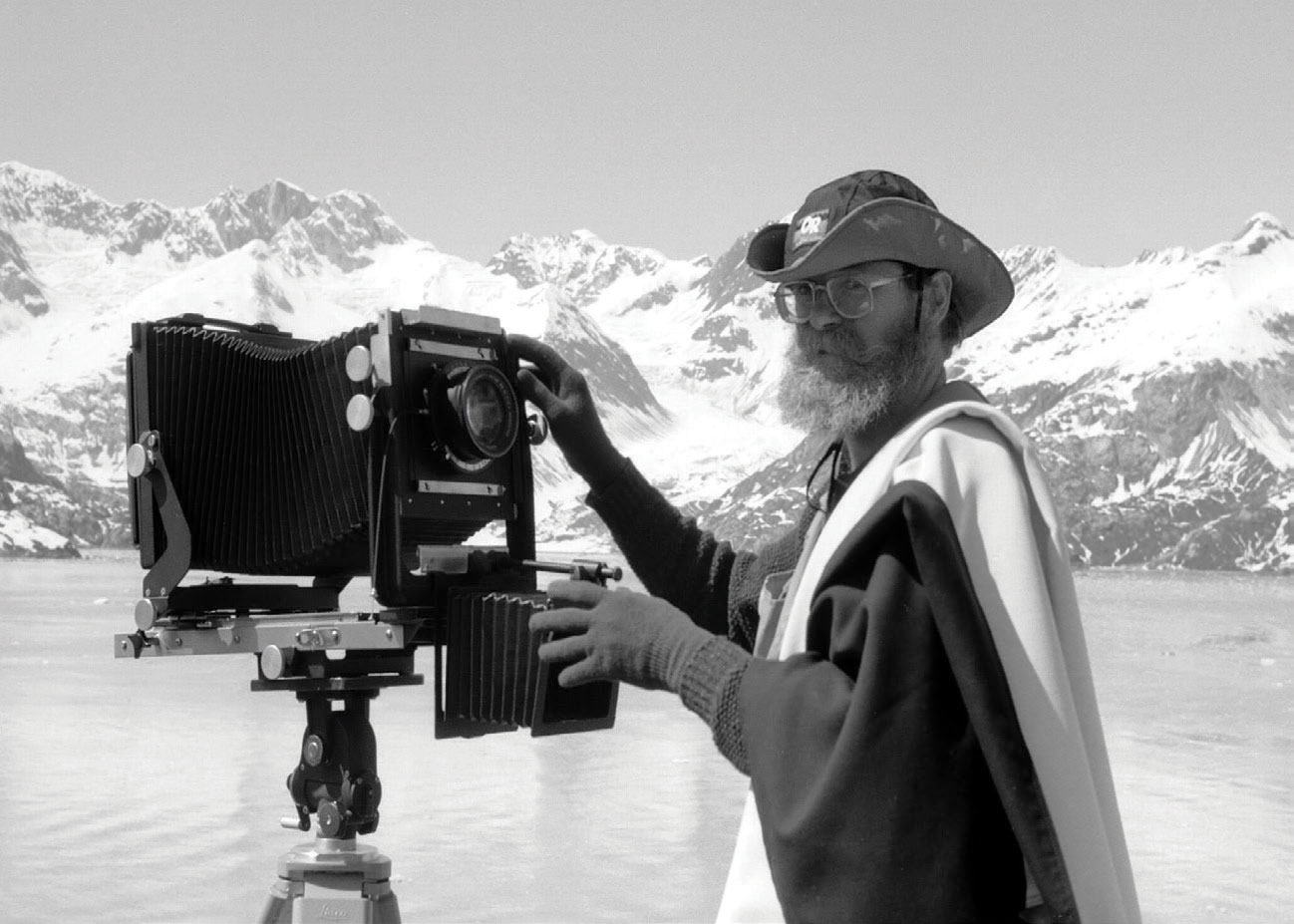 The photographer’s relationship with Eastern Orthodox Christianity informs his work in a profound way. In the secular art world, it may seem unusual to learn that an artist who’s been described as “the Ansel Adams of color photography” explains his artistic ethos as a way to reveal the “gift of God’s grace to share with others.” But as one of the last few photographers still using an 8-by-10-inch view camera and Cibachrome paper, Burkett’s reverence for the transcendent makes perfect sense.

Burkett attributes his interest in photography to a pair of epiphanies in his life. The first came in first grade when his previously undiagnosed nearsightedness was corrected with glasses. He emerged as if from Plato’s cave into a new world, overwhelmed by its beauty and fine detail. As Burkett describes in his book, Intimations of Paradise (1999), “The world was full of incredible, miraculous details everywhere I turned, and I could see them all!” The second came after dedicating seven-and-a-half years of his life in a semi-monastic Orthodox Brotherhood. “Frequently, when leaving the chapel after communion,” Burkett writes, “I would be aware that the world was transformed with light.” That ineffable light challenged the senses; Burkett describes it as “almost fragrant light,” which is just the sort of synesthesia experience critics have when evaluating his photographic prints. The experience led him to leave the order and pursue photography full time. “Because I knew it was light,” Burkett says, describing what he saw, “I knew there might be some way to photograph it.” 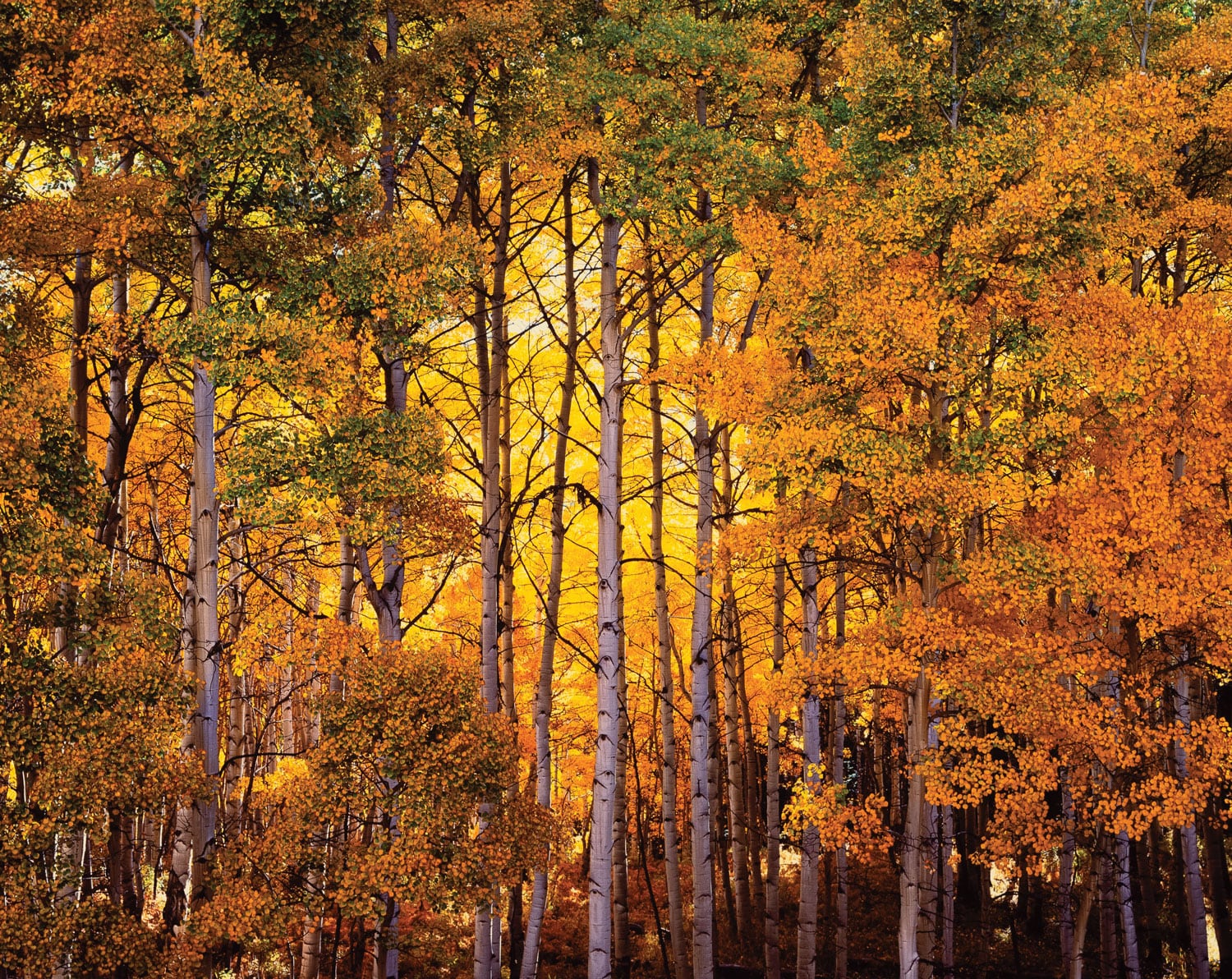 Julia Christopher, gallery director at Photography West in Carmel-by-the-Sea, California, which has been representing Burkett since 1985, underscores the point: “Photography is the only medium that uses pure light as its mechanism, and with Christopher, it truly is all about the light.”

Born and raised in the Pacific Northwest, Burkett and his wife, Ruth, have traveled throughout all 50 states taking pictures with his 8-by-10-inch view camera and his Hasselblad camera. What sets Burkett apart from most color photographers is his meticulous technical capability and control at every step of the process. 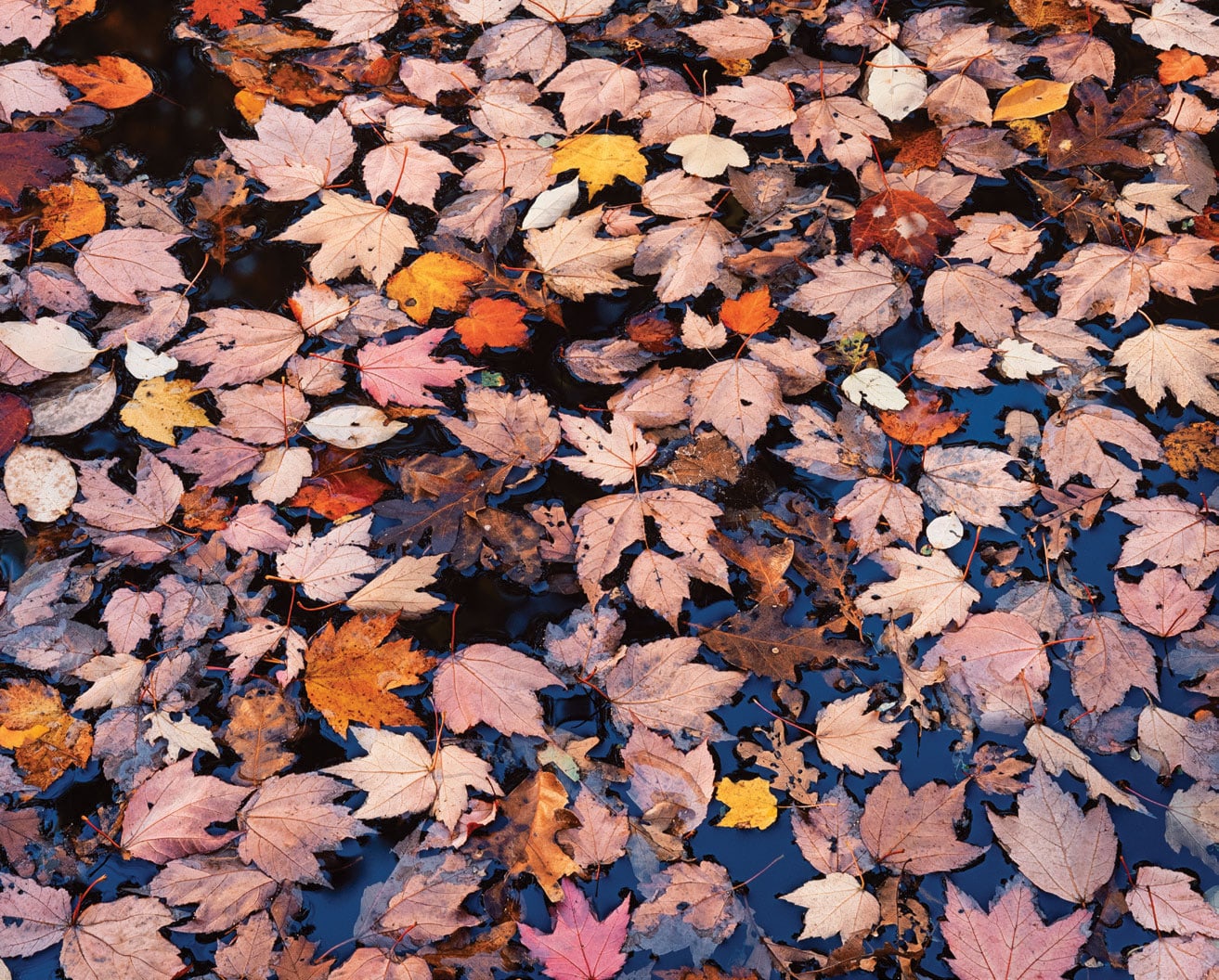 “I don’t know of many other color photographers who actually develop their own images,” remarks Richard Jackson, a fine art photographic printmaker and Burkett’s friend. “And Christopher is a master of capturing the image and making the print.”

Burkett acknowledges that while in the field taking exposures, he has a sense of how the scene will record and can visualize the eventual final print. Burkett works exclusively with Cibachrome (also known as Ilfochrome), which is both incredibly expensive and time-consuming. “In a good day of 11 or more hours in the darkroom, I might end up with 10 finished prints,” he says. “When I am striving to make the print that I can make, speed just isn’t possible.”

Cibachrome itself is something of an anachronism, as its parent company ceased production in 2012. Jackson estimates that Burkett is one of possibly four artists still using Cibachrome, and it’s likely that Burkett will be the very last to make a Cibachrome print since he had the foresight to stockpile a supply of the paper before the company stopped producing it. 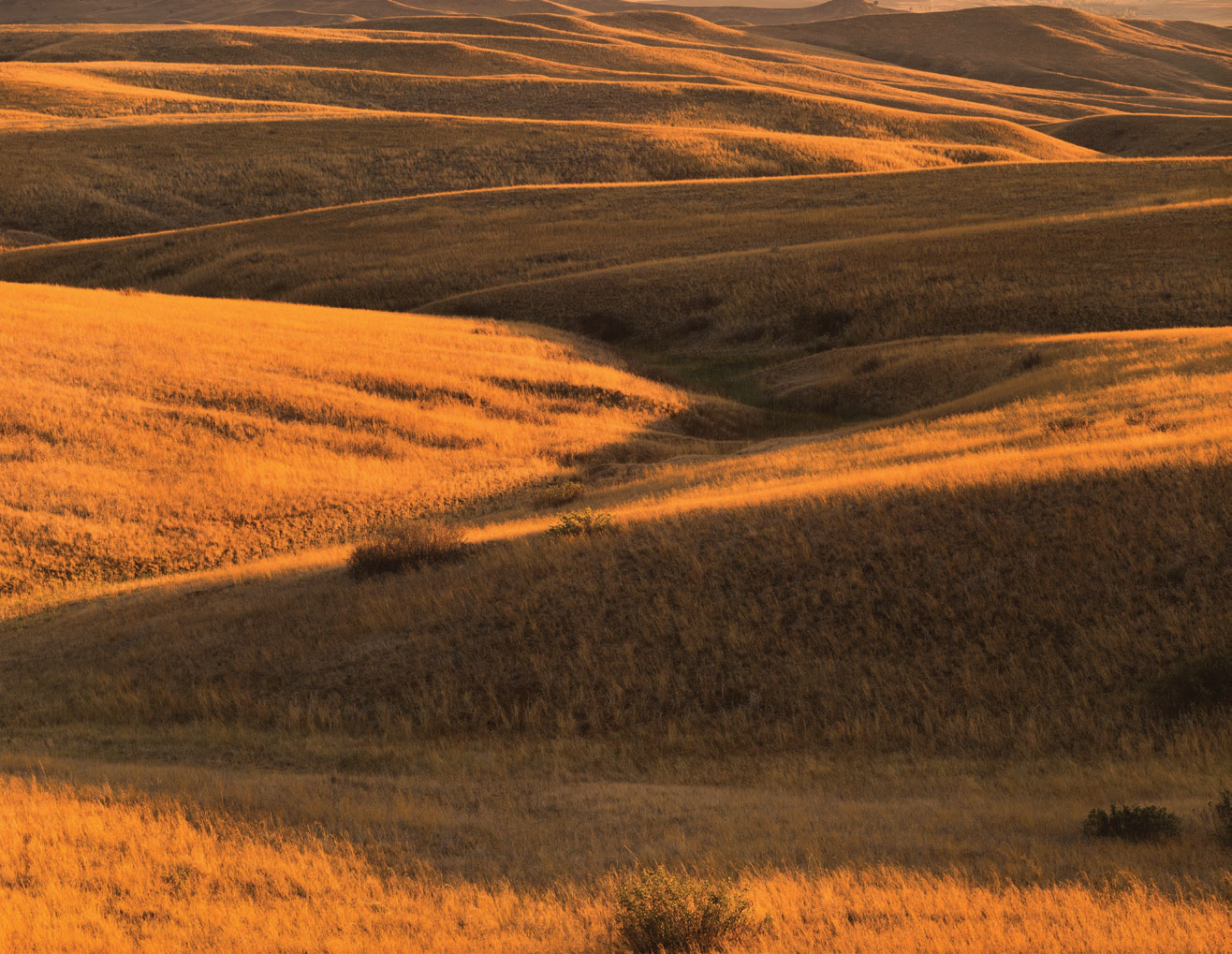 As his supply of printmaking material has dwindled, Burkett has had to make decisions about whether a particular shot is worth the irreplaceable materials. And yet even that constraint has become a blessing rather than a curse; Burkett explains that, “It brings sobriety and weight to each of those decisions.” It helps that the artist worked directly with Ilford scientists back in the day to modify his print processing chemistry “to get more contrast from the Cibachrome material.” 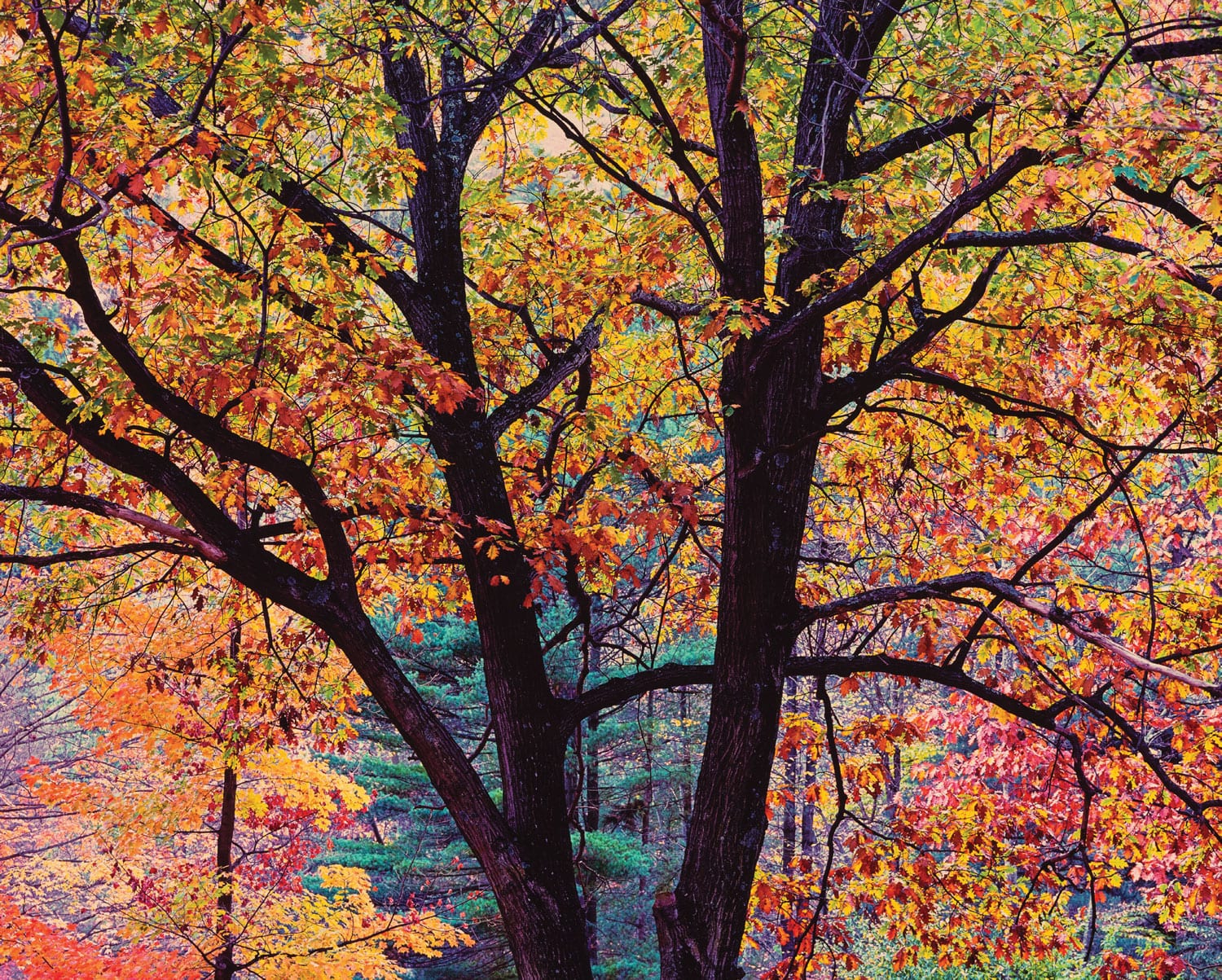 The tonal balance that Burkett has become famous for results from his mastery of contrast masking, a process that sandwiches a black and white negative (made from the color positive) in perfect registration with the color transparency. “Masking is the key to good color printing,” Burkett says. But the artist also works at levels of refinement in color density that’s much sharper than other color prints. “Color changes made on most enlargers are only possible in 1-cc increments,” he explains. A 1-cc increment represents about a 2 percent difference in color balance. “My Durst enlargers allow accurate color changes in 0.1-cc increments, which gives much finer control to achieve the ultimate in color balance.” More importantly, nothing is ever digitally manipulated, and he never uses any type of filter. “My Cibachrome prints are razor sharp without Photoshop or other digital enhancements,” Burkett said. “Cibachrome has a depth and luminosity that digital cannot surpass.” His prints range in size from 20-by-24 to 40-by-50 inches. 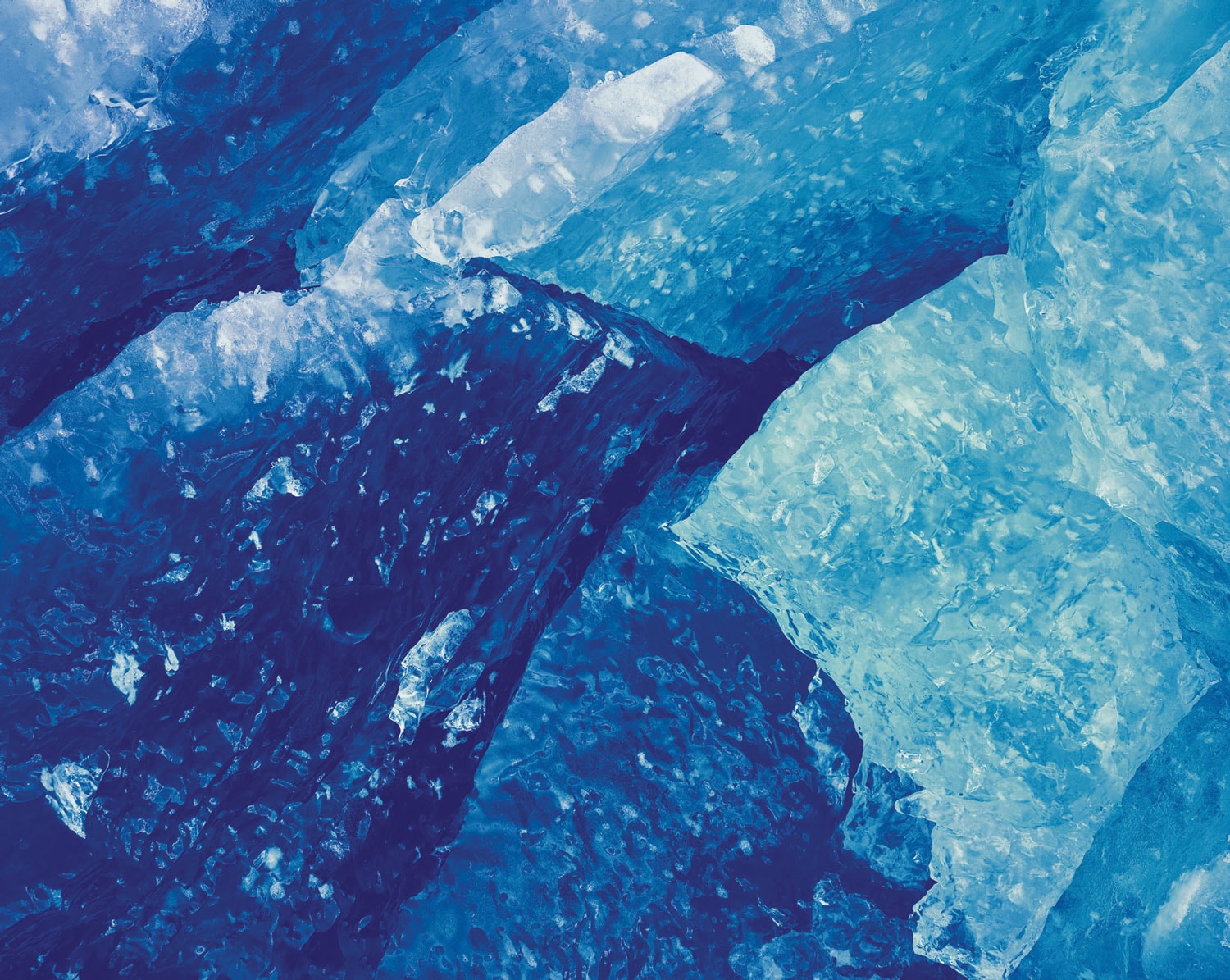 His work is so meticulously composed that his gallerist, Christopher, says, “When I refer to his work, I don’t even call them ‘prints,’ I call them ‘photographs.’” And his precision extends beyond color density refinement: “[Burkett] is the only artist I know who can control the exposure in increments of a 1/10 of a second. He actually works to a metronome in the darkroom.”

Burkett also attributes his ability to get such fine detail and color balance to the Nikkor Apo-EL-Nikkor enlarging lenses he uses, “which have superior resolution and image brilliance, and which took me over 20 years to obtain.”

Burkett’s talent for producing light-suffused color that leaps from a surface of astonishing clarity is further enhanced by the compositions he chooses. His photographs often look like abstract paintings. In Blue Glacial Ice, for example, Burkett captured vivid gradations of blue in Alaska, colors inherent in ancient ice. The effect echoes the power of the Apollo shots of the full earth as seen from the moon, a swirling panoply of varied blues that, beyond its undeniable beauty, evokes a sense of water’s fundamental importance to life. More than one critic has described his images as “more real than if you were there,” but Burkett humbly counters that his accomplishment has been simply to capture “a sense of real life.” 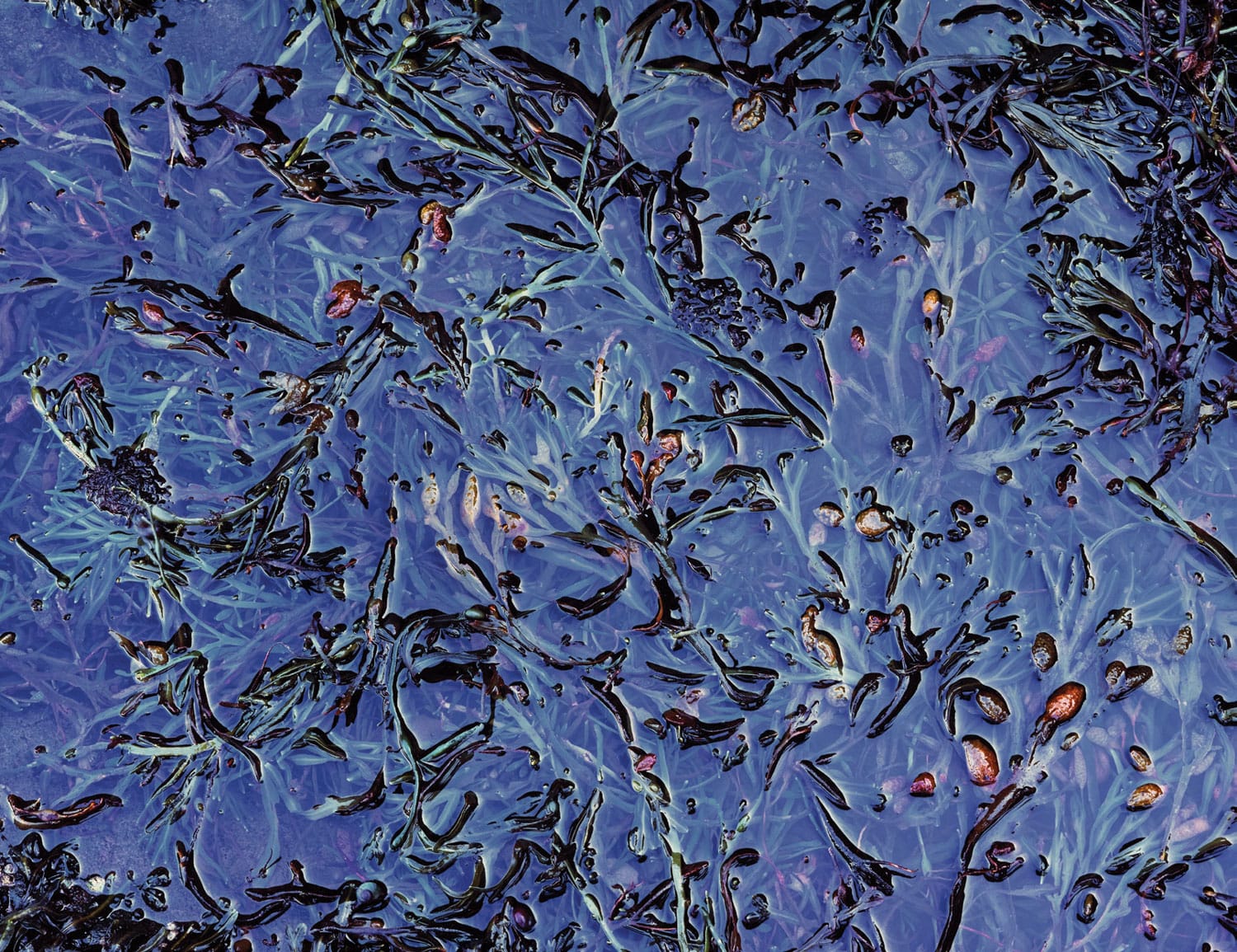 Christopher calls Burkett’s work the pinnacle of color photography because his prints exhibit the incredible dynamic range one expects to find only in the work of black and white photography masters, like Ansel Adams. Burkett has figured out how to fuse light and chemistry to create art that gives a sense of what he calls “uncreated light,” a concept from Eastern Orthodox Christianity.

As another example, Christopher points to Burkett’s Blue Melange, taken in Maine, of kelp floating in the water. The effect of Burkett’s complex contrast-masking technique in this image results in an uncanny, sculptural quality in the photograph: the parts of the kelp that emerge from the water actually seem to leave the printed paper. A similar effect occurs in Swirling Veratrum, which Burkett shot in Alaska. The green and white hues are sharp and clear, and yet the focus is so fine that individual trichomes on the leaves are visible. The effect is a print that vibrates with life.

“The fine print is much more than a mere reproduction of an image,” Burkett explains in a statement on his website. “It is the culmination of the inspiration and vision of the photographer … boldly communicating with whispers and suggestions of worlds previously unseen and unknown.” And because a print requires creative attention at every step along the way, each individual photograph “can legitimately be considered an original work of art.” 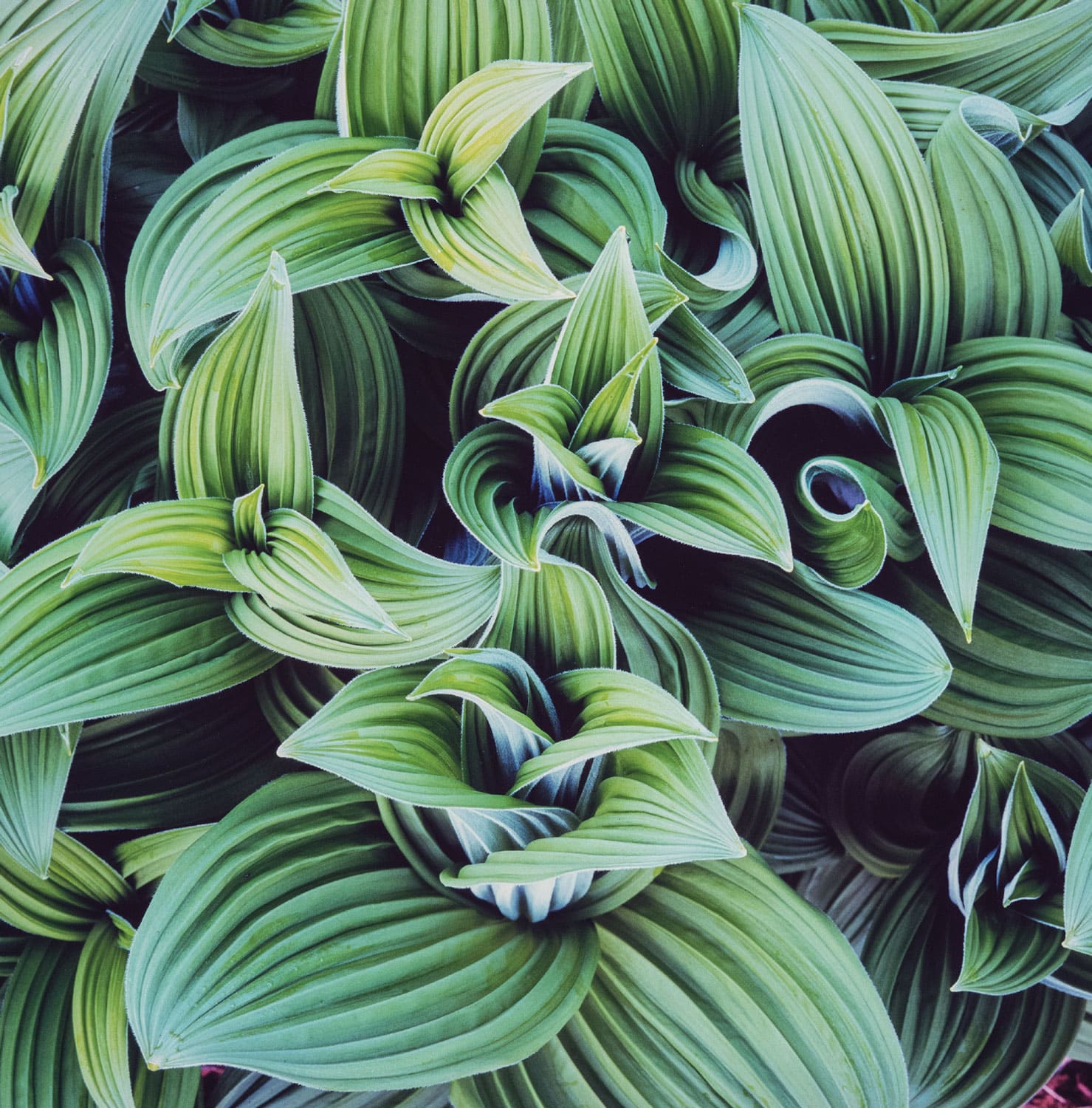 It would be difficult to find another artist who has so fully integrated every aspect of photography. “Burkett’s art is a spiritual calling,” Christopher summarizes. “No one but a monk could perform this kind of exquisite labor.” Whether it’s the philosophy of craftsmanship or the intricate interaction of chemicals that make his images possible, Burkett has devoted considerable thought and practice to his work, articulating his vision in aesthetic, spiritual, and practical terms.

“I am the only one who will print any of my own photographs, both now and in the future,” Burkett says, a statement that’s not so much an artist staking a proprietary claim as it is an artist defending an aesthetic vision that aims for spiritual perfection. “Only in this way is it possible for the print to have the ability to speak to the viewer of the mysteries around us,” Burkett says. “Those that fill earth and heaven, and make our souls sing with thanksgiving and praise.”