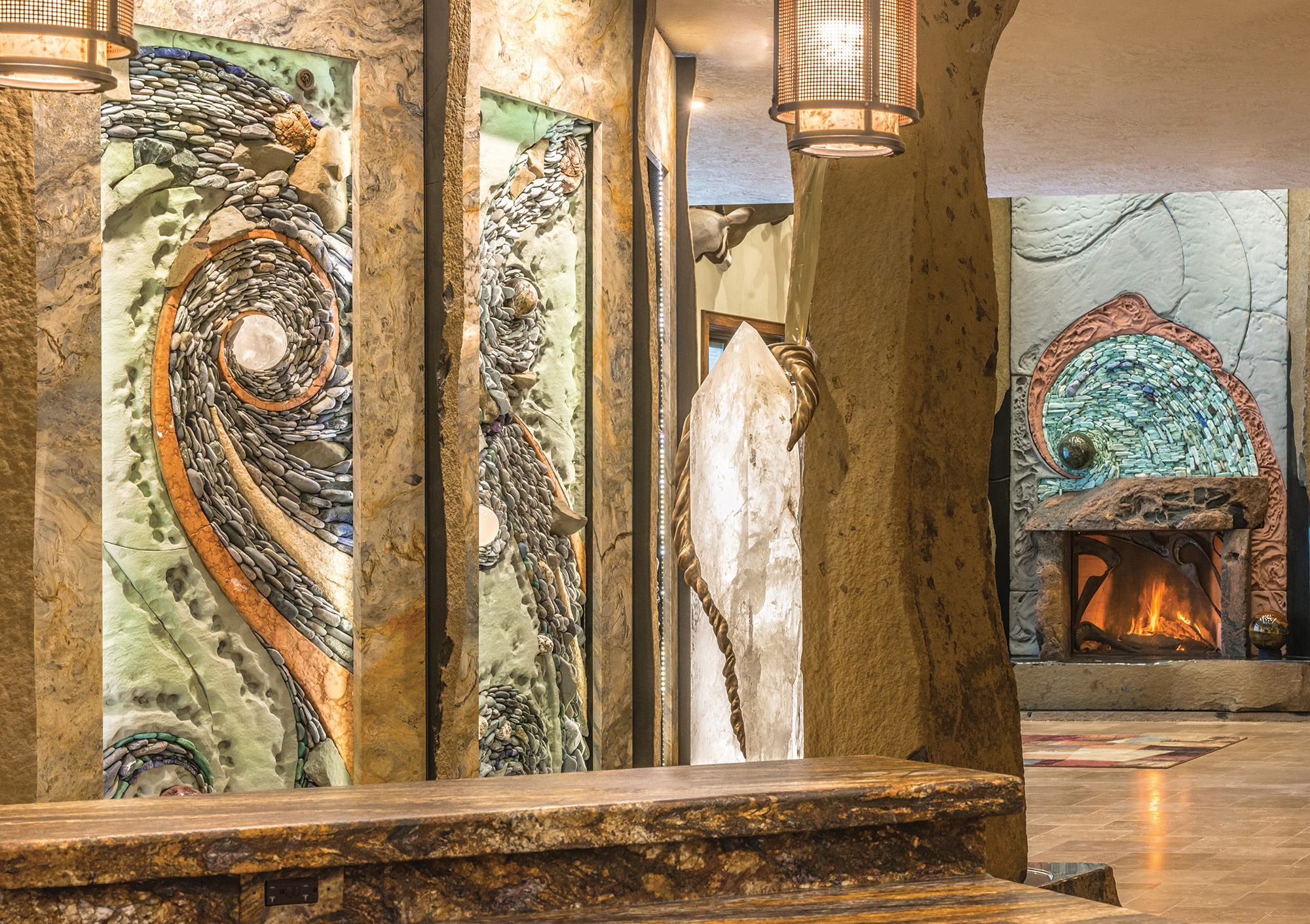 In this 4,000-square-foot space, Andreas and Naomi created 10 natural stone, crystal and bronze pieces made specifically for their clients. The installation began in March 2014 and was completed with its final crystal and bronze feature in December 2015. Materials for this project were gathered mainly from North and South America and Africa. The fireplace in the great room is called "Honoring Creation" and includes a massive 45-pound kambaba jasper sphere from the heart of Africa as its main energetic feature. This crystal is said to have been formed from the primordial ooze which formed the Earth at the beginning of creation, and promotes specific protective, regenerative and healing properties to the home.

WAVES OF STONE SPIRAL WITH COLOR, patterned and stacked, evoking both the natural world and the otherworldly. The rocks are laid so that each storied piece becomes a wandering step in a journey that always finds its way home.

These are the walls, the sacred totems, of Andreas and Naomi Kunert who, together, with an almost fairy-tale magic, spin rocks into gold. Andreas works through intuition while Naomi guides the process through insight and perception.

With their designs in high demand and a start-to-finish time that can last months, the Kunerts rarely do a piece that isn’t a commission. Their reputation precedes them and most clients find out about their work through word of mouth.

“Our business is to consult, design and build timeless stone art installations for private and public spheres,” Andreas says. “We work collaboratively with professionals in architecture, engineering, city planning and within the privacy of a home.”

In 2016, a highlight of Andreas’ and Naomi’s calendar includes a prominent booth at the Safari Club International Convention in Las Vegas. The Safari Club International (SCI) protects hunters’ rights and promotes wildlife conservation. Its primary fundraiser is the convention and it attracts thousands of people from across the globe. Last year, Andreas and Naomi had a small booth, but because of the outpouring of interest in what they do, SCI has given them more attention.

However their clients find the Kunerts, every project starts out the same. The process begins with both artists meeting the clients, Andreas says. “That’s very important. In the end what we create for them is a ‘soul portrait,’ not a green wall that fits with a blue wall; it’s very specifically for them,” he says.

First they walk the space where the piece is to be built and talk with the client to determine which path the artists will take. “From that conversation we think about it, sleep on it and then we’ll make a sketch,” Andreas says. “I find it important that people trust the process. Let’s say we’re building a fireplace. They give us the size and they like certain stones. Those stones will become one of the ingredients. But they have to trust us that we might find a perfect stone that will be used,” he says.

“We say ‘listen to the stone,’ it will give you gifts along the way,” Andreas says. He has been an artist all his life but was challenged by memory loss as the result of several childhood traumas. From that experience he learned to trust his instincts.

“That has helped shaped my work,” Andreas says of dealing with the memory loss. “I did apprentice in stone and worked with a master mason,” he says. “But everything I did was through intuition because my memory failed to allow me to learn and follow the traditional techniques.”

It took years for Kunert to develop his confidence and unique style. “I had a drive to be different,” he says. “I always wanted to be the best. I’m at an age now where I realize there is no best,” he says. “You do your best and let that speak for you.”

Emmet McCusker, a musician and engineer, commissioned a fireplace for his home. Anchored within slabs of basalt and ocean pearl, the piece utilizes semiprecious stones as well as a crystal ball at its center.

“I met Andreas when he was doing a large public art project,” McCusker says. “He came to my home and we discussed the possibilities for my fireplace.” After some discussion Andreas came up with a sketch, which McCusker loved. “We picked out rocks that were meaningful to various members of my family and he wove them all into a tapestry.”

The whole project took more than three months to complete. But it was worth it to McCusker. He uses the space now for house concerts. “It’s been a source of great joy,” he says. “Andreas really created an amazing space.”

When Andreas met Naomi, his partner in work and in life, everything seemed to come together for him to create not just stonework, but something that was more than the sum of its parts. Naomi’s specialized work in trauma and neuroscience helped Andreas to heal past trauma and regain his ability to access current and past memory. “For the first time, I had clarity to the unique techniques I had developed working with stone, as well as an understanding of the importance of the clients, of their story and the inspiration they bring to the pieces,” he says.

Naomi has been studying stone and ancient sites for many years. Her fine arts education included a major in sculpture and painting, she says. “In the fourth year of my program I was diagnosed with thyroid cancer and my life took a departure into the healing realm.”

Besides trauma and neuroscience, Naomi studied shamanism with First Nation people in Canada. “This was ancient knowledge that was passed down and it brings perspective to the art creations we do together, giving voice to the stone,” she says. Naomi works with the metaphysical qualities of stone and crystal, calling their spirit an ancient voice.

While they are building a piece, Andreas and Naomi are mindful of the work, the people involved and the place where they are working. Their goal is to match their actions with the intention of the piece. “When you hold good intentions for a person, you hold that place of beauty and creativity,” Naomi says. “You are opening that doorway of what is possible for people.”

The spiral, or the golden ratio of the Fibonacci sequence, is of particular importance to Andreas. “Over my career I’ve studied and evolved spirals in my work,” he says. “I would see spirals in the sky, in the clouds, in the rivers and in the ocean. So I developed these patterns,” he says. Seven years ago, a fine art and geometry professor told Andreas that he was working with the golden ratio, calling it sacred geometry. “There are only very few artists who can do this intuitively,” Andreas says.

Andreas is one of those artists. He does it naturally, crediting the stones with the design. “The magic is in the stone,” he says.

Seeing the magic is really the perfect way to look at their work: Each piece, perfectly stacked and placed, adds up to an enchanted path. Follow the swirl and curve of the stones. Let them lead where they will. 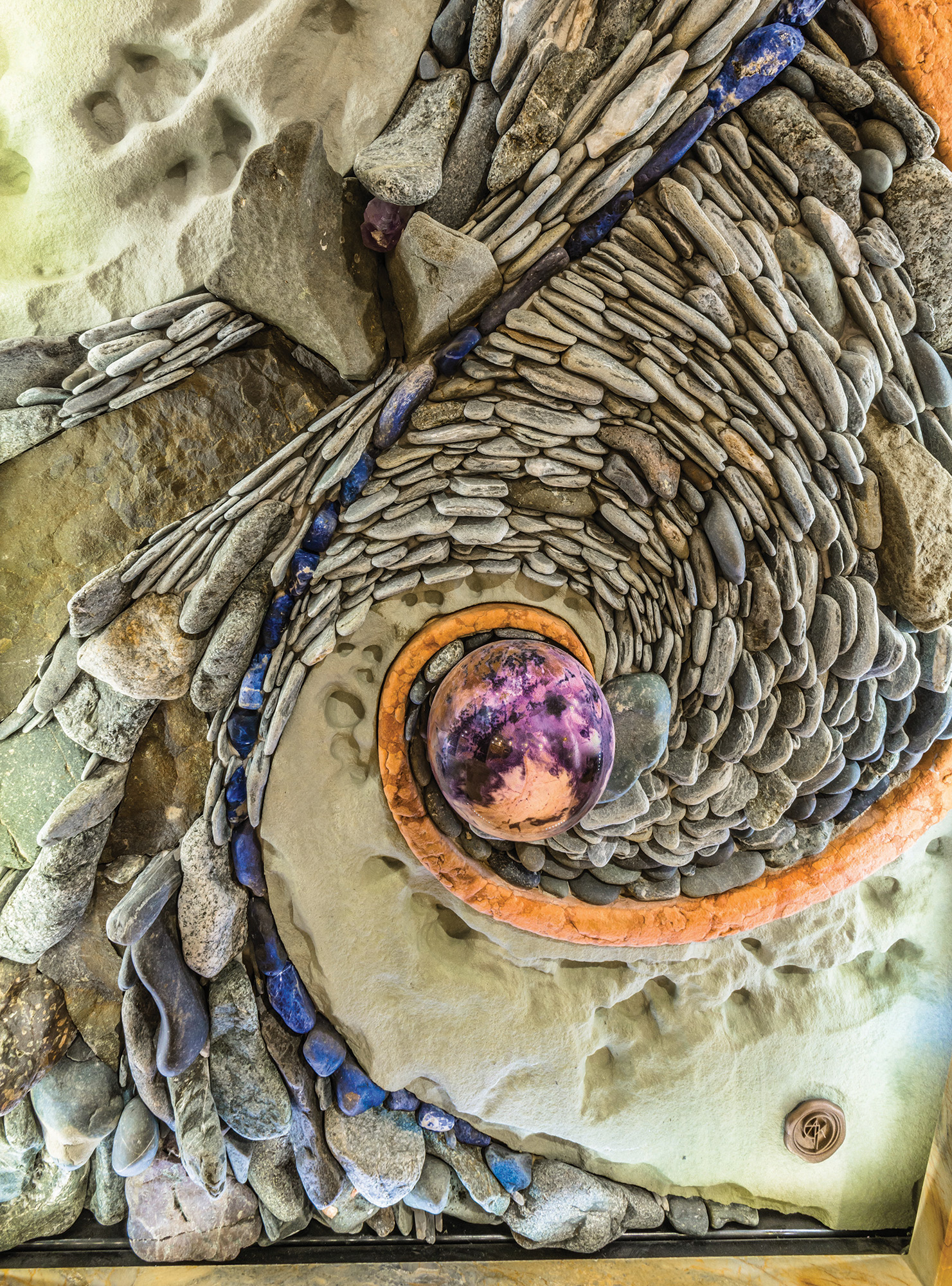 A turned bertrandite Tiffany stone is at the center of this custom-made mosaic. 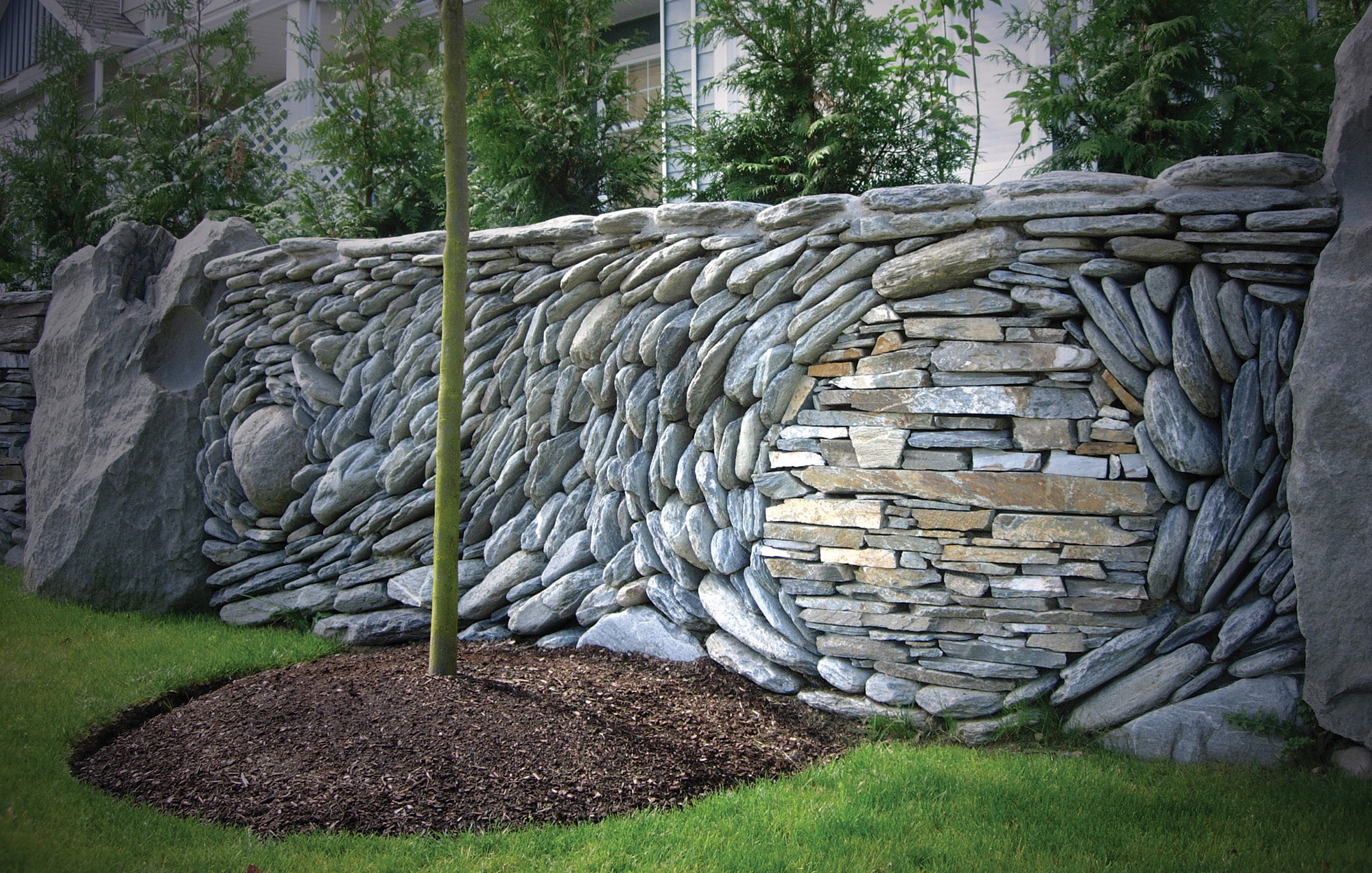 The Kunerts’ “Flight of the Swallow” retaining wall mosaic is made of natural stone saucers and ledge stones. 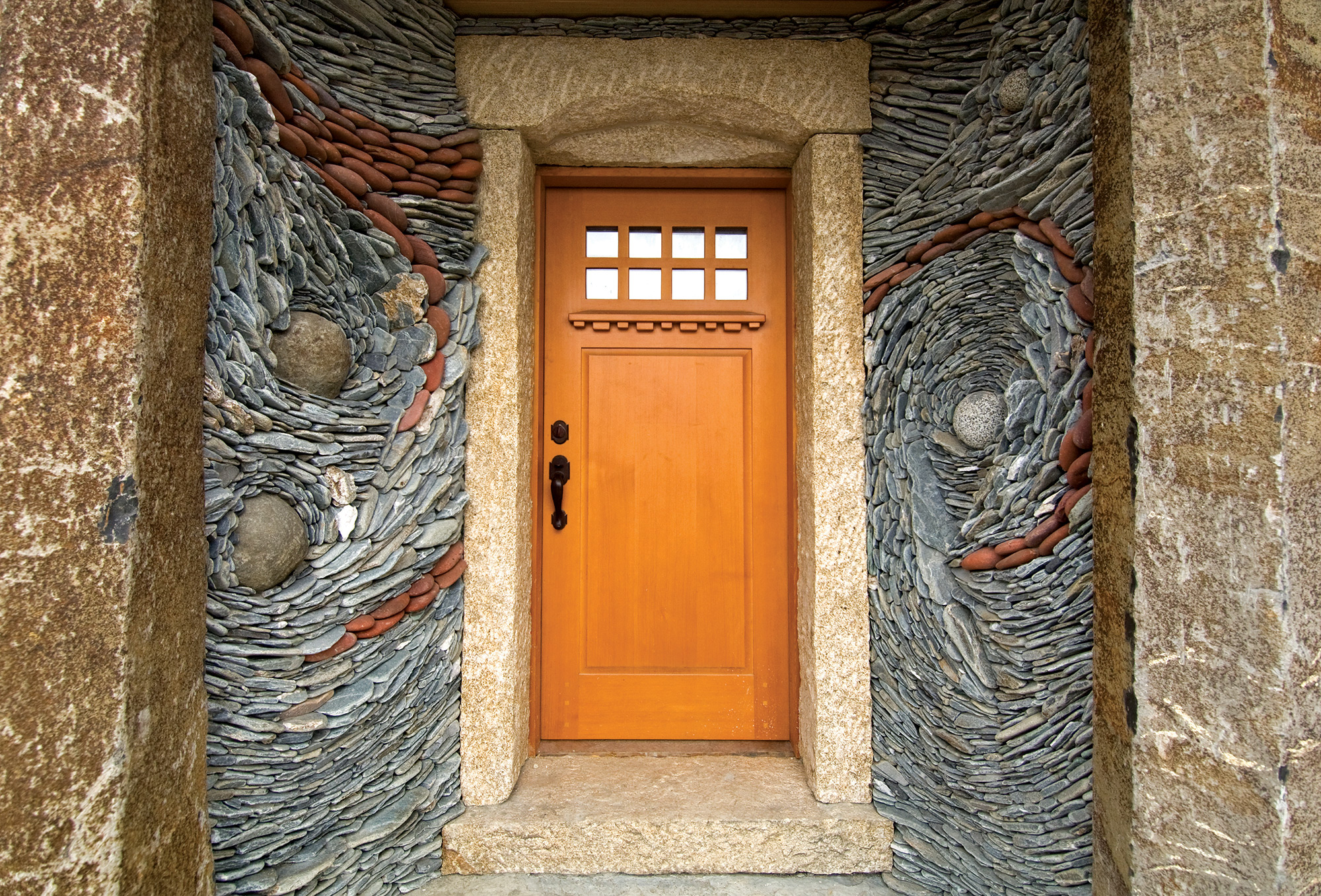 This recessed entryway is framed with chiseled granite and natural stone mosaic saucers. 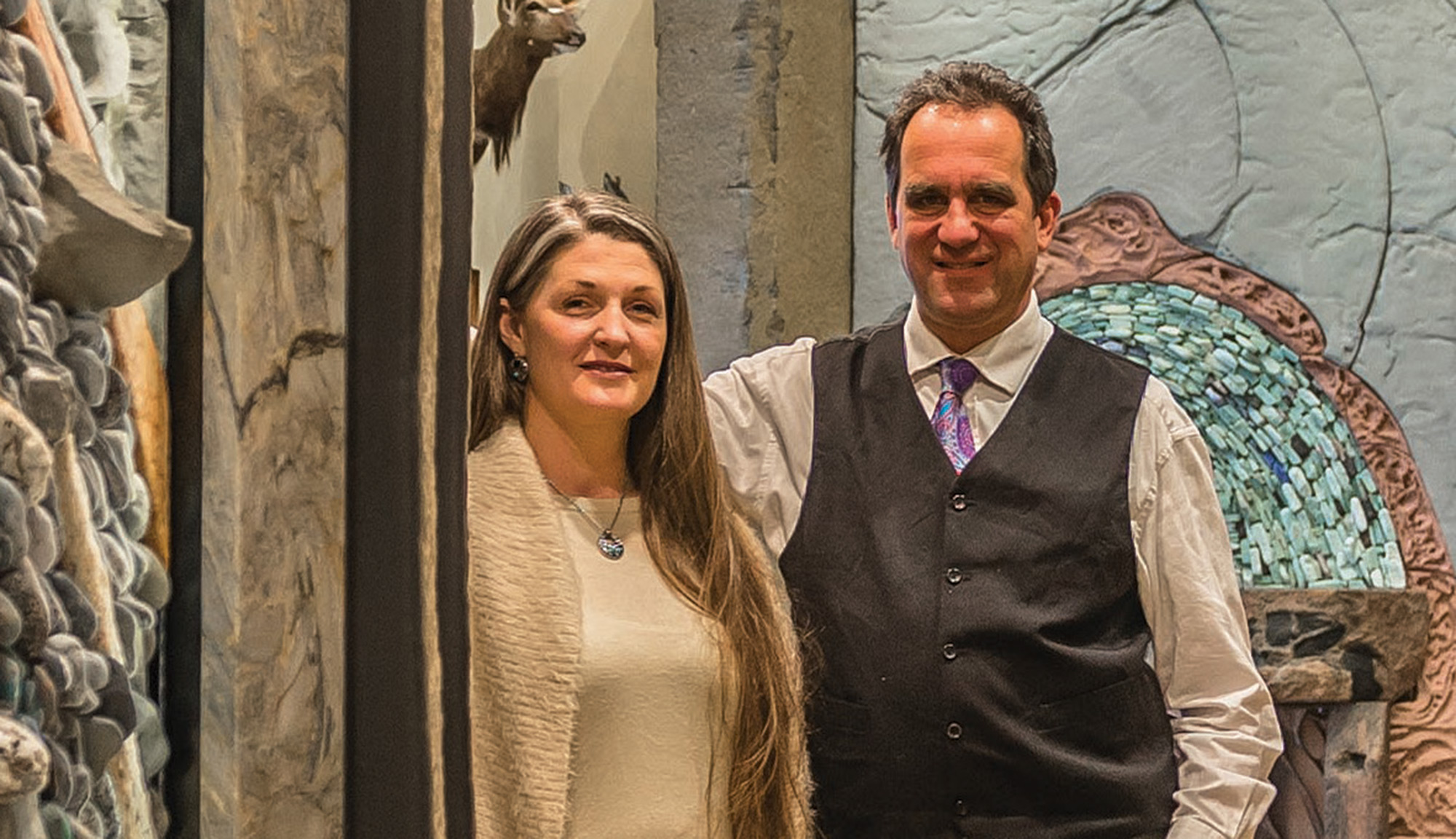 Naomi and Andreas Kunert stand before their work.

A traditional fireplace is inserted into the carved sandstone installation with illuminated white calcite crystal spheres. 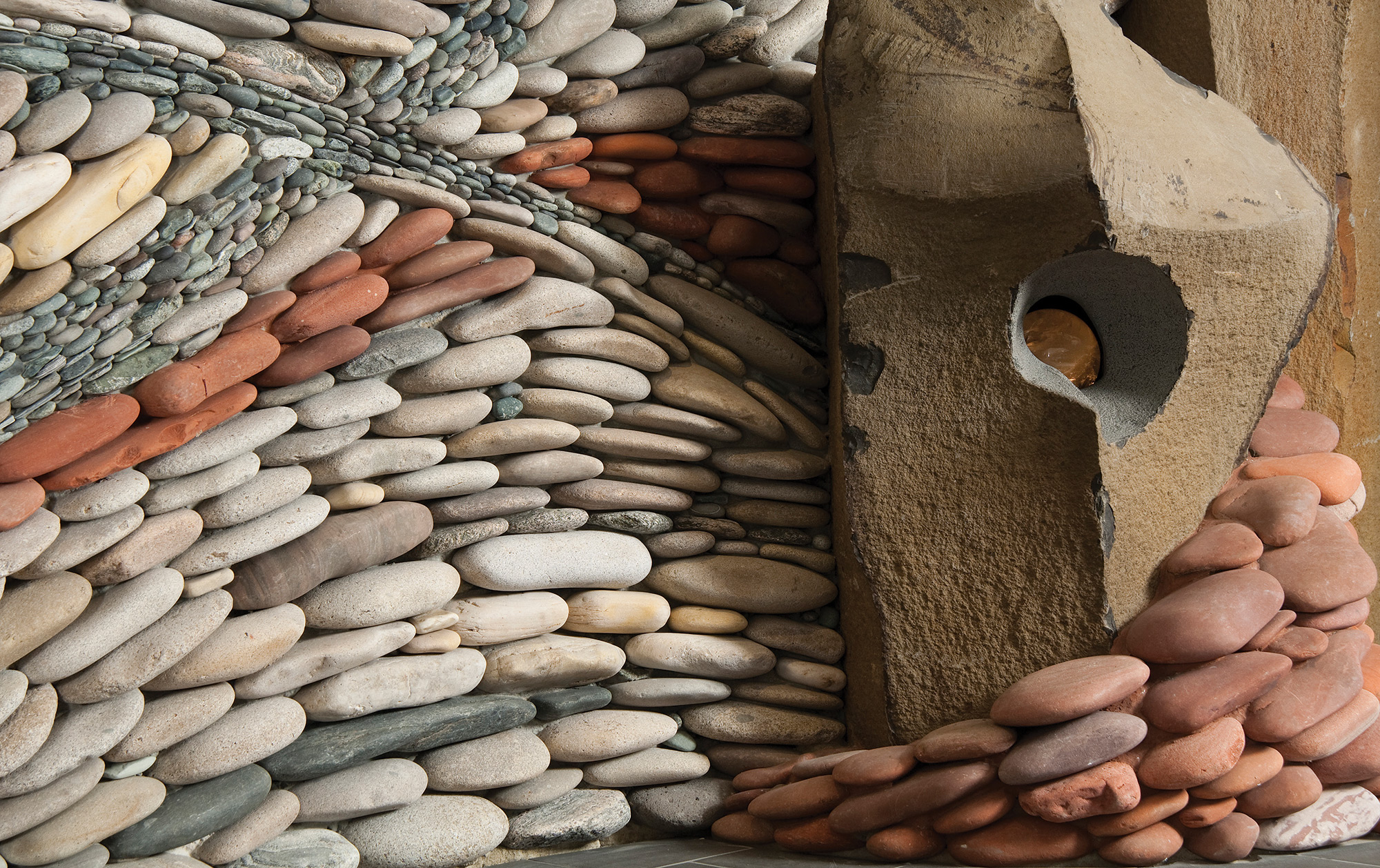 This detail is from “Ravyn’s Song,” an 8-foot-tall lobby installation at the Nanaimo Museum in British Columbia. | 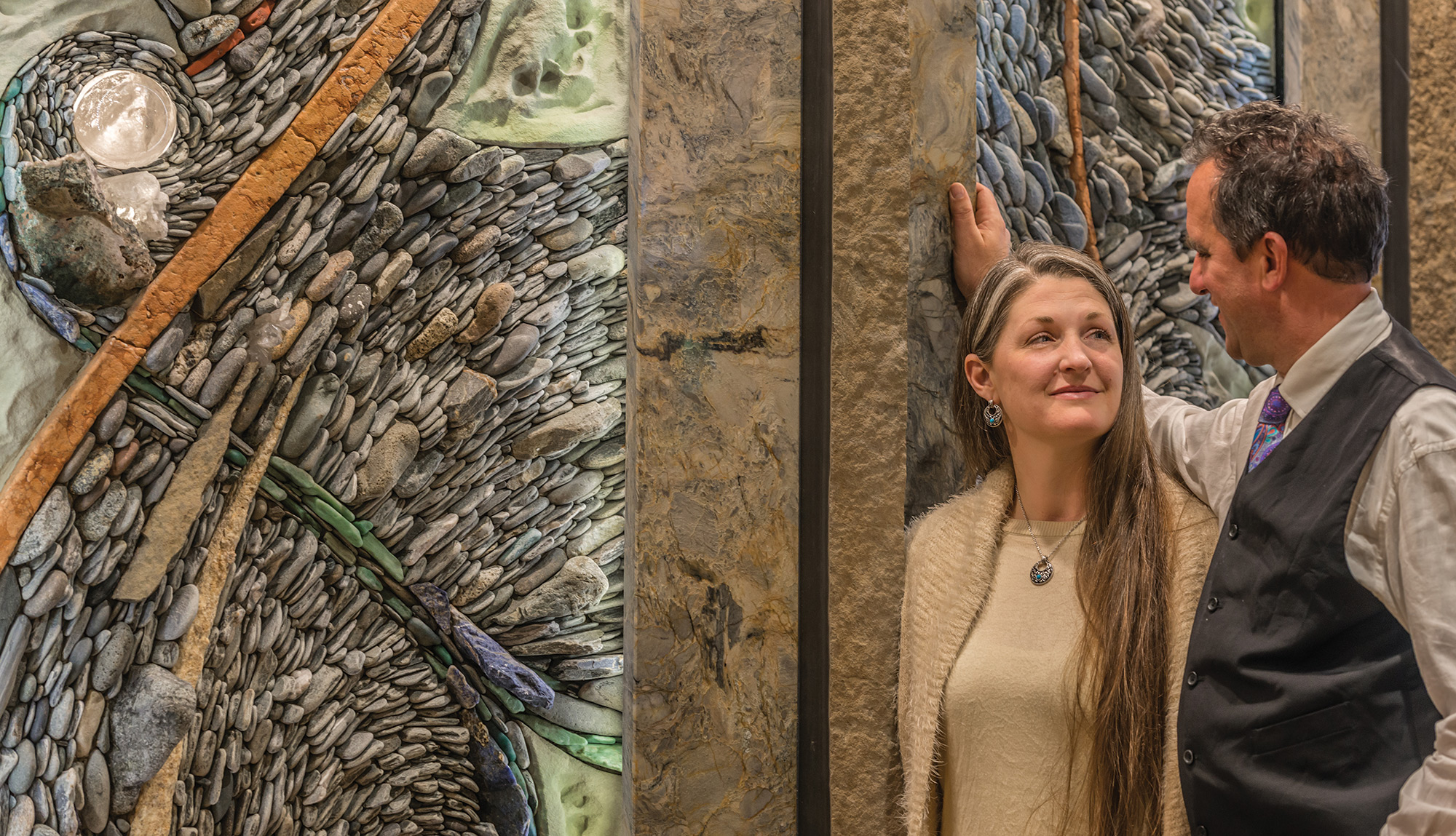 Naomi and Andreas Kunert stand before “Generations,” a 10- by 35-foot installation.