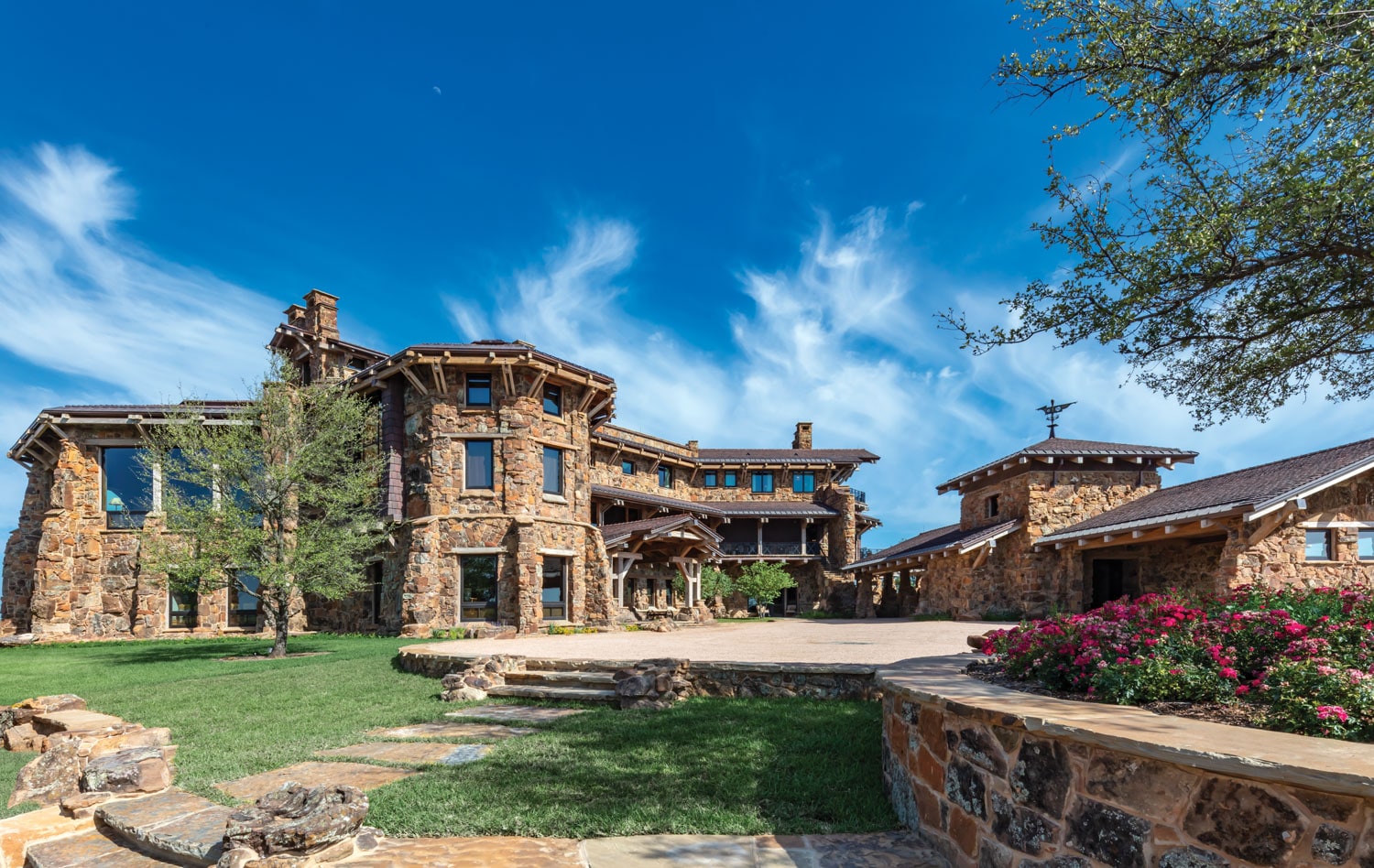 Set on the highest point of a Texas ranch, the lodge is at once a home, a guest house, and an art museum with expansive space for charitable events. All of the exterior timber is reclaimed, and the roof materials were custom-made by Ludowici Roof Tile in Lexington, Ohio.

12 Sep An Homage to Craftsmanship

TWO-AND-A-HALF HOURS WEST OF DALLAS, Texas, on a hilltop with magnificent views, the 32,000-square-foot Cook Canyon Lodge is gasp-worthy on its own — a little Italianate, with a nod to the Depression-era stone and wood buildings of Yellowstone National Park, and an embrace of classic Craftsman style. But, as architect Greg Wyatt says, it’s nothing that’s been seen before. 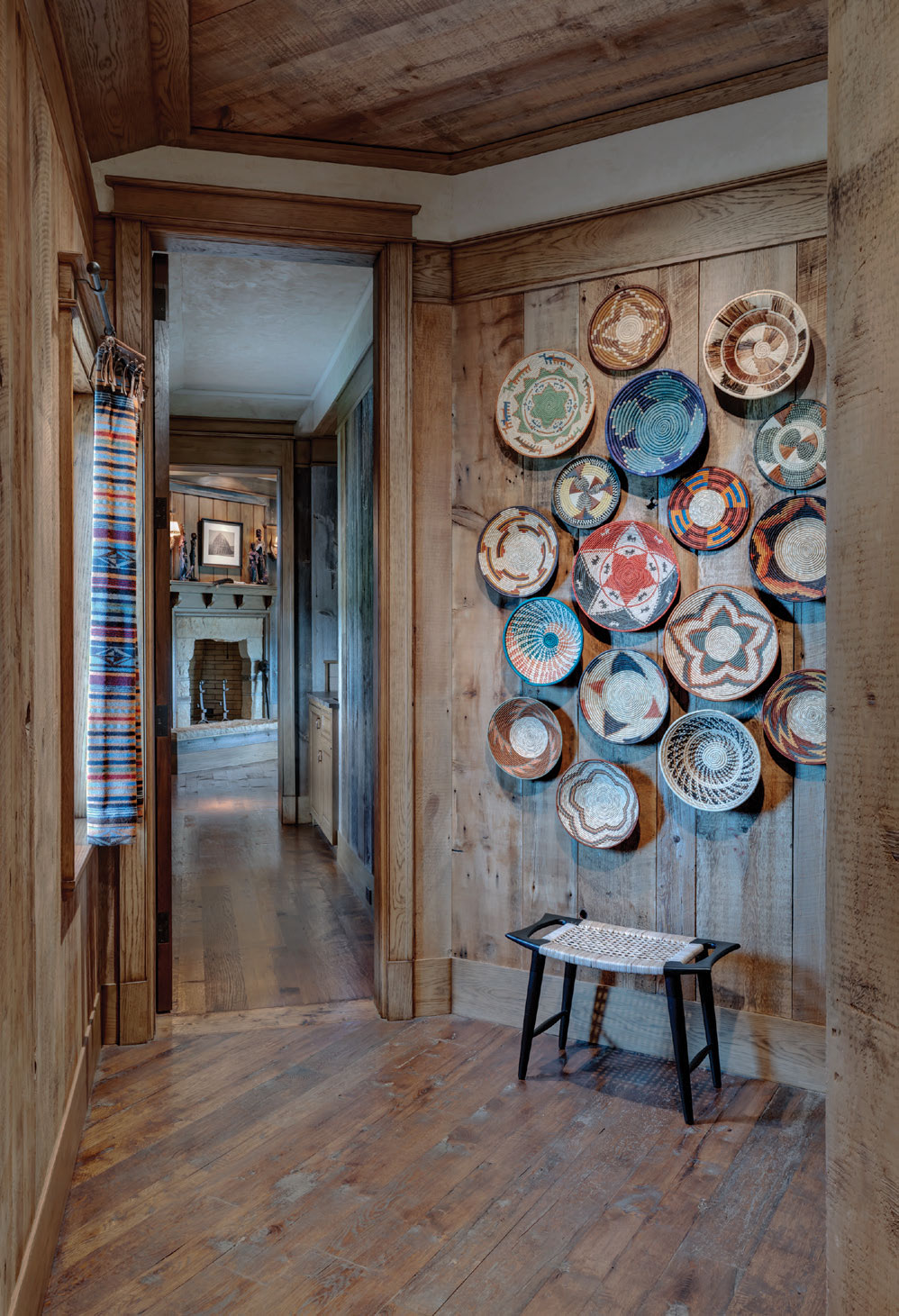 A hallway is decorated with handmade baskets collected during the homeowners’ many trips to Africa.

“It’s this curious mix of: is it a home or is it a lodge?” says Wyatt, founder of Wyatt & Associates in Dallas. “Is it a guest facility, or is it an art museum? It’s all of those things.”

While still under construction in 2016, Forbes described the home as a “palatial hunting lodge.” Originally, owners Jan and Trevor Rees-Jones envisioned the lodge as a large guesthouse with plenty of room for social events and for their nonprofits to meet. A significant requirement was space for their impressive collection of Western art, including works by Frederic Remington and Charles Russell. But as construction progressed, the Rees-Joneses (who had another house on the ranch) realized that this new place was going to be so extraordinary, they’d have to move in, which necessitated adding a master suite onto one wing. 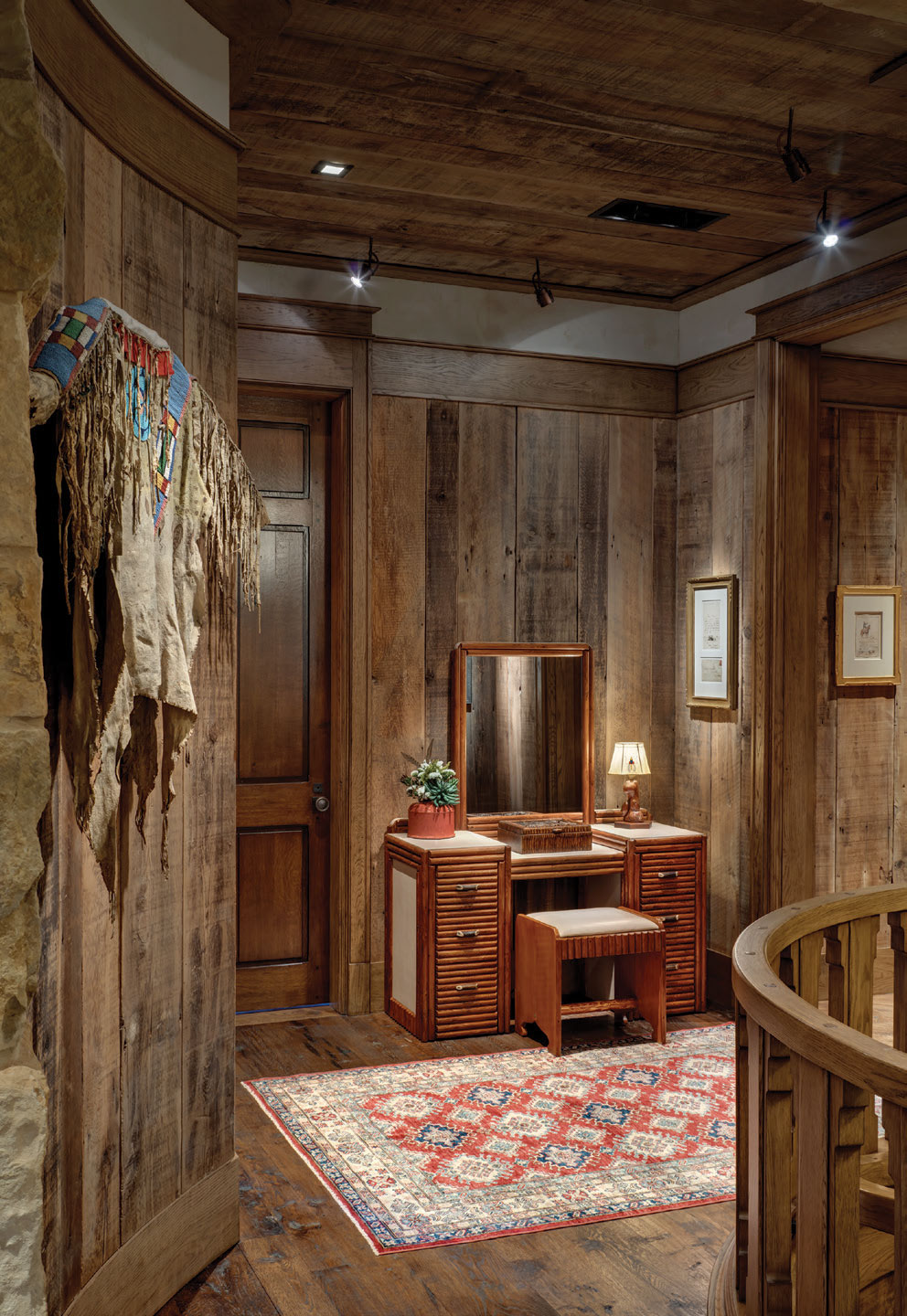 The dressing table in this bedroom is an original Molesworth, the artwork is by Charles Russell, and a Native American tribal shirt hangs on the adjacent wall.

Wyatt is known for exacting detail in his designs and his choice of Lueders limestone for interiors. The Milsap stone exterior involved tremendous labor. And his design called for old wood, which required matching new white oak with unique recycled woods, challenging general contractors Mark Johnson and his son Zane of Megaco Inc. to the limit. Even the finishes on the interiors were a test. 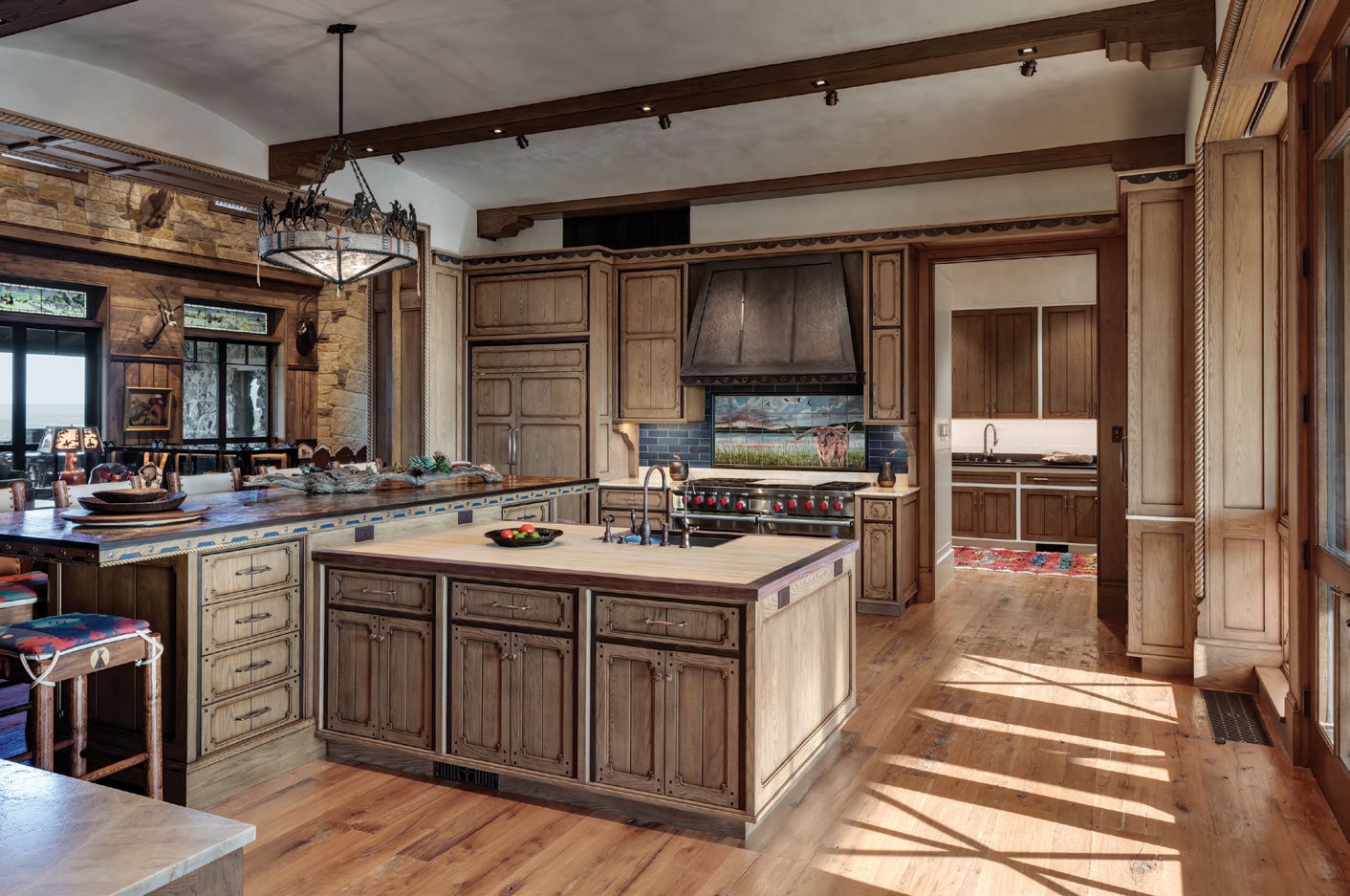 A custom tile mural over the kitchen cooktop is by Arizona artist Julia Sweda, created from a photograph of the ranch. The chandelier over the island is an original by Peter Fillerup, while the Molesworth-inspired stools were designed and handcrafted by Tim Lozier of How Kola Furniture in Cody, Wyoming.

“I think we were up to 34 [finishes]. They’d ask, what’s this crazy finish schedule? What’s Plaster 2-B?” jokes interior designer Casey Lasky, who joined the project nearly four years ago and is now a member of Wyatt & Associates. “The old wood took some arm-twisting,” Wyatt explains. “It’s a pain in the butt. It’s hard to find and not consistent, and you never know when you’re going to get it.” 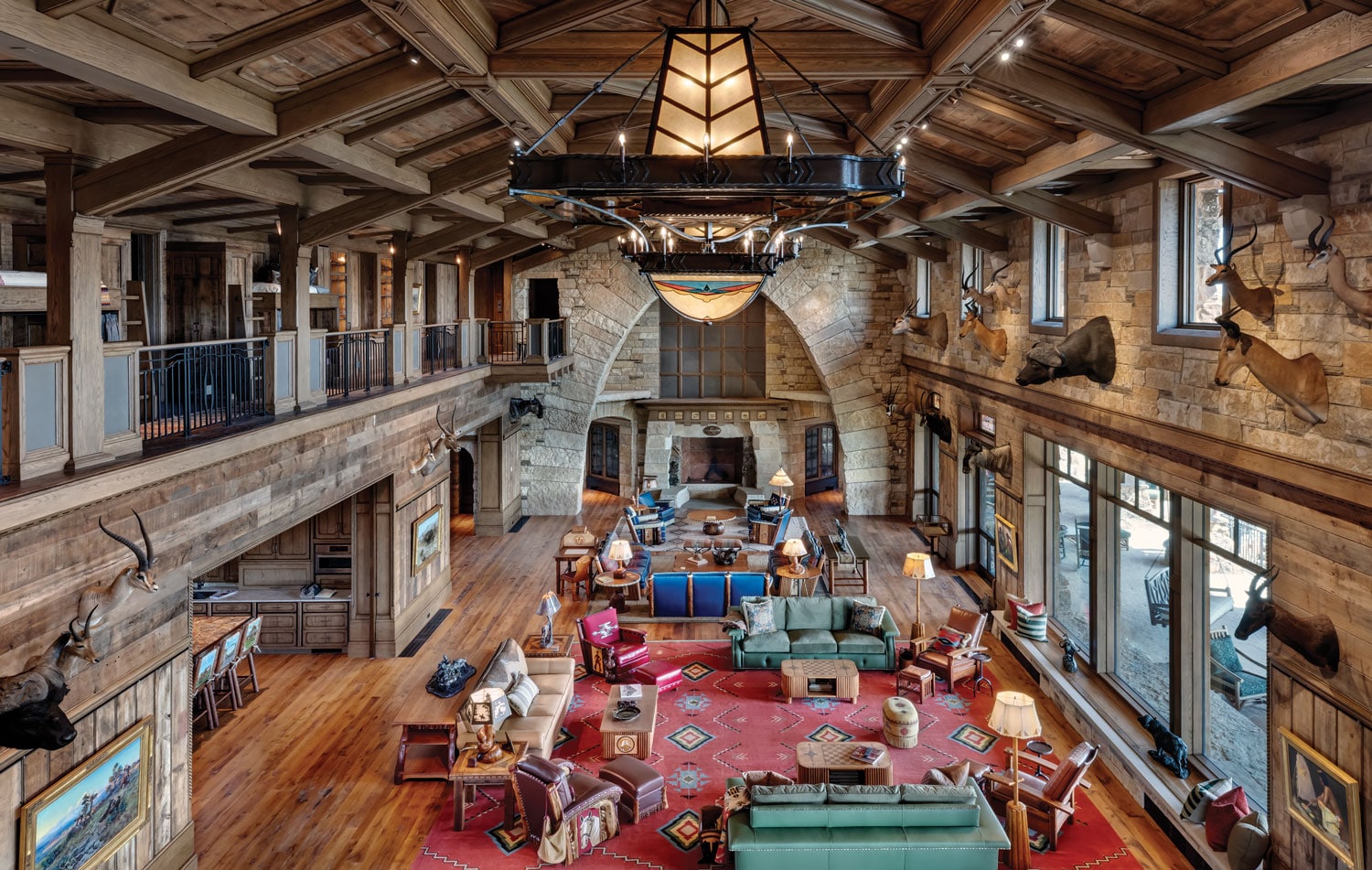 In the great room, reproduction and origi- nal Molesworth pieces mix with custom furniture from Hancock & Moore. The chan- deliers were custom-made by Jeff Morris of Heart Four Ironworks in Jackson Hole, Wyoming, and the large rugs are by New Moon and Truett Fine Carpet & Rugs. The flooring is reclaimed white oak.

Fortunately, Wyatt and the Johnsons were friends who’d worked together before, and everyone survived the years-long process with relationships intact. “They had significant involvement,” Wyatt says, “along with blood, sweat, and tears. It was certainly not an easy building to pull off.”

Wyatt cites his chief influences as Greene and Greene, Henry Hobson Richardson, and Edwin Lutyens, with an appreciation for Italian Mannerism. “These are the ingredients that go into the mixing bowl,” he explains. “Combined with my own personal reflections, the owner’s wants, and what I’ve seen traveling, out comes something that’s fairly unique.” 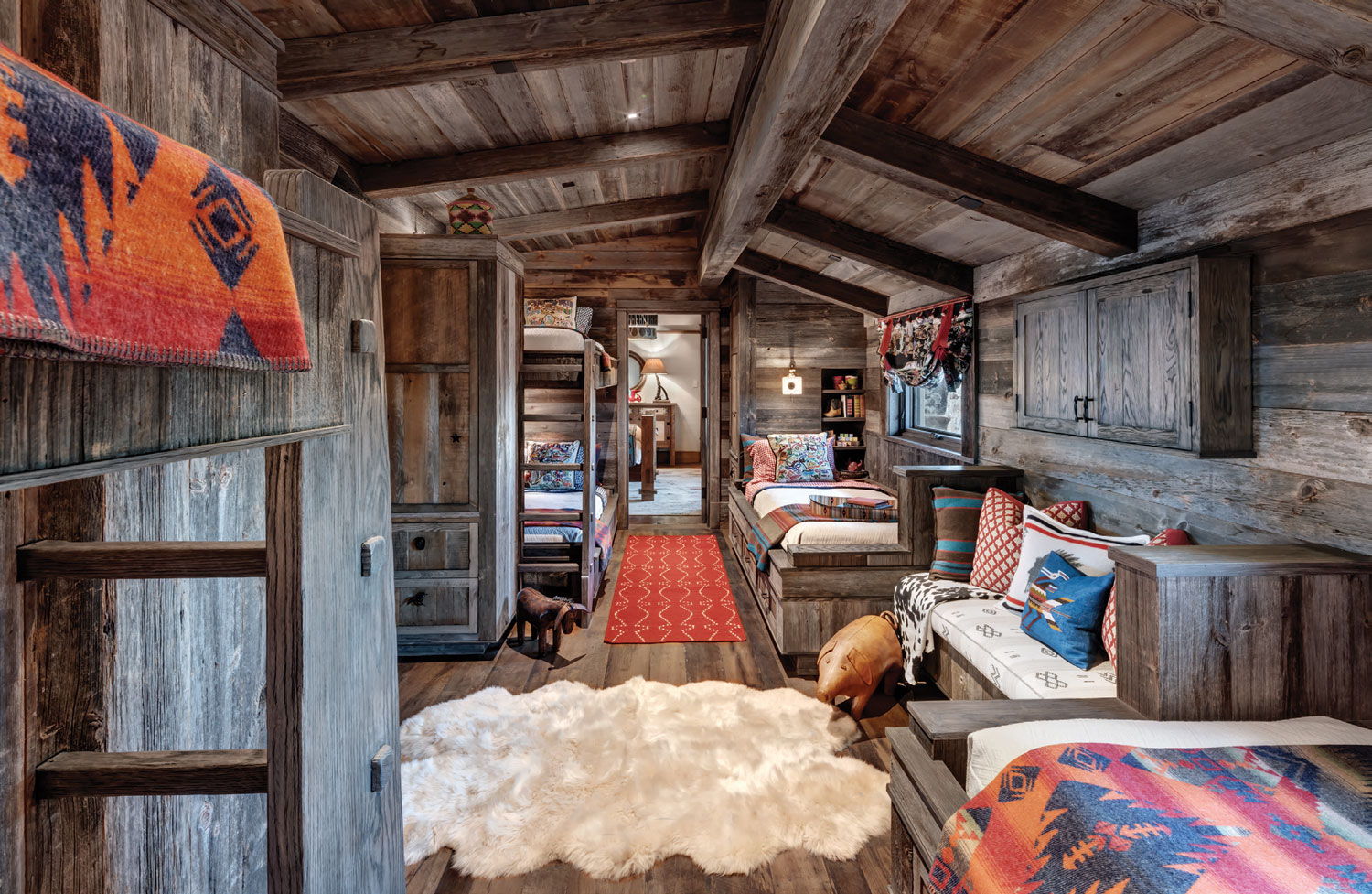 In a guestroom designed for kids, the reclaimed barn wood ceiling is lowered to create a hideaway. The room is replete with colorful Pendleton blankets, custom bedding, Abercrombie & Fitch leather animal footstools, and a sheepskin rug.

The project’s interior décor was originally described to Lasky as a “transitional-style ranch house,” and the initial presentation was composed of relatively mainstream furniture. “Then the owner’s sister-in-law, Debbie O’Reilly, happened to be visiting friends in Wyoming, and she saw some Thomas Molesworth chairs. Everyone loved them, and that changed the whole idea,” Lasky says. “This whole project was serendipitous in the way everything came together in this beautiful conclusion.”

Lasky had to educate herself on Molesworth, but she quickly fell in love with the work of the Cody, Wyoming-based craftsman who created rustic but colorful furniture — a bit cowboy-meets-Art-Deco — from the 1930s into the ’50s. 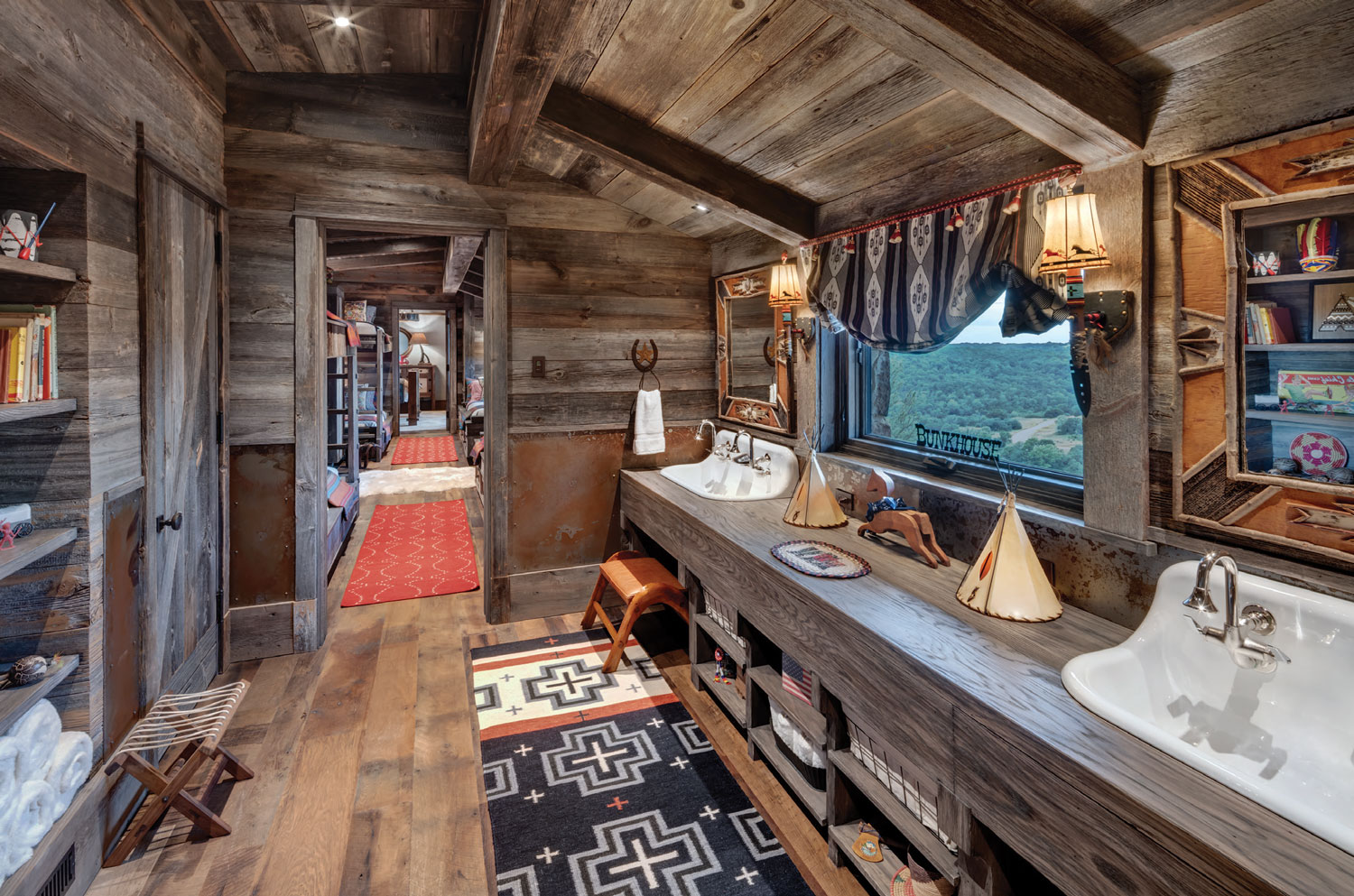 The lodge uses quite a bit of old-style exposed plumbing, as in these vintage-style sinks. The mirrors were custom-made by Don McAulay of Custom Rustic Furniture in Massachusetts.

Terry Winchell of Fighting Bear Antiques in Jackson Hole, Wyoming, one of the foremost Molesworth dealers, steered Lasky toward contemporary artisans working in the same vernacular; for example, Tim Lozier, Lester Santos, and John Gallis, all members of By Western Hands. At the same time the lodge was being built, the Cody nonprofit was coming together. Located in a recently completed building, By Western Hands is dedicated to maintaining the tradition of Western design, houses a museum, sells work by Western artisans, and provides workspace as well as classes. 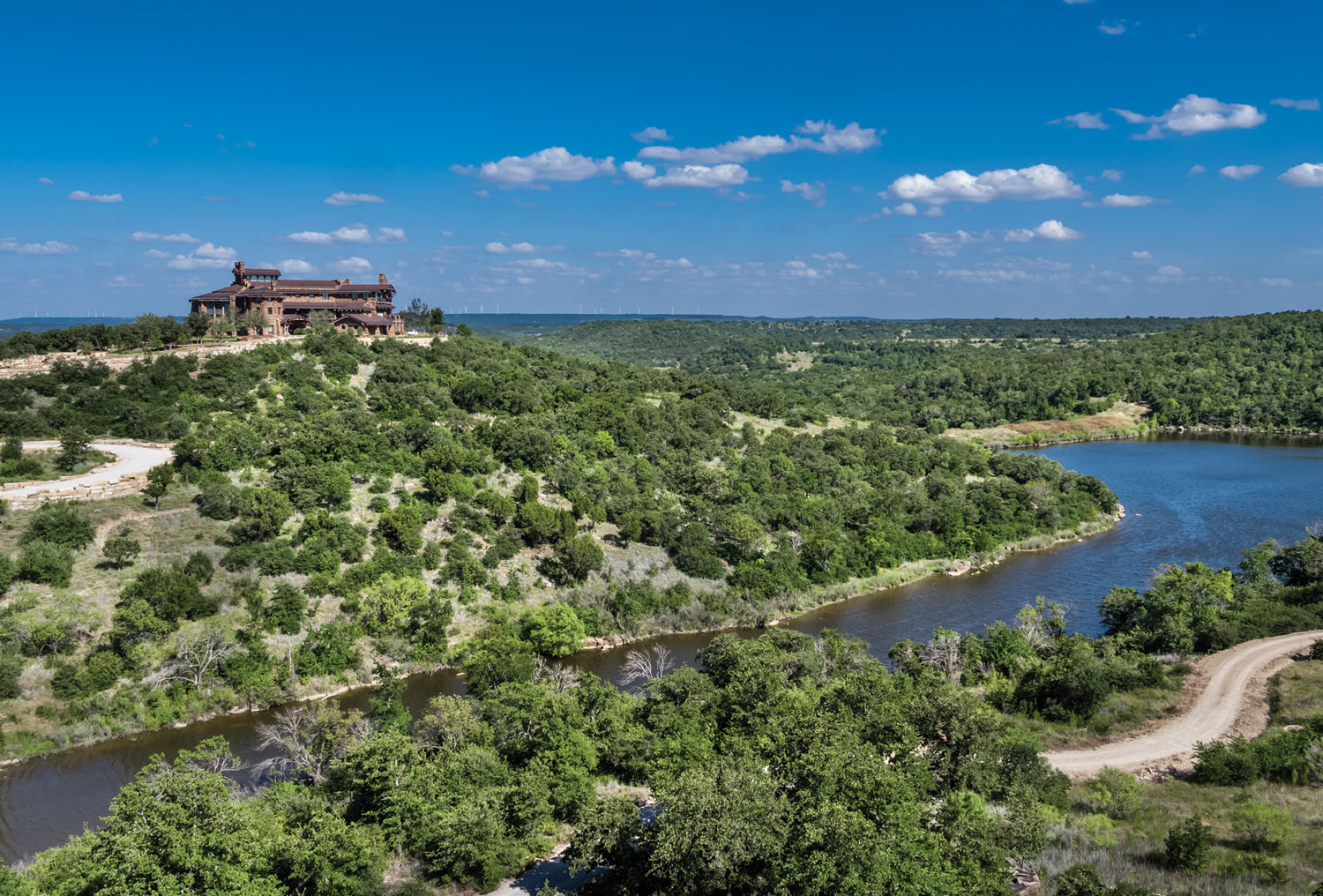 The lodge is approached by a bridge and offers awe-inspiring views over Cook Canyon Lake and the rolling ranchlands.

In addition to the Molesworth originals and commissioned pieces,  Lasky found items everywhere — in dusty flea markets, on Etsy, or by just Googling. In one bathroom, the fixtures are by a Ukrainian craftsman. Dealing with artisans taught the “type-A” Lasky to slow down. These weren’t Dallas showrooms. “Someone might not be able to send you a quote because they’re out finding sticks in the woods,” she says, laughing. “And then, they don’t know how many hours it’ll take to make the item.”

The result is an art-filled home with wonderfully surprising spaces and a dizzying collection of one-of-a-kind embellishments, including an echt 19th-century saloon with period appropriate bars and dark wood-framed art hung willy-nilly, the way it would have been in the Wild West. Just the coffered wood ceiling Wyatt designed in the great room will keep you rapt, as well as the lighting fixtures he drew, then commissioned. 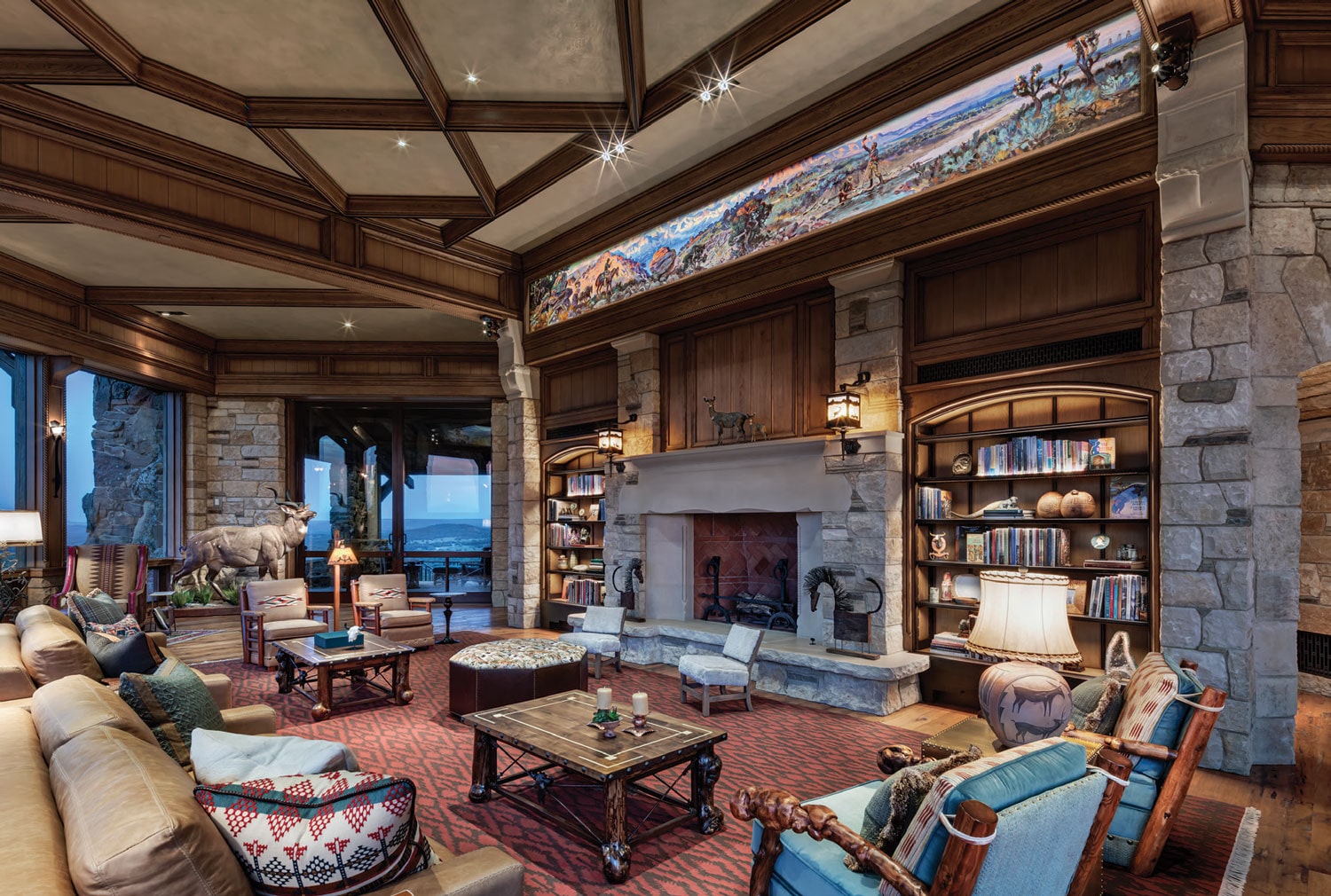 In the north hall, the murals are original works by Charles Russell. Custom double couches are by Eleanor Rigby Home, and the rug was custom-made by Holland & Sherry.

While the artisanal works are scattered throughout, the Rees-Joneses’ curator was involved in placing the art and each of the unique bedrooms is devoted to the work of a single artist.

Keeping with tradition, the working elements of the lodge are on the ground floor, including a professional kitchen. The gathering rooms are on the second floor and the bedrooms on the third.

The monumental effort that went into designing and building the lodge is evident everywhere, but there’s nothing austere about it. Amid all the extraordinary touches is a welcoming, comfortable country escape.

And, as Wyatt says, “the budget allowed for long-lasting materials. It’s a building that’s going to be around for a very long time.” 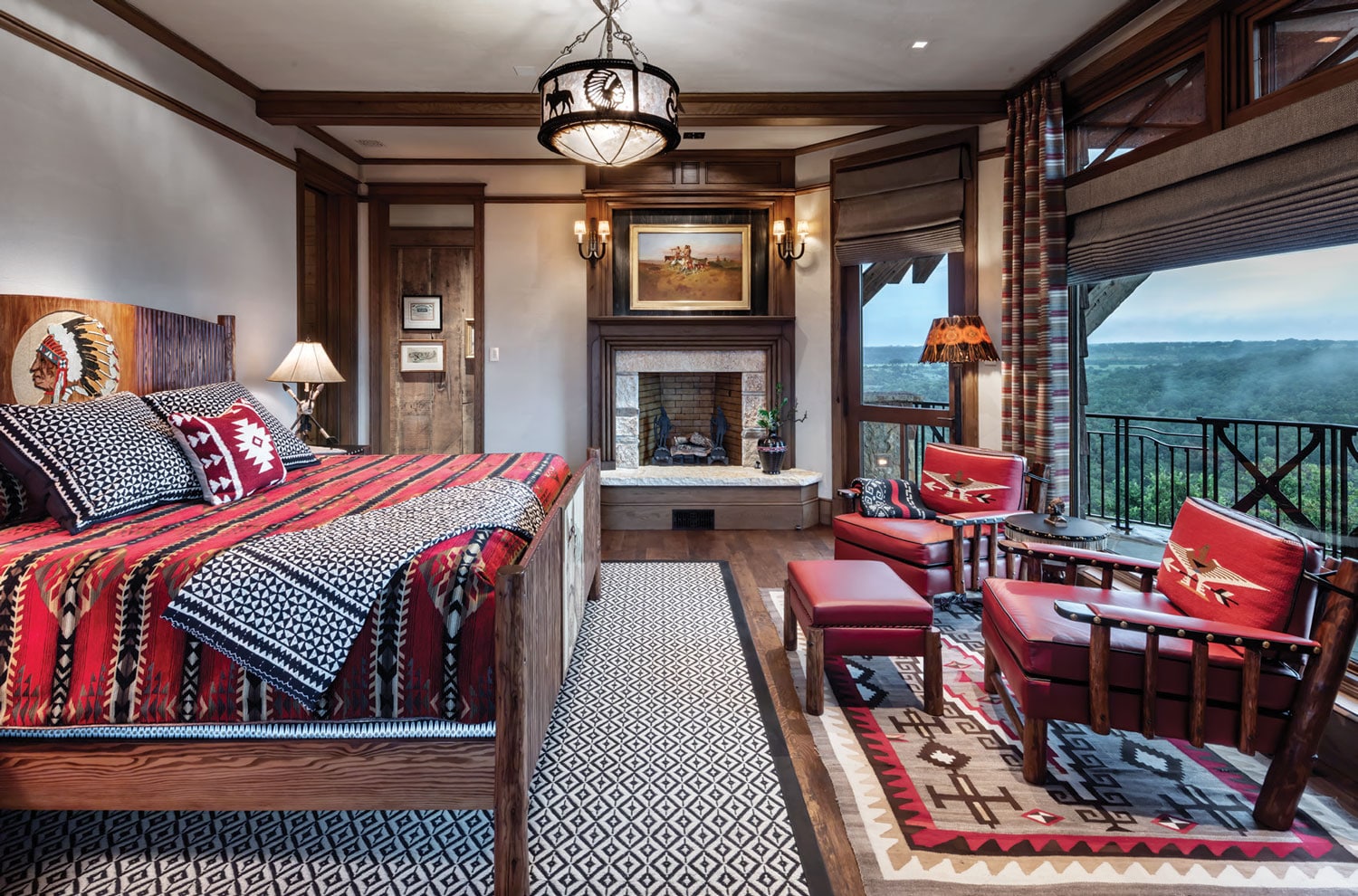 A guest bedroom is decorated with a custom chandelier by Frontier Ironworks in Buffalo, Wyoming, and Molesworth-style furniture was crafted by Lester Santos of Santos Furniture in Cody.