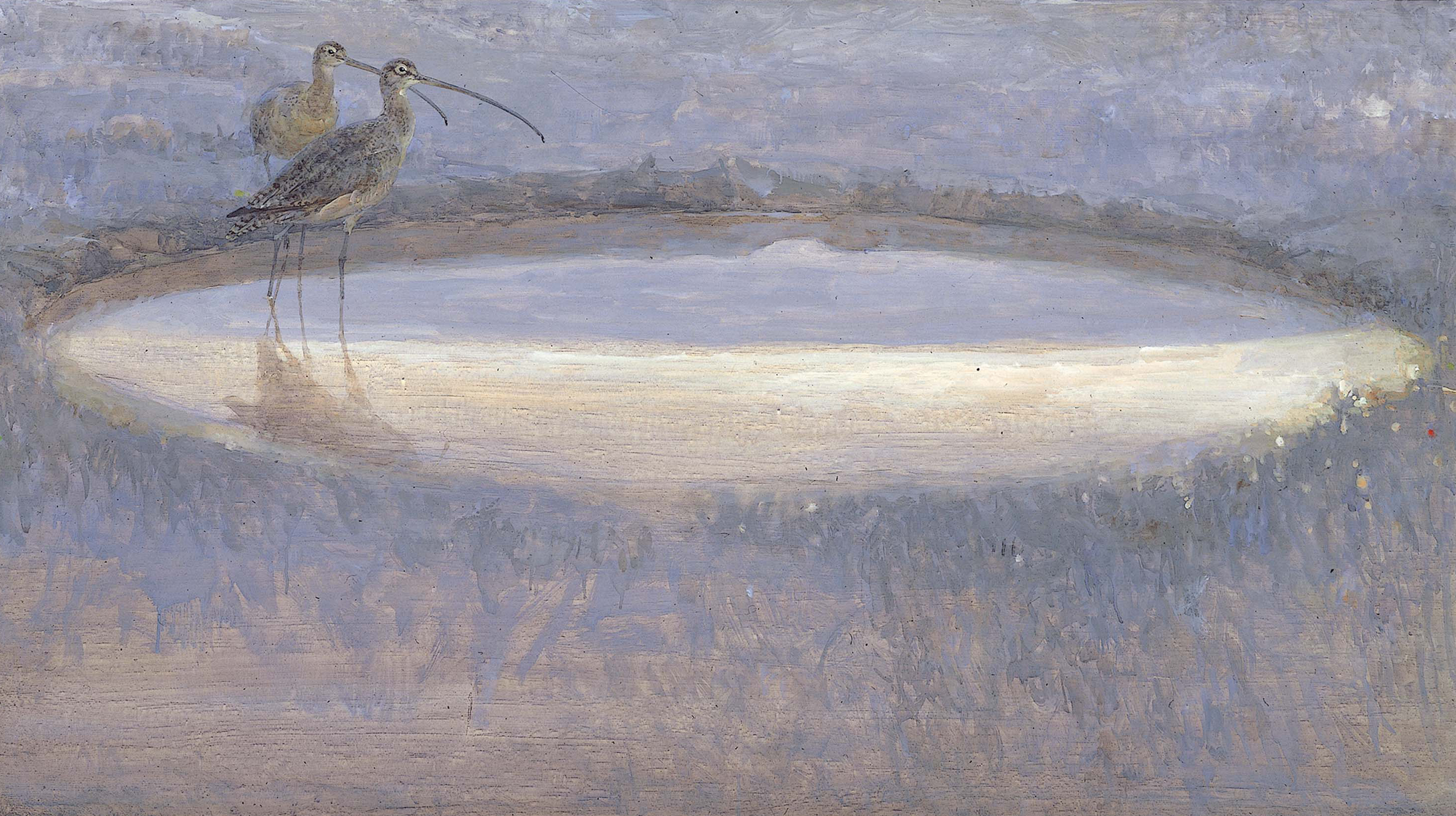 IN THIS AGE OF SERIAL VISUAL BORROWING, creativity that often appears captive to market whims, and flatwork imagery that’s as likely to be birthed by a camera lens as conceived by the human brain and heart, true artistic originality can be difficult to come by.

Inspired by Zen artisans of centuries past and flavored by his own personal encounters with wild creatures, the work commands respect from the most discriminating of collectors.

“Tom Quinn is an artist who, while absorbing broadly, pursues his vision singularly,” says William Kerr, a private art collector and cofounder of the National Museum of Wildlife Art. “As a man, he’s retro — my kind of guy. When it comes to the work he creates, it is his, unmistakably his own.”

More pleasurable than having a third party interpret Quinn’s bird and mammal scenes — many of which portray narratives of interspecies convergence — is to just behold them with fresh eyes. Works such as The Shrimp Pool, The Wind Readers and Swell Riders demonstrate the range of his design, his magical power with watercolor (though he is highly skilled in any medium) and a language articulated by few contemporaries.

“Authenticity in art isn’t hard if an artist simply gives room for his own inclinations,” says one of Quinn’s closest friends, Tony Angell, the legendary Seattle-based stone carver and sculptor. “Trouble is, many artists look at what seems to be working and imitate rather than create.”

Pointing to Quinn, Angell adds: “In the age of technology, the influence of the camera and digital manipulation is producing bodies of work that, to my eye, are DOA. No individuality, no point of view, and it’s reproduction rather than art produced through the artist’s power of moods, insights, courage and values. Basically, there’s no soul.”

Spirit and soul aren’t elusive in Quinn’s work. Effusively, they pour forth. In order to comprehend why, it helps to understand the complicated artist. And that, by itself, can be problematic considering how much Quinn, the reclusive sportsman, naturalist and neo-Luddite eschews being drawn into the limelight.

“He’s an anachronism,” says Ken Coburn, publisher of the critically acclaimed book, The Art of Thomas Quinn, that serves as the best retrospective of Quinn’s 50 years as a painter. “With mighty bricklayer’s hands he wields a feint little brush.”

Born in Hawaii in 1938, Quinn was the son of a naval intelligence officer who later became a private investigator. Quinn recalls strolling as a toddler along battleship row — the U.S. Navy’s Pacific fleet anchored at Pearl Harbor — prior, of course, to the fateful December dawn in 1941.

Hawaii might have been paradise. Soothing as the sub-tropical waters were, they held a quiet menace. From earliest infancy, Quinn suffered severe asthma attacks.

One doesn’t know the meaning of primal terror, Quinn says, until they’re gasping for each breath over periods of hours, sometimes days at a stretch. He still braces against the horrible memories of near suffocation.

“It turned out that I was deathly allergic to coral, but it wasn’t immediately recognized by the doctors who were treating me,” he says. “I was very sick. My dad put in for a transfer to the mainland because he believed it was the only hope of saving my life.”

The Quinn clan settled along the coast of Northern California and he got better. He hunted, fished, incessantly roamed the seashore and hinterlands, assembling menageries of wild animals along the way and sketching them. Nature has always represented Quinn’s physical and psychological refuge — as well as an artistic muse.

Irish Catholic, Quinn attended parochial schools. While he would draw any animal he set his hands on, he admits he wasn’t the most attentive student. He ran with a group of teenage boys whose mischief attracted the scorn of priests and nuns. One brother of the cloth informed Quinn’s mother that her son would never graduate from high school. A principal predicted that within 10 years he’d be a ward of the state at San Quentin Prison.

A voracious reader and student of history, Quinn says he discovered something about himself while reading biographies of Theodore Roosevelt and Winston Churchill, two men who suffered from debilitating illness as children and yet emerged with a solid core of inner strength that wouldn’t have happened otherwise. Roosevelt found solace in nature and Churchill savored his free time as a painter.

At art school Quinn heeded his own voice. He graduated with distinction, at the top of his class, from the Art Center College of Design in Los Angeles, intending to become a commercial illustrator. Unlike his subtle watercolor palette today, he painted straight out of the tube in oil and acrylic. Fellow students as well as faculty sought his advice. Hailed as a prodigious colorist, he landed covers of Car and Driver magazine, depicting a dueling Ferrari and Pontiac. The young artist headed to New York.

“The guy cut his teeth in New York City doing covers for Field & Stream and others before illness sent him back out west for his recovery,” Angell says. “He seems to have had a love of both fast cars and good whiskey before snarling over clichés and not suffering fools very well. He gave up his racing in middle age. Pursuant of better language and unusual speaking style, I always look forward to his inventing fresh metaphors or similes to make a point during one of our exchanges over the phone. As you can tell, should you read some of his prose, he has an economy in writing, haiku-like I might say, that echoes his painting.”

Under his command nuanced brushstrokes and floods of color ripple over his surfaces. Although Quinn is an exquisite draftsman, his sleek forms, in a sleight of hand, expand well beyond the boundaries of circumscribed lines. In terms of focal point, negative space brings balance, dissolving away any two-dimensional divisions between foreground and background.

“I am of a mind that traveling this road of reasoning brings a contact with some very fine company: the vast dark voids of Rembrandt, the humid pearlescence of Whistler or Turner, the atmospheric vacancies of Thomas Wilmer Dewing, the editing of Hokusai and Utamaro, and the astonishing washes of Mayusura Okyo,” says Quinn.

Many days for Quinn have involved walking behind retrievers (his favorite breed is the Labrador) in search of waterfowl and other game birds. In fact, in addition to his painting, Quinn has been heralded for his writing, penning a moving book about hunting dogs that prompted Sports Illustrated to serialize its first chapter. “It’s funny sometimes how we form opinions of people,” Quinn says. “I’ve had good friends over the years who are damned fine writers. After one of them read the dog book, his assessment of me changed. Suddenly, we were blood brothers of the written word where before he only thought of me as a painter.”

As an artist-outdoorsman as comfortable with a shotgun in his hands as a sable brush, Quinn holds mystique, attracting admiration from others who similarly subscribe to high-grade aesthetic sensibilities.

During high school, Quinn and the revered American landscape painter Russell Chatham went to rival campuses in northern California, yet each possessed a yearning to be outdoors. Eventually, their yen for art and the sporting life brought them together.

Not long ago, they went duck hunting together in the Sacramento Valley; although the birds weren’t present, their conversation centered on a museum, the Frick, which happened to be the favorite of each. Wall by wall, hall-by-hall, painting by painting, they moved through it via memory, sharing stories about their favorite works, filled with anecdotes about the artists’ lives.

In 1998, Quinn joined the pantheon of “master artists” at the Leigh Yawkey Woodson Art Museum in Wausau, Wisconsin. The esteemed distinction recognizes the finest avian artists of the last 40 years. “Tom has developed a point of view and has remained true to it in the best sense of the word because it makes for great art,” says Woodson director Kathy Foley. “His work has many similarities to poetry — in its sparseness and powerful punch — that takes your breath away.”

“Tom is uncompromising in his work,” Angell says. “He anguishes over one painting at a time and it may take months to do or not be done at all if it falls short. I’ve known him to take paintings out of their frames to correct something that he discovered after the work had been delivered to and finished by the framer. He’s his own best critic.”

Collectors often, over the years, have seen a work of Quinn’s they like in a museum, private collection or at auction. They’ve asked him to paint another, altering the new work just enough so that it couldn’t stand accused of being a direct replica. Quinn refuses, even when huge sums of money have been offered.

Short of shamefully plagiarizing another artist’s work, Quinn can think of no creative sin more personally revolting or cowardly than being deliberately self-derivative. Artists go stale, he says, when they endlessly recycle.

Quinn’s small output of new works can strain the patience of those representing him professionally, but Maria Hajic of Gerald Peters in Santa Fe and New York, Martin F. “Bubba” Wood of Collector’s Covey in Dallas, and John Marzolf at Broadmoor Gallery in Colorado Springs say it only makes them prized all the more.

Resonating with Quinn is the notion that, to stay vigorous, artists every once in a while need to embrace periods when their fields of creativity remain fallow, when impulses to execute are rested and the mission is total elemental absorption. Never taking an opportunity to breathe in his surroundings for granted, Quinn does this through hunting, bird watching, prowling museums and enjoying the company of his close friends.

He mentions John Steinbeck and the book A Life In Letters when the famous American author had finished the manuscript for The Grapes of Wrath but didn’t know if it was any good. “He felt all used up, he had given his total effort to the work and didn’t know if it was worth anything,” Quinn shares, adding that great art usually emanates from that mystical place commonly called “the zone.”

“The zone can be really hard to get into and once you do it’s like a time warp where everything stops and you’re held in the perfect neverending moment. When it’s good, nothing else matters but you can’t jump in or out of it at will.”

Such timelessness is a hallmark of Quinn’s work, Kerr says, which means his pieces never get old. He shares the story of how decades ago at the Prix de West Invitational in Oklahoma City, Quinn had submitted a piece that Kerr believes is another masterwork. But before he could act, a friend — a man who had mentored him as a conservationist — acquired it. “Ever since, I have tried all manner of approaches to encourage him to consider making a future gift to the National Museum of Wildlife Art,” he says, noteing that the painting would have a worthy place on the same walls where works by masters of other ages hang today and among Quinn’s watercolors already in the permanent collection.

Stephen Bodio, the sportsman, writer and naturalist, who penned an essay for Quinn’s volume of paintings, observed that Tom Quinn “offers portals to an ethic that may delight you, and to spacious places where delight and discovery are not uncommon.” 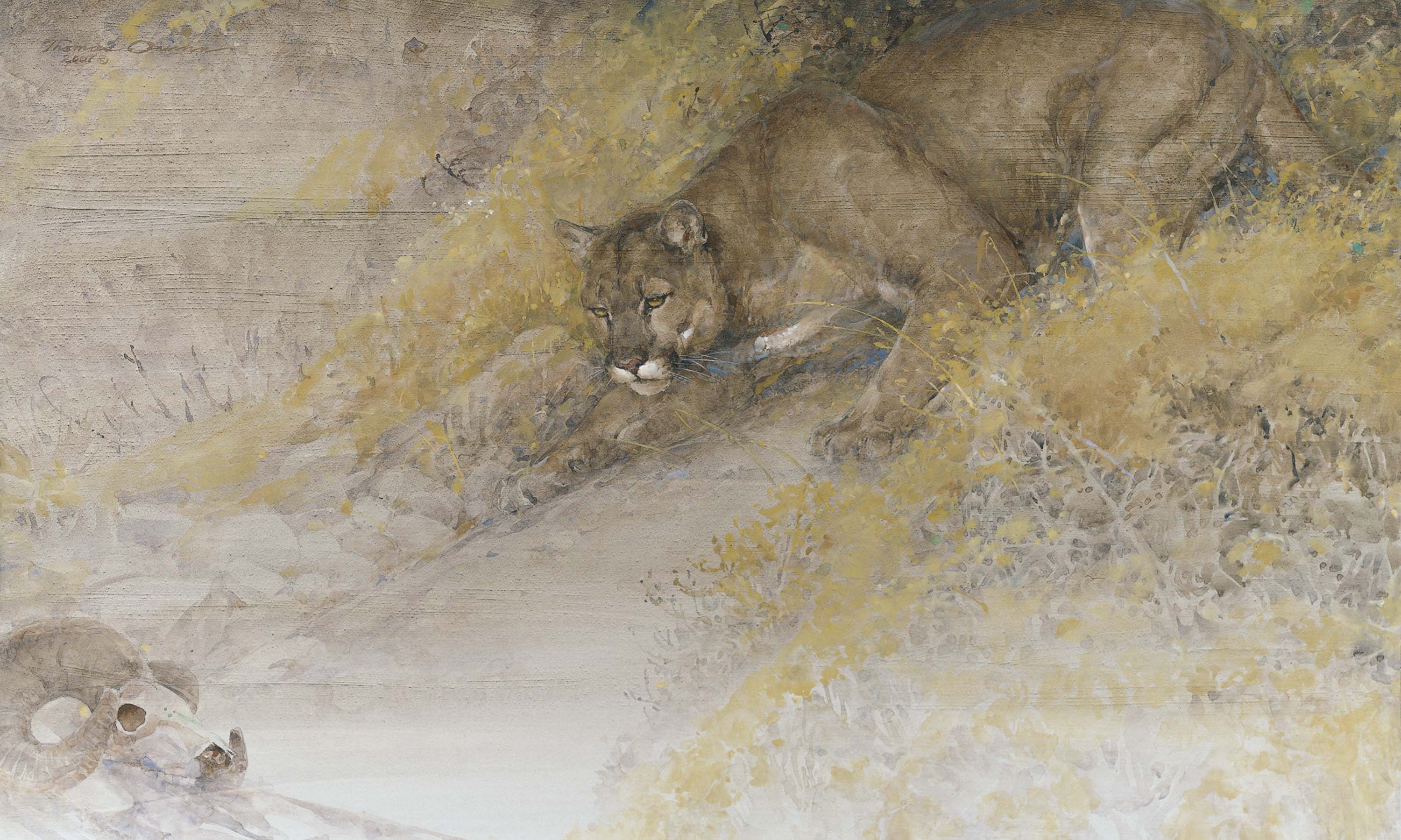 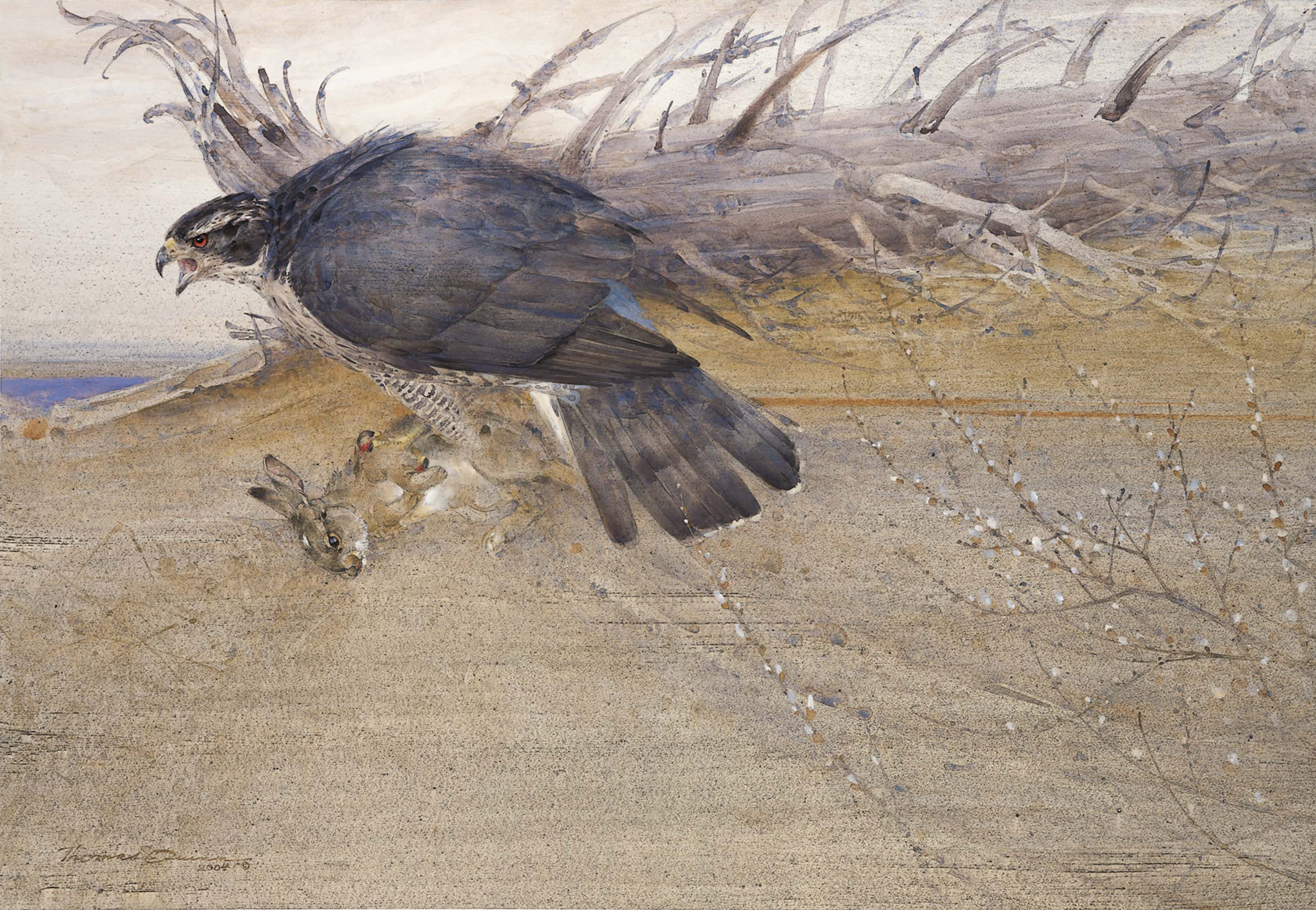 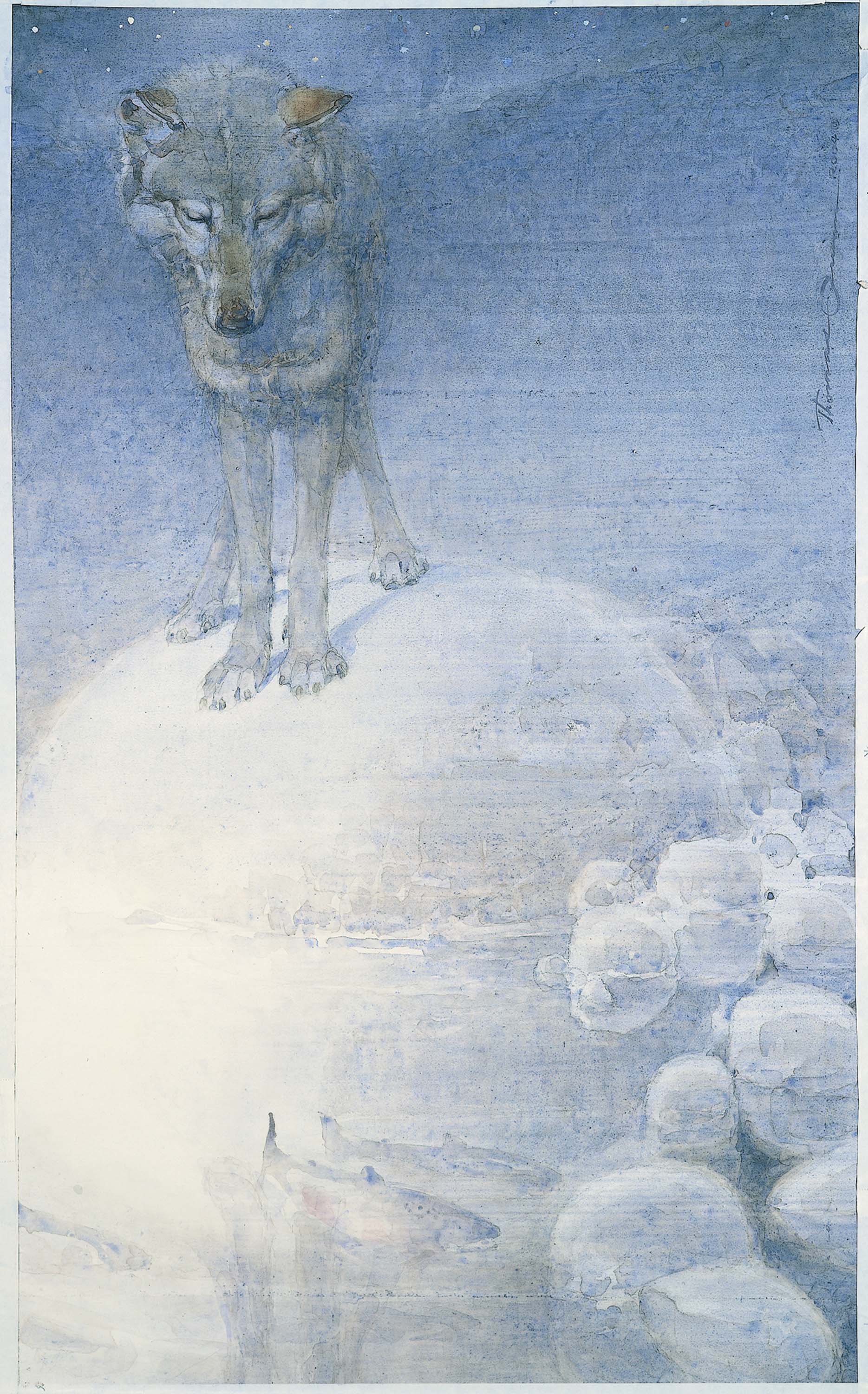 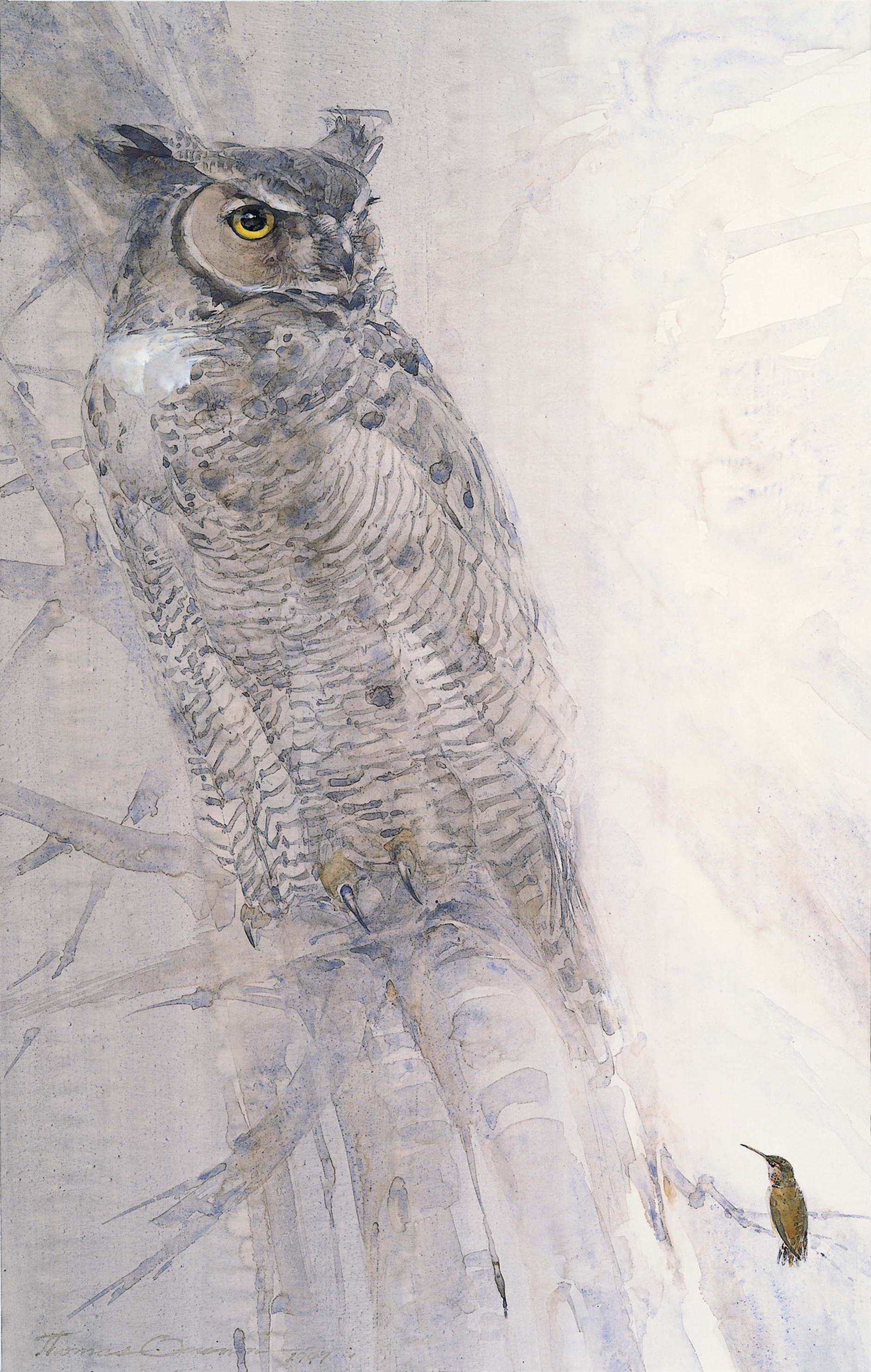